So you reckon the inside of the Land Cruiser is getting a bit too snug for those long camping trips? Looking for something larger with a go-anywhere attitude? Or maybe you just want the perfect rugged platform for your dream motorhome?

Well, Mercedes-Benz may have just the right expedition truck for you. Sure, the Mercedes-Benz Unimog has been around forever, but a new model has just landed in Australia: the U430. The baby of the mog range, it is as much a tractor as it is a truck, and it is essentially a tool carrier – something to mount all types of equipment to, from mowers to snow ploughs and more.

Its brother, the big 6x6 Zetros, ups the ante, but you’ll need a heavy rigid licence to steer it. The constant six-wheel-drive Zetros has a military background, although the Australian Defence Force has chosen to use MAN for its future 6x6 trucks. The Zetros, nonetheless, is still here as a niche, go-anywhere truck. 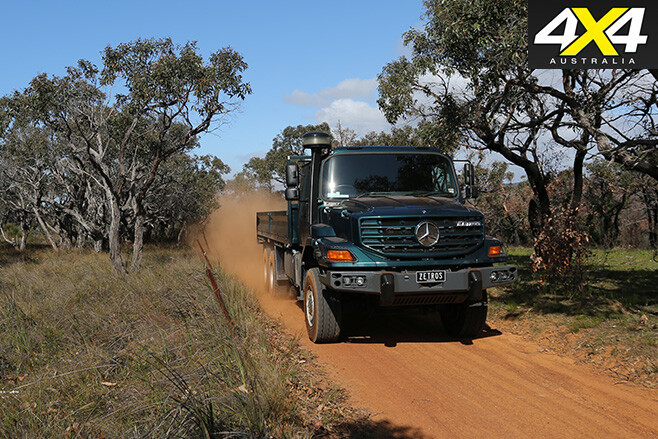 We took both trucks for a spin. The U430 Unimog was the first of the new models to land in Australia, and this one is being used as a spreader, so the drive we took it on wasn’t too gnarly. But we did do some serious off-roading with the big Zetros.

LITTLE BROTHER: U430 UNIMOG
The constant all-wheel drive U430 Unimog is powered by Benz’s Euro 6, 7.7-litre OM 936 engine, which creates 223kW and 1200Nm of twisty force. Behind the BlueTec donk is a dual-range, eight-speed, preselect, semi-auto tranny, which gets power to the dirt via the Mog’s famed portal axles.

The 430 we drove had also been optioned with CTI (Central Tyre Inflation) to help keep the little truck afloat in the muck. Another interesting feature is the Work Mode of the UG 100 transmission, which turns the semi-auto into a hydrostatic transmission for off-road work. This means no changing gears, or braking or using the clutch – just use the go-pedal. On road, the Unimog uses a semi-auto, preselect tranny. You select the gear on the armrest selector and then push the clutch all the way to the floor to engage the selected gear. It’s a little counterintuitive, but you get the hang of it pretty quickly.

With a couple of tonnes of lime in the back, we headed to a local equestrian centre so we could have a play in the grass. The U430 will take a 4.5-tonne payload with the spreader body on the back. Even with half a load in the truck’s tray, the driver can still feel a high centre of gravity as the Mog rocks on its coil springs when cornering.

The 7.7-litre engine seems to have enough huff to haul the little truck along, but with a vehicle like this it is all about the gearing. Driveline noise is surprisingly good and, on the open road near the little Benz’s 90km/h limit, the dominating sound is the roar of the tractor-like off-road tyres. 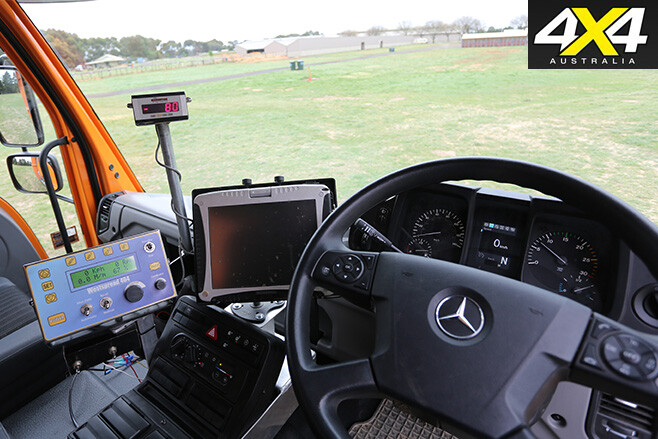 The U430 is available with a feature called Vario Steer, which means that the steering wheel and instrument cluster can be unclipped and shifted across the cab for dual-control applications. The machine we tested wasn’t equipped with Vario Steer, but the shaft configuration remained, which explains the layout. That said – the little mog steered fine both on- and off-road.

BIG BROTHER: ZETROS 6X6
The Mercedes-Benz Zetros 6x6 takes off-roading to another level. It’s kind of ugly, brutish and cool at the same time. The odd-shaped cabin means it will fit into the cargo hold of a military transport aircraft; indeed, someone from Daimler recently suggested that I could drive one out of an aeroplane. I’m not sure what they were trying to say to me... The Zetros is a constant all-wheel drive that uses a two-speed transfer case, which gives you a choice of 1.00:1 for road use or 1.69:1 for belting around the bush. All axles use a planetary hub-reduction drive and diff-locks are standard, front, center and rear. The whole kit and caboodle sits on steel parabolic springs. This all means it’s a pretty tough character.

The trouble is, it’s a very hard truck to review, because it’s hard to find the limitations of a vehicle that is designed to go anywhere. So, as I rolled along the freeway at 90km/h at 2000rpm, where the Zetros felt most comfortable, I began to fantasise about what I could do with the beast. Driving though a house seemed like fun, but not many people would have a sense of humour about that. Pushing over trees for laughs wouldn’t win me many friends, either.

Out in the bush, this thing ate any obstacle we pointed it at. It flattened mounds of dirt and climbed hills that would make a Land Cruiser squirm. In fact, it became very clear that the only way we were going to unsettle this thing would’ve been with an improvised explosive device or some sniper fire. The combination of chassis flex and parabolic springs did an excellent job of keeping all six tyres on the ground while roaring through the scrub. The Allison behaved quite well and is a nice, quiet installation. It didn’t appreciate being fiddled with in the bush, however, and it was hesitant to make manual downchanges at times. But it’s hard to ignore the tractability benefits of having a torque converter in an off-roader like this one.

Having a bonnet out front makes for a much better ride than with a Unimog, and cab access is also very easy for a big off-roader. The only downside is visibility, compared to the mog, but it’s also a much bigger truck. The accelerator pedal position is a little awkward, too, as the switch to right-hand drive means that there’s some wheel-arch intrusion under the pedal area. 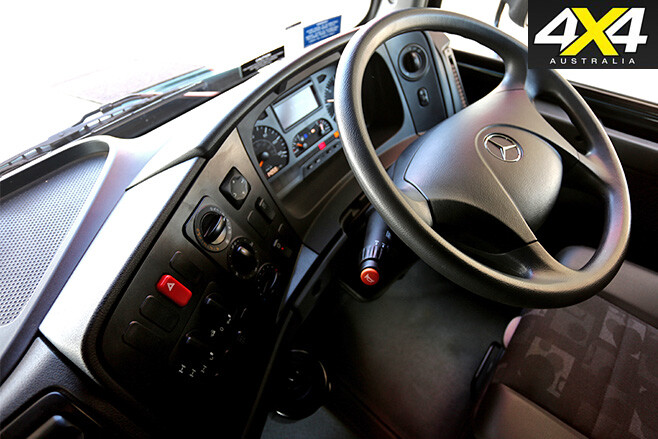 But, to be honest, I was too busy hanging on the steering wheel and making juvenile whooping noises to notice. In between evil chuckles I even managed to notice that the Benz donk did a nice job of hauling the Zetros down rutted tracks and up hills. And you can throw it out of a plane.