WHILE Mercedes is busily testing the first all-new G-Class in almost four decades, the outgoing model is saying farewell with a very bold statement: a stretched landaulet that goes by the name of Maybach.

With an impressive silhouette that makes the prototype Rolls-Royce Cullinan look like a Smart Fortwo, and a level of luxury that’s way beyond what we’ve seen in the Bentley Bentayga, Mercedes-Maybach claims it to be the ultimate SUV. Period!

Riding the gigantic G-Class is truly elevating in two ways: Literally, because Mercedes is using the same portal axles that we know from the AMG G63 6×6 and G500 4×4² variants, in combination with mighty 22-inch wheels. That raises ground clearance to almost 500mm and lifts the driver higher than in any other stock SUV on or off the road. While going through the African jungle on a luxury safari experience, you feel more like riding an elephant than being stuffed into a tin can on wheels. And figuratively, because stepping up the electrically powered running boards is like stepping up in society and being king at least for the day. Since Mercedes wants the Maybach Landaulet to be the cream of the crop, the engine choice was easy: the most powerful one they have in stock. So, once again, the G-Class uses the V12 Powerpack that we know from other AMG 65 models, just with a nobler, understated sound. And, as it turns out, it’s definitely the right choice. Because neither the Landaulet’s 3.3 tonnes or its shipping container-like aerodynamics faze the twelve-cylinder much.

463kW and 1000Nm are more than enough for a very smooth and effortless ride. And even if there are a lot of cheaper SUVs with better acceleration times and higher top speeds, it’s an impressive, heart-stirring experience to pilot this giant from 0 to 60mph in less than six seconds, or to push it up to 112mph (180km/h). The faster you drive it, the more grateful you are for the 300 additional millimetres of track width and the stretched 3428mm wheelbase. Finally, the G-Class no longer drives like a frightened, wild animal on a game drive. Instead, it’s become as secure and dignified as a charging rhino. 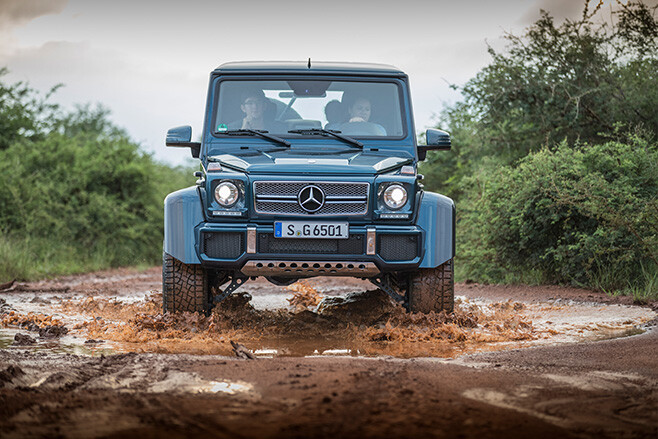 But as fascinating as the drive might be, it’s even more captivating to sit back one row and let someone else do the work behind the wheel. There is simply no other SUV and no convertible with as much backseat comfort as in this Landaulet. The private jet-like comfort starts with massaging and air-conditioned seats from the S-Class that can be reclined into a bed position. It continues with increased leg room, a bar complete with silver champagne flutes, and an impressive infotainment system. This backseat can quite easily be considered the most luxurious sunbed in the world. And to avoid people peeking in and seeing your belly button during that intimate ride into the great wide open, you can raise a roll-up partition between yourself and your driver while letting the roof down – both at the push of a button.

But privacy may not exactly be what the typical buyer of this type of vehicle is looking for. In which case, this Maybach is also the perfect choice. One just needs to stand up, grab the massive handles that you already know from the dashboard and stick your head out of the giant roof to feel like the pope on tour. The Maybach Landaulet might be the most comfortable and promising G-Class ever, but it’s also one of the most disappointing – at least for anyone showing up after the first 99 lucky customers have put in their order for one of these limited edition SUVs. After that, no more Maybach Gs will be built, regardless of how much money one puts on the table. And even if the estimated $750,000 price tag makes the Maybach G650 Landaulet the most expensive Mercedes in the line-up, they won’t have any problems selling them.

However, the sad and frustrated can take some comfort in knowing that the next generation G-Class is not far away. And even though it may not be as wide and generous as this regal ride, it will be the most comfortable G in history. At least for us mere mortals.

Want more? Click the gallery above for more images...