Much has been said and written about the coil-spring Navara dual-cab ‘NP300’ (or D23) that arrived here in mid-2015, not all of it complimentary, especially with regards to its heavy load and tow abilities, and much of it about the subsequent suspension revisions for the 2017 and 2018 models.

Meanwhile, flying under the radar, and among a host of coil-spring Navara models, has been a solitary leaf-spring dual-cab: the RX cab-chassis. This is the base-spec model in the Navara 4x4 dual-cab range, something that’s pretty obvious given its steel wheels, lack of side-steps and its work tray. 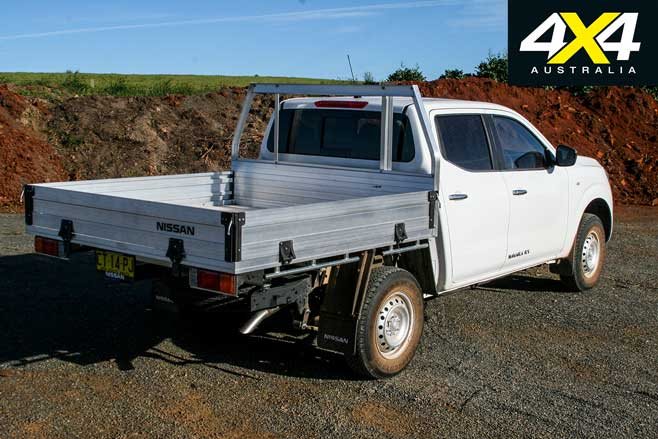 Not that the steel wheels or lack of steps should put you off, and if you did want a smarter-looking and more aerodynamically efficient ute it wouldn’t be hard to pick up a factory tub, given so many are discarded from higher-spec models to fit work trays.

You can buy an RX with a factory tub, but like the more expensive SL, ST and ST-X Navaras, it too comes with coil springs at the rear.

The RX cab-chassis comes standard with a six-speed manual, but our test vehicle has the optional seven-speed automatic, which means a $41,350 sticker price, or around $46K on road, tray included. 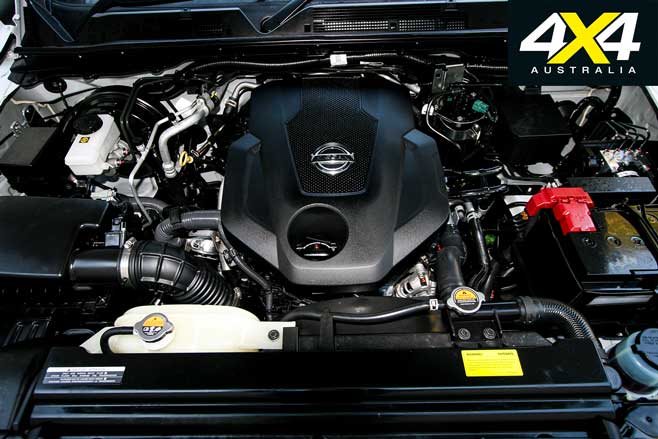 As well as only being available as a cab-chassis, the leaf-spring Navara’s other single-model limitation is that it only comes with the less powerful of the two 2.3-litre four-cylinder diesels on offer in the wider Navara range.

The RX’s engine claims 120kW and 403Nm, while the more expensive Navaras get the 140kW/450Nm engine, the difference being in the turbo arrangements. Where the RX has just one turbo, the higher-spec models get a more sophisticated and complex bi-turbo arrangement. Both engines are sourced from Nissan’s alliance partner Renault and were originally designed for commercial (delivery van) use rather than passenger-car use, so that should bode well for durability.

On the road the RX’s engine offers generally effortless and relaxed performance that’s helped by the attentive and slick seven-speed automatic and not overly tall final-drive gearing. The engine’s low-speed flexibility is surprisingly good and feels to give nothing away to the bi-turbo variant except when pushed hard, such as overtaking and on long, steep hills.

This engine isn’t the last word in refinement, but it’s smooth enough and not notably noisy. Perhaps even quieter than the bi-turbo variant on wider throttle openings. 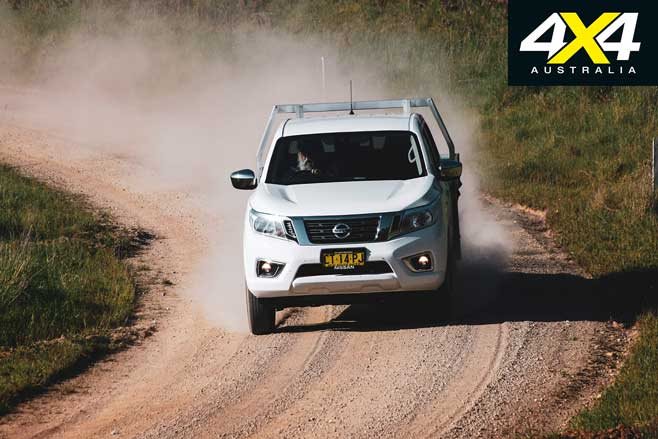 If you were thinking the RX’s leaf springs would translate to a firm – even hard – unladen ride, you’ll be pleasantly surprised. In fact, the unladen ride is surprisingly comfortable, the suspension well matched front-to-rear and the steering weight and feel better than you’d expect from a ‘work ute’.

The rear springs are a four-leaf design (including one helper leaf) and have vibration damper blocks fitted fore and aft on each spring pack.

The relatively narrow and tall (205 R16) light-truck tyres aren’t the last word in on-road grip but they no doubt contribute to the surprisingly pleasant ride quality, offer less bump disturbance on rough roads and provide good cut-through on loose gravel. 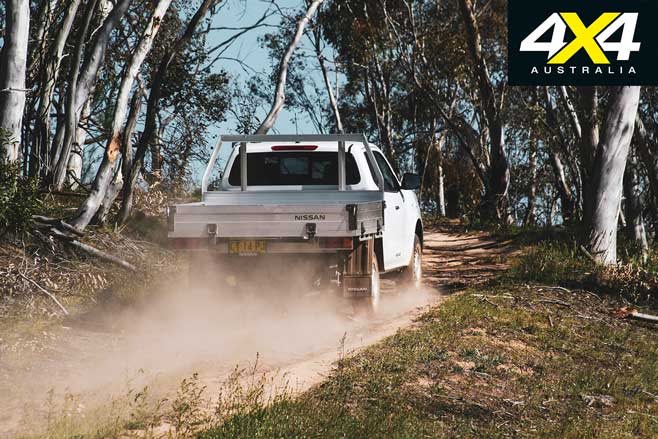 The light-truck tyres have plenty going for them off-road in terms of damage resistance, but the highway tread pattern is the weak link in their off-road performance, especially in mud. Fitting slightly wider tyres would also provide better floatation on soft surfaces.

Unlike more expensive Navaras, the RX doesn’t get a rear diff lock, but it does have electronic traction control and there’s also a surprising amount of articulation at the rear axle. In fact, the leaf springs look and feel to provide more articulation than the coil models; although, that wouldn’t be hard as the coil-spring setup doesn’t provide a notable amount of travel.

Otherwise, what you see is what you get. The RX has reasonable but not class-leading ground clearance and a conventional part-time dual-range 4x4 system. The seven-speed automatic offers tip-shift ‘manual’ control and a low first gear, which helps off-road driveability even in high range. Courtesy of this low first gear and the deep low-range reduction, the crawl ratio is a handy 44.6:1. 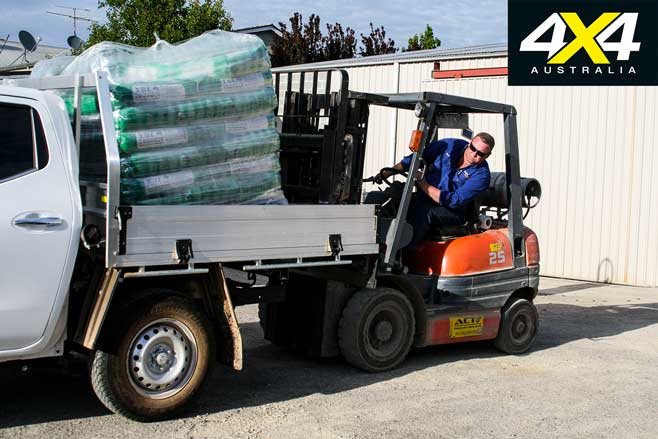 Without a towbar fitted to our test vehicle we couldn’t conduct a tow test, but we did test it for load carrying by loading 800kg in the tray. This 800kg payload is a standard load we use for maximum payload tests for all dual-cabs, remembering once you add a driver, passenger and towbar you’re around 980kg payload, effectively a maximum working payload for most dual-cabs – even a little over maximum for some. 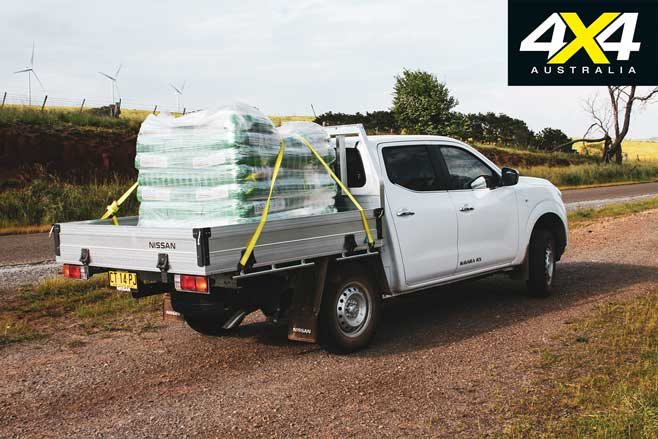 With the 800kg in the tray the RX dropped 80mm at the rear axle line and came up 25mm at the front axle line, which is a slightly better result than a coil-spring Navara with the same load onboard, but still a more severe attitude change than the best load-carrying utes.

On the road the RX carried the load reasonably well but still felt a little light in the steering and did bottom-out to the bump stops at the rear over bigger road irregularities. It’s still much better with 800kg onboard than the coil-spring Navara was in its first iteration, and it generally feels more solid than the latest iteration coil-spring Navaras without being up with the best load and tow utes.

Power-wise, too, the RX felt the extra 800kg as you’d expect but still got the job done. If you were to tow a full 3500kg, that’s when the more powerful 140kW engine would help. 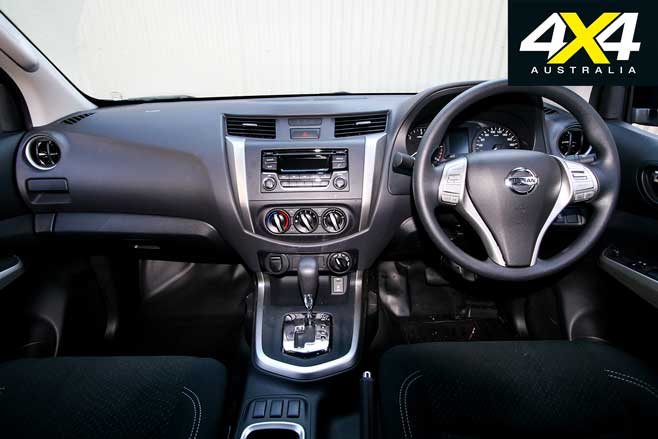 The RX’s vinyl floors and the basic dashboard (no big touchscreen) confirm that this model grade is more work ute than recreational/family ute, but, still, the vinyl floors have benefits over carpets and the RX’s equipment (see ‘What You Get’ on page 34) covers all the basics.

Like other Navaras, the RX’s cabin is among the smaller of the dual-cabs (along with Triton and Hilux) but is still roomy and comfortable enough even if the back seat is a squeeze for three. There’s no reach adjustment for the steering wheel either (tilt only) but the RX still provides a comfortable and roomy driving position. Height adjustment for the driver’s seat is a nice touch.

The RX comes with seven airbags (front, side, curtain and driver’s knee) and the usual suite of electronic safety kit including stability control, traction control and ABS brakes. Convenience features run to steering wheel cruise-control and Bluetooth phone connectivity, while a six-speaker audio system with AM/FM radio, CD and USB, iPod and AUX jacks takes care of entertainment. Cabin features also include an opening glass panel in the back window, and rear privacy glass. 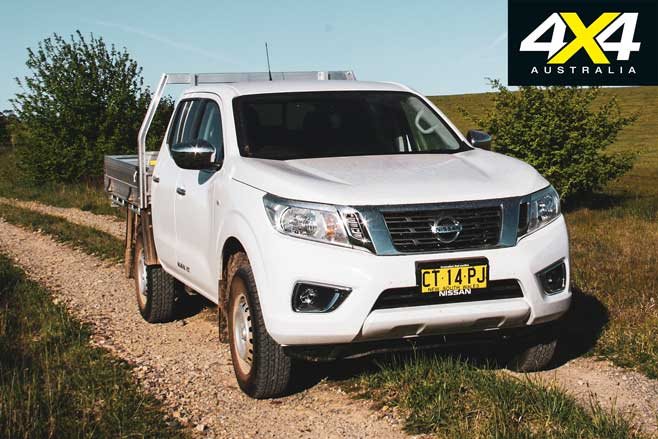 The RX is decent to drive and does most things asked of it well enough, and all at a good price. You could argue it’s the best value Navara. However, it still doesn’t do the job of a heavy-duty load and tow ute all that well. Given Nissan has gone out of its way to build a leaf-spring Navara variant in the first place, why not make it a serious heavy-duty load hauler? Perhaps throw in the 140kW engine as well, which would make it even better for towing or carrying heavy loads. 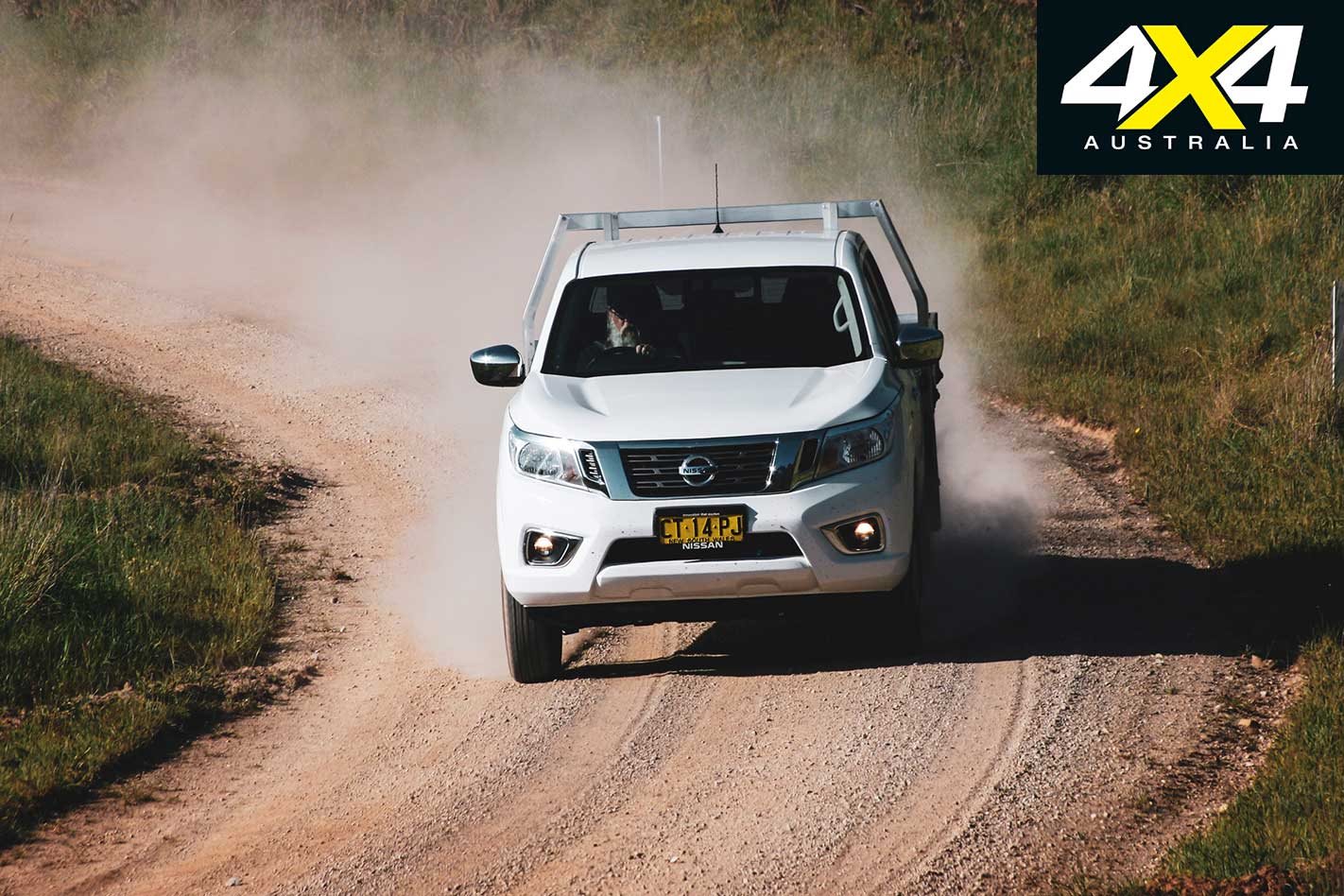 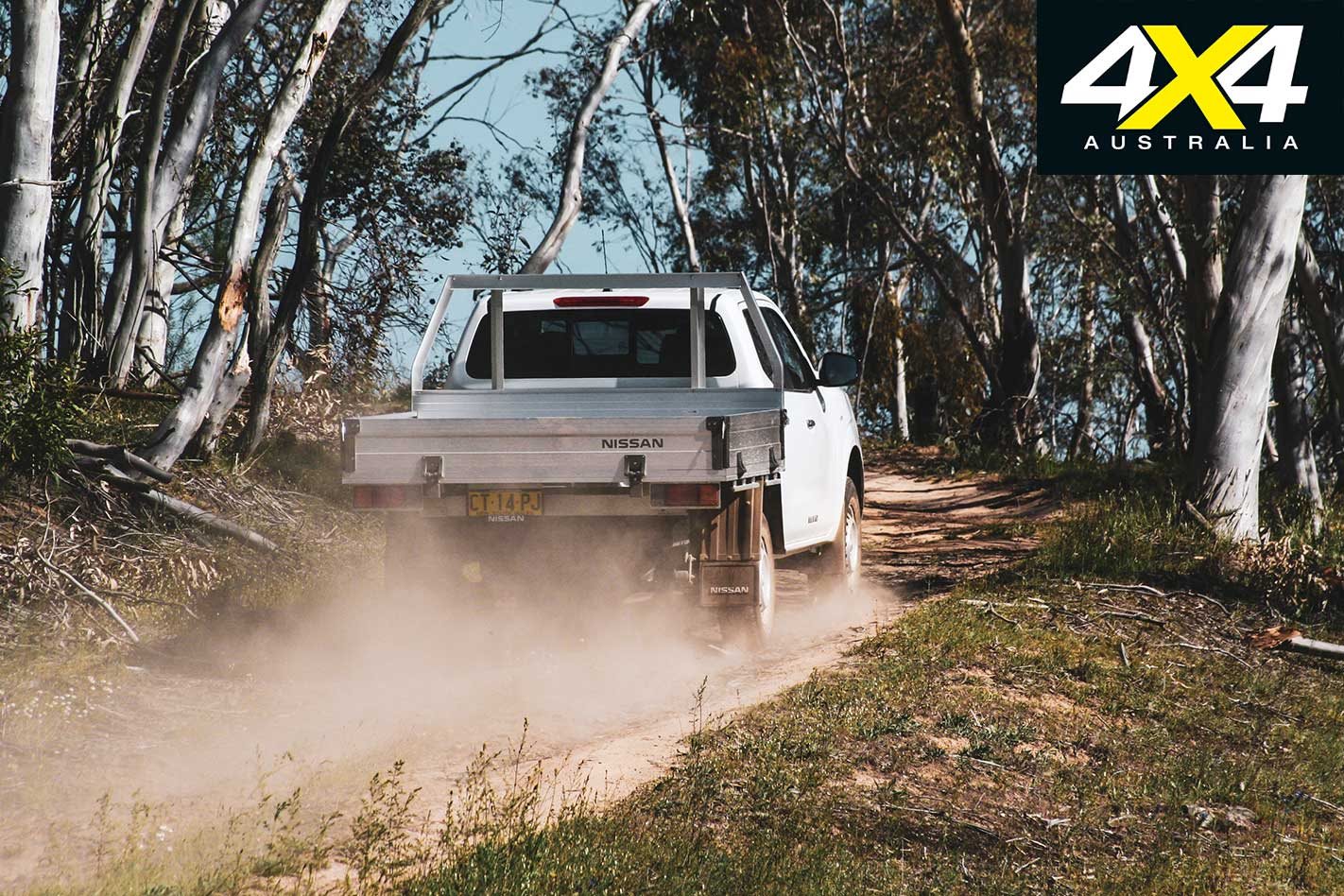 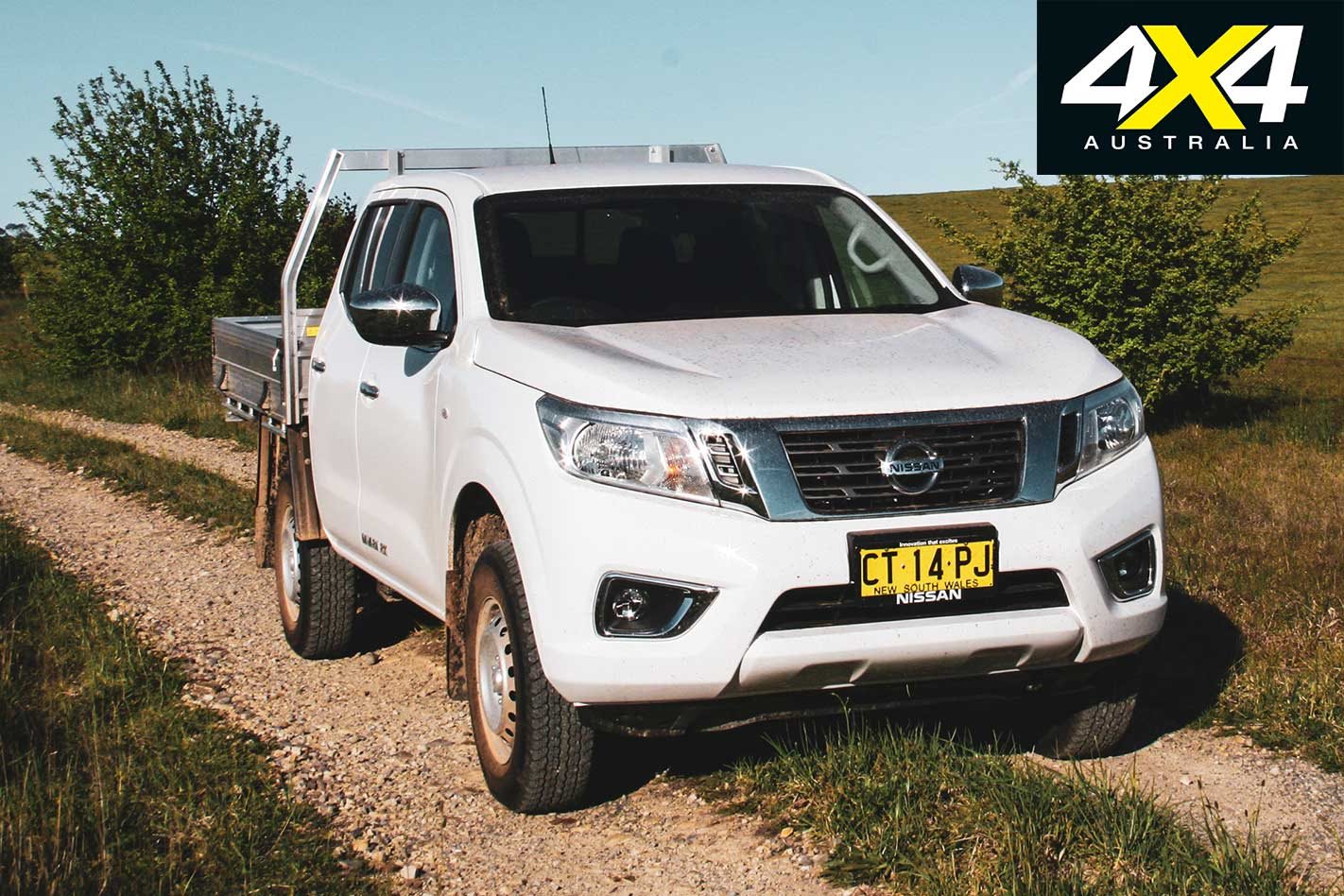 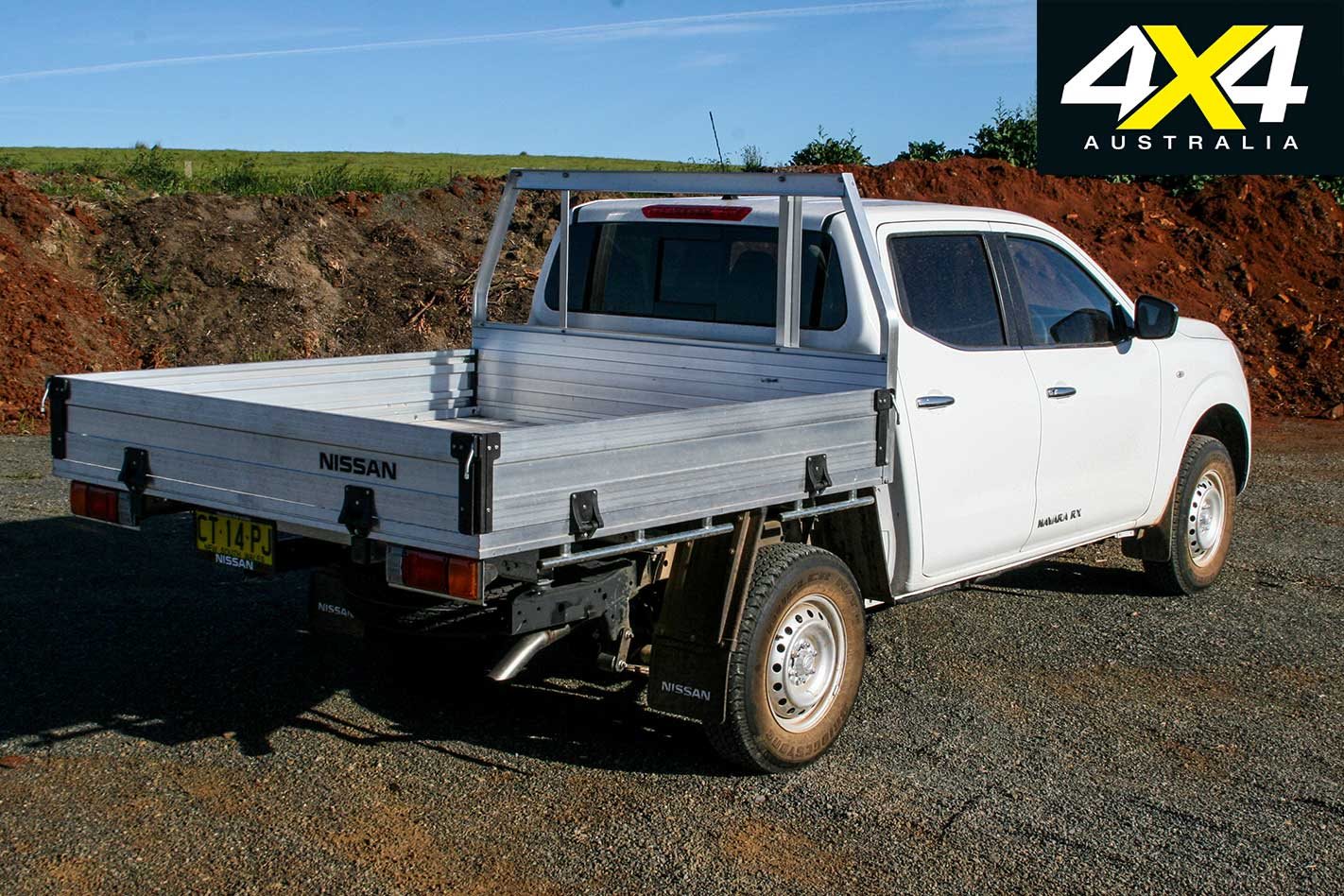 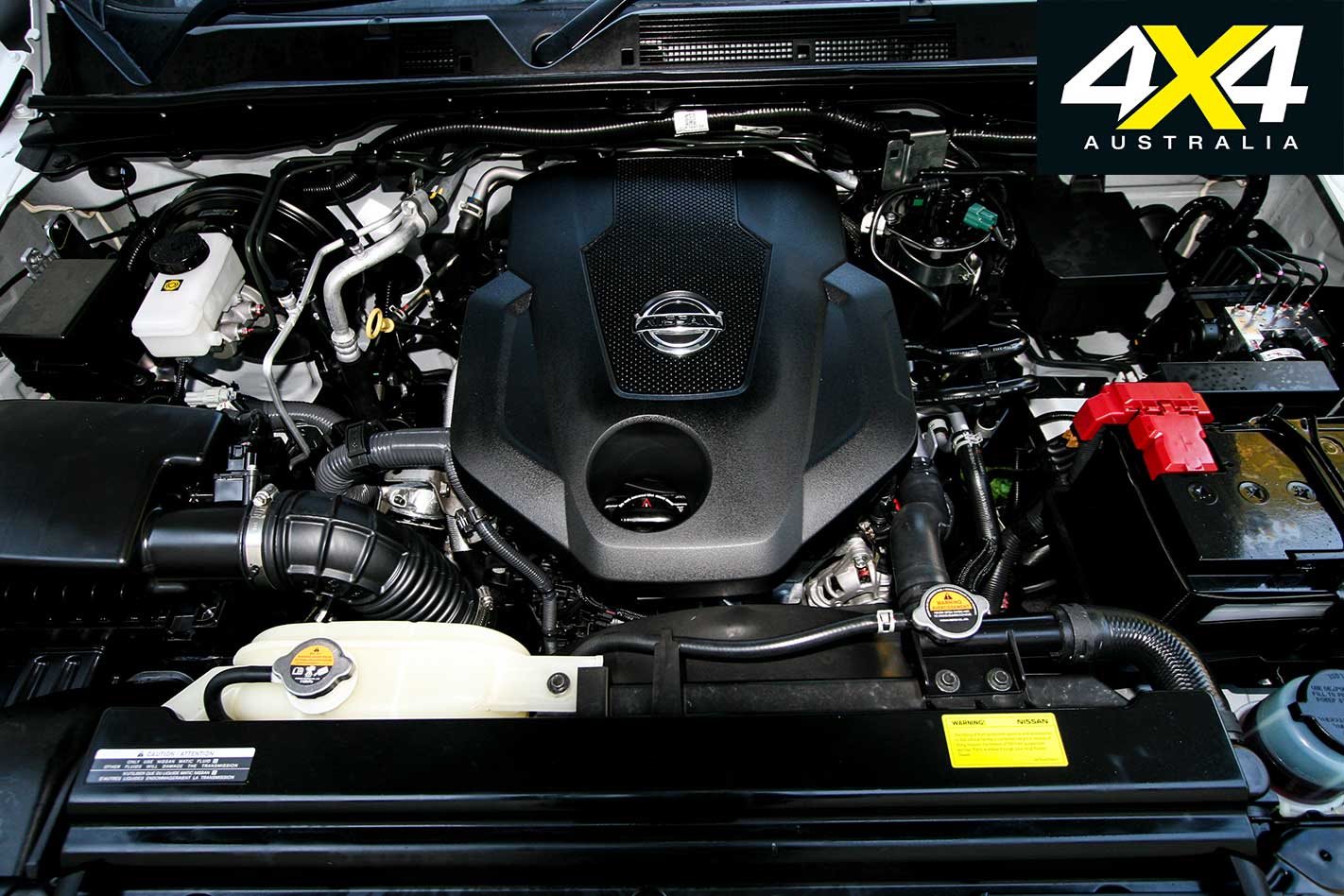 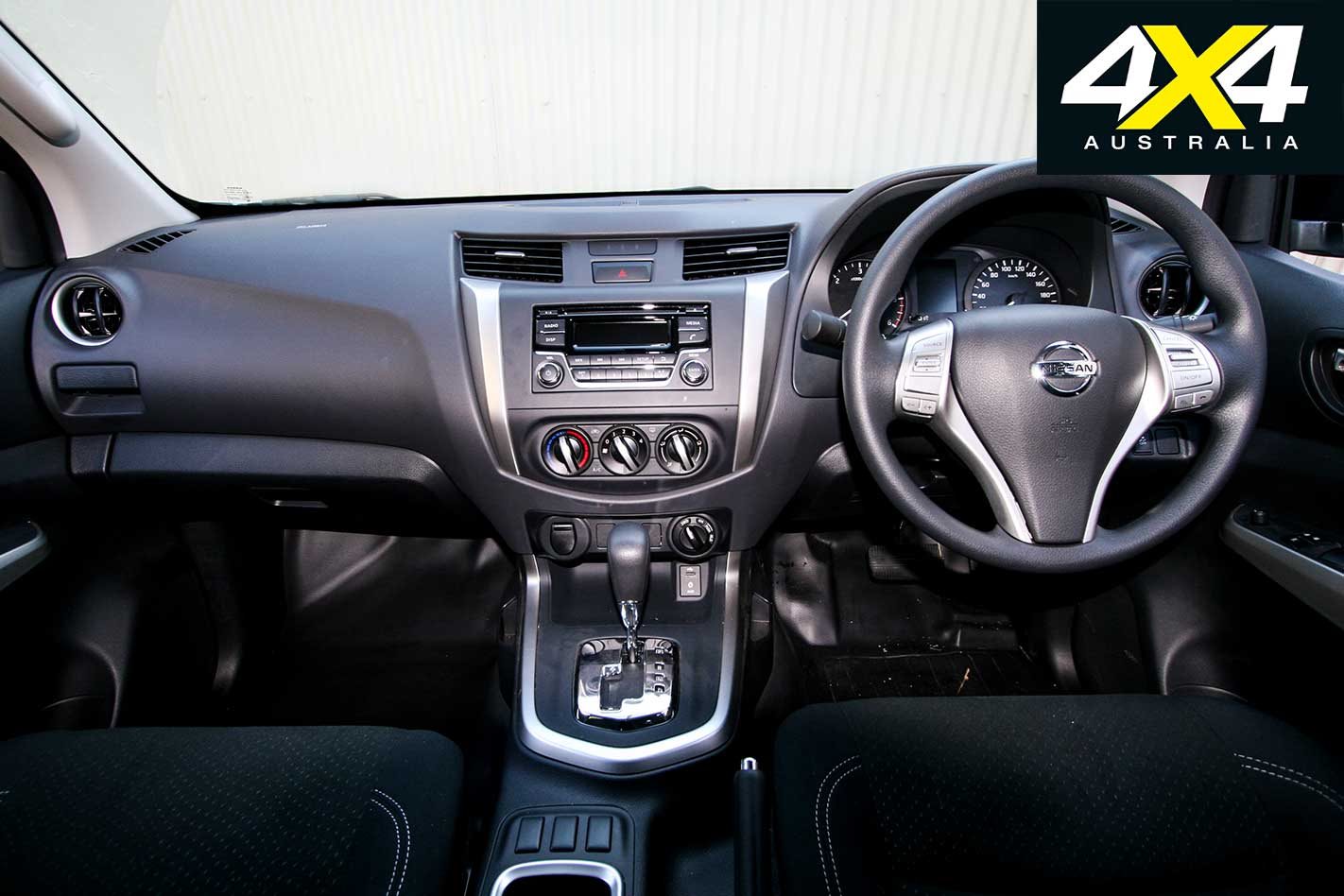