The ever changing landscape of Western Australia’s north coast was no match for the Isuzu D-Max and Mu-X.

On a trip up the north-west coast of Australia, 4X4 Australia and CamperTrailer Australia magazines joined forces to see just how far Isuzu’s D-Max LS-U and Mu-X LS-T, with camper trailers in tow, could get us.

This article was originally published in the October 2014 issue of 4X4 Australia.

Both these four-wheel drives have favourable reputations; the second-gen D-Max is running in the top 10 best-selling 4x4s of 2014 while its younger brother, the Mu-X, launched in 2013 is quickly finding its place in the Australian market, and is regarded as a strong and reliable family 4x4. 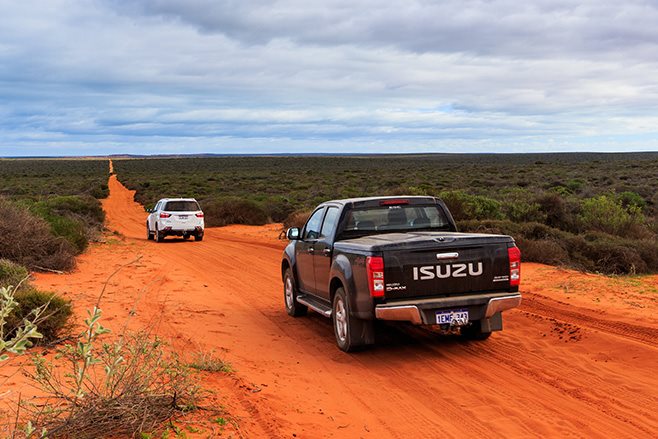 The Mu-X is the seven seat wagon version of the D-Max ute and it uses the same powertrain. So how did these four-wheel drives fare in the West Australian outback, towing camper trailers for more than 3000km over two weeks?

APPEARANCE
As far as utes go, the D-Max is attractive – it’s tough and masculine, and the smooth bodylines give it a touch of class. And it’s this toughness that makes it so popular. But, the interior is basic – even in the top-spec there’s nothing overly amazing about it. With synthetic seats and a dash that lacks brute masculinity it is just what you’d expect from a workhorse ute.

Yes, it’s got audio controls on the steering wheel, an audio unit with iPod and phone connectivity and a ‘sky sound’ roof-mounted sound system – the device connectivity is via an auxiliary point and the Bluetooth system can be a little jumpy. But this is about as fancy as it gets, there’s nothing that makes it stand out technologically from any other ute. 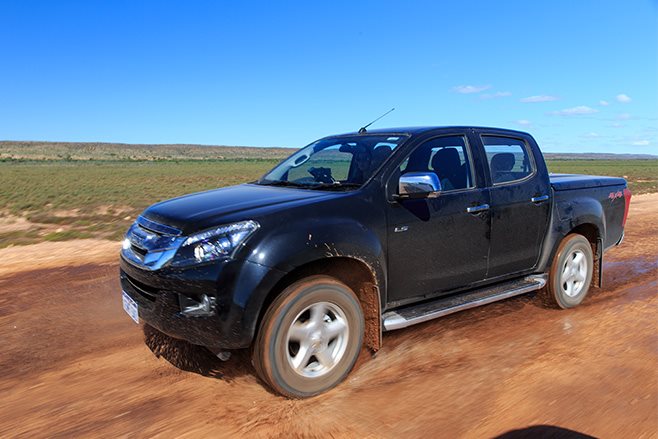 The tray has plenty of room for storage, but, as with all utes, it’s not water or dust proof so be wary. Given we were travelling through red dusty plains, over sand dunes, and at times through heavy rain, it was a good thing we had plenty of storage space in our Follow Me Campers trailers.

The seven-seater Mu-X has a lot more going for it. From the outside, the wagon is tough with a touch of elegance, making it a decent family wagon; for those wanting the best of both worlds, this is a reasonable option. 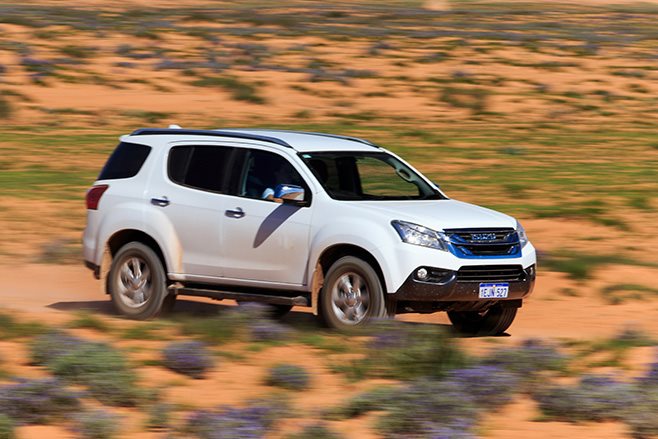 There’s plenty of room in the boot, and on our trip the Mu-X was our main storage vehicle. There are a lot of ‘stowaway’ spots in the Mu-X with two glove boxes, a top-box above the dash and plenty of cup-holders. Leather seats, and an infotainment system with GPS gives the wagon another up on the more workman-like D-Max.

Be warned, the audio unit uses a micro USB connection, so buyers will need to fork out more cash for an extra cord.

Neither the D-Max nor the Mu-X are particularly comfortable over long drives. If we had the choice, we’d change the seats to something with more support.

DRIVABILITY
Given both vehicles share the same mechanicals, the drive experience is quite similar. They are both fuss-free and effortless with tolerable noise levels. Off the beaten track the vehicles are admirable, yet won’t earn the title as extreme off road front-runners anytime soon. 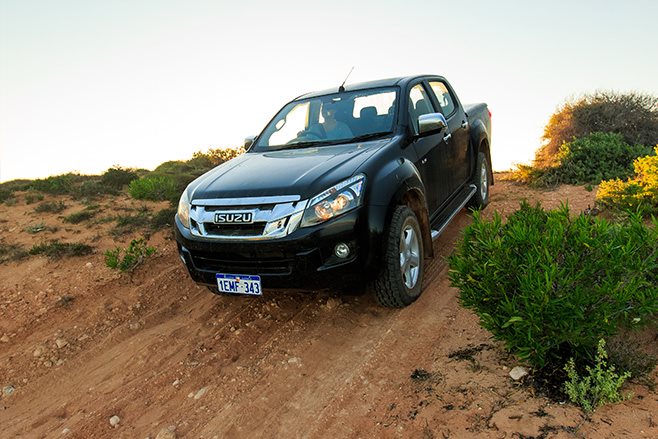 Standard on both the D-Max and Mu-X is cruise control, which worked against them on the steeper climbs on our trip up the north coast of Western Australia. With the cruise activated, the transmission held the higher gears a long time at the expense of vehicle speed so we opted to limit cruise control use to flat stretches only – despite driving for hundreds of kilometres a day. The extra weight of the trailers connected to the rear didn’t help either.

The Mu-X’s softer suspension calibration from its all-coil combination felt strong side winds along the coastal highway. The D-Max retains a work-ready leaf rear end which, combined with its larger footprint on the road, felt better planted in all conditions.

Both vehicles proved competent at towing. Over the two week journey we barely noticed the extra few tonnes loaded onto the back, except when the cars were chugging up those steep inclines.

TECHNO NO SHOW
The D-Max’s inferior infotainment unit was an annoyance – driving for long distances warrants a better option for music. There was no USB connectivity option – only an auxiliary input – and no digital screen for a reversing camera or GPS. But this is a ute, after all. 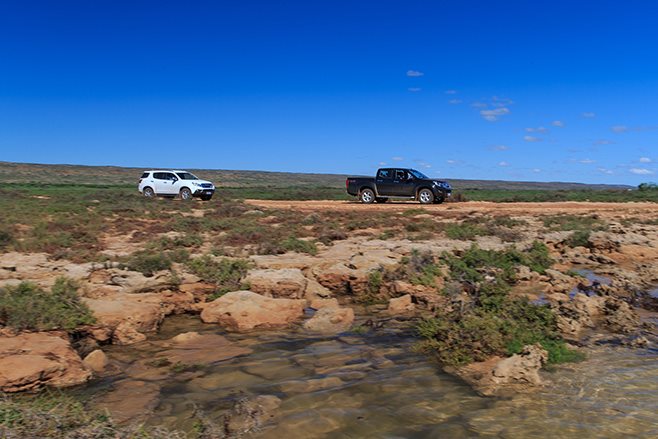 The tray’s hardcover latches on the D-Max were also a weak point – the latches kept coming loose. A few readers have expressed similar experiences with the latches on the bonnet. Granted, we were driving over heavily corrugated roads, but being an off road vehicle, this shouldn’t be an issue. We made a stop at a local hardware store and managed to fix the latch, but then the second one started to fault. With the lid detached and constantly clunking for the final leg of our trip, it made it a bit of a drag.

The Mu-X’s small 65-litre fuel tank is something buyers need to consider if long distances are planned. Having to constantly stop to re-fuel ate into our road time, and it’s something you need to consider when heading into remote areas. We got caught coming out of Francois Peron National Park when the Mu-X ran out of fuel. Those narrow roads aren’t ideal to re-fuel from jerry cans. 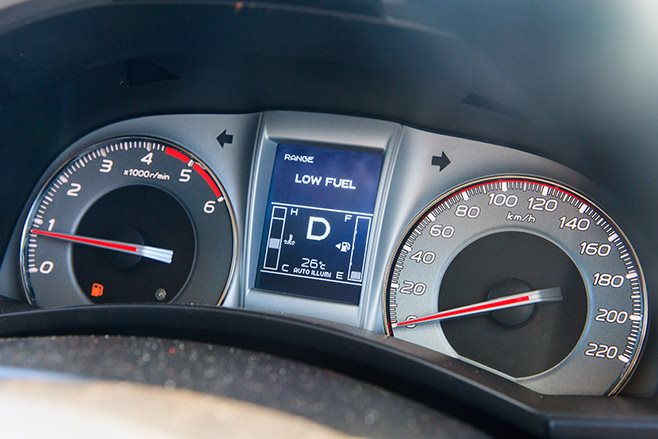 The D-Max has a 76-litre tank and while this isn’t a massive difference, it was certainly noticeable.

THE TECHNICAL STUFF
For $53,500, the Mu-X LS-T has a lot of features for money. It trumps the D-Max with rear-park assist, leather seats, touchscreen navigation, reversing camera and a roof mounted DVD entertainment system. 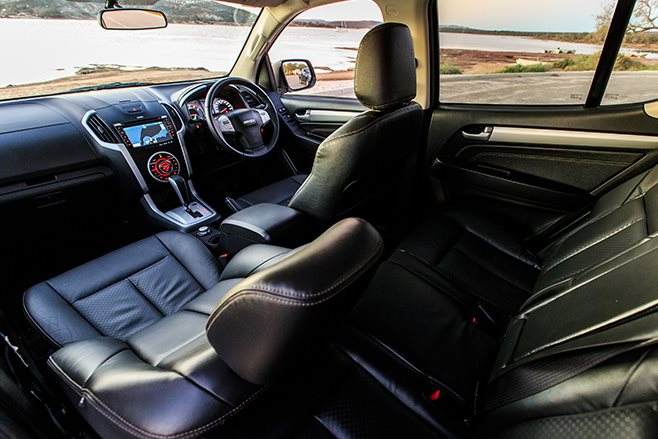 The D-Max LS-U, at $44,000, doesn’t get the same level of features, but then again, it has all the basics you would need in an off road workhorse ute, with air-con, power windows, central locking, cruise control, and power-adjustable side mirrors. 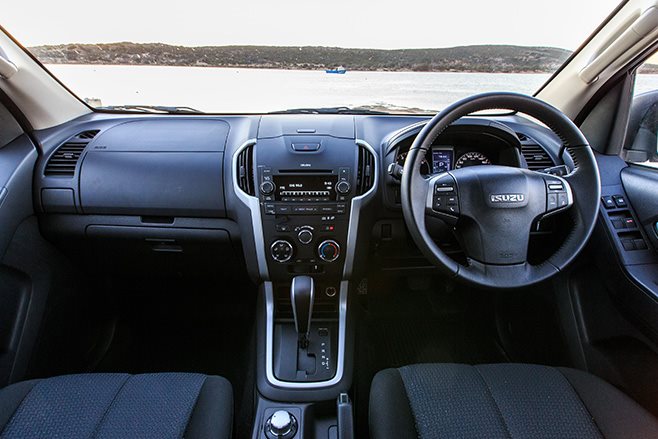 Both Isuzus get a five-star ANCAP safety rating and both sport the same 3.0-litre turbodiesel, in-line four-cylinder engine, producing 130kW and 380Nm. The gearboxes are exactly the same as well, with the Aisin AW TB50-LS five-speed automatic pushed in to service.

The Isuzus come with 17-inch alloy wheels; and for the trip we replaced the standard tyres with more durable Toyo Open Country A/T II tyres (see below) which made a world of difference across rutted roads, corrugations and sand. 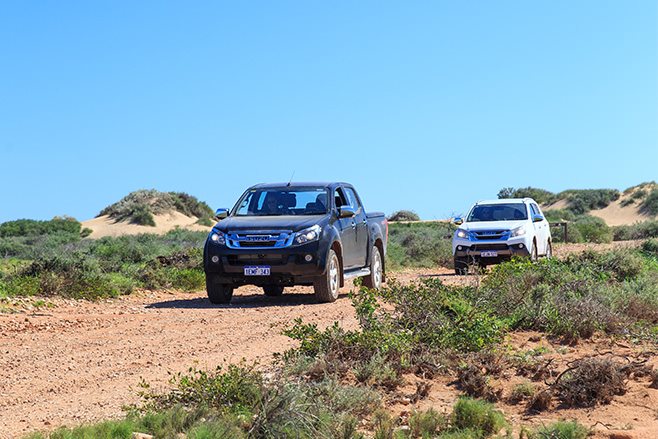 Isuzu claims the Mu-X is a vehicle that works as well on as it does off road – and we tend to agree. It’s great for those city commutes, but will also get the job done off road and on those longer trips away, especially when towing. The Mu-X could become a real contender in the Aussie market; if only the fuel tank was a bit bigger.

The D-Max, on the other hand, has already earned its reputation as a reliable vehicle. It’s nothing too fancy and doesn’t have all the gadgets and gizmos attractive to gen-y buyers, but it’s a work-horse ute and doesn’t need anything to flashy to get the job done. 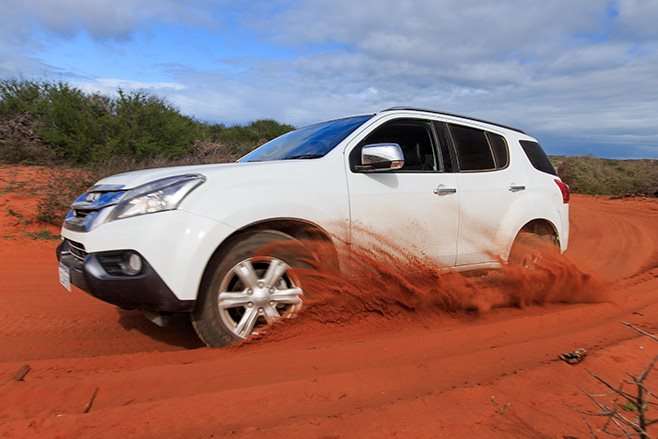 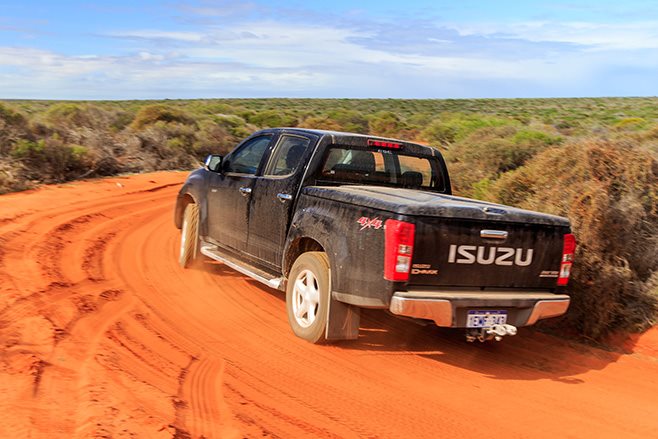 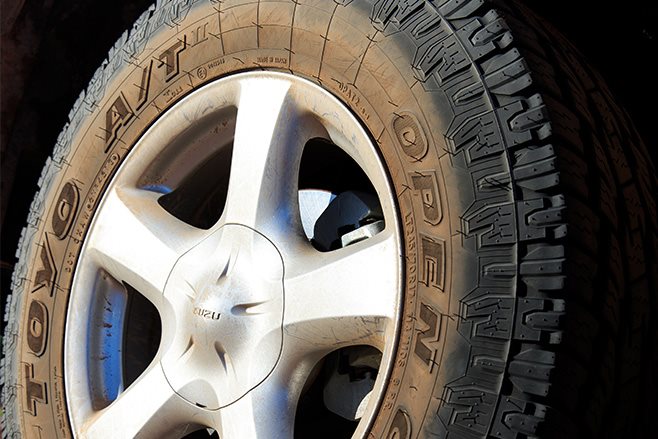 We replaced the tyres of the Isuzus with .

The A/T IIs have superior performance and are aimed at increasing tread life and better traction than their predecessors.

With our Toyo Tires A/T IIs, we drove the vehicles over soft sand, heavily corrugated roads and rocks with ease.

The tyres have a squared shoulder, scalloped shoulder lugs for better traction, and wide grooves for those slippery situations. The side tread gives more resistance to damage on the shoulder, which can be disastrous when travelling on outback roads.

The Toyo A/T IIs are the same production tyres that Bruce Garland and the Isuzu Motorsports team sucessfully ran on their Mu-X in the Finke Desert Race this year.

Over the two weeks of our trip, the tyres were filled with air and let back down several times and were put through the wringer over varying terrains.

The tyres had excellent traction and made off road driving easier.

With no punctures and only one bogging, which was probably more a result of too much air in the tyres than anything else, it’s safe to say the A/T IIs really impressed.

On road, they provided us with a smooth drive, good braking performance and a quiet ride.

On close inspection at the end of our trip, there was little to no damage to the tyres, other than maybe a little bit of red dust stuck to the rubber.

All in all, these tyres are up there as some of the best available for on and off roading.