The Land Rover Discovery TDV6 you see here is this magazine’s 2013 4X4 Of The Year. For more information read about the 2013 4X4OTY.

The Disco’s ‘TDV6’ designation means it has the low-spec 3.0-litre V6 bi-turbo diesel engine, the base model in the current Discovery 4 range. It made the starting grid in last year’s 4X4OTY thanks to that engine – which replaced the outgoing 2.7-litre V6 turbo diesel – and the new eight-speed automatic gearbox.

Meanwhile, this Prado GLX diesel auto is the facelifted model for 2014. It has the same powertrain as before, and the same chassis at this spec level, but comes with new exterior styling and interior detailing. The GXL is the second of four Prado specification levels but it’s still less expensive than the base-model Discovery. 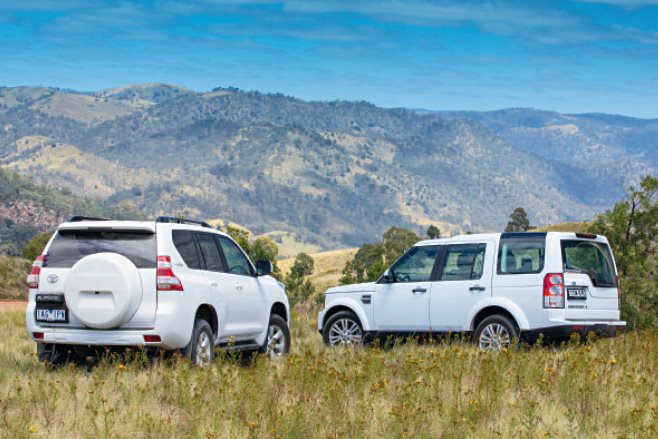 POWERTRAIN & PERFORMANCE
The Prado’s D-4D 3.0-litre four-cylinder turbo diesel and five-speed automatic appeared in late 2006, in the previous generation 120 Series Prado. With minor revisions to engine and gearbox, the driveline was carried over into the 150 Series when it launched in late 2009 and soldiers on today.

It claims a modest (by today’s standards) 127kW but a slightly more encouraging 410Nm of torque. On the road it performs better than the numbers suggest; the fact that maximum torque is available from just 1600rpm and doesn’t diminish until 2800rpm is a clue that this is a nicely flexible engine. 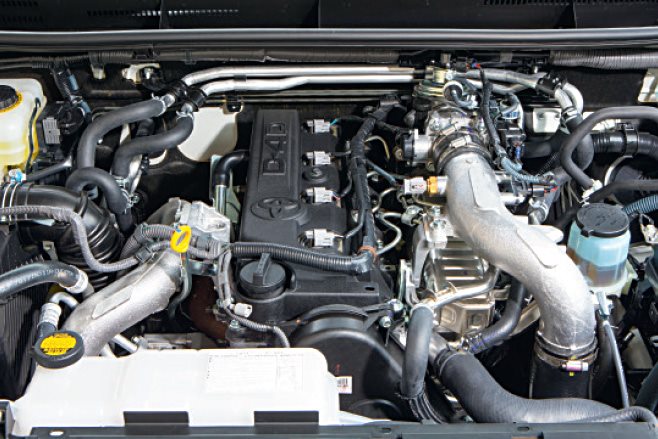 This flexibility gives more performance then the power figure suggests and makes life a bit easier for the five-speed automatic gearbox, with the two working in harmony to produce a fuss-free and generally refined driving experience. The engine’s impressively quiet at highway speeds too, the ambient noise helping to mask the diesel rattle you hear at lower speeds.

Drive the Prado in isolation and the powertrain offers little reason for complaint. However, drive it back to back with the Discovery TDV6 and its star starts to fade. The TDV6 is the low-power version of the Discovery’s 3.0-litre V6 bi-turbo diesel, yet it’s significantly punchier than the Prado’s engine despite having to cope with a 250kg-odd weight penalty.

The TDV6 not only has 22 per cent more power and 27 per cent more torque than the Prado but its superb eight-speed automatic makes far better use of the available power than the Prado’s five-speeder. And it’s faster to react, smoother shifting and generally more intelligent. 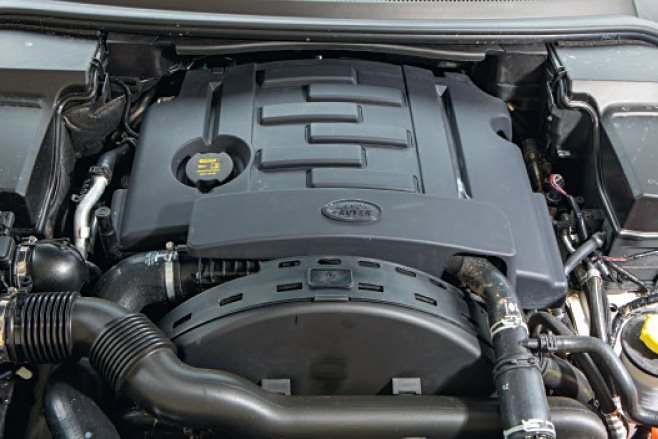 The Discovery’s engine is also quieter and more refined than the Prado, so the whole powertrain offers a level of sophistication and refinement that’s a cut above what’s on offer with the Prado.

It’s a pity that Land Rover saw fit to replace the conventional shift lever with a rotary dial with the new eight-speed. You get used to the dial but it smacks of gimmickry and means the only way to manually shift is via the steering wheel paddles. That’s fine on-road but isn’t great in the dirt, where you’re often using far more wheel rotation. The saving grace is that the sophisticated eight-speeder works just fine in Drive, making manual manipulation largely redundant.

While the Discovery clearly out-grunts the Prado, there’s little between the two for fuel economy; our test figures were as good as identical though the official ADR figures slightly favour the Prado. Fuel range is another thing; the Discovery’s barely adequate 82.3-litre capacity falls short of the Prado’s 150 litres.

RIDE & HANDLING
The Discovery and the Prado are both separate-chassis designs but that’s about it for platform similarities. The Prado is relatively old-school, with a live-axle at the rear and conventional coil springs all around. In contrast, the Discovery has fully independent suspension and height-adjustable air springs. 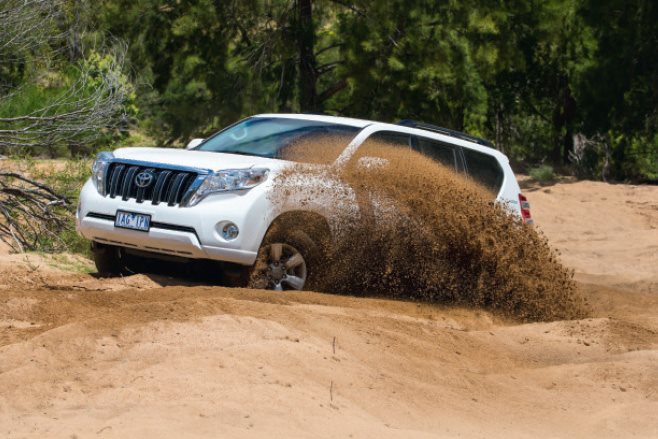 Despite a firmer ride than the supple and plush-riding Prado, the Discovery is more stable and composed on crook roads, especially at higher speeds. It’s also a more engaging and enjoyable drive, with better feel at the wheel and more connectivity between driver and road. It may be bigger and heavier but the Discovery actually feels the sportier of the two. 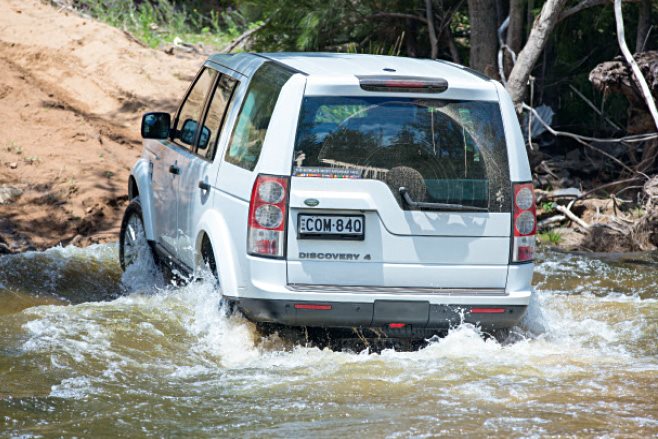 On the down side, the Discovery can suffer from steering rack rattle on corrugated dirt roads and the low-speed ride on very rough secondary roads isn’t as good. The Prado does a better job of road-shock isolation and is almost always comfortable regardless of the road surface. On good quality roads there’s little difference between the two.

OFF ROAD
The Prado’s on-road comfort is largely due to plush long-travel suspension and this is also the key to its considerable off-road prowess. In GXL spec, the Prado doesn’t have much in the way of special off-road kit – aside from electronic traction control. But that doesn’t matter, it does the job just fine. 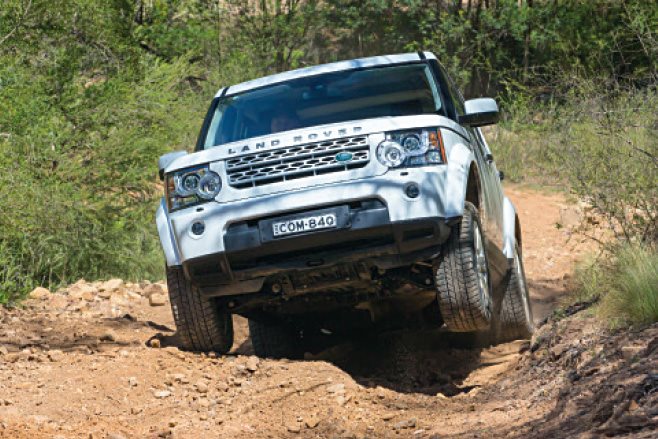 In contrast, the Discovery has driver-selectable programs for different off-road conditions (the much-mimicked Terrain Response system) along with height-adjustable suspension and a self-locking, self-proportioning electronic centre diff and electronic traction control. Our test vehicle was also equipped with the optional ($1060) electronic rear locker.

Even with all the Discovery’s extra features, there’s not much between the two off-road; both have their strengths and weaknesses. 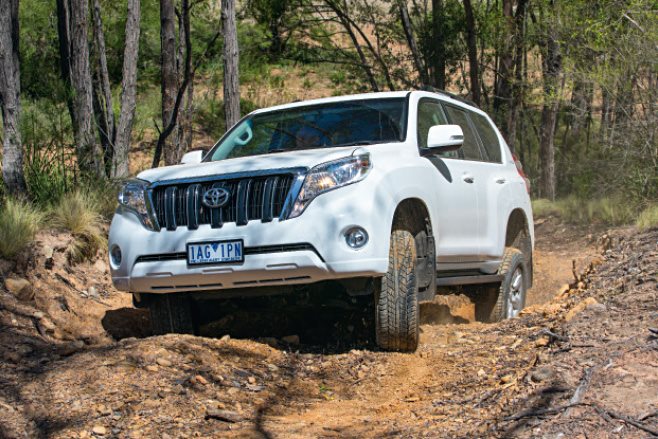 The Prado’s main strengths centre on its simple, robust and soft-riding long-travel suspension. There are no airbags to rupture or complex control systems to worry about. Its wheel and tyre package is also more practical and offers a far greater range of replacement off-road-functional rubber.

The 255/5519s on the Discovery aren’t as practical and you can’t fit a smaller wheel due to the larger brake package standard on the Discovery 4 compared to Disco 3. There is a bespoke aftermarket 18-incher that will fit but we haven’t tested it and can’t comment on it with regards to brake caliper to wheel clearance and the potential for rocks or other debris to be caught there.

CABINS & ACCOMMODATION
The Discovery has an advantage in terms of space and accommodation as it’s slightly bigger than the Prado; size-wise it’s more a competitor for the LandCruiser 200.

The Discovery 3, with its box-like body, set a new standard in cabin flexibility and space efficiency when it was released in 2004 (2005 in Australia) and the D3’s body and cabin architectures were retained for Discovery 4. In contrast, Toyota’s Prado 150 went backwards from the 120’s cabin functionality due to the redesign of the third-row seats. 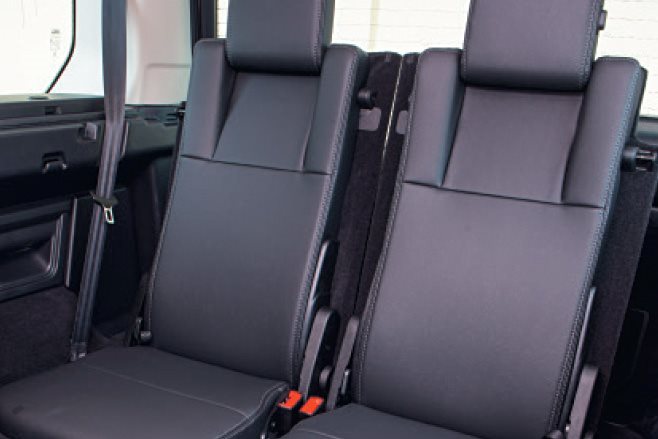 In the 120, the third row seats folded up against the rear windows and, apart from rattling on rough roads and impairing some vision, they worked well. They were also easy to remove if not needed. The 150’s third row folds onto the floor, reducing the depth of the cargo area. From 120 to 150 series, the seating capacity was also reduced from eight to seven and the fuel capacity from 180 to 150 litres (no disadvantage here, given the Discovery’s seven seats and 82.3-litre fuel capacity).

In this base-spec Discovery (as in base-spec Prado GX) third-row seats are an option ($2500) but when fitted, they are more spacious and comfortable than Prado’s. There’s also more space behind the seats when the third row is in use.

Thanks to the Discovery’s horizontally split rear tailgate, that storage space is also far more useable as items stowed behind the third row can be held in place by the lower tailgate when the main part of the tailgate is opened. With the Prado’s side-opening single rear door, items stowed behind the third row tend to fall out when the door is opened. Despite the minor improvement in access to the Prado’s third row in the 2014 facelift, it’s still easier to get into the Discovery’s third row. 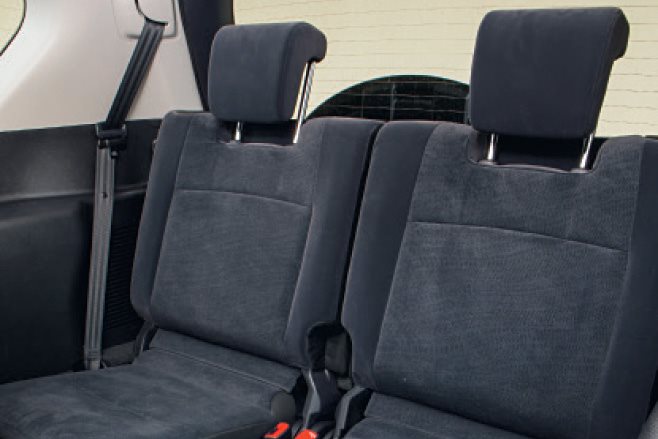 More points go to the Discovery as all seven seats fold individually, and the middle and third rows can lie completely flat. The Discovery’s second row is also more spacious for three adults than the Prado’s, and its front seats are more comfortable, though there’s not much in it and your personal preferences may be different.

PRACTICALITIES
As mentioned, the Prado is ahead on tyre and wheel practicality, and fuel capacity – both important criteria for Australians. However, the Discovery counters with a 3500kg towing capacity against the Prado’s 2500kg. Both offer similar payloads but points for the Prado’s under-bonnet layout, with plenty of room for a second battery.

SUM UP
Make no mistake, the Discovery 4 is one very clever, capable, enjoyable and refined vehicle. In most key areas it’s comfortably ahead of the Prado. Its powertrain is considerably more sophisticated and refined and outperforms the Prado. 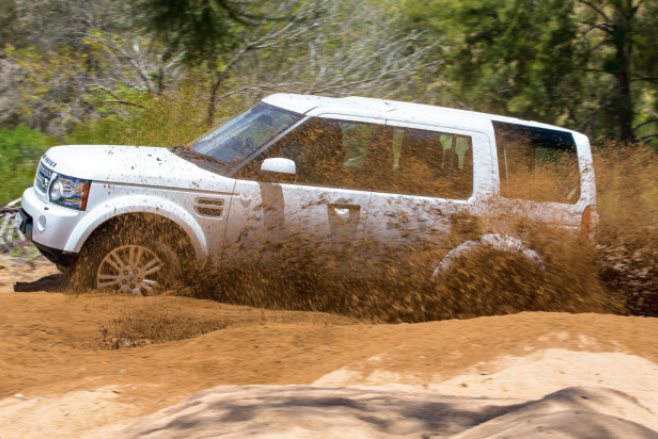 The Discovery also handles better and is a far more engaging on-road drive. Perhaps more significantly, the cabin is bigger and far more functional. It’s also as good as, if not better than, the Prado off-road.

An extra trick up the Discovery’s sleeve is that it should be relatively simple to upgrade engine performance to the SDV6’s 183kW and 600Nm, a fair jump from the 155kW/520Nm TDV6 engine tested here. All the mechanicals are identical. 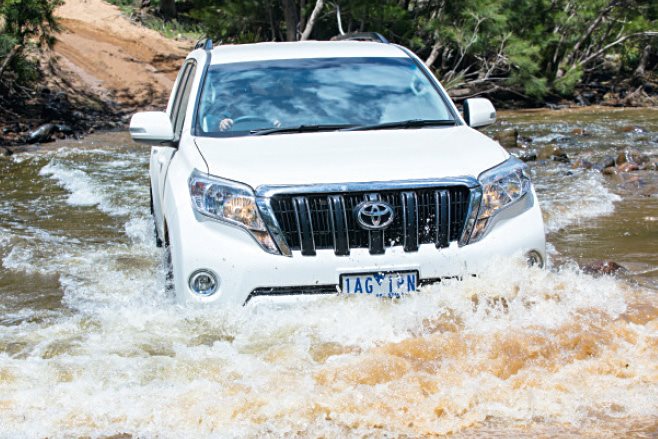 The Prado wins back points on pricing, wheel and tyre practicality, standard fuel capacity, and its simple and robust chassis design. Service in remote areas and resale value are also major attractions, as with all Toyota 4x4s. All this makes the Prado a sensible and sound purchase, even though it’s not as good a 4x4 as the Discovery. 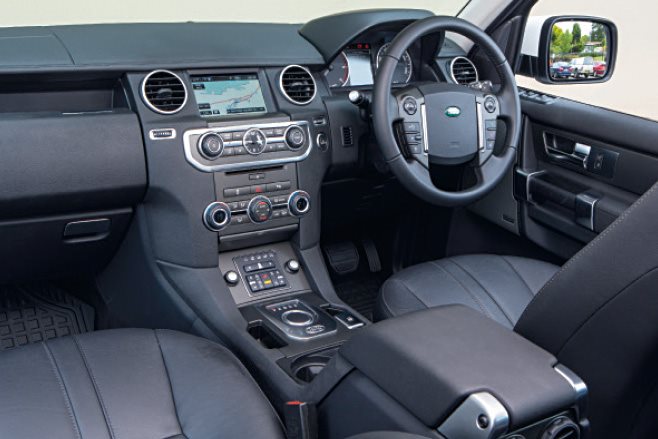 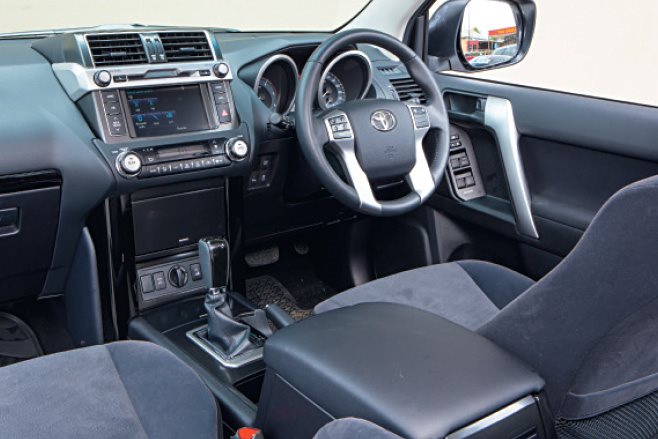 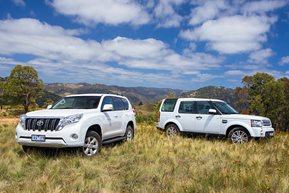