Such is Toyota’s confidence in its new eighth-generation Hilux that it was launched on some of the most difficult off-road tracks ever used by a manufacturer to introduce a new 4x4 to the specialist off-road media.

This is the first all-new Hilux in ten years and it’s the result of more than six years of design, development, testing, redesign, and then more testing and redesign.

Toyota has left no stone unturned to produce a vehicle that’s comprehensively better than its predecessor, both on and off the road, and it will no doubt further cement the Hilux as Australia’s best-selling 4x4, if not Australia’s overall best-selling car, within the next 12 months. 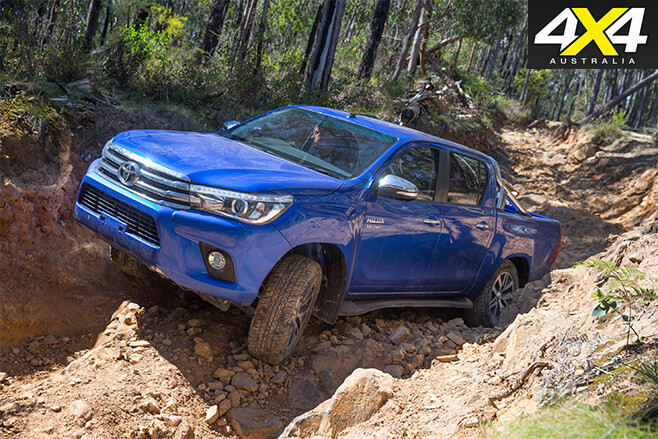 The new Hilux comes in no fewer than 31 variants, which is eight more than the out-going model. Of those 31 variants, 19 are 4x4 models and of those 19 more than half are dual cabs.

Hilux 4x4 buyers can choose from two all-new diesel engines and a 4.0-litre petrol V6, which is carried over from the previous Hilux with minor revisions. Both diesels are available with all-new six-speed manual and automatic gearboxes while the V6 is only available with the new six-speed automatic.

The two new diesels share much technology, but differ in size. The smaller 2.4-litre 110kW/400Nm diesel is only available in the base-spec Workmate models while the larger 2.8-litre 130kW/450Nm diesel comes in the mid- (SR) and top- (SR5) spec models. When mated to the six-speed manual, the 2.8’s maximum torque is pegged at 420Nm. First impressions behind the wheel are of a far more modern, stylish and car-like interior, with even the Workmate models getting a tablet-style multi-function touchscreen that dominates the dashboard. In all models, drivers have the benefit of tilt and reach steering wheel adjustment while SR and SR5 models have the benefit of seat height adjustment. The cabin is also slightly taller and wider than before.

As soon as the diesel engines start they sound more refined and quiet, with far less diesel rattle and knock than with the out-going 3.0-litre engine.

Once underway, the engines continue to convey improved refinement and, at times, both feel and sound surprisingly non-diesel like. 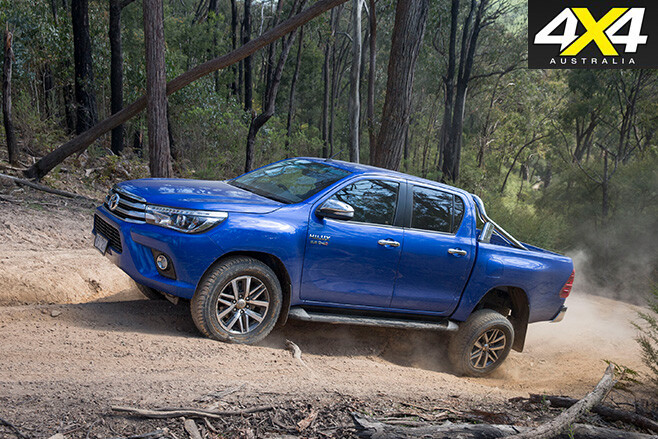 Thanks to the 2.8’s extra torque (90Nm in auto form), it initially responds better than the outgoing 3.0-litre. Ultimately, however, the outright performance is only marginally better than the 3.0-litre. That’s partly because the six-speed auto adds an extra overdrive ratio rather than tightening up the ratios gaps.

With the manual box the 2.8 actually feels spritelier than with the auto, despite the reduced torque. In SR5 spec the 2.8 manual also gains an ‘intelligent mode’, which makes it nearly stall-proof from take-off, and it also softens the shifts by matching the engine revs.

In many ways the real surprise packet is the 2.4-litre diesel. It gives little away to its bigger brother in most driving situations, even if it doesn’t match the pedal-to-the metal punch of the 2.8 diesel.

Both diesels mate nicely to the six-speed auto, which is a more refined and ‘intelligent’ gearbox than the outgoing five-speed automatic.

Thanks to the all-new and stiffer frame, among other changes, the Hilux also rides and handles better than before. Even though the Hilux still feels a lot like a ute because of its load-carrying rear suspension, its front-to-rear suspension match is much better, as is its light-load (200kg as tested) ride compliance.

But as good as the new Hilux is on road, the biggest improvement comes off-road. Not only is the ground clearance improved, but there is more rear wheel travel (up 65mm), thanks to redesigned rear suspension that incorporates 100mm longer leaf springs.

Perhaps more significant is the new A-TRC electronic traction control that is far more aggressive in limiting wheel spin. Such is the effectiveness of the A-TRC that the rear diff lock, which is now standard on the SR and SR5 models, is almost redundant.

When the rear locker is engaged, the A-TRC is disabled across the front axle, a move that’s in the interest of driveline durability according to Toyota.

In another good move, not only can the Electronic Stability Control be manually disabled either by a dashboard switch or by selecting low-range, but the A-TRC can also be switched right off in situations (like mud and sand), where momentum is more important than traction.

Those who use their Hilux in more severe off-road conditions will also appreciate the much more extensive and robust underbody protection that this new Hilux offers.

(Note: one of the pictured blue Hiluxes is a pre-production test car that has been through extensive heavy-duty, off-road testing and evaluation.  This is why there is no number plate and there is damage to the side steps)