THE medium-to-large 4WD wagon segment has seen a raft of primarily ute-based newcomers join the party in the past five years, and with it a boost in towing capacity.

Not so long ago, 2500kg was the maximum towing limit for wagons like the Toyota Prado (and still is), but with these newcomers arrived a boosted towing capacity – around 3000kg is the new norm. While a solid tow vehicle, the Mitsubishi Pajero misses out mostly because it’s been around essentially unchanged for nine years. In fact, it hasn’t been a fresh-sheet design since before Sydney hosted the Olympics.

The Prado has the lowest towing capacity here, at 2500kg, followed by the Fortuner at 2800kg and rest of the group at 3000kg (except Pajero Sport, with its pub-bragging rights of ‘best’ capacity at 3100kg, just 100kg more than the others). One figure often missing in towing specs is the towball download maximum – in the case of all of the wagons here, it’s the industry standard 10 per cent of towing capacity.

WE took each of the vehicles, towing the tandem-axle ’van, on a test loop covering slightly more than 100km, taking in the lower Blue Mountains and the north-western Sydney Basin. We had a wide variety of road conditions to give the wagons a towing workout, from a freeway to secondary tarmac and even a bit of dirt thrown in for good measure. Speed was capped at 100km/h (instead of the statutory freeway limit of 110km/h) as we felt this was as high a speed as you’d want to go when towing.

In an ideal world we would have tested these vehicles with a caravan right on the limit of their towing capacities. To be consistent, we had to tow the same ’van that would be legal across all the six vehicles, and that meant it had to be legal behind the Toyota Prado, with its 2500kg capacity – and also use a ’van that had a legal theoretical payload. Using a 2499kg unladen caravan isn’t realistic when the typical tandem-axle ’van has a payload of 400kg. We used a full-height tandem ’van weighing slightly less than 2100kg and with 180kg on the towball. That’s plenty enough to sort things out. 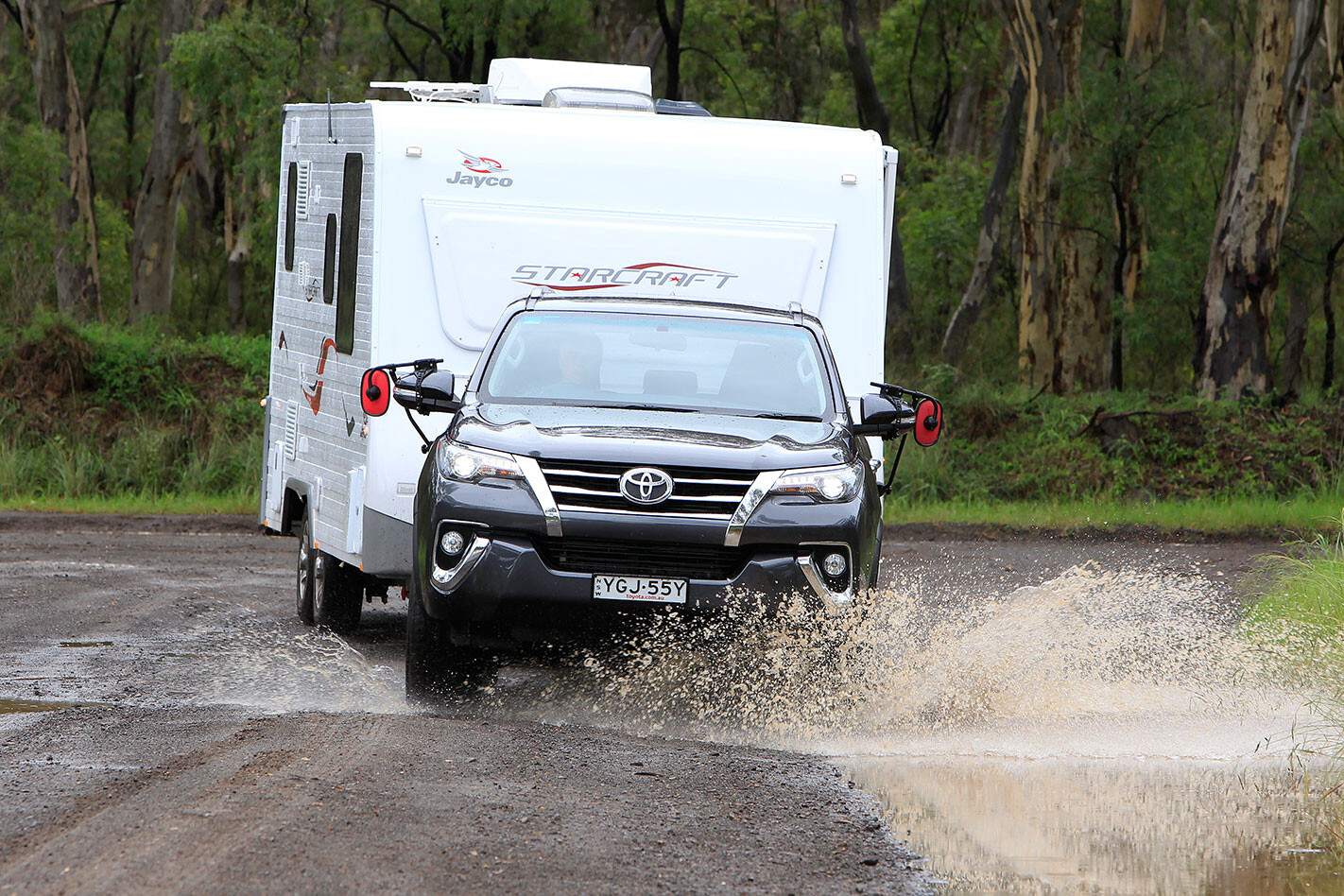 You don’t go towing to win drag races, but a standing-start acceleration test is a good way of comparing the vehicles’ relative flat-out performance. We used sister magazine Wheels’ Driftbox to accurately record the standing start to 60km/h and 80km/h figures. Unfortunately, it poured for the test week, so the acceleration tests were marred by loss of traction off the line due to a soaked surface. However, given that these are not high-performance cars where every tenth can make a difference, our figures are still representative of their comparative all-out performance.

While all-out acceleration figures give you part of the towing performance puzzle, how the wagons slug it out climbing hills is another big chunk of the picture. The hillclimb test on a freeway hill started as a shallow climb then gradually became steep, approximately 1:5 gradient. Speed was settled at exactly 80km/h on the Driftbox at the beginning of the rise, then full throttle was applied at a set marker point. The results were very interesting, showing how in some cases gearing can, to some degree, make up for a lack of torque. 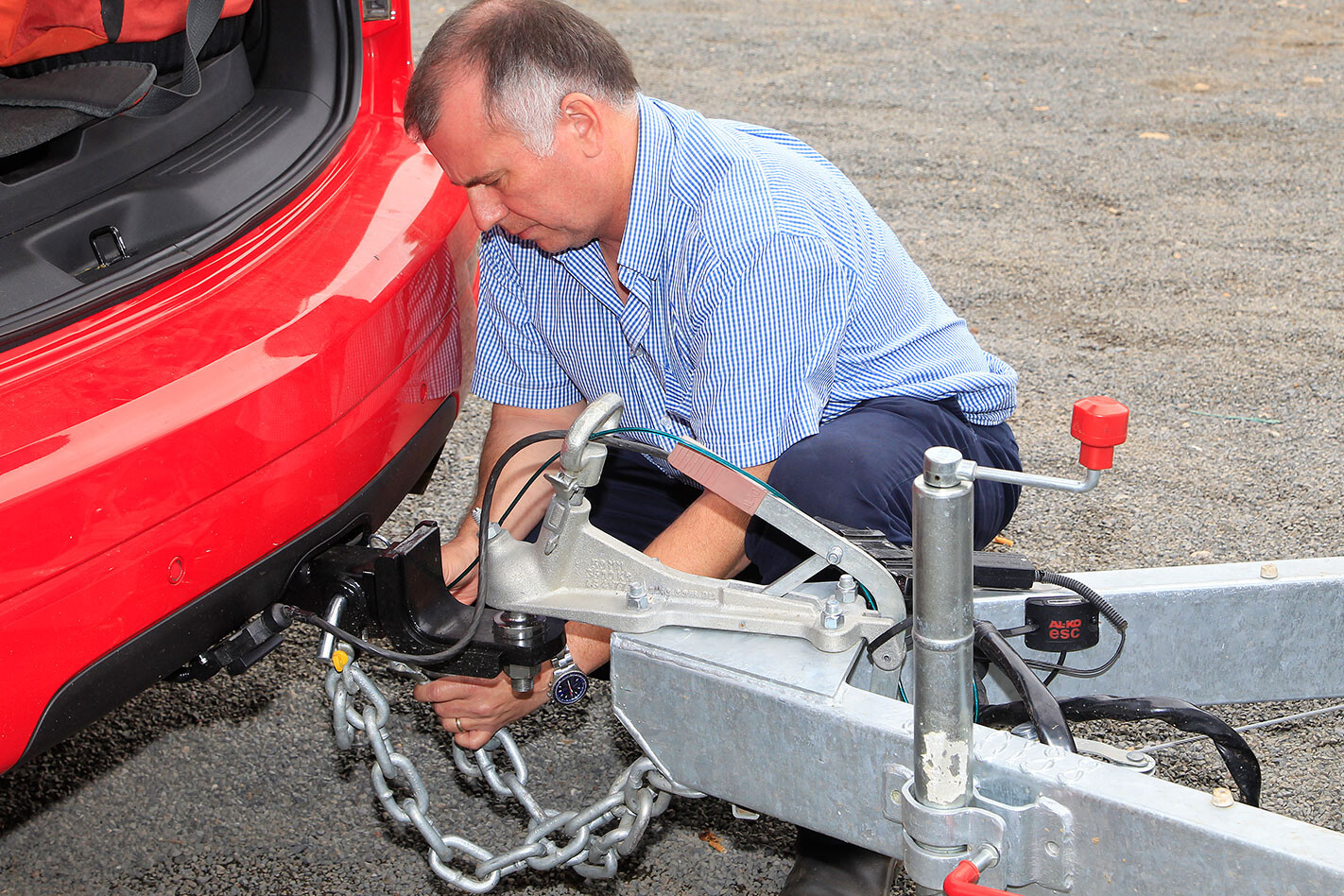 It’s typical to tow a trailer right on a vehicle’s maximum limit and load it up with every kilogram available of the vehicle’s payload, but it’s worth noting how much payload or towing capacity you lose with the maximum GCM of some of these vehicles (GCM is the maximum total weight – including occupants, gear, fuel, water, everything – allowed for vehicle and trailer together).

We didn’t need to use a Weight Distribution Hitch (WDH) – these wagons had a relatively light 180kg on the towball, and all had front body lift measurements within an acceptable range. We also wanted to be able to feel if towing changed the wagons’ ride and stability, which is next to impossible to achieve when using a WDH.

Towing mirrors (other than the fixed Clearview type) are either door-mounted or clipped onto the side mirrors. We used Ora’s Rossa units with the optional magnetic door-mounted bracing.

The 2183kg Jayco at tare weight (that is, with water tanks and gas bottle empty and no other payload on board) weighed 180kg on the towball.

The Everest is a great tow vehicle, with plenty of torque allowing it to cruise easily. It also offers ample overtaking and hill climbing power. While fuel consumption is relatively high and the payload takes a hit when towing at its 3000kg limit, it has a very good touring range, excellent engine braking, and a comfortable and stable chassis. On test, it was the most well-rounded towing wagon.

The Holden Trailblazer's impressive, class-leading torque should have seen it blitz the field but, as we found in performance testing, it didn’t always lead the pack. Yet there’s no denying this vehicle gets on with the business of towing very easily and, while it didn’t feel quite as planted on the road as some of the others, it had impressive engine braking and a reasonable Gross Combined Mass limit.

The MU-X was the surprise performer of this group. The extra 50Nm of torque and new transmission for MY16.5 gives the Isuzu a new lease on life, and its towing performance was very competitive while staying economical – always an MU-X strength. While the MU-X’s towing ride could be better contained, and it’d be nice to have a better touring range, it was the most rock-solid of the group for towing stability and one of the few that you can use every kilogram of payload while towing at its limit. 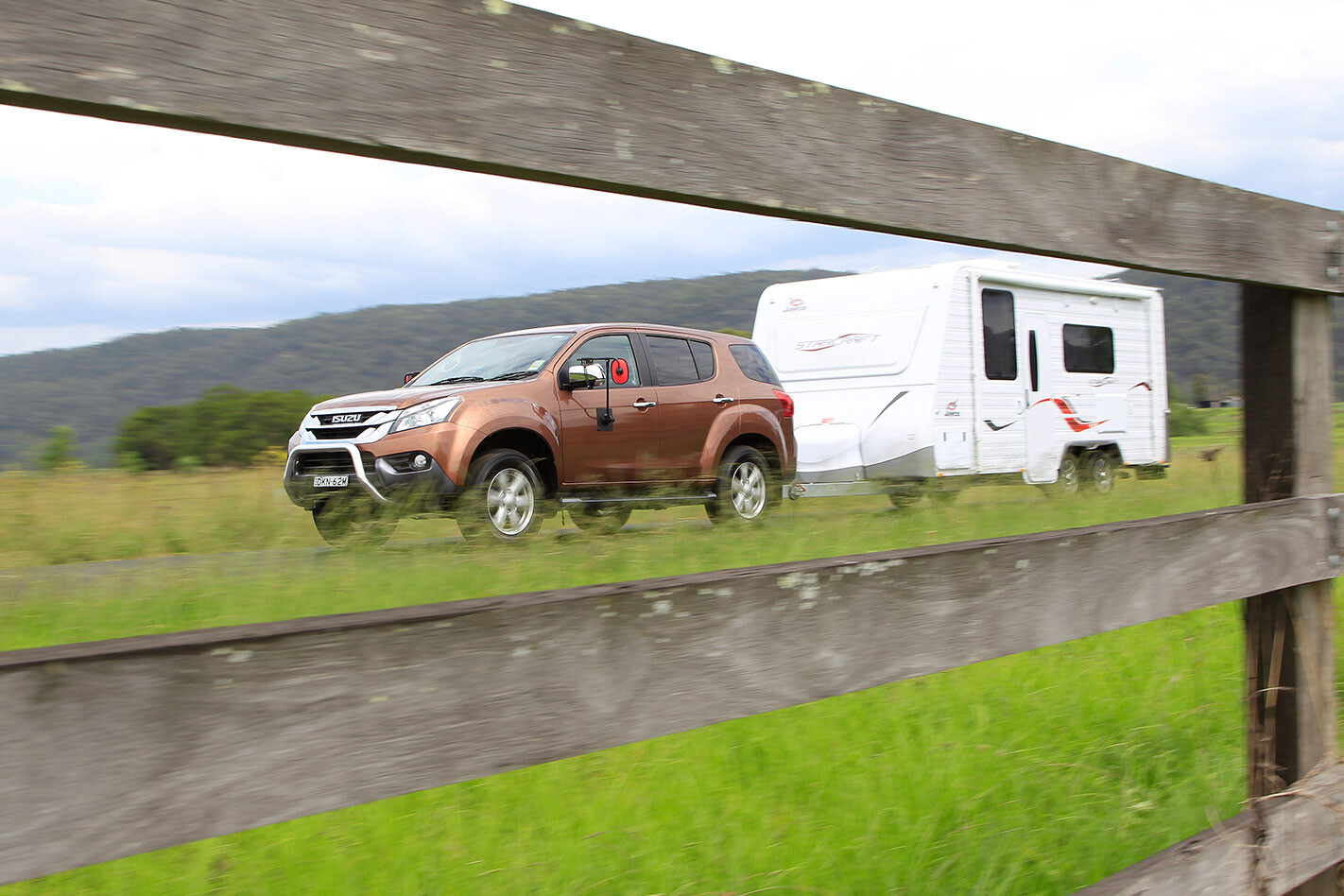 The Pajero Sport might have the best towing capacity, but it loses a fair bit of payload when you’ve hitched up a trailer at the limit. No matter, the little 2.4-litre four teams up really well with the eight-speed auto to extract a surprising amount of get-up-and-go with 2100kg lumbering behind. You do pay for it at the bowser, though, and the firm-riding Mitsubishi becomes even more so when there’s weight on the towball.

The Prado is in some ways an outstanding tow vehicle. It was one of the most rock-solid vehicles here when cruising with a caravan hitched up. It’s no surprise really with its near-2500kg kerb weight, which in part explains the not-so-stellar towing performance and fuel economy. It might be a bit thirsty when towing, but then the Prado can travel double the distance of the others here before it’ll need fuel again – a great asset when you’re out bush. While some might argue the Prado’s 2500kg towing limit is realistic, it does knock out plenty of trailers and caravans that weigh just that bit more when loaded up.

The Fortuner gets the same engine as the Prado but carries much less weight and, with its part-time 4WD system, has less drag on components when in 2WD mode. Yet it lacks the Prado’s excellent range and its ride quality goes south with 180kg pushing down on the towball. Perhaps loading it up more would sort out its ride. And there’s no issue doing that because the Fortuner’s GCM allows payload and towing capacities to reach their full limit.

Keep an eye out on our website for in-depth videos on each individual tow rig at the 2017 Tow Test!

KNOWING weight limits is important when you’re towing, and if you haven’t had your rig weighed at a weighbridge then you’re really flying blind. You don’t have to weigh your vehicle and trailer every time you tow, but if it’s a new set-up then you have to know exactly what it weighs.

Two identical caravan chassis can be 100kg different over the weighbridge, simply because of the amount of galvanised paint left in the chassis rails.