SINCE the Outlander PHEV launched back in 2014 Australians haven’t entirely jumped at the opportunity to own a plug-in hybrid SUV. Only 1650 of the units shifted from showrooms, meaning Australian demand for the mid-sized SUV hovered at around 800 units per annum.

Globally, however, 118,200 Outlander PHEVs have been sold, proving that Australia is behind the eight ball when it comes to embracing new technology. Put that down in part to the Australian government’s refusal to completely buy in and promote cleaner energy.

The SUV market has also seen steady growth to the point of it overtaking passenger car sales in February, 2017. According to Tony Principe, Mitsubishi’s executive director of marketing, SUV sales for the Japanese company are up 43.6 per cent year-on-year – thanks in part to record sales for the Outlander and Pajero Sport.

Read about the 2017 Mitsubishi Outlander review 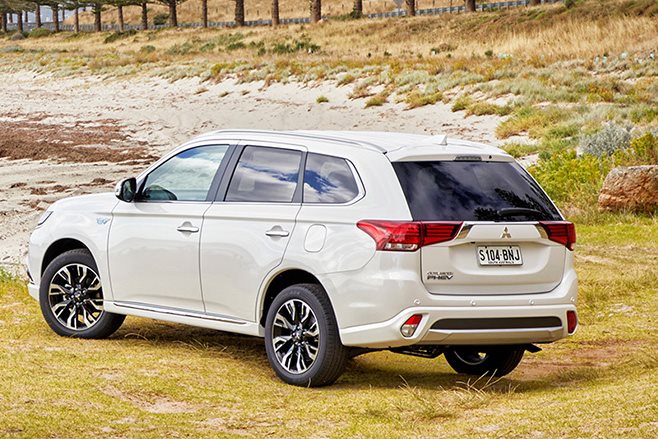 So with Australians investing more hard-earned into the SUV segment, will we now see more buyers opt for the facelifted Outlander PHEV?

The PHEV arrives into the booming segment at $50,490 for the LS and $55,490 for the Exceed, so the price has gone up. But for that price premium you get a refined plug-in hybrid powertrain, new technology, as well as improved handling and NVH.

Read about the 2014 Mitsubishi Outlander PHEV

Getting a definitive maximum power output isn’t just a matter of adding up those figures, but 120kW is the accepted figure for most practical instances; though it can exceed that number. With all forces combined the PHEV has a 1500kg towing capacity.

The multi-purposed petrol engine can recharge the 12kW/h 300-volt lithium-ion, air-cooled battery pack that lives beneath the floor in the middle of the vehicle, it can drive the front wheels, or it can sit back and let the electric motors do all of the work. 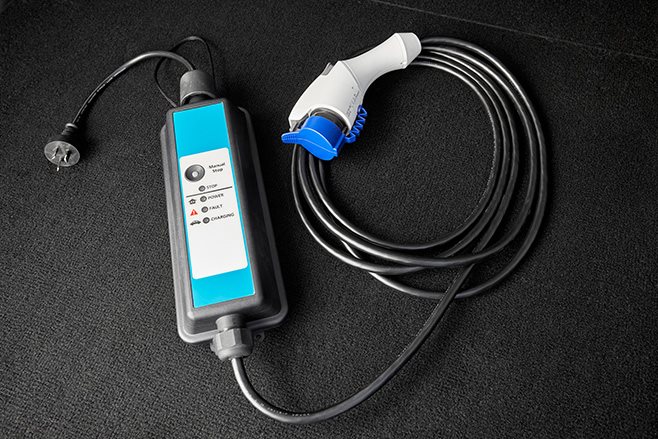 CHARGING?
A full charge via a 240v/10A household outlet is said to take 6.5 hours, while a Direct Connect Charge can put 80 per cent of juice to the battery in just 25 minutes.

A five-stage regenerative braking system, controlled via steering wheel-mounted paddles, charges the battery on-the-go. The system, probably familiar by now to most readers, triggers when the driver lifts off the go-pedal or when they apply the brakes.

A more efficient on-the-go charging method is the driver-activated Battery Charge Mode, which can be activated via an in-cab button. It can provide 80 per cent of charge in 40 minutes and is simple and effective in operation. 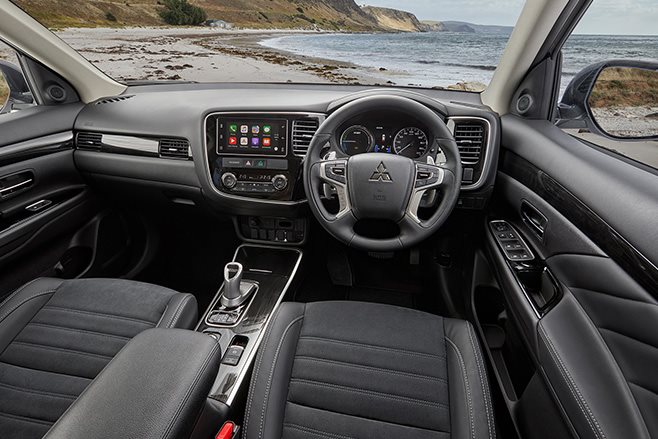 ON-ROAD PERFORMANCE
Acceleration has improved by 0.1g, yet floor the throttle and the combination of petrol and electric power leaves the PHEV feeling underwhelming. However, drive it as it is designed – smooth pedal work, for example – and the PHEV blossoms.

Swapping between drive modes – EV, Series Hybrid and Parallel Hybrid – reveals a seamless transition between electric motors, petrol engines or both. What once provided a noticeable shudder up the spine is now a barely-even-noticeable shift. This is due in part to increased structural rigidity in the body, a revised suspension design (new shock valves, rear tow link bushes, lower friction front struts, and larger rear shocks with new damping) and vastly reduced NVH throughout the vehicle. 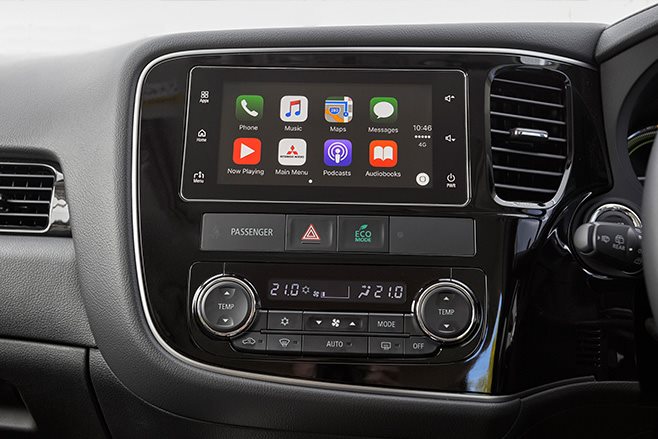 The electric-only EV mode, powered by both front and rear motors, can function for up to 54km. So, in theory, you could drive it to and from work and charge it up at night, saving you a fortune in the long run. In reality, however, the battery depleted much earlier for us on the test route – and we followed the speed limits diligently and drove as we normally would. To maximise EV longevity, you’d have to change a few driving habits and drive it a lot smarter than we did.

What the drive route along Adelaide’s stunning hills, dirt tracks and freeways did expose was the SUV’s exceptional fuel usage, on-road dynamics and NVH improvements. 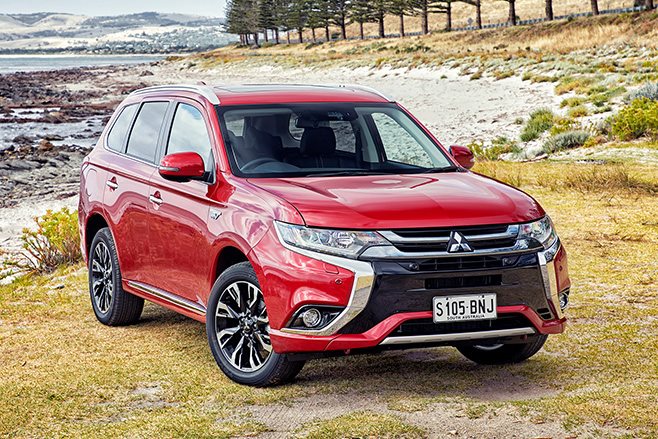 For added control, Mitsubishi’s drive-by-wire Twin-Motor Four-Wheel-Drive system is mated to the Japanese company’s S-AWC (Super All Wheel Control) which integrates 4WD, ASC, ABS and Active Yaw Control. While a 4WD Lock function straightens the PHEV up on dirt, snow or rocks. However, with a ground clearance of just 190mm (and goo instead of a spare tyre), you’d be brave to take the PHEV anywhere remotely off-road. 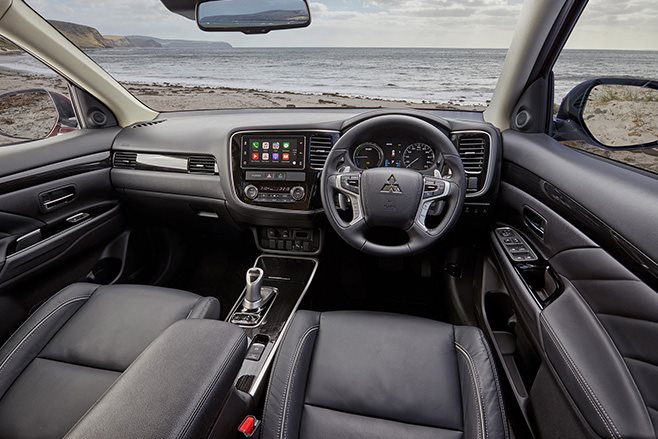 HYBRID FUTURE?
When asked if the hybrid powertrain could make its way to other models in the Mitsubishi stables, in particular a future Pajero, Mitsubishi said it’s possible, but there are no current plans. With the Nissan Renault Alliance taking a majority stake of Mitsubishi in 2016, we may even see the Mitsubishi-pioneered technology spread across all brands. 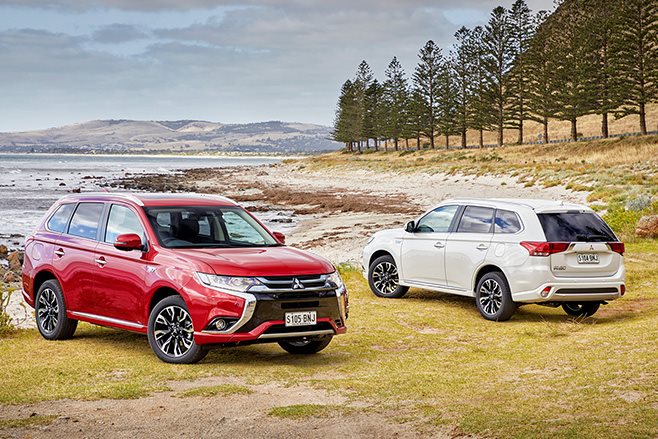 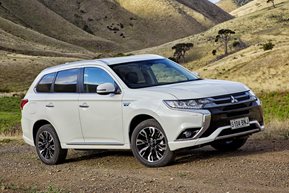