The 2021 Ram TRX slots Chrysler supercharged Hemi V8 in to the 1500 truck, to take on Ford’s F150 Raptor and anyone else who is prepared to challenge it. And it’s coming to Australia!

When Ram’s engineering team took on the task of designing the most powerful badass half-ton production truck to ever land on a showroom floor, industry rumour mills spun with speculation.

Did Ram have the Ford Raptor and Chevy Colorado ZR2 in its crosshairs? It would be christened the TRX, which some might decode as T-Rex, the undisputed assassin of the Cretaceous Period - Tyrannosaurus Rex, as Latin buffs will tell us, translates to “King.” 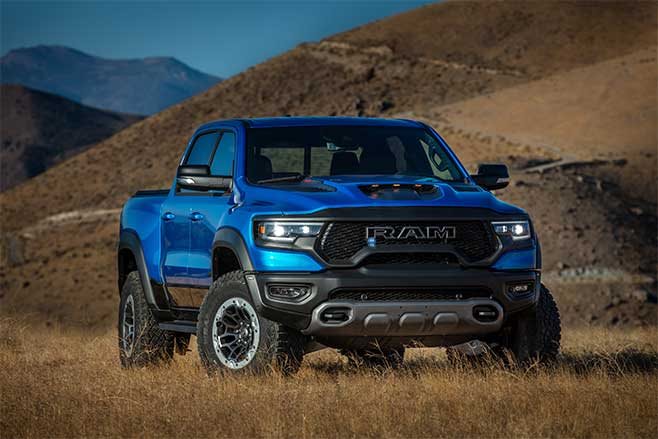 But how many ponies would be under the hood? Would its suspension, drivetrain and chassis be bred of the right stuff, with an insatiable appetite to devour the competition in a head-to-head confrontation?

When the chance arose to get our hands on an engineering vehicle for some seat time, we jumped on it as swiftly as a T-Rex scooping up a Velociraptor snack from the forest floor.

Standing eight inches wider at the shoulder than a base 1500, its stocky stance is immediately identifiable as out-of-the-box. Above the redesigned grille, its new bonnet features a functional hood scoop and LED marker lights. Recessed into the front ’guards behind the front wheels are additional vents designed to draw cool air into the engine bay. 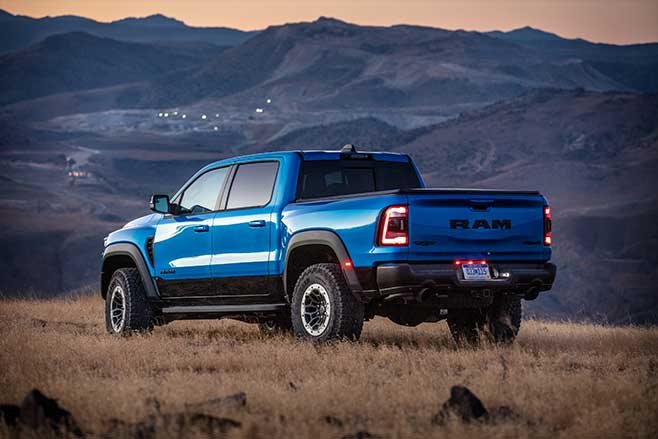 LED accent lights strategically wrap around the tailgate, where we find a backup camera. Up front are adaptive front headlamps (AFS), which will track with the steering wheel up to 15 degrees; a great asset when charging down desert roads in the wee hours.

Ram’s engineers understood that you can’t outrun the pack without a serious mill under the bonnet. The obvious answer was big V8, but they didn’t settle for just any high-displacement engine. The TRX draws its moxie from a 6.2-litre supercharged Hemi V8 adapted from its brethren Hellcat Dodge Challenger and re-tuned for off-road performance.

This fire-breathing monster cranks out an impressive 532kW and generates 882Nm of torque. The air intake on TRX’s hood drafts about half the air needed to satisfy the Hemi’s appetite, the residual 50 percent is received through the grille, the conventional manner. 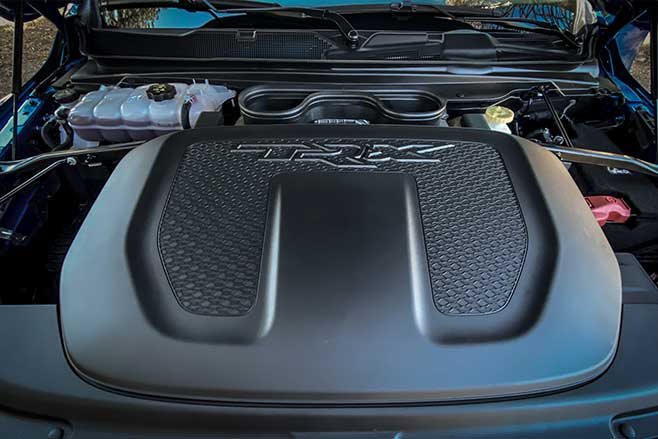 Backing the Hemi is a heavy duty TorqueFlite 8HP95 eight-speed automatic transmission, while a BorgWarner 48-13 full-time active transfer case distributes power fore and aft. The TRX is not designed as a rock crawler, but its 2.64:1 low range still offers a respectable crawl ratio.

The combination provides more than 330mm of travel at all four corners. When doing 160km/h across the desert, heaps of travel is of little benefit without a means of controlling. 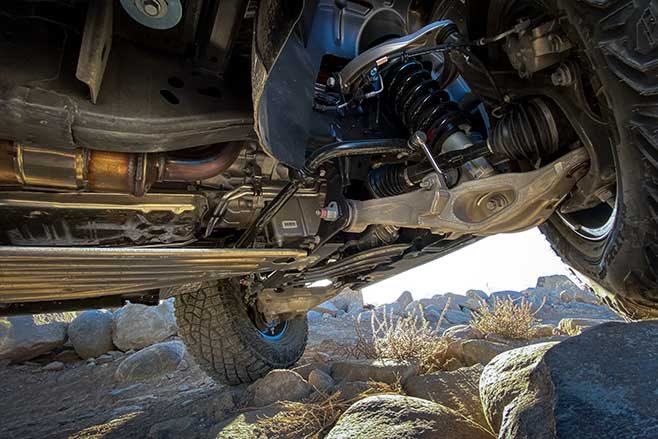 Working with Bilstein’s racing division, the engineers developed one of the most technologically advanced OE damping systems to date. Deemed the Black Hawk e2, or e-squared, the shock absorbers uses a 2.5-inch aluminium housing replete with electronically controlled valving and assisted with remote reservoirs.

The combination provides 300mm of ground clearance and a 813mm fording depth. Approach, breakover, and departure angles land at 30.2, 21.9, and 23.5 degrees respectively, and maximum payload/towing is 594kg and 3674kg.

The interior is nothing short of luxurious. Everything is wrapped in leather, carbonfibre accents abound, and the truck’s trademark red stitching exudes character. Firing up the 6.2-litre HEMI, the supercharger spools up with purpose and the instrument panel runs through its pre-flight checks. Gripping the flat-bottom wheel, one can toggle through the gears via brushed-aluminium paddle shifters at the fingertips.

Glancing toward the dash, the 12-inch Uconnect screen is your gateway to most controls, including a 19-speaker, 900-watt Harman Kardon audio system, navigational aids, driving modes (there are five), Sirius XM 360L, and vehicle vitals. The console contains a wealth of modern-day requisites, including USB ports, a wireless charging deck, and plenty of storage. 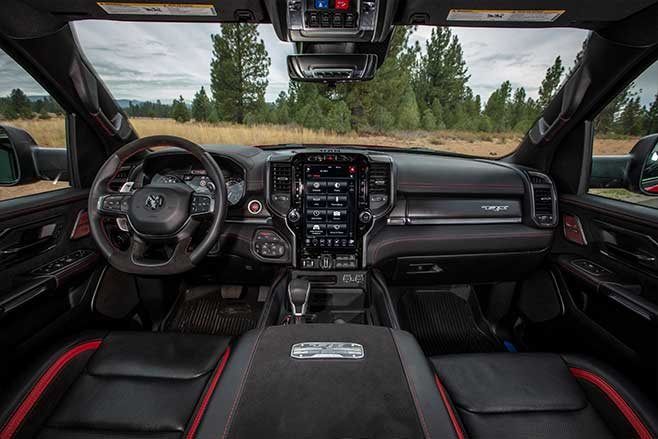 A personalized feature is the machined-aluminium badging at your elbow, which highlights the TRX’s horsepower and torque, engine specifics, and VIN. Another new feature is its Trailer Reverse Steer Control. With an eye on the backup camera, you can take your hands off the wheel, turn the dash-mounted dial left or right, and the system will guide your hitch ball home.

ALL YOU NEED TO KNOW: Ram TRX

In addition to a new digital rear-view mirror, the TRX features a heads-up display that can be programmed to project half-a-dozen stats in clear view over the dash (speed, speed limit, etc.). In addition to the normal array of safety features - ready alert braking, electronic stability control, blind-spot monitoring, etc. - there is also a 360-degree surround-view camera system.

We rolled out of Lake Tahoe basin as the sun was lighting up the great expanses of the Nevada Desert, and I can tell you the T-Rex wanted to run faster than a speeding ticket. Carving twisty mountains roads, the suspension hugged tight corners (at twice the posted limit) as flat as a flapjack and without protest. Steering was controlled and predictable, and instilled a feeling of confidence. 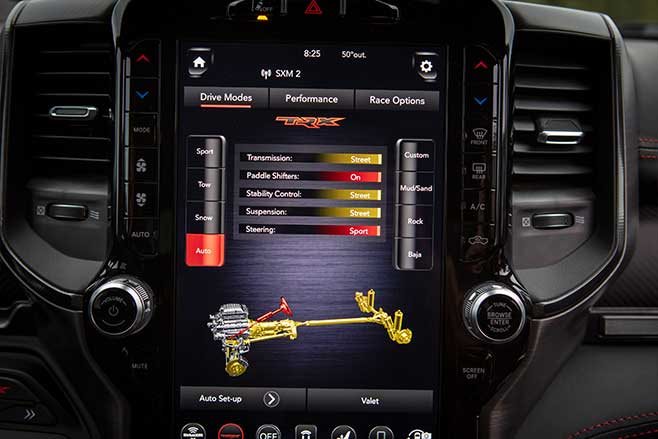 The supercharged TRX boasts a 0-96km/h time of 4.5 seconds. Wanna push the needle to 160? The TRX will get you there in 10.5 and propel you through the quarter mile in 12.9 seconds. Wowzah, this is not your granddaddy’s old Dodge. And that’s enough bitumen; let’s get to what this primordial predator was built for.

PREDATOR IN THE DESERT

Having grown up kicking around Baja, Mexico, and spending plenty of time suited up to chase a checkered flag, I immediately toggled into the off-road pages and selected Baja Mode. It is T-Rex’s most aggressive mode, loosening up biases on the transfer case and stability control, tweaking shift points, and tightening up throttle response. In my opinion, they should re-name it the Fun Mode, as it flat-out gets with the program.

Our venue was the Wild West Motorsports Park, home to Ultra4 events and miles of mountainous, fast, rocky two-tracks. Any time you get in an unfamiliar vehicle, especially in a truly powerful one, it takes time to get the feel for how the car will react in hard braking, high-speed drifts, and touchdowns from lofty heights. 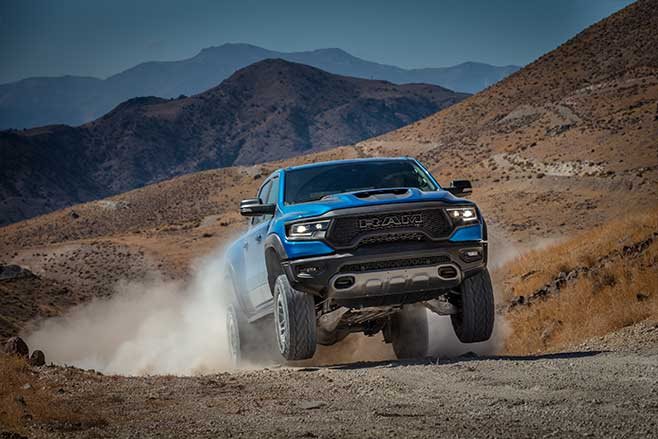 My break-in period was brief, as the TRX instinctively knew what to do. Tap the brakes and dog the wheel while diving into a turn and the rear end came around with control and prowess. Back on the throttle - with 532kW you only need a little - and it assumed a picture-perfect, controllable drift.

The electronically controlled Bilstein e2 damping system is downright impressive. Embedded rock, no problem. Whoop-de-dos, it ate them up like a velociraptor appetiser. Few, if any, factory platforms take kindly to returning to Earth from an altitude of a metre plus, but the T-Rex seemed to enjoy repeated landings at 100km/h, the e2 system absorbing the impact with ease and its nitrogen bump stops (jounce bumpers) handling the last inches in full G-out scenarios.

As for speed and torque, it was only a matter of massaging the skinny peddle to your liking and the supercharged Hemi delivered in spades. The last button I needed to push was Launch Control, which to no surprise has a dragstrip light tree on it. Yes, this is the button that unleashes the TRX’s fury and all its glory. 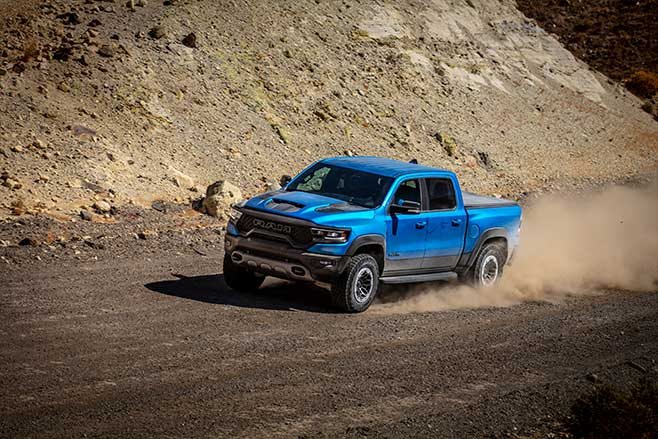 It’s been decades since Ram played in the go-fast desert scene, but when they finally decided to get back in the game they did it right. When the dust settled and I pulled off my helmet, I’m sure that my ear-to-ear grin matched the adrenaline rushing through my veins.

I can only say that Raptor and Colorado will need to change their air filters (and their shorts), as I predict the TRX will leave them in the dust. As for Baja mode, the rumour mill is already churning that the TRX might be gobbling up lessor competitors at next year in the Baja 1000. Yes, 4X4 Australia Editor Matt and I are putting our names in the hat to take T-Rex to the podium.

Ram trucks Australia hasn’t officially confirmed the TRX for its dealers, but Ram specialists, SCD Remanufactured Vehicles in Brisbane, says it will have it here by the New Year.

In the USA the TRX starts at US$71,690, but expect that figure to more than double once you convert the truck to right- hand drive and the dollars to Australian. Don’t be expecting any change from $180K, but you’re sure to have the quickest truck on the block. 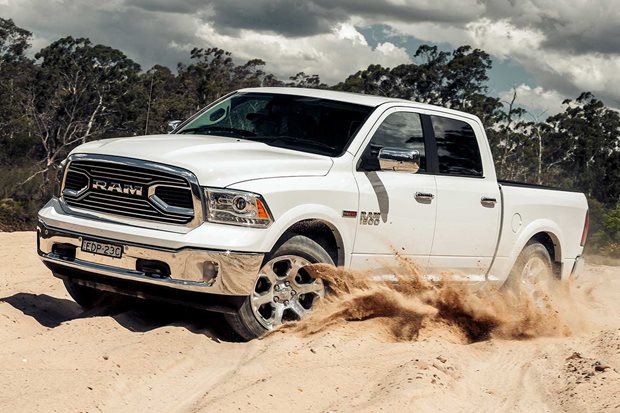 For those who want a turbo-diesel Ram 1500 Laramie, the wait is finally over. 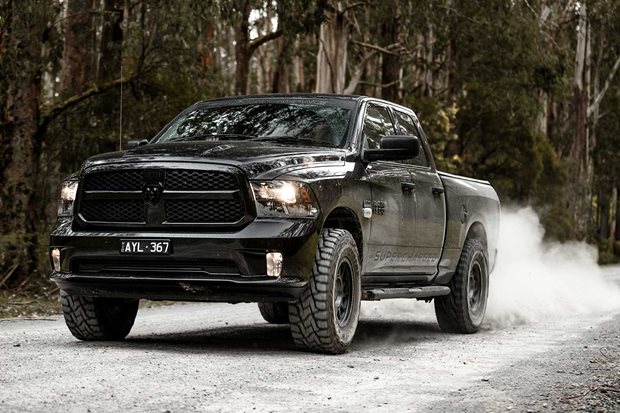 If a naturally-aspirated petrol V8 doesn’t deliver the torque you’re looking for, then a supercharger kit will provide the boost you seek. 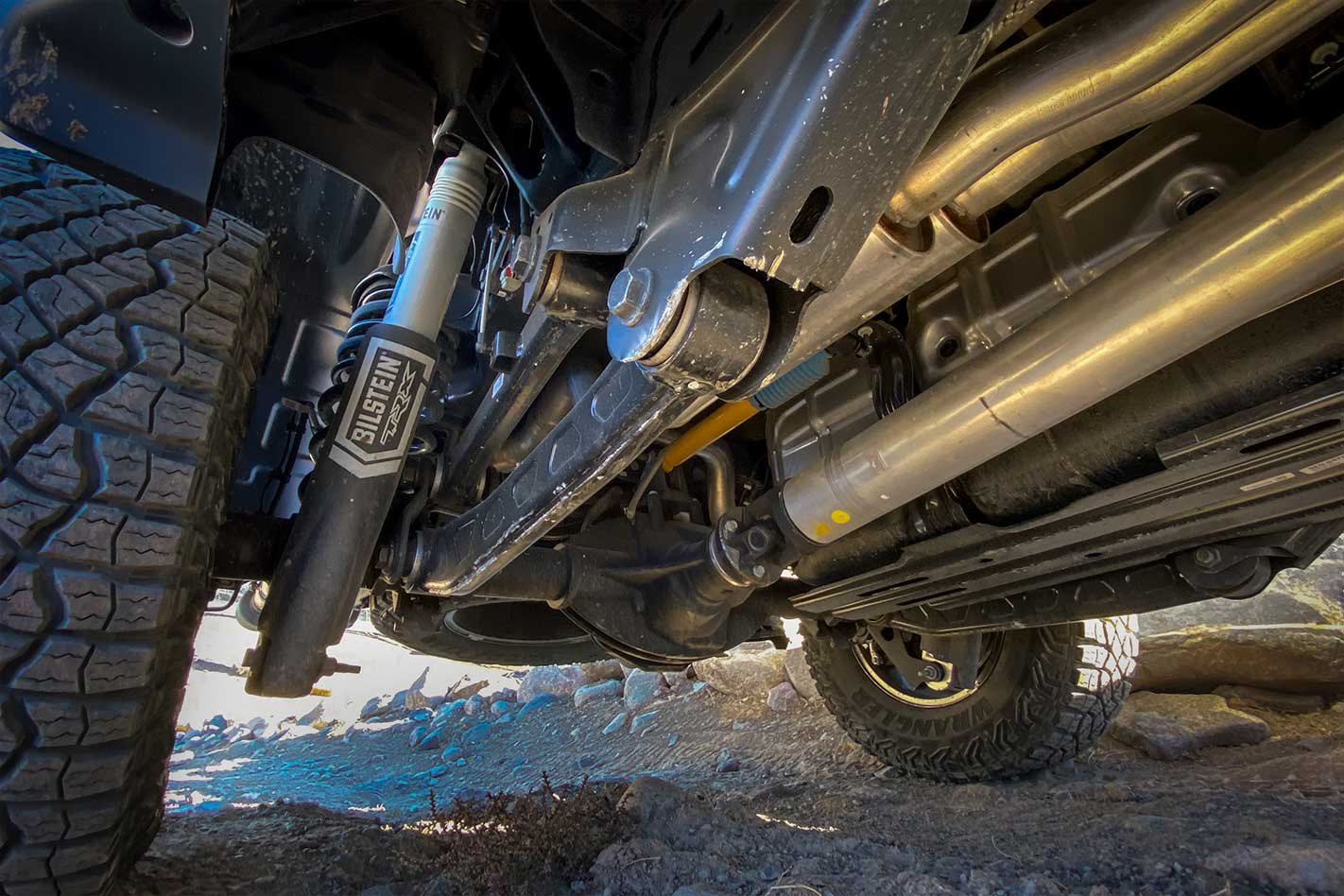 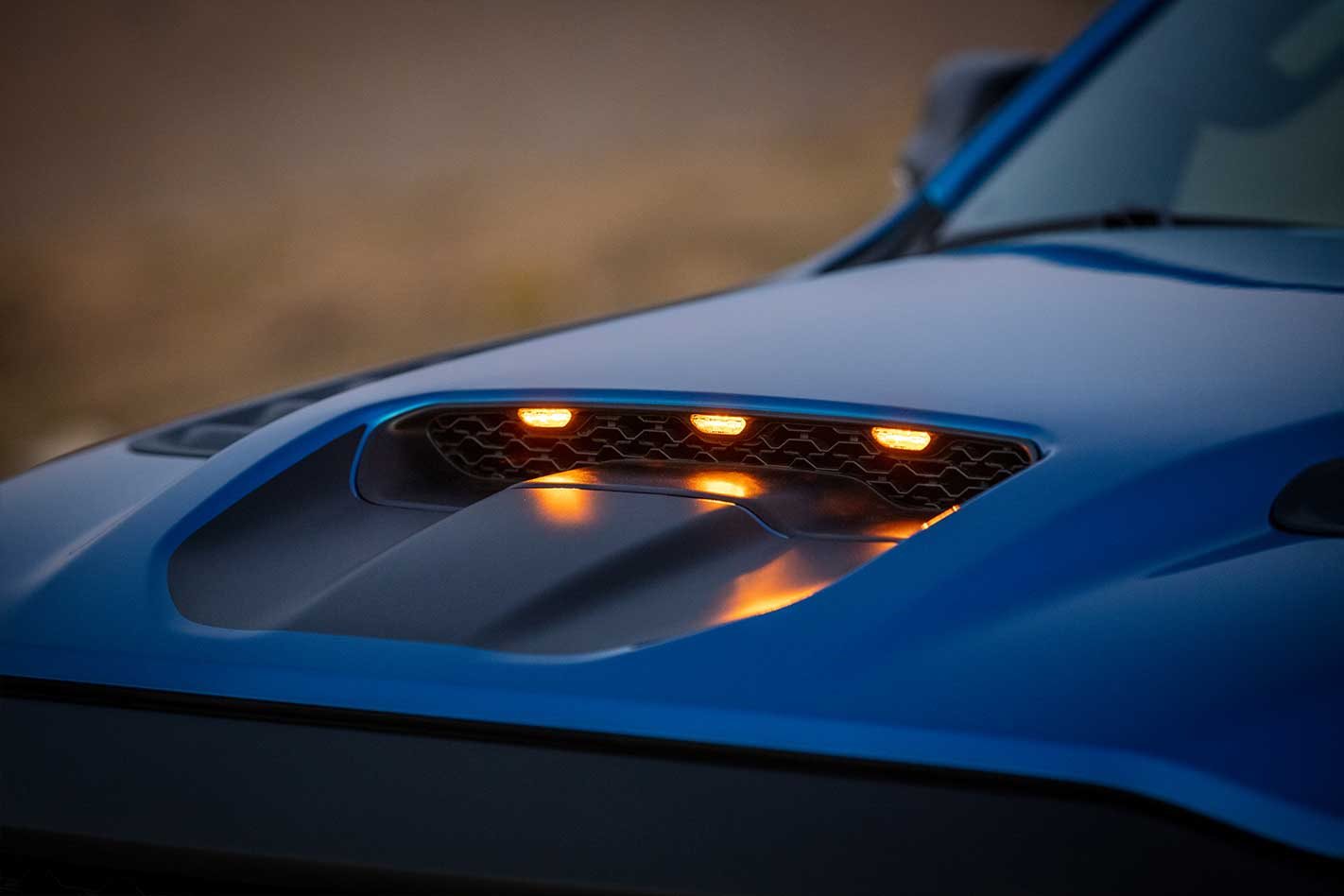 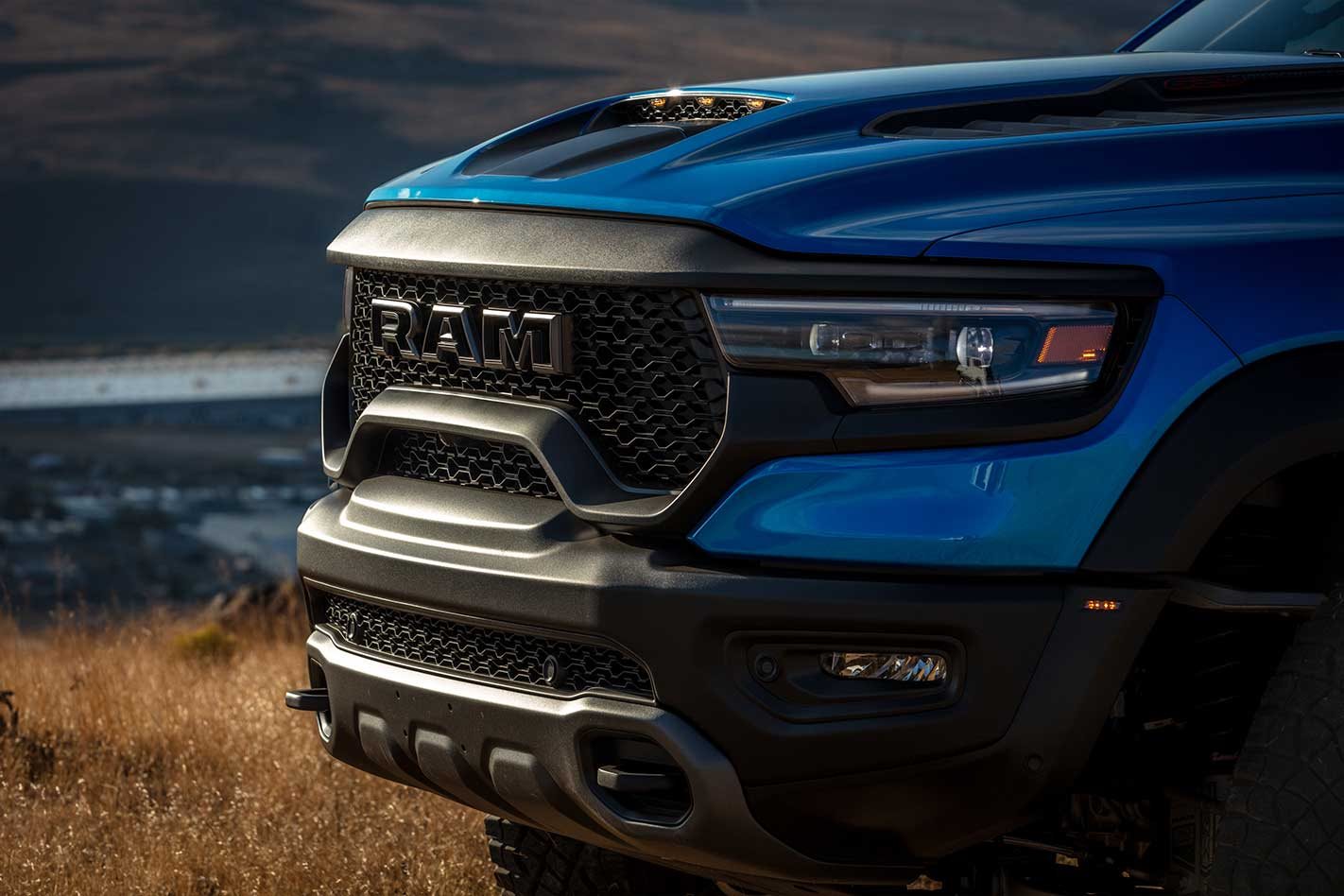 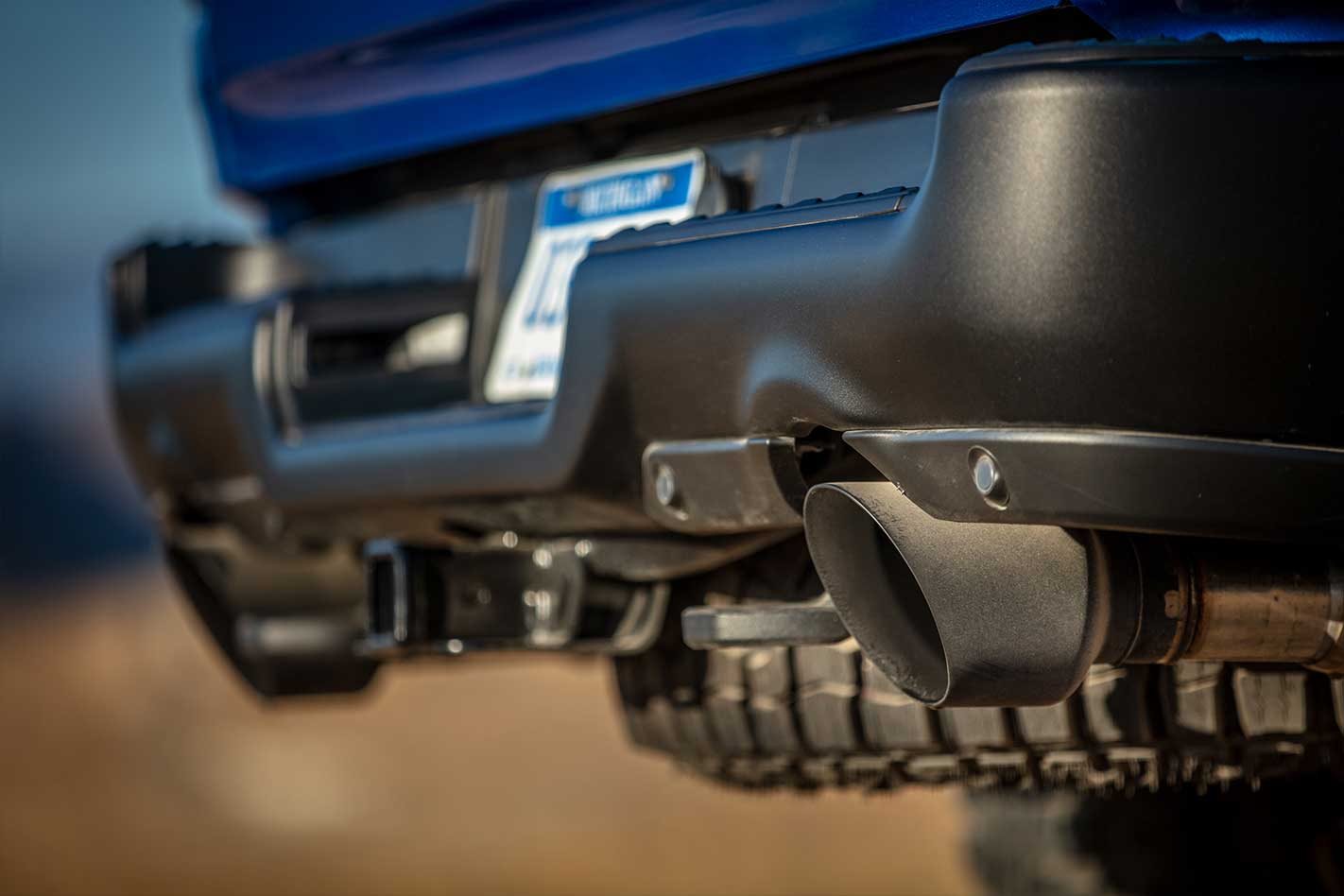 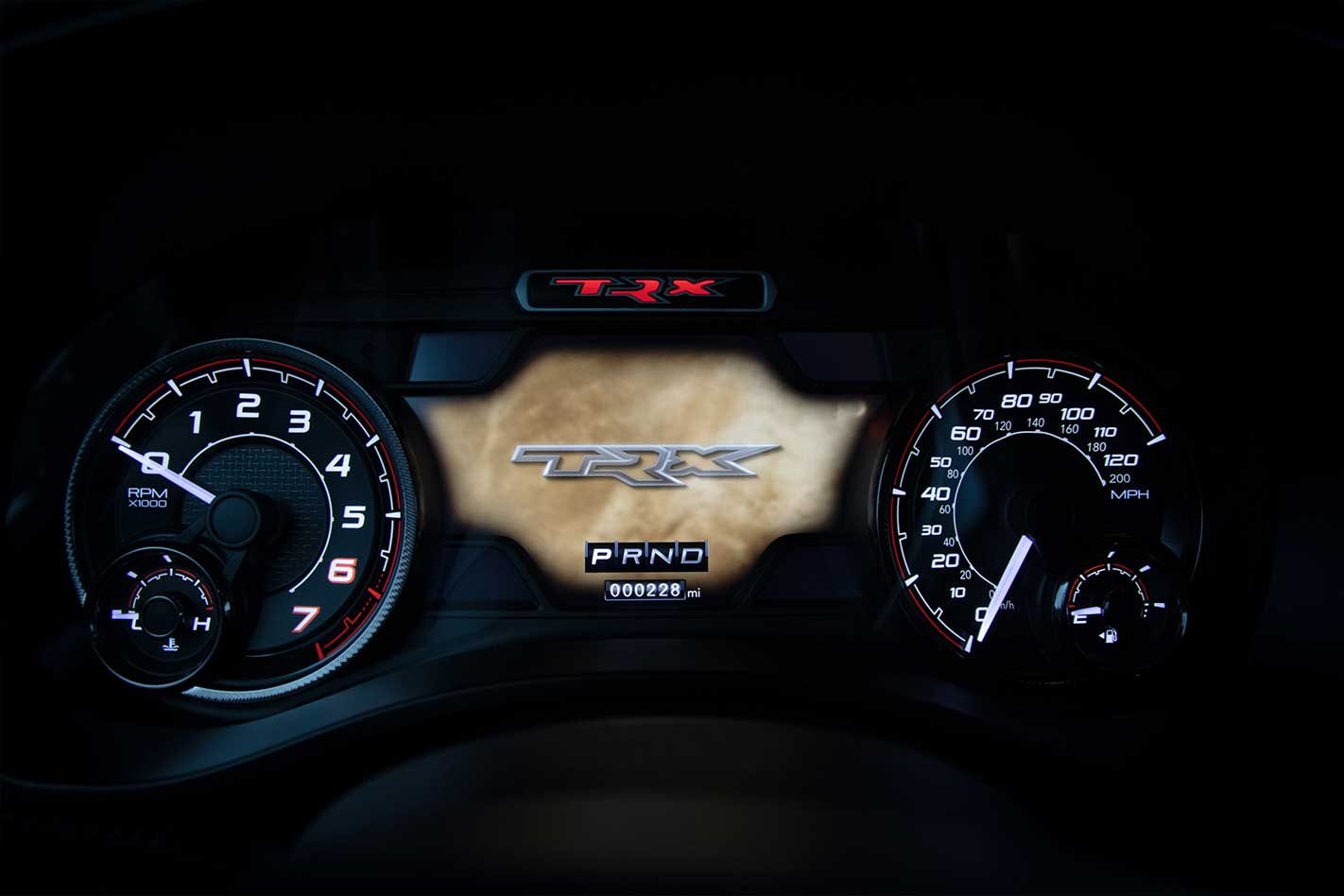 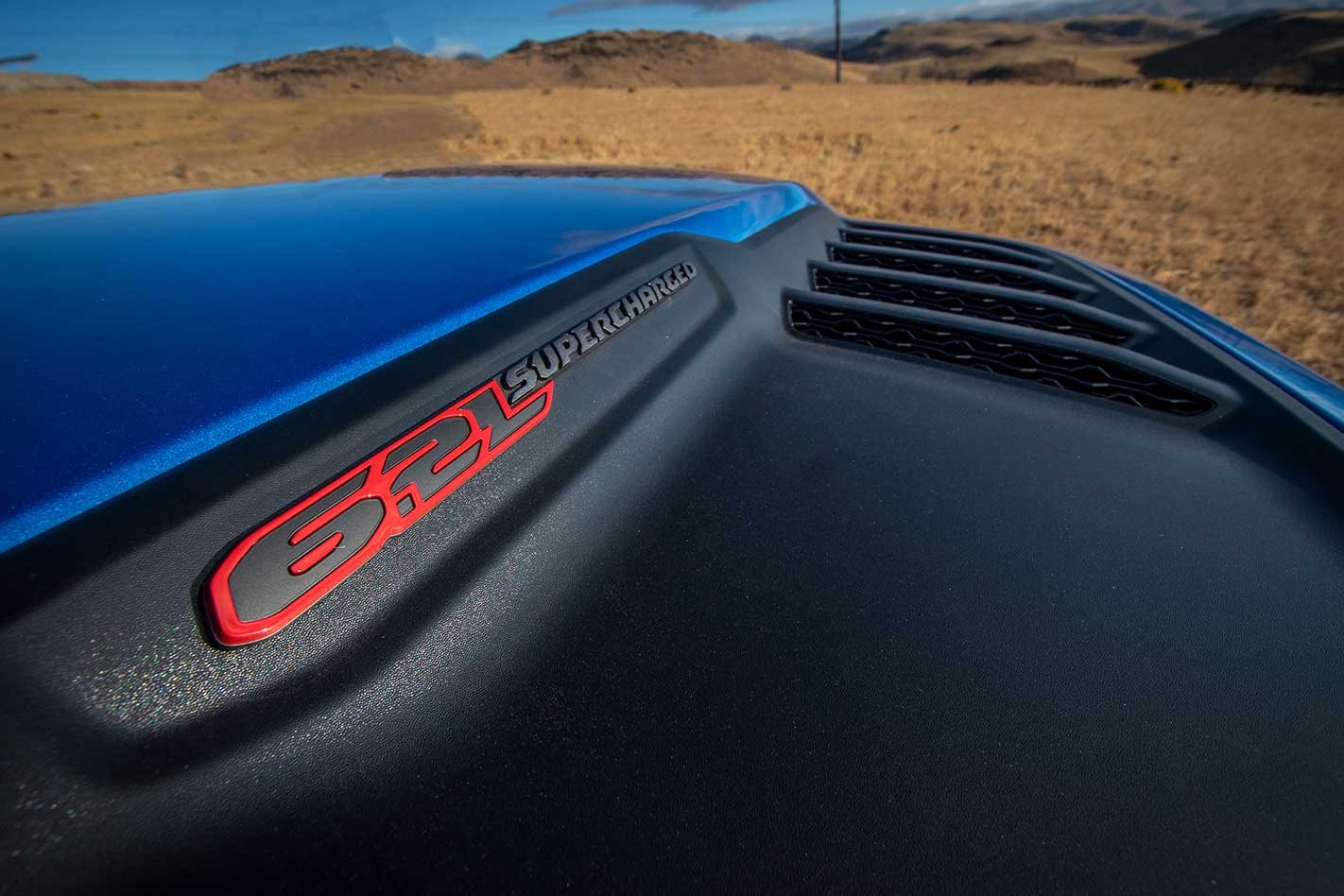 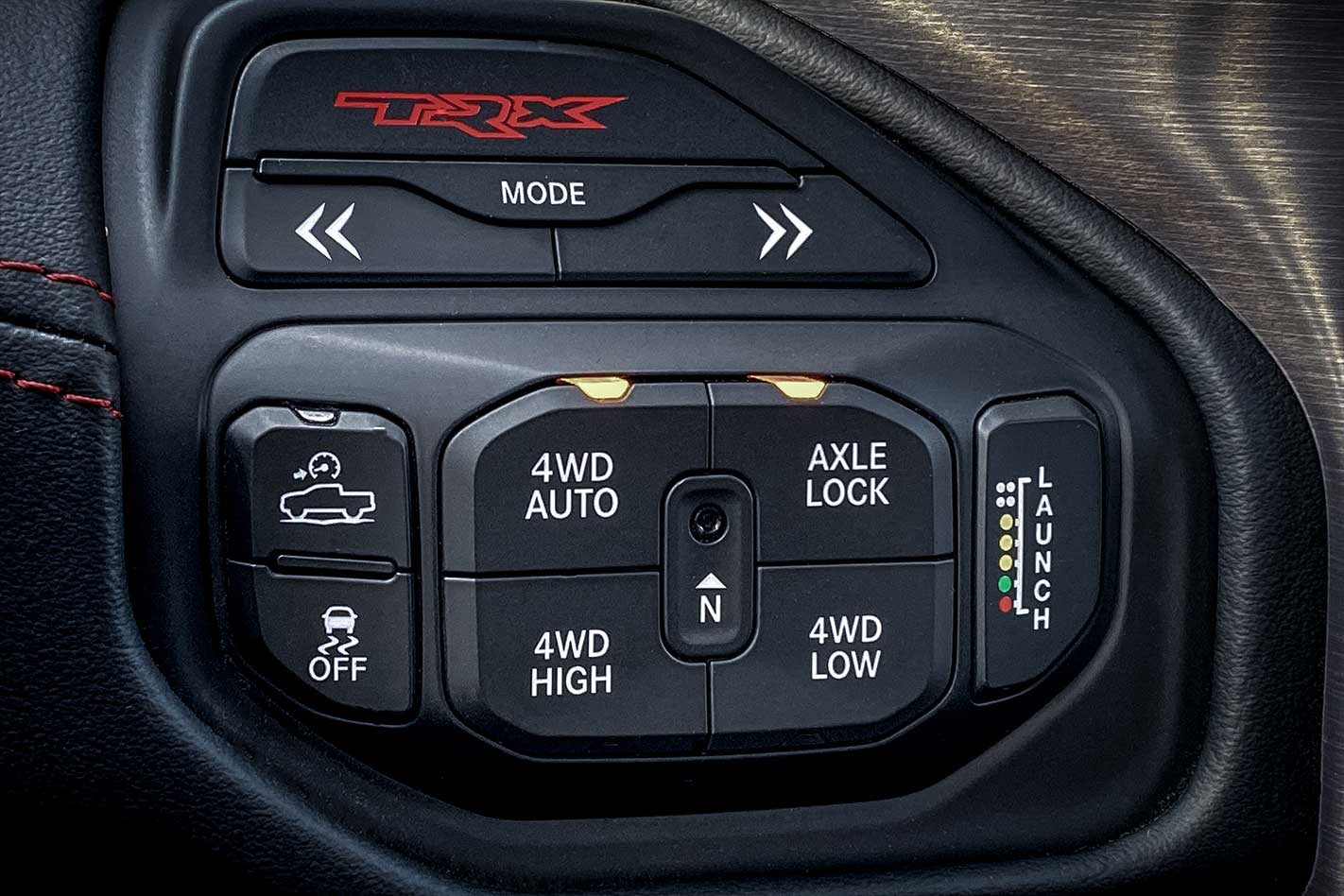 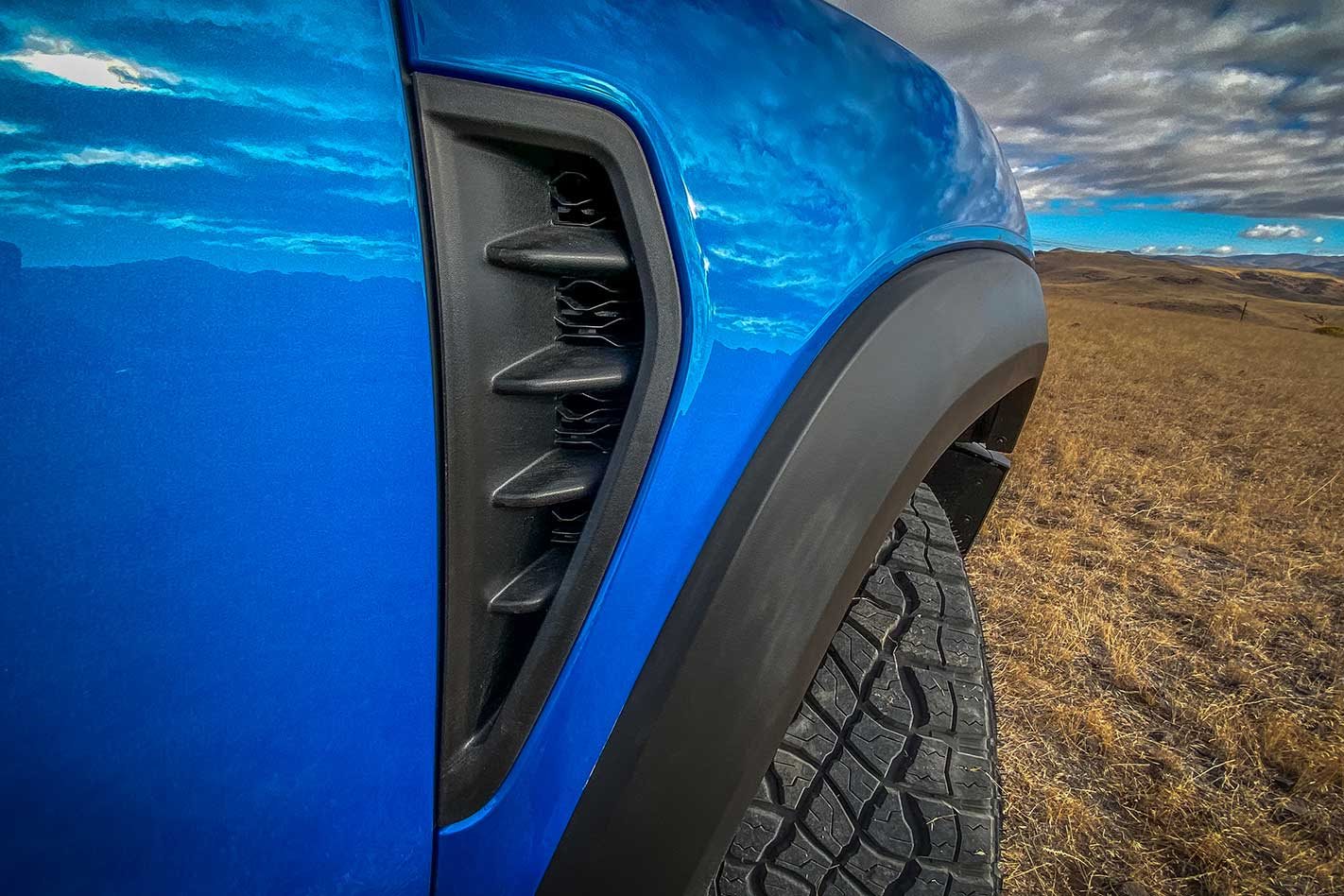 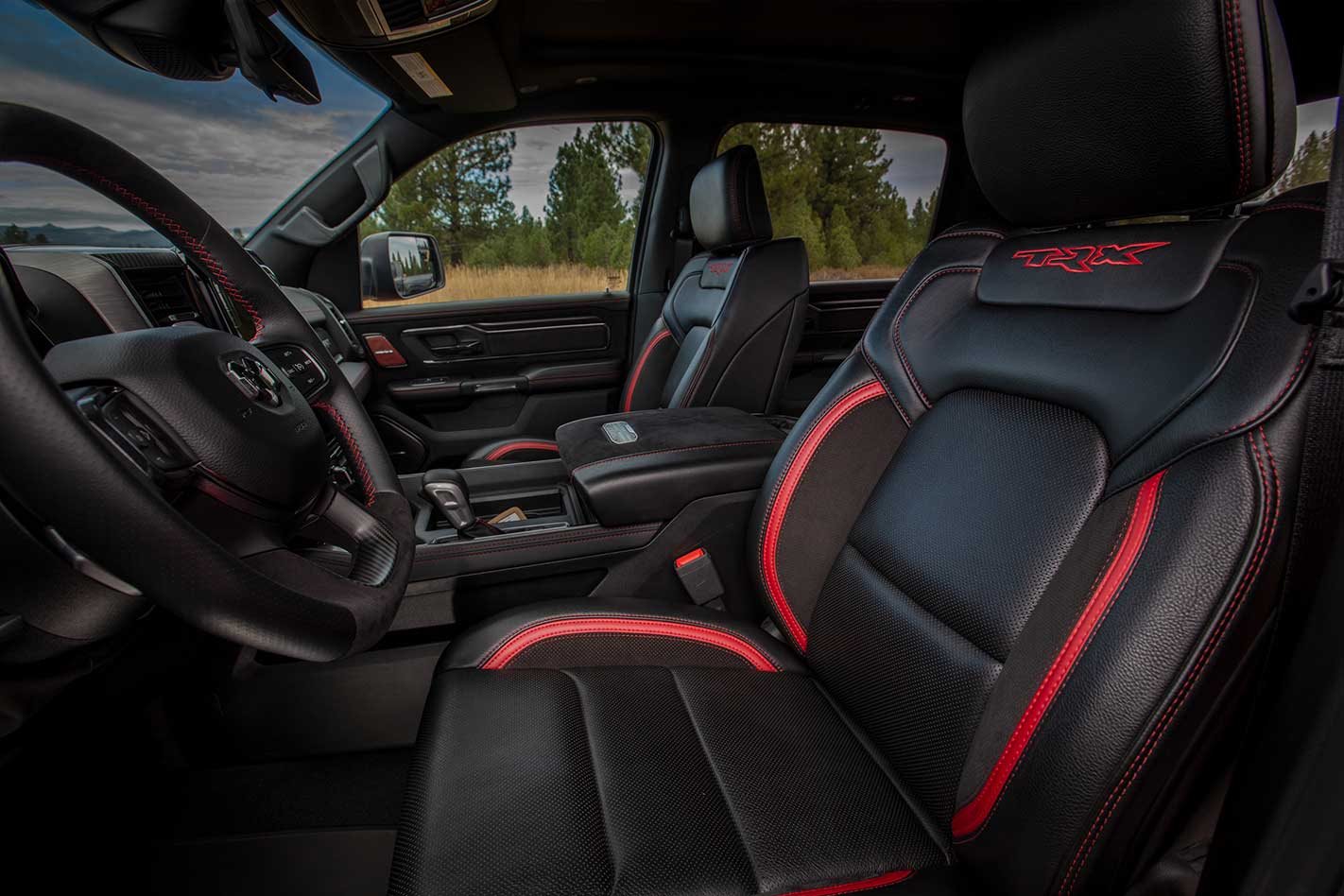 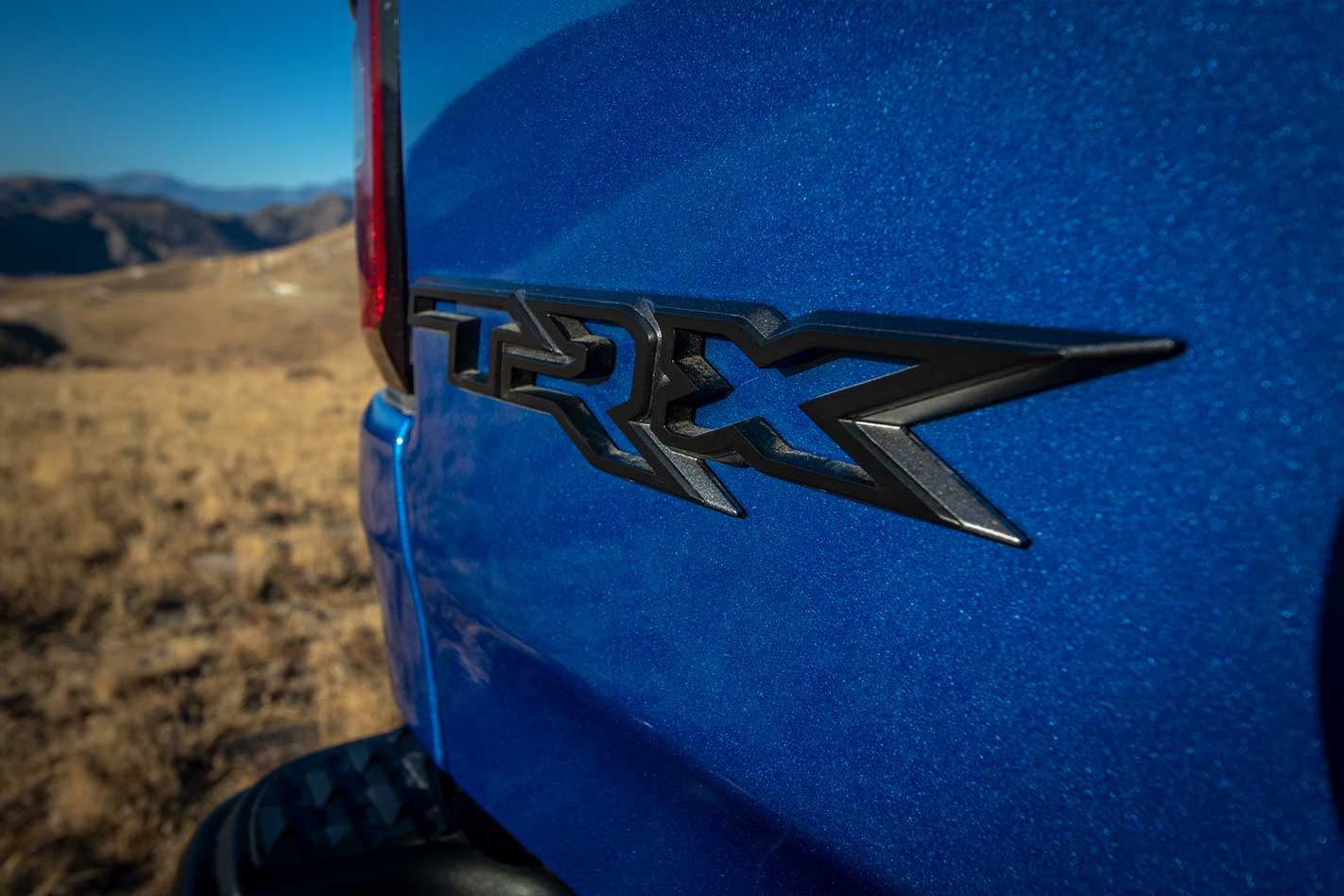 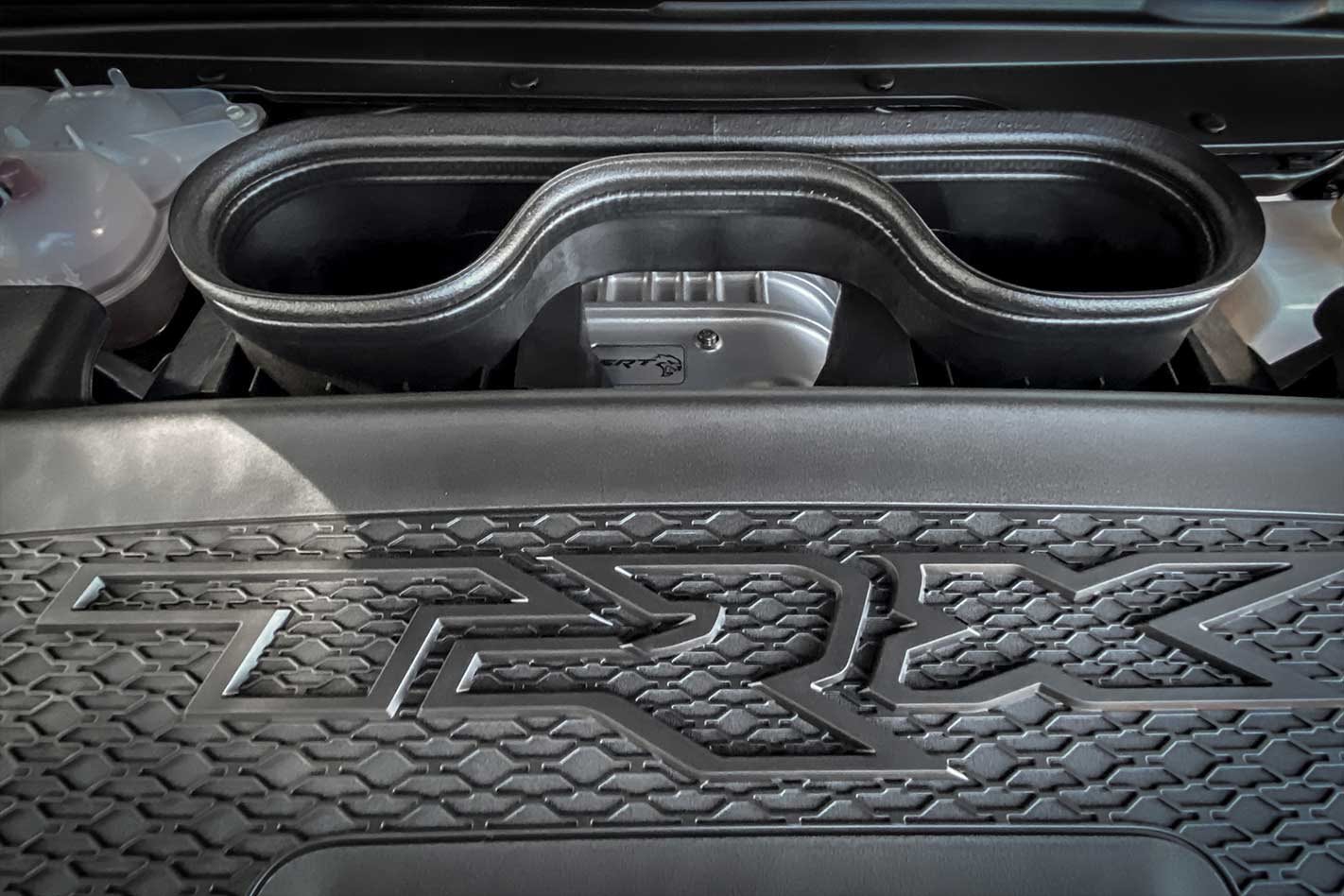 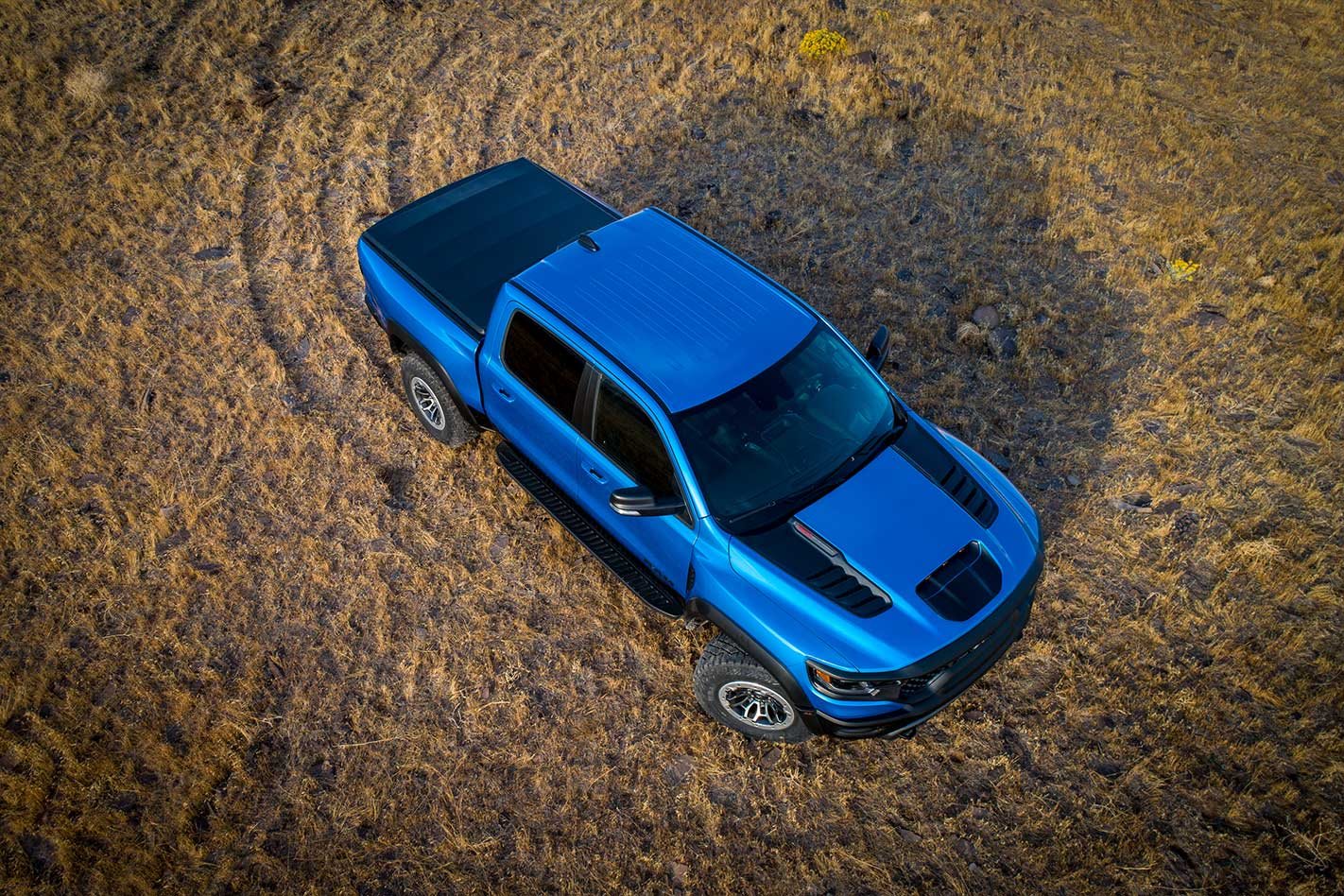 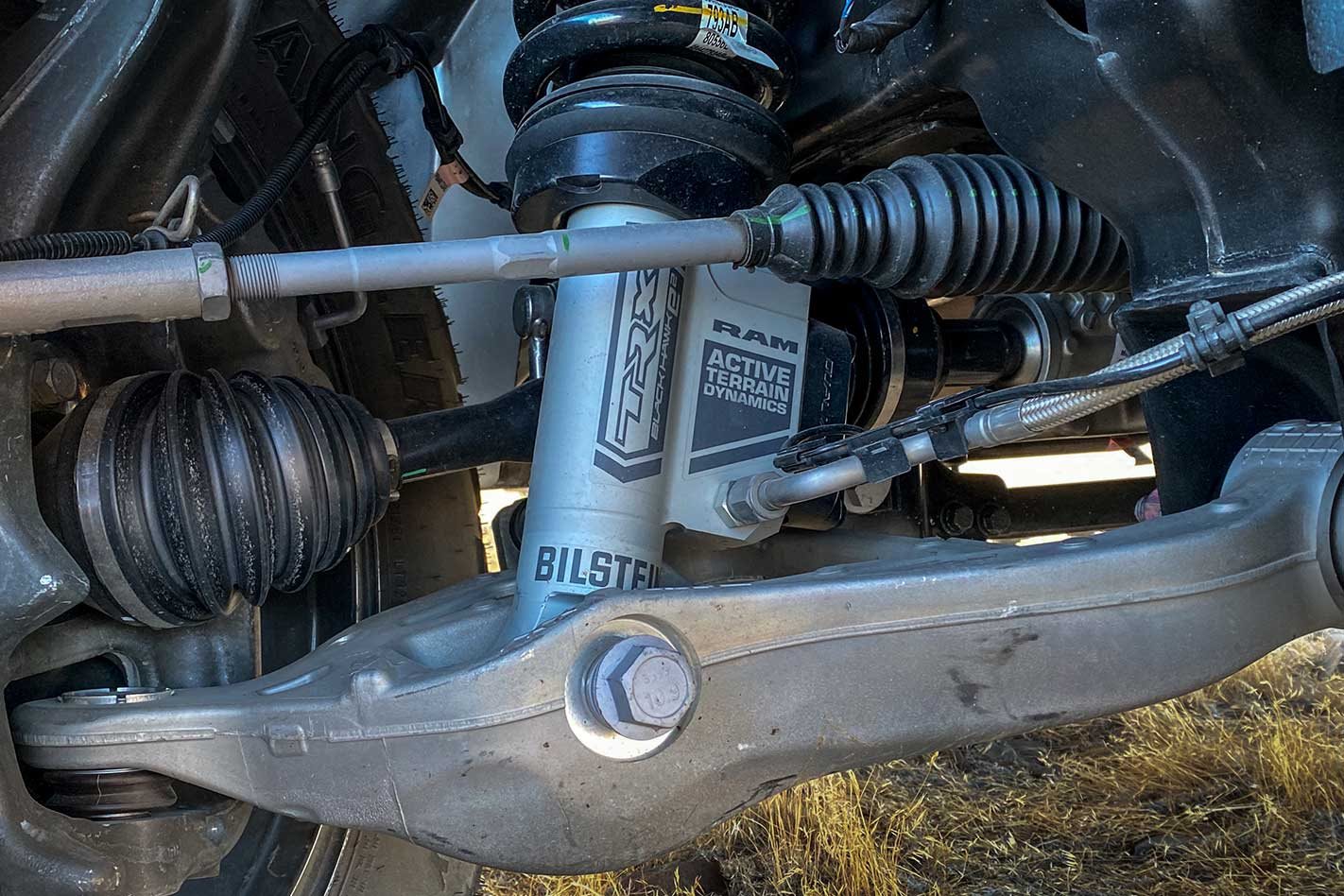