The D-Max is one of the oldest designs here, so is it up to competing with the new boys?

We test the Isuzu D-Max to see how its GCM, GVM and Payload fare against other industry icons.

LOAD TEST
You may notice that the D-Max has a new tailgate, new alloys and a ‘shark fin’ antenna. There are changes inside as well, with a new instrument cluster and larger touchscreen on the mid-spec variants, but that’s the extent of the D-Max’s most recent (MY15.5) updates. Along with the BT-50, the D-Max is the oldest design in our test group, bearing in mind that the Hilux, Navara and Triton are all-new while the Ranger and the Colorado have been significantly revamped – including mechanical changes – in the past year. 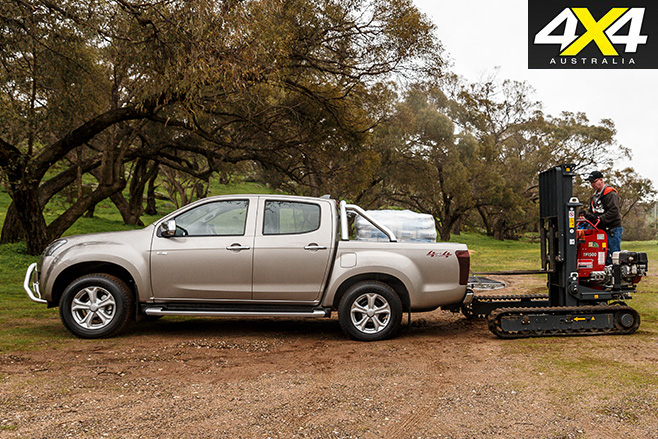 As in its earlier incarnation, the D-Max’s tub has four decently sized tie-down hooks, and with the 800kg load secured the rear ride height dropped around 60mm, as good as the best of its test rivals. Our total payload of 970kg (including driver, etc.) is 40kg to 80kg shy of the max figures for the various D-Max dual-cab 4x4 pick-ups.

With the 800kg pallet in the tub and heading up the hill, Isuzu’s D-Max felt a little nose-up

but it didn’t bottom out on any of the bumps. While this did make the steering noticeably lighter, the chassis was generally composed, stable and confident.

Not so good is the D-Max’s 3.0-litre engine, which feels the weight in the tub more than any of the rest in the test. While the maximum power of 130kW is competitive with the less powerful engines, its 380Nm of max torque is well short of all the rest. This lower torque output translates to less power off idle and at low revs, something you definitely don’t want when hauling a big load up a steep hill.

The D-Max still got the job done, it just had to work harder at it than the others. It is, after all, a much older engine than those powering its rivals. The engine refinement is also nothing special in this company, although I’d still note that it isn’t bad. 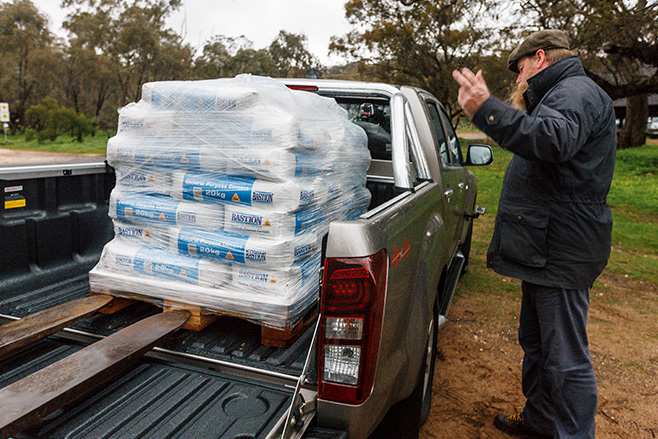 The five-speed auto also does the engine few favours. Not only does it have fewer ratios than all but the Triton, there’s nothing flash about the way it shifts up or down on the hill. Like the engine, it’s an older design.

The flip side to all this is that the D-Max’s engine is a reliable, established design that has done more than a few laps. Likewise, the gearbox is well proven and comes from an Aisin gearbox family previously and widely used by Toyota in its Prado and LandCruiser models.

With the deadline for Euro 5 emission compliance looming, Isuzu will have to do something engine-wise for the D-Max for MY17, even if it’s just the addition of a diesel particulate filter. Perhaps the changes will run deeper than that and there will be more power and torque as well. Only time will tell.

TOW TEST
The unassuming D-Max took our load reasonably well. Its bum sagged a little under the weight, but there’s a stoicism about the Isuzu that gives you the impression it will have a crack at just about anything.

However, in the current competitive climate the D-Max is seriously challenged by the performance and refinement onslaught of vehicles in this segment. The venerable 130kW/ 380Nm powerplant aims to please but in this company is left wanting. And, like the Navara, it also lacks trailer sway control. 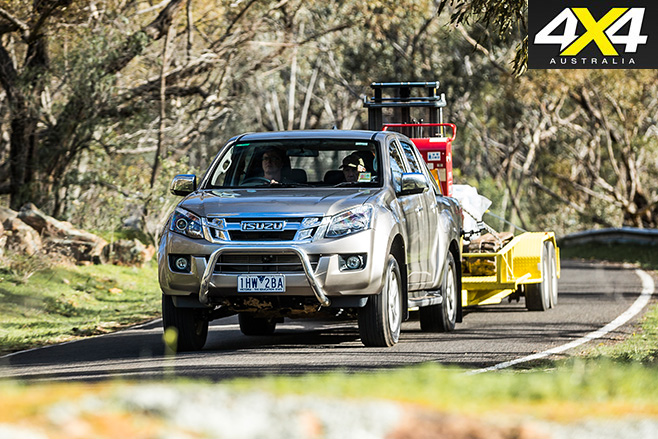 The generational lag between the Isuzu and the rest of the flock is very apparent at max weight. On the uphill drags the D-Max roared, clambered and snorted while falling short of its rivals’ performances. The tacho hovered at 3000rpm in second gear – and there it stayed as the D-Max hauled itself up the hill.

The rear end also had a tough time.

There was a bit of bump steer out back, but the steering remained reasonably composed and the Isuzu was easily controlled on the up and the down. Again, the five-speed self-shifter may be tough but it’s not the most intuitive bit of gear. 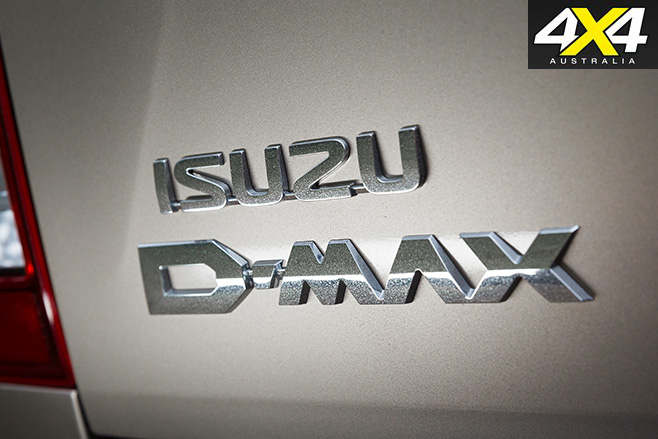 On the upside, the engine did help to hold back our load on the downhill runs once there was some manual intervention with the ’box. You do get the impression, however, that the D-Max would take this sort of beating day in and day out without a hiccup. 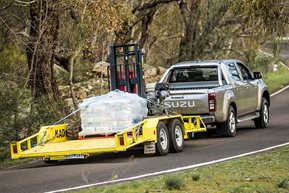