Our annual Best in Class awards have taken a new twist this year. For 2015, we will look at each class in greater depth, instead of announcing each class winner in one large feature. First up are the medium wagons, specifically the diesel variants. Gathered here for this comparo are the pick of the crop: Jeep Grand Cherokee, Land Rover Discovery and Toyota Prado.

The Best in Class award is based not only on this current test, but previous testing of different variants of these models under a broad range of conditions. The award’s also based on resale valve, service costs, service back-up and aftermarket accessory support. After putting these diesel rigs through the wringer once again, here’s our verdict.

It may be near the end of its life cycle but Land Rover’s Discovery still has all the hallmarks of modern design.

What you see here is effectively a Discovery 4, although Land Rover has now dropped the ‘4’ designation in readiness for a bout of new models, where Discovery will be a product portfolio rather than a specific model.

The Discovery 4 is heavily based on the Discovery 3, so this current Discovery is in effect the end-product of 12 years of evolution. It’s old, but certainly doesn’t feel like it. In fact, it just keeps getting better.

The latest significant inclusions; the 155kW and 520Nm 3.0-litre bi-turbodiesel and accompanying eight-speed automatic gearbox – that arrived for the MY13 model year – are the key to this particular ‘TDV6’ variant, which is the least expensive in the range. It starts a $69,330, an entry point that’s still well-above the least expensive Prado diesel (the $55,990 GX manual) and entry-level Grand Cherokee diesel (the $53,000 Laredo).

So what makes it a winner?

The TDV6 may be the less-powerful of the two diesel engines but it rarely feels wanting, despite the Discovery being a heavy vehicle. In general driving the TDV6 feels quite spritely, and for this you can thank its maximum torque of 520Nm being available from as low as 1500rpm. You can also thank its brilliant eight-speed automatic gearbox, with its broad spread of ratios beneficial for initial pick-up and long highway legs. The engine is smooth and quiet, and the excellent refinement is echoed in the quick, decisive and ultra-smooth shifts from the eight-speed.

As the Disco is heavy and tall, you’d expect its handling to suffer. You do feel the weight in very tight corners, but otherwise the Discovery’s dynamics – thanks largely to the well-sorted steering and fully-independent suspension – are engaging and offer reassuring stability with a cosseting and quiet ride.

For a chassis that works so well on-road, the Discovery is amazing off-road. The key here is that, despite the suspension being fully independent, it has decent wheel travel. Add in its ability to be ‘lifted’ off-road via the height-adjustable air spring, its highly sophisticated electronic control systems, deep low-range gearing, ‘smart’ shift protocols of the eight-speed and a commanding drive position, and the Discovery is highly capable. To give its best off-road performance, however, it needs the optional ($1060) self-locking rear differential.

The Discovery’s cabin sets the standard in its class for space efficiency and comfort. For the money, though, it’s not well-equipped and at this spec level doesn’t come standard with third-row seats or sat nav; both costly options. This latest Discovery hasn’t been ANCAP rated, so by default it carries over the four-star rating of the Discovery 3.

There are two weak points with the Discovery in terms of practicality. The 19-inch wheel and tyre package isn’t ideal, and the fuel tank is too small. The latter is easily fixed via aftermarket enhancement while the former can be alleviated, but not solved completely, by tyre choice and a bespoke 18-inch aftermarket wheel.

The Discovery TDV6 wins here thanks to its unique and standard-setting combination of on-road finesse, off-road capability and its clever cabin. At this entry point, though, it’s neither cheap nor perfect, but it’s still the yardstick. Let’s hope when it’s replaced in 2016, Land Rover comes up with something as good, if not better.

The Prado is starting to show its age, but its core values remain undiluted.

With prices ranging from $55,900 for the five-seat GX manual, to $92,120 for the lavishly equipped Kakadu, there’s a Prado for everyone – from the commercial-fleet buyer to the well-heeled business executive. The most popular model is the GXL automatic; the variant we will mainly be focusing on.

The Prado is powered by a four-cylinder turbodiesel; its opposition in this test are both V6-powered. What’s more it claims a modest 127kW of power and an equally modest 410Nm of torque; well short of even the ‘detuned’ 155kW and 520Nm of the Discovery, or the 184kW and 570Nm of the Jeep. The Prado is also shackled by its ageing five-speed automatic, whereas the other two have what is effectively the same state-of-the-art eight-speed automatic.

The result is adequate but far from inspiring performance and, in this company, the Prado’s refinement is average at best. When driven in isolation the Prado is far more convincing, but it doesn’t compare well when driven back-to-back with either the very-polished Discovery or the slick-and-quick Grand Cherokee. Good fuel economy, though.

The same goes for on-road dynamics and ride. The Prado is plush on all surfaces and well isolated from road noise, but it lacks the stability and the agility of the sportier Discovery and the near sports car-like Grand Cherokee.

Head into the bush, however, and the Prado reveals a different side to its personality. It’s capable, comfortable and thoroughly relaxed. It’s softer riding than the Discovery, which gets firm when the suspension is raised, and in a different league than the Grand Cherokee, which is particularly harsh when its optional air suspension is jacked up. The Prado could do with more clearance and deeper low-range gearing, though.

All Prado variants, from the first of the 150 Series, have a maximum five-star safety rating; a bonus here against the four-star rated Grand Cherokee and unrated (but, by default) four-star Discovery.

The Prado’s cabin is comfortable and reasonably spacious, although the third-row seats eat into the luggage space too much and aren’t as well arranged as the 120 series’.

Except for its lower 2500kg tow rating, the Prado is a clear winner in terms of its practicality. A sensible wheel and tyre package, generous fuel capacity and no shortage of aftermarket support are all positives that the others can’t match. Add in Toyota’s more extensive dealer network and it’s the first vehicle you’d pick for an outback expedition.

If you’re looking for a thoroughly practical 4x4 wagon you can’t go past the Prado. With a more modern and sophisticated powertrain and sharper dynamics it would be the overall winner. As it is, however, the Prado is certainly showing its age. It will be interesting to see what Toyota come up with when the 150 Series is finally superseded.

*Based on the 150-litre tank, test consumption and 50km ‘safety margin’.

The latest iteration of the Grand Cherokee arrived here in mid-2013 with a new ZF eight-speed automatic gearbox; essentially the same ’box in the Land Rover Discovery. At the same time the VM Motori-sourced V6 turbodiesel engine was tweaked to provide more power and torque and a smoother power delivery.

The Grand Cherokee is based on a platform with fully-independent suspension, one shared with the Mercedes-Benz ML; a hangover from when Chrysler (Jeep’s owner) was itself owned by Mercedes. Depending on the model, or the options fitted, the Grand Cherokee has height-adjustable air springs or coil springs and comes with or without a rear locker. These are make-or-break factors when it comes to the Grand Cherokee’s off-road ability (see breakout).

With its punchy engine and slick eight-speed automatic, the relatively small and light (in this company, anyway) Grand Cherokee diesel is the clear performance winner. It will show a clean set of heels to the other two, anywhere, anytime.

The powertrain is also highly refined, although the engine isn’t quite as smooth and quiet as the Discovery’s. It’s got decent fuel economy too, though the actual on-road consumption doesn’t reflect the excellent ADR figure of 7.5L/100km.

The Grand Cherokee’s willing engine performance is matched by sharp handing that’s noticeably sportier than both the Discovery and the Prado. One benefit of the height-adjustable air springs is a lower ride height at highway speeds which improves handing and the aerodynamic penetration. The 18-inch wheels, rather than the optional 20s, provide surprisingly plush ride comfort.

The Grand Cherokee’s spark starts to fade when it leaves the blacktop, however, due to its limited wheel travel. That’s where the rear locker comes in to negate this problem and, without the locker, the Grand Cherokee is a very modest off-road performer.

Without the height-adjustable air springs, clearance is also a problem and, while the air springs negate this, the ride can be harsh and noisy when the vehicle is jacked up. With the air suspension and the rear locker, the Grand Cherokee is capable off-road but it lacks the comfort and the relaxed off-road demeanour of the other two.

The Grand Cherokee also has the least off-road friendly driving position in this test – it feels more like passenger wagon that a traditional 4x4.

The Grand Cherokee’s smaller cabin doesn’t offer third-row seating like the other two and it has the least amount of luggage space, though it’s otherwise very comfortable. Its long list of standard inclusions put it well ahead of the other two in terms of kit for money. And surprisingly for recent design, the Grand Cherokee offers four rather than five-star ANCAP safety.

Positives here include a decent fuel range and the availability of a practical (265/60R18) wheel and tyre package that can be fitted right across the range. Not so good is the odd (245/65R18) spare on a steel wheel, the air intake under the bonnet lip and the fact that a front recovery hook is a dealer-fit accessory. Of the three vehicles here, the Grand Cherokee is also the least supported by the aftermarket.

The Grand Cherokee is all about value. The base-model Laredo is a bargain at $53,000 (plus on-road costs) and an additional $4000 will get you the two key options; height-adjustable suspension and the off-road pack, which includes the rear locker. It’s also the best on-road drive here. 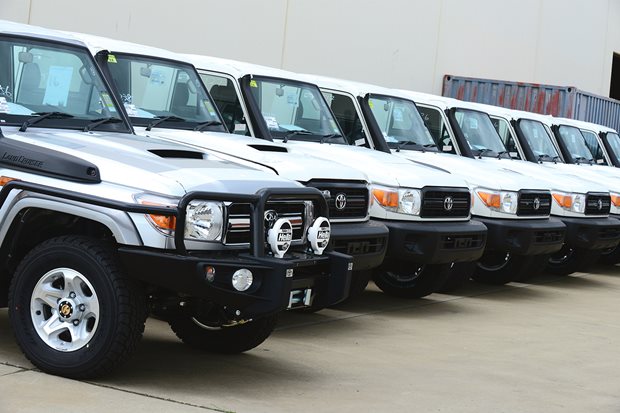 The more planning you do before buying a new 4x4, the more chance you have of getting what you want. 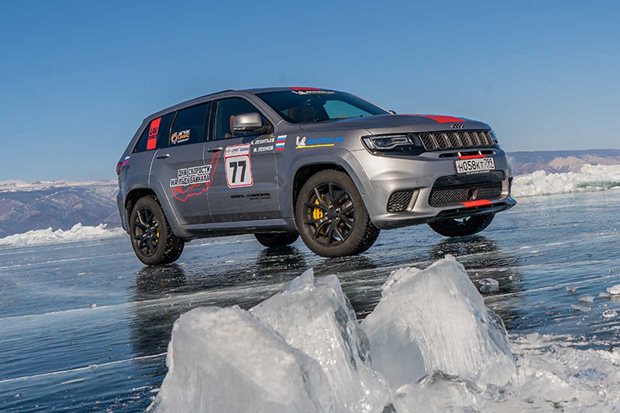 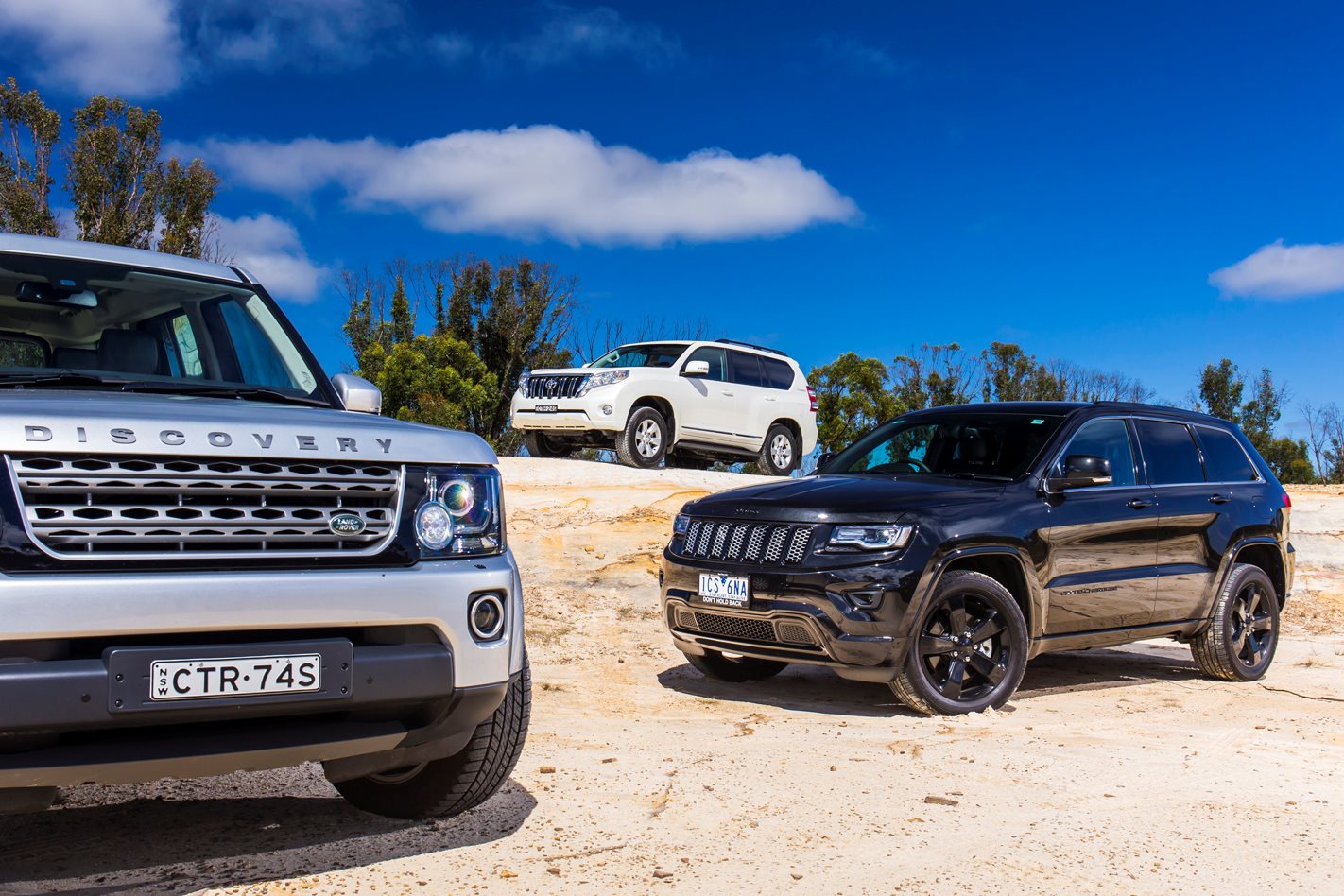 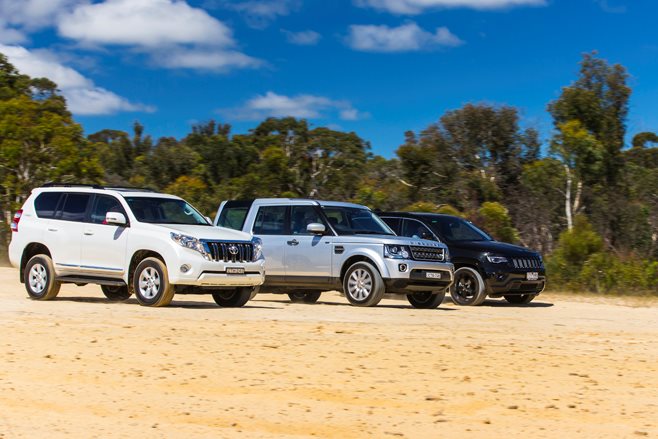 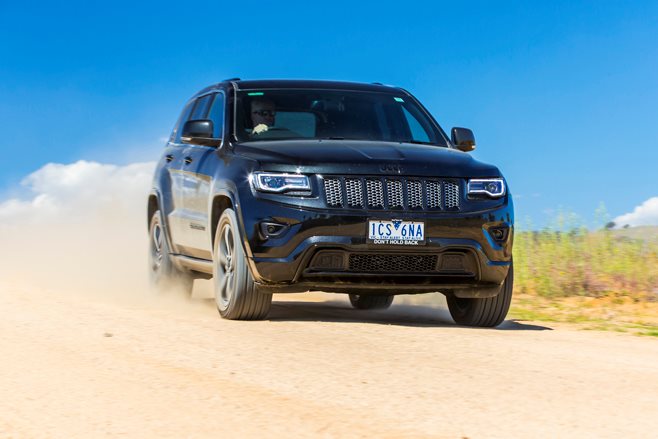 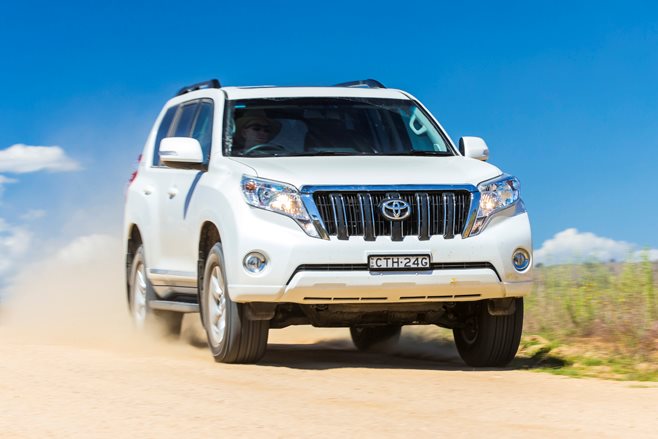 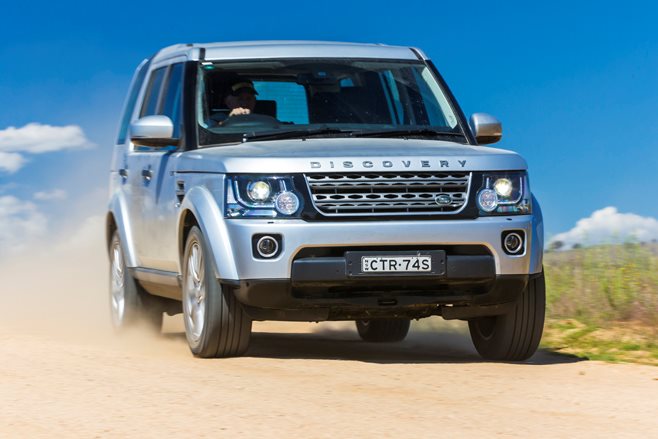 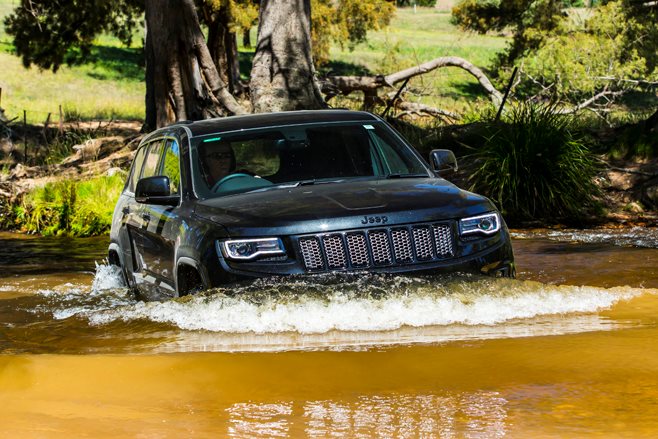 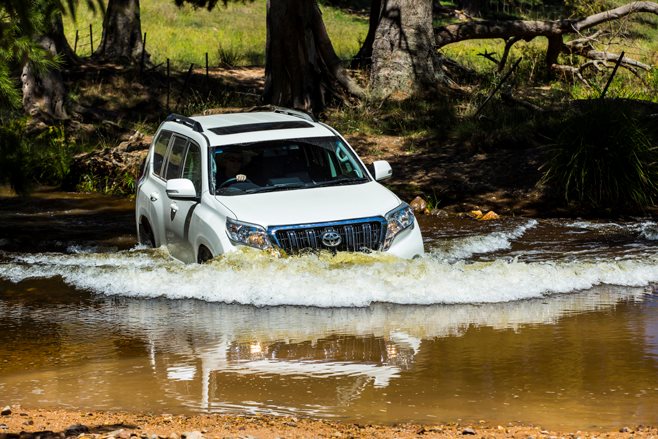 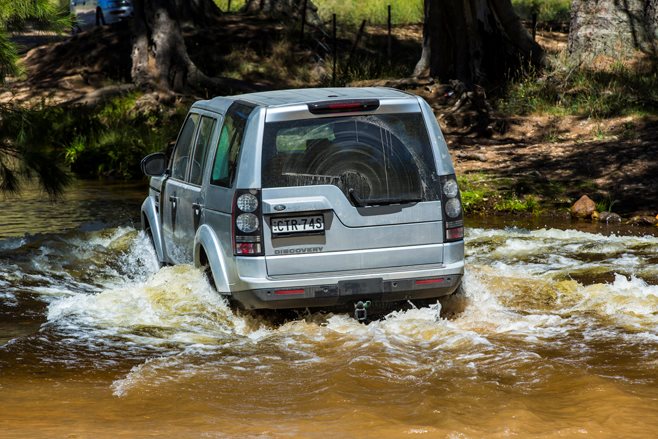 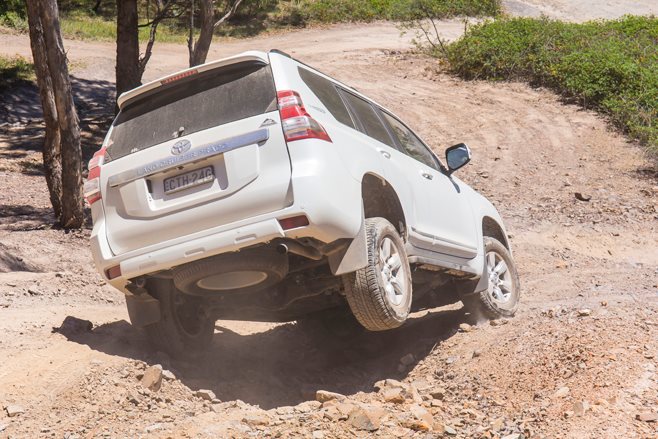 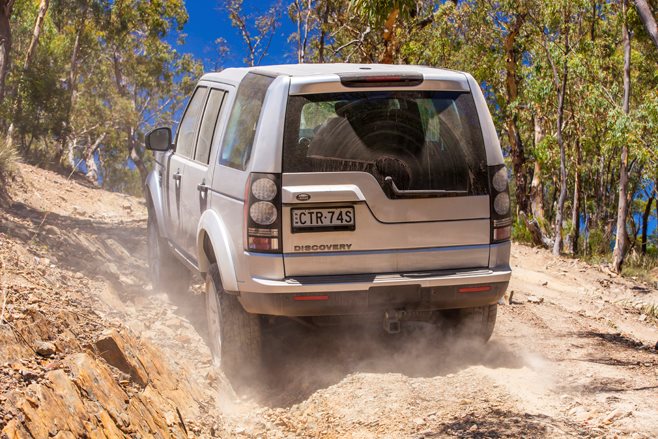 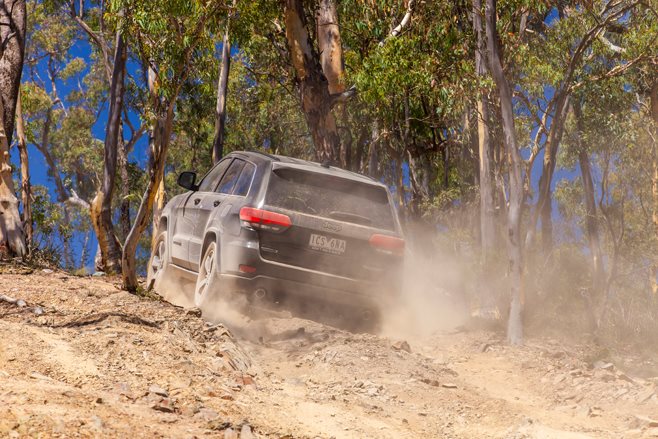