As the name suggests, value is a big part of what the Toyota Fortuner is all about.

You won’t quite save a fortune by buying a Fortuner, but you will save a worthwhile amount of money if you buy one instead of a Prado; previously the least expensive way to get into a Toyota 4x4 wagon with genuine off-road ability.

Before on-road costs, the Fortuner starts at $47,990. That’s exactly $5000 less than an entry-level Prado. For that money you get seven seats instead of the Prado GX’s five seats, a 500kg higher 3000kg towing capacity, and features not found in the base-model Prado, such as a rear diff lock and sidesteps. 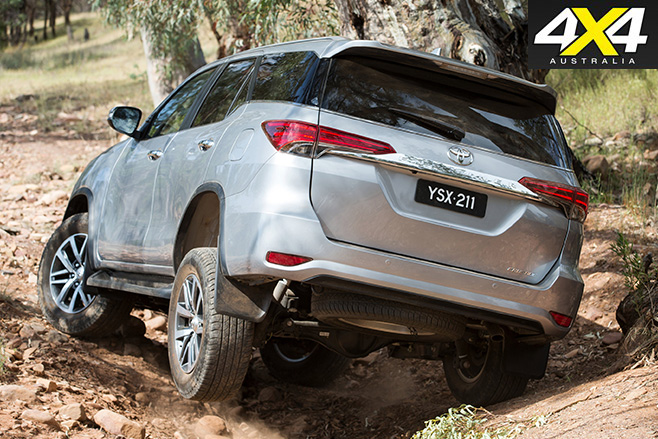 Even more money will be saved if you move up to a mid-spec Fortuner GXL instead of an equivalent-spec Prado – some $7000, in fact. And you still have the benefit of a rear locker and a towing capacity that’s 300kg higher (2800kg limit) than that of the Prado.

The Fortuner nameplate has been around overseas since 2005. However, the Fortuner you see here is all-new and is based on the just-arrived eighth-generation Hilux. 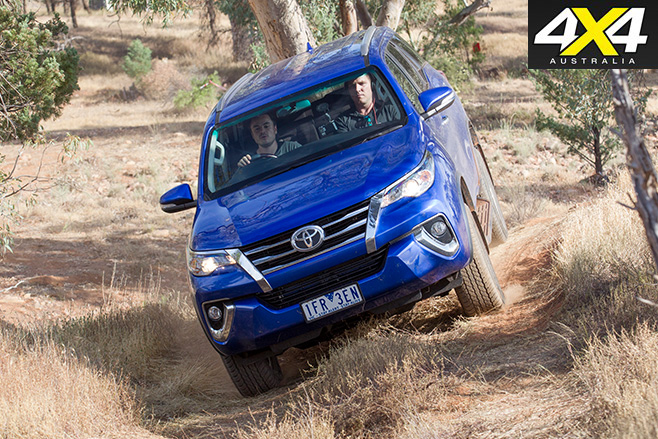 Aside from the body, just about everything else is shared with the Hilux, including the 2.8-litre diesel engine, the two gearboxes, the two-speed part-time transfer case, front and final drives, and the front of the chassis, including the double-wishbone suspension and rack-and-pinion steering. And there are shared body components, too, including doors, windows (including the windscreen) and the bonnet.

Like the all-new Hilux, much of the Fortuner’s testing and development was done in Australia and both share Australian-developed suspension and underbody protection, among other locally developed features. The Fortuner is claimed to be the largest-ever single-model development undertaken by Toyota in Australia.

The Fortuner comes with just one engine, Toyota’s new GD-1 2.8-litre diesel, where GD stands for ‘Global Diesel’. As well as being the core engine in the new Hilux, the GD-1 was recently transplanted into the Prado, albeit with a minor change. 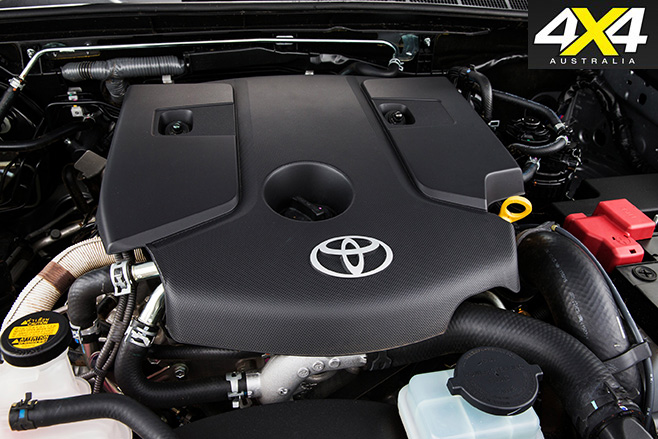 Despite being 227cc smaller and running a noticeably lower compression ratio (for improved refinement and less noise) than the 3.0-litre diesel it replaces in Toyota’s wider model range, the 2.8-litre produces significantly more torque and slightly more power – this is all testament to its much improved combustion efficiency.

On the road, 130kW doesn’t translate to scintillating pedal-to-the-metal performance, given the Fortuner weighs more than 2100kg, but the engine is nevertheless responsive, willing and almost effortless. Most noticeably, the 2.8-litre is much quieter, smoother and more refined than Toyota’s outgoing 3.0-litre diesel and it serves the Fortuner well. 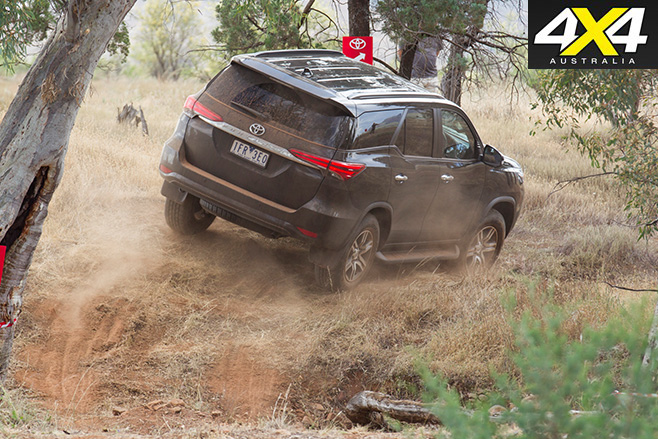 Nice refinement, too, from the six-speed auto, which has an additional overdrive ratio rather than the closer ratio spread of the five-speed it replaces in the Prado and Hilux. In the Fortuner, the six-speed auto comes with paddle shifters for mid GXL and top-spec Crusade models.

Despite the 30Nm less maximum torque when mated to the six-speed manual, the engine feels more energetic than when it’s paired with the automatic. The manual is available on all three Fortuner models, even the top-spec Crusade, and comes with an ‘intelligent’ mode in GXL and Crusade variants.

This six-speed manual is shared with the Hilux, but it’s different from the six-speed manual in the re-engined Prado. Like the new six-speed auto, the new manual has a wide-ratio spread with two overdrives, and it has similarly tall overall gearing in sixth (to the auto), thanks in part to a taller axle ratio.

In many ways the Fortuner rides and handles the way you would expect of a vehicle based on a ute, but the rear suspension is much softer and more compliant than that of an unladen Hilux, given that it doesn’t have to cope with a one-tonne payload. 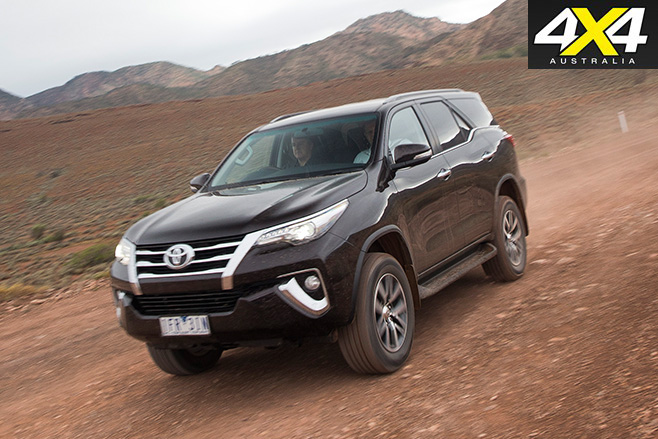 That’s not to say there’s anything wrong with the Fortuner’s ride and handling, but it certainly lacks the comfort and plushness of a Prado, but most things do. The upside is that the Fortuner has flatter handing than a Prado – at least, a Prado without KDSS – and has a sportier feel behind the wheel as a result.

The Fortuner’s steering calibration was done locally and is light at low speeds, but offers decent feel and feedback at higher road speeds. The Fortuner also does a good job of isolating road and suspension noise thanks to its body-on-chassis construction.

There’s no doubting the Fortuner’s off-road credentials. It shares many features with the Hilux, including the same clearance and underbody protection, and the same approach and departure angles. It does, however, have a better ramp-over angle and a smaller turning circle, thanks to the shorter wheelbase. 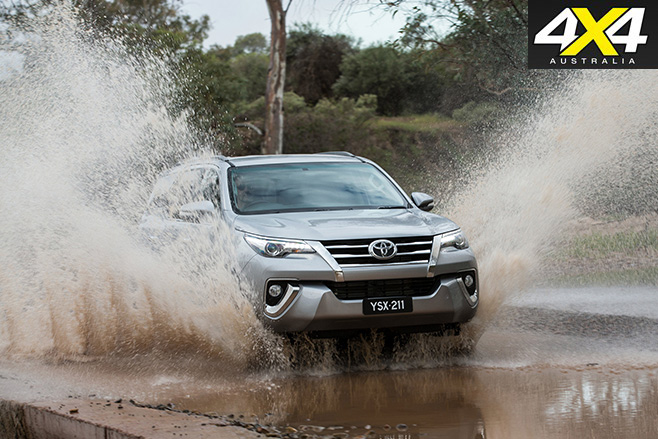 It also relies on the Hilux’s basic but robust part-time dual-range 4x4 system. Via the rotary-dial selector changes from 2-High to 4-High can be done easily on the move, although the shift into or out of low-range needs the vehicle to be stopped and in neutral, as you’d expect. At least the transfer case’s electromagnetic actuator appears to be balk-free, which is more than you can say of some similar arrangements where stick-shift transfer has been replaced by push-button or rotary-dial selectors.

At the rear, the Fortuner has 440mm of wheel travel, compared to the Hilux’s 520mm. The coil-sprung rear-end of a Prado GX and GXL has 465mm of travel, while the KDSS-equipped Prado VX and Kakadu have 565mm. All Fortuner models come with a driver-switched rear diff lock, which helps when you run out of rear-wheel travel, as well as off-road-tuned ‘A-TRC’ traction control. 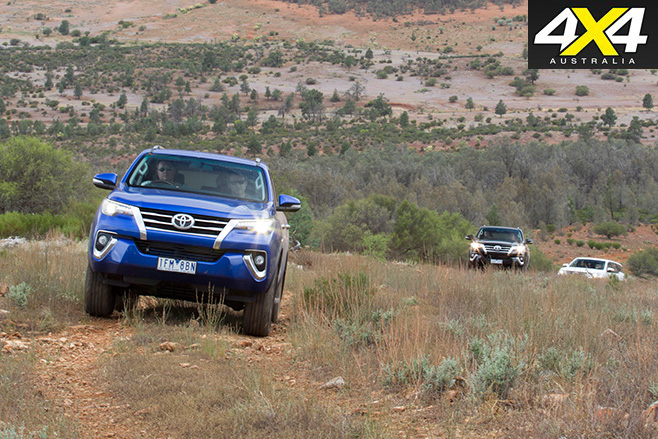 As expected of a Toyota 4x4, there’s solid recovery hooks, front and rear, the engine’s air intake is via the inner guard, and the wheel and tyre spec is off-road oriented. In fact, the Fortuner has identical wheel and tyre specs to those of the Hilux and Prado.

The Fortuner’s interior presentation is very passenger-car like, but the dashboard looks busy and, as ever with Toyota, some switches are placed too low and in odd places on the dash.

Better news comes in the form of tilt-and-reach steering-wheel adjustment and driver’s seat height adjustment on all models, so it’s easy to get comfortable. The legroom for second-row passengers is also surprisingly good, even if putting three adults across the back seat is a bit of a squeeze, in terms of width. 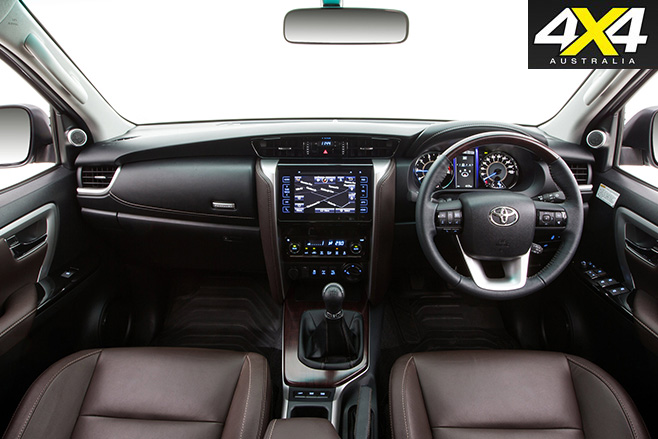 The third-row seats fold up against the side windows rather than folding down into a raised floor, as per the Prado 150. They can’t, however, be unclipped if you wish to remove them altogether. Typically there’s not much luggage space left once the third-row seating is deployed. 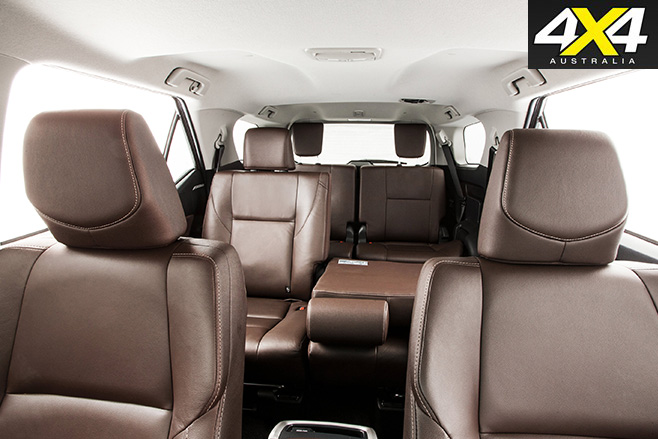 The Fortuner comes with a single, top-hinged rear door, while the full-size spare wheel is mounted under the body.

It’s hard to see the Fortuner not going well for Toyota. It’s built tough, drives well on road and has genuine off-road capability.

Most notably it brings Toyota toughness to a 4x4 family wagon at a more affordable price than the Prado. In addition, it generally offers more features at a lower price.

It’s not as refined or as comfortable as a Prado and it lacks the Prado’s very handy 150-litre fuel tank, but it will no doubt have many buyers thinking twice about what Toyota to buy. 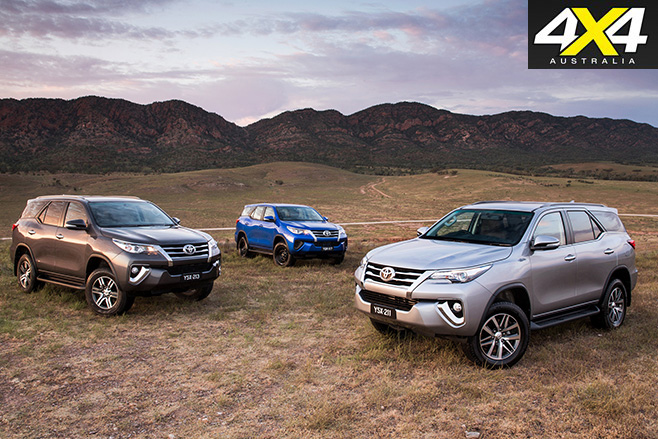 For the same price as the high-selling Prado GXL, for example, you can have yourself a top-spec, leather-and-all Fortuner Crusade.

The Fortuner will no doubt affect the sales of existing competitor vehicles including the Isuzu MU-X, Holden Colorado 7 and Mitsubishi’s soon-to-be updated Challenger.

It could also make life tougher for Ford’s just-released Everest. 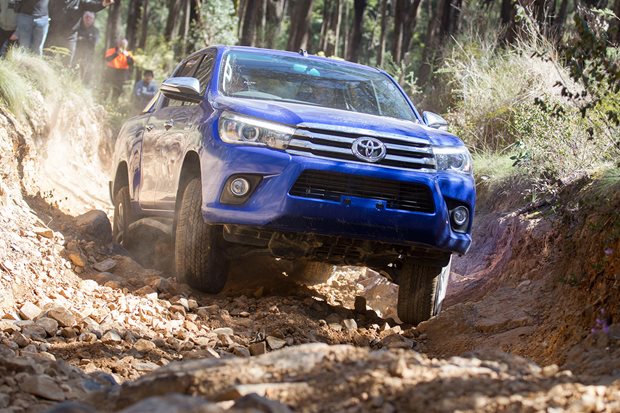 Road-test editor Fraser Stronach has had a closer look at the all-new Hilux. His verdict: it’s a ripper. 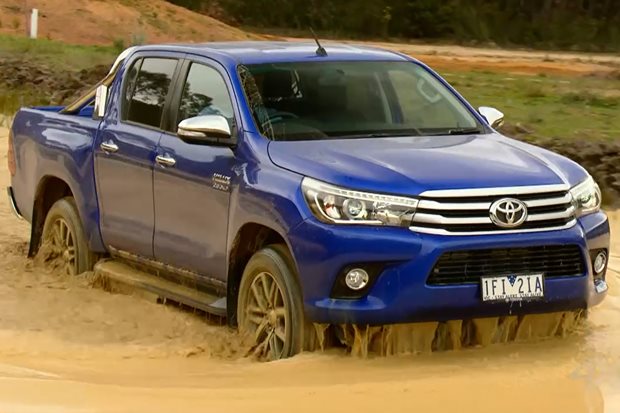 Toyota launched its all-new Hilux in Australia this week. Toby Hagon has been out driving it. See what his first impressions are... 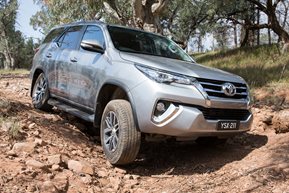