We’re driving west, breaking out of the confines, congestion and limitations of Melbourne’s roads and heading bush on what is an exciting day.

Why? We’re in Ford’s all-new Everest, the closest thing to a serious 4x4 wagon we’ve ever seen designed and developed in Australia, save for oddities like the Holden-based Overlander some 40 years back.

The Everest is based on the Ford Ranger ute, the design and development of which was also headquartered here in Australia, which further cements its home-grown stature.

The success (or otherwise – but we’ll bet on success) of the Everest will no doubt influence Ford’s global plans to maintain Australia as a research and development centre capable of developing new vehicles even after Ford ends its car-building in Australia in 2016. The R&D centre would employ about 1500 staff, mostly designers and design engineers, and could be Australia’s biggest single automotive industry employer – once Toyota and Holden end Australian production in 2017. So a successful Everest will help consolidate that future.

The Everest is one of two vehicles that will eventually replace the Falcon-based Ford Territory, which will disappear with the Ford Falcon when Ford’s local vehicle production stops. However, unlike the monocoque Territory, with its fully independent suspension and single-range traction-control-based AWD, the Everest is a 4x4 with a separate chassis, live rear axle and dual-range gearing.

Keeping the Everest honest here is the Toyota Prado with a new 2.8-litre diesel engine and six-speed automatic gearbox. It’s no secret that the Everest is aimed squarely at the Prado, the best-selling 4x4 wagon in Australia. So this really is the acid test. The Everest also lines up against the Holden Colorado 7, the Isuzu MU-X and the Mitsubishi Challenger – a new model is due in December – and, Toyota’s Hilux-based Fortuner 4x4 wagon when it arrives to liven up the party.

To quieten the Ranger’s somewhat gruff, commercially derived 3.2-litre five-cylinder diesel, and to make it cleaner so the Everest can meet Euro 6 emission standards, a more sophisticated, higher-pressure common-rail fuel system is used, as is AdBlue pollutant-reducing technology. As a result, the Everest’s maximum power is 143kW; 4kW less than the Ford Ranger’s maximum. Max torque remains at 470Nm, though. Those figures are still 13kW and 20Nm higher than the figures produced by the 2.8-litre diesel in the Prado, and this is evident on the road, thanks to the lower and tighter ratio spread of the Everest’s six-speed automatic transmission.

The Prado is notably lighter than the Everest, which helps with acceleration off the mark, but the Everest’s extra power and lower gearing more than compensate, providing performance that’s noticeably livelier, especially when maximum attack is called for – such as overtaking on a highway.

Ford’s efforts to quieten the 3.2 five-cylinder have, however, fallen short of the standard set by Toyota’s new 2.8 four. The 2.8-litre is more refined than the 3.0-litre it replaces (the engine that Ford no doubt benchmarked the Everest against). Compared to the Prado, the Everest’s engine fares the worst noise-wise under load at low-engine speeds, despite the Everest’s cabin having Ford’s Active Noise Cancellation.

Still, the Everest is generally quiet and smooth-running, and if it weren’t for the excellent refinement of the Prado’s new 2.8, the Everest’s low-rev noise wouldn’t even rate a mention.

Both these vehicles’ six-speed automatics are smooth and have smart shift protocols, but the Everest’s gearbox tune feels sportier than the touring-orientated Prado gearbox with its two overdrive ratios. Everest’s sixth is actually near identical to fifth in the Prado’s six-speed, which means the Prado’s sixth gear is extra tall, given the two vehicles have (as-good-as) identical axle ratios and tyre diameters.

Despite the shorter gearing and a higher official ADR fuel figure than the Prado (8.5L versus 8.0L/100km), the Everest manages to match the Prado for economy, with both averaging 10.4L/100km on this test.

Drive these two side-by-side on a twisting mountain road and you’ll very quickly learn that the Everest feels like a sports car compared to the Prado. Where the Prado is all body roll and understeer, the Everest has much flatter and more neutral handling. 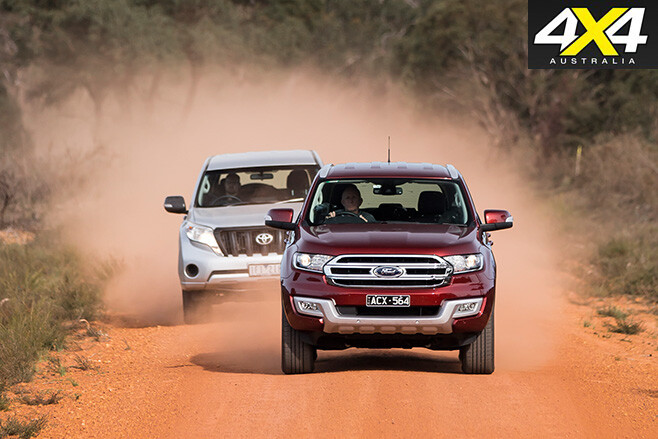 Like the Prado, the Everest uses a live rear axle with coils, but with a Watts linkage for sideways location of the axle instead of the simple Panhard rod of the Prado. The flipside of this is that the Prado’s softer longer-travel suspension and more supple ride means it’s nicer to drive once the roads straighten up, especially if the surface is broken and bumpy.

Like the Prado, the Everest has a full-time 4x4 system, which can be actuated via a dial in the centre console. The Everest’s system has an electronic-clutch centre diff that automatically diverts engine torque to the axle that can use it most – up to 100 per cent of the engine’s effort can be delivered to either axle. 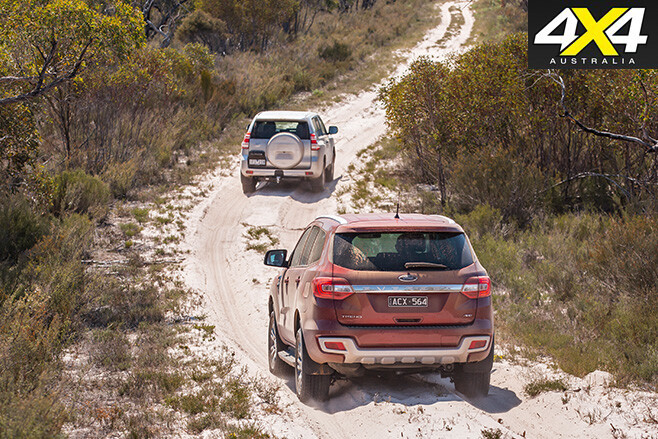 In the default Normal mode the drive is split 40/60 between the front and rear, or the driver can select three specific off-road settings: Snow/Mud/Grass; Sand; or Rock. And like Land Rover’s pioneering Terrain Response system, Ford’s Multi Terrain Selector (MTS) tweaks the vehicle’s driveline settings to enhance off-road performance. The Rock setting can only be used in low-range. MTS is standard across the Everest range, as is a driver-engaged rear diff lock.

The Everest generally matches the Prado in terms of ground clearance and approach, ramp-over and departure angles, but it can’t match the Prado’s long-travel suspension – even if the Everest’s rear locker (a feature on the Kakadu-spec Prado) compensates for its shorter suspension travel. 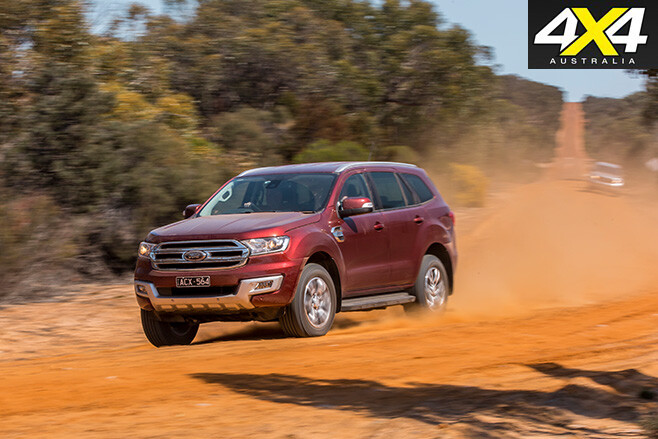 Interestingly, the Everest claims a deeper wading depth than that of the Prado (800 versus 700mm), even though it gets its engine air from under its bonnet lip rather than the inner mudguard. Both Ford and Toyota offer snorkels.

The Everest has a modern, well-appointed and nicely finished cabin. From a driver’s perspective, it feels more like a passenger wagon than a traditional 4x4, as you sit lower and farther back than in the Prado, which has a taller and more forward driving position. Still, the Everest is a comfortable place to be, even if there’s no reach (only tilt) adjustment for the steering wheel; something that is standard on the Prado across the range. 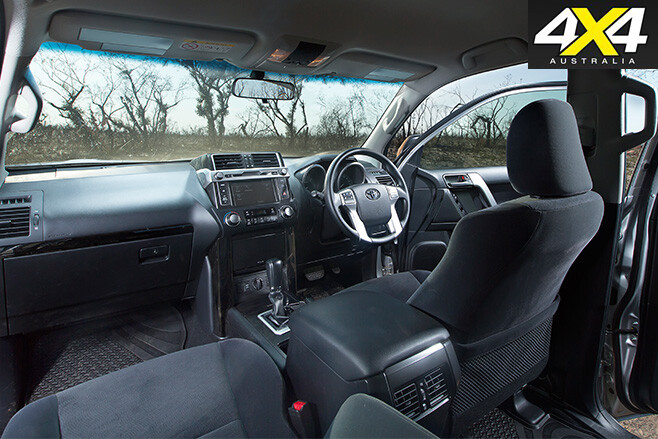 The Prado also has a slightly wider seat, which means the centre passenger is better catered for, and its third row suits bigger kids more than the Everest’s third row. The Everest does, however, have a longer load space and more luggage space behind the third-row seats when it’s in use.

A big win for the Prado is its 150-litre fuel capacity, which is nearly double the Everest’s 80-litre capacity – a major bonus for remote-area tourers. Countering that advantage is the Everest’s 3000kg max tow rating; 500kg higher than the Prado’s. The Everest also has a 200kg-higher GVM than the Prado, but the payload benefit is reduced by the Everest’s heavier weight. 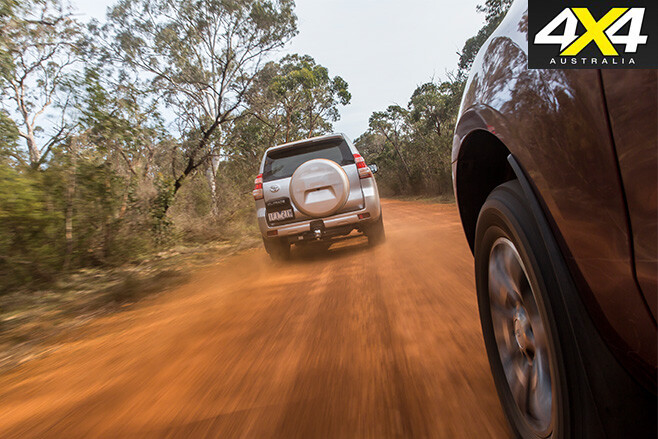 One thing Everest buyers will appreciate is that it runs on Prado tyre sizes, which should broaden the options of those looking for alternative off-road rubber for touring duty or replacement tyres in out of the way places.

Unlike the Prado, which comes with the choice of a manual gearbox (diesel), or with a petrol V6, the Everest is only available as a diesel auto. The Everest also only offers three spec levels, whereas the Prado has four. Regardless of this detail, one look at the Everest model range and price list shows a price/equipment strategy designed to attract potential Prado buyers.

The base model Everest Ambiente starts at $54,990, which is exactly the same price as the Prado GX five-seat auto. So for the same money, you get seven seats in the Everest, plus a rear diff lock, MTS, rear parking sensors and details including twice the number of 12-volt outlets.

At this level, the Prado can only counter with tilt-and-reach steering wheel adjustment, auto unlock (via a smart key) and pushbutton start; advantages the Prado holds right up to the top-spec models. Next up the Everest price list is the Trend at $60,990, which is exactly $1000 less than the price of the Prado GXL auto, but the Trend brings more features, including some safety technology only available in the $84,490 Kakadu-spec Prado.

The Everest’s value-for-money equipment levels across all grades, especially in the mid- and high-spec models, is its main advantage over the Prado. Backing that are the – arguably – more substantial benefits of stronger performance and sharper, sportier handing.

The Prado counters with powertrain refinement, ride comfort both on and off the road, better use of cabin space, and bush practicality – that 150-litre fuel range. Toyota’s service back-up and extensive touring-grade accessory availability are also advantages. Regardless of where your brand allegiance lies, Ford’s new Everest undeniably brings a serious challenge to Toyota’s enduringly popular Prado; something that the less sophisticated Holden Colorado 7, Isuzu MU-X and Mitsubishi Challenger have all failed to do.

Like these three, the Everest may be based on a ute, but it sure doesn’t feel like it.