As part of a 16,000km trek taking in the ancient Silk Route, three hybrid Range Rovers aim to drive from Nepal to India – without drowning

We drive the prototype hybrid Range Rover from Nepal to India as part of a formidible 16,000km pre-launch off-road engineering durability test

It’s a test that turns out to be a bit more severe than planned. The aim is simple enough, though. In order to prove that a Range Rover Hybrid will climb like a goat and wade like a hippo with all the luxuriant insouciance of your conventional Range Rover, we’ll venture into a rather picturesque river valley. 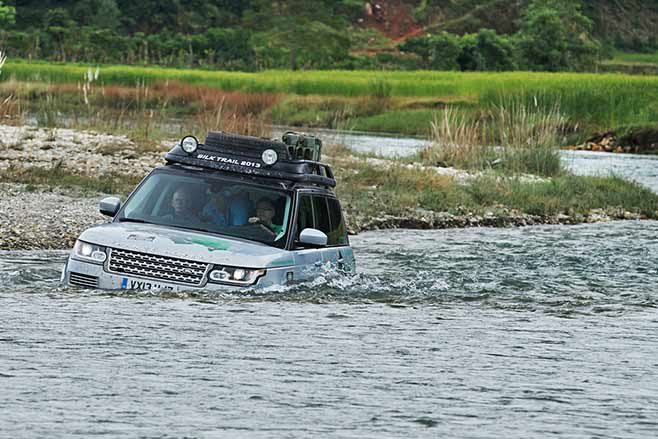 The valley in question is near Pokhara, in Nepal, and our mission is to dip the car deep enough to experience its wading capability. Right now, we’re easing along a track through some paddy fields, where a river crossing has been spotted. Modest bow waves are soon breaking from the Land Rover’s nose as it swooshes along the pebbled river bed, to the amusement of some locals. We’re in low range, the suspension is riding high and we’re having no trouble. Truth is that lots of Nepal’s battered pickup trucks can cross this without gurgling for air.

So our Land Rover personnel recce a stony spit of land splitting two tendrils of river and conclude that taking the Range Rover for a bath here might produce more dramatic images. A shallow-shelving section is selected for our departure – we line the car up, adjust our trajectory to satisfy the snappers on the other bank, then advance. Within seconds, the Range Rover’s nose is submerged as it plunges far deeper than planned and then we’re listing, the river washing over the bonnet on our nearside as we begin making heavy weather.

“Give it some welly,” comes the brisk command from LR’s David Sneath, and I do, feeling the wheels pawing for grip, the car jerking uncertainly as it battles for purchase on the slippery stones below. We sense the body levelling before the Range Rover’s nose rises slightly. We’re starting to climb to the other side and should be free in seconds. Only… we’re not. The car seems trapped by the river’s steep-sloping bed and the sheer volume of water around us. 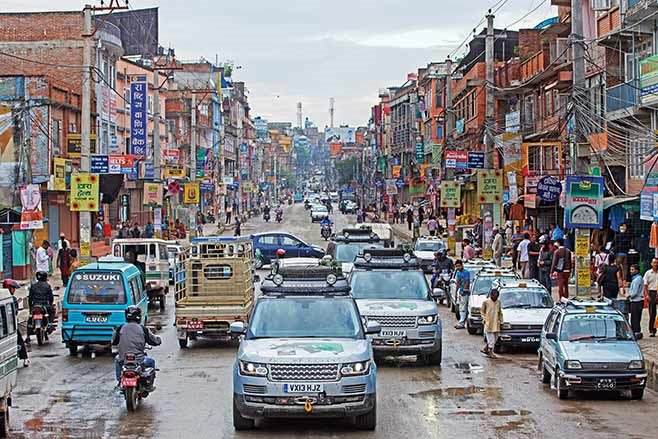 We’re in Nepal because this prototype Range Rover Hybrid and two others are passing through the country on their way to Mumbai in India. The starting point for this trip was Land Rover’s base at Solihull in the UK, 30 days earlier. The trio of cars and some Discovery support vehicles have already passed through Germany, Poland, Ukraine, Russia, Kazakhstan, Uzbekistan, Kyrgyzstan, China and Tibet before arriving in Nepal, where your reporter has joined to drive Range Rover Hybrid Prototype 1.

Why is Land Rover doing this? Partly to demonstrate that this part-electrified Range Rover is as tough as its conventional brethren, partly to prove that it has built the most capable hybrid on the planet and partly to perform the final validation test for this complex addition to its line-up. Which is why we’re driving prototypes rather than press cars – these engineering vehicles undertaking a final technology prove-out over 16,000km of the kind of territory that has made Land Rovers famous. 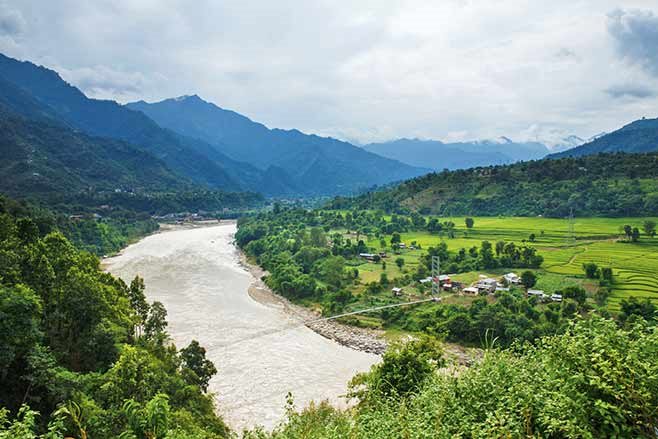 The reason for this particular route is that it partly traces the Silk Route, an ancient trail of interconnecting routes linking Asia to Europe. This network once extended across more than 6000km, got its name from the profitable Chinese silk trade and became a significant spur to the civilisation’s advance from 206 BC until the late 14th century.

We’re to join the journey in Kathmandu and the shadow of the Himalayas, heading west through Nepal to Delhi, India. It’s a distance of 1200km, and if that doesn’t sound like a lot, the conditions soon tell you otherwise. 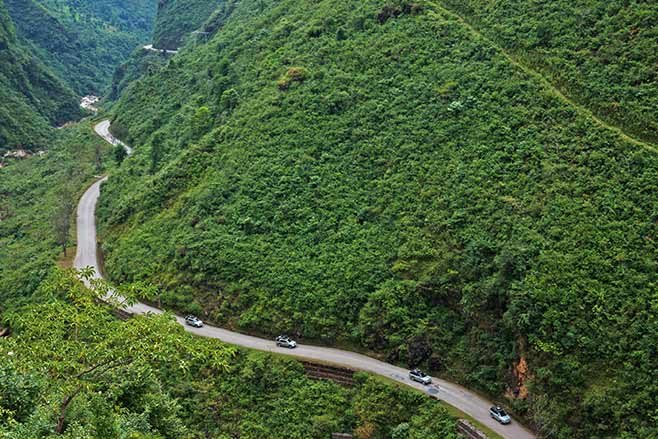 Range-Rover-Hybrid---India-to-Nepal-drive-arialBut before we begin, a bit about the car. Its hybrid drivetrain delivers 250kW from a TDV6 diesel engine and a 35kW electric motor, the pair producing a fat 700Nm torque peak from a helpfully low 1500rpm. That’s enough to deliver a 0-100km/h time of 6.9sec, top speed of 217km/h and, more impressively, 6.4l/100km combined fuel consumption and 169g/km of CO2.  This hybrid’s lithium-ion battery pack is quite modestly scaled, providing the Range Rover with only a mile (1.6km) of electric-only motoring, the aim being to deliver absolute efficiency by blending the motor and engine’s outputs rather than maximising the zero-emissions mode. 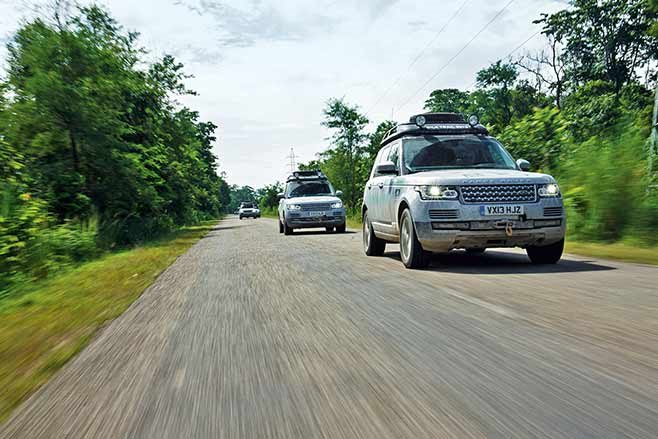 Of more interest right now than these raw stats, though, is that the liquid-cooled lithium-ion battery pack is encased in its own boron container below the floor. We haven’t got time to think about the electrical current coursing through this system at a nominal 288 volts, as the Range Rover sits mid-river, its wheels turning intermittently without getting us anywhere.

“Put it in reverse,” suggests Sneath, and we give up our recently won metre of advance as the hybrid backs up, only to halt again. I give it more throttle – all of it, in fact – and the car rocks and bucks as it battles for traction, reversing in short bursts until the rear gradually rises out of the water and we scramble onto the spit. And then the diesel engine dies, apparently exhausted from the effort. Opening the bonnet reveals the inevitable. Water has entered the high-mounted, funnel-like intakes beneath the bonnet’s edges (the Queen Marys, as they’re known) and, with the air intake plenums removed, it’s clear that the engine has ingested water. We have dipped this car too deep. 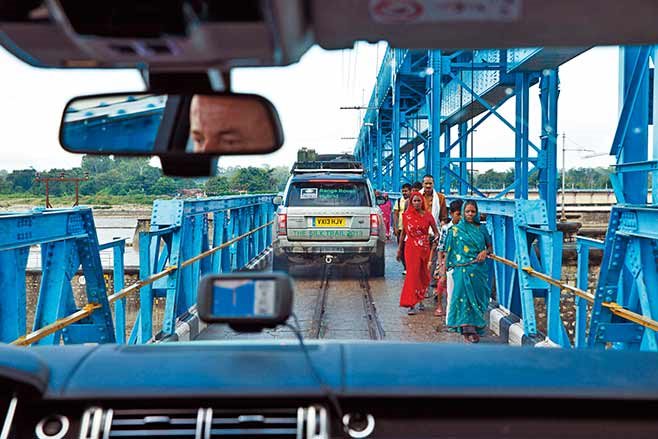 It’s towed back to the hotel, its vitals are dried (no water entered the cabin, incidentally) and, later that evening, it starts. Bar an odd tap from the engine, it seems okay. But overnight moisture penetrates further, and the following morning the hybrid stops after only a few kilometres. Laptop investigations reveal a malfunctioning ECU (Engine Control Unit), the removal of which reveals damp innards. This pre-production unit is deliberately missing its extra waterproofing sealant in case it has to be opened. It’s swapped for a spare and the Range Rover runs, although the engine’s metallic tap is a worry. So the plan is to limit it to 3000rpm and nurse the car.

Not that there’s much chance of using high revs when you’re fighting through Kathmandu. There’s a kind of order to the traffic. Most vehicles broadly aim to keep left, although this rule soon slips if there’s an obstruction, the goal being to overtake it regardless of other obstacles. These include random cows as the aimless quadrupeds often sitting in packs to form instant roundabouts. All of which makes your high-mounted seat, blind-spot monitors, fine forward visibility, crisp steering and decent grunt a fine armoury against attack. And, while the idea of giving the cows fresher air by running in EV mode might momentarily appeal, its deliberately dulled throttle response is not what you need to surge into a sudden gap. 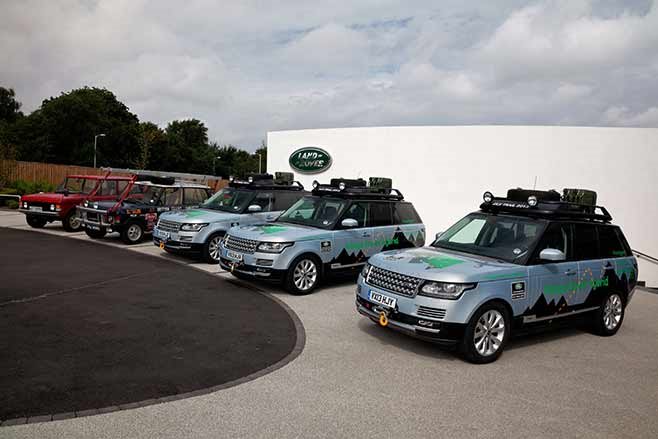 Eventually, we escape Kathmandu’s densely packed streets to marvel at the luminous green terracing of paddy fields cut neatly into the steep-sided hills. From urban jumble, we have broken into sub-tropical beauty, and a whole lot less traffic. A snaking road, too, although this Range Rover is carrying a roof rack, luggage, three occupants and a pair of winches, adding about 800kg to its already hefty 2394kg, so it’s not the deftest of beasts. You feel the extra heft as you tilt into a turn, but it reacts obediently, your confidence heightened by steering that swivels with an impressively clean, oiled consistency.

Such secure handling is a real asset, not only because the road weaves along the endlessly meandering contours of Nepal’s hills, but also because you need to dodge pedestrians, animals and the near-continuous stream of bellowing Tata trucks. ‘Slow drive, long life’ is popular, and totally ignored. 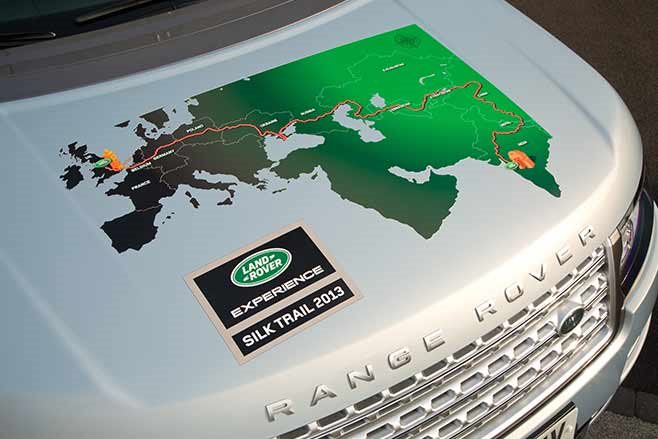 There are landslips, too. Nepal’s hills are steep and its rainfall is heavy enough to tear open the brilliant green slopes, spilling orange soil and rocks onto the roads below. So there’s plenty of opportunity to harness regenerative braking from a system that does a fine job of blending electric retardation with hydraulic, should you suddenly need to stop faster.

There’s plenty of that when we enter the unremittingly ugly town of Butwal for fuel, leaving us to wonder at the amazing contrast between the heavenly landscapes of Nepal’s hills and the dusty, chaotic and bustling ugliness of its towns. 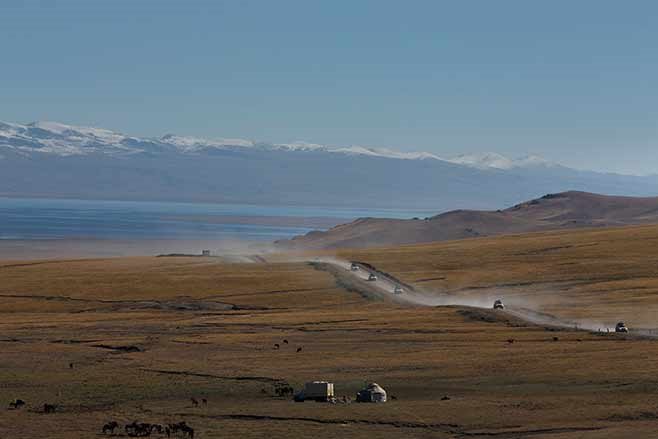 Nepalgunj, our stop for the night, is less hellish than Butwal but instead provides one of the most challenging traffic jams on earth. Random pedestrians, thrusting trucks, weaving rickshaws, veering taxis, cows, dogs, goats, motorbikes and bicycles fight it out on a road that barely leaves you time to be fascinated. Anything and everything mechanised hoots like it was on fire. This is a test for both driver and the drying Range Rover, its innards coping with stops, starts and sudden surges of gap-chasing power every few seconds.

We’re more confident in the recovering strength of our wheels, especially as the engine’s threateningly metallic tap has faded. Only a stripdown at Gaydon will reveal what that was but, for the moment, it seems to be functioning just fine. 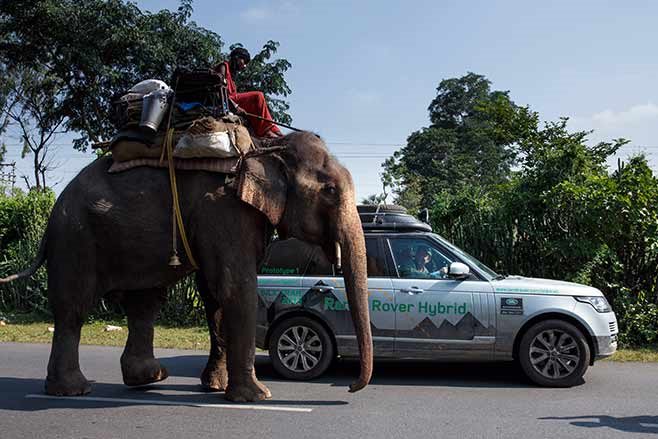 As we break out of Nepalgunj to enjoy more otherworldly countryside, we dare to use more power. The traffic evaporates and there’s a chance to notice more of Nepal. Such as the fact that almost every home is also a shop front, all of them selling packets of crisps strung up like washing.

Eventually the road levels, allowing us the chance to try the hybrid’s Sport mode, whose torrent of syrupy power makes overtaking brief and reassuringly complete. In Sport, the system maximises the battery’s charge, the electric motor ready to fire instant boosts of torque. It’s highly effective, making this Range Rover feel rapid, despite its load and, as a bonus, the torque also heightens its abilities off road. 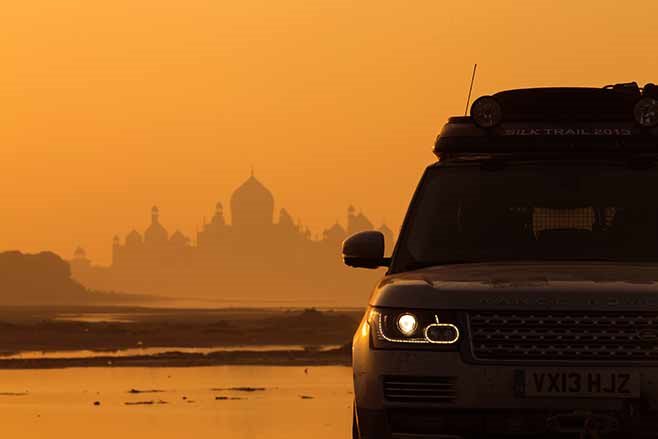 By now, hybrid engineer Steve Liggins is happy to allow full use of the power, the car seemingly recovered from its immersion. This turns out to have yielded a genuinely useful validation test, says Land Rover’s Paul Bostock, in that the hybrid system is supposed to shut down when the car is half sunk. And that’s exactly what it did, further confirming the robustness of this highly complex hybrid Range Rover.

It also turns in some promising fuel consumption numbers. On our final, hard-fought 340km leg into Delhi, Prototype 1 achieves 8.9l/100km at an average of 35km/h, its stop-start system stilling the engine for 19 per cent of the journey. Another car manages 7.9l/100km, suggesting that 7.0l/100km might be achievable in saner conditions than we have endured. Conditions that have resoundingly underlined what a five-star experience this Range Rover is, even when all around is bedlam. And that includes wet bedlam.