THE IVECO Daily 4x4 and I are pretty well-acquainted.

I’ve done more than a few kays in the previous generation and found it to be a pretty capable mudslinger, albeit one that is less at home on the road than other 4x4 light trucks out there – this truck has a definite off-road bias. There was, however, a cheap feel to the interior, as well as a few rattles and squeaks.

An update last year saw the arrival of a new Euro 6 3.0-litre powerplant, a new cab and fresh interior. The previous generation used EGR alone to battle diesel emissions; this new version uses both SCR (it takes Adblue) and EGR. I’m not a fan of EGR at the best of times, much preferring the mechanical simplicity of SCR. 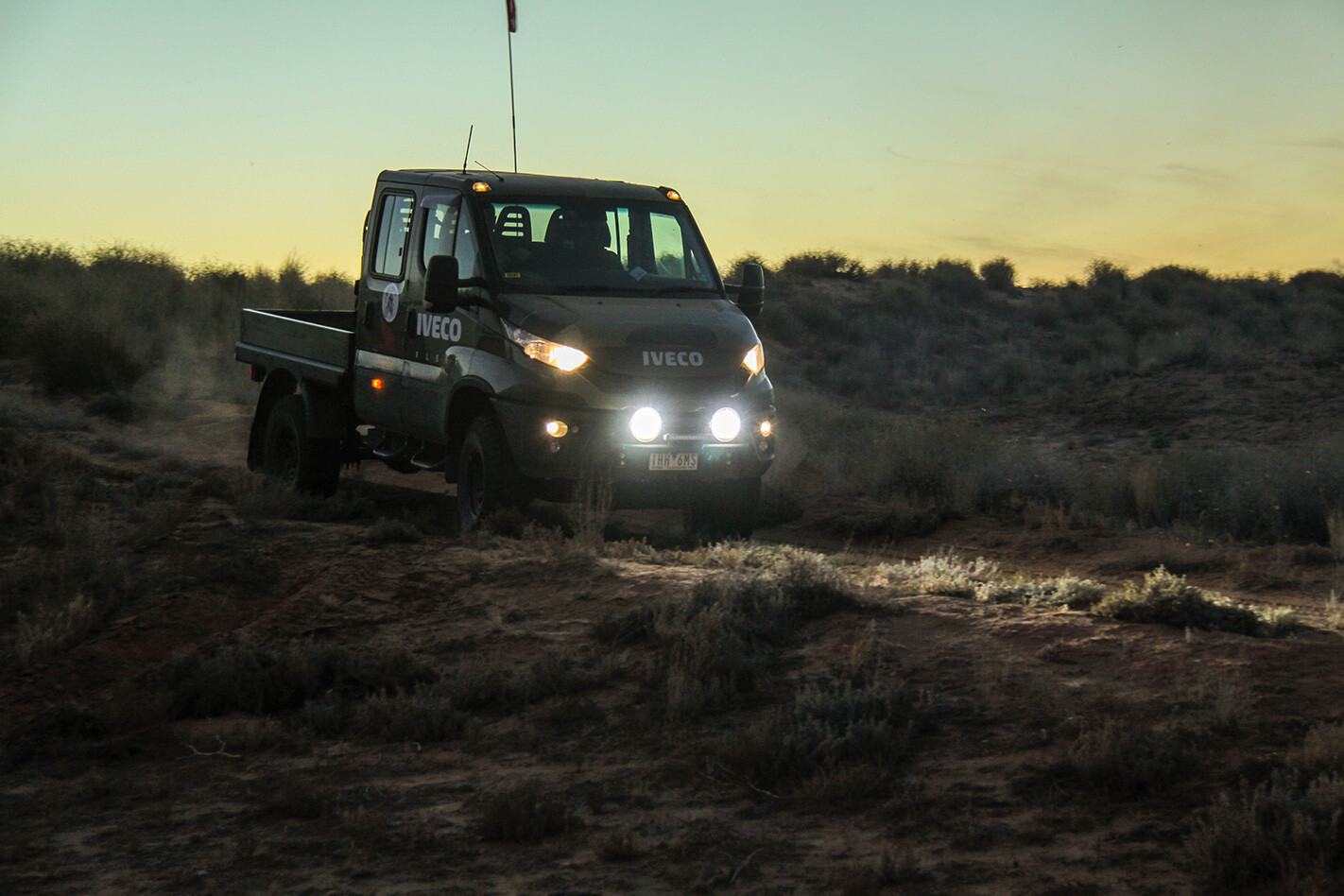 However, in Euro 6 guise, the SCR system does the bulk of the heavy lifting, leaving the EGR system with a much reduced flow rate. We recently tagged along with one of Daryl Beattie’s Adventure Tours across the Simpson Desert.

My main job on this trip was to steer the big Eurocargo 4x4 that serves as a mothership for the guided dirt bike tour; while everybody else was doing their best to break their bones on bikes, I was wrestling with 13,500kg of off-road truck.

After three days at the wheel of the Eurocargo, and for something different, I managed to snaffle the keys to the little Daily and pointed it east towards Big Red. After the truck, the Daily 4x4 felt like a sports car. Admittedly the Daily didn’t really have any load on board, but this was the first time I’d had a chance to drive the updated 4x4 in an off-road setting.

The restyle of the Daily has made a huge difference inside and out. The interior plastics, while still hard and commercial, have much more of a quality feel. Outside, the IVECO has lost the wonky bug-eyed look of the previous model. As you’d expect of a truck, the Daily features old-school live axles front and rear and sits on parabolic leaf springs all ’round, making it extremely capable off-road – it flew up the dunes. Light tare weight and a decent set of 37-inch mud terrain tyres combined with low tyre pressures really made it feel at home in the desert.

She’s pretty rough on-road without a load on the back, though. The Daily has high, intermediate and low range, but in this terrain there was rarely any need for anything other than high range with the centre diff locked. It uses a 3.0-litre turbo-diesel engine and makes 170hp (125kW) and 400Nm.

The updated powerplant has a habit of being a little laggy even though peak torque is from 1250rpm, but keep the tacho needle at around 3000rpm (peak power) and the turbo spinning and it will have a fair old crack at most things. For the most part the IVECO engine is pretty unstressed, but the biggest advantage of the Daily is that it has a gear for all occasions.

In the desert, though, the Daily provided a relaxed drive. A couple of times I grabbed the rear diff lock to make cresting some of the dunes a little more dignified; otherwise it was a walk in the park. After running amok in the desert sand and clay pans for a few hours, I crested a dune to find Big Red awaiting me. 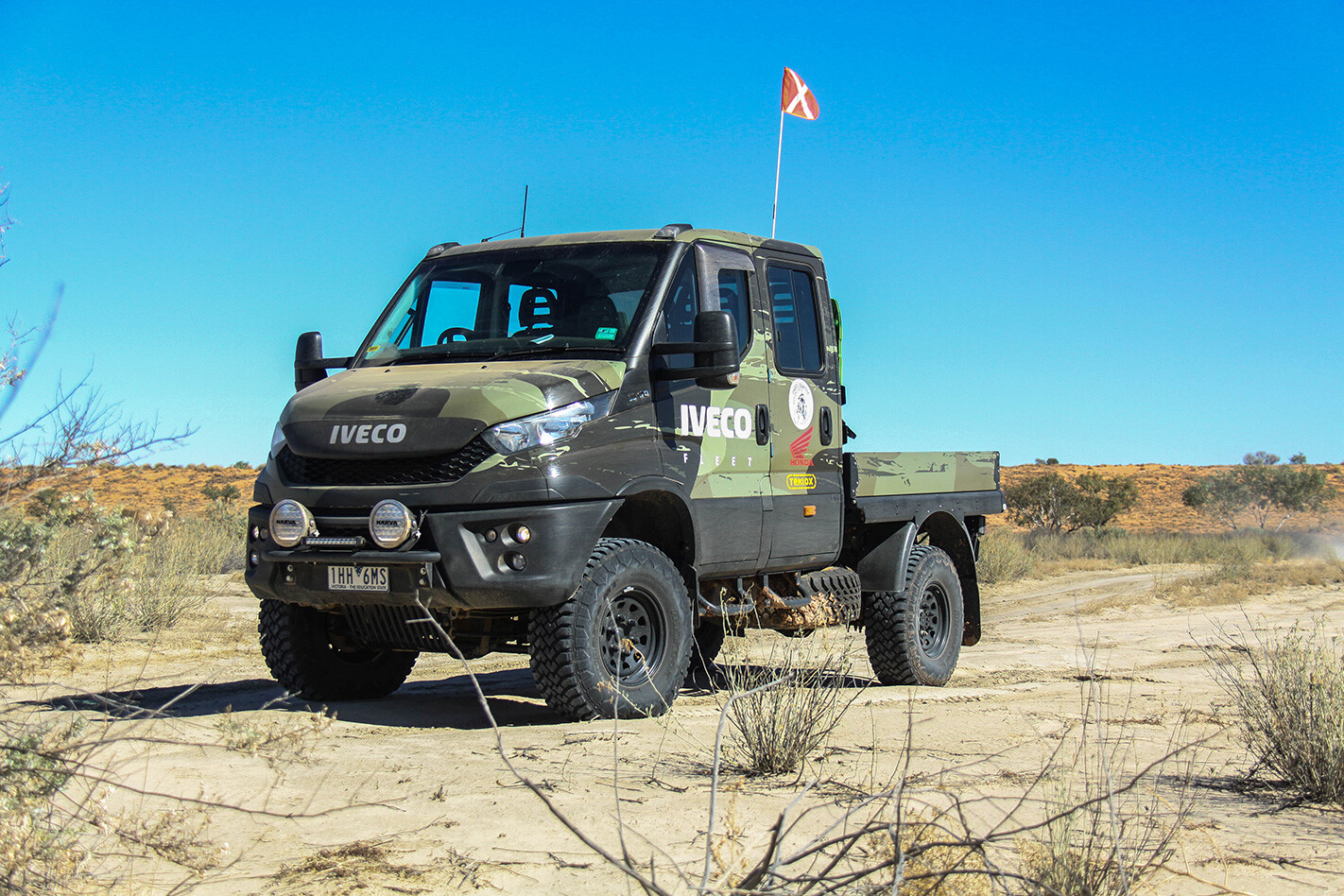 I nailed the go-pedal under the gaze of the waiting bikers on top of the famous dune and, to my embarrassment, I didn’t make it to the top first go. I could see the nervous look on the face of IVECO’s Joel Reid as he watched me make another attempt.

If I hadn’t managed to get this tough off-roader to the top they may still be searching for my body. It came down to speed and tyre pressures, and the Daily scrabbled to the top of the dune. The close-gated gear shift in the Daily made it very easy to slip into the wrong gear when trying to grab a cog in a hurry.

The Unidan-bodied Eurocargo 4x4 makes an imposing sight sitting on its military-spec Michelins. Daryl’s first truck was an ex-ADF Unimog, but even after a few modifications the Benz proved troublesome in terms of reliability and maintenance.

The Eurocargo may not have the portal axles of a ’Mog, but in the desert it handled the dunes well. Running down Binns Track from Ooraminna Station to Mt Dare saw the big truck easily sit on the speed limiter for much of the trip. Bulldust holes may swallow the average fourby, but the Eurocargo just ploughed on through. The Tector engine has a nice, low, flat torque curve, which has peak torque on tap from just 1200rpm. Ultimately that results in less gear grabbing and an easier job in the dunes. Dune descents in the Simpson were a bit more of a challenge as the stair-cased ruts left by previous vehicles made the truck rock violently.

Slow and steady was the order of the day to keep the Eurocargo upright. This truck is also equipped with an Air-CTI central tyre inflation system as well as a massive set of King shocks. Both these features were standouts, the shocks especially.

With 1400L of water, 600L of diesel and 500L of petrol, as well as luggage, camp gear, a kitchen, fridges, freezers, spares, a workshop and a spare Honda CRF450 on board, the IVECO’s suspension copped a fair old pounding. The shocks did their job and stood up to the task admirably, though.

For those who like a squirt in the dirt on two wheels, Daryl Beattie Adventure Tours offer trips along some of Australia’s most iconic off-road routes. These tours are fully catered and supported. A fleet of Honda CRF450s provide transport with Daryl in the lead on his Africa Twin. 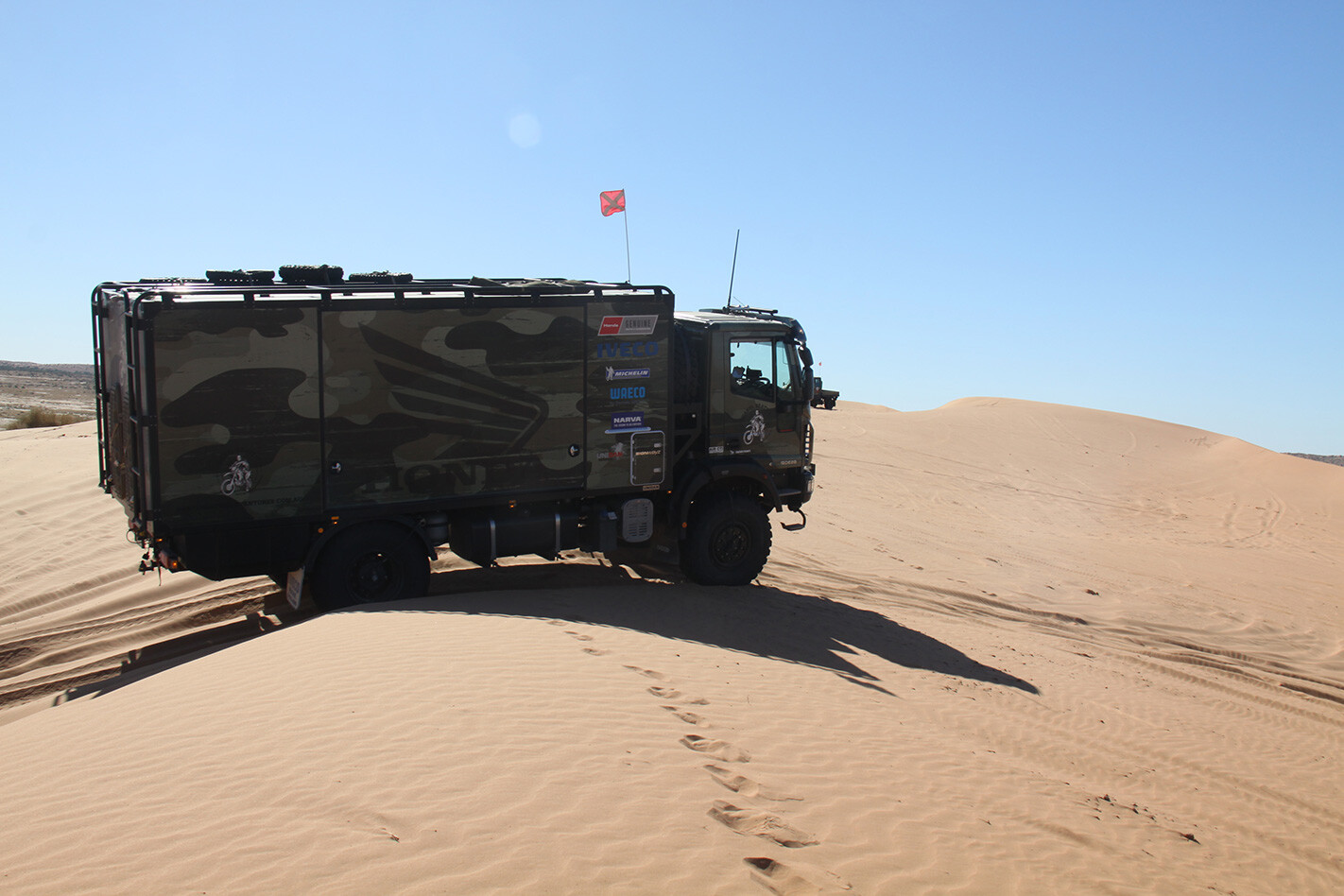 I’ve got to say that the food was exceptional as well. It may have been the setting, but I still reckon that chowing down on one of the best steaks I’ve eaten, beside a fire under an outback starshow with dingoes howling over the dunes, was a highlight of the trip. DBA offer tours of the Simpson, Cape York and the Canning Stock Route. There’s also a Simpson Tour on offer that starts from the Finke Desert Race.