Introduced in late 2015, the Renegade is Jeep’s new baby wagon. Jeep fans may not like the fact that the Renegade, a name steeped in Jeep history, is now a passenger-car based SUV, but that’s the price to be paid for being alive.

The Renegade is more Fiat than Jeep, and if it wasn’t for Fiat helping to bail out Chrysler (Jeep’s owners) from bankruptcy in 2011, Jeep mightn’t even be around any more.

In Australia the Renegade comes in five models, but only one – the ‘Trailhawk’ you see here – has four-wheel drive, which at least is the basis of a claim to being a Jeep. That claim is further strengthened by the fact the Trailhawk is powered by the only US-sourced (Chrysler) engine among a wide range of Fiat engines used across the rest of the range globally. 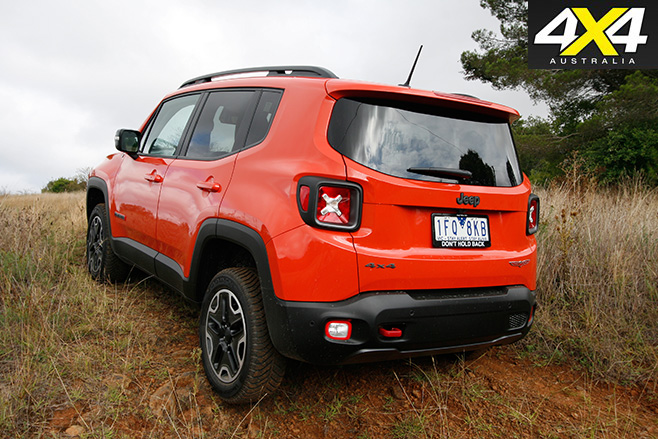 Thankfully, the Jeep ‘influence’ in the Trailhawk also runs to an additional 20mm of ground clearance (up to 220mm) over the other Renegade models, different front and rear panels for steeper approach and departure angles, substantial underbody protection, a full-size rather than a space-saver spare, and all-terrain tyres.

POWERTRAIN AND PERFORMANCE
The Trailhawk’s Chrysler-family engine is a single-cam 16-valve 2.4-litre petrol four that claims 137kW, a decent amount of power given the Trailhawk’s reasonably trim 1550kg.

However, the engine needs plenty of revs to give its best. In fact, a heady 6400rpm is required to produce all 137kW. While the maximum torque, a modest 236kW, doesn’t clock on until 4400rpm. 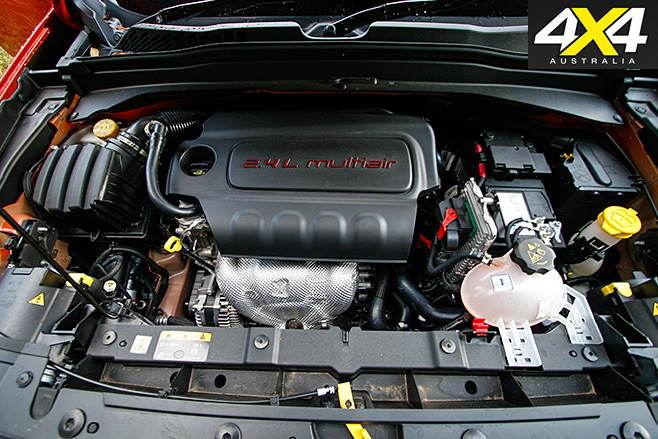 If this sounds like a major shortcoming, don’t fear too much. The engine has a willing ally in the nine-speed ZF ’box. Having so many speeds allows close ratio gaps, which is what you want for a peaky engine.

On the road you have to keep the engine busy if you what good progress, but its balance shafts help to ensure it feels reasonably smooth and refined – even if it’s a bit noisy.

ON-ROAD RIDE AND HANDLING
The Trailhawk’s lightweight, fully independent suspension and nice balance makes for a sporty on-road drive. This is helped by a compliant ride over lumpy bitumen and unsealed roads. Not so good is the generally high level of road noise.

OFF-ROAD
The Trailhawk’s 4x4 system is called ‘Active Drive Low’, despite not having low-range. It even has a ‘4WD Low’ switch; although, the main thing this seems to do is cancel the ESC, which is what happens when you engage low-range on a dual-range 4x4. At least the single-range system has a respectable 20.4:1 crawl ratio.

Special programs for Auto, Sport, Snow, Sand, Mud and Rock tweak the throttle mapping, gearbox shift protocols and the like, while the off-road settings automatically lock the centre electronic ‘diff’, which can be locked separately via the ‘4WD Lock’ switch. 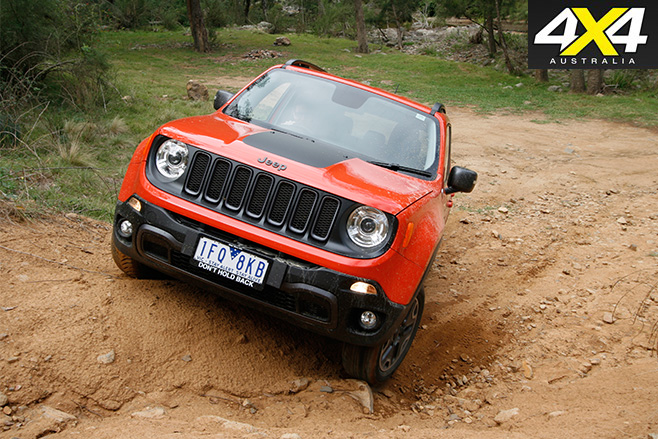 In what is a silly arrangement, if you try to select the ‘Rock’ program you are prompted to first engage ‘4WD Low’, as per the usual protocol with a dual-range 4x4. Who are they trying to kid?

Once you get past all this carry-on, the Trailhawk rewards with its decent ground clearance and steepish approach, ramp-over and departure angles. Thanks to the clever design of the rear wishbones there’s even a surprising amount of rear-wheel travel.

Not so good is the electronic traction control system that isn’t as effective as you’d expect, especially given the very effective ETC on the Cherokee Trailhawk – which also uses a fully independent (but larger) Fiat platform. 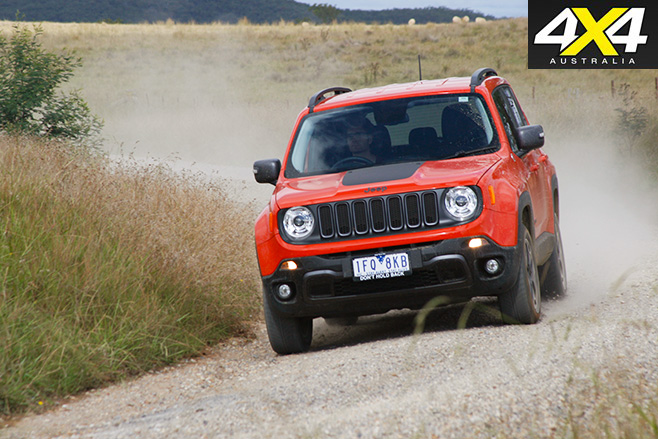 Regardless of the off-road effectiveness of the Renegade Trailhawk, it is very well protected underneath – much more so than your typical compact SUV. You might not get all that far, but at least you shouldn’t do any damage in the process. However, Jeep claims a modest 480mm wading depth due to the low-mounted air intake, so water crossings need care.

The full-size spare is also a practicality bonus, as are the reasonably aggressive all-terrain tyres – even if they look a little low in the sidewall. With the guard clearance it looks like you could fit something taller.

CABIN, ACCOMMODATION AND SAFETY
The Trailhawk is smaller inside than something like a Subaru Forester, with a narrow, short-but-tall cabin that’s nicely detailed and finished. It feels quite luxurious with leather and all.

It’s also surprisingly accommodating for its size given a tall adult can still sit behind a tall driver, even if it’s a squeeze. The driving position is comfortable and has lots of adjustment, but the wide A-pillars are annoying, vision-wise. 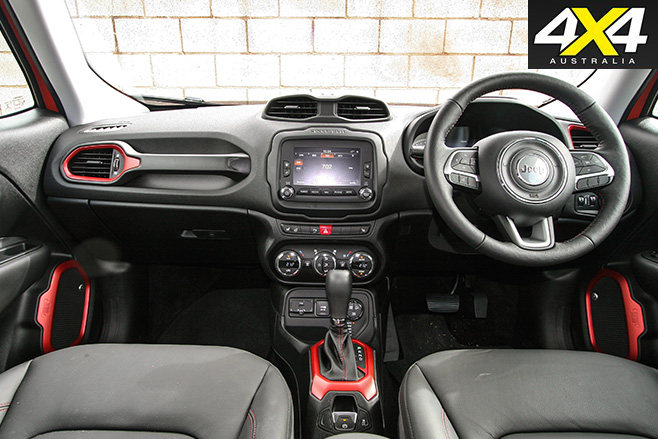 The second-row seats benefit from deep cushions, but aren’t wide enough for three adults. While the modest cargo area has a high floor due to the full-size spare.

The Trailhawk has plenty of safety kit among a long list of standard equipment, but it hasn’t been ANCAP rated as yet.

SUM UP
The Trailhawk is a fun and reasonably effective light-duty 4x4, but it feels expensive at $40K – even given its generous equipment.

It’s a shame it doesn’t come with one of the diesel engines fitted to Renegade models overseas, but that’s very much Jeep’s way when it comes to off-road specific variants in other model ranges. 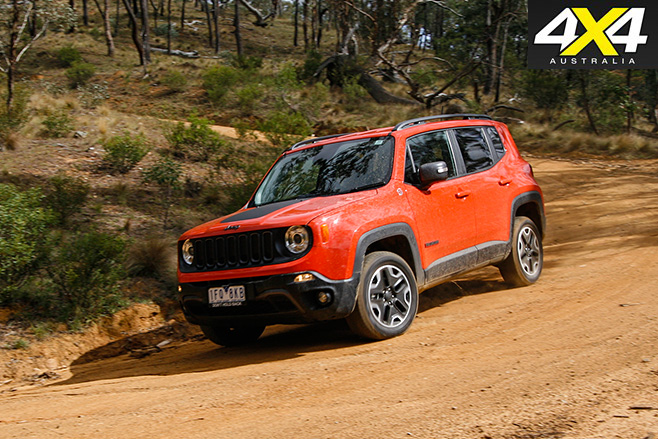 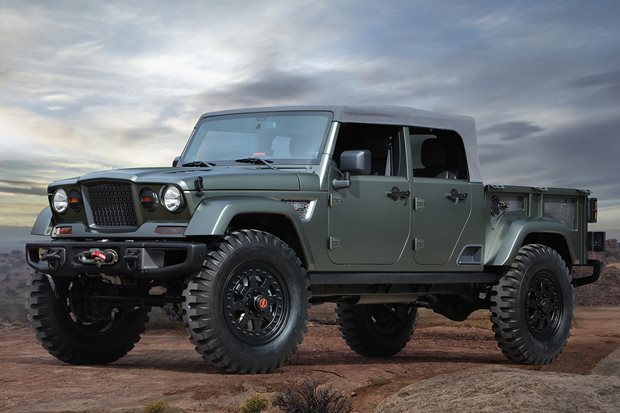 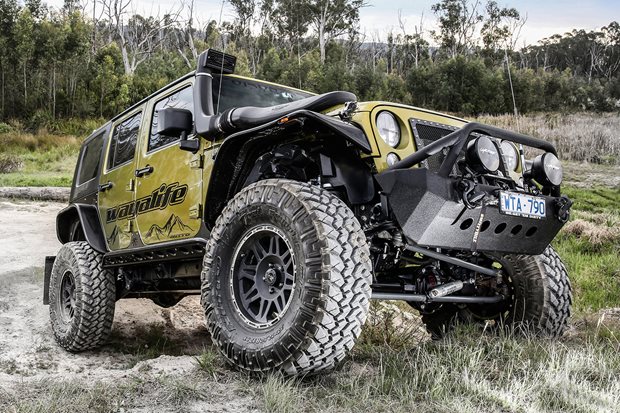 When you’re called ‘Speedie’, a V6 Jeep Wrangler doesn’t live up to your name. A supercharger and other mods soon fix that. 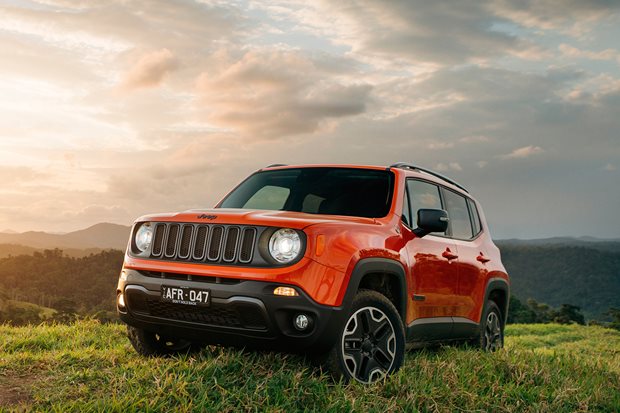 Jeep has served up another city soft-roader, with a Trailhawk ‘off-road’ version available for the self-delusional, Wheels Magazine reports.