THE LX 570 is based on Toyota’s 200-series Land Cruiser, utilising the same chassis and most of the body.

However, because it’s predominantly aimed at Middle Eastern and American markets, it comes fitted with a 5.7-litre V8 engine. Lexus seriously looked at bringing a diesel version to Australia, but it couldn’t make the numbers add up. The owner’s manual even gives a tantalising taste of how close it got, with the brochure containing details for the LX 570 and the LX 450d name. And since late 2015, Lexus has sold a Lexus LX diesel in Russia.

Still, for those not as concerned about the method of propulsion, the LX 570 essentially sits at the top of the Land Cruiser range. It creates a natural walk-up for those who are not satisfied with the near-$120K you’re shelling out for a diesel Sahara.

At $140,500 the Lexus is a decent step up, bringing with it unique front styling and a unique bonnet, as well as 20-inch wheels or optional 21s, as fitted to our car. The tail, too, has also been snazzed up, with different tail-lights, among other tweaks. 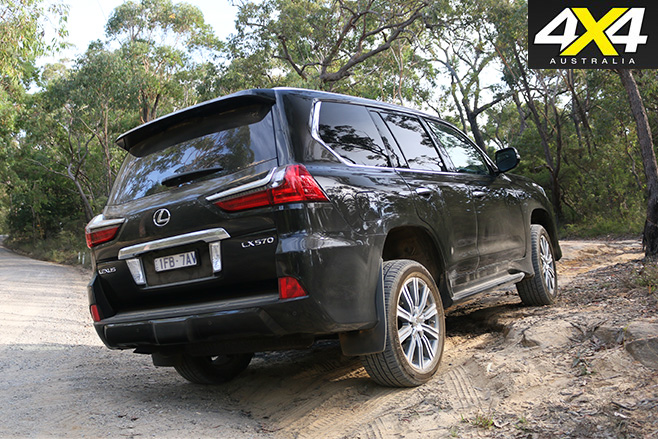 Plus it gets plenty of fruit – things like the beefy Mark Levinson sound system simply aren’t available in the Land Cruiser.

Lexus would rather the LX is considered a genuine Range Rover competitor – complete with eight seats – rather than a better Land Cruiser.

PRACTICALITY
THE LX 570 has a big cabin with plenty of width, something that allows three child seats across the middle (they can’t be used in the third row because there are no anchor points).

And if you’re confining it to a five-seater, you’ll comfortably fit five adults in along with plenty of luggage (although the third row seats fold electronically against the side of the car, taking up some of that space).

There’s a unique dash layout with loads of leather and wood. Combined with the huge 12.3-inch colour screen, it makes for an inviting and space, with a deep centre console (it doubles as a fridge) and plenty of binnacles for odds and ends.

Less impressive is the Lexus Remote Touch controller, which is part mouse, part joystick – and pure frustration in the way you have to carefully modulate exactly where you place it, or else you’ll zip past the virtual point on the screen you’re aiming at.

Those into their sound systems will like the Mark Levinson sound system, which is lacking nothing in volume and punch.

In true Lexus style, the attention to detail is impeccable. It’s a beautifully put-together machine, and one that is suitably luxurious on a long drive.

ON THE ROAD
THE LX is a big, heavy car, which takes its toll on manoeuvrability in the suburbs. While bodyroll is generally well contained, there’s still some leaning when you push on. But the 21-inch tyres provide better grip than the lower profile tyres on a Land Cruiser; there’s also a slight improvement to steering accuracy. 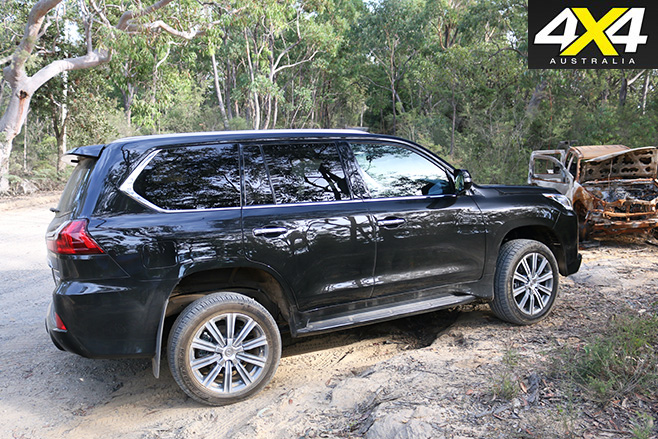 The 5.7-litre V8 is smooth and strong, ensuring good performance. It’s the best part of 2.7 tonnes, so you’ll sometimes need every kilowatt and newton metre to get the job done, especially if you’re going to utilise the 3500kg tow capacity. But it works well with the eight-speed auto to make decent progress.

Thirsty, though, and you can use close to 20L/100km around town. However, on our mixed on- and off-road route, it used a bit over 16L/100km. Keep in mind, though, it calls for premium unleaded. Thankfully there’s a 138-litre fuel tank, ensuring a typical range of about 700km before you spend up big on a refuel.

One area the LX really impresses is quietness and refinement. It’s super relaxed and well-shielded from outside noises, making for a fantastic long-distance tourer.

OFF-ROAD
THE price, luxury appointments and petrol engine will likely ensure most LXs stay snugly confined to bitumen; which is a shame, because it’s a hugely capable machine.

The V8 engine has no problems overcoming the bulk of the body and makes light work of sand and steep inclines, although you’ll often find the engine revving higher than a diesel would. Thankfully, there’s downhill assist, which utilises the ABS functionality to reduce speed – as engine braking isn’t great.

Indeed, most of the Land Cruiser’s off-road artillery is there, including Crawl Control (off-road cruise control for maintaining a slow speed) and Turn Assist, for temporarily locking the inside wheel to tighten a turn. Each is noisy once operating, with plenty of grinding and graunching to accompany the good work being done.

Underneath, too, there’s solid protection, as well as a full-size spare.

Yet the tyres aren’t very well-suited to the off-road task. Both the 20- and 21-inch tyres come with a fairly low 50-profile design. While we haven’t tested them to the extreme, we’re prepared to bet they’re more susceptible to sidewall damage. Plus there’s less benefit to deflating them for sand driving, because the sidewalls won’t bag out as much. 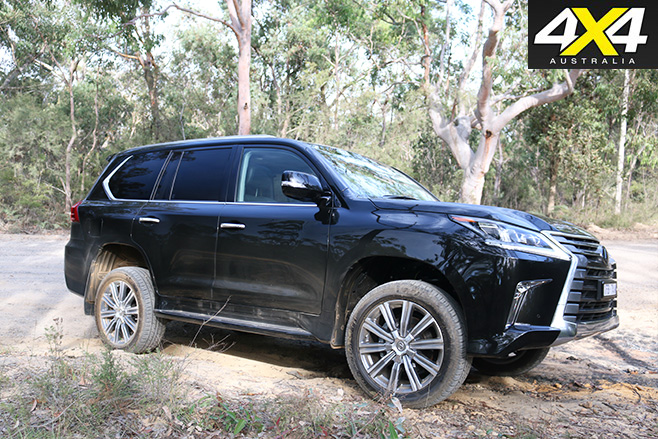 At its regular height the approach and departure angles are nothing special. Up front, a Land Cruiser has a 32-degree approach, whereas the LX 570 makes do with 25 degrees. At the rear it’s 24 degrees versus 20 degrees.

However, that air suspension allows the ride height to be raised from its regular clearance of 225mm; the front can be raised up to 70mm and the rear up to 80mm. That in turn improves those approach and departure angles, which are close to the Land Cruiser’s.

There is genuine ability elsewhere, too. Great wheel articulation, for example, makes it easy to roll over jagged surfaces. However, the KDSS suspension of the Land Cruiser is missing, meaning the stabiliser bars are constantly part of the deal; whereas in the Land Cruiser they effectively disconnect temporarily to maximise travel.

The LX also gets the Land Cruiser Sahara’s four cameras as part of the multi-terrain monitor. It gives a good virtual overhead view as well as a view out the front and down each side.

VERDICT
THERE’S plenty to like with the LX 570, including most of its Land Cruiser pedigree. But it’s not the type of car most people will head to the scrub in, partly because of the price, but also because it’s ultimately not quite as capable as a Land Cruiser.

But it makes up for it with on-road refinement and poise and loads of gear, in what is a beautifully put-together machine. If you didn’t have to worry about fuel prices, there would be much worse ways to travel. 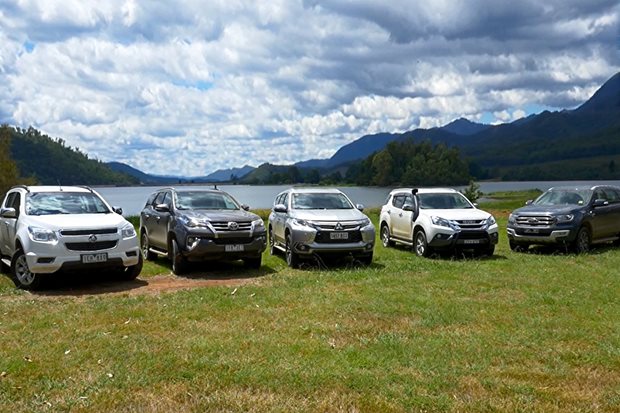 Our recently crowned 4x4 Of The Year, the Ford Everest, takes on its class rivals in this family wagon shootout. 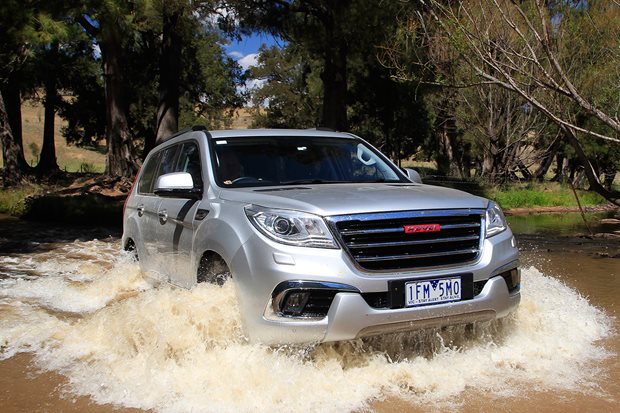 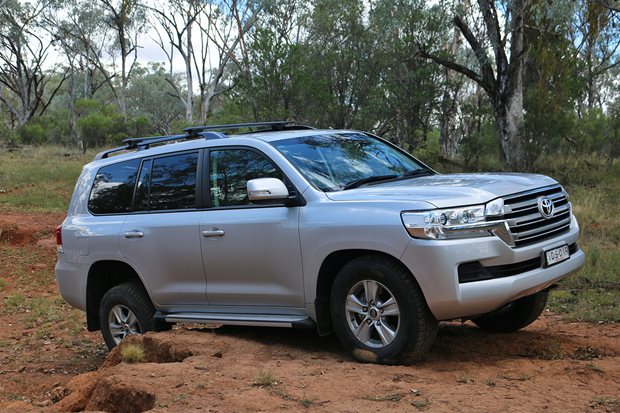 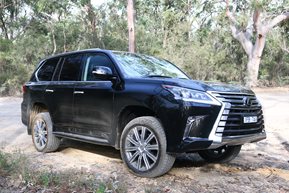