It's showing its age but the Pajero represents reasonable value for those looking for a competent and reliable off-roader.

This model is a minor update to the MY14 (model year 14) Pajero that was updated in 2013. It also brings a repositioning of the range, the basic shape of which has been on sale since 2006 (keep in mind, too, that the Pajero’s underpinnings are largely unchanged from the previous model that arrived in 1999.

Pricing for the Pajero starts at $50,990 (plus on-road and dealer costs) for the GLX, which comes with a reversing camera, Bluetooth, cruise control and separate air-conditioning controls for those in the rear.

There’s also a healthy dose of bling thanks to chrome highlights, LED daytime running lights and 18-inch wheels (with a full-size spare).

An auto transmission costs another $3000 and for most will be worth the spend.

Those wanting more gear can opt for the mid-grade GLS ($58,990), which adds auto headlights and wipers, reversing sensors, sat-nav, some splashes of fake leather and heated and electric front seats.

The top of the Pajero tree is still the Exceed ($65,990) and it brings leather and a better sound system, among other touches.

Mitsubishi may have freshened the exterior of this tweaked Pajero (there’s a new grille, front bumper and spare wheel cover, among other elements) but the interior hasn’t had the same love over the years and is starting to feel its age.

There’s a separate trip computer at the top of the dash and it uses old school graphics. Below it is the infotainment touchscreen that does the job but can occasionally be frustrating to navigate. And the main instruments lack the sparkle and simplicity of newer models, albeit with decent functionality.

Up front, though, the seats are comfortable enough for longer journeys and side steps and well placed grab handles make it easy to get in. There’s space for gear in the twin-level centre console, while cupholders and other binnacles take care of other items.

Those in the rear aren’t as well taken care of, with only seatback pockets. But the vents in the roof feed fresh air to all and there’s a separate controller, too.

The seats can take some practice to flip and fold but offer good headroom for three people in the middle row and a lot less space (mainly headroom) for those in the far rear.

For a capable off-roader the Pajero has decent body control, something appreciated on country roads and higher speeds. While the steering lacks the directness of the new breed of soft-roader SUVs it’s faithful enough and complements the larger body.

Comfort is OK, although despite improvements to refinement and noise levels the Pajero can still be noisy at speed.

Engine noise, in particular, is noticeable from the honest but ageing 3.2-litre four-cylinder turbo diesel. Its meaty 441Nm works well but a five-speed auto is off the pace in an era when most have six or more.

At least the part-time four-wheel-drive system can be shifted on the fly and is able to be driven on bitumen with all four wheels driving. It adds some confidence on slippery surfaces and, even though it’s one of the few systems with a separate gear lever to select 4WD, the mechanism is easy enough to operate.

The Pajero was one of the first of the serious off-road brigade to get independent suspension front and rear. But nothing radical has changed with that architecture, which first appeared in 1999.

That’s no bad thing, although wheel articulation is a sore point for the Pajero. It doesn’t take much to hang a wheel in the air due to the limited suspension travel.

Still, the Pajero is well equipped for many obstacles and it’s helped by its four-wheel-drive system. With locking centre and rear differentials and a proper low range transfer case it does a good job of diverting torque to wheels that are still on terra firma. But in rocks or areas where good wheel articulation is required it can ultimately reach its limits.

At 225mm, though, ground clearance is good and the Pajero protects its underside well.

The 18-inch Dunlop Grandtrek tyres are a familiar piece of kit and provide a decent balance between on- and off-road performance.

One negative is suspension noise, which can boom into the cabin on bumpy gravel roads, something amplified at speed.

Its showing its age but the Pajero represents reasonable value for those looking for a competent and reliable off-roader. It won’t follow a Discovery or Prado across the really rocky stuff, but it brings solid towing credentials, a five-year warranty and competent off-road ability to the seven-seat wagon party. 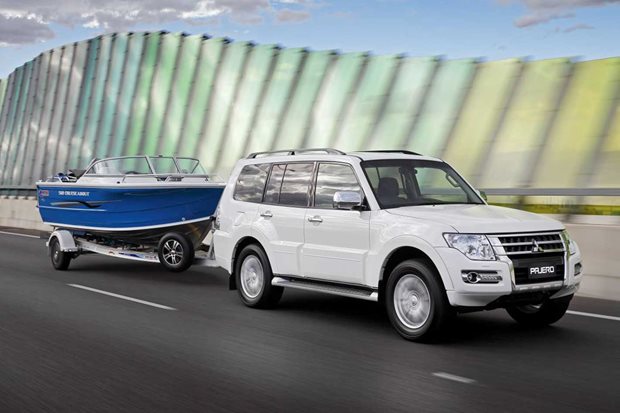 Long-in-the-tooth Pajero keeps on keeping on. 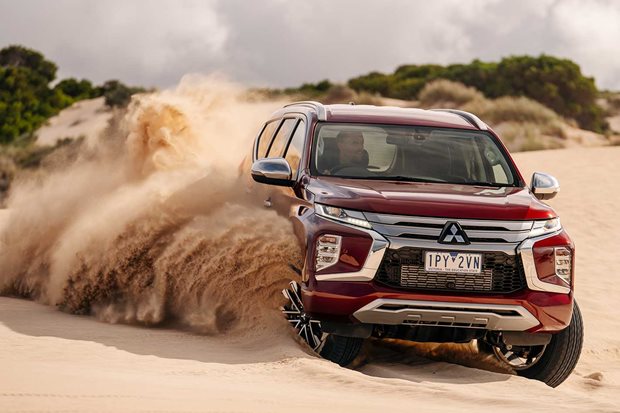