A regular V6 model that won't break the bank

The Pathfinder Hybrid sits alongside the regular V6 model in a multi-tiered range that covers a price spread of almost $30,000.

The Hybrid sells for $3000 more than the V6 Pathies and is only available in selected grades and configurations.

There’s also an around view monitor camera system that gives a virtual overhead view of the car as well as a tyre pressure monitoring system.

It’s all about the size with the Pathfinder. Up front there’s a big two-stage centre console and sizeable glovebox as well as cupholders that could cope with an American-sized bucket of your favourite sugar drink.

The seats are cushy but comfy enough for longer journeys. Those in the middle row aren’t overlooked, either, with a higher seating position and those air vents with a separate controller.

The middle row splits and slides to allow for easy configuring of the rear for those looking to maximise cargo space. The rear-most pews in the third row also fold neatly into the floor to reveal a long, flat luggage space.

It’s not all great news, though; one of our biggest issues is the central colour touchscreen, which is used for various infotainment functions as well as the sat-nav system. It is dimmed separately to the main instrument cluster yet even in its lowest setting it’s too bright for country roads.

The Pathfinder Hybrid also takes a step backwards on its towing ability, with the claimed maximum at just 1650kg (V6 models are rated at 2700kg).

In its latest guise the Pathfinder has focused more on on-road manners rather than off-road prowess. Gone is the ladder frame chassis and in its place a monocoque, in this case shared with the Altima sedan and Murano SUV (in a way it’s back to the future because the previous R50 Pathfinder sold between 1995 and 2005 sat on a monocoque too).

The result is a car that feels more comfortable and composed in everyday driving. Big 20-inch wheels with Bridgestone Dueler rubber look the business and grip well through bends, although the steering isn’t as accurate as it could be.

The Pathfinder also does a reasonable job of dealing with larger bumps, although smaller ones at lower speeds are more noticeable than they should be. It’s also relatively hushed at speed.

But it’s the Hybrid TI's system that is more impressive. The four-cylinder engine uses its technology well – supercharger and a 15kW electric motor – to deliver V6 performance (there’s 188kW of power versus 190kW in the 3.5-litre V6-powered Pathfinder).

In fact it’s arguably better because the muscular 330Nm torque peak arrives at 3600rpm, ensuring energetic acceleration. That’s enough to overwhelm the grip at the front wheels if you’ve got the All Mode 4WD selector in 2WD, but the Auto mode solves the problem.

It’s only a mild hybrid system, though, so still relies on the petrol engine most of the time. Still, claimed fuel use of 8.8 litres per 100km is good for what is a big, heavy vehicle. We found it using about 11.5L/100km during a mix of driving that included a stretch off-road.

The softening of the Pathfinder has done nothing for those wanting to get more adventurous. A glance down the specifications sheet reveals some less than impressive numbers, such as just 165mm of ground clearance and a marginal 14.3 degree approach angle. The space saver spare tyre is also a major limiting factor, although there’s a repair kit on board too (if you have to revert to that then your luck has really run out…).

And it doesn’t take long to show up its limitations. Wheel articulation is modest at best and once a wheel loses traction it can wheelspin and scrabble as the traction control tries to sort things out.

Those electronics don’t always get it right and even with the All Mode four-wheel-drive system in its Lock position it’ll still get stuck if one or two wheels aren’t firmly planted. The Lock mode is more about sending power front and rear all the time rather than locking differentials, all of which remain open all the time.

We also managed to temporarily overheat the hybrid system in some more challenging off-road conditions, something that flashes a warning to the driver. The owner’s manual warns that it can revert to two-wheel-drive if the All Mode system gets too hot, too.

Ground clearance, too, is nothing special so it pays to be conscious of the placement of wheels and so-on.

It’s more gentle tracks and some snow for the Pathfinder Hybrid, a car that works relatively well in the city. The Hybrid system is worth a look, though, bringing decent fuel saving advantages with no performance penalty.. 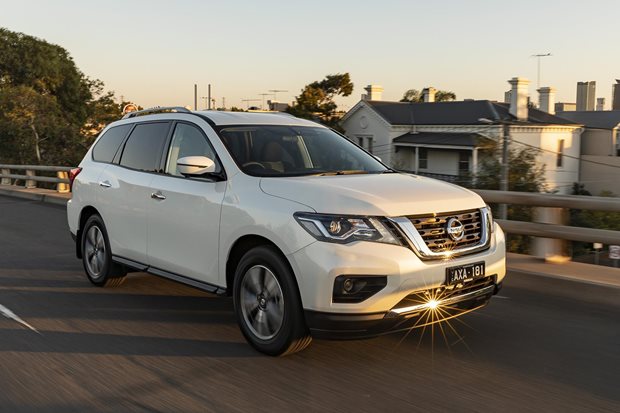 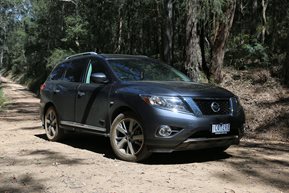