Much more than a Prado in fancy dress, Toyota’s mighty FJ Cruiser is unfortunately no more.

JUMP in our time machine for a quick spin back five years. It’s the end of 2011 and we are lining up the pick of the year’s crop for our slugfest known as 4X4 of the Year.

Given we only allow newly released 4x4s into the contest, not all years are as strong as others. But that certainly wasn’t the case in 2011, which produced a bumper crop of serious contenders.

Starting equal favourite was the then-new and still effectively current WK Jeep Grand Cherokee, fitted for the first time with a diesel engine (a high-tech, European-sourced 3.0-litre V6, no less). The WK had taken the previous year’s title on debut, due to its petrol V6 and stunning value for money, so it wasn’t to be taken lightly.

Range Rovers also traditionally do well at 4X4OTY, so the new 700Nm 4.4-litre V8 bi-turbo-diesel Rangie was looking good. As was the brick-dunny-tough Mercedes-Benz G-Wagen G350 diesel – triple diff locks and all. The Merc was back in Aussie showrooms off the back of its then-new Australian Defence Force contract. 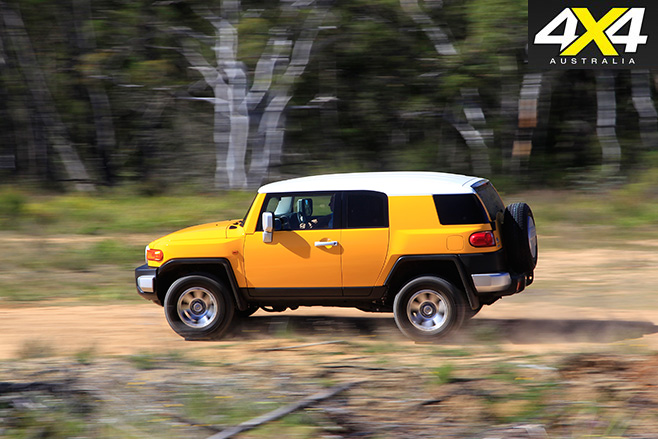 The final contestant was the controversially styled Toyota FJ Cruiser, the only one of the five short-listed vehicles not to feature a modern turbo-diesel engine. Back then, a turbo-diesel donk was seemingly a prerequisite for success at any level, so no one gave the FJ Cruiser a chance.

After a week of rigorous testing, the six judges – with more than 200 years of collective 4x4 experience – saw it differently. In what was a triumph of the underdog, the FJ Cruiser came from the clouds to sweep all before it.

Fast forward to 2016, and word is out that production of the FJ Cruiser is coming to an end in a matter of months. This follows its withdrawal from its key (and birth) market, the USA, in 2014, and effectively brings to an end the short life of a very remarkable vehicle, both in terms of how it came about and what it did once it made it out into the world.

THE HISTORY
THE idea for the FJ Cruiser didn’t originate from Japan’s Toyota HQ; it was born in the USA.

It dates back to the mid-1990s, when some US Toyota employees thought that something with the rugged, go-anywhere ability of the original FJ40, but with contemporary underpinnings, might get the interest of young US males – a market where Toyota considered it was losing touch. In other words, it wanted a Jeep Wrangler competitor. 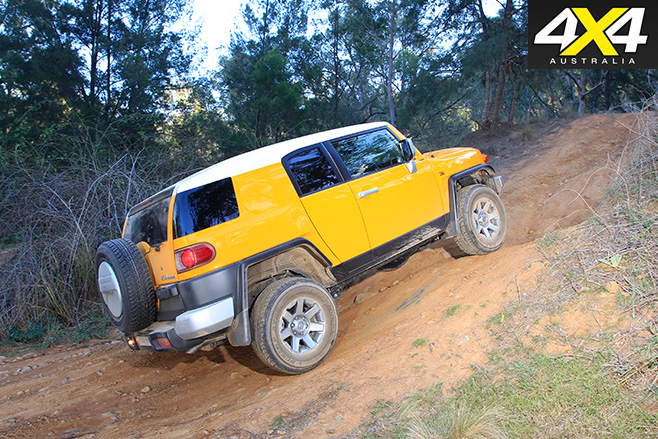 In 1999 at the Chicago Auto Show, the ‘Retro Cruiser’ was revealed. This was a modified 1967 FJ40 created by off-road racer and vehicle builder, Rod Millen. The Retro Cruiser was more than a concept vehicle, as it was a running prototype combining a contemporary Land Cruiser chassis and V8 engine with an FJ40 body.

With backing from Toyota HQ in Japan, the project was handed to Toyota’s Californian design studio, which delivered the FJ Cruiser Concept at the 2003 North American International Auto Show in Detroit. It sparked enough interest for Toyota to decide the FJ Cruiser was a viable commercial proposition.

The production version, with essentially the same exterior styling as the concept vehicle but with a toned-down interior, debuted just two years later at the 2005 Chicago Auto Show. Its debut followed rigorous testing and development, including extensive off-road evaluation at various locations such as the Rubicon Trail. 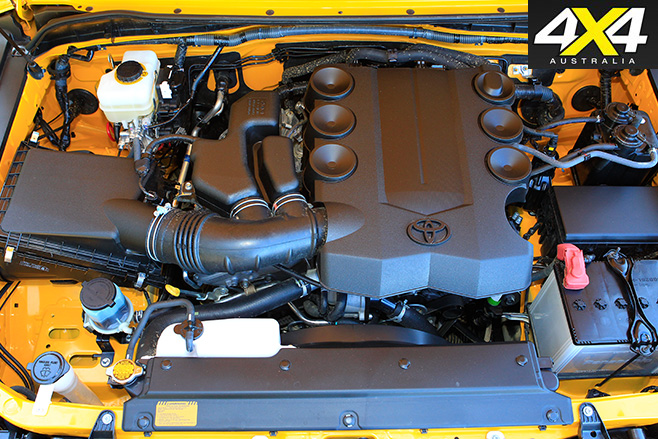 The FJ Cruiser didn’t arrive in Australia until mid-2011. By that time it was effectively a second-generation model, as the original FJ was based on the 120 platform, whereas the Australian-delivered FJ had many of the changes that came with the 150 Series Prado.

BEHIND THE WHEEL
THE FJ Cruiser is a vehicle you have to drive to appreciate. Just looking at it – even if you know it’s essentially a different body on a shortened-wheelbase, part-time-4x4, petrol-powered Prado – won’t tell the whole story.

Compared to a Prado, the big negative is interior space and seating capacity. The payload and towing capacities are also slightly reduced, but in just about every other way, both
on- and off-road, the FJ Cruiser is a better vehicle.

It all starts with the highly underrated 200kW 4.0-litre V6. This 150 Series engine has variable valve timing on both cams, not just the inlet cam as per the 120 Series engine. 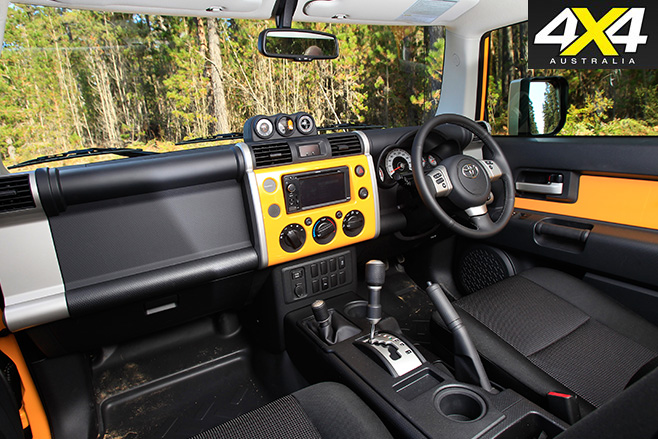 In typical Toyota fashion this is a soft-tune engine, where power spread, not peak power, is the name of the game. The engine is mated to the five-speed auto (from the 120) and a part-time, dual-range 4x4 system (from the HiLux) – unfortunately a retrograde step from the Prado’s full-time 4x4.

At 2000kg the FJ Cruiser is around 300kg lighter than the petrol Prado, and this helps to accentuate the engine’s flexibility and its considerable top-end urge. The generally agreeable five-speed gearbox works well with the engine and has gated shift, rather than a tip-shift, for ‘manual’ control.

The soft tune of this engine helps with fuel economy, one of the surprise reasons why the FJ Cruiser won 4X4OTY. In that week-long contest, which included a fair deal of off-road tracks, it used 15.4L/100km to be the thirstiest vehicle there – as you’d expect, being the only non-diesel. But the difference wasn’t much: the LC200 GX used 15.3L; the G-Wagen 15.1L; the RR TDV8 14.5L; and the Jeep GC 12.2L/100km.

The FJ Cruiser’s reduced weight and better mass centralisation of its compact body also makes for surprisingly good on-road dynamics, even with the supple long-travel suspension that produces an excellent ride on even the bumpiest road. 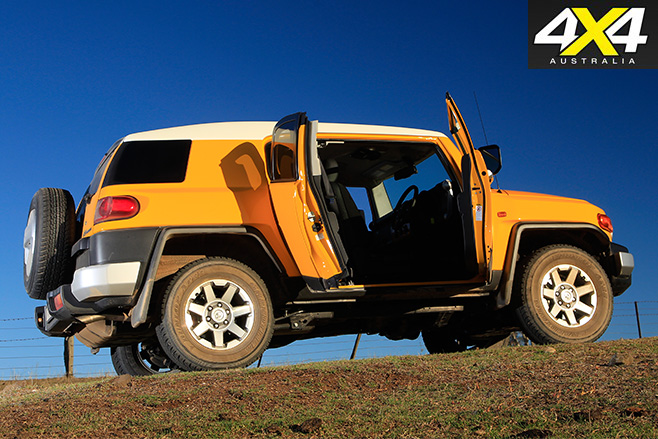 Off-road the FJ Cruiser has many things going for it, not least the best approach and departure angles of any Toyota 4x4. For example, compared to a Prado, it has a steeper approach angle (36 v 32 degrees), better ramp-over angle (29 v 22 degrees), steeper departure angle (31 v 25 degrees), and slightly improved ground clearance (224 v 220mm). All of that is in addition to its capable, Prado-derived long-travel suspension.

The FJ comes with a driver-operated rear diff lock and, while engaging this negates the normal traction control on both axles, the driver can reinstate off-road-specific traction control (A-TRC) across the front axle, even when the rear diff is locked. With its entire off-road armoury lined up, the FJ is closing in on the Wrangler Rubicon territory in terms of showroom-stock off-road ability.

Inside, the FJ is like no other Toyota 4x4, with forward and upright A-pillars and a retro-styled slab dashboard. Two rear-hinged doors give good access to a decent rear bench, while the front passengers are treated to the typically comfortable Toyota seats – the driver’s seat having the benefit of height adjustment. Not bad luggage space, either.

ON REFLECTION
MORE than 11,000 FJ Cruisers have been sold in Australia since 2011 (around 180 per month). Compared to the Prado, sales of which run at 1200 to 1300 per month, this isn’t significant, but given more than 98 per cent of Prado sales are diesels, one can only speculate on FJ Cruiser sales if it was available as a diesel. 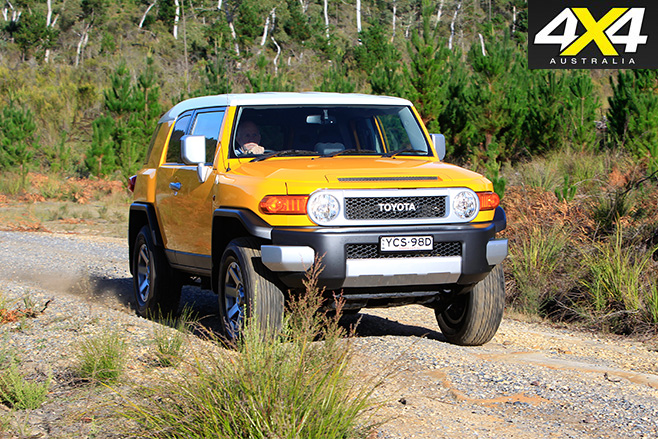 Still, you don’t hear owners complaining about the FJ’s 4.0-litre petrol V6 in terms of performance or fuel economy. And they all seem to appreciate the FJ Cruiser’s Toyota-typical practicality and the fact there’s a good range of aftermarket enhancements to back up its off-road functionality. You certainly see a surprising number of FJ Cruisers out and about on the back roads and bush tracks given their modest sales volume.

After driving the FJ Cruiser once again for this feature, it has stood the test of time and doesn’t feel ready for retirement in any sense. Above all, the FJ Cruiser was an enthusiast’s 4x4 delivered by a manufacturer renowned for conservative, family-orientated 4x4s. Let’s hope Toyota throws off that conservative yoke again sometime soon.

THE FJ Cruiser pays homage to the FJ40, which wasn’t the original Land Cruiser but was the vehicle that established Toyota as a pre-eminent manufacturer of 4x4s. The 40 Series was a development of the 20 Series, which in turn was effectively a renaming of the original BJ. 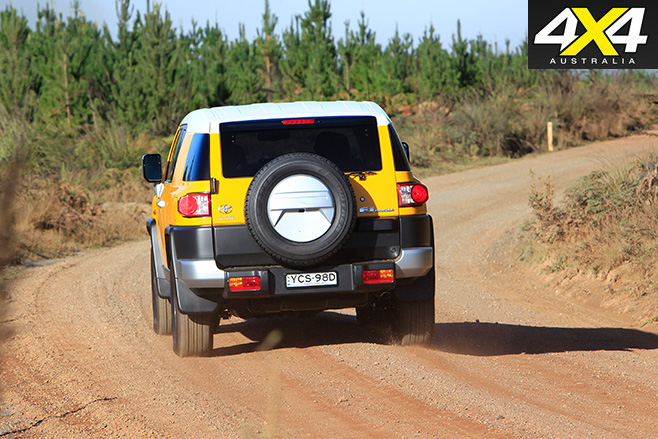 The 40 Series was replaced by the 70 Series, and if the FJ Cruiser was based on a 70 Series then its bloodline would be much more direct. As it is, the FJ Cruiser is based on the 120/150 Series Prado and its links to the FJ40 are more stylistic – ‘TOYOTA’ grille badge, round headlights, white-finished roof, steep windscreen with three wipers, and the slab dashboard.

ACCORDING to RedBook, the projected resale value of the FJ Cruiser after three years runs at 62.5 to 63 per cent, colour-dependent. That’s at the bottom end of the resale value of Toyota 4x4s in general, but applies before the announcement that production will cease.

The effect that announcement will have on FJ Cruiser resale values is yet to be seen. By way of comparison, Prado projected value runs between 63.8 and 67 per cent; Fortuner between 66.5 and 67 per cent; and LC200 between 71 and 73 per cent. 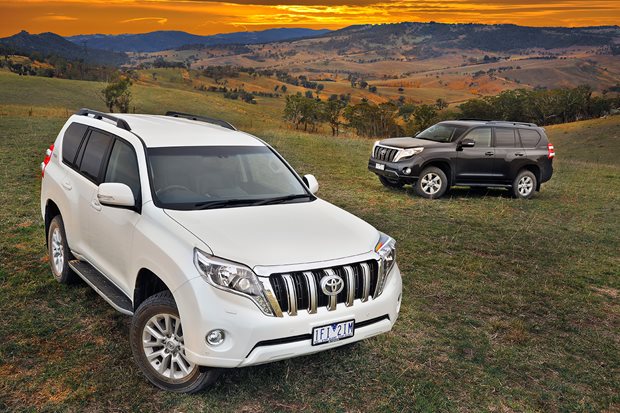 Some Prados come with Toyota’s Kinetic Dynamic Suspension System, others don’t. So what’s the difference? 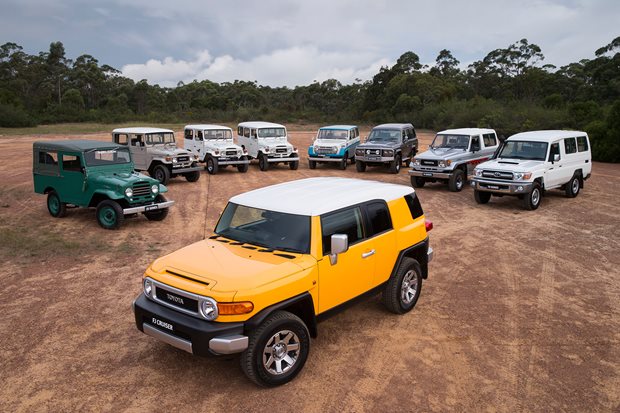 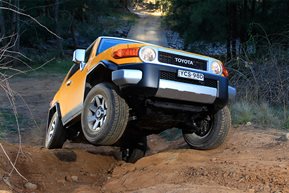