The Prado 150 Series has gone under the knife, getting a smaller diesel engine and an extra ratio in the auto ’box. But is it any better?

Not that you know from just looking at it, but the 150 Series Prado now has a new and smaller diesel engine and a six-speed automatic gearbox; the 150’s first significant mechanical change since it arrived in ’09.

This updates Prado also comes with a revised petrol V6 and some detailed equipment changes, but the overall model line-up, which includes diesel in four spec levels and petrol in three spec levels, is unchanged. Despite the new engine and gearbox, the tow rating also remains unchanged at 2500kg, a significant 1000kg less than Prado’s nearest competitors: Jeep’s Grand Cherokee and the Land Rover Discovery.

The diesel engine in question – an all-new 2.8-litre four-cylinder that will also power the soon-to-arrive eighth-generation Hilux and its offshoot, the Fortuner wagon – is important for Toyota well beyond its significance in the new Prado. The move to an engine that is 227cc smaller than the outgoing 3.0-litre reflects a global shift towards smaller diesel engines in this general class of vehicle, 4x4 utes included. Indeed, Toyota even calls this new engine the GD, for ‘Global Diesel’. 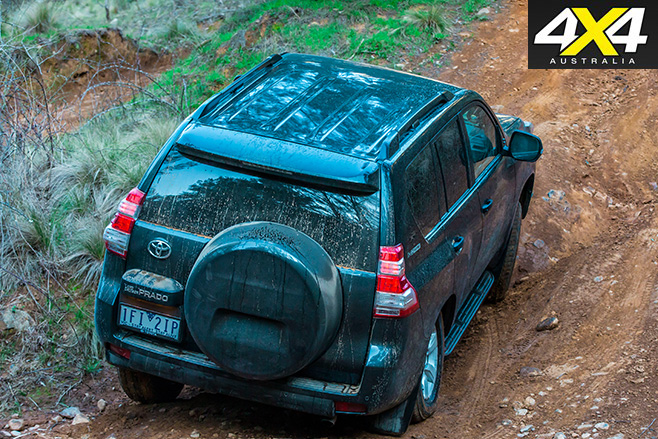 Despite the capacity drop, there’s a significant 40Nm increase in maximum torque, which is now 450Nm (available from 1600rpm) when mated to the also-new six-speed automatic gearbox. There’s also a marginal 3kW increase.

When mated to the carried-over six-speed manual, the maximum torque is only up 10Nm to 220Nm, but arrives 200rpm earlier at 1400rpm.

As well as being smaller, this new engine runs a significantly lower and ‘softer’ compression ratio than the 3.0-litre. It’s now 15.6:1, down from the 17.9:1, a change that makes for quieter and smoother running.

That a smaller engine with a lower compression ratio can produce significantly higher torque at the same or lower engine speeds is testament to its latest generation high-pressure (2500bar) common-rail fuel injection system and more sophisticated variable-nozzle turbocharger. 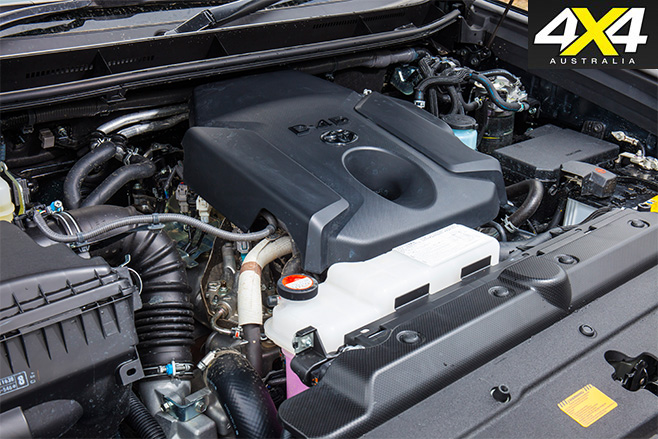 The 2.8 is also even more undersquare than the 3.0-litre it replaces as it has a fractionally longer stroke, despite the overall decrease in capacity.

Other significant changes from the 3.0-litre include the adoption of a chain rather than belt to drive the overhead cams, roller rockers for valve actuation, and the use of one, not two rotating counter-balance shafts to quell the vibration that’s inherent with any in-line four-cylinder.

While this engine’s extra torque is most welcome, the fact that the engine is quieter and smoother running is the biggest leap forward from the 3.0-litre. It simply just doesn’t sound or feel as diesel-like, with no diesel ‘rattle’ and much-subdued diesel ‘knock’. You can still tell the 2.8 is an oiler, but it’s certainly a lot quieter and smoother at all engine speeds and under varying loads and throttle applications, and makes for a better all-round driving experience. 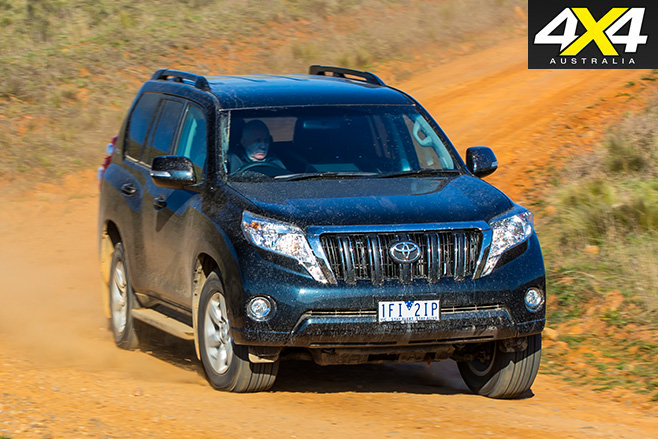 While the low-rpm engine’s response has been improved, the outright maximum performance is only marginally better than the modest get-up-and-go of the outgoing 3.0-litre diesel engine.

For its part, Prado’s new six-speed automatic gearbox is also more to do with refinement than extra performance.

Effectively, the six-speed just adds an extra, very tall overdrive ratio, so it has two overdrives rather than one. In fact, fifth gear in the new six-speed is even marginally taller than fifth in the old five-speed, while sixth is a significant 19 per cent taller than the five-speed’s fifth.

Both ’boxes have an identical 1:1 direct-drive fourth and similar lower gears with the first three in the six-speed being all fractionally shorter than the equivalent gear in the five-speed. 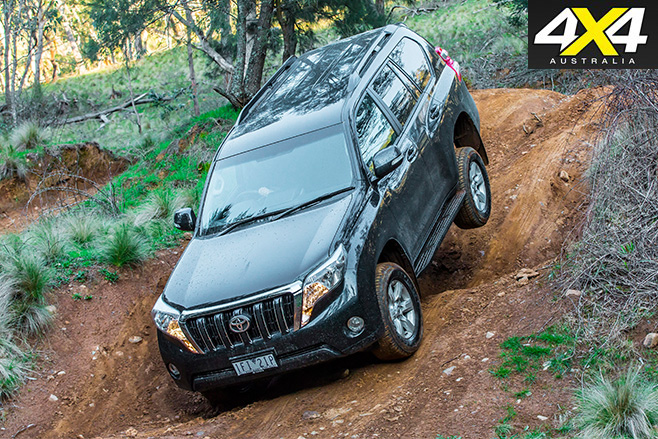 Toyota claims to have put much work into the shift protocols controlling the change from fifth to sixth and back again, an issue early on with the 200’s six-speed gearbox, which also has two overdrive gears.

On the road the six-speed is slicker and quicker shifting than the five-speed, but it’s still no ZF eight-speed in terms of overall shift quality.

In general give and take on country roads, it often won’t pick up the extra-tall sixth gear, but at least it doesn’t fuss around excessively between the two overdrive gears.
Economy benefits over the old powertrain are marginal with the official ADR ‘combined-cycle’ figure dropping from 8.5 to 8.0L/100km, a change that’s reflected in our on-test average of 9.6L/100km for mainly country driving. Under similar conditions we would expect the 3.0-litre would use around 10.0L/100km. 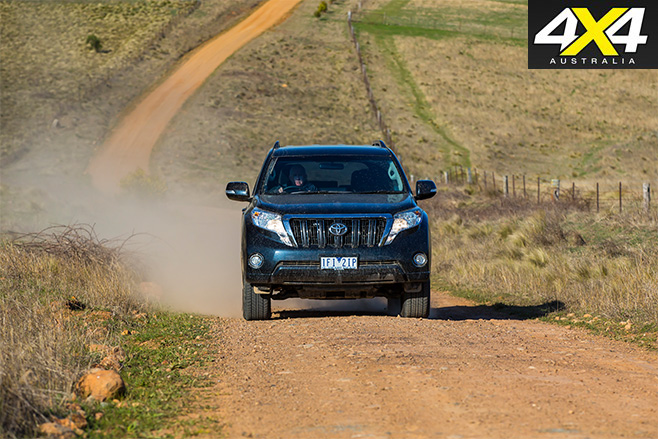 With first gear, in the six-speed, only being two per cent lower than first in the five-speed, the off-road ‘crawl’ ratio isn’t significantly better, but the low-range shift quality is certainly improved. Where the five-speed was often quite abrupt and lurchy with its low-range shifts, the six-speed is much smoother. The extra torque that the engine has at lower rpm also means the manual works very nicely for low-speed off-road work.

Otherwise the Prado is much the same off-road as its predecessor, which means its very capable straight off the showroom floor. For that you can largely thank the soft and supple long-travel suspension. 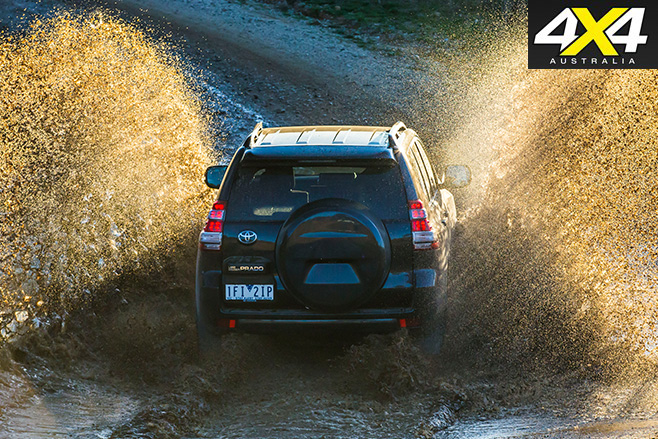 The compliant suspension also means a comfortable and quiet ride on all road surfaces and, as ever, the Prado is an effortless mile-eater and a great back-roads tourer, even if the handling isn’t as sharp as it could be. Those after a sharper-handling Prado will need to fork out more for one of the more expensive models with KDSS (See ‘Suspension Twist’ sidebar on page 32).

The Prado is largely unchanged inside, although the volume-selling GXL model gains satellite navigation as standard while the top-spec Kakadu gains rear cross-traffic alert, a particularly handy feature in country towns with nose-to-kerb angle parking. 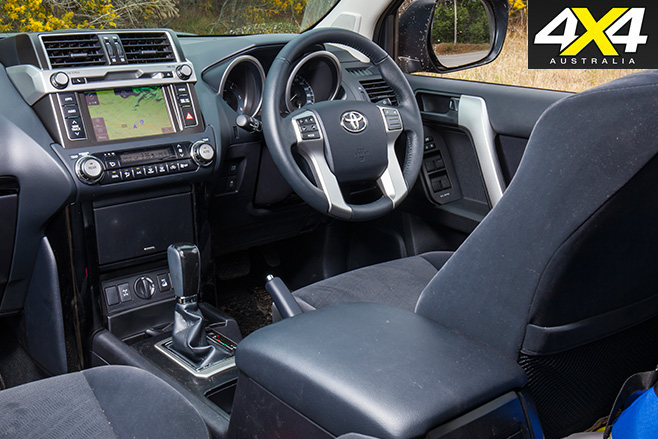 As ever, the cabin is comfortable and roomy; although, the 150’s third-row seats, which are located under the floor, do eat into the functionality of the luggage space. The 120 Series had a better arrangement; its third-row seats folded up against the rear windows.

All Prado’s have a five-star ANCAP safety rating, despite the fact that the Kakadu has far more safety equipment than the lower-spec models, something that’s not reflected in the flawed ANCAP system.

The Prado’s new 2.8-litre diesel/six-speed auto powertrain is a worthwhile and welcome advance over the outgoing 3.0-litre/five-speed, but it is still no Discovery or Grand Cherokee V6/eight-speed in terms of performance or refinement … not that it really needs to be, as the current sales figures show. While the Grand Cherokee did outsell Prado last year, it hasn’t so far in 2015, and Discovery sales have always been a distant third in this contest. 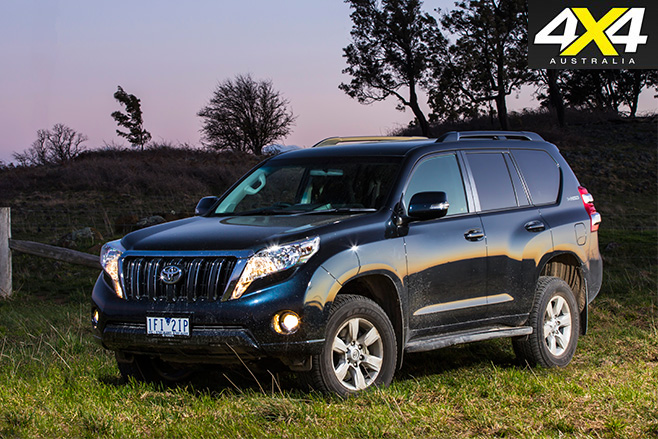 Likewise the Prado’s 2500kg tow rating hasn’t been a sales problem in the past, so there’s no reason why it will be a problem in the future. That said; there’s nothing stopping Toyota re-specifying the Prado to tow more. After all, the same powertrain in the up-coming Hilux is rated to tow 3500kg… As ever, the GXL is the pick of the range even if it doesn’t have KDSS, and the $12K hike to the KDSS-equipped VX seems a big ask. 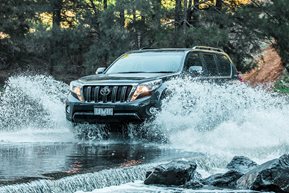