Subaru has taken the knife to Outback prices with the latest fifth-generation model. 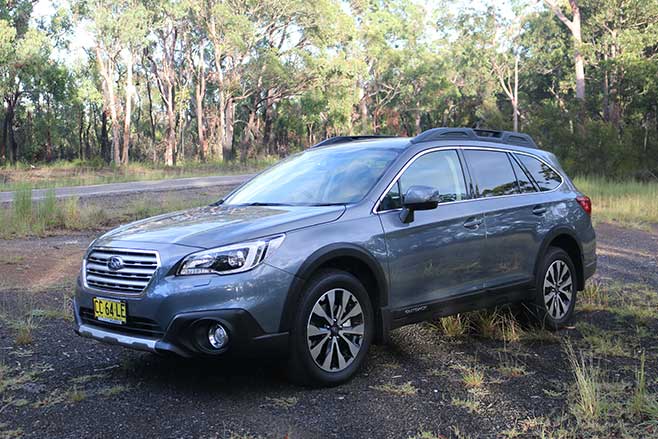 Subaru has taken the knife to Outback prices with the latest fifth-generation model. Prices start at $35,990 (plus on-road and dealer costs) for the most affordable 2.5-litre petrol model, which includes a standard auto transmission. Included in the deal are dual-zone air-conditioning, automatic wipers, auto headlights and 18-inch alloy wheels. There’s also the Eyesight safety system, which combines auto braking, lane departure warning and active cruise control.

The diesel is $35,490 but that’s for the manual; an auto adds $2000 on to the price. The diesel matches the petrol model on equipment except for the Eyesight driver-assist system, which isn’t available yet. It also gets 17-inch wheels instead of the 18s on other variants.

There’s also a six-cylinder engine available exclusively in the premium range for $47,990. 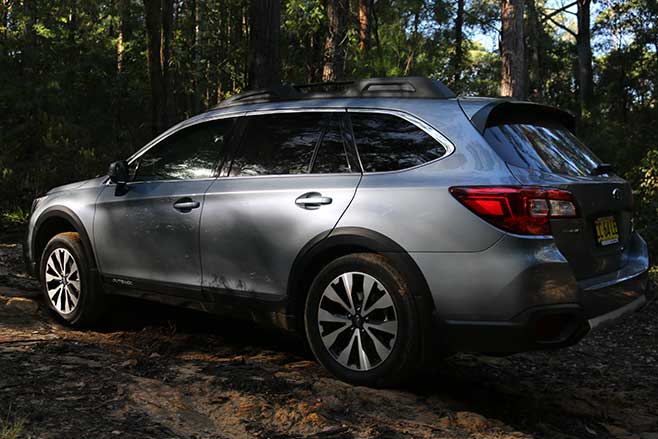 Being based on the Subaru Liberty (the Outback is now the only one that uses the wagon body style, with the Liberty now exclusively a sedan) the Outback is more car than traditional 4WD or SUV in its basic composition.

But the new body is 25mm longer, 25mm higher and 20mm wider than the model it replaces. That translates directly into more interior space, and the Outback is now noticeably larger inside than previous generations.

It’s genuinely comfortable for four adults, with five at a pinch. Head and leg room are great front and rear, while the seats are supple yet supportive.

The cabin is also nicely presented, from the logical buttons and controls (the electronic handbrake is a particular highlight for its functionality and design) to the large touchscreen (the Premium tested here gets a 7.0-inch screen, up on the 6.2-inch screen in basic models). 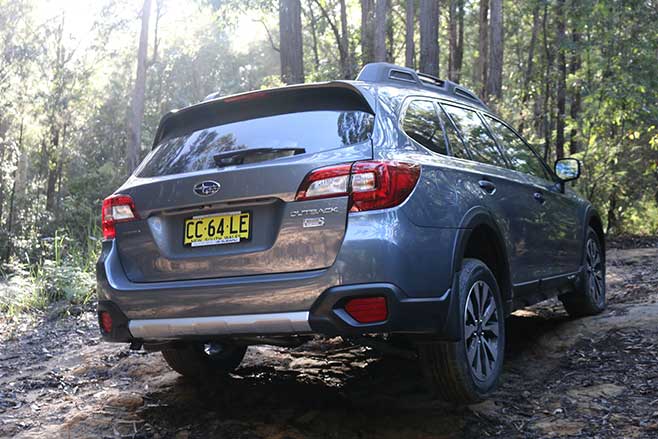 SUVs don’t get much more car-like than the Outback. That’s because it is a wagon version of the Subaru Liberty medium car but with a higher ride height.

On-road dynamics, then, are very good and the Subaru is an easy car to live with around town. The suspension tends towards firm at lower speeds but is more compliant above 60 or 70km/h.

Our Premium model ran on 18-inch Bridgestone rubber, which gripped very well on bitumen and cemented the Outback as a confident vehicle.

The diesel engine is nothing special on the power front – just 110kW. But the 350Nm is more on the money and ensures hearty response, albeit with some initial turbo lag.

And while the power is produced at 3600rpm, the CVT does its best to make the most of what's on offer by quickly reacting to throttle inputs and adjusting revs accordingly. Interestingly, under full throttle the CVT does mock gear shifts, dropping revs from about 4000rpm to closer to 3000rpm before building up again (other CVTs simply hold an optimum rev point until you've reached the appropriate speed). 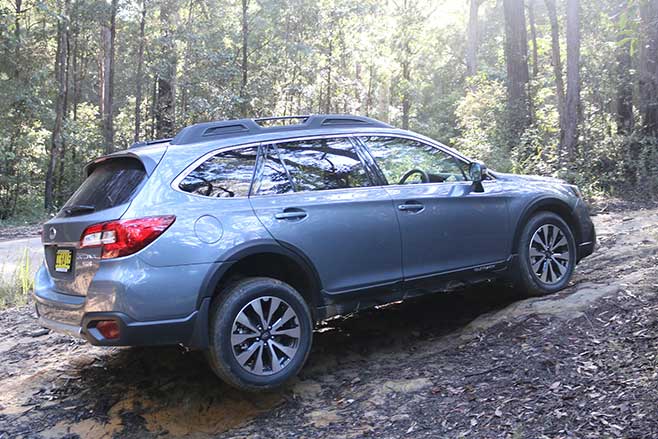 Being based on a passenger car, the suspension travel isn't great, something that becomes obvious early. While it quickly extends to its maximum, it doesn't take much of a cross-up to leave a wheel hanging in the air.

The constant four-wheel drive system can take a moment to recalculate, although pressing the X-Mode button improves traction by more quickly responding to wheel spin; X-Mode tailors the traction and stability control systems to off-road conditions, optimises the throttle response and activates the hill-descent control system.

The hill-descent control is okay for less rugged trails but the speed cannot be adjusted and keeps the car travelling at about 6-8km/h, which will be too fast over more rugged sections; best to forget them, then.

The 213mm of ground clearance is more than acceptable and ensures rock-hopping ability beyond what may be expected from a high-riding wagon; a full-sized spare tyre is also a plus. But underbody protection is made of light-weight plastic that doesn’t look prepared for a good rock strike.

It would also pay to be careful of the bumpers at either end, with modest approach and departure angles. The 17.8-degree approach angle, in particular, is one to be aware of.

The on-road-biased tyres are respectable for the light duty work the Outback is designed for, although it’s the 17s on the base diesel model (the only Outback to get 17-inch wheels) that make most sense for those planning to get more adventurous.

As an aside, while the air scoop on the bonnet has disappeared, the intercooler for the turbo still sits on top of the engine and out of the way of sticks, rocks and other obstacles. Fresh air is fed to it via hidden scoops beneath the lip of the bonnet.

Those looking to tow will be limited to a modest 1700kg load. 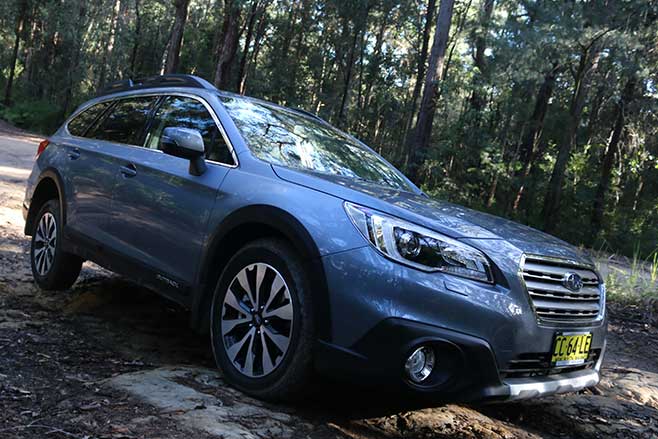 It’s no serious off-roader – but it’s not meant to be. As a light-duty off-roader with plenty of equipment and on-road talent, the Outback makes for sensible buying. And it earns plenty of points with its fantastic on-road demeanour.

Click here to read the full range review of the Subaru Outback. 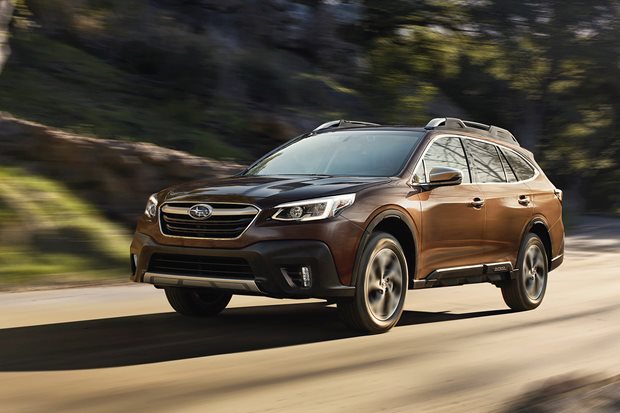 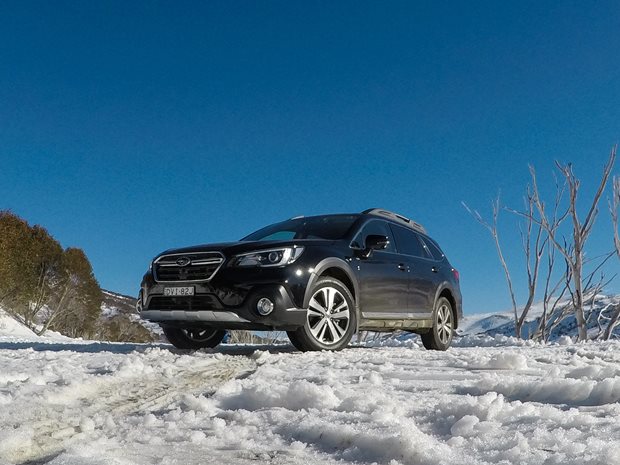