Shawn Karn's KARNAGE VS Commodore burnout car lives up to its name at Brashernats Sydney!

SHAWN Karn hasn’t had a whole lot of luck when it comes to his blown and injected VS Commodore burnout car KARNAGE. It certainly lives up to its name, having had its fair share of hits with the wall and tyre fires.

We last saw Shawn skid at Ultimate Burnout Challenge earlier this year at Winton where the car got very toasty, burning rear end after a pretty nasty tyre fire. Shawn patched her up and was ready to skid again at Brashernats in Sydney this weekend, but once again carnage struck! 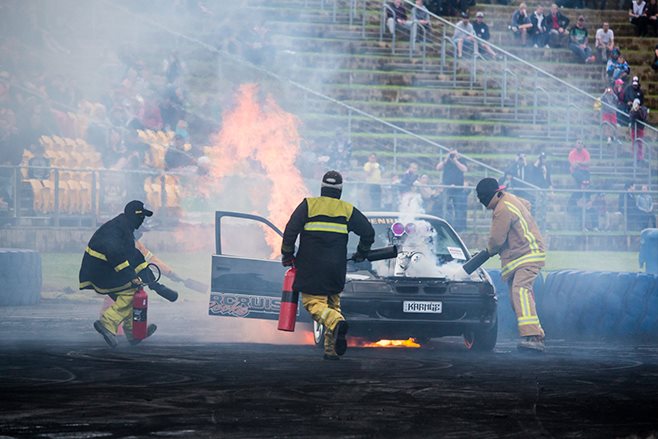 The skid was going really well, starting off with a big high-speed tip-in but shortly after a tyre fire sparked up under the rear tyres and when the flames caught some oil leaking out of the back of the engine it really went up. The flames even came up into the cabin!

“Yeah one of the rubber grommets under the car burnt out and the flames came straight up into the cabin, I quickly took the car out of gear and jumped out but it still singed my clothes,” said Shawn. Shawn reckons the body is all repairable, but his 377ci small-block Chev also dropped a valve on cylinder eight so he’ll be stripping her down for a rebuild.

Fortunately the firefighters were quick to jump in on this one and put the flames out, it could have been a lot worse for Shawn and his car had the flames really got stuck into the interior. It goes to show how important it is to have a fire suppression system is in a car like this – click here to see how to install one yourself!