IT FEELS like a lifetime ago when we laid down some cash for a well-worn 577,000km taxi, but we’re getting pretty close to some turbocharged quarter mile action. The Turbo Taxi is alive!

If you have no idea what we’re talking about, here’s a quick refresher. Back in February we bought a bog stock FG Falcon taxi for $2750. It’s yellow, runs on LPG and has 577,000kms on the clock. Our plan was to turbocharge the taxi and tweak it until it does tens, while still running on LPG. 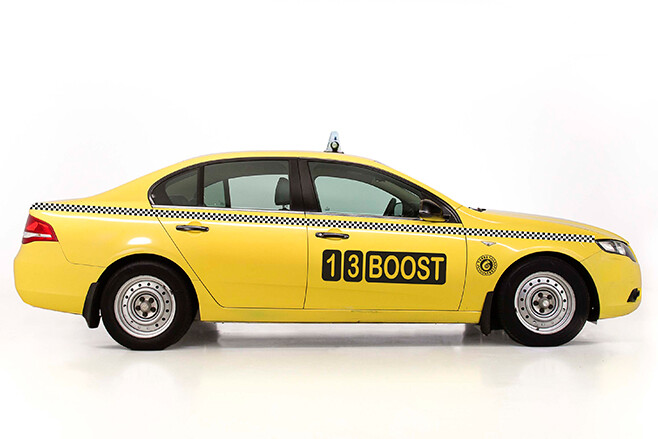 But our taxi had a problem; the engine had a pretty severe bottom end knock. So we found a cheap $200 replacement and slotted that in for a quick and easy fix. Being tight-arses, we used the cheaper petrol motor – which has weaker rods than the LPG motors. So our ‘new’ plan is to see how far we can push the petrol motor before we put an LPG donk back in and crank up the boost. To kick off episode three, Andrew from Extracted Performance Exhaust has made us a custom four-inch stainless exhaust system. It’s a work of art and we decided to see how it would sound without a muffler. As it turns out it’s a little bit loud, so we’re going to head back over to Extracted to get a muffler fitted before we do too many miles in the taxi. The four-inch pipe is pretty damn sexy, we’ll give you the tip. While all that was happening, Jason from Tunnel Vision was preparing our intake manifold for its custom LPG injection set-up. Up to this point most of the mods (including the Plazmaman gear and GCG’s Garrett GT35/84R turbo) have been bolt in, but the LPG injection is a bespoke deal. Jason has fitted twin 10mm lines from the 90-litre LPG tank up to a pair of lock-off valves and two Impco converters which in turn feed a custom distribution block mounted below the FG XR6 turbo intake manifold. 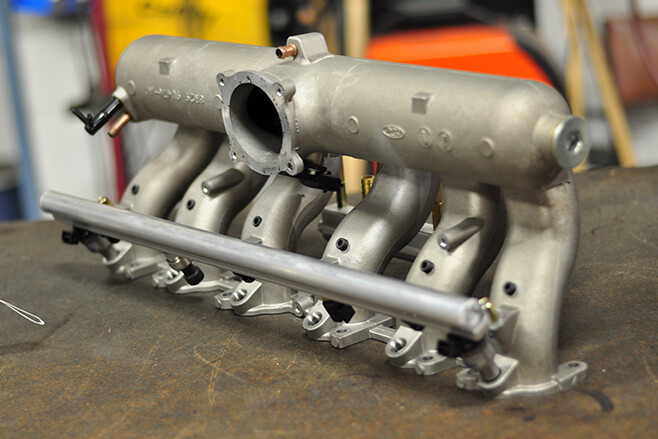 With everything wired up and ready to go Jason had to write a calibration to get things started. Haltech is working on a plug and play system for the BA/BF/FG Falcon but it’s still a couple months away, so for the time being Jason has to do everything from scratch. Our Haltech 2500 Elite is running as a piggyback with the factory computer at the moment. The factory computer controls the auto transmission and other features while the Haltech concentrates on the engine management. 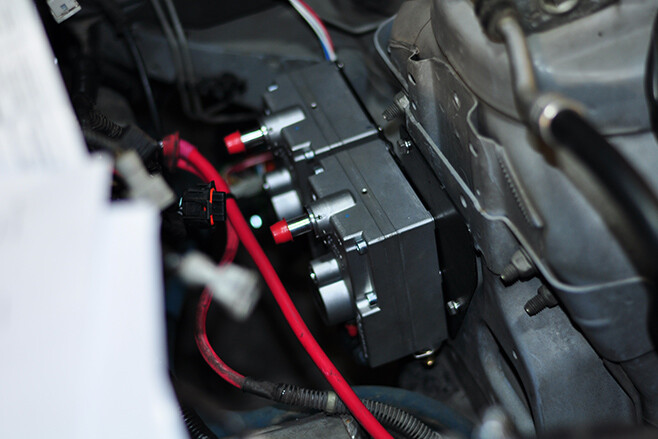 Once we hit the key, the four-litre Barra fired right up. At this point we didn’t have the charge pipe hooked up; Jason wants to do some fine tuning before we throw boost into the engine. But it was loud; it was really loud, and without much fuel in the tank we had to head to a servo ASAP. On the road the part throttle is unbelievably sharp, but when you try and open it up fully you can feel the turbo strangling the engine. It sounds weird to drive, there’s so much exhaust and turbo noise but without the wild acceleration to match. Don’t get us wrong, it goes pretty well for a LPG taxi but we can’t wait until that boost hit arrives In next month’s episode, we’ll hit the dyno and then put it down the quarter mile! If the stock gearbox and diff hold up, we might even crack a respectable number. See you then!