Our twin-turbo V8 Mazda MX-5 comes to life and we head to Alice Springs for Red CentreNATS!

MANY folks – including me – were scratching their heads when the news dropped that the next car for our Carnage video series would be a Mazda MX-5. Known as a Miata in the US and Japan, the MX-5 is – rightly or wrongly – widely derided as a hairdresser’s car. And while it is true that they do handle a set of corners with aplomb, it is also the case that they are seriously lacking in horsepower.

Nevertheless, our Scotty had a vision of an MX-5 fitted with the ubiquitous LS1 V8, assisted by a pair of large turbochargers poking through the bonnet and balanced visually by a tubbed rear end capable of holding a set of 275 radials. The source of this inspiration? The idea of building something really wild to take advantage of the special street permits on offer at Red CentreNATS in Alice Springs. 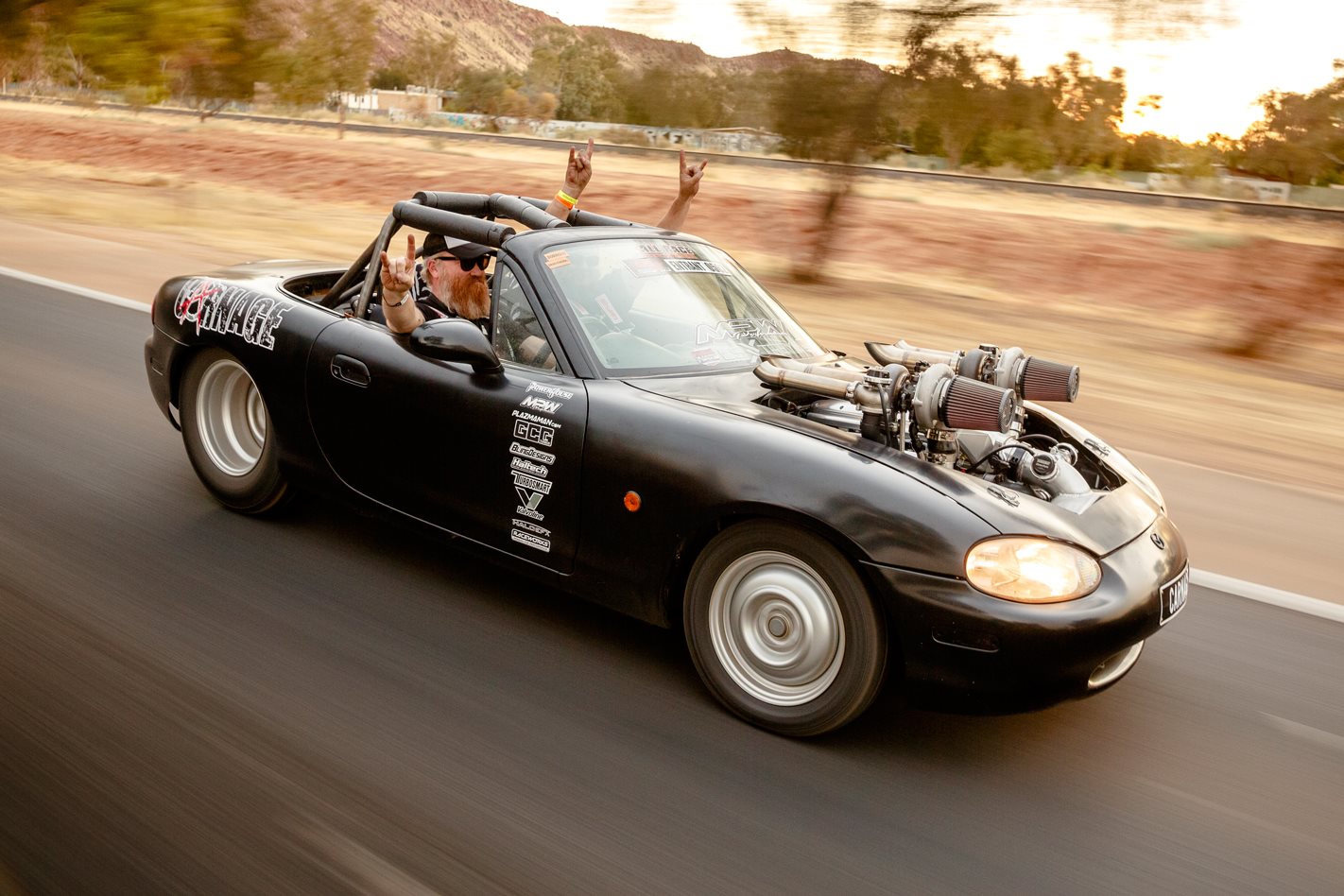 It was an ambitious project, with an even more ambitious timeline, but with many hours of hard yakka and lots of help from some talented folks, we had the MX-5 on a car trailer and heading from Melbourne to Alice with zero time to spare.

By this stage, the MX-5 – which is purely a drag/Summernats-special build, never destined to see street rego – was running and made 650rwhp on the MPW Performance dyno. There was still plenty to do on the car, but we were relieved that it passed scrutineering and was given approval to cruise the streets of Alice. We had a couple of special conditions though, including the need for a passenger at all times to assist driver vision and that the car would have to be always led by a service vehicle. No problem there! 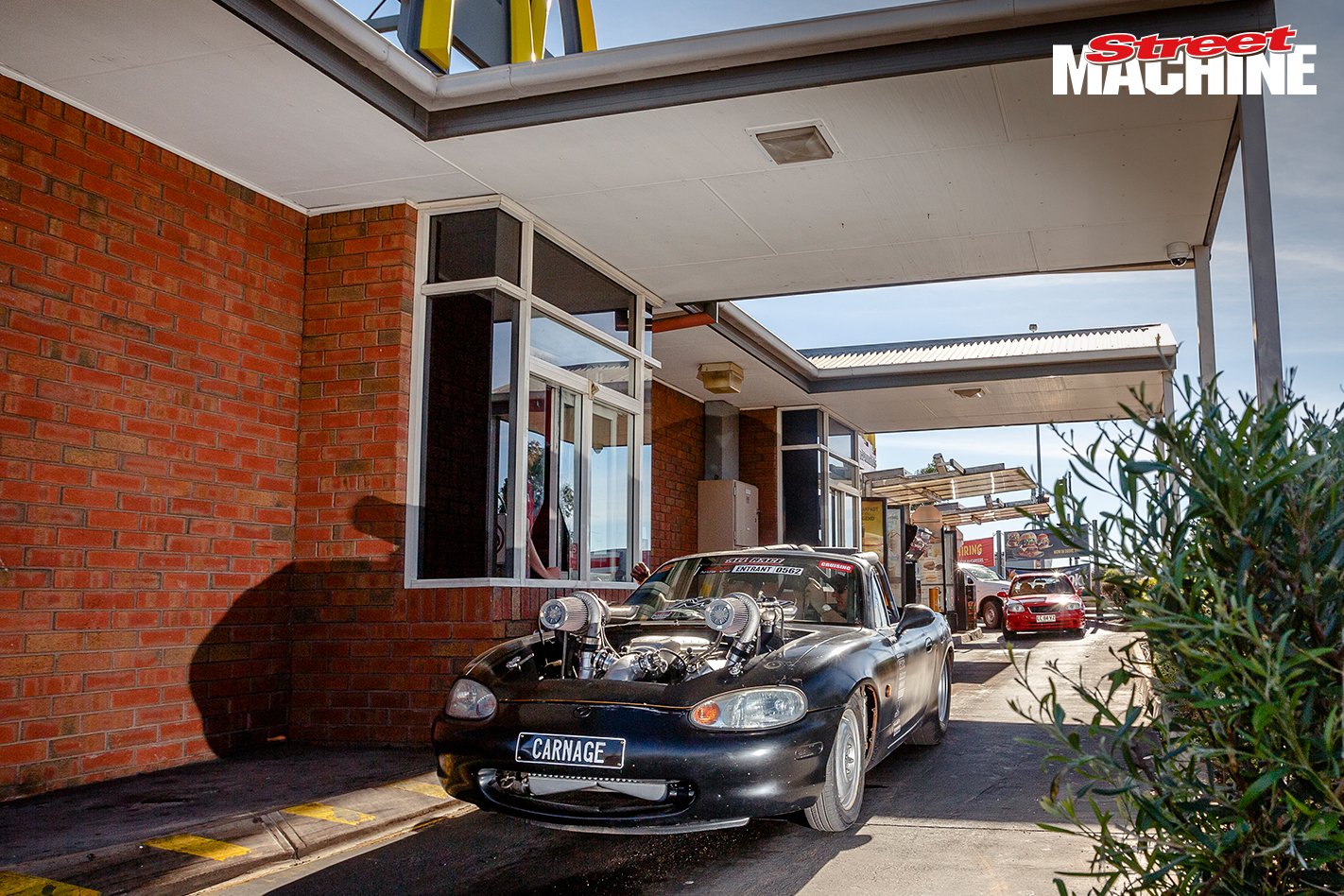 With the formalities done, we rushed to get the car to the marshalling area for the start of the street cruise, when disaster struck in the form of a popped radiator hose, spilling coolant everywhere. A spectator came to our aid with enough water to refill the Aussie Desert Cooler – and spotted the whereabouts of the rogue hose clamp! Scotty quickly had the car buttoned up again and was able to make it to the start of the cruise in time. 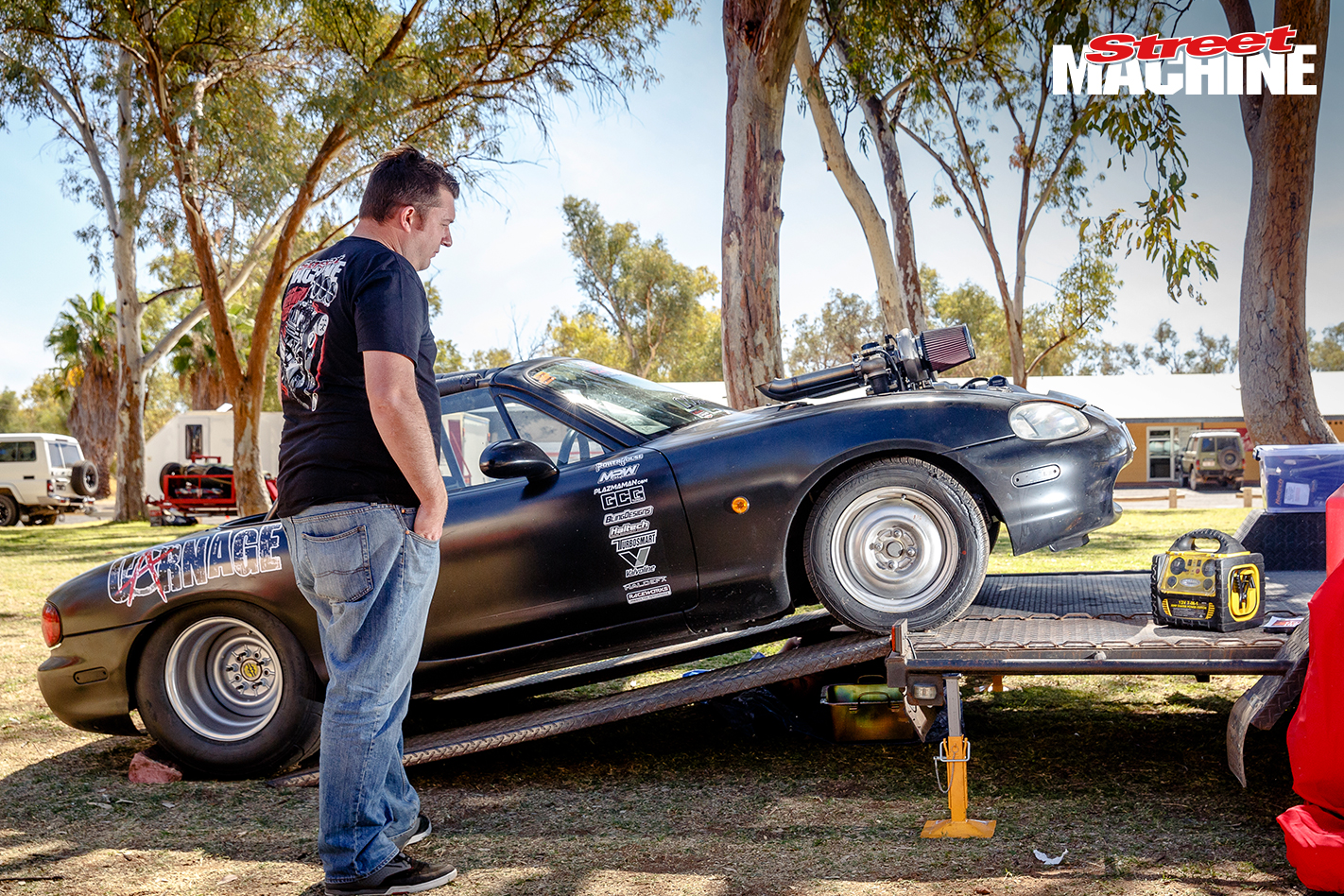 The car – which up until now had driven no further than 200m – performed flawlessly, and was given a rapturous reception by the crowd. While cruising such a wild ride in front of thousands of people with total impunity was a buzz, Scotty is a racer, so the next item on the agenda was to finish off a bunch of little jobs needed to compete in the driving events. This included fitting the tailshaft loop, setting up the transbrake and fitting the rollcage padding. Scotty and SM features editor Andrew Broadley took care of these tasks under the shade of a gum tree at our motel. 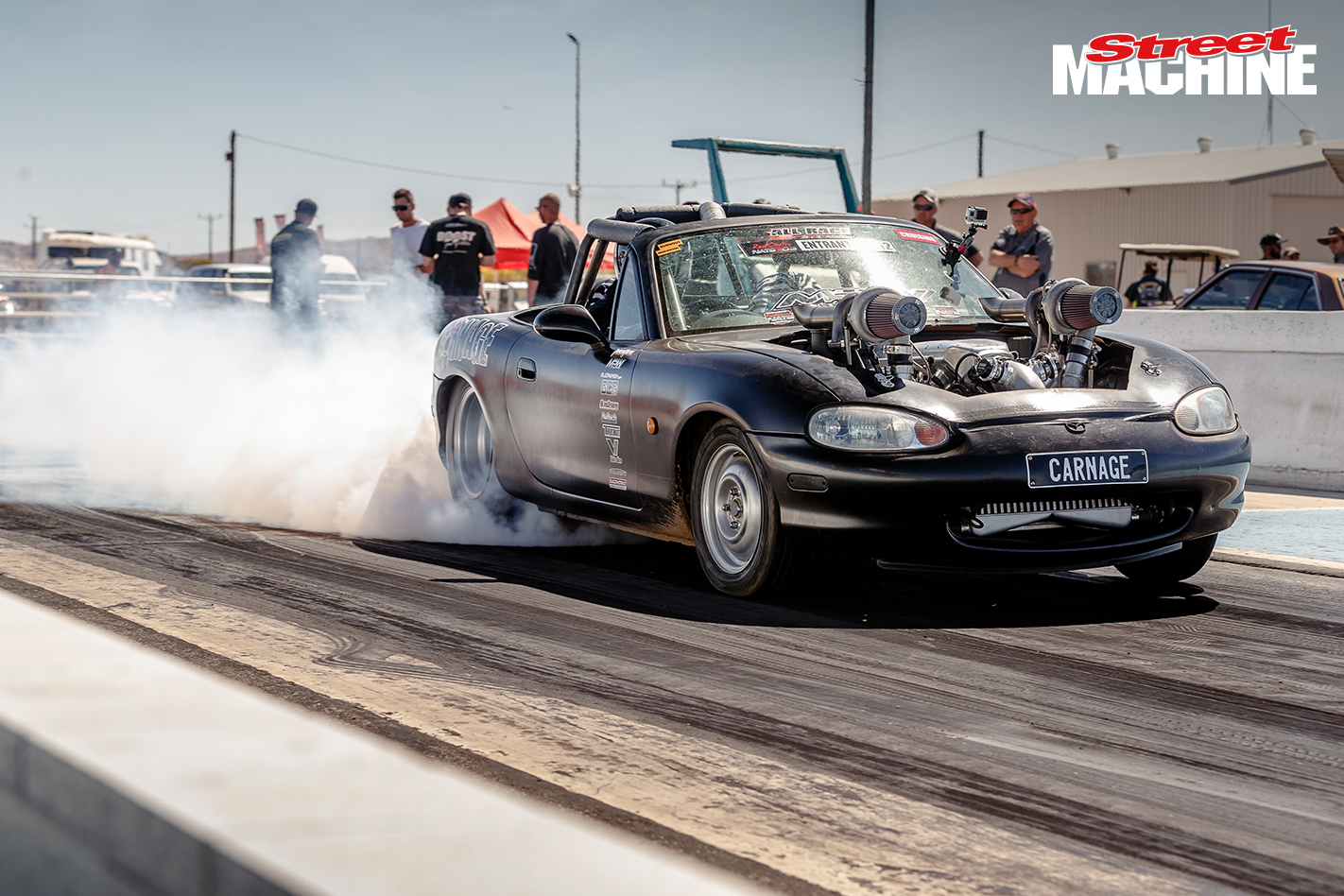 The first event was the motorkhana, and while the officials cast a dubious eye over the MX-5, Scotty reports that the little convertible hasn’t lost all of its sports-car heritage. Despite not seeing the track prior to his run, he recorded a 21-second time, which compares favourably to the 19-second runs the best of the Grand Champion contenders managed.

After the obligatory McDonald’s run, we hit Alice Springs Inland Dragway on Sunday, where Scott ran a string of 11-second passes, getting quicker each time. Trap speeds of up to 135mph show the car has an easy 10-second time in it and that a nine is also within reach. A couple of shredded idler pulleys put an end to our fun, but the MX-5 will be back soon! 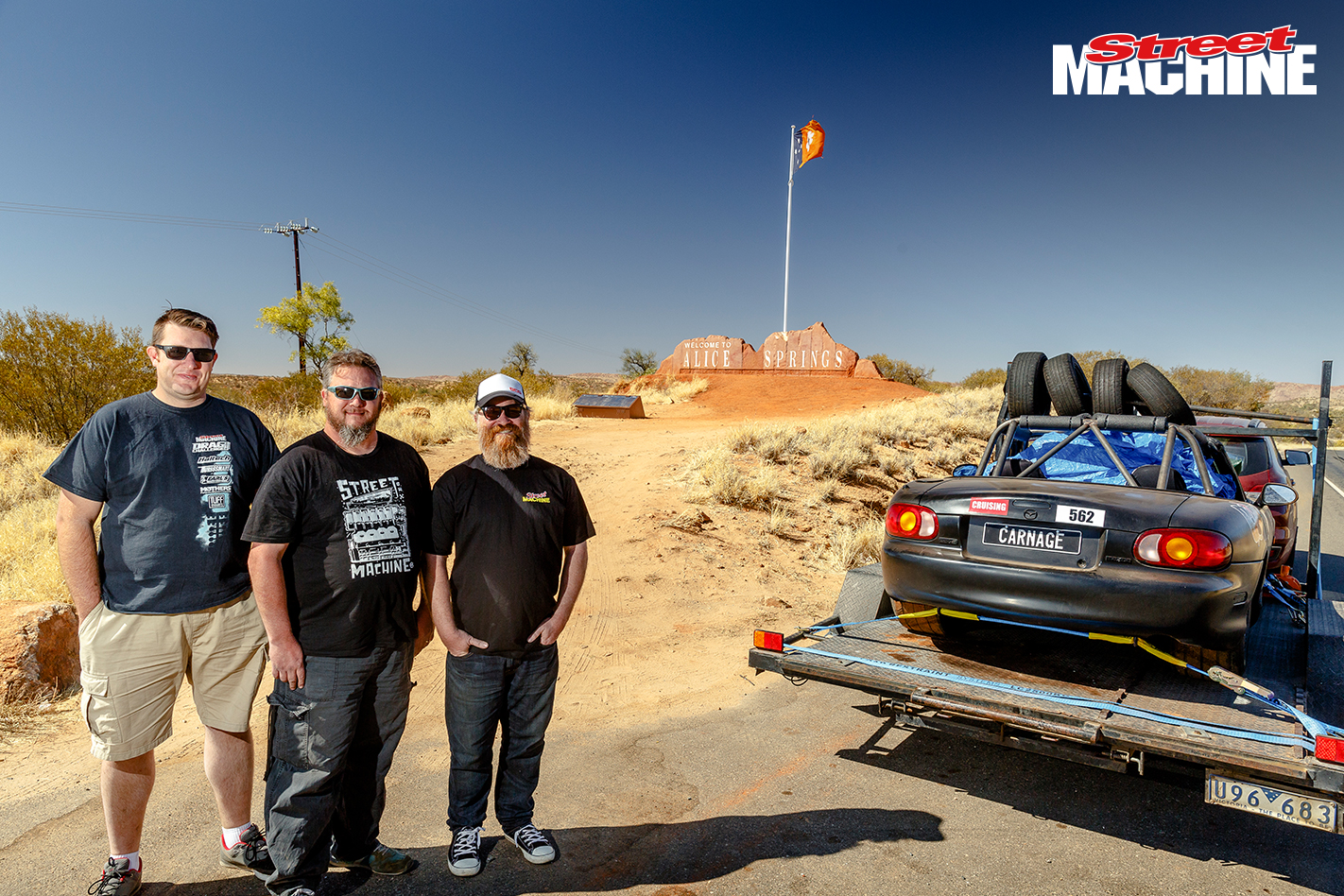