DAVID Murphy is no stranger to fast cars. For years he has been piloting his tough blown and injected small-block Windsor-powered Ford Capri, both on the street and at the strip. But once he went blown, the twin-carbed 432ci SBF sat dormant in the shed for a while – until his new toy, known as Murphy’s Law, arrived. It’s a 1961 Ford Falcon that just oozes nostalgic old-school racer class.

He bought it as roller from a fella in Queensland, and slapped his stout Windsor engine in it along with a two-speed Powerglide and a trusty Ford nine-inch diff up the back. For a little more power, a 300hp direct-port nitrous kit was also fitted.

The recent Lights Out eighth-mile grudge racing at Powercruise Sydney marked Murphy’s Law’s debut, but it wasn’t without incident. 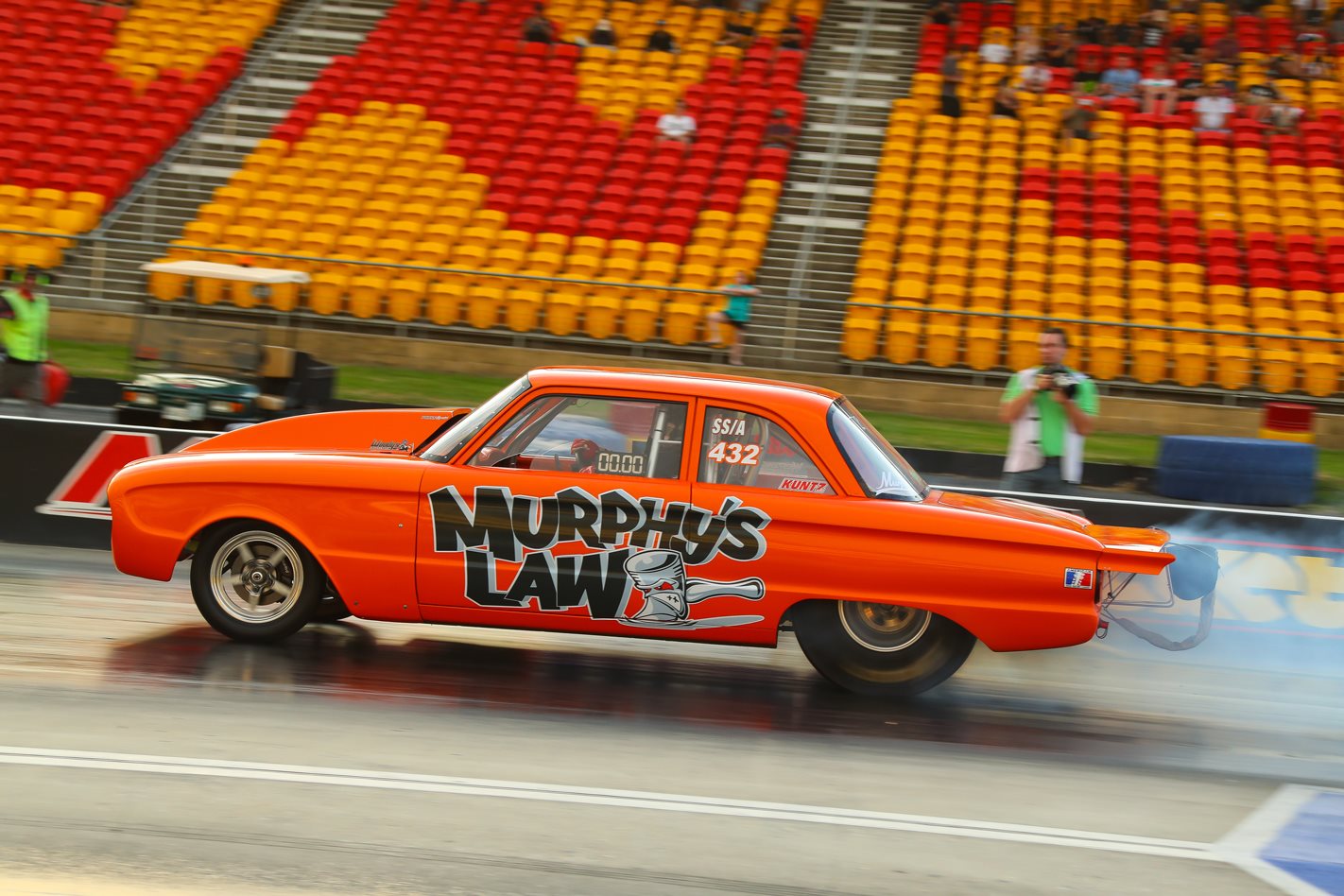 “I did a burnout, then staged the car and was ready to race,” David recalled. “The lights went out and I nailed the throttle, and a few seconds into the run the bloody steering wheel came off!” You can see that particular moment in our video. “I got off the throttle as I struggled to get the wheel back on while veering towards the centreline,” David continued. “Luckily I had a sole pass and only took out a timing marker instead of another racer.” The reason for the mishap was simply that the steering wheel had not been fully clipped into place. Talk about Murphy’s Law! 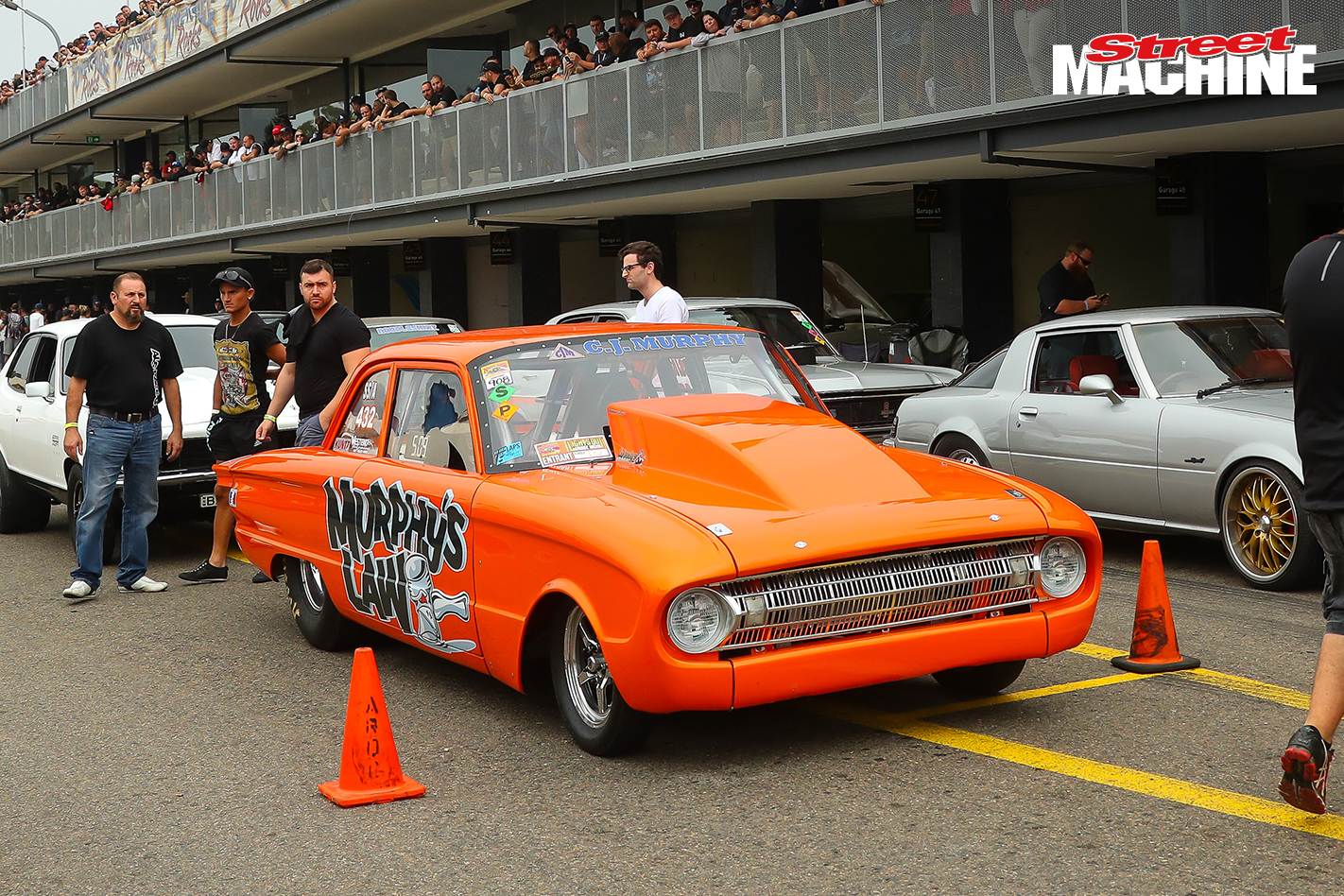 The car then lined up for another run, but was pushed back off the startline with a slight oil leak coming from the oil breather/catch can.

After a few tweaks in the pits the tough Falcon was back for more. This time the steering wheel was definitely fastened correctly – and lucky for David that it was. He launched the car hard and it gripped so well that the front wheels came up a few feet in the air. The whole time he had the throttle pinned all the way and the nitrous ‘go’ button deployed. The result? A wild wheels-up ride!

As the car came back down the headers scraped the tar, resulting in some sparks, but no major damage was done. 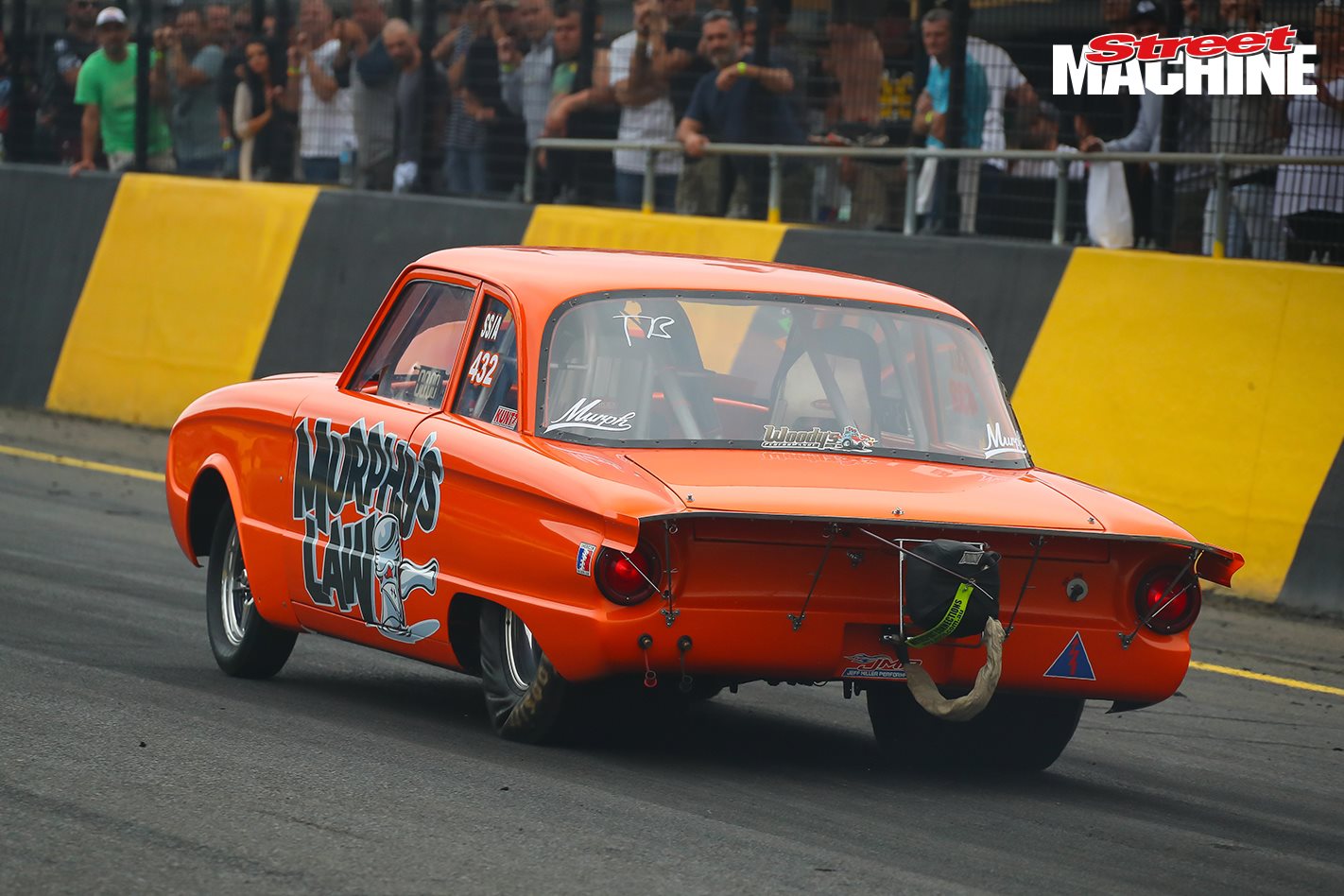 “That last pass was wild; the front end came up and just kept going up and up, so I just held on for the ride, not realising my thumb was still on the nitrous!” David joked. “It was one hell of an adrenaline rush, that’s for sure.”

David plans to race Murphy’s Law regularly and is aiming to run in the 8.50sec zone naturally aspirated over the quarter, and with the nitrous on board, around 7.90s.