THERE have been plenty of cool new events for Pro Street-style cars popping up across the country over the past 12 months, and the latest is Grudge Kings, dreamed up by Sydney racer Po Tung. Po ran his first event at Sydney Dragway in late July, attracting over 100 heavy-hitters – and good crowds despite the cold weather. 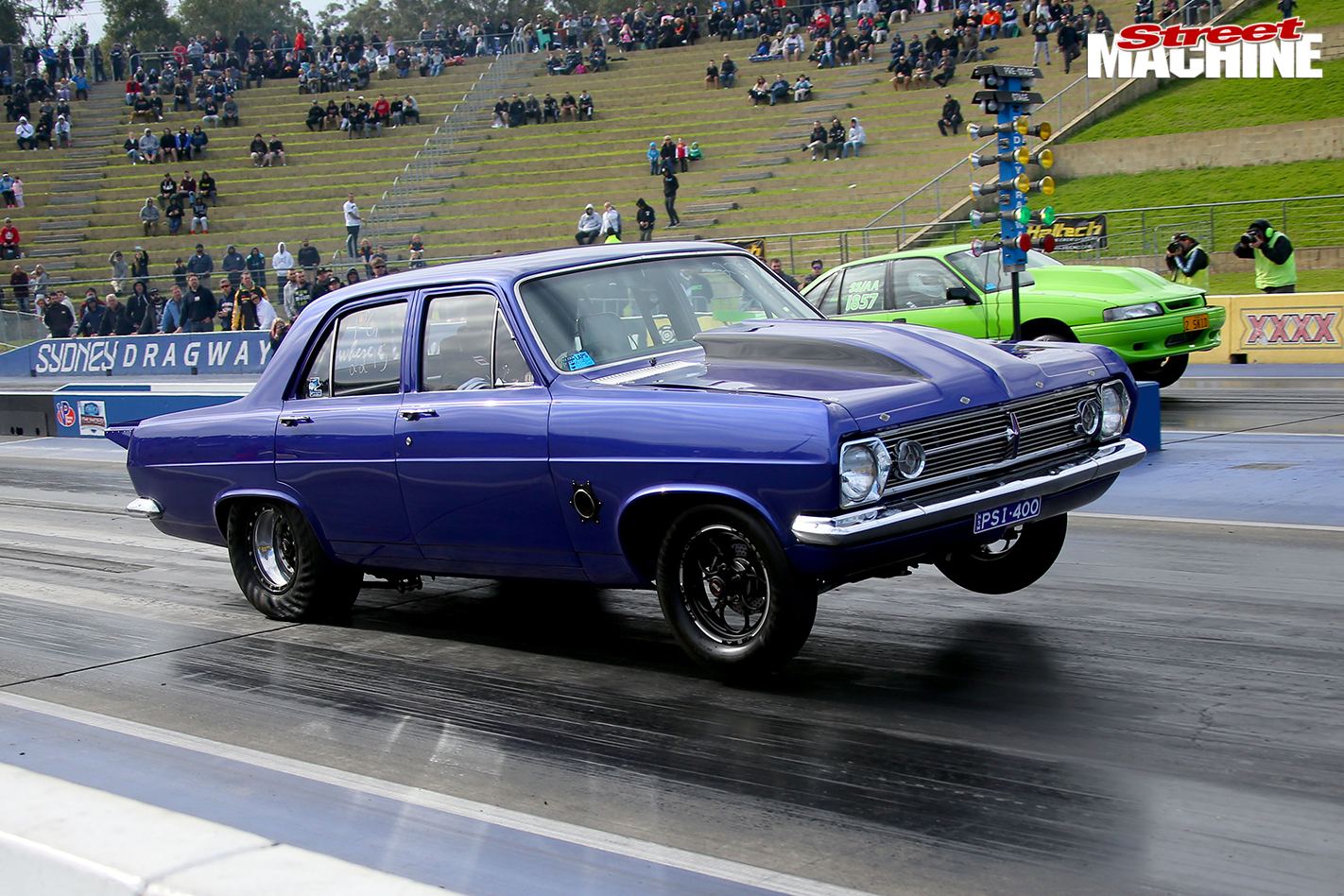 As the name suggests, the bulk of the racing was done in ‘call-out’ style, with cars racing over a quarter-mile for the pure hell of it – no finals or overall winners. The grudge element of the event was divided into the Grudge Kings, for any car with swinging doors and slick tyres, and Street Outlaws, for street cars that were driven to the track and racing on street rubber. 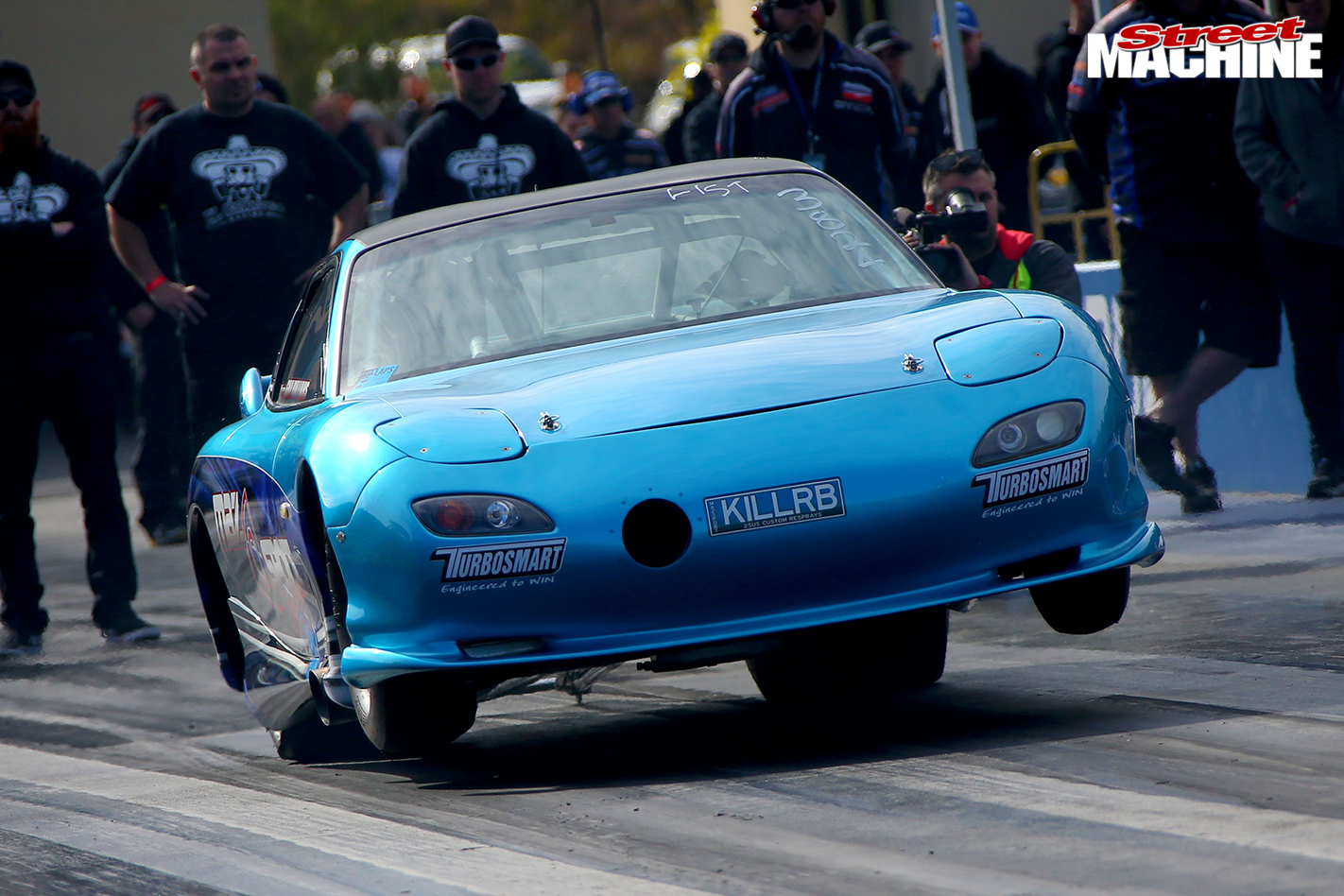 Headlining the event though was The List, loosely modelled on the Street Outlaws TV show. To be eligible for The List, cars were limited to a three-quarter chassis, with factory steel bodies and retaining factory appearance. Other than that, you could bring what you liked! Over 30 cars signed up to have a go at The List, racing over an eighth-mile distance. The racers were then put through a punishing three-round format. To win, a racer had to win all three rounds, with the overall winner determined by the best elapsed times in the third round. The final Top 20 list was likewise determined by that final-round ET. Now that the initial list has been established, future events will be run purely on a heads-up basis, with first past the post winning.

“The original aim was to find the fastest 20 street-style cars in Sydney,” Po said. “But it grew into a monster!” 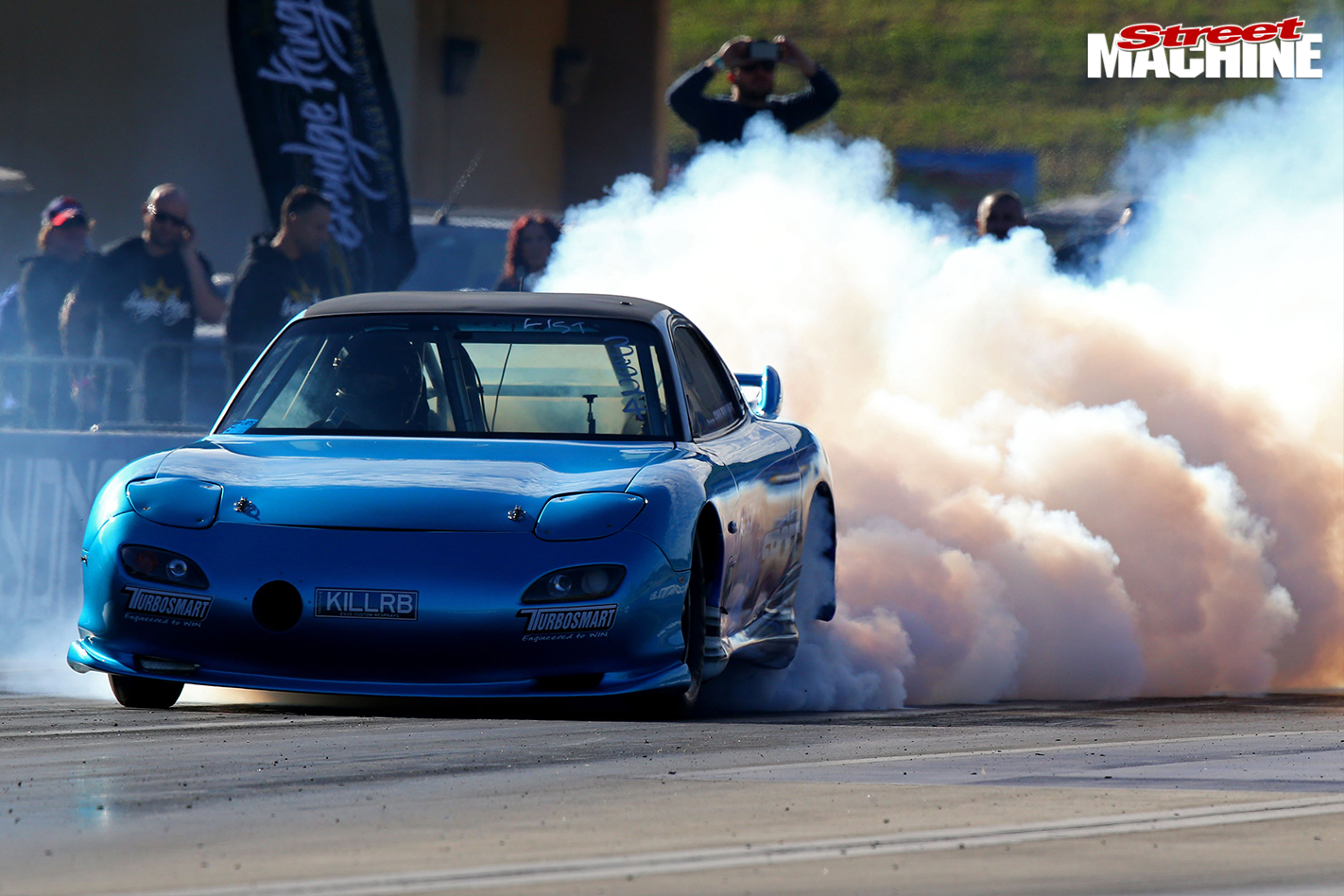 The top spot on The List was claimed by expat Kiwi Gina Bullians, who has been racing since she was 16 years old. After meeting her partner – Bill Nabhan of Mazsport fame – Gina converted to chook-cookers: “My first rotor was an 808 wagon that had a 13B turbo built by Bill and it ran 9.80@134mph,” she said.

In 2012, the pair had a chance to buy back Bill’s old KILRB RX-7, so they quickly snapped it up and transformed it back into a serious race car. These days it runs a 20B with a 98mm Precision turbo pumping 40psi, swapping gears with a Liberty five-speed. That lot has so far been good enough for a best of 6.91@197mph.

Gina had a rough lead-up to the Grudge Kings meeting: “The bonnet pins failed at speed and it crashed up onto the windscreen and roof,” she explained. “We had to fix it overnight and pulled a heap of favours to get it back on track looking as though nothing happened.” 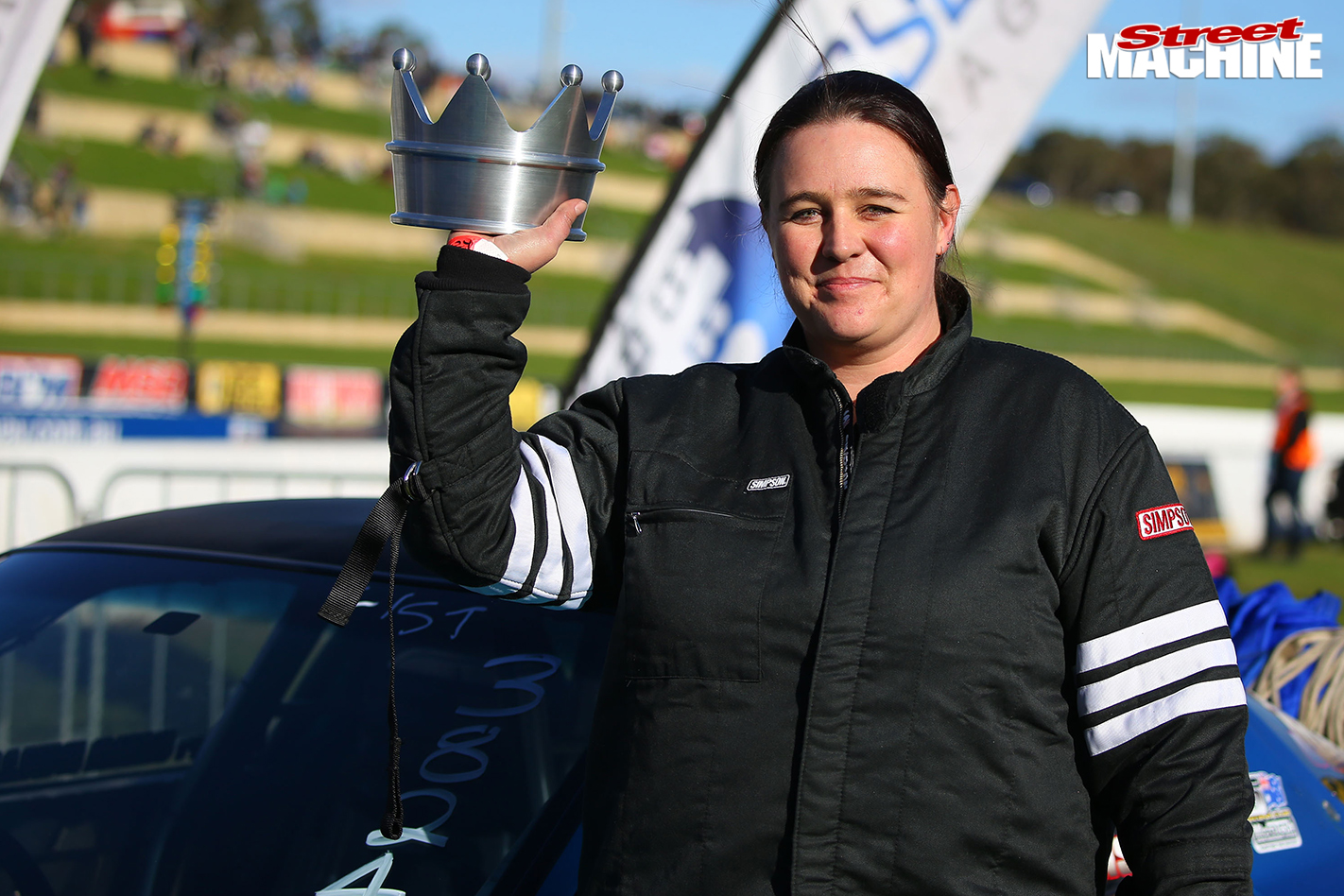 Despite the scare, Gina won all three rounds and ran a 4.62@159mph pass to put her at the top of the list, claiming the $1000 prize money and ownership of the billet Grudge Kings crown – for now!

“I couldn’t believe that I had won the crown and taken out the number one spot,” she said. “The racing was awesome and so too was the atmosphere on the track and in the pits. I’ll definitely be back again to defend my crown.” 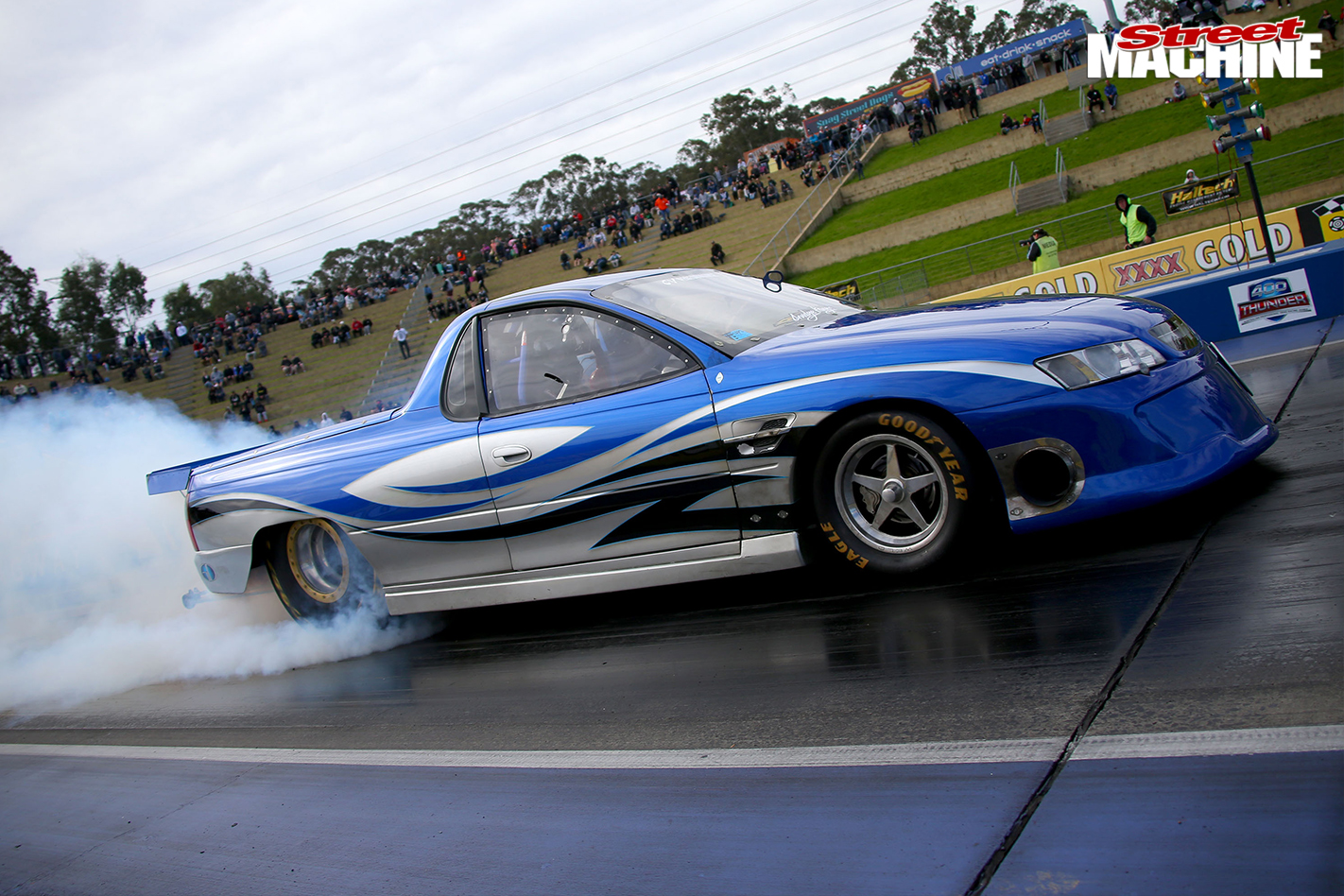 Gerry Sarafoglou set a new Australian record for LS-based motors at the event, running a 6.85@202mph pass in his ute. The beast packs a 2500hp 427ci CV Performance mill with a 114mm snail hanging off it 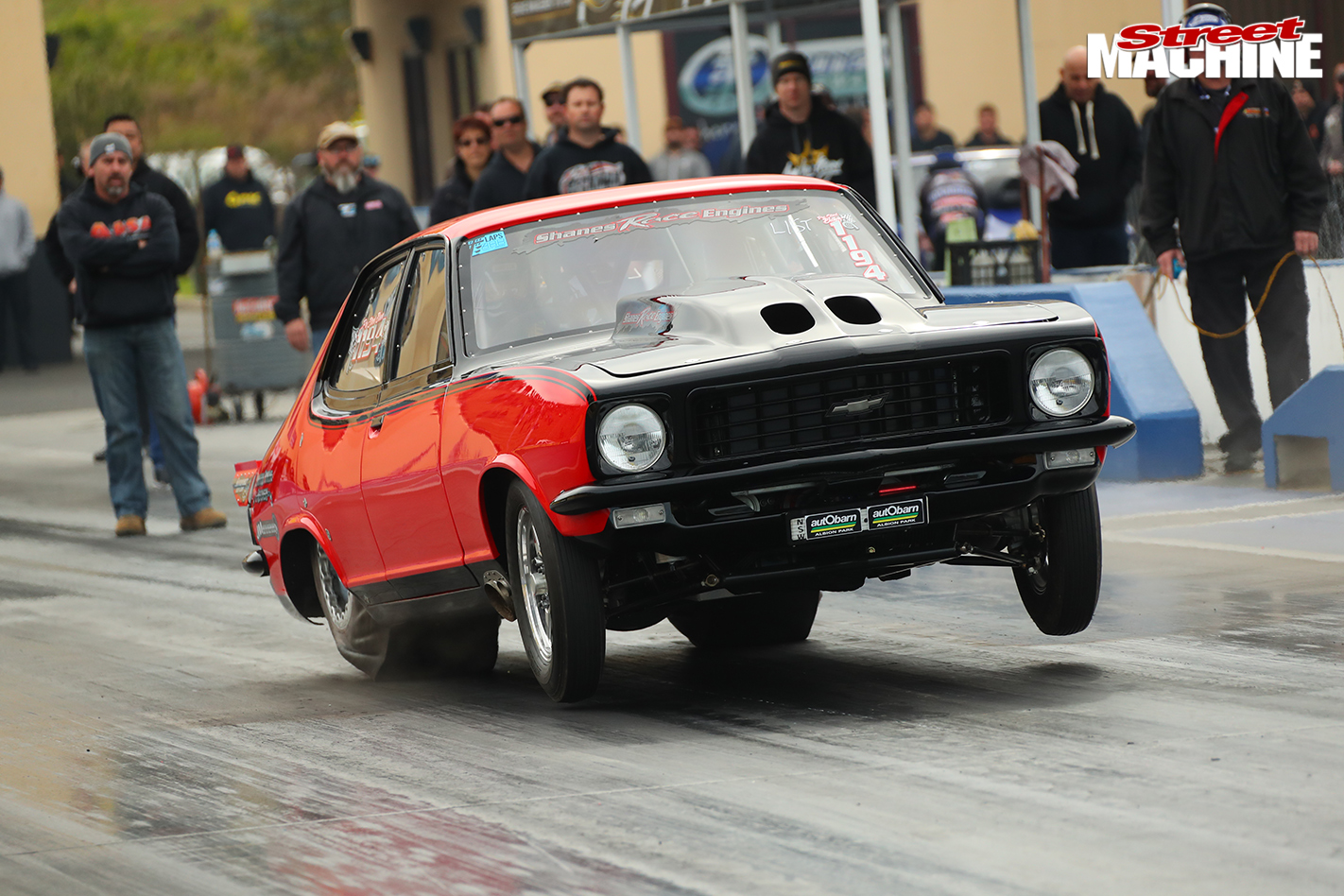 Tomi Raikko won the Wildest Ride award in his LC Torana sedan. The home-brewed weapon ran a best of 7.00@203mph, thanks to a 400ci SBC wearing twin 80mm BorgWarner turbos 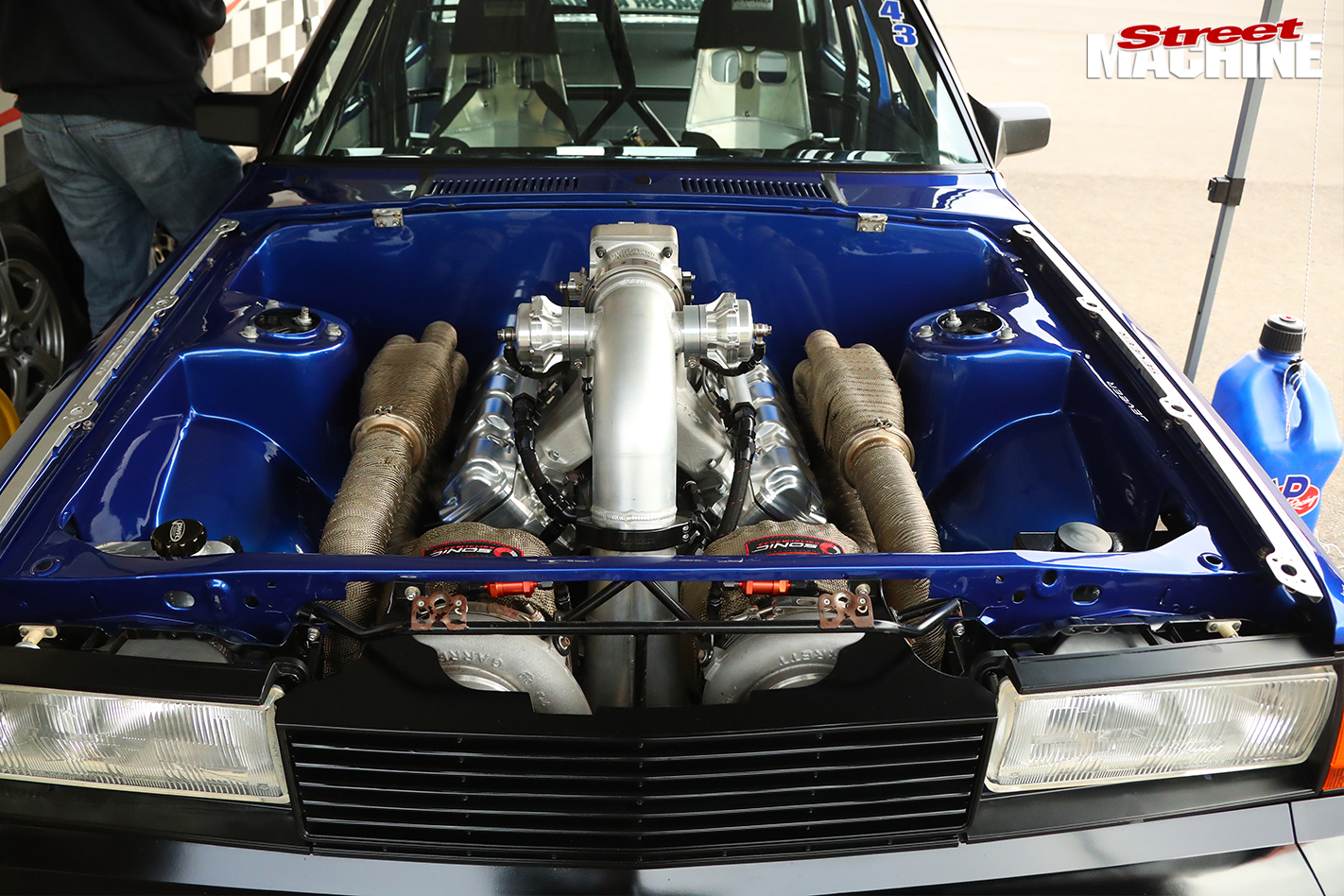 Another great home-built car is Matt McCarthy’s Nissan Bluebird, all the way from Brisbane. Again running a twin-turbo SBC (who said the small-block was dead?), Matt’s Bluebird broke into the six-second zone for the first time with a 6.96@206mph. The little radial car can be a handful, but Matt is hoping to get down into the 6.70s 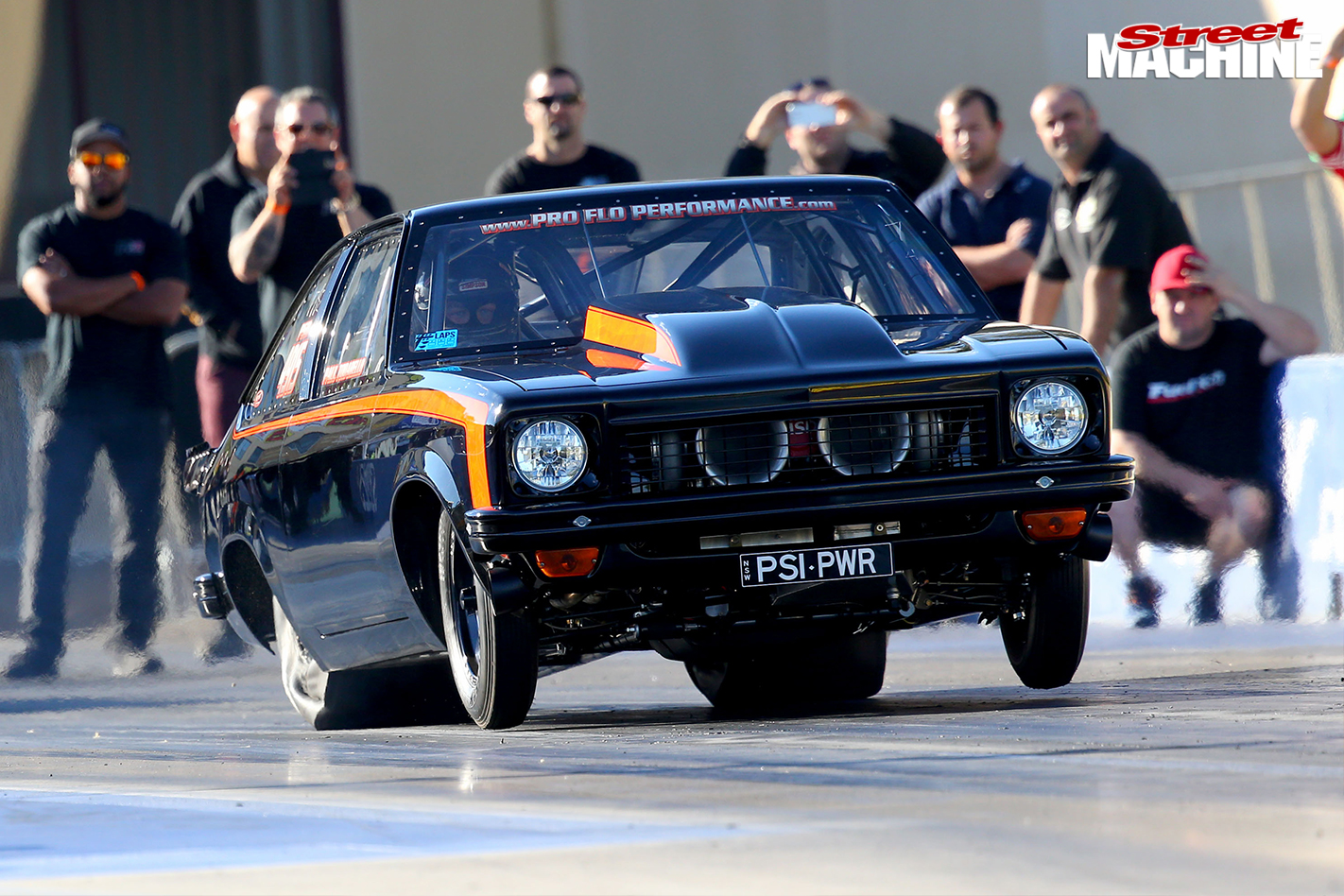 It has been a while since Paul Todarello’s LX Torana hatch was on the cover of Street Machine (July 2014), but at Grudge Kings it exceeded everyone’s expectations by running a 6.9sec pass off the trailer and then running a 6.51@ 224mph! Not everything went to plan though, with the bonnet parting ways with the car over the finish line, giving driver Paul Mouhayet a bit of a surprise 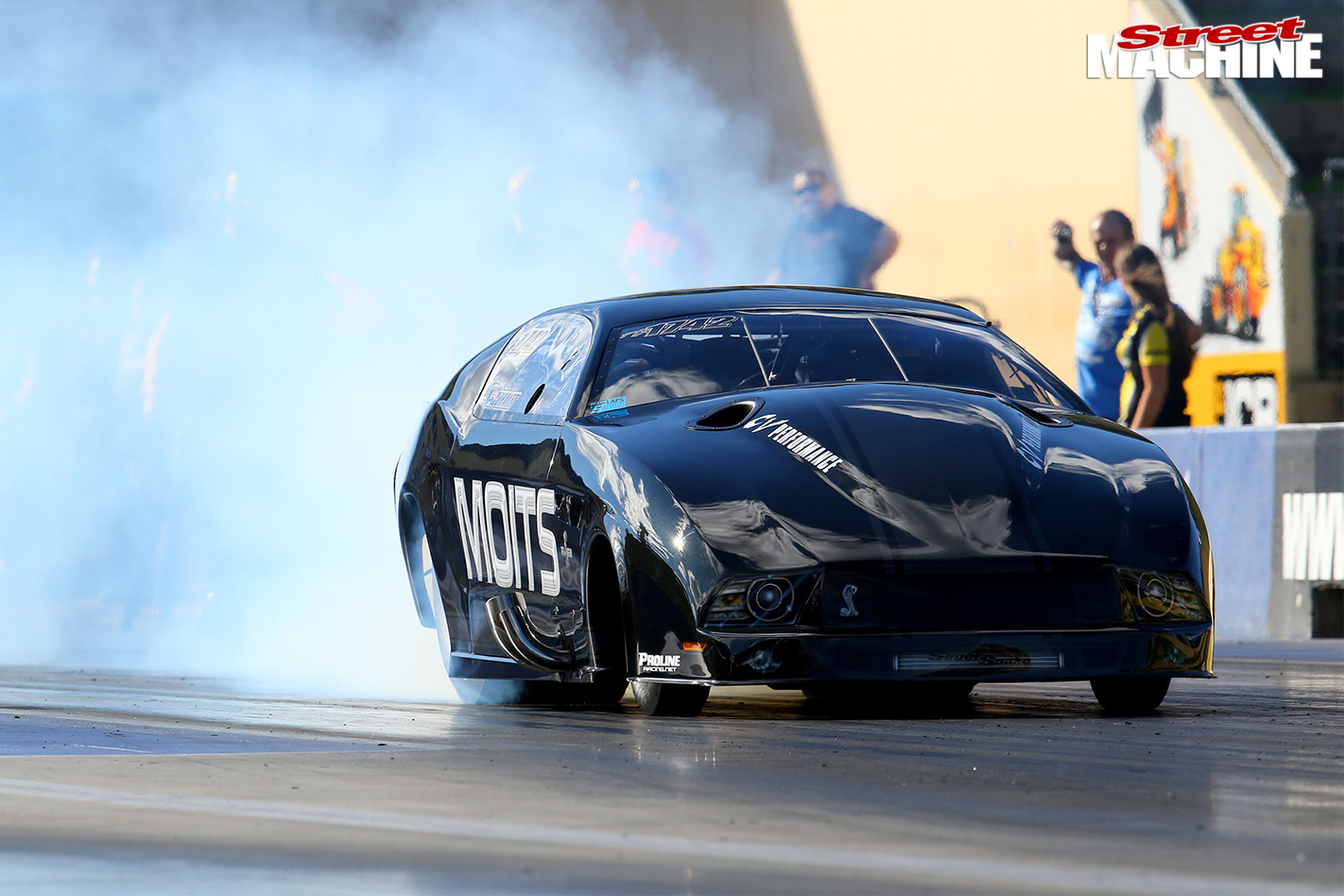 Paul Mouhayet and the Moits team had a week of up and downs, debuting their black Mustang on Aussie soil, becoming the quickest and fastest sedan in the country. Come race day though, the car turned right suddenly at speed, hitting the wall at 261mph. Thankfully, Paul wasn’t seriously injured and the car is said to be repairable 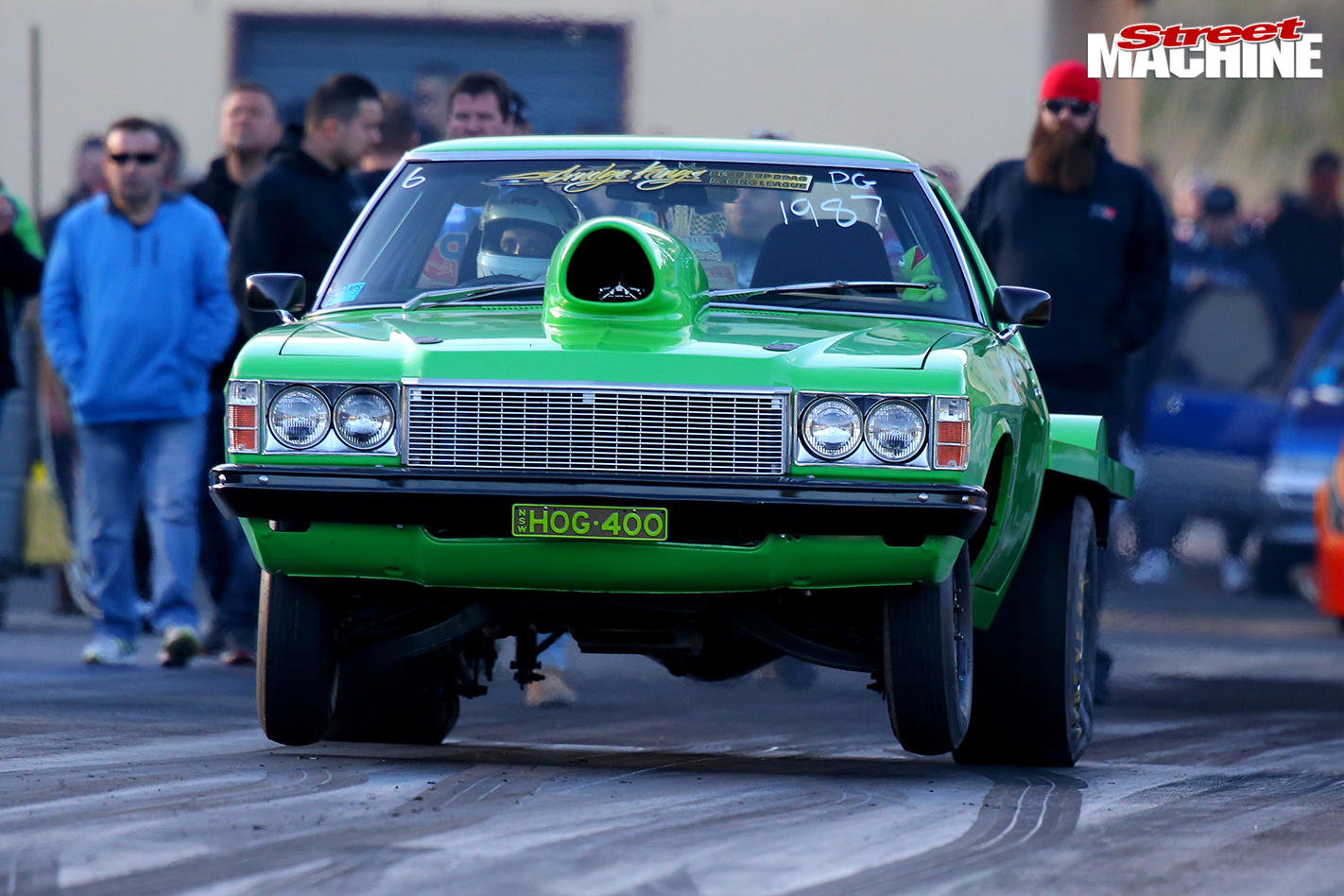 Drag Challenge veteran Adam Lynch put his small block-powered tonner on the bottle for the first time and was rewarded with a new PB of 9.21 seconds at 145mph 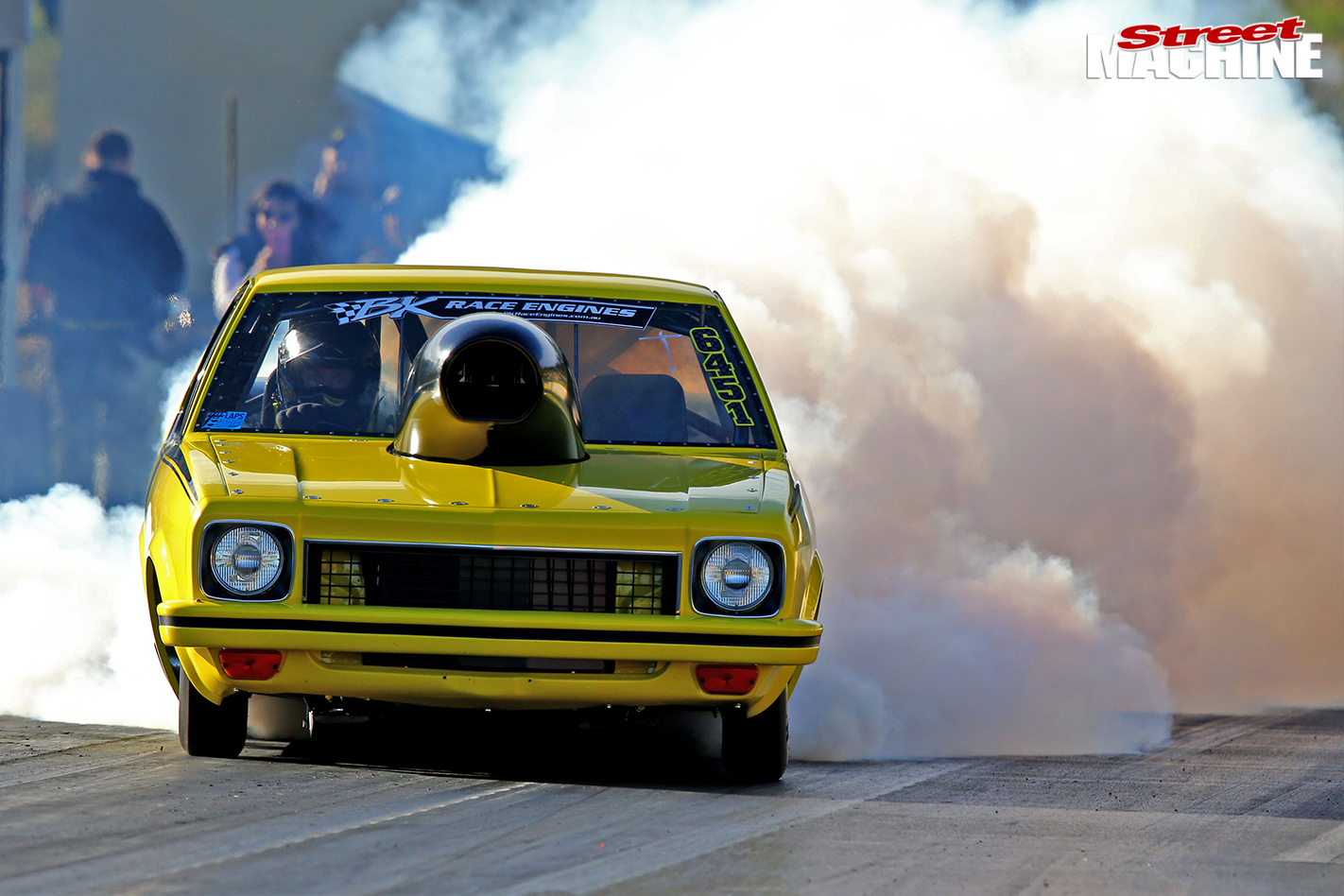 David Hellyer had his show-quality KIL308 Torana out and running for the first time and ripped off a healthy 7.57-second pass at 178mph with more to come 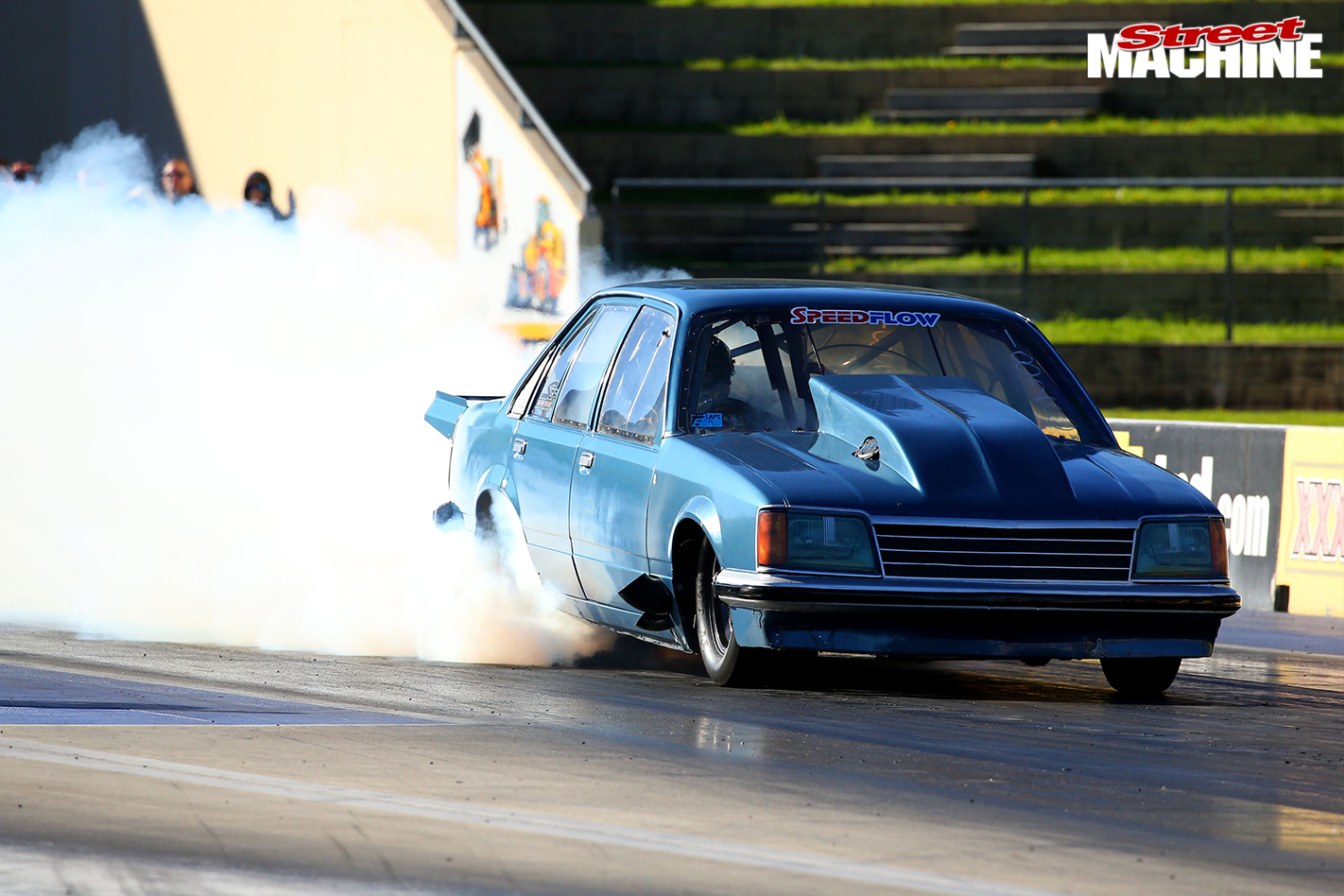 Jeremy Martin’s VB Commodore got people talking. Running a 540c twin turbo Pro Line Racing set up, the 2750lb beast showed some serious form with a 6.13-second pass at 234mph. Can a five be far away? 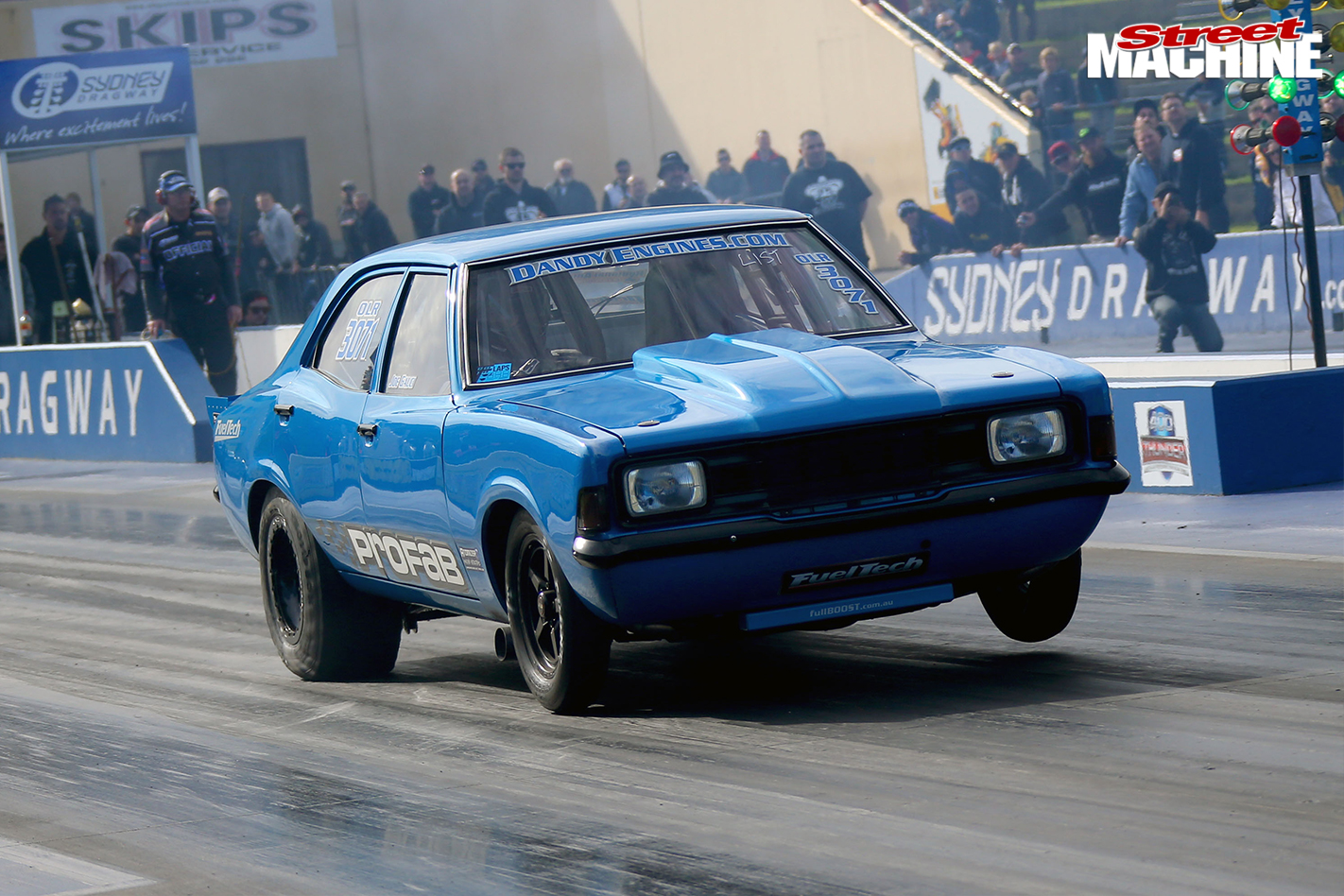 Another racer to run his first six was Joe Gauci in his all-conquering radial Cortina. Now running a 380ci SBF combo with twin 88mm Garrett turbos, the car ran a wheels-up 6.97@212mph 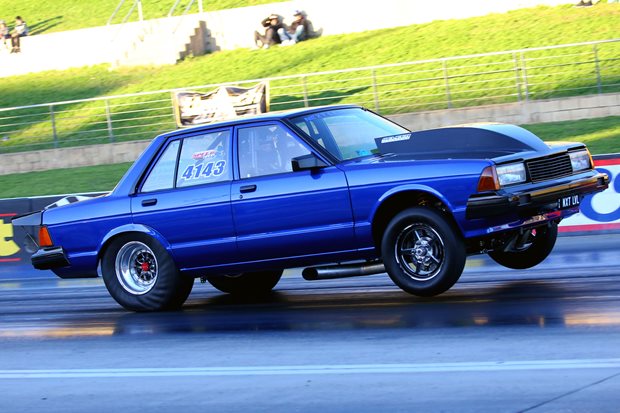 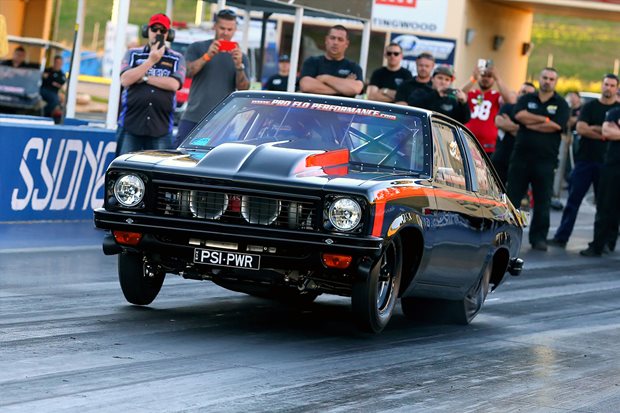 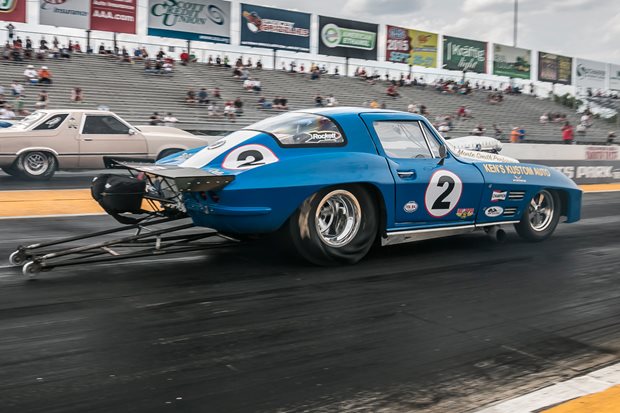