REGULAR Street Machine readers will be familiar with this ’72 Ford Capri known as RO4RY, owned by Sydney racer Tristan ‘Tricky’ Triccas. The little weapon has run over 300km/h at the Temora 1000 and kicked butt in normally aspirated form at the first two Street Machine Drag Challenge events.

So far, the little Ford has hammered out a best of 8.51@161mph down the quarter-mile, but there is much more to come.

The owner-built 440ci Windsor now features a 500hp Wilson direct-port nitrous system, though Tricky has only used a 300hp shot so far. Now armed with around 1400hp, he’s now hoping to run a 7.9sec quarter, despite the car weighing in at 3400lb.

At the recent Lights Out grudge racing at Powercruise Sydney, the Capri ran a best of 5.5sec over the eighth-mile, which eased Tricky’s concerns over how the engine would perform. 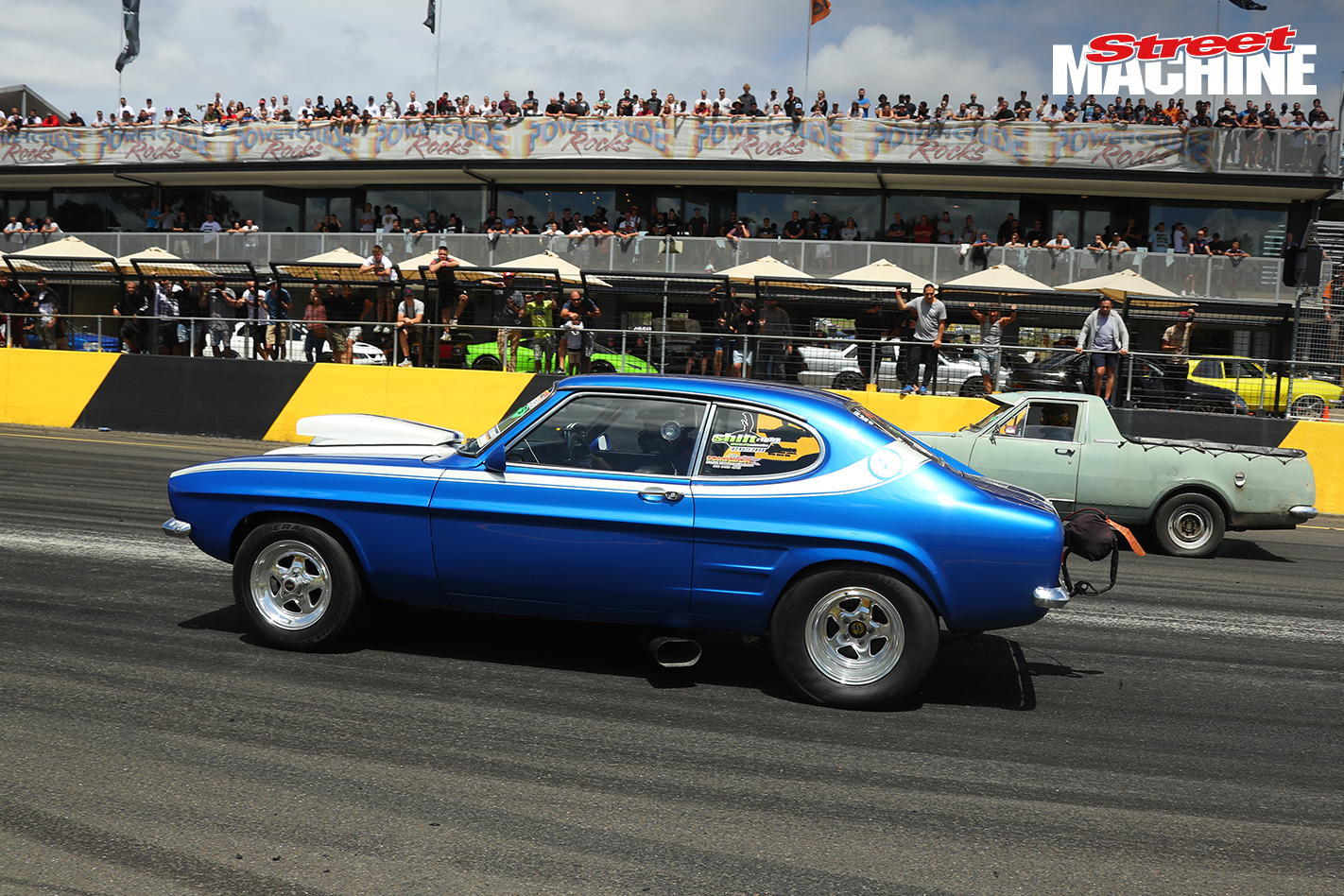 “This is my first nitrous engine and once I got it into the car I thought: ‘Where the hell is the power?’ It was like driving a tractor!” He’s since got the tune sorted, and the little Windsor is screaming.

Tricky has swapped the transmission from a Ford C4 to a two-speed Powerglide built by Protrans. Why? “Because the C4 couldn’t handle 1400hp!” Tricky says. On the other end of the Capri’s new 3in ’moly driveshaft is a custom-made Ford nine-inch built by Con from Pro Street Metalcraft. Con also fitted chassis connectors along with leaf springs and Menscer shocks.

Despite its ballistic straight-line performance, Tristan says he’s tried to make the Capri as street-friendly as possible. For starters, the cabin was renovated to make it more comfortable for frequent street driving. “All the interior has been lined with Dynamat,” Tricky says. This has blocked much of the engine and driveline noise, making long cruises much more bearable, and he’s also added air conditioning for those hot summer days and nights.

For street duties, the Capri is happy on pump 98 fuel, but when the nitrous comes on at the track, he switches to VP NO2 fuel.

“I love spending time cruising with the family, especially my son Ezekiel – he won’t let me leave the house without him,” Tricky says. In fact, it was Ezekiel who named the car, after the Roary The Racing Car kids’ cartoon series.

“My aim is to have the fastest street-driven car,” Tricky says. “I would like to run sevens on radials in the very near future – with the air conditioning on! And it will be fun beating the big Nissan GT-Rs on unprepped tracks in this thing.”