In the seven years that Mick Watt has owned his Ford Cortina, he’s been through several motors and flogged the hell out of the bodywork with plenty of dragstrip passes and high-rpm, tyre-flaying burnouts

OUT OF destruction and chaos some things are often born anew. To create, sometimes you have to destroy. Old houses get torn down to build new ones, and when old cars or engines die, it gives people a chance to build something fresh and new.

Mick Watt didn’t kill his ’75 TD Cortina, but he gave it a good shot. In the seven years that he’s owned it, he’s been through several motors and flogged the hell out of the bodywork with plenty of dragstrip passes and high-rpm, tyre-flaying burnouts.

“The Corty was okay when I bought it,” Mick says, “It had a 347 and was fully engineered.”

The car came from Queensland wrapped in basic green with a beige vinyl roof, but Mick had been watching the car for some time and pounced when it came up for sale. 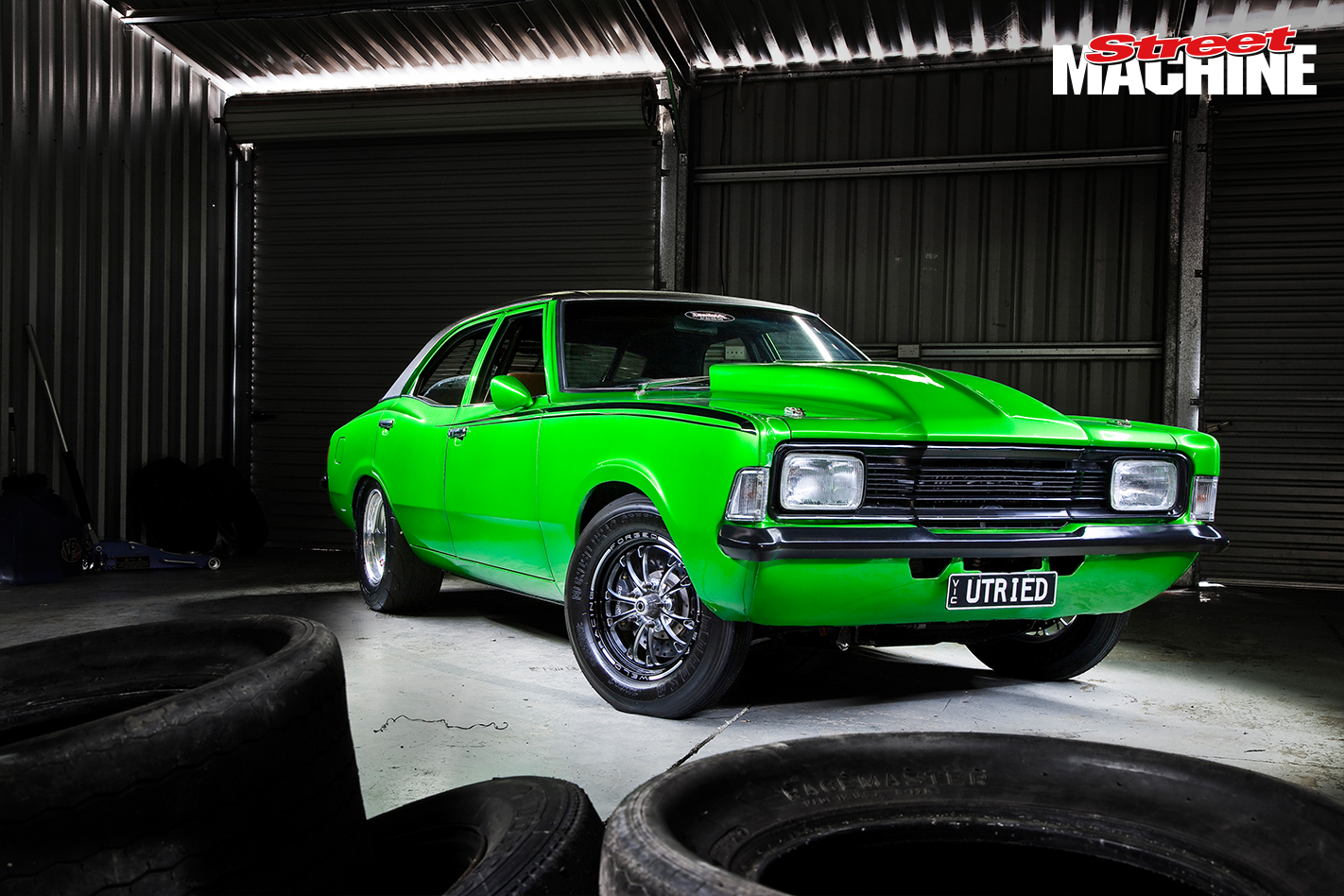 “I just rang the bloke and said, ‘I’ll put the money in your account and send a truck around to pick it up.’ The bloke thought it was a scam, because I didn’t even want to look at the car, but I was working in Western Australia at the time and I knew the car pretty well.”

As it sat, the Cortina was a pretty stout combo. When Mick finally had a chance to get behind the wheel at Calder it ripped off an easy 10.8, which dropped to a 10.67 at 129mph once he changed a few things.

“We picked up a tenth straight away with an SCF swaybar,” Mick reckons. Somewhere in there he also found time to give the car a quick respray and a new vinyl top to keep it looking schmick.

Mick was happy enough to race and cruise it when he had spare time from his day job of driving big shovels in the mines, but disaster struck at Performance Car Mania at Winton a few years back when the 347 dropped a valve and trashed the motor. 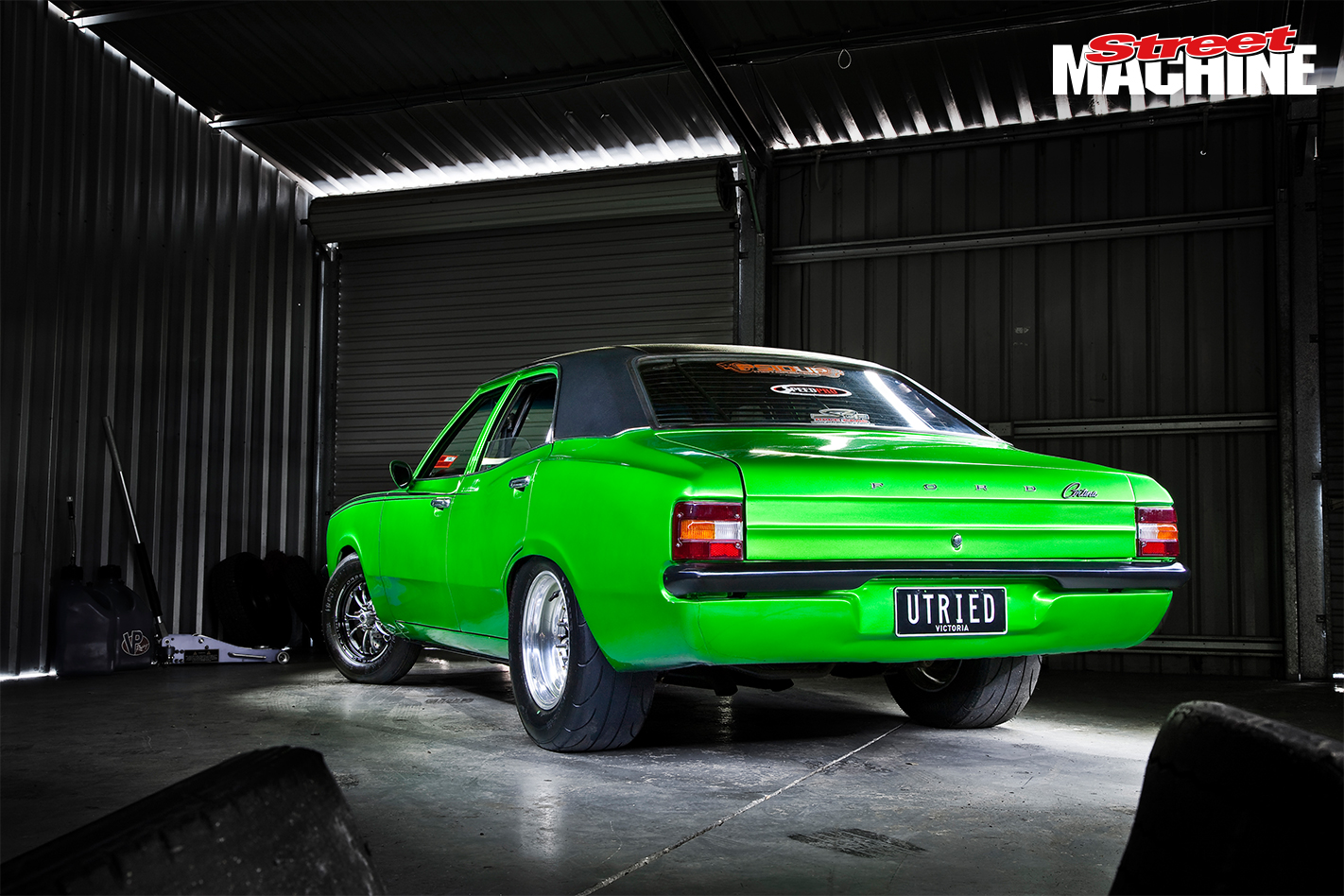 The news wasn’t all bad. Mick’s had a stack of cars over the years including GTR and SL/R Toranas, Madzas and GT Falcons, and he had a 289 cuber left over from an earlier XT Falcon project. Despite the small cubes, the 289 Windsor was a great little engine that made 333rwhp and Mick used to spin it to 9000rpm on the burnout pad. Maybe there’s a lesson there for the bigger-is-better crowd.

“I was trying to keep up with the blown guys,” Mick says, “but it ended up splitting a bore cruising at Summernats. I parked it up at Tuff Street and when I came back it had a cylinder full of water. We pumped the water out and drove it back to the hotel.”

At this point, the Corty was starting to look a bit sad and sorry. The constant punishment from burnouts, with a bit of pinball action off the concrete walls, was starting to show, and Mick decided it was time to freshen it up.

Now working in the mines might be good for cash in the pocket, but it’s not the best for building cars. It’s hard to manage a build when you’re thousands of miles away. Fortunately, Mick’s good mate Daniel Nunziante – aka Pazzo – was there to lend a hand. 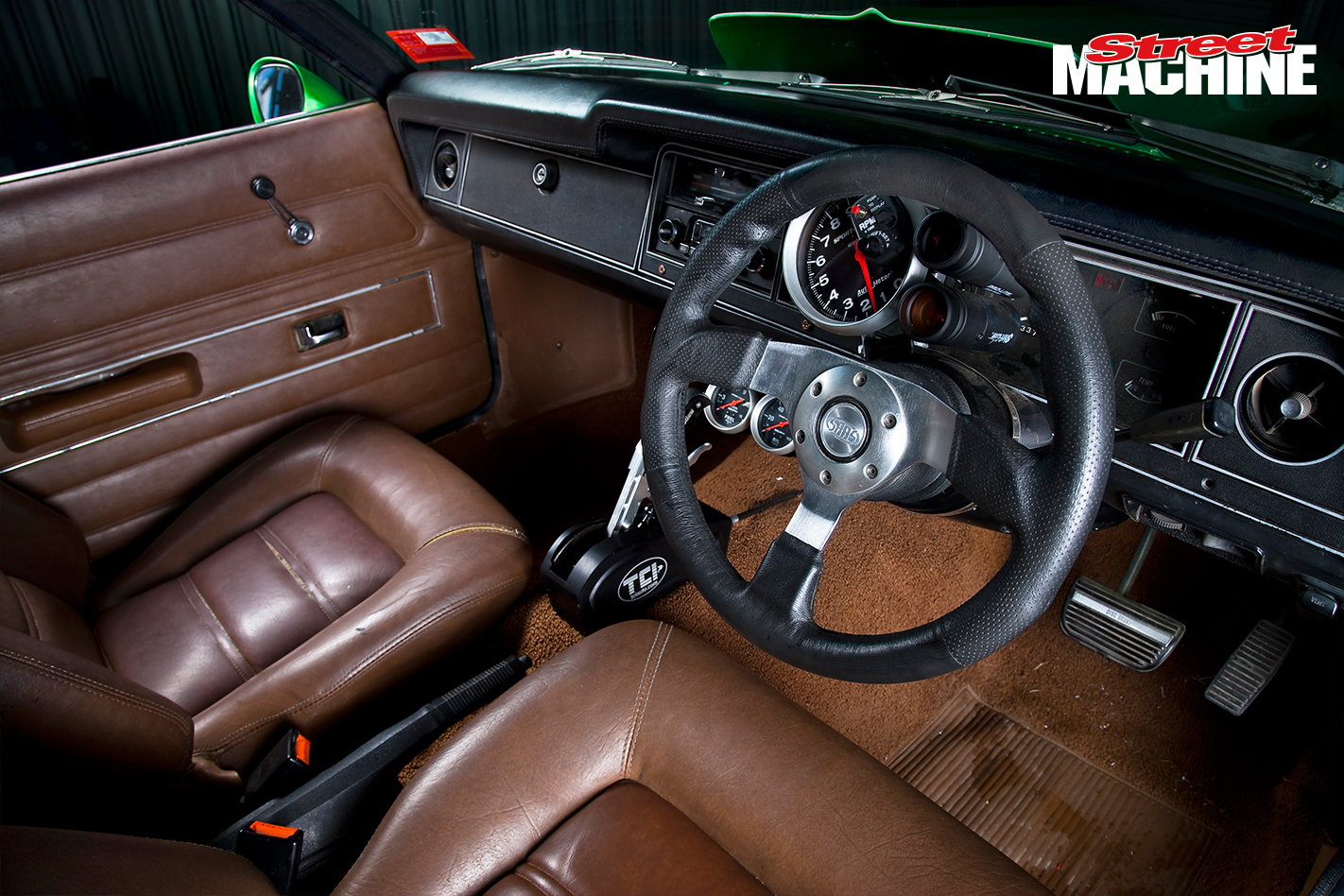 “I couldn’t have done it without him,” Mick says. “Pazzo virtually built the car for me.”

To fix the body, they dumped the compact Ford outside Mike’s Auto Body Repairs in Bairnsdale where Mick’s mate Mike DiPalma took pity on it. Beating out the dents and cutting out a small amount of rust, Mike and his crew had the body smoothed out and painted in record time. The chosen hue looks similar to the Poison Ivy metallic found on VE Commodores but, when you see them side by side, the candy green paint on Mick’s Cortina looks much brighter and more vibrant.

To power the freshly resprayed beast, Mick considered going for a blown LS2 for half a minute before Pazzo convinced him to keep it all Ford and build another tough small-block.

Glenn Wells at Wells Race Engines in Narrewarren was given the nod and he’s certainly delivered. Starting with a new 8.2in Dart block, Glenn filled it with the right goodies to end up with 369 cubes. With a Comp Cams roller, AFR 225cc heads and a Super Victor intake, the combo punches out 648 horses at 7500rpm. Pretty stout for a little Cortina and it even runs on premium unleaded, making it much more street friendly. 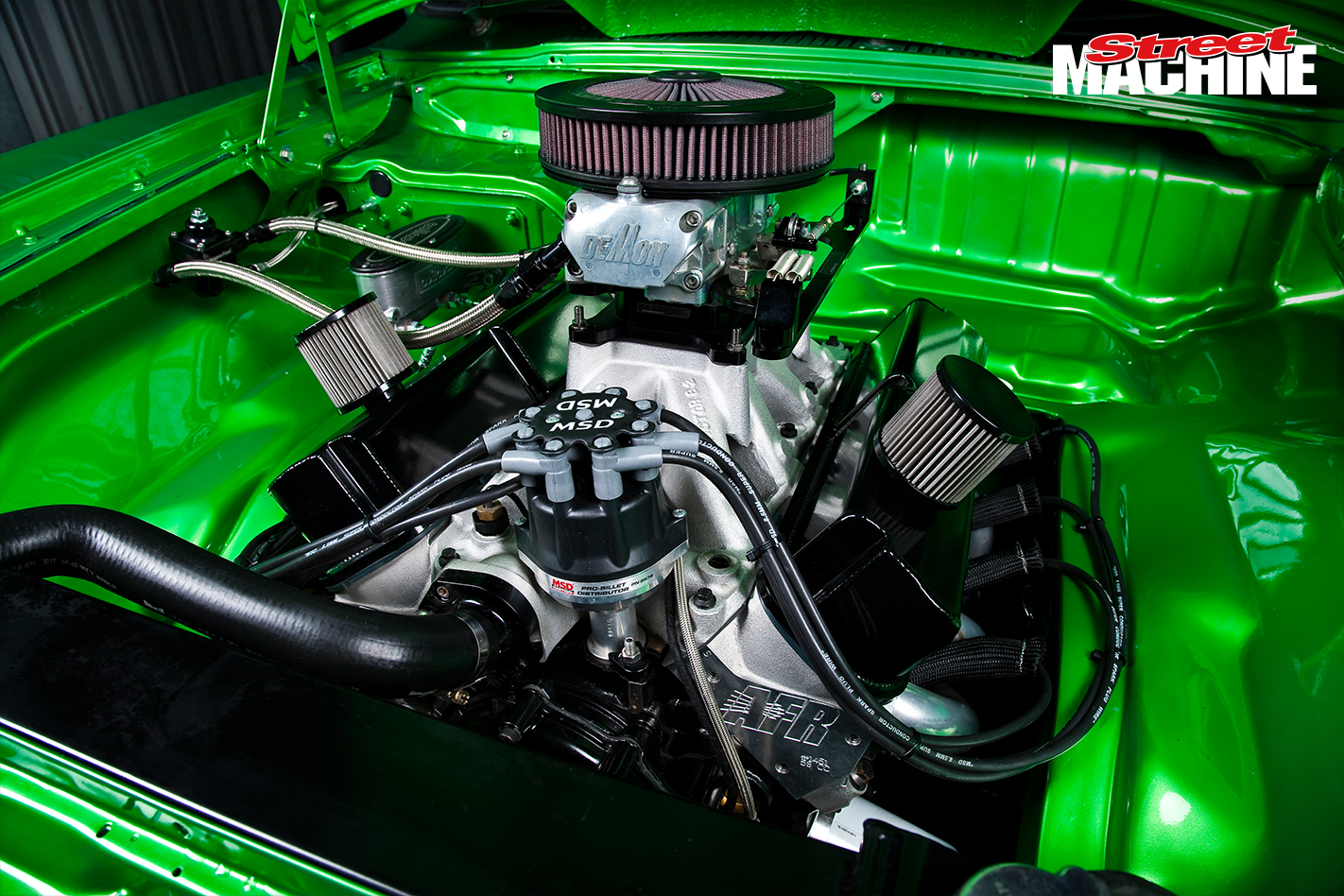 Out came the C4 and in went a Keith Neal-prepped Powerglide with a Dominator 5200rpm converter, while up the back they finally ditched the old custom 31-spline Borgy bum for a proper 31-spline nine-inch. The rear brakes are just XD drums so they’ve added Wilwood discs and calipers up front to make sure the whoa matches the go.

Inside, the car came with basic black trim and the factory dash had been carved out with a few added gauges, but Mick wasn’t really a fan.

Pazzo came to the rescue again. He bought a wrecked Cortina from Shepparton wildman Harry Haig, and Mick was lucky to score himself a new factory dash and some tidy brown trim. Apart from the MOMO wheel, Auto Meter gauges and the TCI shifter, you could almost call it stock, but we reckon it looks the business.

All in all Mick is damn happy with how the car has turned out. It’s got plenty of balls and it stands out amongst the hordes of Toranas marauding southern dragstrips. We spotted it freshly finished at Performance Car Mania this year where Mick had a grin from ear to ear despite punting it off into the mud and grass during drag practice. But PCM doesn’t run drag timers so he had no idea what the new combo ran. 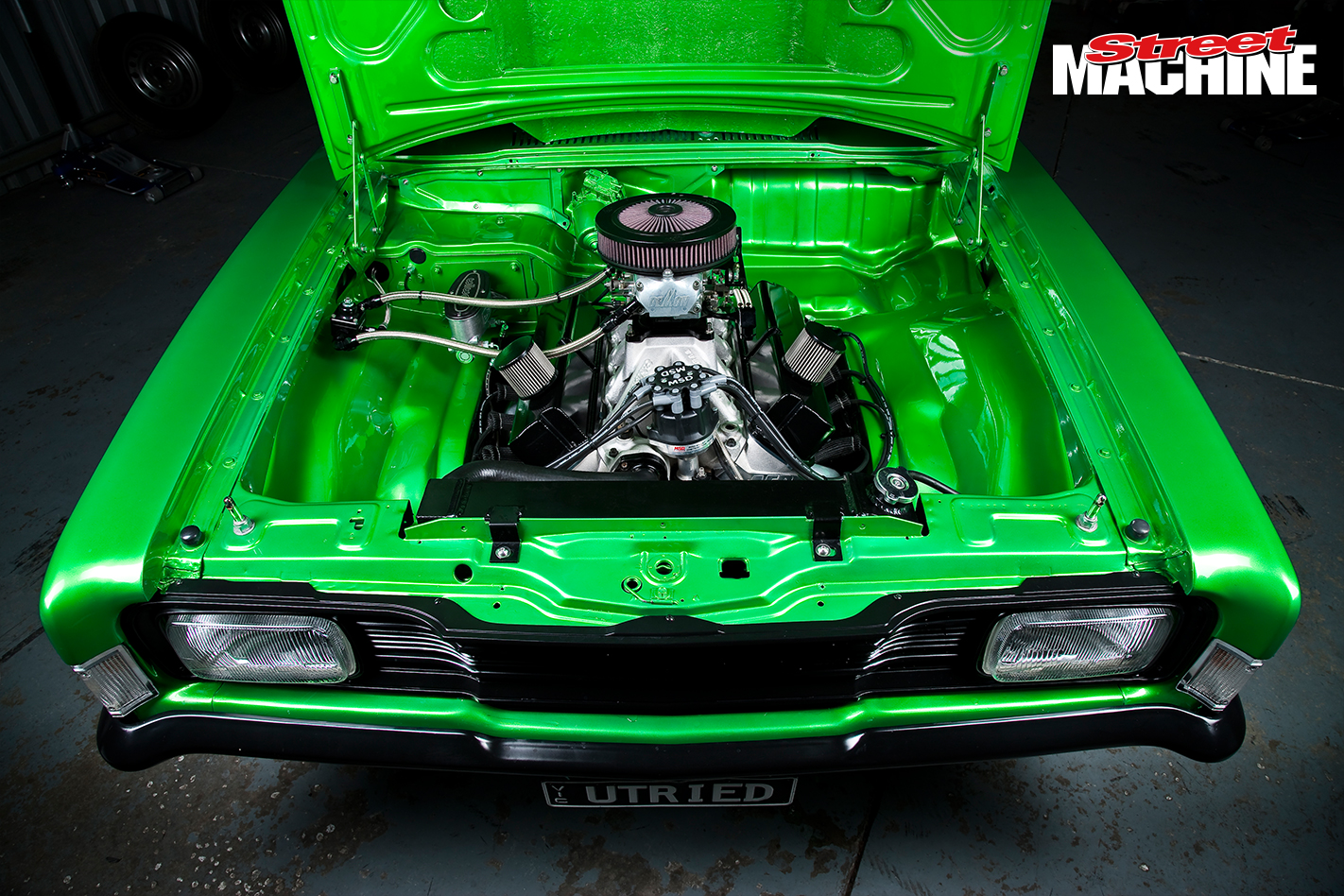 “The aim is to drive it to the track, run a nine then drive it home with the pipes and air cleaner on, and running pump gas. Then we can give it a hit with the gas at a later date.”

Well, be careful what you wish for. Since then Mick has clocked 9.58 @ 136mph without gas, and dipped into the 8s with a PB of 8.99 @ 156mph with nitrous at King of the Streets (KOTS) at Heathcote Park on Saturday. Beast. 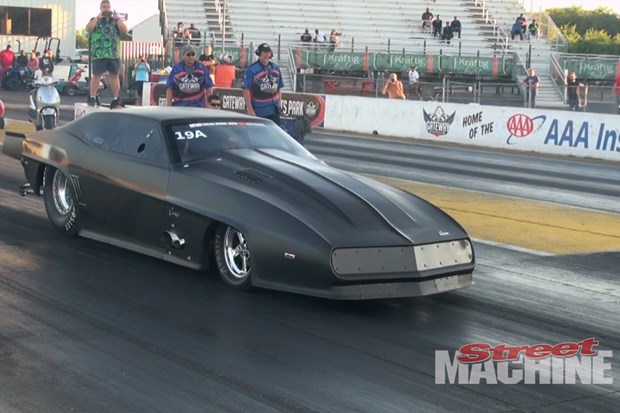 The toughest test of street cars on earth, Hot Rod Drag Week, doesn’t kick off until tomorrow, but already the records are tumbling 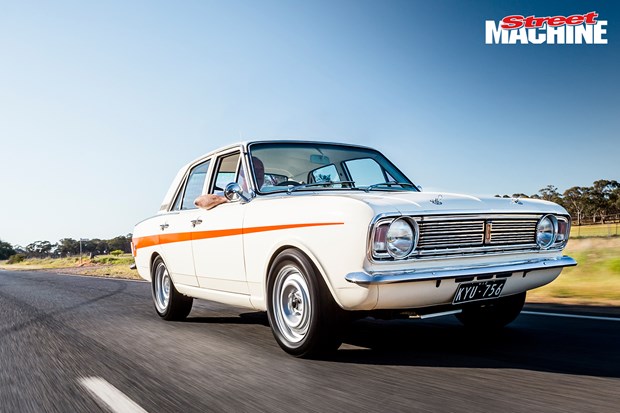 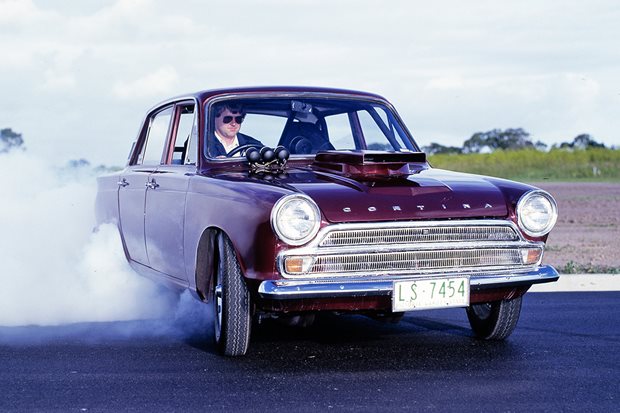