We check out another big-horsepower RB build on the dyno

WE LOVE big-horsepower six-bangers, and when we stumbled across this balls-to-the-wall billet RB28 on the engine dyno at Powerhouse Engines, we knew we had to stick around to see what numbers it would crank out. 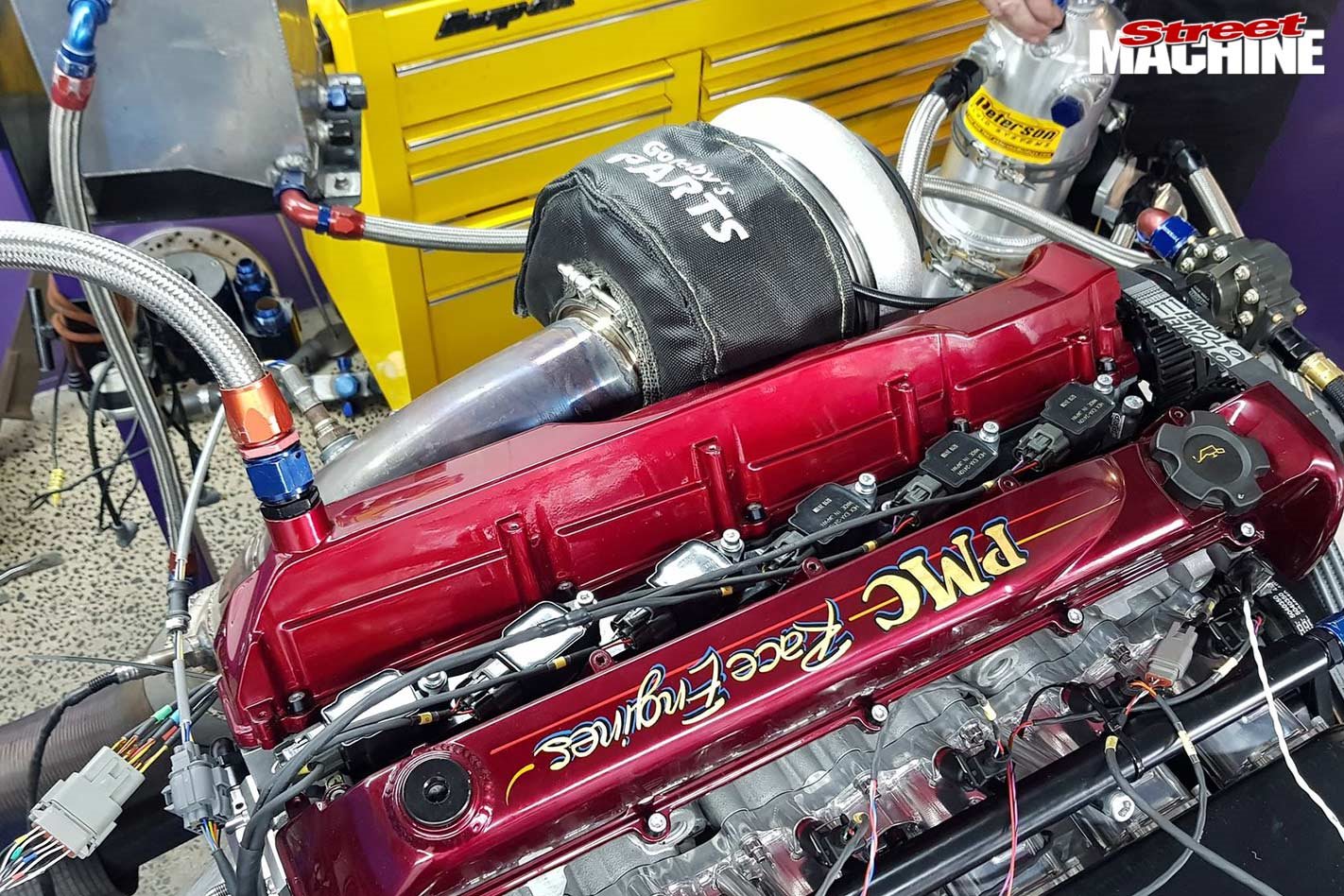 The package was developed and put together by Peter McDonnell from PMC Race Engines, along with some machine work from Johnny Pilla at Powerhouse Engines, with goals of over 1500hp on the menu.

Peter started off with a brand-new billet RB26 block, fitting it with a Nitto 77.7mm stroker crank along with Calico bearings massaged to PMC specs, Nitto I-beam rods and BME forged pistons specced by PMC to a 10.5:1 comp ratio. 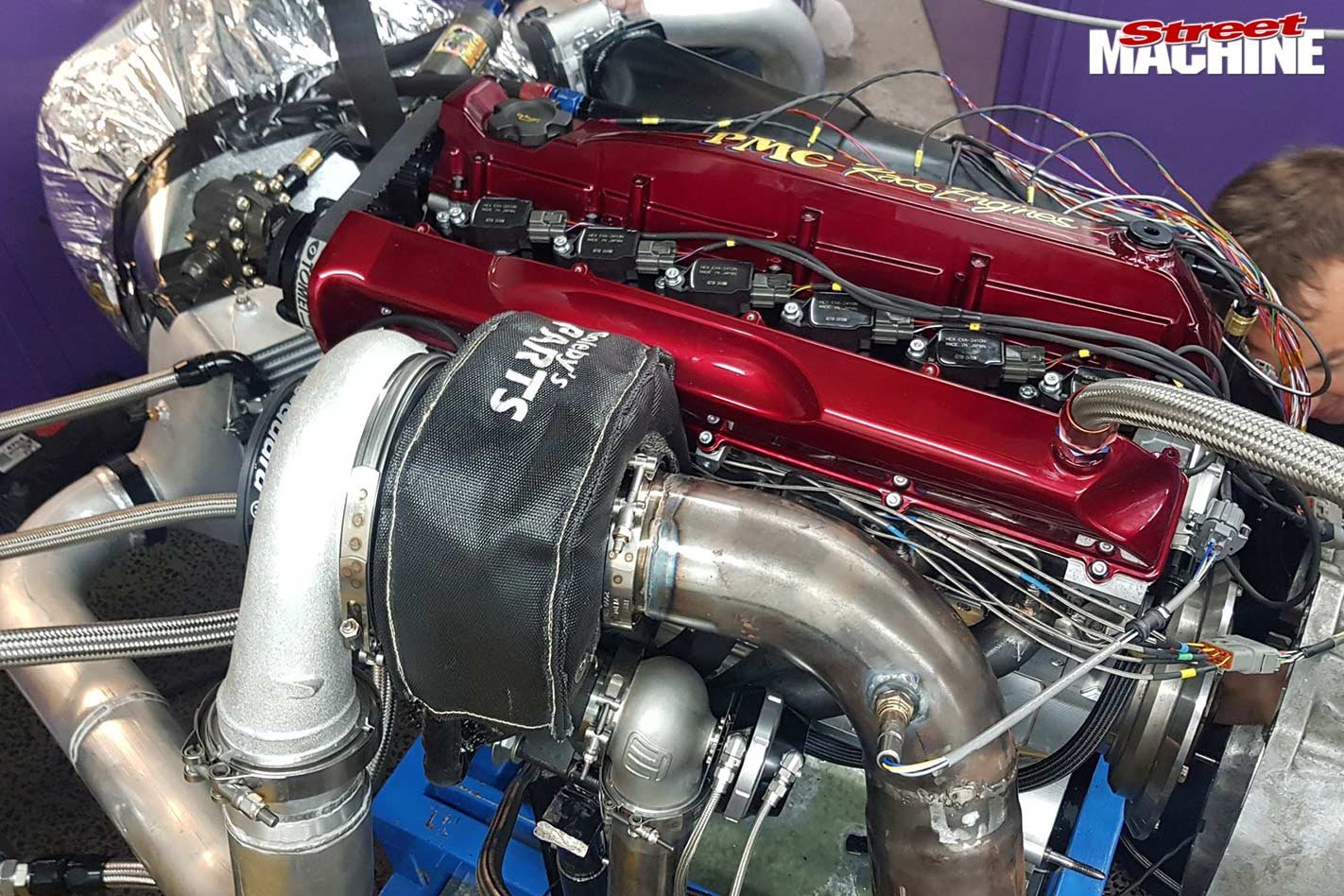 The top end is an RB26 head hand-ported by PMC, and uses a Nitto head gasket and Kelford cams and gears.

Hanging off either side of the head is a Hypertune inlet manifold breathing through a Hypertune intercooler, while the exhaust side uses a 6boost manifold with a 60mm external wastegate. The boys did their initial runs on the dyno with an 83mm Precision turbo, before switching to the beefier Precision 86/85 hairdryer used to crank out the mammoth 1600hp. 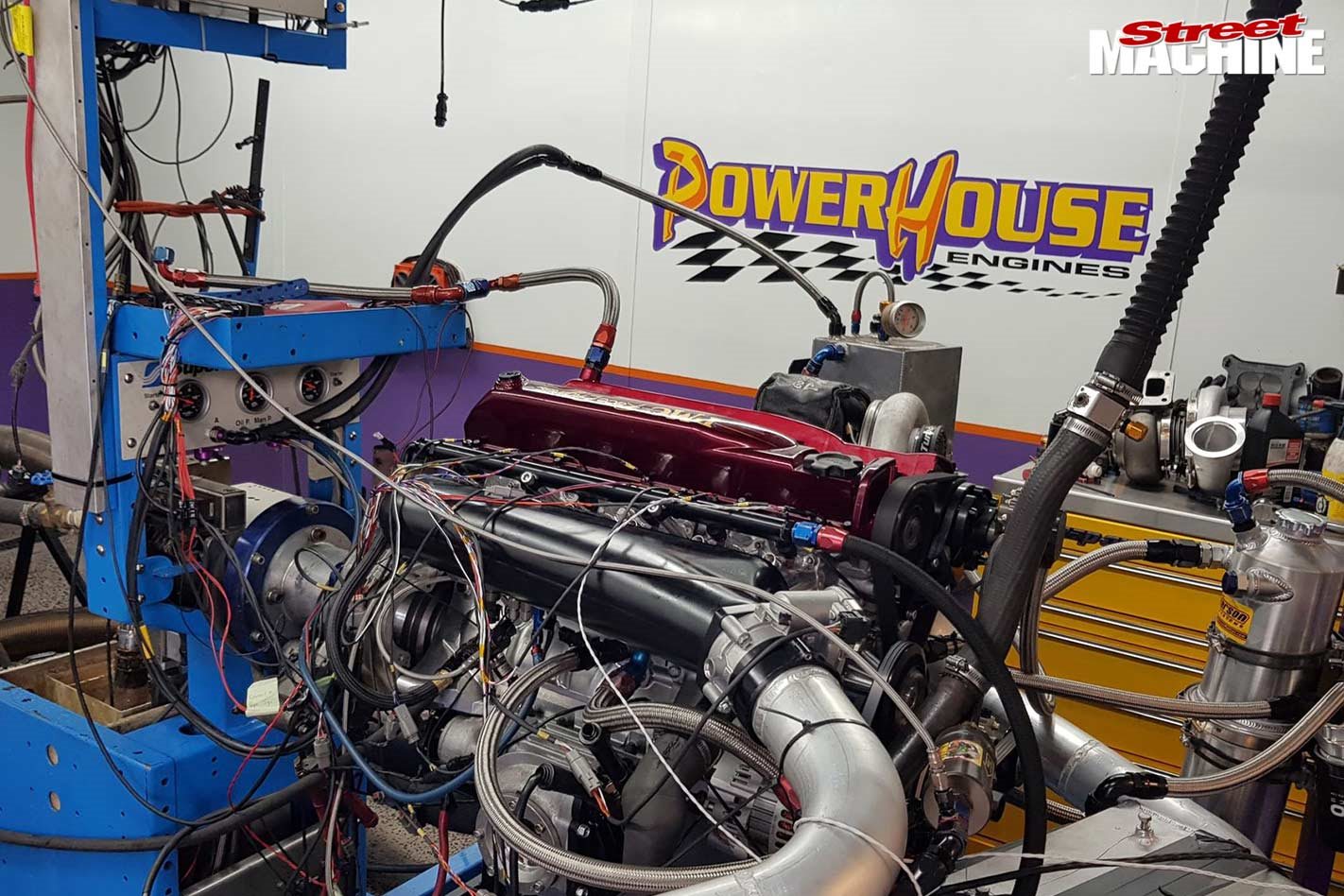 Oiling is often a big issue on high-horsepower DOHC RBs, so Peter went to town on this one to ensure it stayed well lubricated at 9000rpm. The RB28 uses a dry sump system with a whole bunch of gear from Platinum Racing Products (PRP). The system uses a Dailey four-stage pump, with a custom-made sump by Peter and a PRP billet oil pump block-off plate. 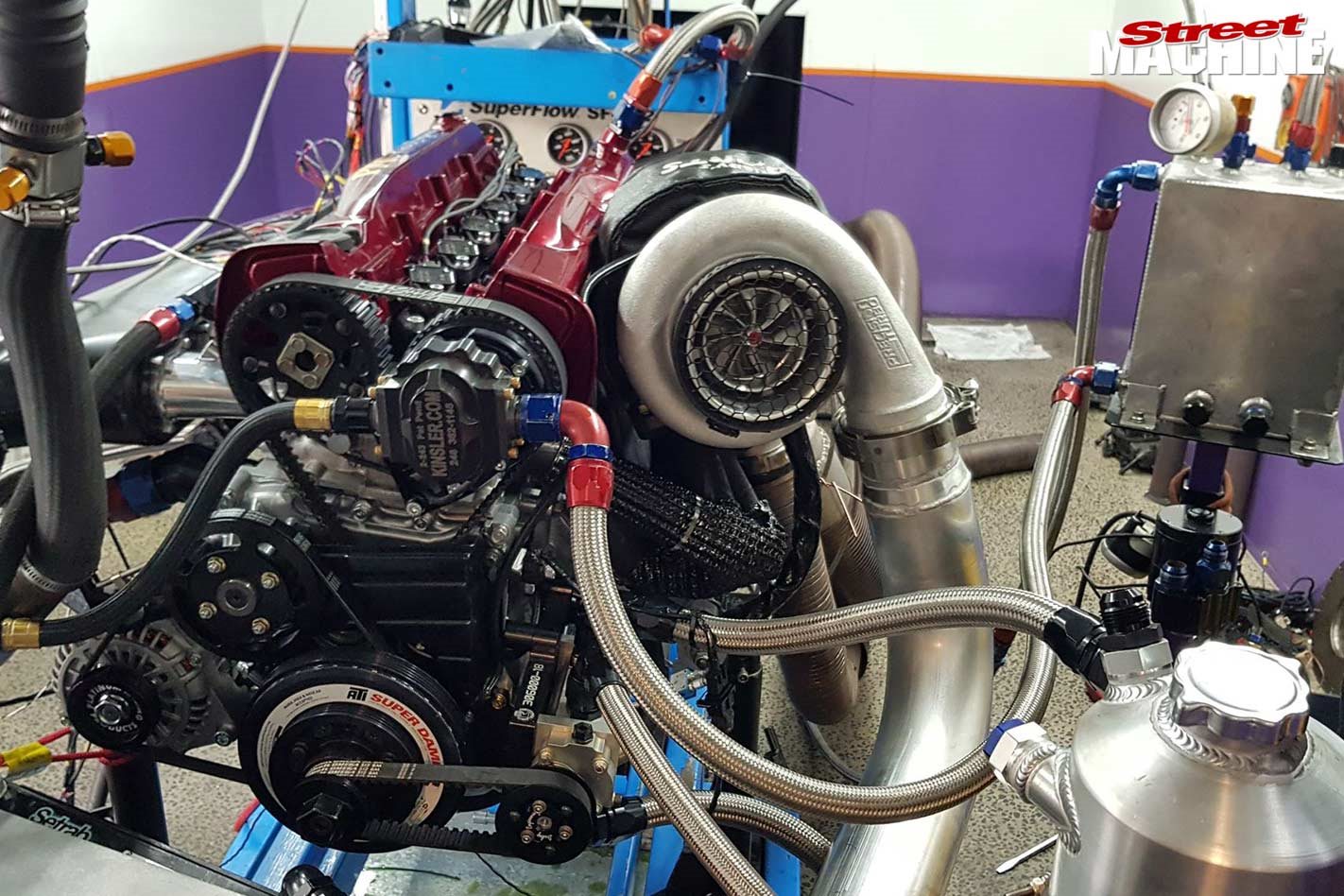 Fuelling is also taken care of with a mechanical pump, using a belt-driven Kinsler pump from PRP with 2400cc injectors. All the timing and ignition uses PRP gear as well, with the company’s Pro Series trigger kit and R35 GT-R coils employed to keep the spark consistent at 9000rpm. A MoTeC M150 is the brains of the operation. 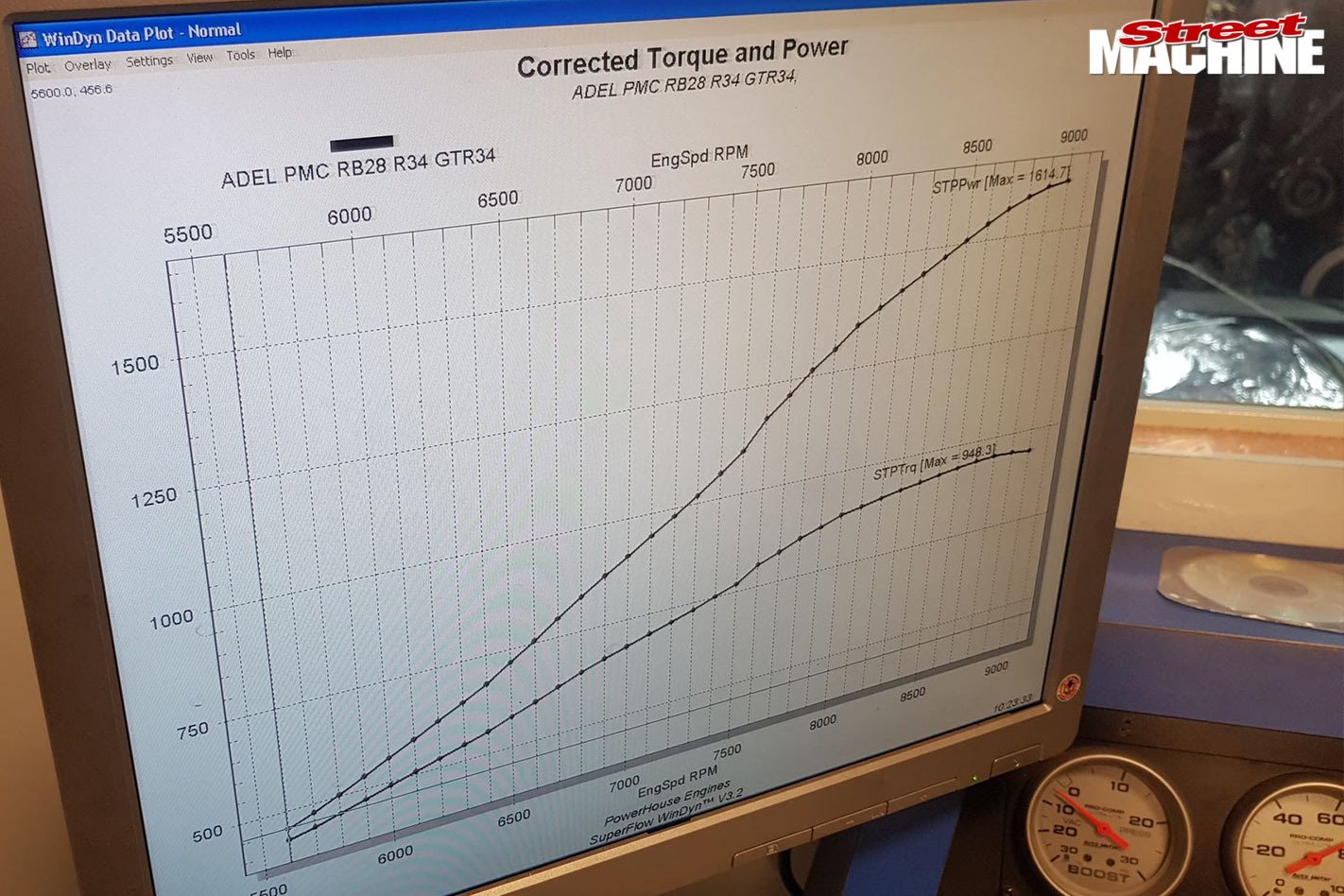 The tuning was taken care of by Brad Sherriff on the Powerhouse Engines dyno, with the boys initially getting 1414hp from the RB on 44.6psi with the smaller 83mm Precision turbo. After ironing out a few bugs, they chucked on the bigger 86mm snail to yield a staggering 1614hp on 51psi at 9000rpm, well and truly exceeding the customer’s expectations.