HARRY Haig is a name that has become very familiar to Street Machine readers, and we thought we’d take a quick look at just some of his toys. 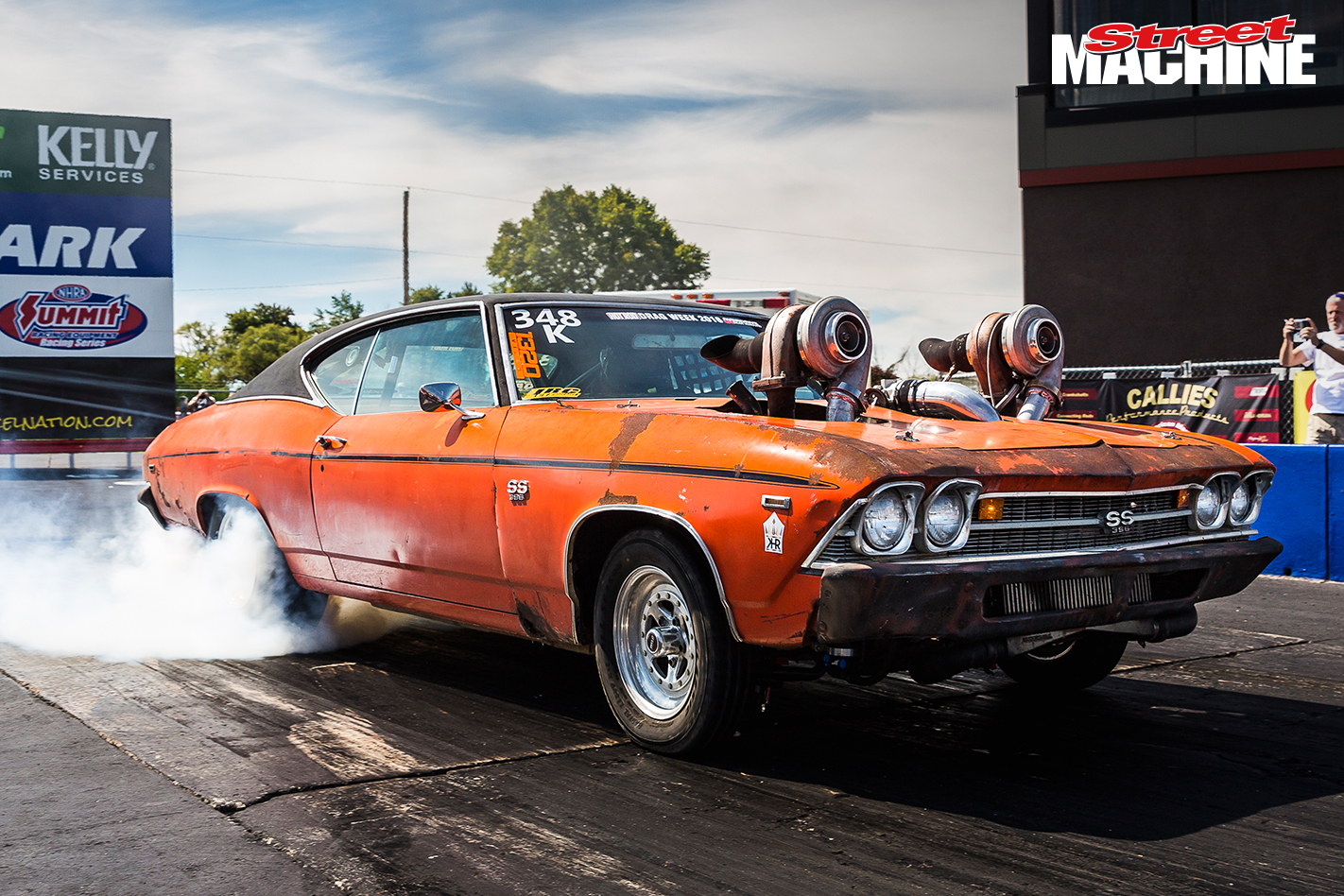 Harry, which isn’t actually his real name, is larger than life. He loves a drink, and a laugh, and can’t help but build crazy cars just for the hell of it. Whether it’s a rusty Chevelle dragged from the long grass of a Kansas field, or a sweet one-owner HQ that just needs a turbocharged big-block Chev; Harry loves to make a statement. Usually that statement is, “Hold my beer and watch this!” 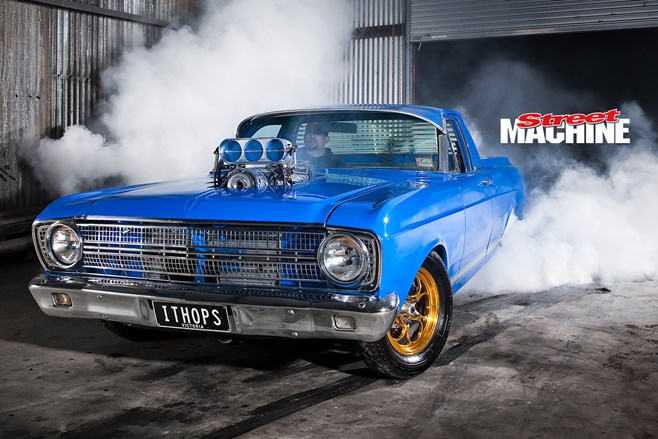 Our first introduction to Harry came at a secret shed party in Shepparton where he cranked up his blown XR Falcon ute and hooked it around in a space barely big enough for the job, destroying a couple sets of tyres with spectators standing just inches away. Then he won the first Ultimate Burnout Challenge way back in 2009 with his blown small block Ford pulling over 9000rpm. Harry tried it to go bigger and better in 2010 with the ute revving to 11,000rpm until it broke the dizzy drive – no one had ever heard a supercharged V8 sing like that on the burnout pad before then. 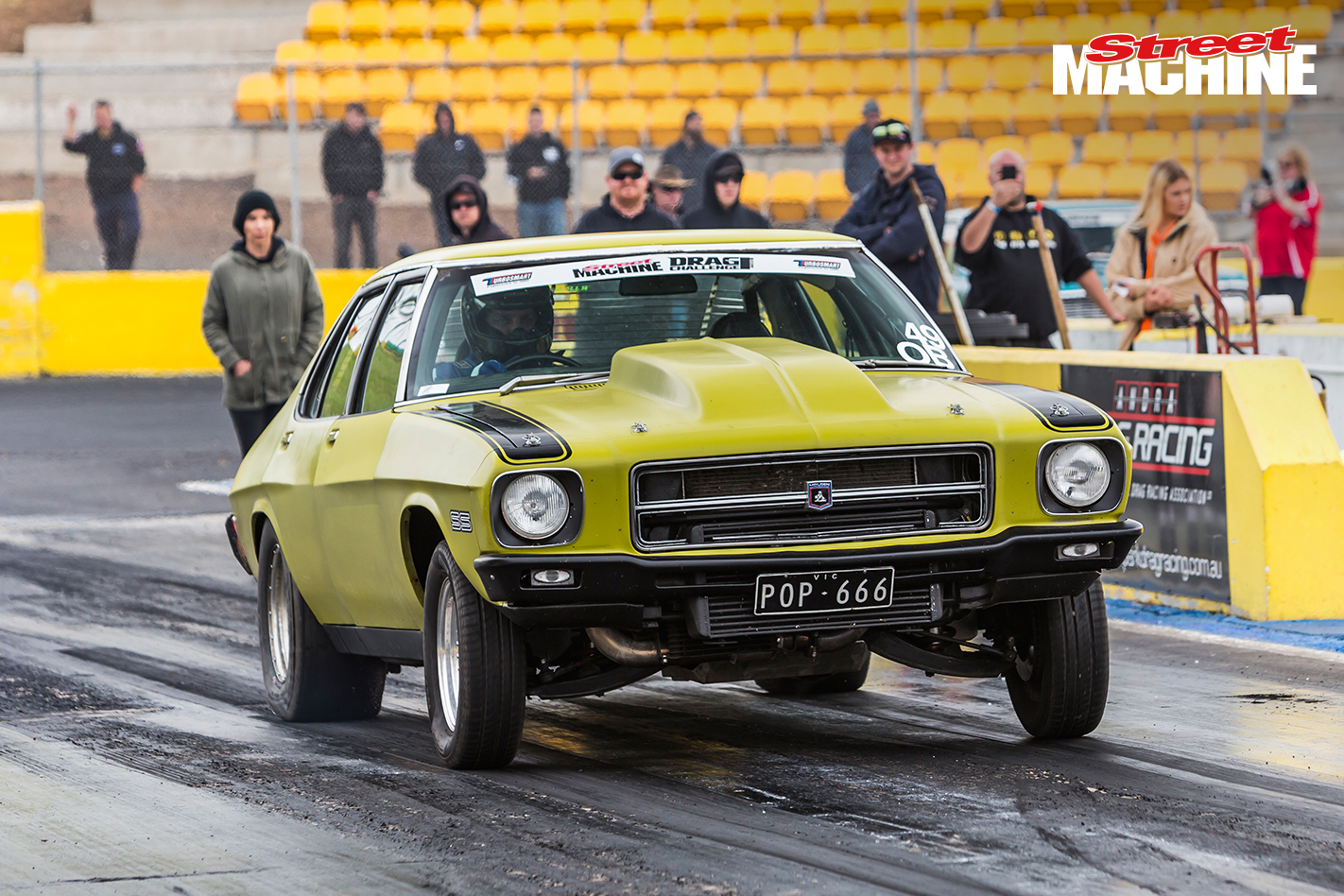 Then there’s POP666; it started off as a barn find HQ sedan that Harry dropped a built 510ci big block into with a massive single turbo and Haltech EFI tuned by Tunnel Vision. The car has been at all three Drag Challenge’s and has run in the low eights at almost 170mph. The car is as loose as its owner and frequently makes trips down the quarter with one of the front wheels pointed at the wall. 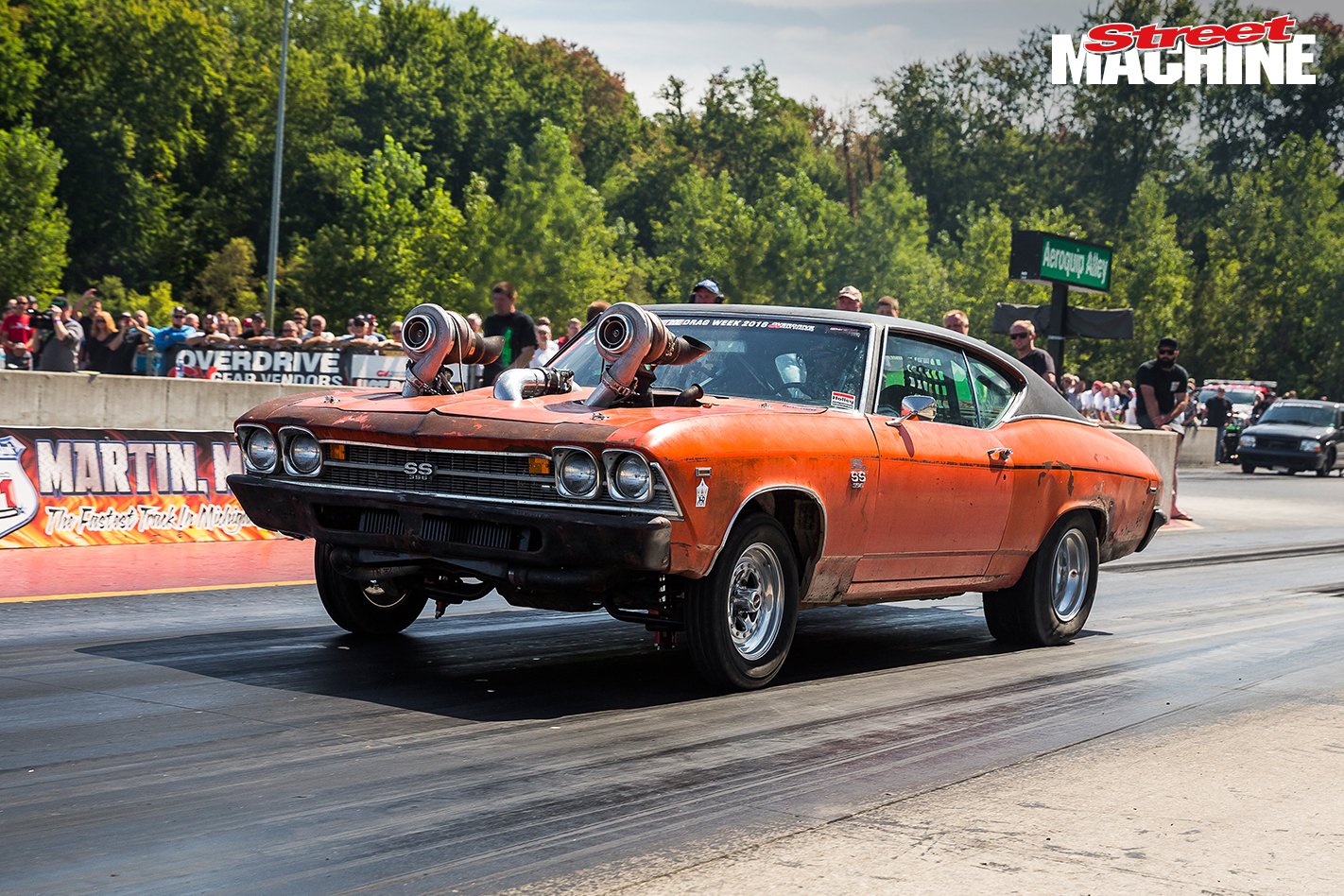 But the car that most people would recognise is the Drag Week Aussie Chevelle. The car earned its nickname in 2015, and while the car may have never visited our fair shores the car is definitely Australian in spirit. It’s a bit rough around the edges, and loves a drink, but the Chevelle just keeps on going despite any obstacles put in front of it. In 2015 the guys dragged the Chevelle from behind The Car Shop in Independence, Kansas and hosed out before they replaced a few bits and pieces in the interest of safety and hit the road. They ran a best of 14.0@100mph before getting disqualified for going off route on Day Five. The guys gave it another crack in 2016, but this time they took a twin-turbo 540ci engine over with them and plugged it into the tired shell. In the space of a week they had transformed the Chevelle into a genuine eight-second screamer and the guys basically set the internet alight with their antics during Drag Week. 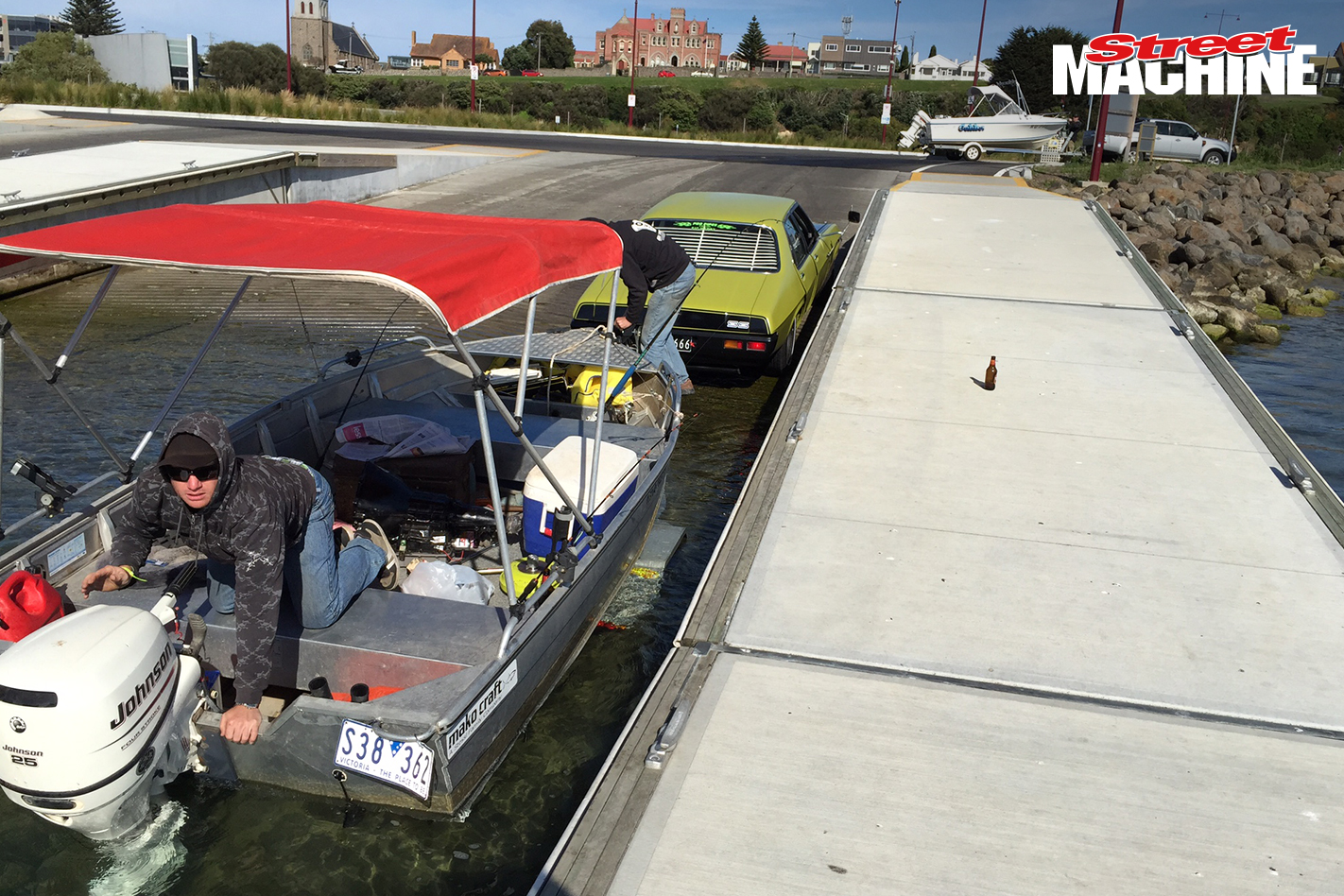 Harry’s other toys include a NASCAR-powered ’64 Falcon Sprint that’s still in the build, an old Buick wagon with a big block Chev and a crazy custom pickup nicknamed DOUGAL that seems to light the tyres wherever it goes; and we can add one other to the list. 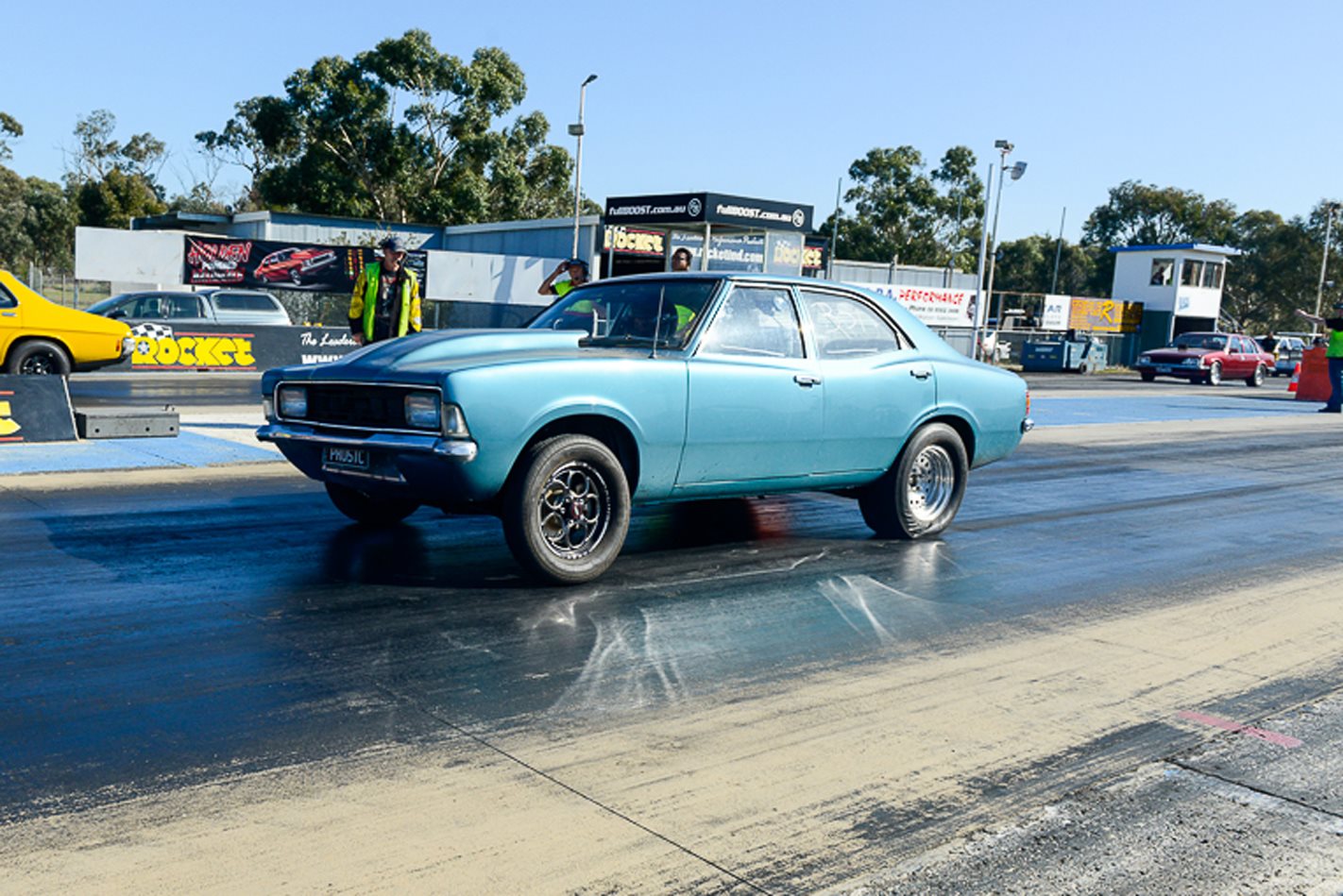 Last weekend at the Holden Powered Nationals, Harry debuted a Ford Cortina he’s had laying around for a while. “I bought it for my son Corty when he was two years old,” Harry says, “He’s 14 now and he’s done most of the work on it. Corty wants to take it on Drag challenge in two years; he does test hits on the back roads of the farm.”

Why it was at the Holden Powered Nats is something only Harry can answer, but with 496 cubes of big block Chev up front it was at least trying to be part of the family. Now a big block Chev in a Cortina sounds interesting enough but Harry went one better and fitted a four-speed Top Loader for maximum giggle factor. Watching the Corty go down the quarter the question seemed to be what would break first? The car or the gearbox? In the end it was the four-speed which succumbed first, the chunky Ford gearbox managed to last a few runs before it snapped the input shaft, but the Cortina certainly did its best to try and impersonate a pretzel.

It’s not like Harry needs any more encouragement, but we can’t help but think, what has he got planned next?