THE first Street Rod Nationals were held in the NSW Riverina town of Narrandera in 1973, under the auspices of the Australian Hot Rod Federation. The AHRF soon split into ANDRA for the drag guys and the Australian Street Rod Federation (ASRF) for the hot rodders. While ANDRA has been having a tough time of late, the rodders have been going from strength to strength, as we saw at the 23rd ASRF Nationals, held at Easter in the Victorian gold rush town of Bendigo. The event is held every two years, moving from state to state each time to share the love around, although ‘regional’ nationals have been held in the ‘off year’ since the late 90s, giving farther flung areas their time in the sun. This was the first time Bendigo had hosted the Nationals, and the city pulled a record-setting 1350 cars from every state and territory, with the longest distance travelled being Tony Brittain from Bunbury, Western Australia in his ’47 jailbar pick-up.

The action was based around the showgrounds, which offered the essential ingredients needed for a successful Nationals – a big oval for the show ’n’ shine, a cruise route, a big indoor area for the show cars and traders and – perhaps most importantly – a strip of tarmac for the go-to-whoa. The driving events are run by Noel Inman and his clubmates in the Marsh Rodders. In our estimation, Noel has done more passes down the quarter-mile than any other hot rodder in Oz, so he’s the perfect man to have in charge. He even took his famous Tall T out on the track before the start of competition and set the tyres ablaze for length of the strip – just to make sure the track was nicely covered in rubber for the competitors. Pretty considerate, eh?

Even so, many of the go-to-whoa competitors suffered from traction issues, including the eventual winner of the event, Queenslander Wayne ‘Weetbix’ Sampson in his little ’34 pick-up. Wayne also took out the dyno comp, while Kim Bevan won the ladies go-to-whoa in her ’32 tourer.

The only other driving event of note was the Bag Of Gold Drop (another variation on the spear-a-spud or grab-a-flag theme), but the organisers put on lots of other fun activities to get everyone involved, including mini-rod racing for the kids, a sparkplug-changing competition, a fashion show, live bands, model car building and the infamous trolley race.

In terms of judging, things are limited to a Top 20 that is voted on by the entrants. Whoever finishes top of that list is rewarded with Top Car of the event, which was won by Mick Speranza’s black ’35 Ford coupe. We featured the car in Street Machine Hot Rod #15, and you can check out the story by doing a search on streetmachine.com.au. The next Street Rod Nationals will be in held Maryborough, Queensland over Easter 2019. In the meantime, let’s take a closer look at some of our favourite entrants. 1. Roger Brockway has owned his channelled ’34 five-window coupe for almost 50 years, though it has been off the road for quite some time. With the help of good mate Peter Quaife, Roger resurrected the coupe in time for the Nationals, adding Ardun heads and a SCoT supercharger for good measure 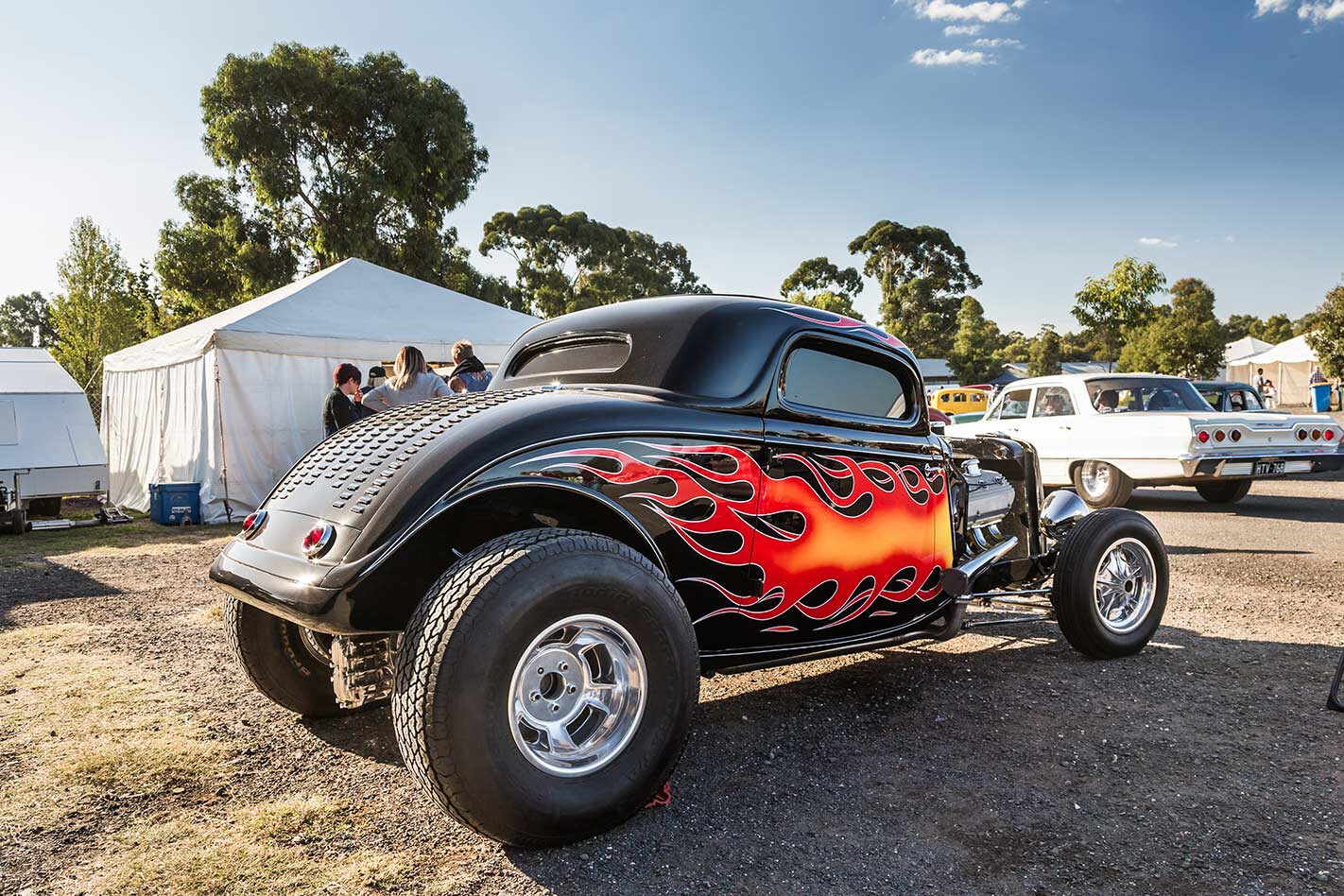 2. Marcus Shea’s Hemi-powered 1934 coupe isn’t quite finished, but it’s going to terrify the neighbours when it’s up and running. Highlights include the gloss-black duco with killer flames by Steve Costa, spindle-mounts and a Halibrand quick-change 4. Keen eyes will remember seeing David and Shelly Murphy’s ’32 roadster chassis on display at the Victorian Hot Rod Show earlier this year. The finished product is a cracker, complete with a detailed 312ci Y-block, killer paint and great trim. You can check out it out in the next issue of Street Machine Hot Rod 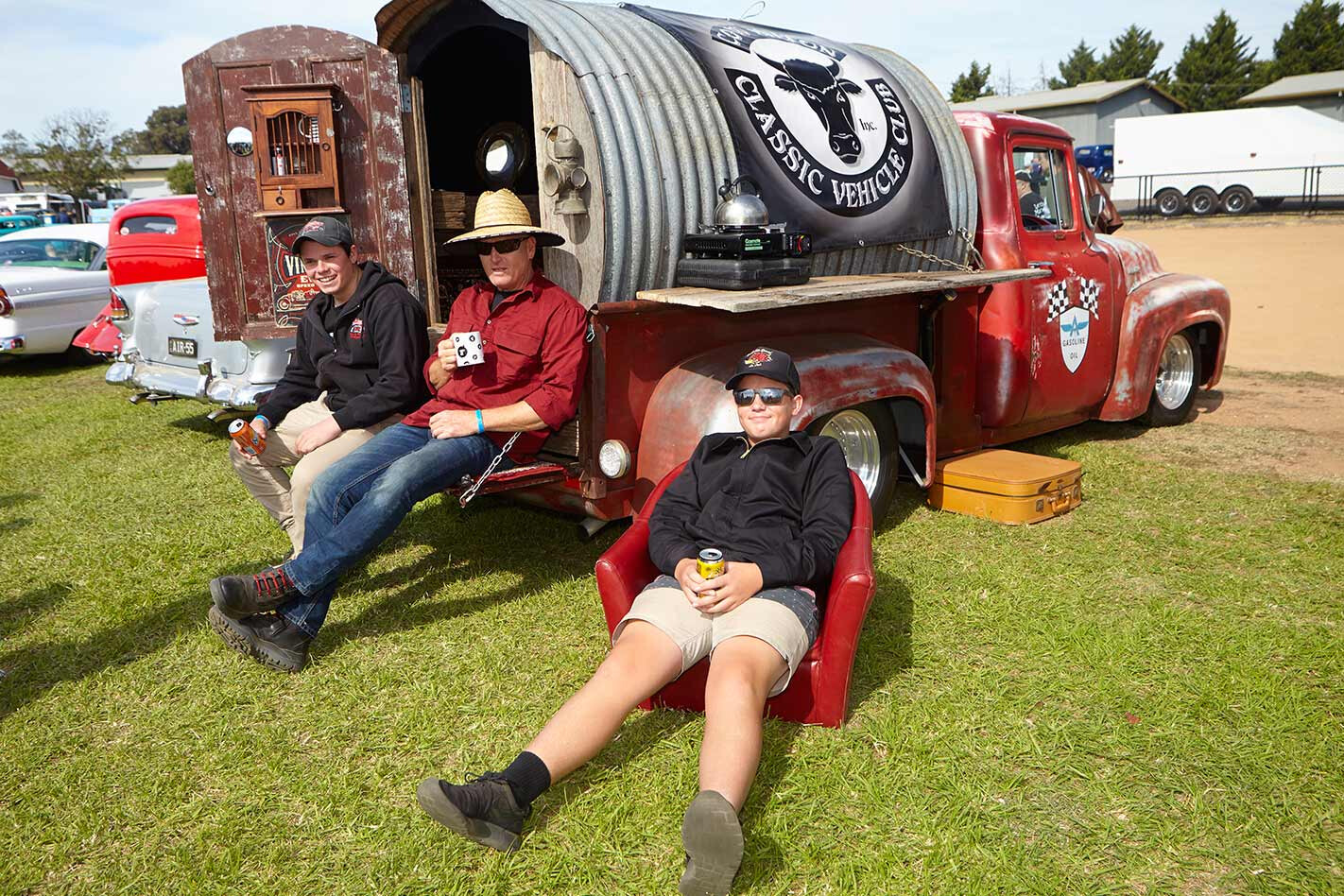 5. Goose’s ’56 F100-based Hobbit Hut provided shelter for the weekend for him and his nephews. The truck sits on an HZ Holden chassis and runs an injected 5.0-litre for power. The hut can be winched off with ease, transforming back into a practical farm ute, should the need arise 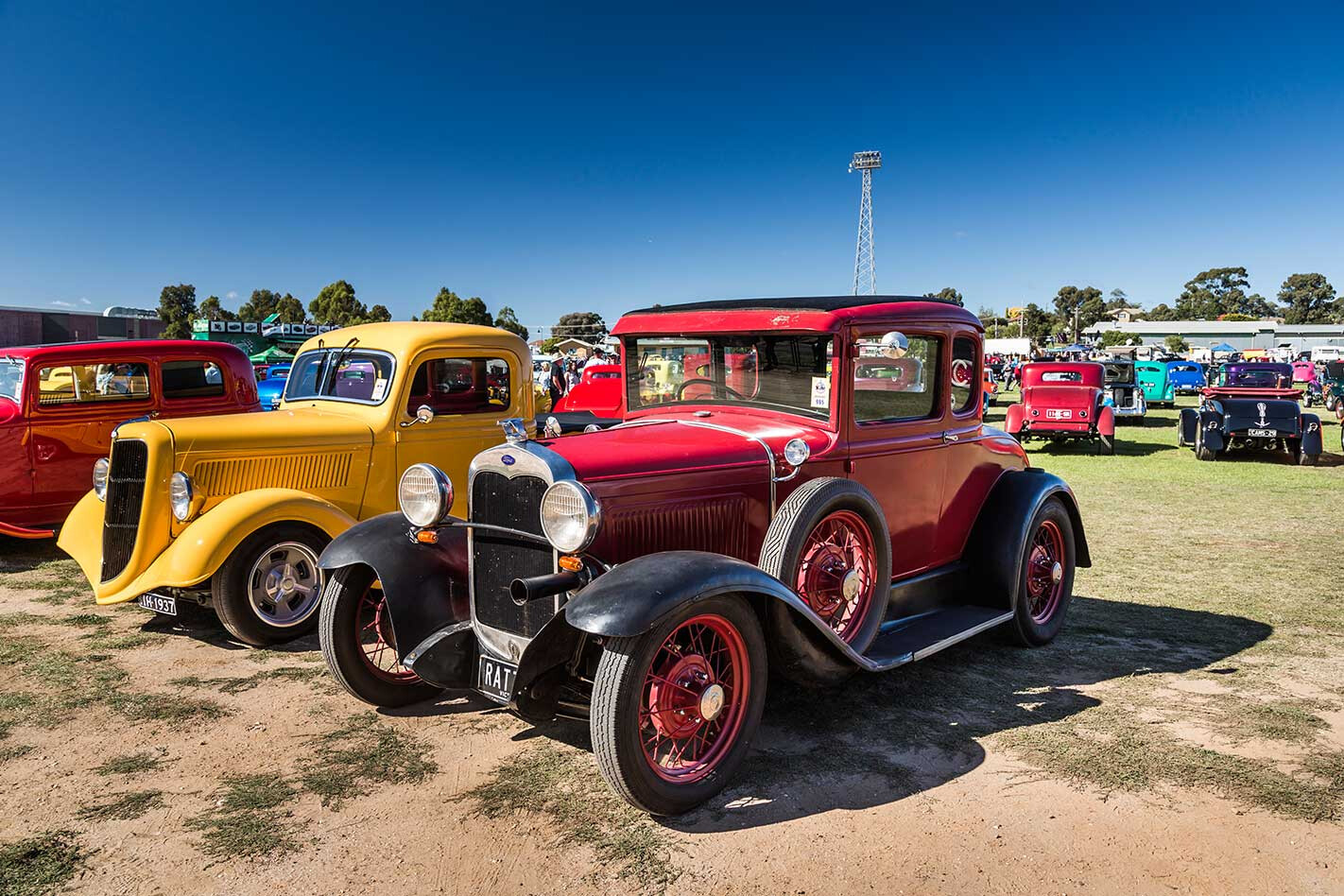 6. Sleepers don’t get much snoozier than Shaun Colliver’s 1930 Model A coupe, with only the slightly wider track and a race shifter giving the game away. Lifting the hood reveals a stonking 460ci Ford big-block, backed by a Powerglide and 9in diff 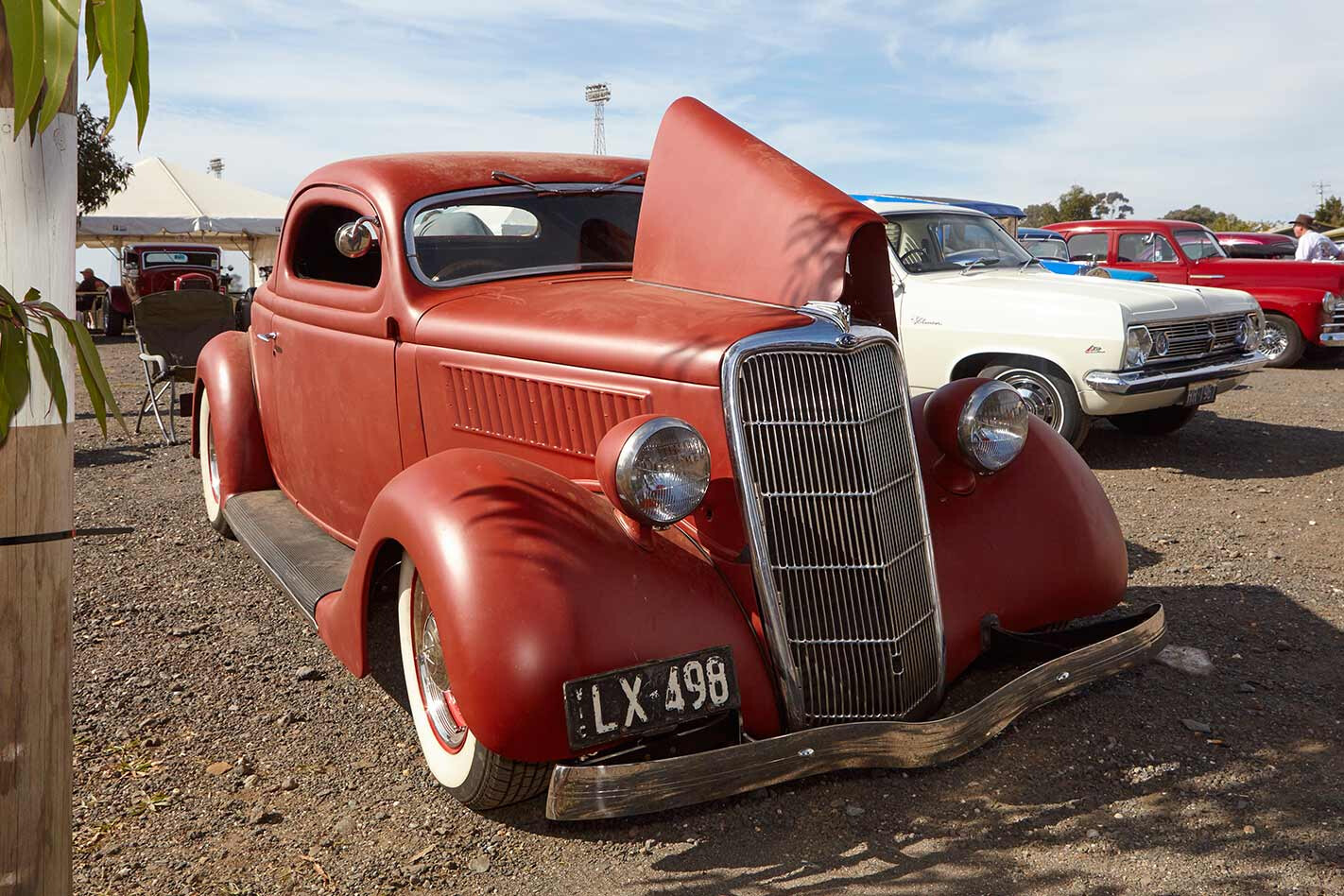 7. Steve Walsh’s ’35 coupe was chopped in the US in the 1950s, but has been sitting in Steve’s farm shed for the past decade or so. The Nationals gave a goal for completion, with Paul McCallum from Flamen Hot Rod Engineering in Tocumwal, NSW handling the welding and panel-banging duties. A conversion to right-hand drive and addition of a 302W/C6/9in driveline rounded out a successful rebirth 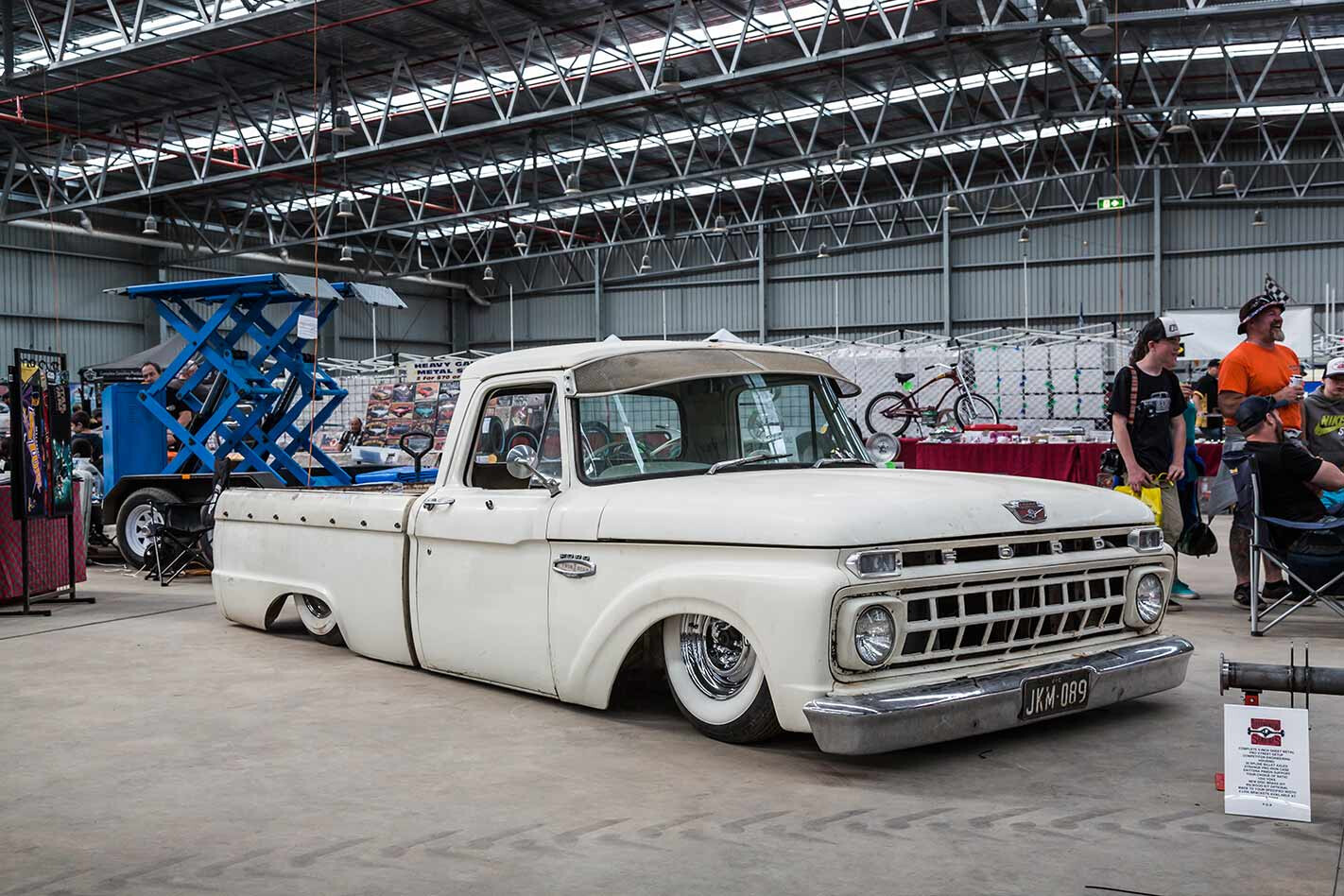 8. Matt Dietrich’s ’65 Ford F100 is still in the build, but sitting pretty! The chassis work was done by Leon Davies at Big L’s Chop Shop and includes a Jag front end and four-link rear. The engine will be a stock 302 with EFI, backed by a C4 trans and Geelong Differentials 9in. Rolling stock will consist of factory steelies and Coker whitewalls 9. Scott Marshall’s ’41 Willys coupe is an evil son of a bitch, powered by a blown and injected, twin-magneto, twin-plug Hemi. It has the stance and attitude of a Wild Bunch car, but with show car appointments and finish 10. Michael Silke’s ’59 Cadillac was one of the standouts of the weekend, thanks to its mind-blowing candy paint, acres of chrome and stunning trim. Under the hood is a 390ci Caddy mill running EFI, backed by a VE Commodore auto for maximum leisure on the highway, with airbag suspension to get it down low 11. Andrew and Lynda Eleftheriou took out the Drive-By Judging comp with a Bonnie & Clyde theme to go with their nasty ’28 Dodge sedan, which they’ve owned for nearly
three decades 12. Leon from Big L’s Chop Shop has been busy. His XK Falcon sedan delivery scored a makeover just prior to the Nationals, with mate Adam Guglielmi applying the new satin bronze duco. Body mods include a rear rollpan, shaved badgework, ’61 Oldsmobile tail-lights and ’64 Lincoln door handles. The XK sits down hard on its 14in Cragar rims thanks to a set of Stubtech drop spindles, airbags all ’round and a channel job to the rear of the car 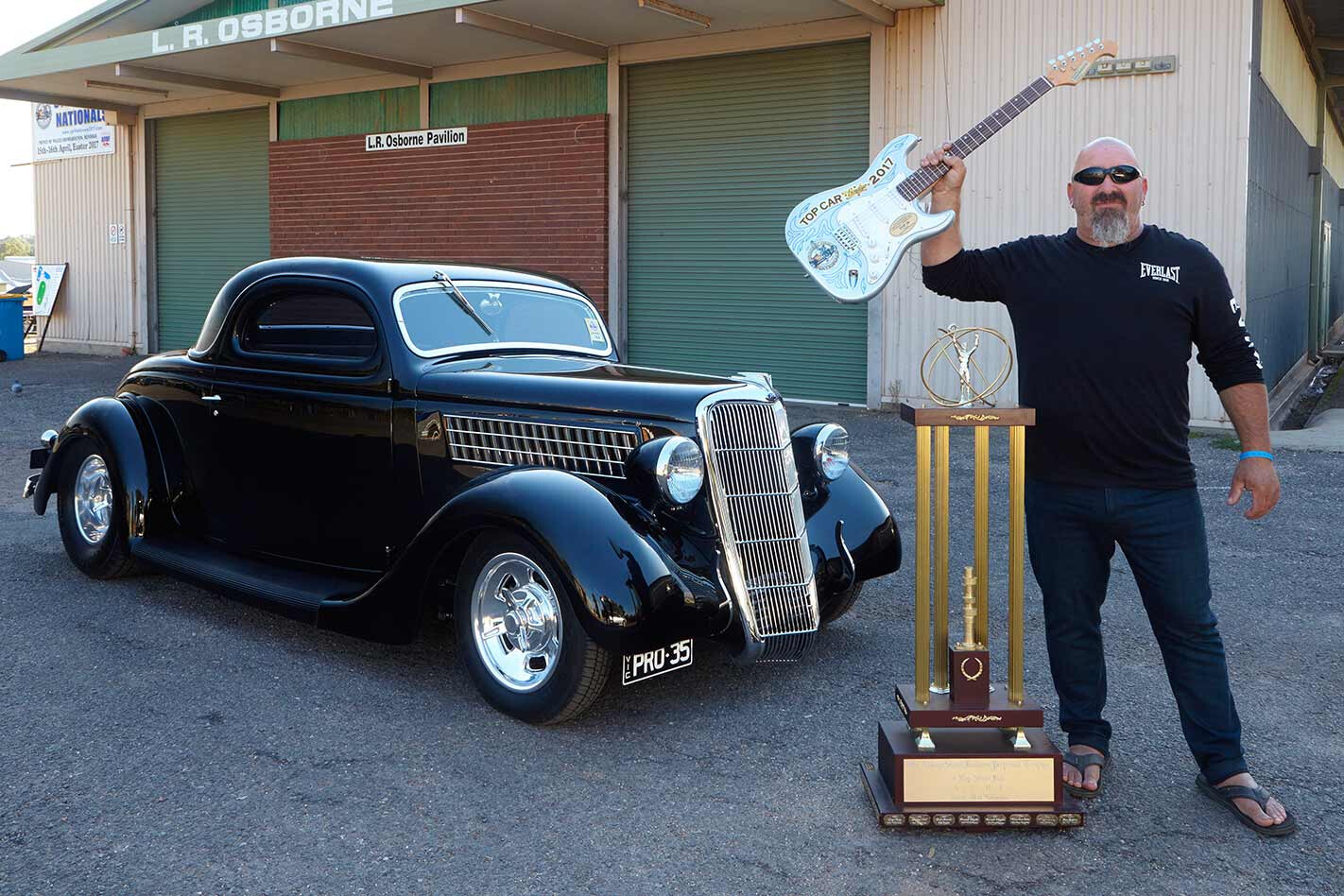 13. Winner of Top Car of the event was Mick Speranza’s ’35 three-window coupe, which we featured in Street Machine Hot Rod #15. The car combines a tough pro street look with blown small-block power and flawless paint 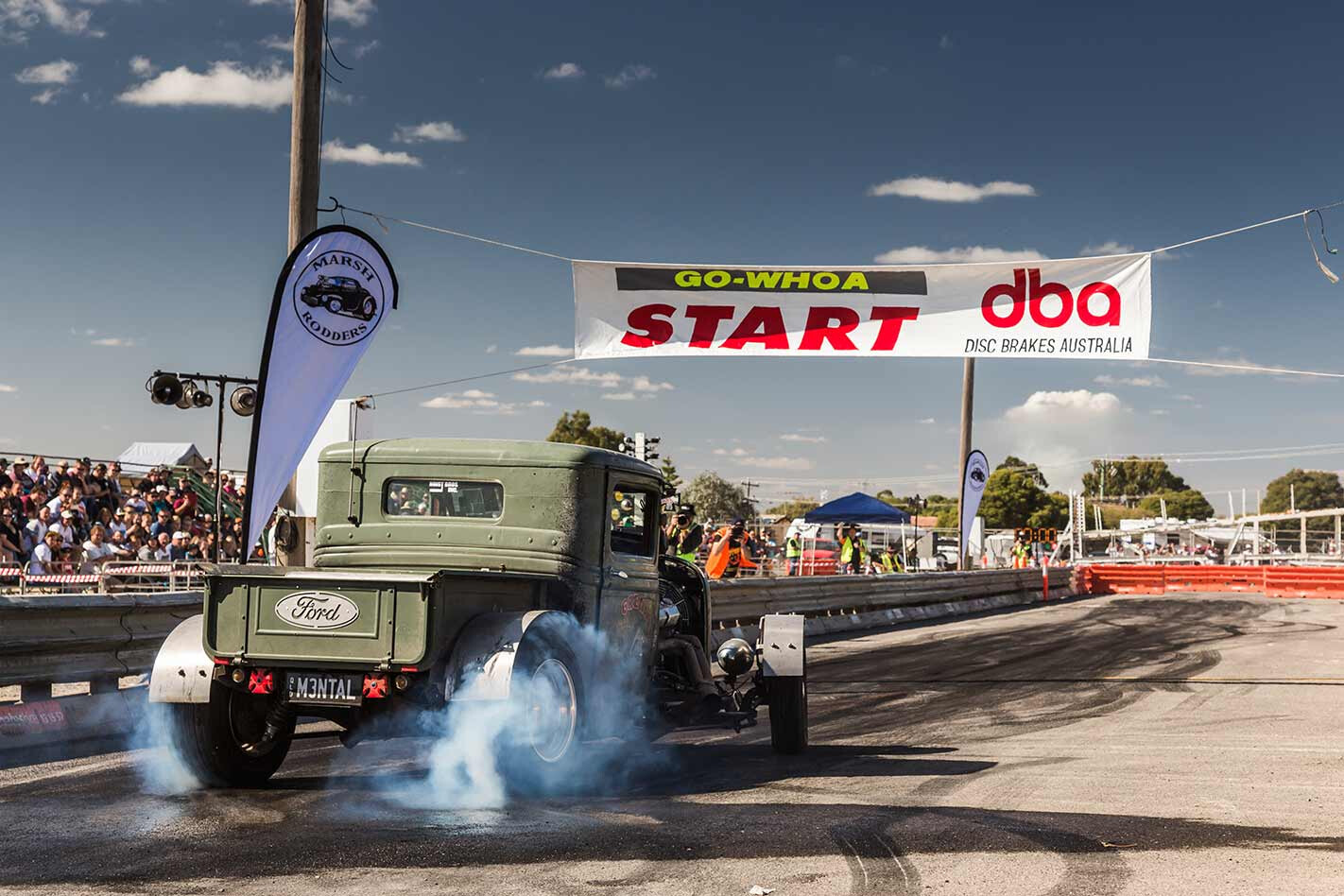 14. 'Weetbix' Sampson puts down the pain in his tunnel-rammed small-block-equipped pick-up 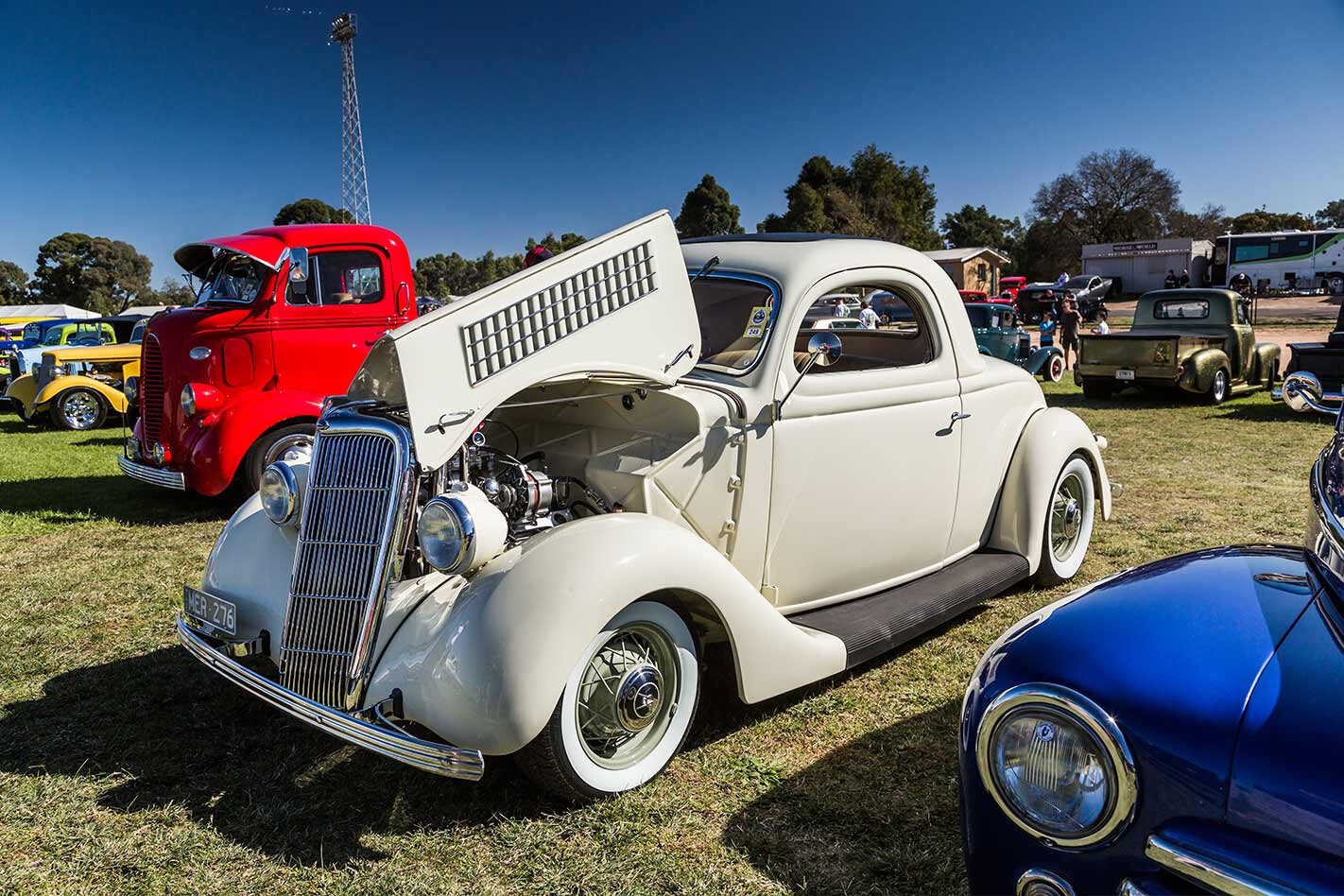 15. Tasmanian Don Langdon has built many tasty cars over the years. His ’35 is based on a Bob Cain ’glass body, but you’d have to get pretty close to pick it. Under the bonnet is an 8BA Mercury, hopped up with a McCulloch blower. The flathead is backed by a C4 auto and 8in diff and has powered the car on many long runs, including to Queensland. Subtle body mods include Guide headlights, Brizio-style bumpers and US-spec ’37 Ford tail-lights 16. Tony Jenkins’s righteous ’32 tudor, Nailed, was inspired by memories of visiting the speedway as a kid. Powered by a 425ci Buick nailhead, it’s dripping with cool touches, including nerf bars, big Buick drums up front and a Halibrand Champ quick-change out back