NOT everyone is out there LSing the world. Josh O’Brien’s VP ute still relies on plastic power with the assistance of an F-1R ProCharger, and with 500rwkW on tap, it does a good job of keeping the Barra and LS guys honest. 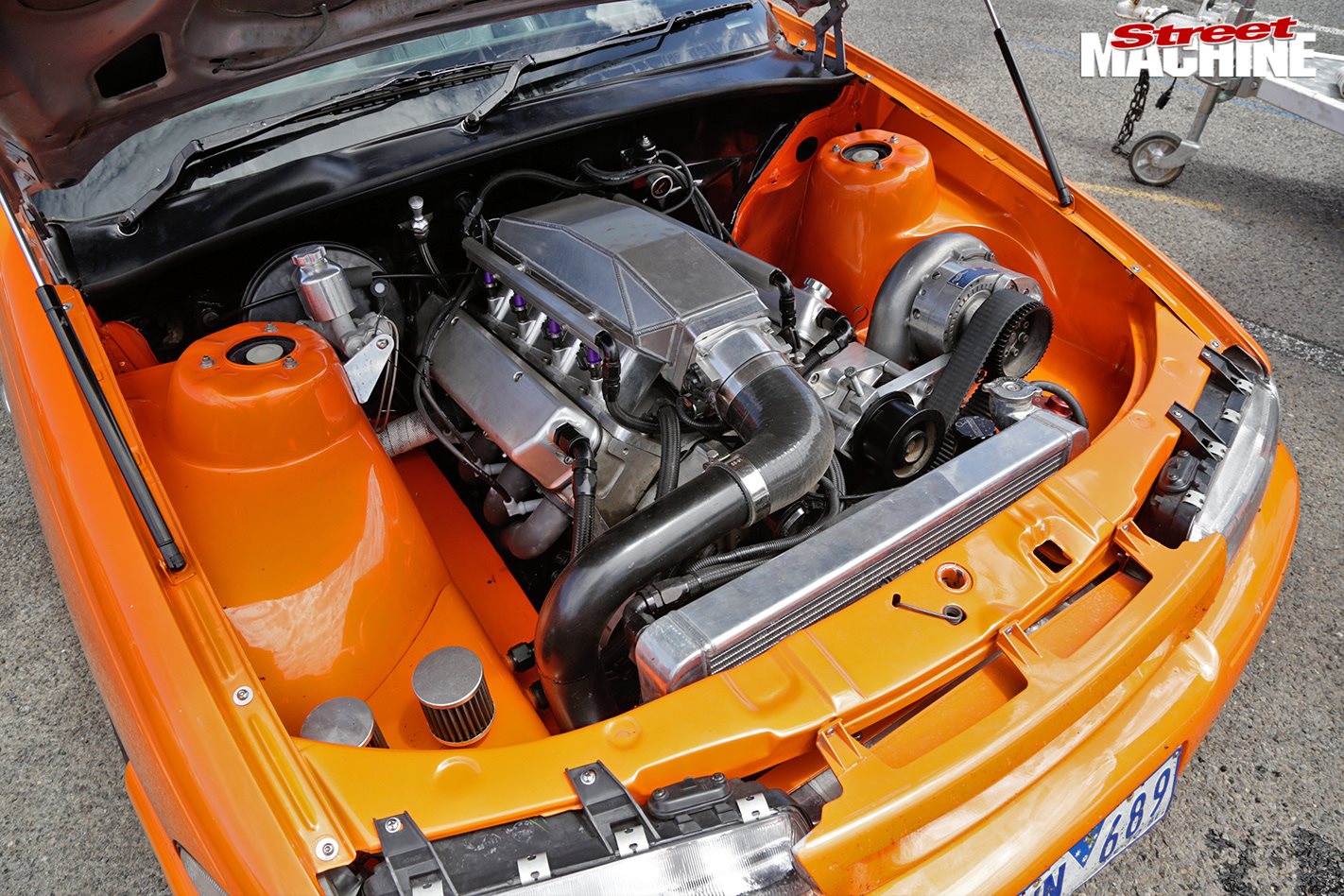 The car is a 355ci Holden V8, but electronically, it’s based on an LS. It runs a reluctor wheel with the dizzy configured as a cam angle sensor, and individual LS1 coil-packs to fire the plugs. The trans is a TH400 with a 5800rpm FTI torque converter and all up the combo is good for a PB of 9.60@145mph. 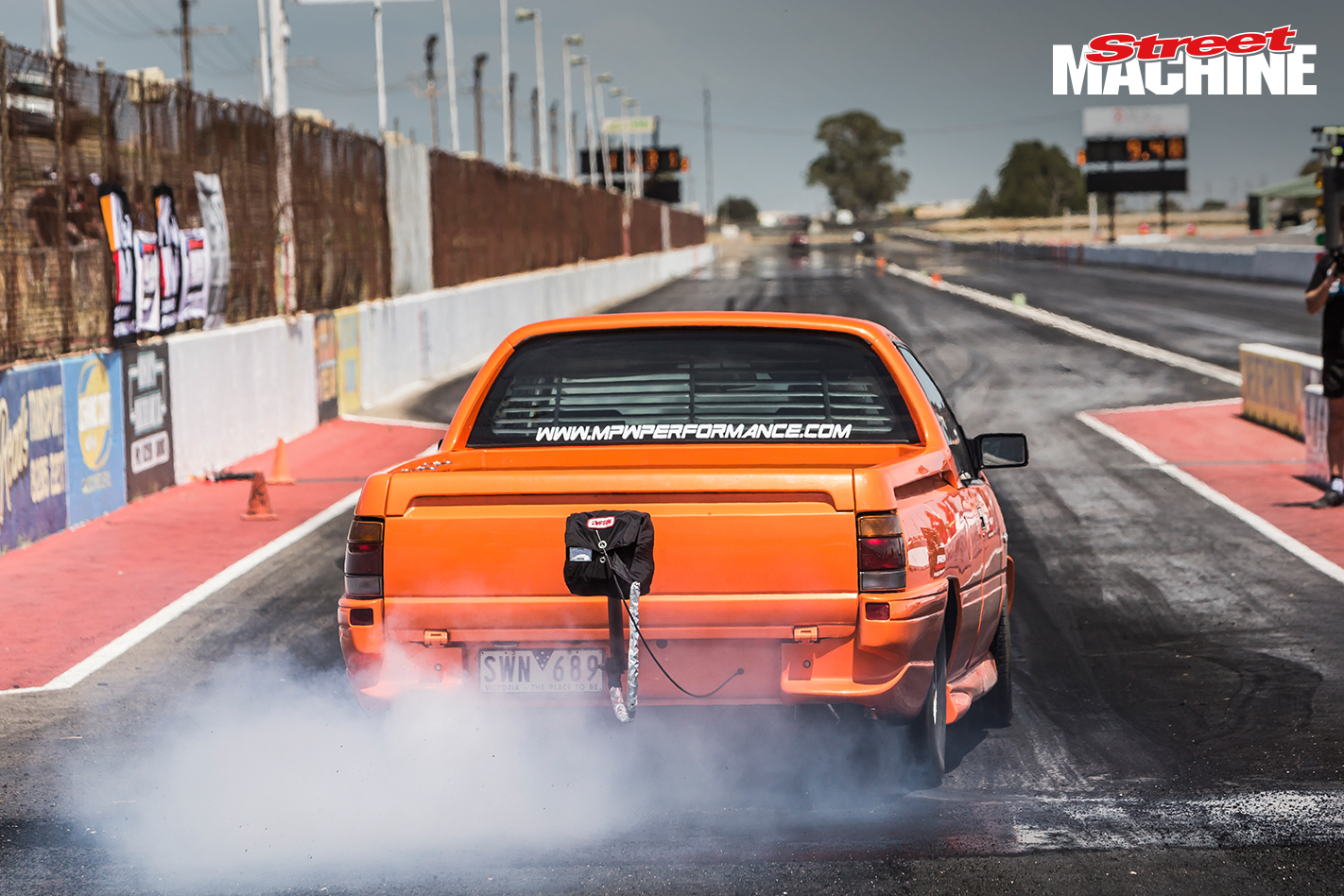 “I’m just a sucker for punishment, I guess!” Josh laughs. “I suppose it’s the sound, but really I just like Holden engines in Holdens and Ford engines in Fords. Who would have thought that it’d become strange to have a Holden V8 in a Commodore? But it is, and it’s getting worse. I’m just bucking the trend, I suppose.” 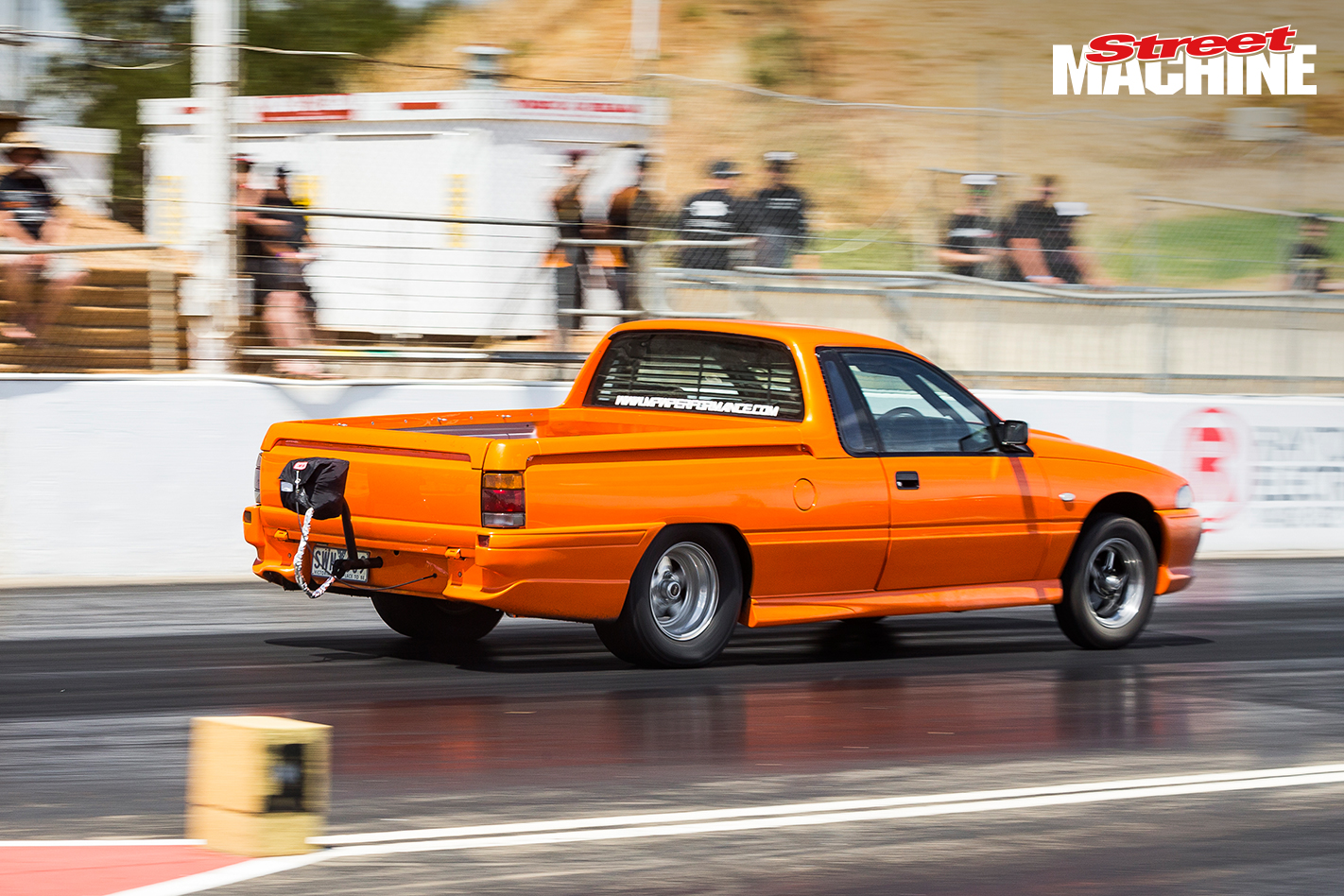 There were a number of healthy Holden-powered rides on Drag Challenge, including defending Outright champion Bubba Medlyn, but of all the finishers, it was Josh’s retina-searing ute that was the quickest. 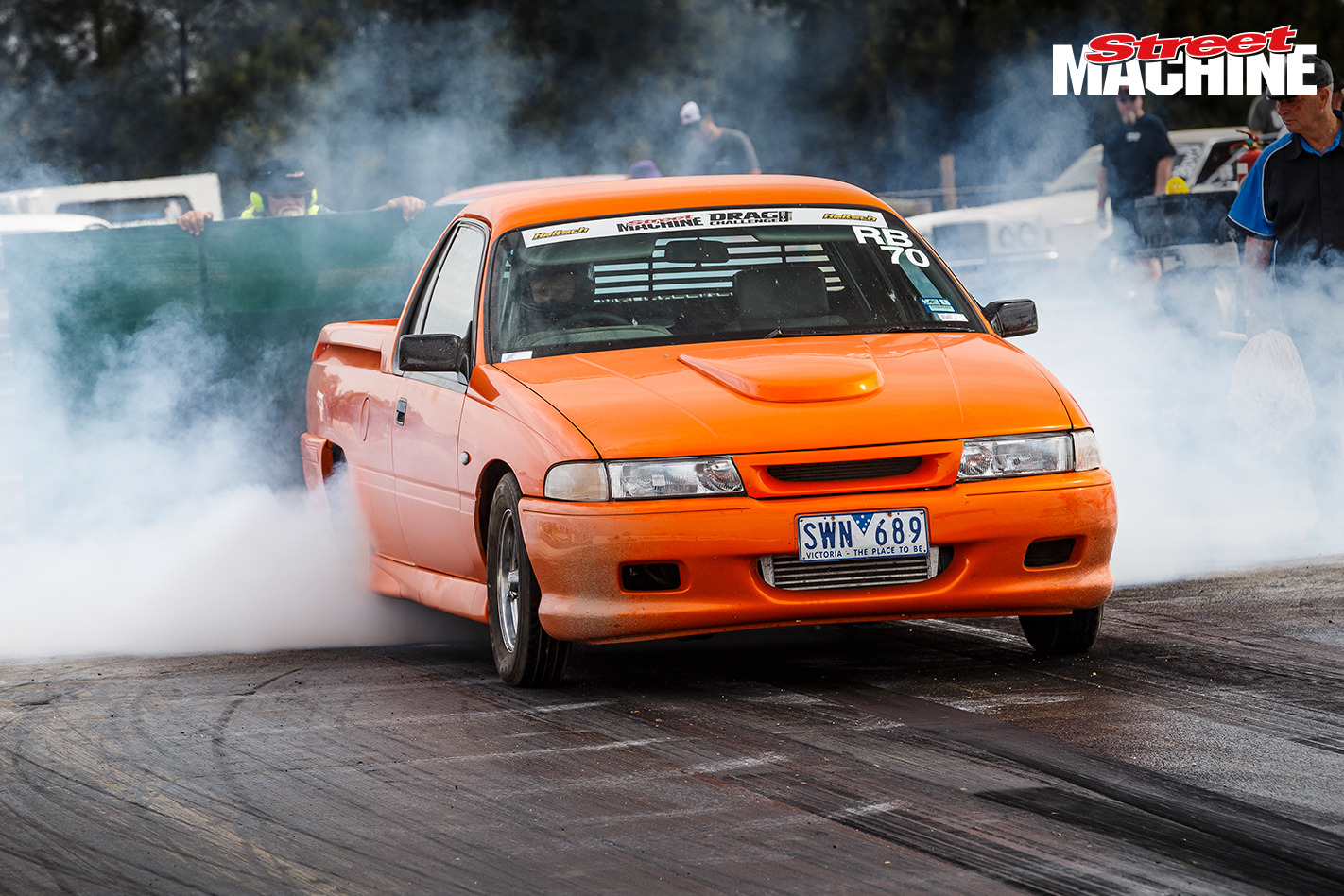 “It was great to win Quickest Holden; I didn’t expect to win anything,” he says. “It’s the first trophy I’ve won on Drag Challenge and the only real goal I had was to finish. We didn’t have many issues at all, and after a tough couple of years at the event that was a nice change.” 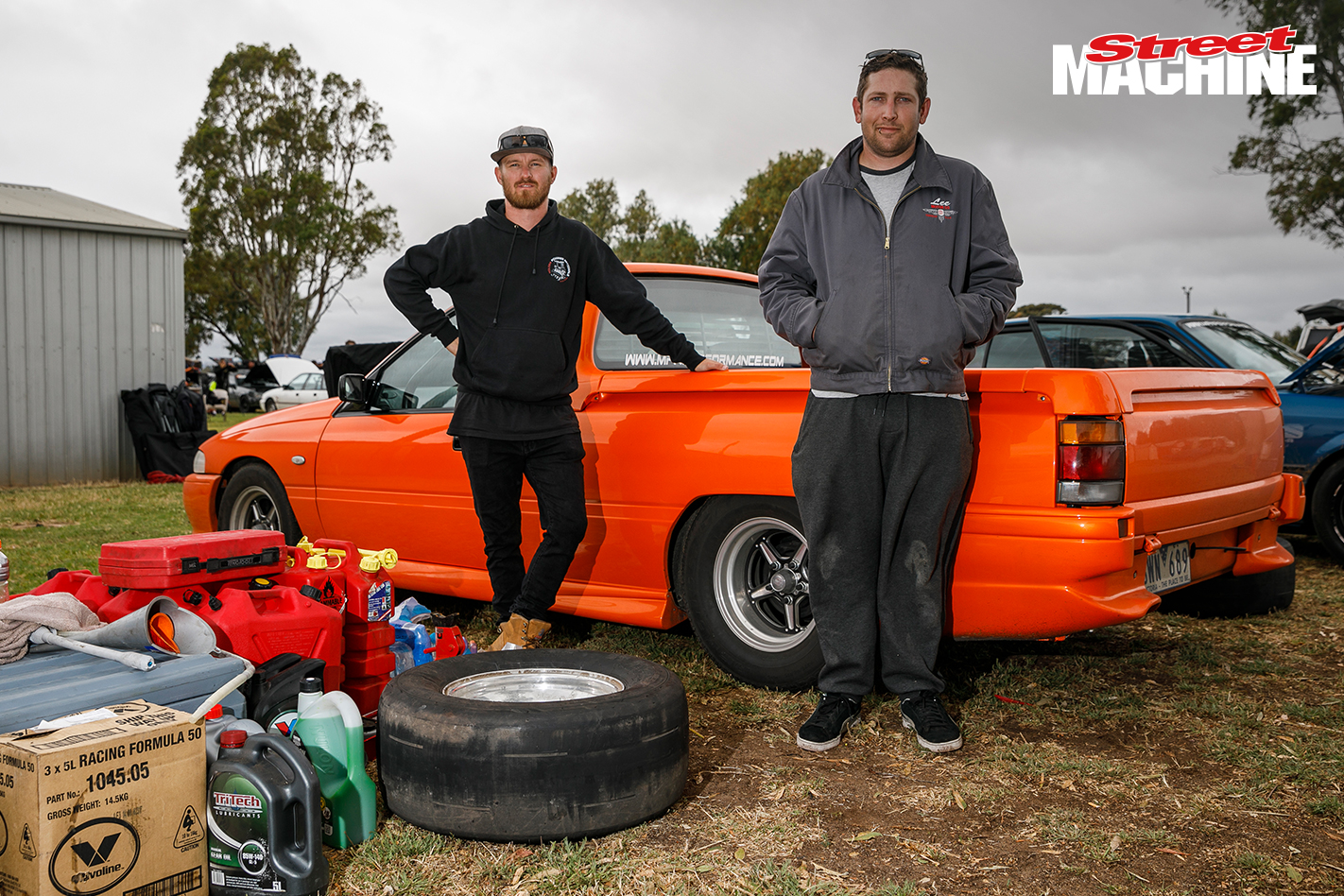 Josh started the week with a 10.01@136mph, and while that was down on the car’s PB both in terms of ET and trap speed, he put it down to the high ambient heat, packed up and moved on. By the end of the week he’d managed to dip into the nines and edge out all the other Holden-powered entires for the win.

Not content to rest on his laurels, Josh has a new engine in the works for the ute. “It’s a Torque Power-block Holden combo,” Josh says. The plan is to stick with the ProCharger, and it will be 400ci and dry-sumped, with a fair bit more boost. It’s an expensive way to go about it, but we can’t all have an LS!”