SCOTTY Levy has had a big week at Drag Challenge with his mates – a real big week. The last time the Mt Evelyn, Victoria fella raced his 1972 Chev El Camino was at Drag Challenge last year (“I’ve been a bit busy,” he said), so he was dead-keen to bring the 406-cube, 472rwhp classic ute – er, pick-up – out for another play.

The week began well, with Scott handing in a 10.9@123mph timeslip after his runs at Calder Park. The car fuelled up at Drag Challenge’s second day at Heathcote, knocking a second from that result, before Scotty – and his mate Rob Colombani in his black Camaro – packed up their tools and began the 400km drive to Mildura.

Then the fun began. Around 11pm, the Street Machine crew spotted the El Camino parked at an odd angle off the road about 15km outside of Mildura. Fearing he’d hit a roo, we pulled over just in time to witness Scotty, Rob and his mates lifting the distributor and manifold to diagnose a dud lifter and scored cam. “We heard a noise and thought: ‘What’s that?’” he said by the roadside. “We were onto [the problem] early but it was already too late.”

Totally junking things with powder from a destroyed roller lifter wouldn’t be something his family would appreciate, so Scott decided to flat-tow the El Camino to Mildura. It was officially out of the running.

But that didn’t dampen his enthusiasm for Drag Challenge one little bit.

“Mate, we bust our arses for a month to get the cars here,” he said the next morning. “If it breaks – you fix it!”

While Drag Challenge continued at Mildura’s eighth-mile strip on Wednesday, the lads spent the morning searching – among Drag Challenge participants, mates of mates, locals in Mildura, anywhere – for a new cam and lifters. “Our Plan B was to buy a second-hand engine from wherever,” Scott said. “All we need is a junker to get us home. The last resort is to send the car home on a trailer or a tilt-tray.”

Eventually the Old Mates’ Network led Scott to a bloke in Melbourne, Greg, who had a 383-cube Chev sitting on the floor in his workshop – and volunteered to drive it up after work. Mildura’s Big4 Deakin caravan park (where we were all staying) offered its workshop and a covered area of concrete to work on. Out-fricken-standing!

Greg arrived at the caravan park with the loaner motor around 10pm on Wednesday night, and a Mildura local who Scott had been put in touch with earlier in the day, Don Mammone, organised an engine hoist.

After diligently dropping the trans and pipes, Scotty’s hurt Chev engine was lifted out and Greg’s loaner lowered in just after midnight.

Greg very thoughtfully brought along a Mooneyham blower, too (well, why not fit a blower?) so the crew worked until around 4am, and after not much more than a power nap, were back into the task by 7am. 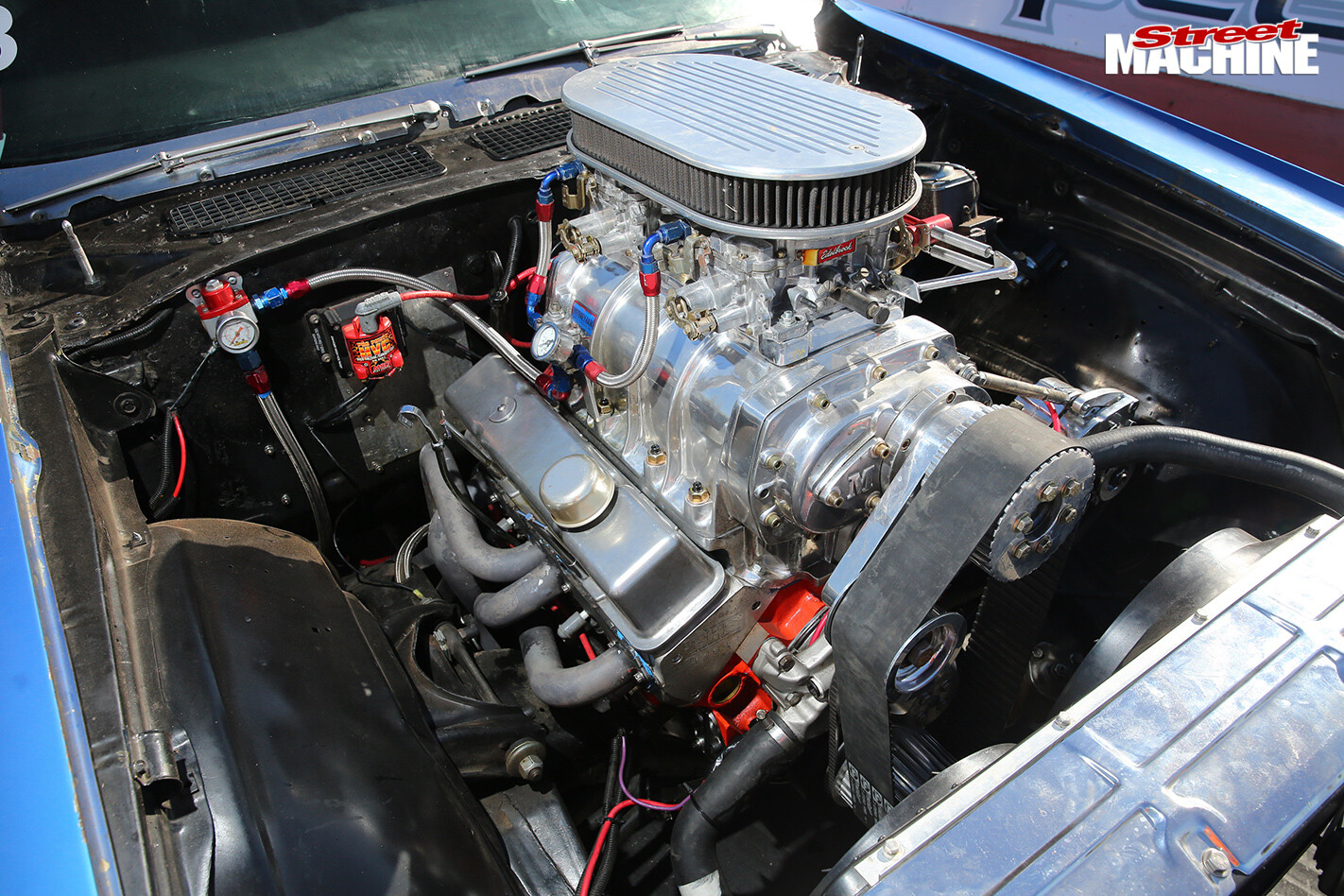 When we left Mildura for the fourth day of Drag Challenge, 280km away at Swan Hill’s brand new dragstrip, the team was adding the finishing touches to the engine swap, such as drilling holes in an angle grinder spanner to create a throttle cable bracket.

With the now-supercharged and bonnet-less (due to the height of the blower) El Camino mobile again, Scott, Rob and the lads set off in convoy for Swan Hill. Sure, Scott and his Chev pick-up were out of the game, but Rob and his Camaro weren’t, so it was critical they be there by 5pm to get a number and remain in contention.

After a blowout on his trailer and running out of fuel – can you believe his Camaro tank ran dry within sight of a servo that he was then able to coast into? – Rob arrived at the track, unhitched his trailer in seconds and got the Camaro to the startline, just one minute before Drag Challenge’s 5pm cut-off.

But Scott and his El Camino arrived about three minutes too late. Heartbreaking!

And on the drive back to Swan Hill, the engine blew!