THEY first closed this section of road, just outside the little town of Casterton in western Victoria, in 1992. Apparently it was the idea of an obviously good bloke named Owen Stevens, who was the head honcho of the local Apex Club back in the day. He figured that letting the revved-up locals race their cars along the straight stretch of bitumen known as Sandford Flat would be a good way for them to have some fun and let off a bit of steam. With that simple idea, the Casterton Street Drags were born. “Owen really pushed to get the event happening,” says Glenn Knight, local Casterton mechanic, member of the Casterton & District Drag Racing Club, and spokesperson for the Casterton Street Drags, which celebrated its 25th running late last year. “As far as I know, it remains the only drag event of its type in Australia.”

Portland’s South Coast Raceway is around an hour and a half away, so the Casterton locals are not exactly marooned without a local drag strip. But after a quarter-century on the calendar, there’s heritage here and the Casterton Street Drags has its own happy, relaxed vibe. 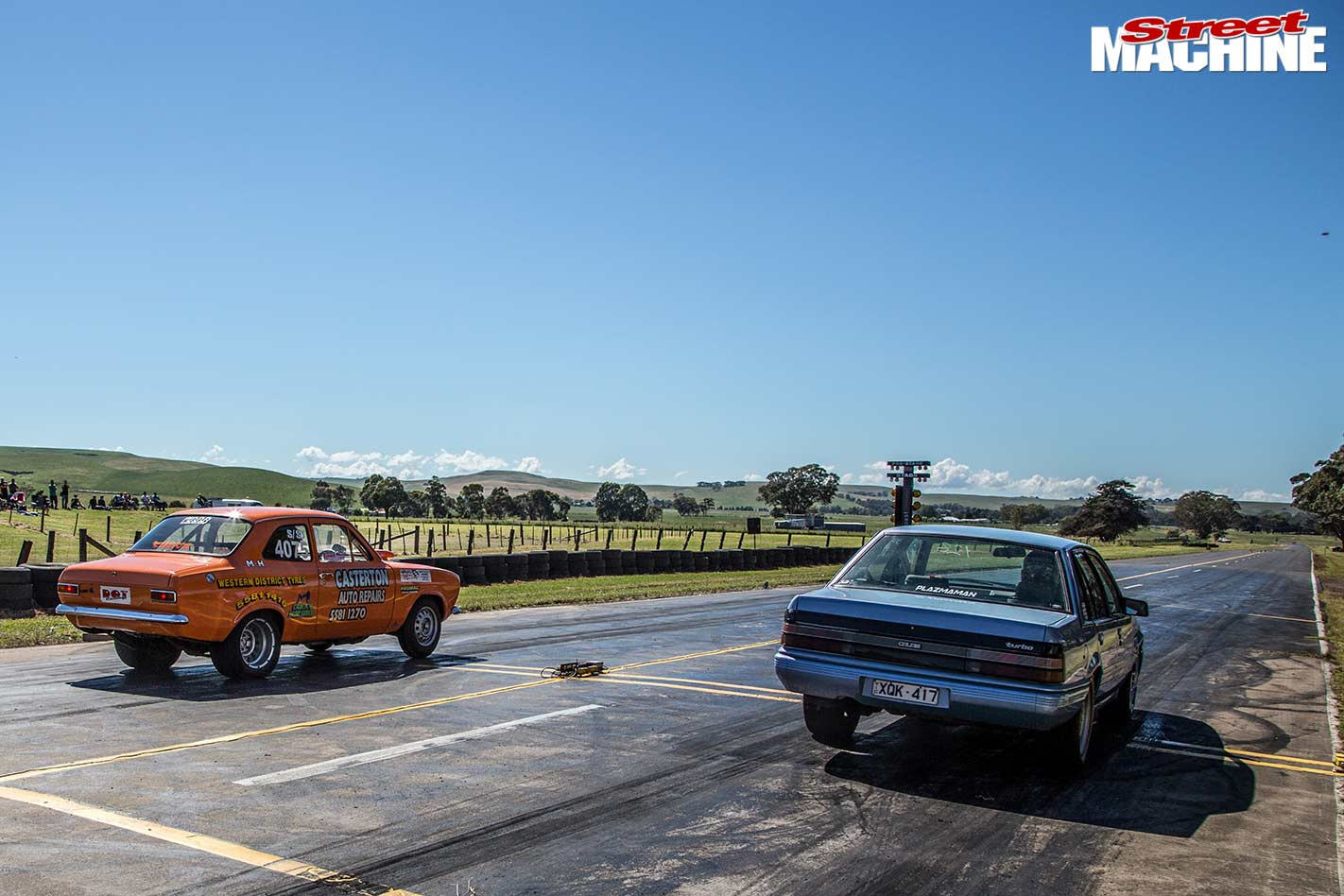 “We always try to hold it in the third weekend in November,” Glenn says, “and it’s always on the same stretch of bitumen. It was single-car passes when it began, and it ran like that for a couple of years. Then some work was done on the road and it became proper drag racing – a side-by-side event.

“It was a two-day event to begin with,” he continues. “The drag club was involved with the Apex Club to run it, but as time went on, the Apex Club wanted to pursue other things so they handed it over to the drag club.” Like many events, Casterton Street Drags has had its good and bad years, but for the past five or six years it’s had a solid total of 100-plus entrants for the drags and burnouts. Street machiners come from all over western Victoria – and as far as Adelaide and Melbourne – for a look, a run or a skid.

Part of the attraction is the fact it’s on a closed public road. Even with the VicRoads and police permits in place, there’s something deliciously naughty about racing along a piece of normal road. “Yeah, it’s pretty cool to come and race your car,” says Glenn, who as well as helping run the event, had his 347 stroker-powered Escort there, driven by mate Chris Logan. “Some blokes will simply turn up in their street car, drop the exhaust, change tyres and race, then drive home again in the afternoon. Good fun. The burnout comp, the boys can come and get a set of tyres off and not get into trouble! There are plenty of people who race at Portland’s South Coast Raceway who began by racing their cars here, and it’s Portland volunteers who run the lights and the timing now.

“It’s great for the town; people stay here on the Friday and Saturday night, they’re spending money in the supermarket and the milk bar, and they buy a few beers and dinner at the pub. An extra few hundred people in town for the weekend is a great little cash splash for towns such as this.

“We get service clubs to do the catering: Rotary has a barbecue, the Lions Club has a food van, and the local café, Silver Beans, does coffee and tucker. Plus there’s the ambos and the CFA people.” Given that the Casterton & District Drag Racing Club has little more than a dozen members, its organisation of the Casterton Street Drags is a damn fine achievement.

We dropped in for a look after a week of action with Street Machine Drag Challenge, and like everyone else, got comfy quickly with a refreshing cold beer and a spot on the grassy spectator mound. The track is an eighth-mile – so speeds don’t get too silly – and there are classes for bikes and cars. Scrutineering begins at 8am, before the time trials to divvy the cars into two classes: Street and Quick 32. The grown-ups are there for the cars and a few cans, but there is a jumping castle and face-painting for the kids. And if you want a break from the smoke or the noise, you can go wander around the show ’n’ shine. After racing finishes, the day is rounded out with the burnouts.

Don’t expect Summernats or a B&S ball, but with some ripper grassroots racing action all day, a few drinks to be enjoyed, friendly people and even some terrific old buildings to look at – and drink in – it’s well worth getting a bunch of mates together and adding the Casterton Street Drags to your list of weekend road-trip destinations. 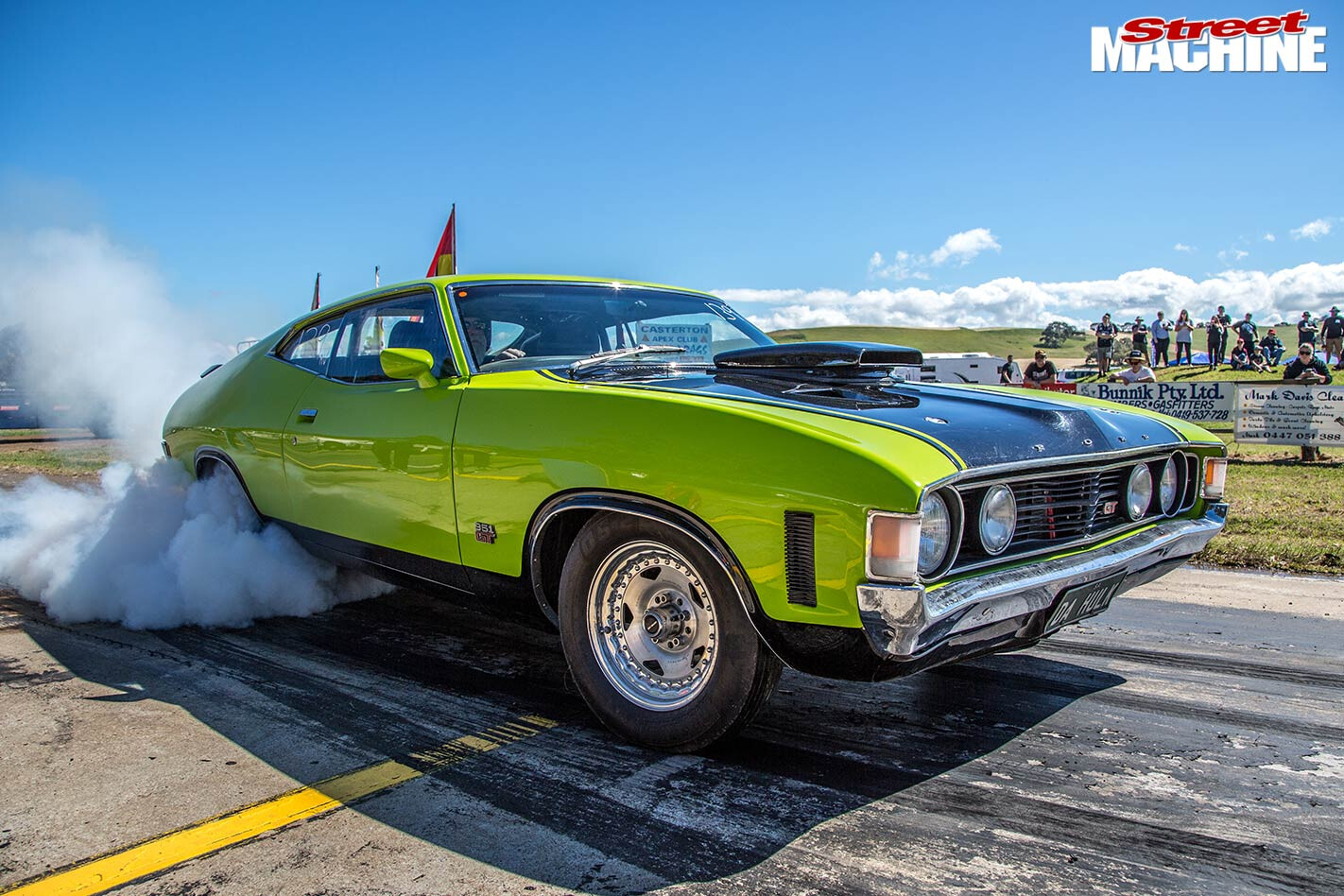 1. Gary’s gorgeous XA coupe rocks an engine built to withstand the rigours of Daytona – it makes 750hp at 8600rpm, and that’s without the 250-shot! The donk features a few pretty exotic bits like titanium rods and Bennett Racing heads, and is backed up by a Jerico dog box. “It went 6.60 here a few years ago, but it only gets run once a year,” Gary said. 2. Daniel and Ted Gay were racing the Torana that Daniel has owned for the past 12 years. “The best I’ve done today is a 7.1, but it broke out on a 6.8 dial-in last year,” he said. Power comes from a 355 Holden with Dave Bennett heads and a Strip Master intake, backed by a TH400 with a 5000rpm converter and a 9in. 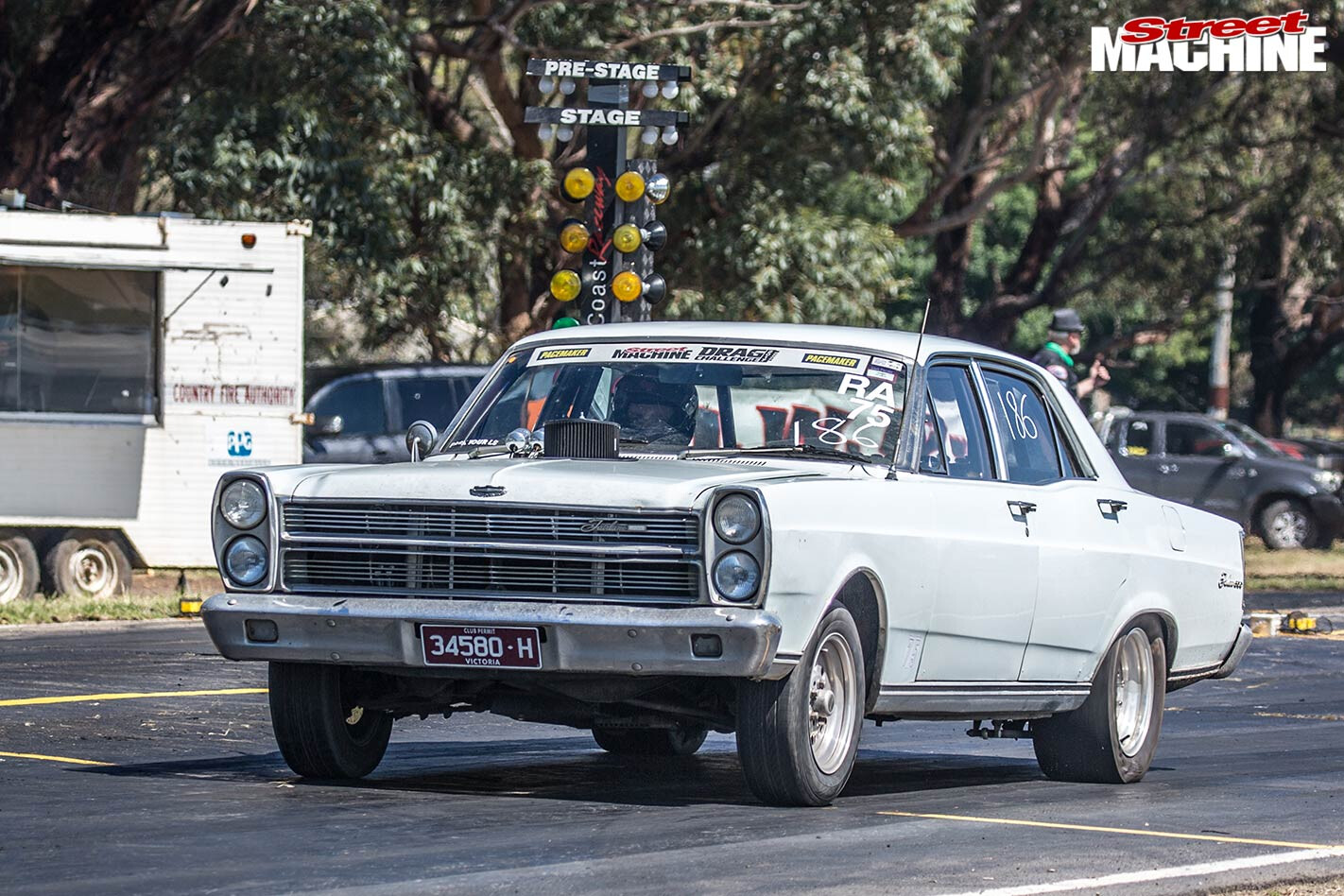 3. Tim Ackland had just returned from Street Machine Drag Challenge, where he ran a best of 10.70 at Swan Hill in his 406 Clevo-powered ZC Fairlane, but he struggled to get traction at Casterton. 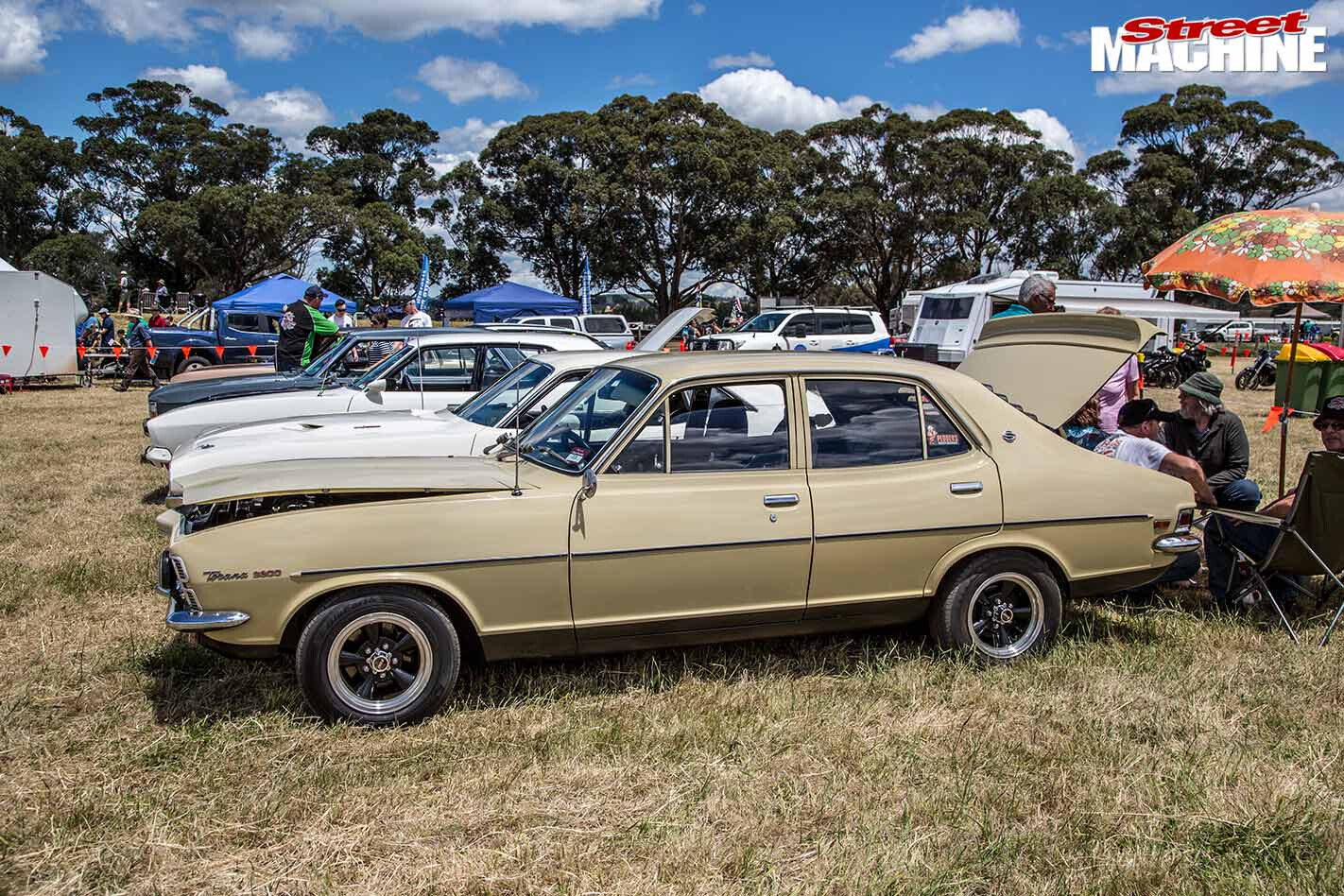 4. Alan Taylor bought his Torry brand new in 1970, and proudly displayed the receipt on the dash to prove it! The engine was removed and used on his farm to power a generator for several years, but long after he’d sold the farm, its new owner let Alan have it back. Now this ridgy-didge cruiser is only used for club runs. 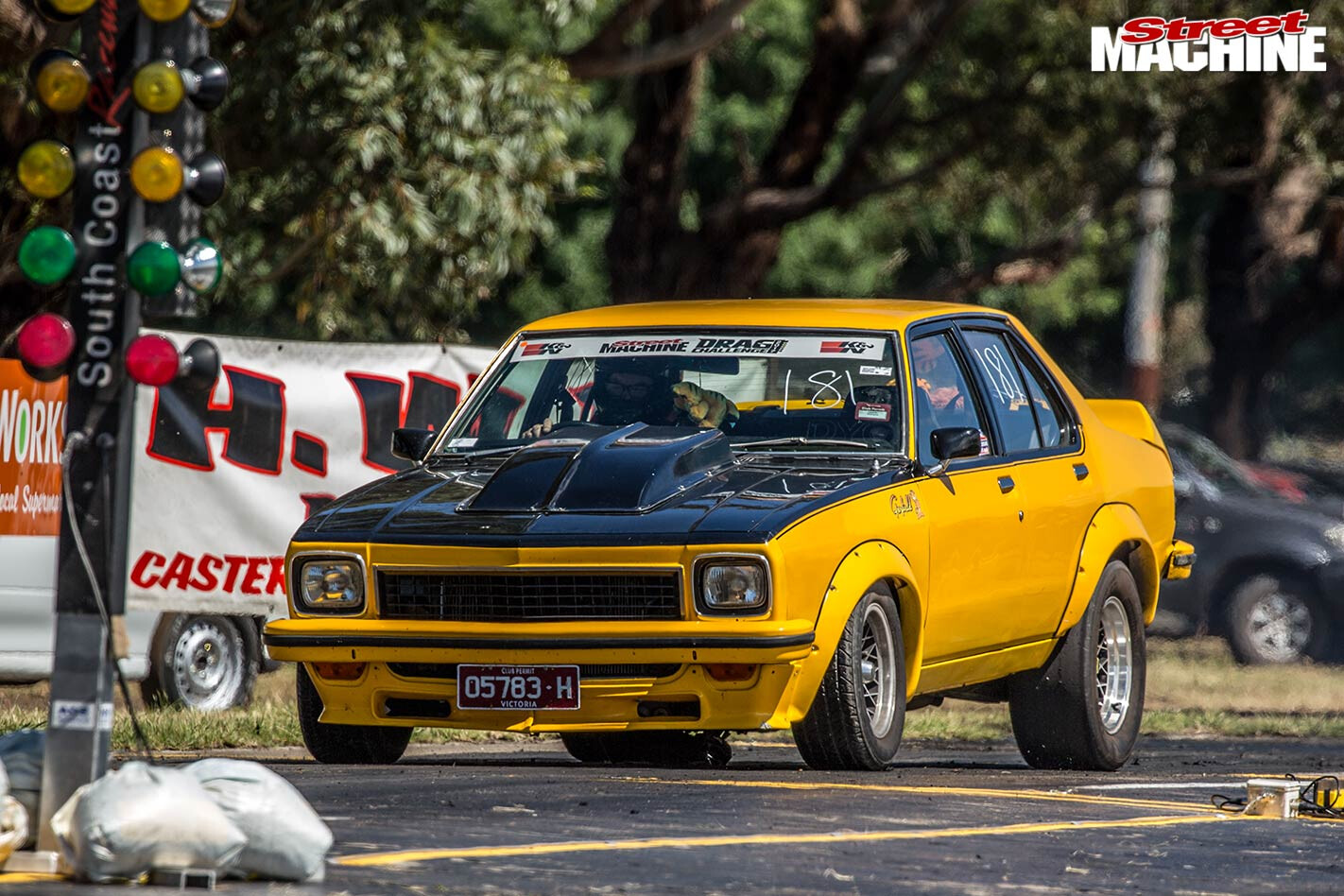 5. Instead of driving straight home from Adelaide after running 11s all week at SM Drag Challenge, Portland’s Rod Kerr rattled off a few low-7sec runs at Casterton in his 550hp stroked 355 Holden-powered Torana. Legend! 6. Ken’s done practically everything on his glorious Prem himself, bar the paint. “I bought it 12 years ago and everything was knackered – I’ve rebuilt the front end, rear end, engine,” he said. The 383 Chev under the bonnet’s a good bit of gear, but the TH350’s on the way out, so Ken elected not to race it this year. 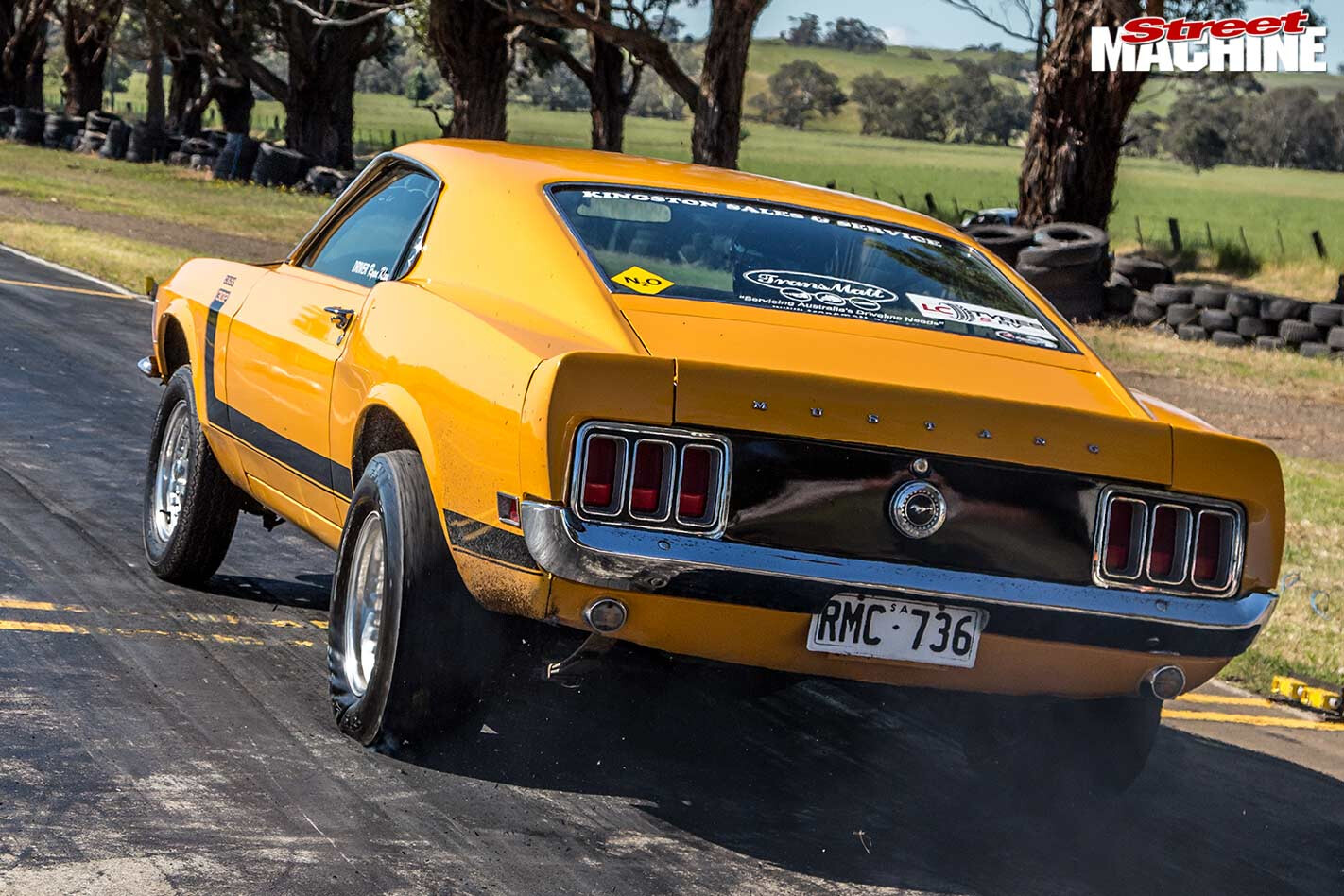 7. Ryan Klum’s mate owns this tough ’70 Mustang, but the motor’s all Ryan’s. It runs a stock 351 Clevo bottom end and sucks a 150-shot through Trickflow heads. “It’s built out of second-hand parts I had in the shed,” Ryan said. “I’m just waiting for it to blow up – I’ve been racing it for two years with the gas on it!” 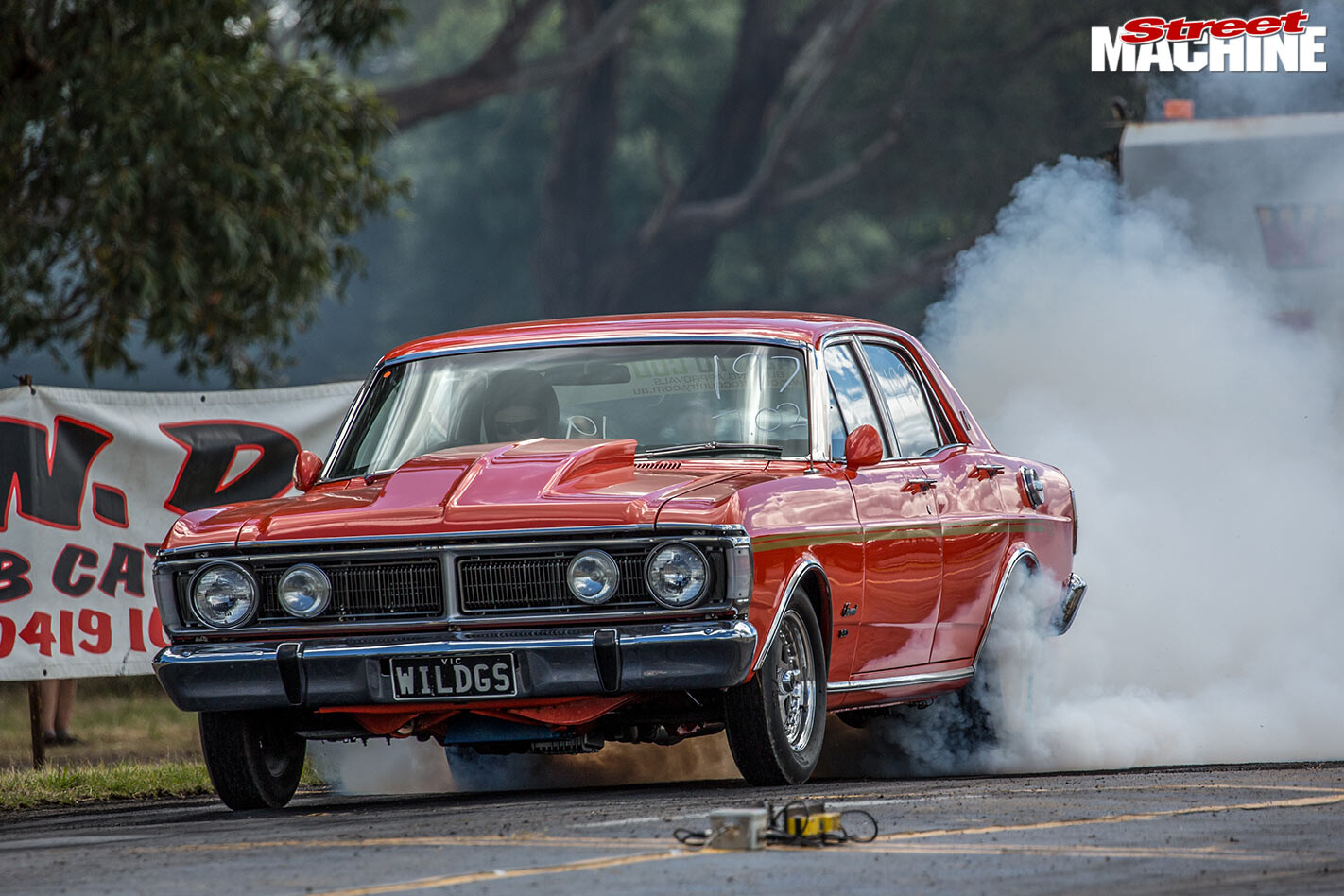 8. Scott Reilly has owned his immaculate 395 Clevo-powered Fairmont for over 20 years, and had a great time campaigning it at Casterton. “I ran a 7.0 on a 1.8sec 60ft when the fuel pump died at three-quarter track, so it’s gonna go more than that,” Scott said. 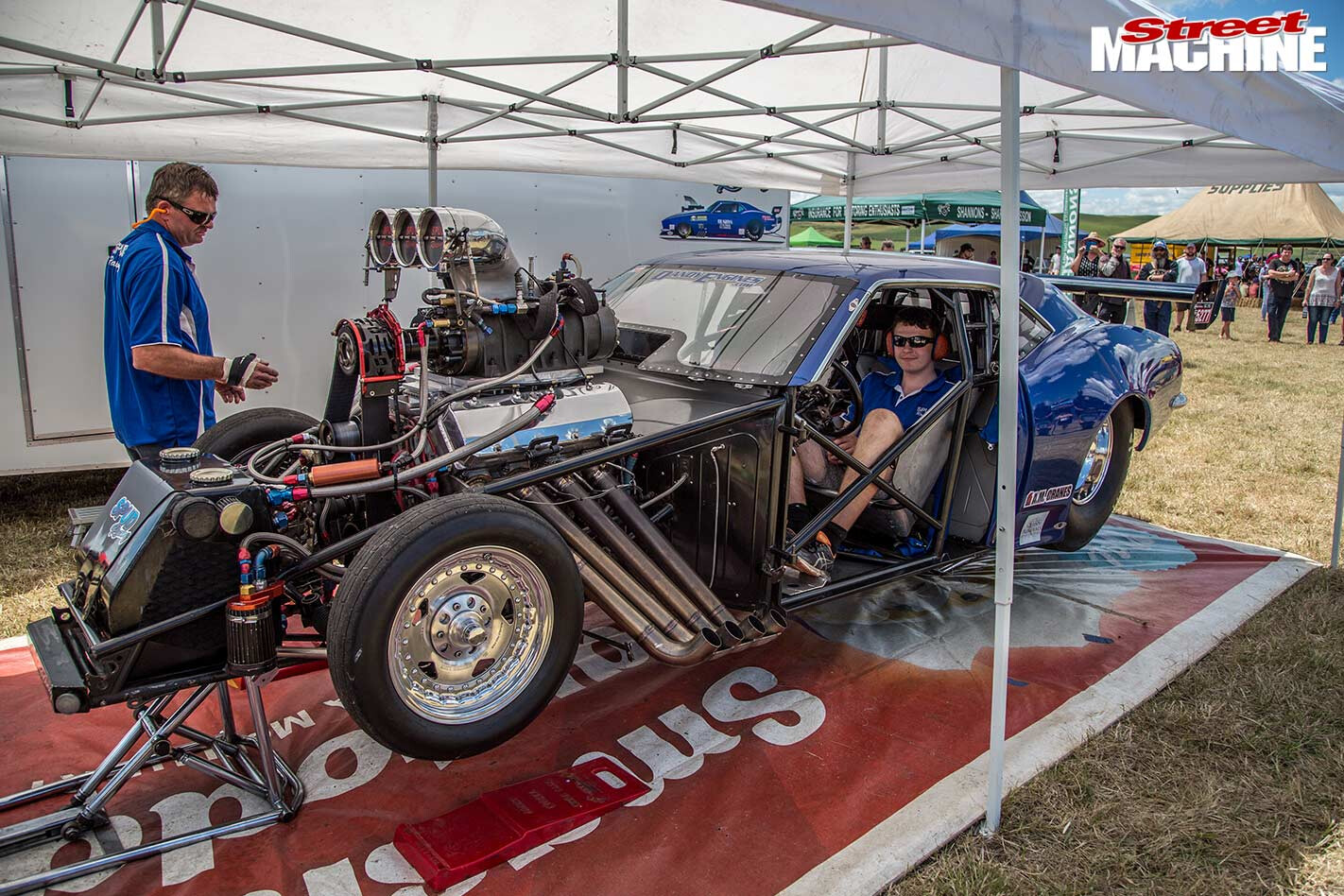 9. Justin Russell from Spud Racing competes in ANDRA’s Supercharged Outlaws series, and had his car at Casterton to show everyone what 2500hp looks and sounds like! 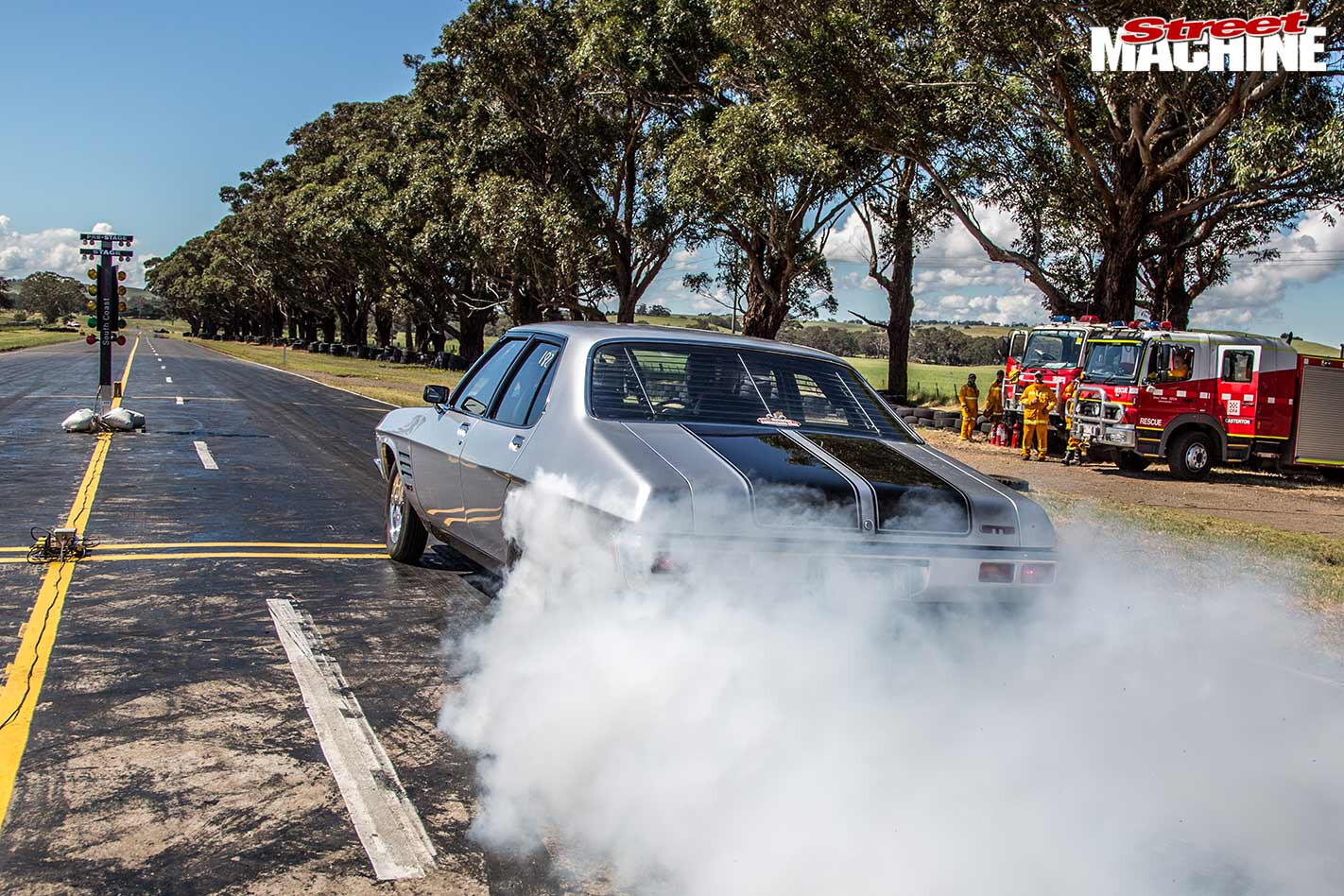 10. Phil Gordon snatched third place at King Of The Street late last year in his 598ci BBC-motivated HQ, and has run a PB of 7.1@99mph over the eighth. 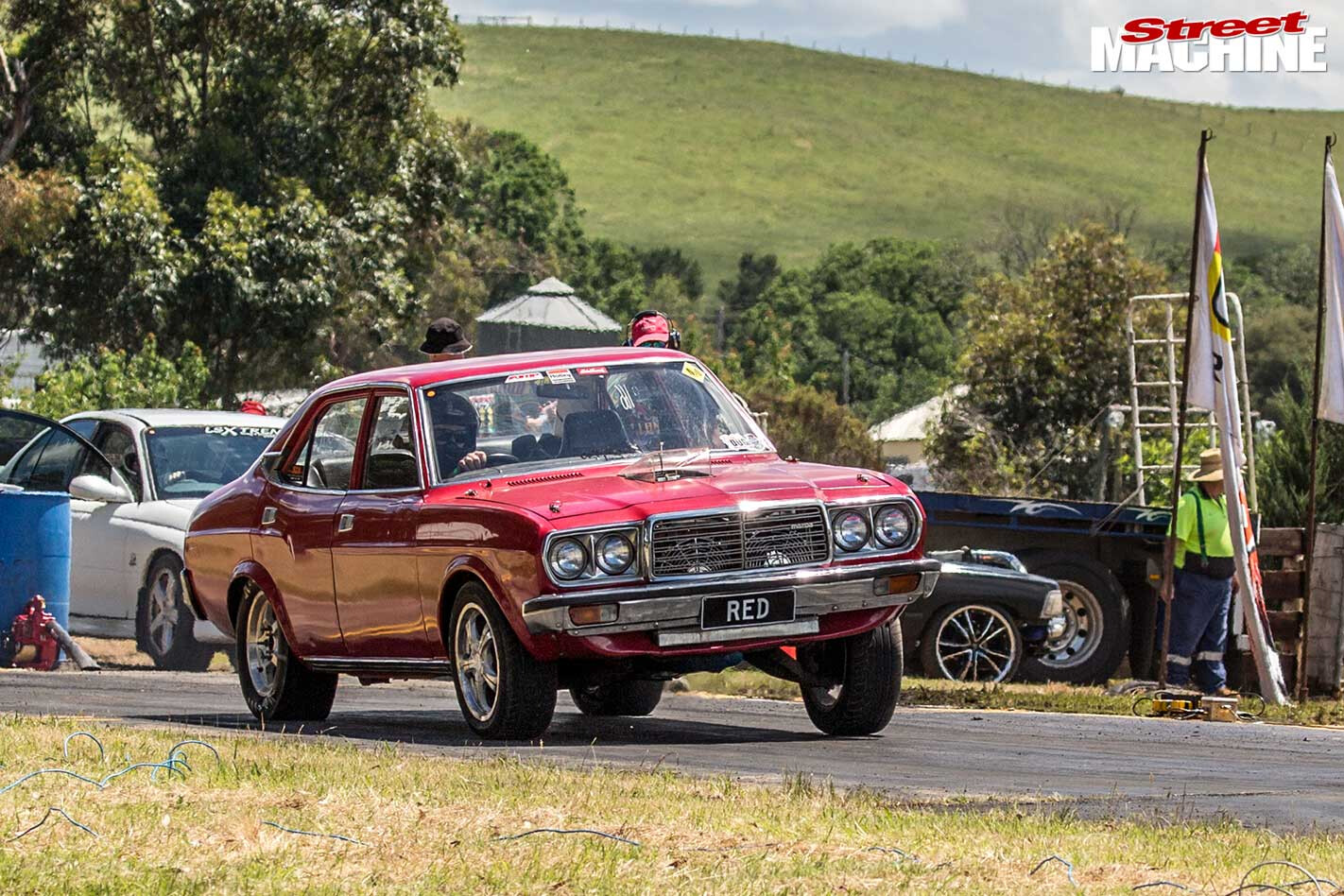 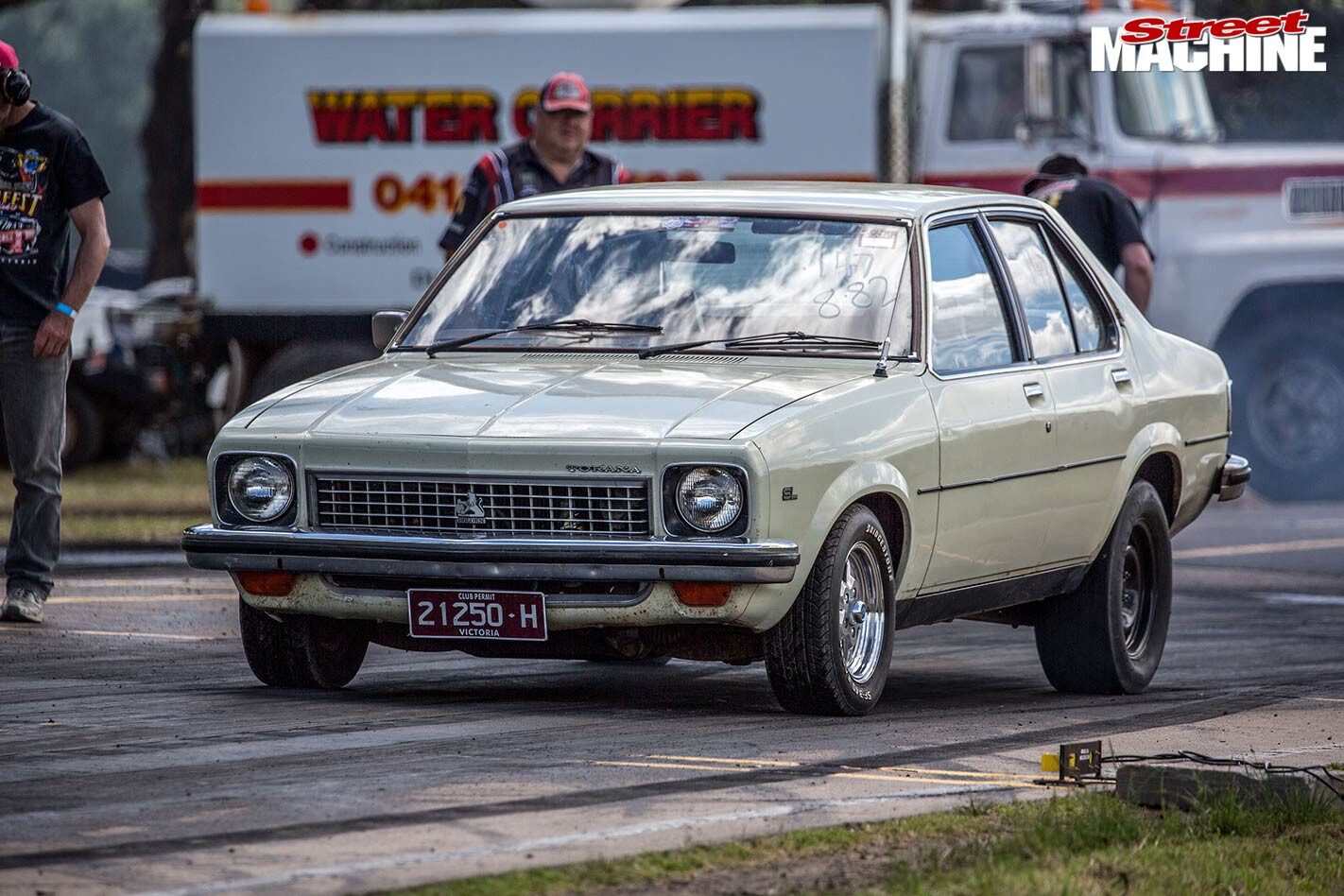