The major highlight for many was the QLD debut of the all-conquering XBOSS Falcon Hardtop of Chris and Colleen Bitmead that continued its tour of the country and its winning ways, nabbing the coveted People’s Choice, Top Custom, Best Undercarriage and Best Custom Paint awards, along with a spot in the Top Ten. Chris and Colleen were also worthy recipients of the Milty Award – an honour named after legendary commentary and QLD car show stalwart, the late Milton Adey, presented to the Bitmeads for most outstanding car of the show. Another interstate debut was that of Adam and Kylie Perry who bought their wild Tailspin FB Holden to Brisbane and took home Top Street Machine, Best Interior and Best Displayed Vehicle for their efforts; American Hot Rod’s Bernt Karlsson was a special guest at this year’s event and awarded the Perrys with his pick for favourite car of the show.

Nathan Walter’s jaw-dropping Cobalt Blue SS Torana Hatch was the subject of an official unveil and scored a Meguiar’s Superstars Invitation for later this year - this supercharged 406-cubed LX is well worth a spot on your to-see list for any folks attending the Sydney event. 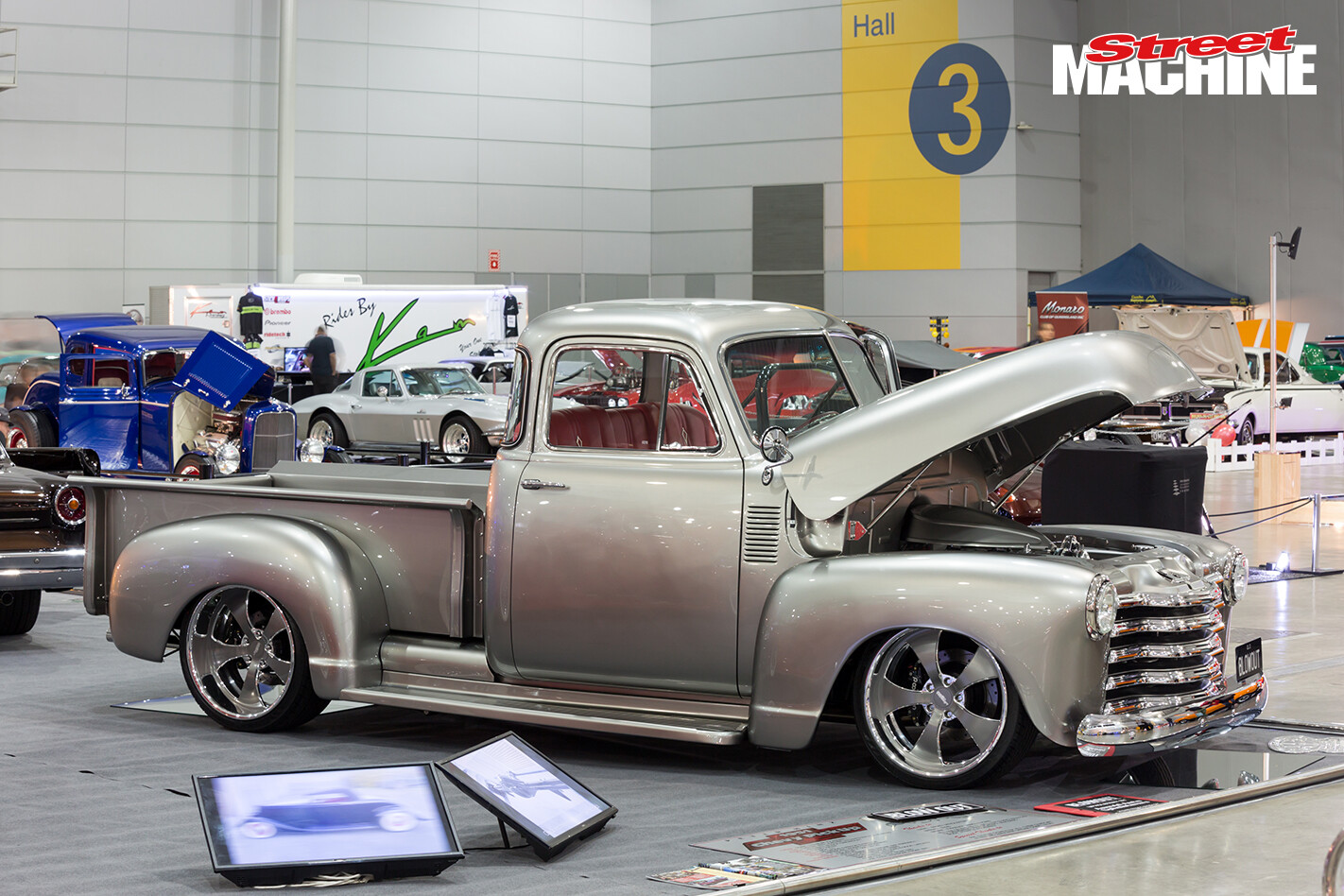 But it wasn’t all about knockout street machines at this year’s event, Queenslander Graeme Urquhart’s beautiful 1940 Ford Cabriolet was one of a swag of high-end pre-48 builds putting the ‘hot rod’ back into Hot Rod Show, and was tough to beat taking out Top Roadster, Best Standard Paint, best Interior, Best Engine Compartment and Best Undercarriage. 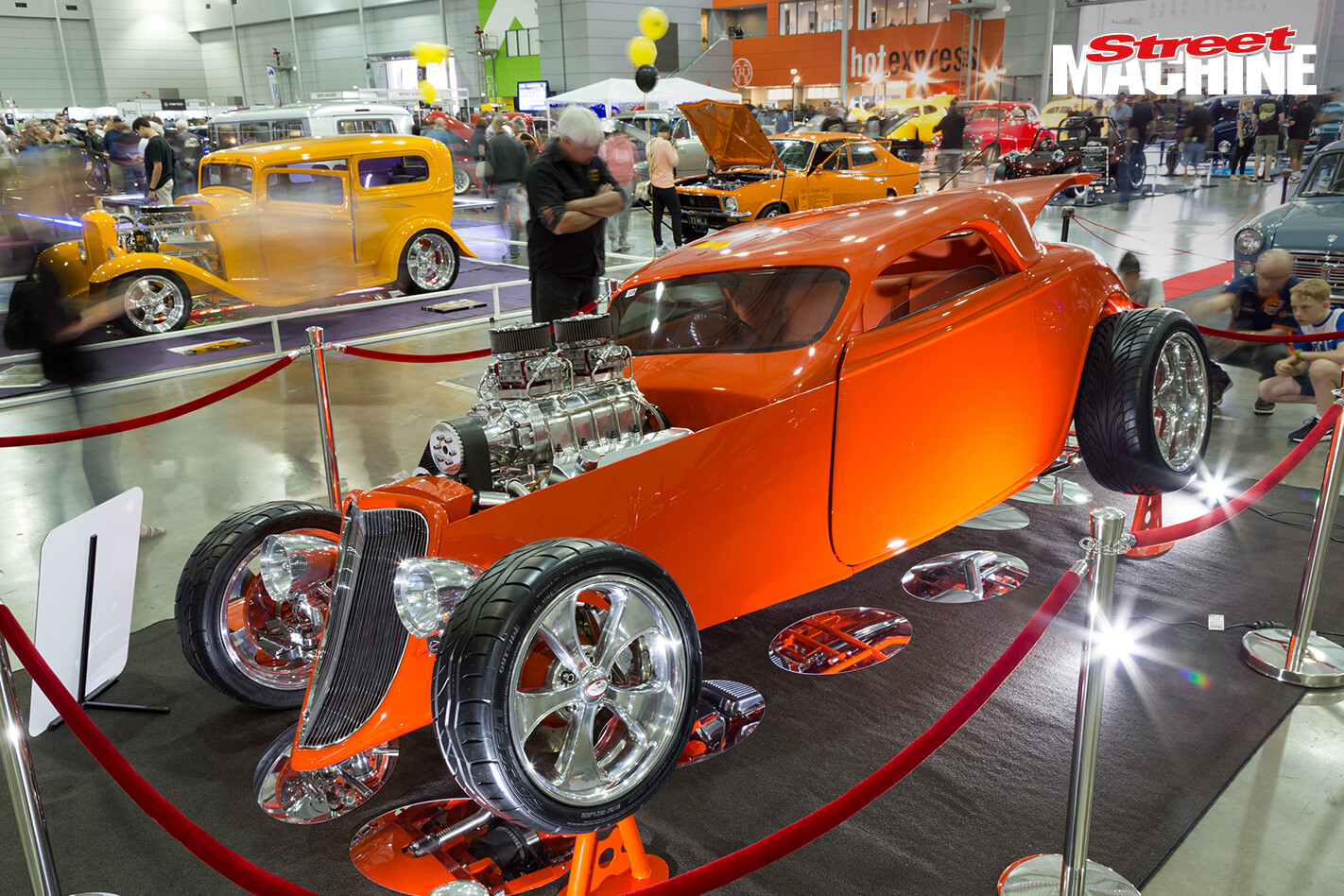 ‘The Carrot Gold Coupe’ is an apt name for John Thompson’s swoopy Ford show rod; the carrot gold hue lathering a Rat’s Glass 1933 Speedstar body. A Rod City Repros chassis has been stretched 4.5 inches and fitted with independent suspension front and rear, while motivation is none other than a blown 454-cube big-block Chev, sure to make easy mincing of those rear 295s wrapping Boyd Magneto rims. The coupe took out first place in the Showcars class Car of the show for me was Jon & Debbie Bridge’s Crème Brulee ’32 Roadster, finished in Classique Cream with a black leather interior and wheels from Custom Wires. This nicely appointed hot rod comfortably mixes new and old styling cues and has plenty of go thanks to worked 302ci Windsor power Another elite showstopper and former SM Feb ‘16 cover car, Mal Apps’s FC journeyed north from Melbourne for the weekend. Mal’s FC was five years in the making, and the 350 Chev-powered early girl is incredibly detailed inside and out. A perfect stance combined with myriad cool details and side-swing bonnet rates this FC as one of the country’s best Holdens The Ol’ School Garage at nearby Hillcrest always has something cool in store and this pearl white EH is no shrinking violet, packing a healthy blown small block Chev for power, backed a TH400 trans and four-link rear end. Foose 17-inch wheels and leather trim add a classy edge to this humble Aussie icon Torana hatchbacks seem to be enjoying a resurgence as the current hot ticket body style, and this Morpheus coloured SS built by Jon and Cherilyn Kendall drew a healthy crowd all weekend. The fantastic plastic 308 has been stretched to 355ci by Jack Bros and retains its Trimatic transmission, while the rear end has been upgraded to an Altra 9 Ford nine-inch 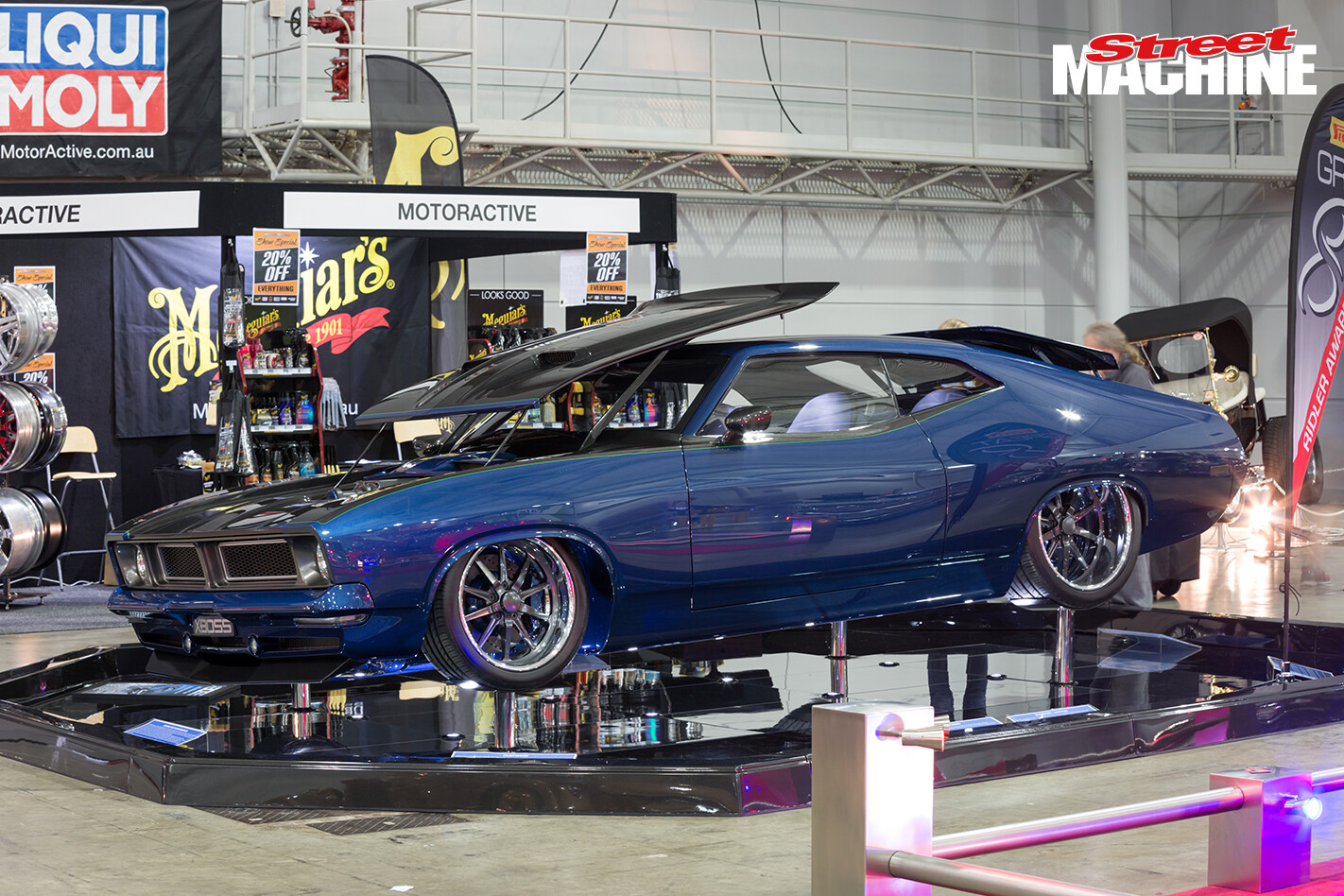 What can be said of Chris and Colleen Bitmead’s world-beating XBOSS hardtop that hasn’t already been stated? The car is quite well-travelled these days; after returning from Detroit Autorama it has traversed the length and breadth of this wide, brown land. Following a successful showing at the Queensland Hot Rod Show, it has now won car of show in every Australian state! 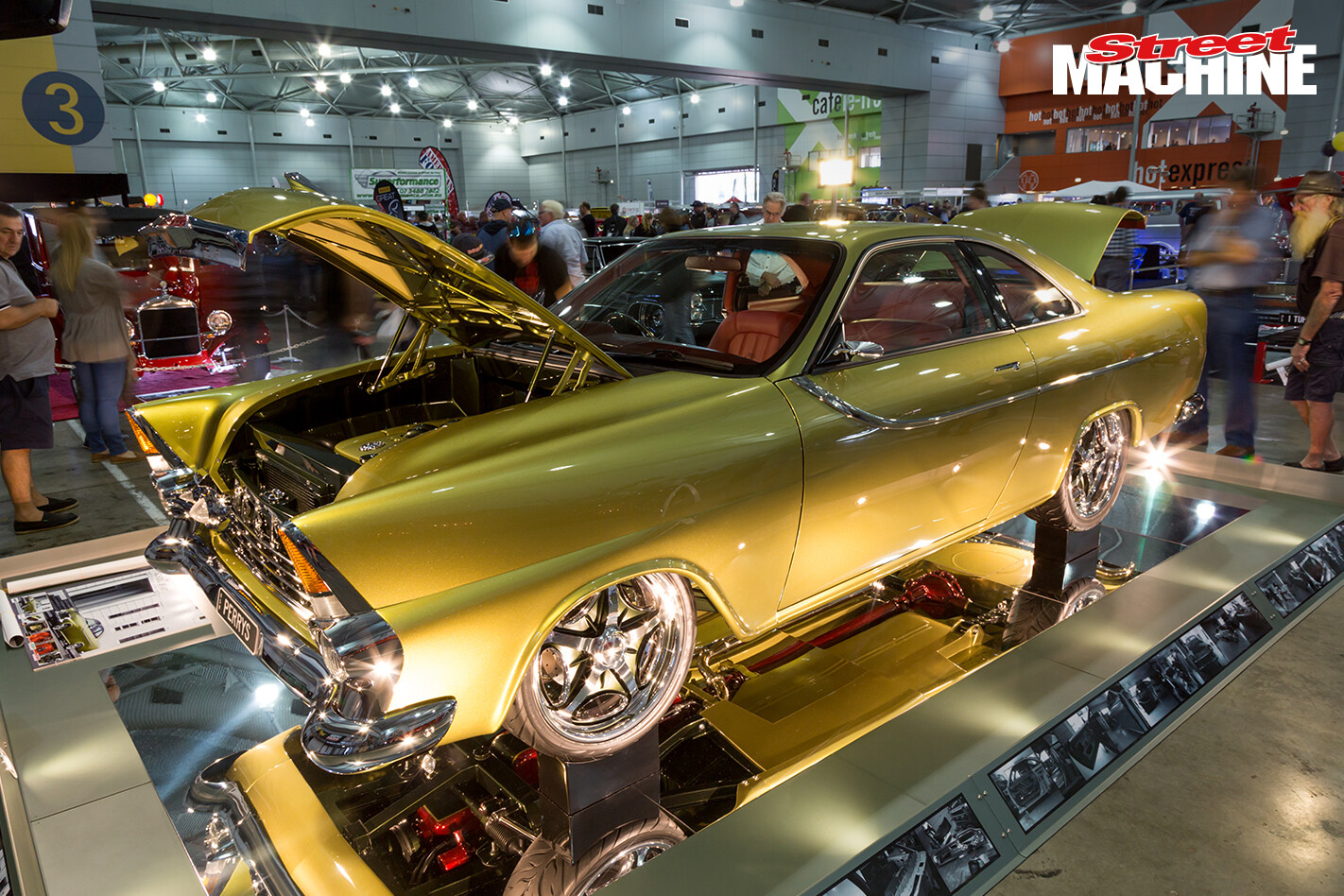 Adam and Kylie Perry were in a spin after their stunningly crafted custom Holden took out Top Street Machine at the Queensland Hot Rod Show. The award topped off a great trophy haul for Tailspin, which included Best Interior, Best Displayed Vehicle, and a Top Ten placing Nathan Walter’s SS Torana Hatch made its debut at the event, rocking a 700hp blown 406ci small-block Chev backed by a T56 Magnum 6-speed, and rolling on delightfully old-school Simmons wheels. Built by Pat’s Pro Restos, the clinically clean hatch picked up a Meguiar’s Superstars Invitation, meaning you’ll get the chance to suss it out at Motorex 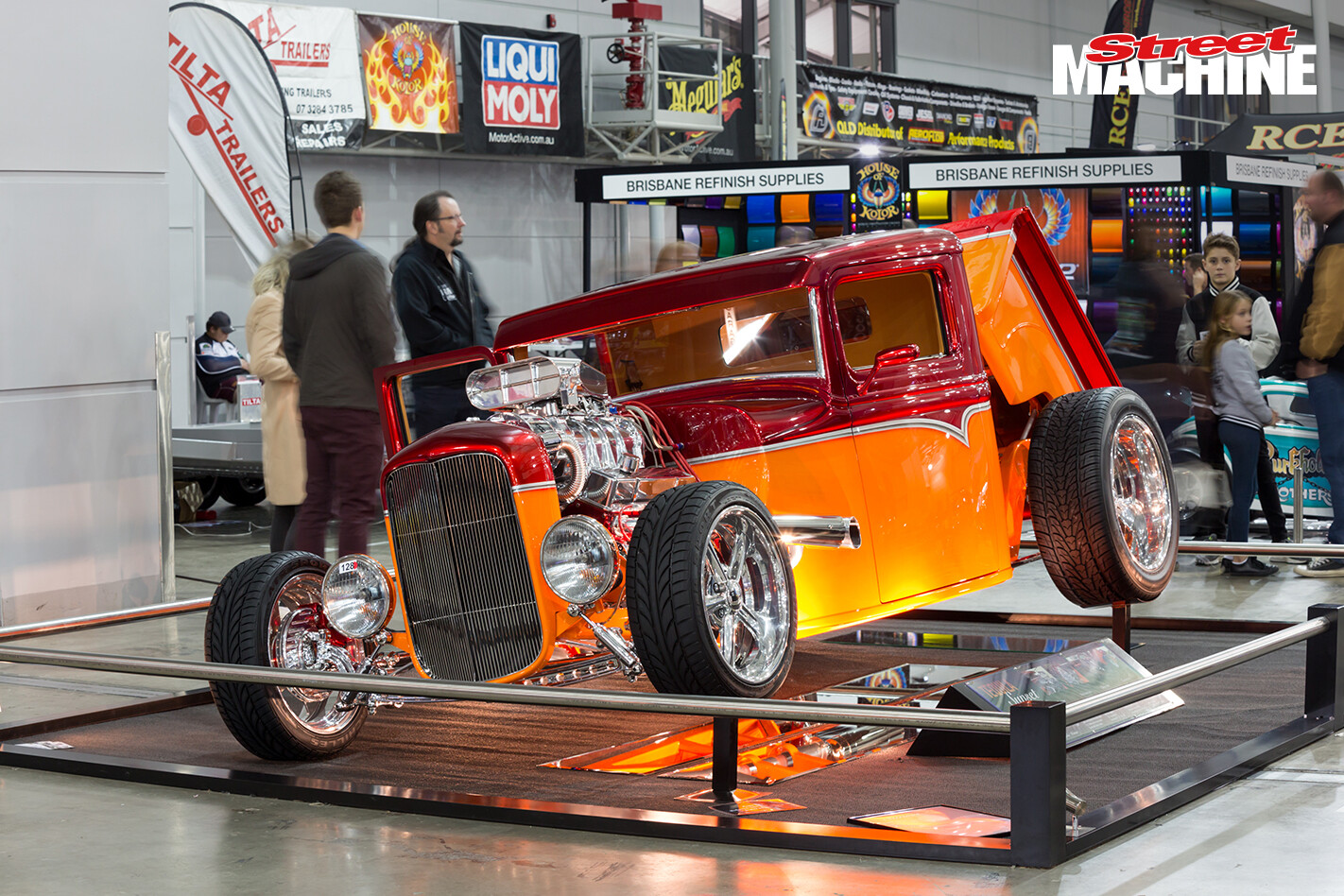 Long-time Street Machine readers will likely be familiar with Rick Werner's work. His flamed ’32 coupe was once brandished across the cover of Street Machine Hot Rod, and his wild ’65 Corvette has also copped a feature in our pages. This ’32 pick-up, dubbed Tequila Sunset, is his latest weapon