FRIDAY night saw the biggest Meguiar's Great Uncover, with 17 cars unveiled to the public at Street Machine Summernats 32. We talked to all of the owners to give you the inside line on their creations. Enjoy! 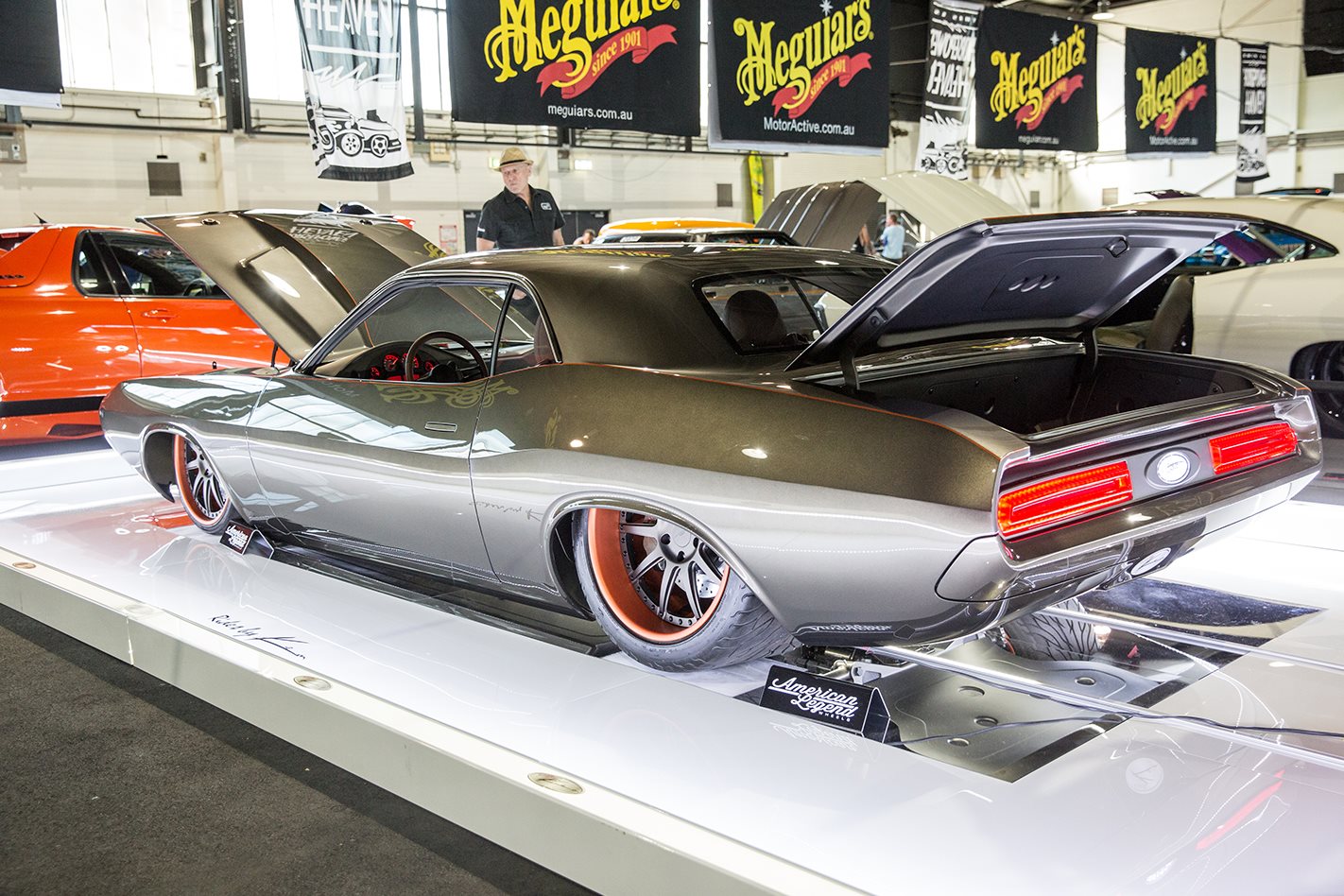 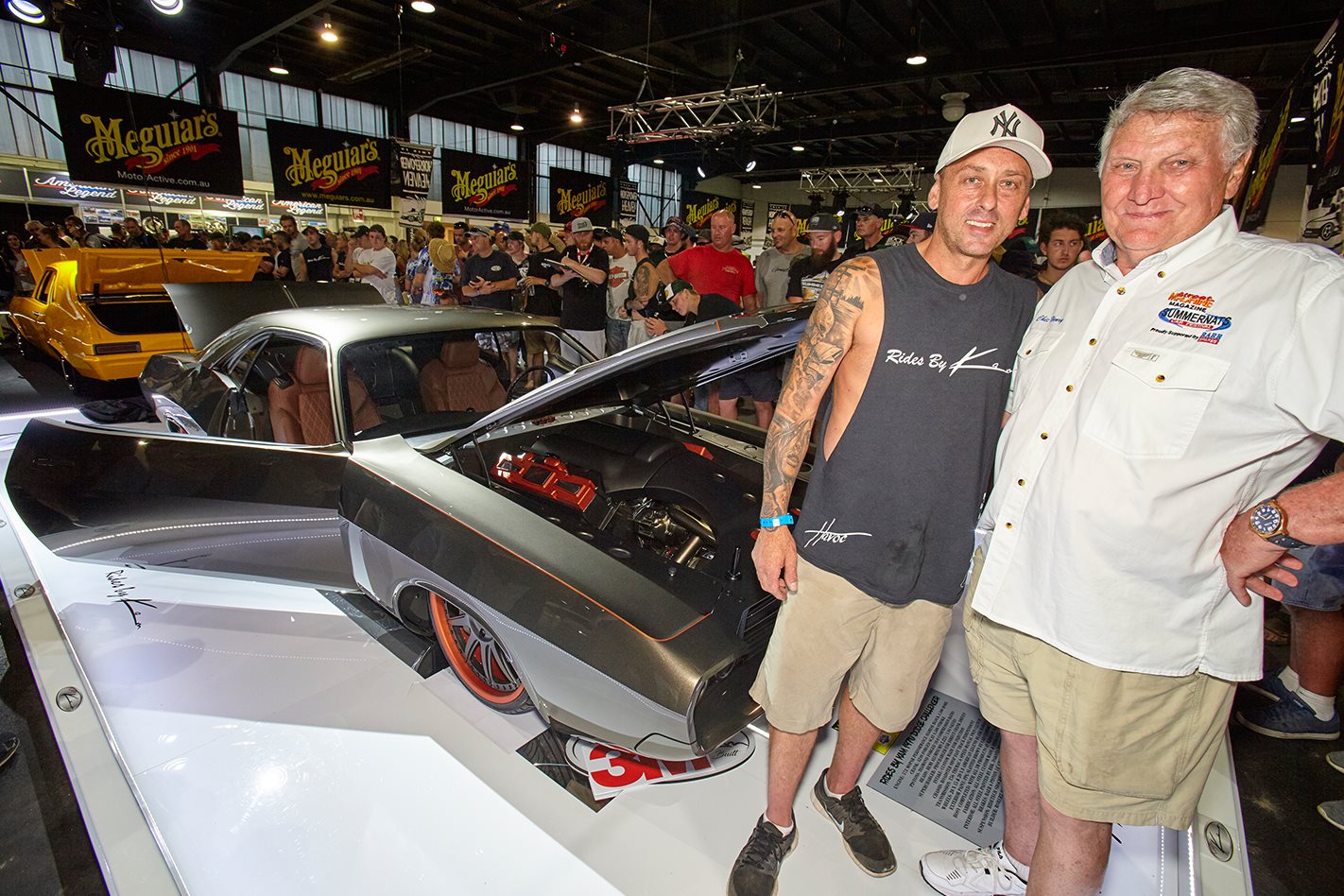 CHRYSLER E-body coupes are awesome-looking rides stock-standard, but Rob Zahabi’s latest creation from Rides By Kam takes the 1970 Dodge Challenger to a whole new level. Sitting on a full chassis from Roadster Shop in the USA, including one of their trick independent rear ends, and powered by a 572ci Hemi with an F3 ProCharger, it lives up to its name of ‘Havoc’. Ultra-trick details include the six-speed manual transmission, custom grille, lenses, dash, headlights and slick two-tone PPG paint over the top, and a super-low stance thanks to RideTech air suspension. 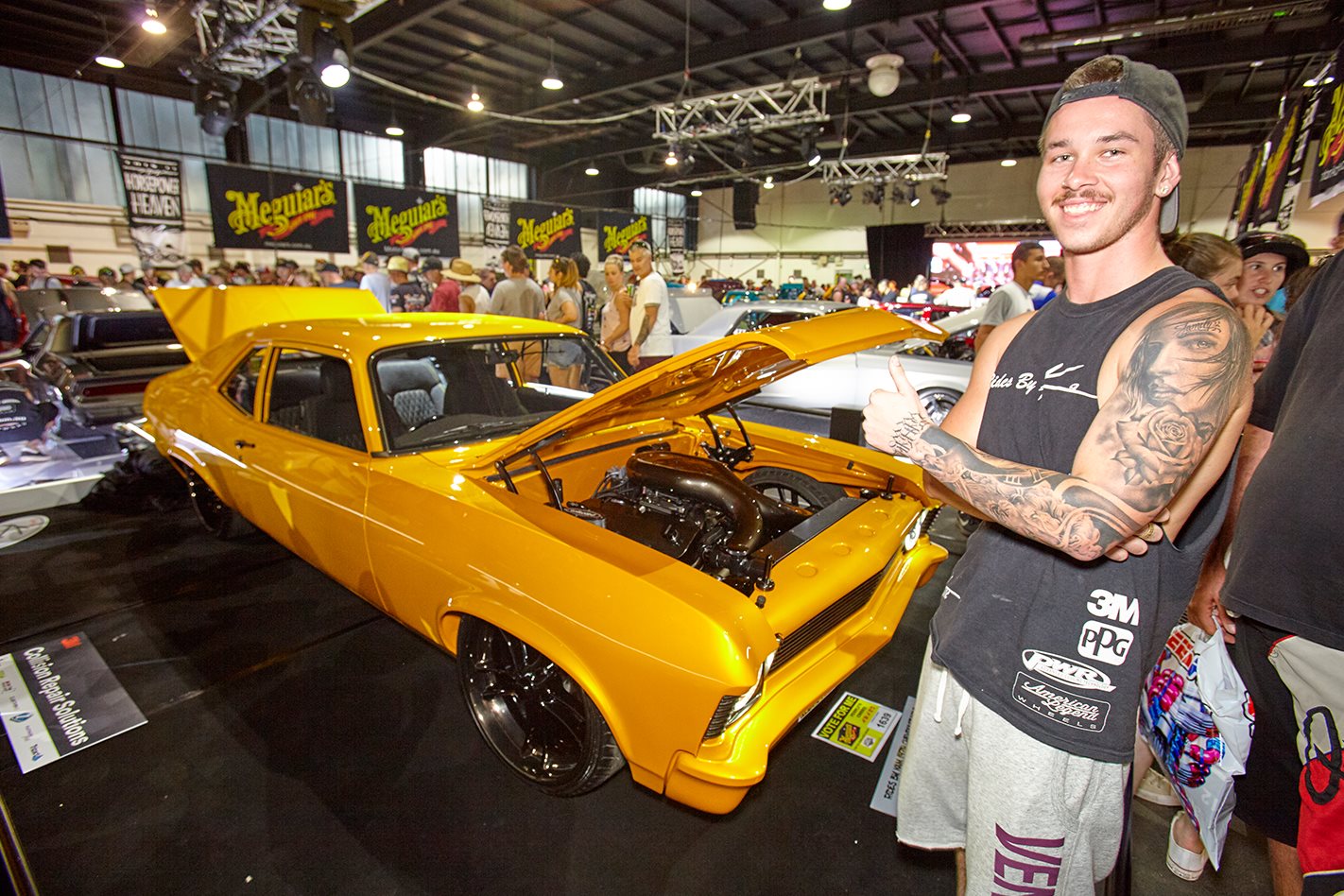 IN WHAT could be the first father-son unveil at Summernats, Rob Zahabi’s son Cooper whipped the covers off his amazing 1970 Chevy Nova, ‘Inferno’. He started building it at the ripe old age of 15, taking a scant three years to get it to the Summernats Elite Hall. Powered by a 454ci big-block Chev stretched to 468ci, it’s backed by a six-speed manual transmission, and coated in luscious Sunrise Pearl yellow, with a four-link rear end out back. The interior takes a new direction, with black Alcantara cloth rather than leather, and flat floors for a clean look. 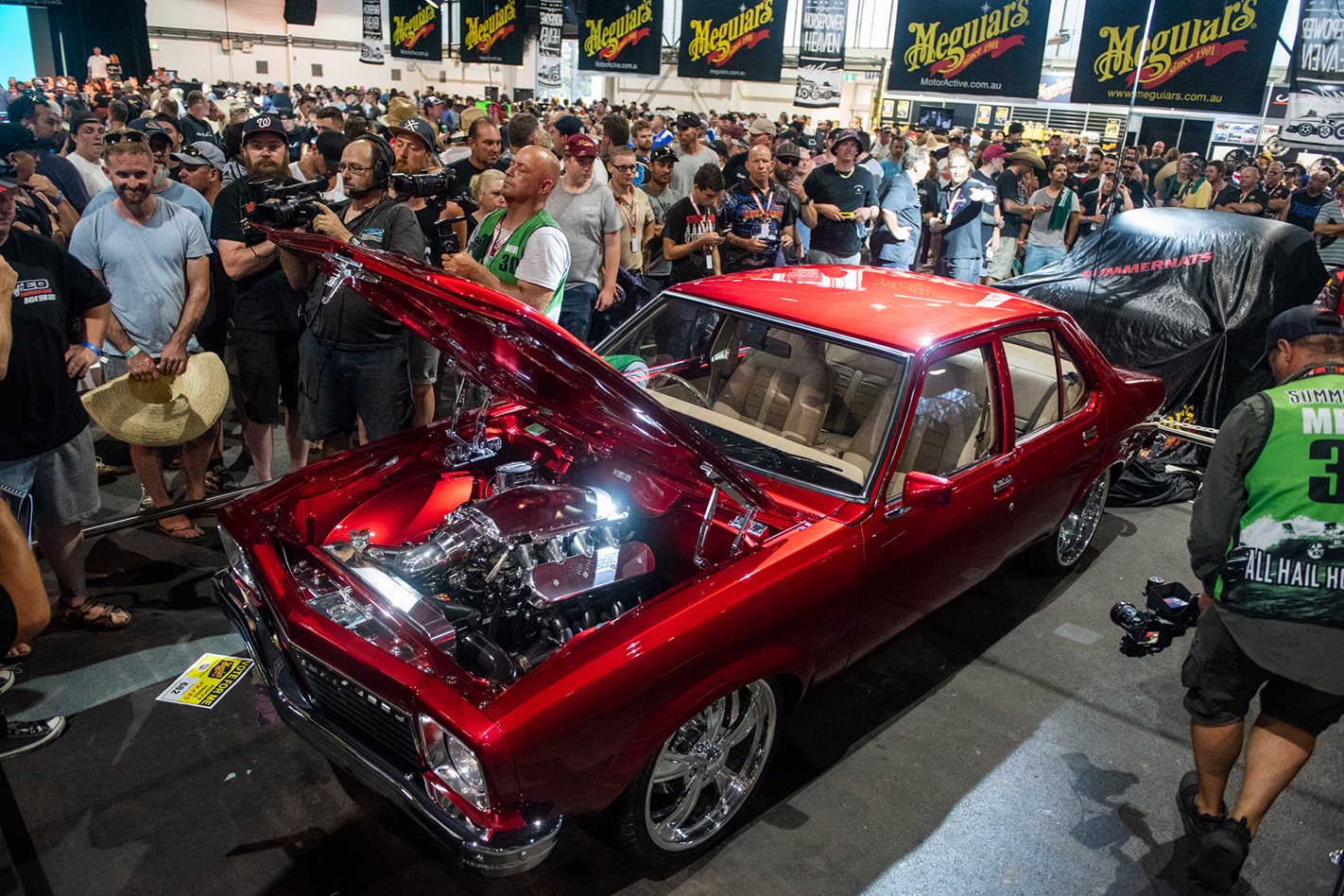 STEVE Martin’s MADLX has been a five-year labour of love, finished off in a six-month push. Power comes from a 408ci LY6 inflated by a pair of 67mm Garrett turbos hidden down low in the super-clean engine bay. Aiming for low eights or high sevens, Steve built the car at home, including the four-linked, mini-tubbed rear end with coil-overs, and it currently has a full interior until it comes time to hit the strip. The wet-looking red duco is DNA candy red over a silver base, and is one of the few parts of the car that Steve didn’t do himself. 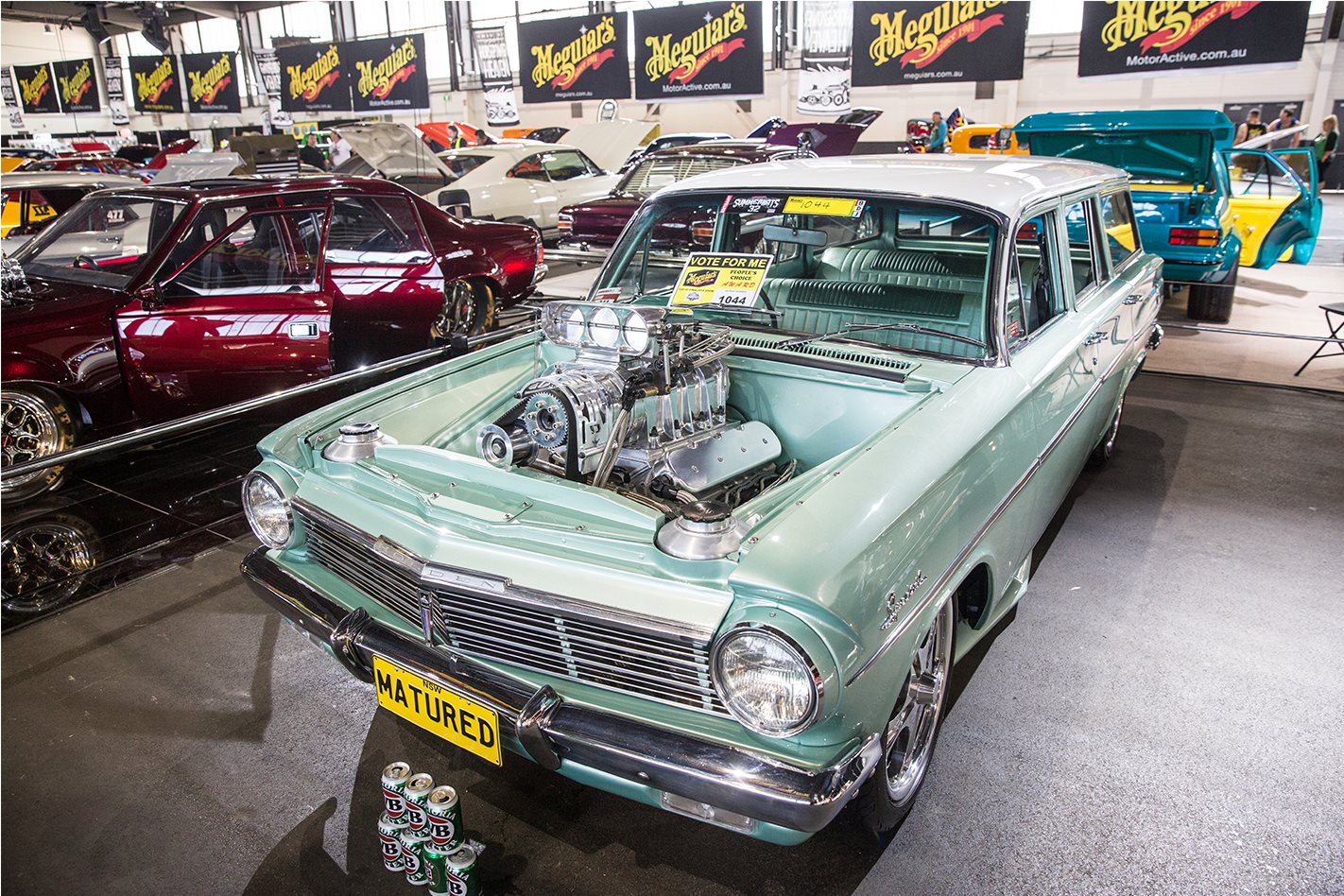 WHAT started off as a burnout build went way past slapping a tough motor in for Joe Tyler’s awesome EH wagon, ‘Matured’. Sporting a 6/71 BDS blower perched on top of a dry-sumped LS3, the combo made an easy 640hp at 9.5psi boost on the engine dyno. Sitting on a full chassis with a McDonald Brothers front clip, the spearmint-green and white longroof runs 18x7 and 18x10 billet rims, and amazingly was built in just 18 months! Joe still plans to skid the car, too. 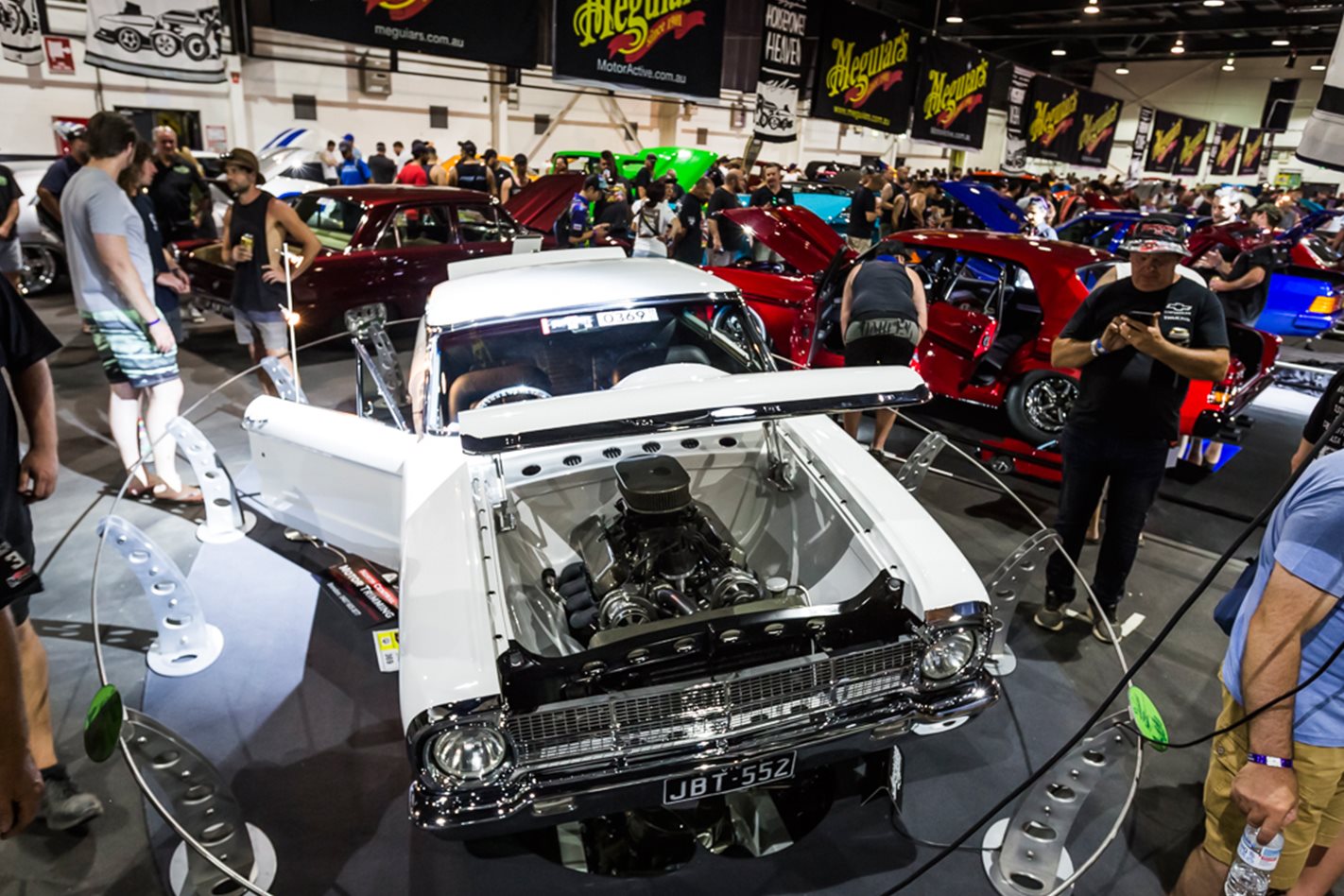 A CHANCE encounter with an early Falcon coupe as a 14-year-old was all it took to plant the seed in Mike King’s young mind. It took him another 14 years before he was in a position to own one, locating a fairly unmolested XM Futura in Adelaide. Mike stripped the car himself and had it sandblasted before handing it over to Deluxe Rod Shop for a stunning makeover. It might look like a pretty straightforward build, but there’s a ton of modifications in and under the car. With a 363ci Windsor, Tremec TKO600 and nine-inch, combined with a tubular IFS and four-link rear, this early bird is built to go as well as it looks. 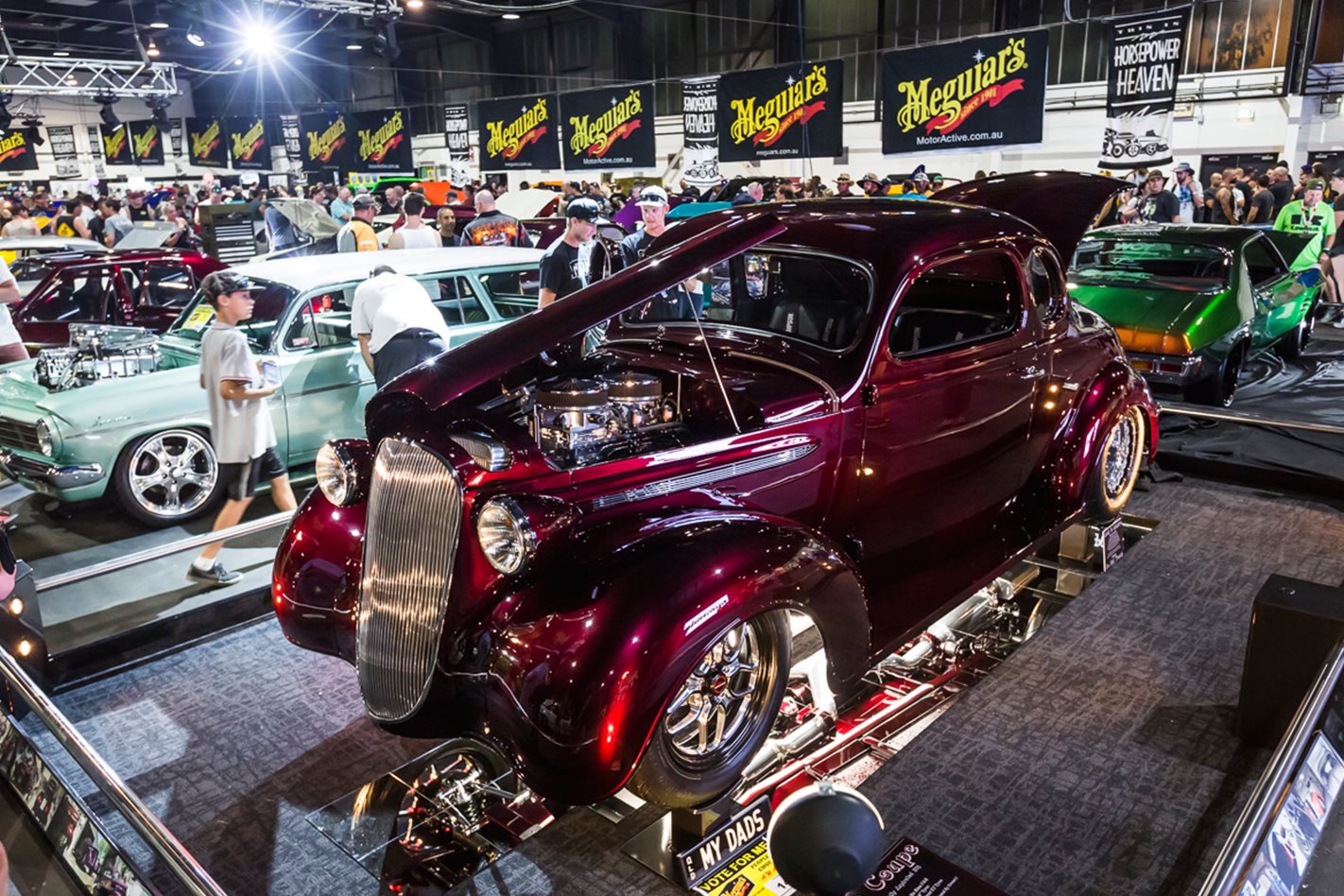 THE MYDADS plates give a clue to a small part of this tough hot rod’s story. Originally started by Dean Wilson’s father Errol, this Plymouth was an original California car that was destined to be a tidy street rod with 360 Chrysler power. Sadly, Errol passed away in 2009, and the car sat until 2015 when Dean took ownership and took the build in a completely different direction. With a 10-second ’34 Chev already in the shed, Dean had to make the Plymouth even quicker, and with a BBC making 947hp naturally aspirated, the old girl should run easily into the low nines. 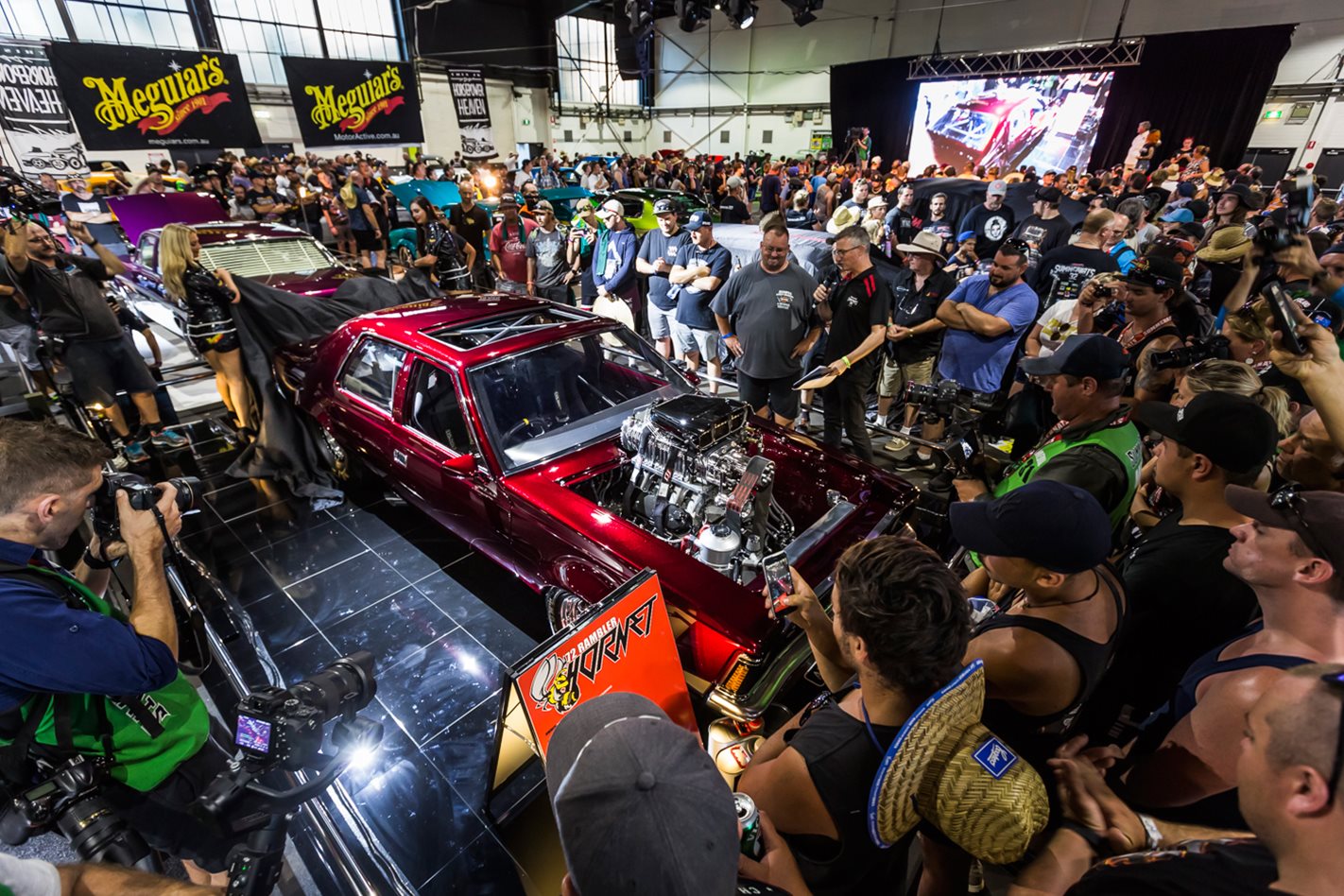 MICHAEL Brown has a thing for Rambler Hornets, already having a blown 427 Windsor-equipped example in the garage, but he figured another with twice the power and half the weight would be an excellent idea. Originally built as a burnout car, it’s pretty clear that it turned out a little bit too nice to throw around a pad surrounded by concrete blocks. Powered by an LSX454 with a 14/71 Hampton blower on top, and with carbonfibre tubs and floor, it’s going to be one wild ride. The massive tubs easily swallow the 33x16x15 slicks, and with wheelie bars and a parachute out back, we might even see it hit the quarter-mile sometime. 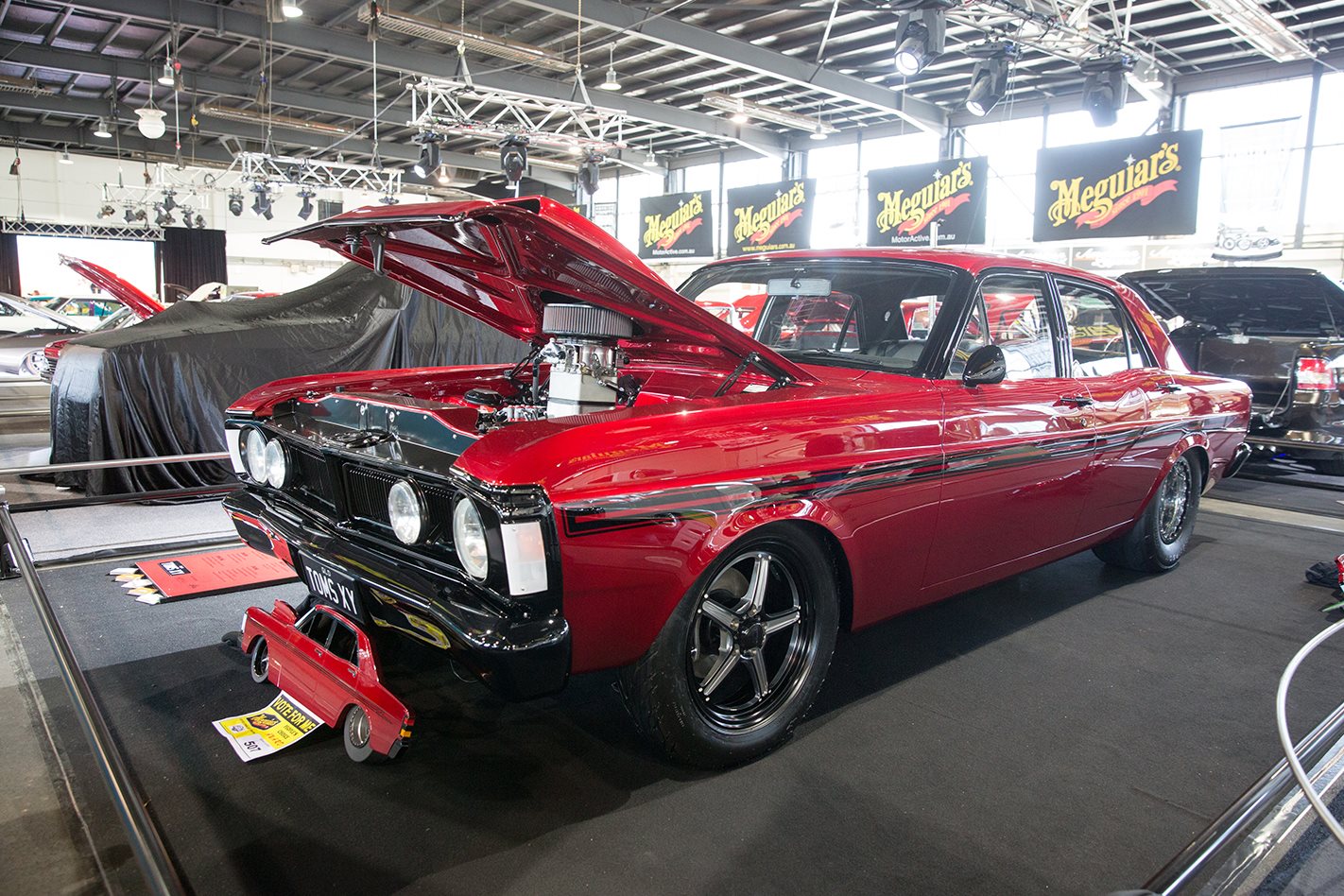 AFTER raiding the Rare Spares catalogue for every rust-repair panel they had, Tom Juric realised that he might actually be able to make a decent car out of the tinworm-riddled bucket of an XY that he started with. Steering away from the GT clone path, Tom wanted to honour the humble Falcon 500 origins of the car, hence the Falcon logo worked into the design of the side stripes. The car also received a major driveline upgrade with a TOCA-built 440ci small-block making 800hp, backed by a manualised C4 and nine-inch. Underneath is updated with an RRS front end and triangulated four-bar rear, while inside is a full-leather trim job. 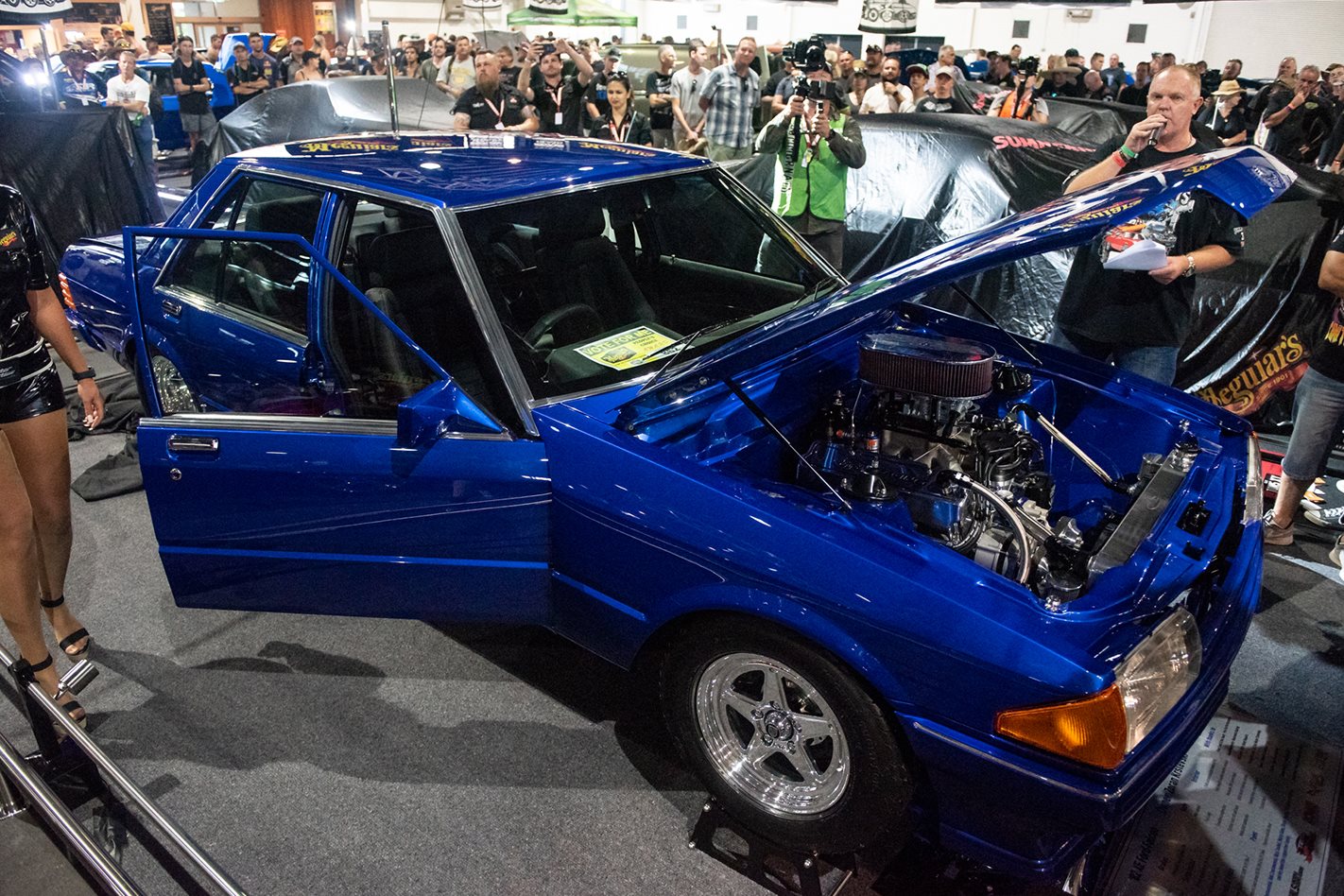 “I FEEL fantastic, on top of the world. I really feel privileged to have my car unveiled at Summernats 32,” said Zoran Krstevski shortly after the sheets were yanked off his long-suffering XE Falcon. Dedicated to the memory of his dad Mick, THE XE has been 10 years in the build, though Zoran has owned it for 20. Powered by a staunch 393ci Clevo that’s good for 663hp on pump fuel – plus a whole lot of nitrous ­– the car is a real all-rounder, finished to show standards but built for the street and capable of hurtling down the drag strip in no time flat. 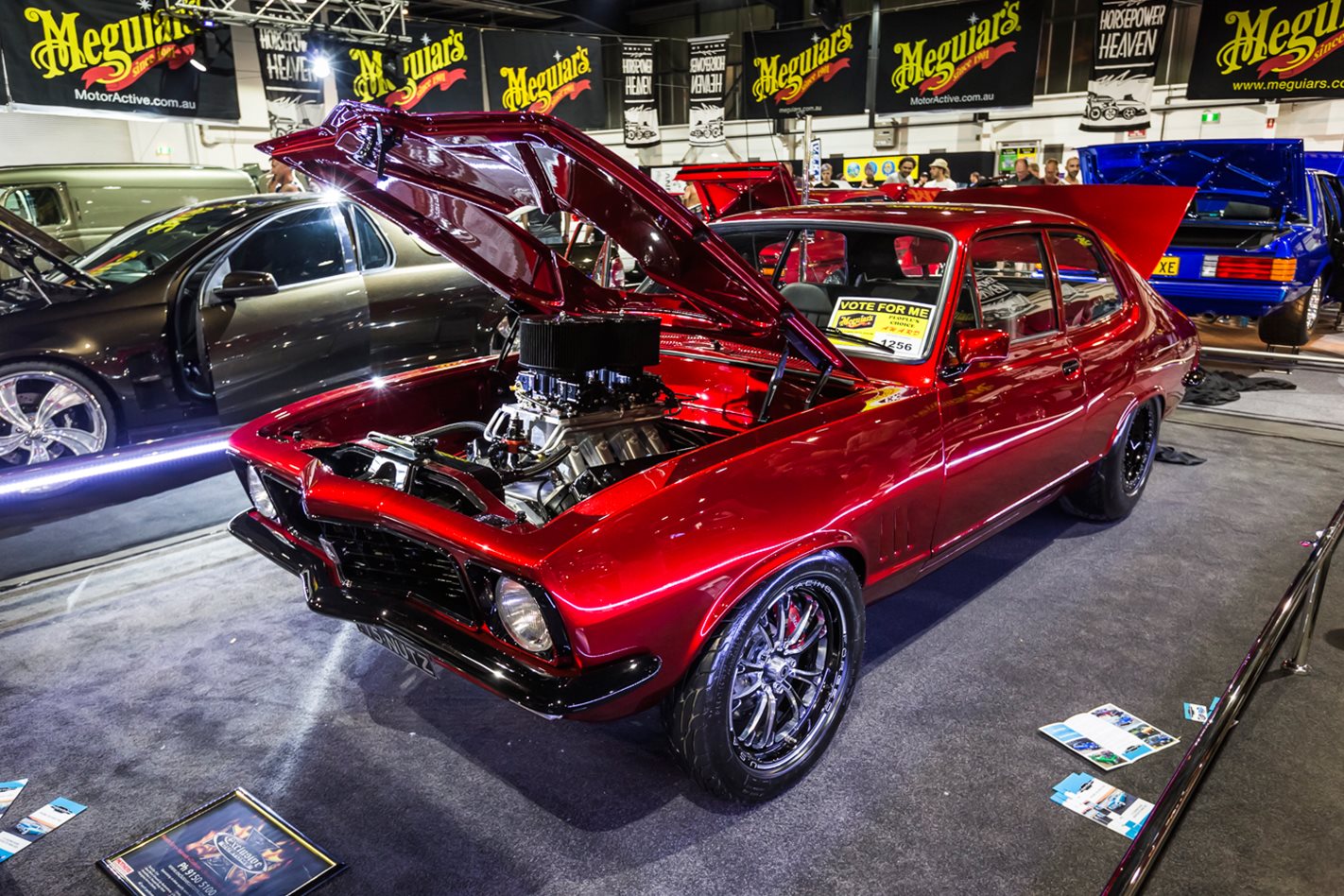 CHRIS Campbell had a mini-tubbed, V8-powered LJ coupe when he was a young fella, but sold it to buy a house. Now, 20 years down the track, he’s had another crack at it. It’s rocking a tunnel-rammed 355ci Holden stroker, Trimatic and nine-inch rear end with mini-tubs and coil-overs. The crew at Exclusive Customs were responsible for the stunning paint finish, and Elite Custom Interiors looked after the trim. “I’m really happy with it,” grinned Chris. “It was a slow build, so it gave me a chance to powdercoat the front and rear ends, which then led to everything else being a little bit more top-notch than I originally planned. But it’s still a street car and it’ll be driven heaps.” 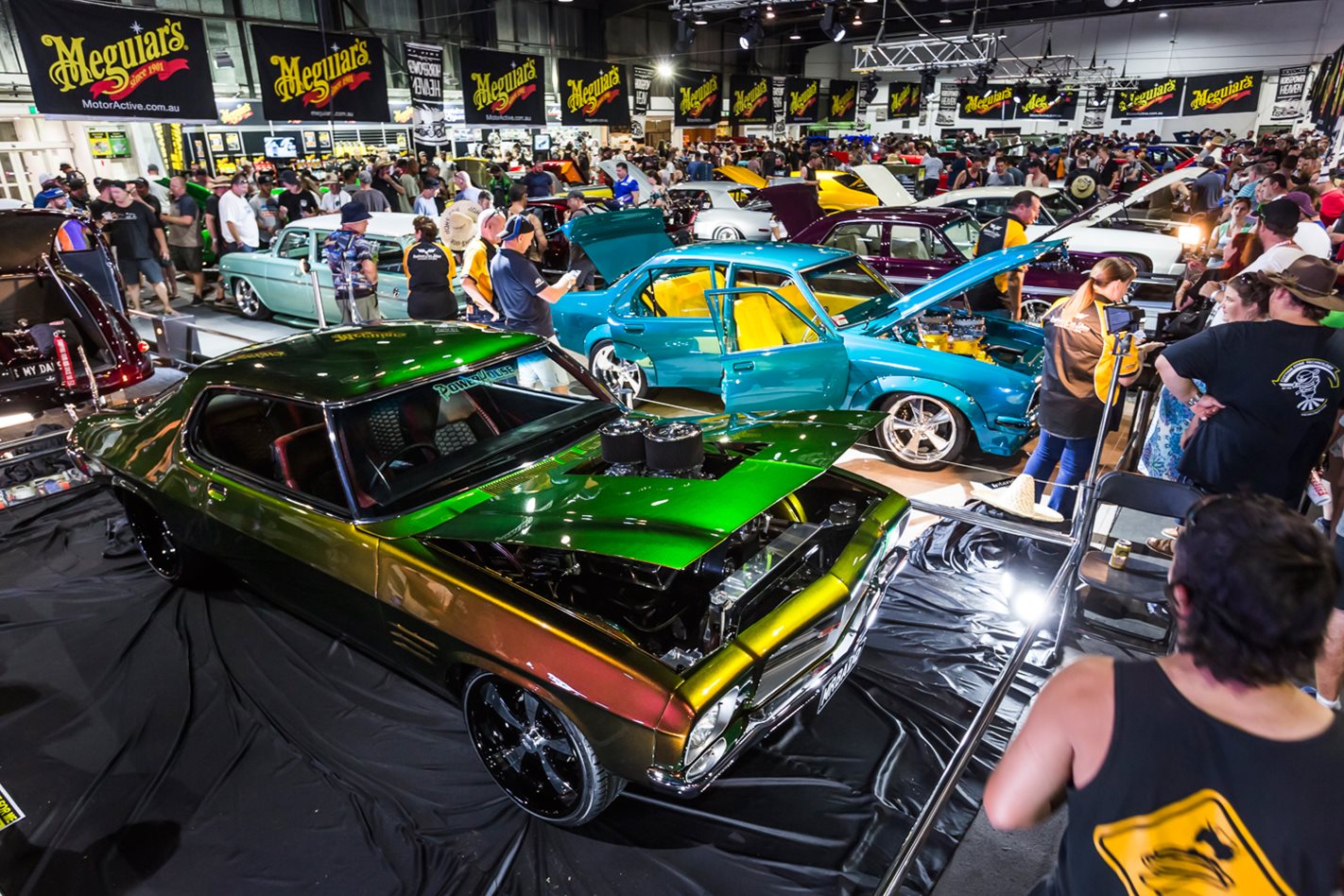 AFTER more than a decade on the burnout pad, Ross Heasley deemed September last year a perfectly reasonable time to strip his MRBADQ HQ down in readiness for a Summernats unveiling. The Dart SBC, Turbo 350 and nine-inch remain untouched though, and for good reason: “It’s so reliable and competitive; I can’t change it,” Ross explained. Upgrades include a new black leather interior with eye-searing crocodile skin highlights, but the party trick is the Didspade SuperShift metallic pearl paint, which shifts from green to brown and back again along the HQ’s flowing flanks. The freshen-up won’t prevent Ross from hitting the pad with it again, though: “Mate, it’s never too pretty,” he declared. “It’s only paint!” 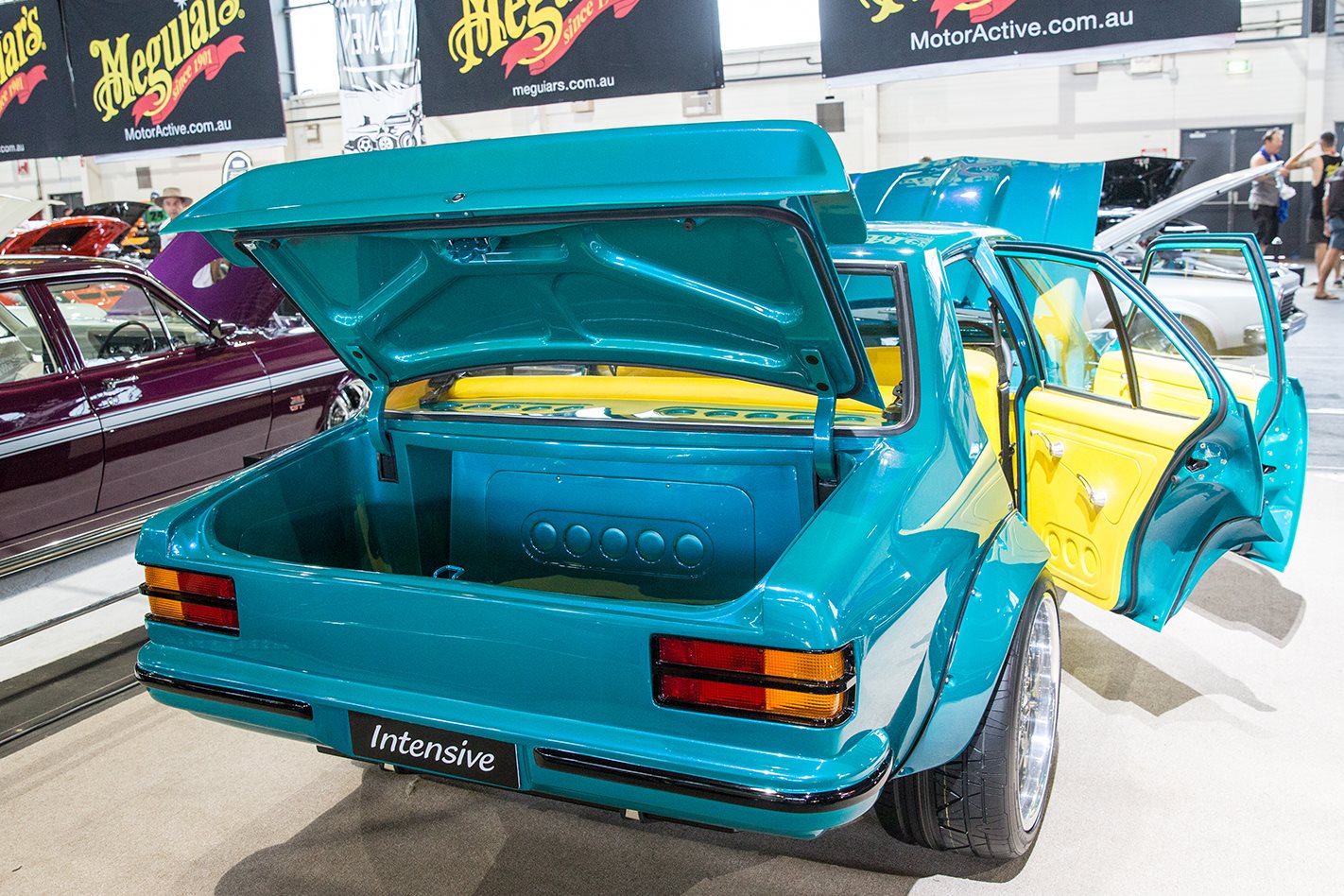 AN ‘INTENSIV’ two-year build saw Chris Shields’ Torana leave Peter Crisp’s two-bay garage only once. Peter was let loose to influence the project, deleting every visible nut and bolt, seam and join. Even the bumper and rubbers have been integrated into the fully customised body. “There were a few heated discussions, but we’ve come up with something that we’re both happy with,” Peter said. The heavy metalflake teal paint contrasts with a yellow leather interior, engine block, heads and even a canary-coloured tunnel ram. Five hundred horses and Tremec T5 guarantee Chris will be driving this once the show circuit is over. 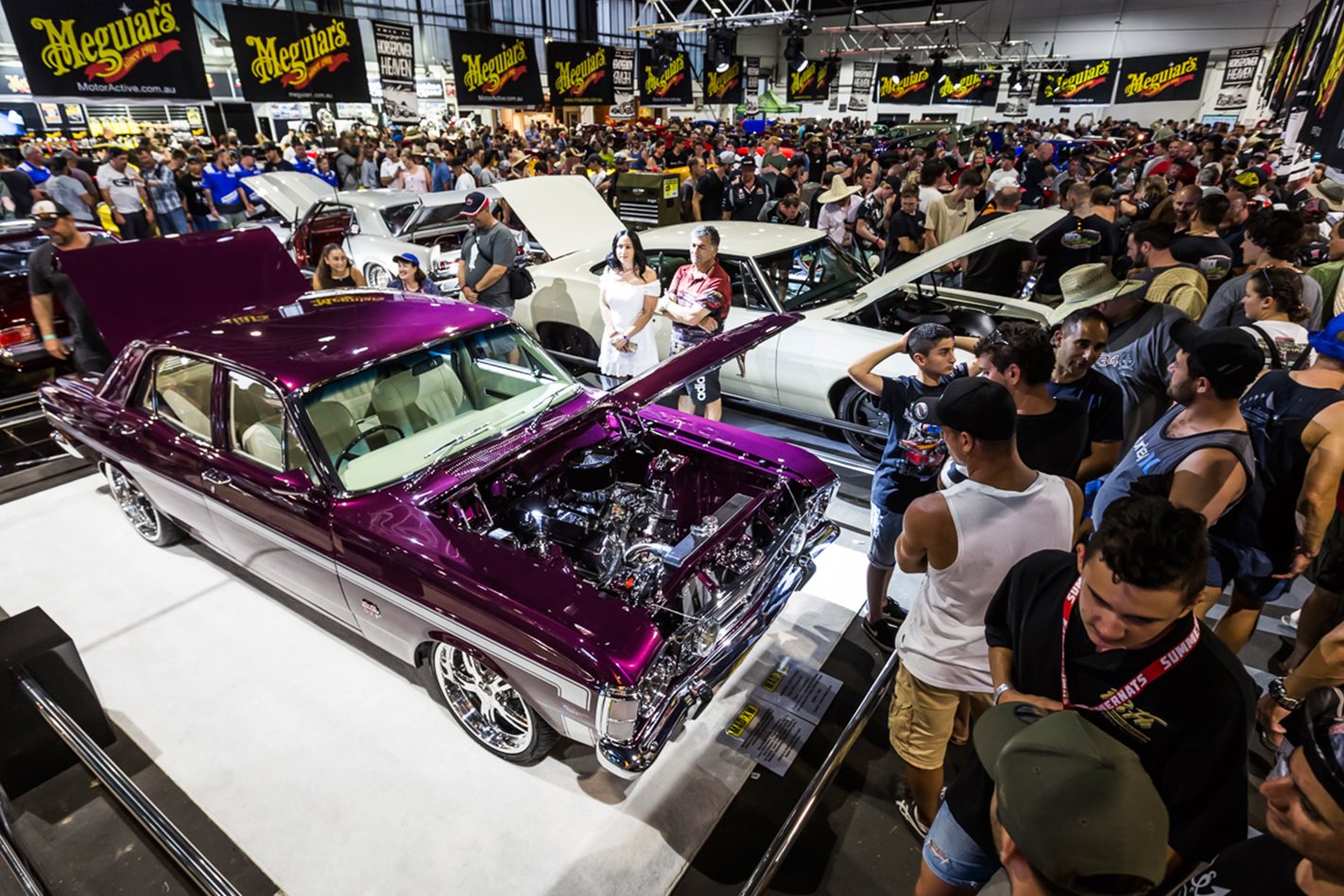 “THIS car is as original as I could go, but with a modern touch,” Jamie Galea said of his XW. Under the bonnet rests a stroked 393ci Cleveland, backed by a shift-kitted C4 ’box and nine-inch – all parts fitted to the car 20 years ago as a GT replica. Jamie was keen to keep the provenance of the car, refraining from body mods and letting the XW’s iconic shape speak for itself. The engine bay retains every fold and crease, while the rear wheel wells remain un-tubbed. GT gauges against a white customised interior, vivid PPG Plum Magenta pearl paint and Schott billets complete the package. 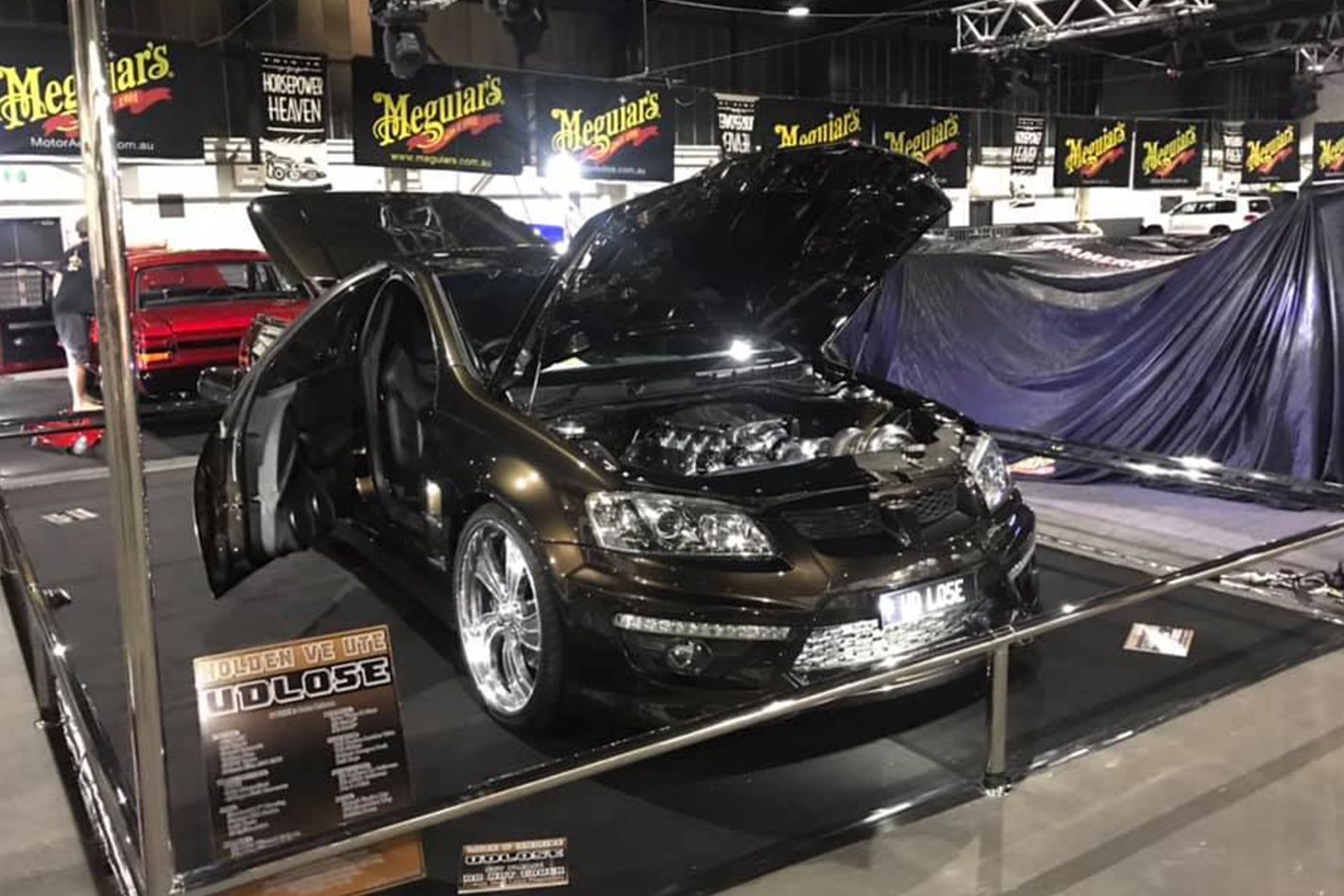 STARTING with a 30,000km-old car some seven years ago, Peter Robson’s VE ute build had a fair few ups and downs. “It was easier to unpick the guards and start again,” Peter said. He kicked the build into overdrive two years back, with the VE body receiving a bunch of mods including suicide doors, smoothed engine bay, reverse-cowl scoop, a sheet-metal tray and a Maloo bodykit. The 403ci cast-iron LSX up front is huffed by a GTX47 turbo and turns a set of 24x10 Intro Vistas at the other end. “I just wanted a nice street car with a clean look,” Peter said. 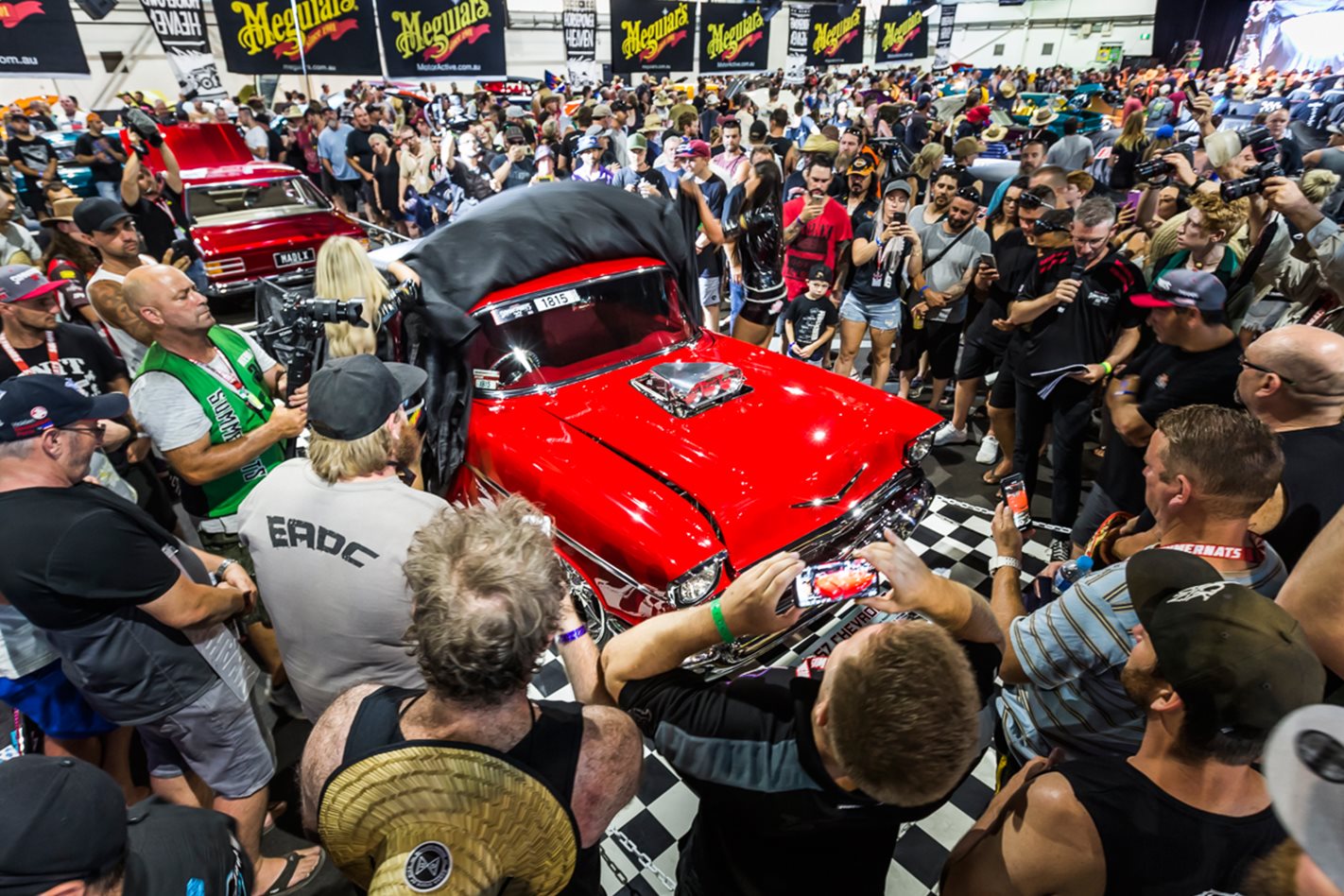 “THIS is a brand-new body from Real Deal Steel in the USA,” explained Joe Panzarino of his stunning ’57 Bel Air. The JOEBLO team – Pete, Scott, Steve, Robert and no less than three Joes – sourced a donor coupe for the chassis, hanging panels and all the stainless. The quarter windows and bonnet rockets were deleted and a set of mini-tubs fabricated. An 800hp, 400ci Chev sits under a Joe Blo Speed Shop EFI kit and 6/71 blower, backed by a Reid Racing alloy-cased T400 gearbox. “We were still working on the car on Friday,” Joe said. “The boys worked through Christmas and Boxing Day, but it’s worth it, a hundred percent.” 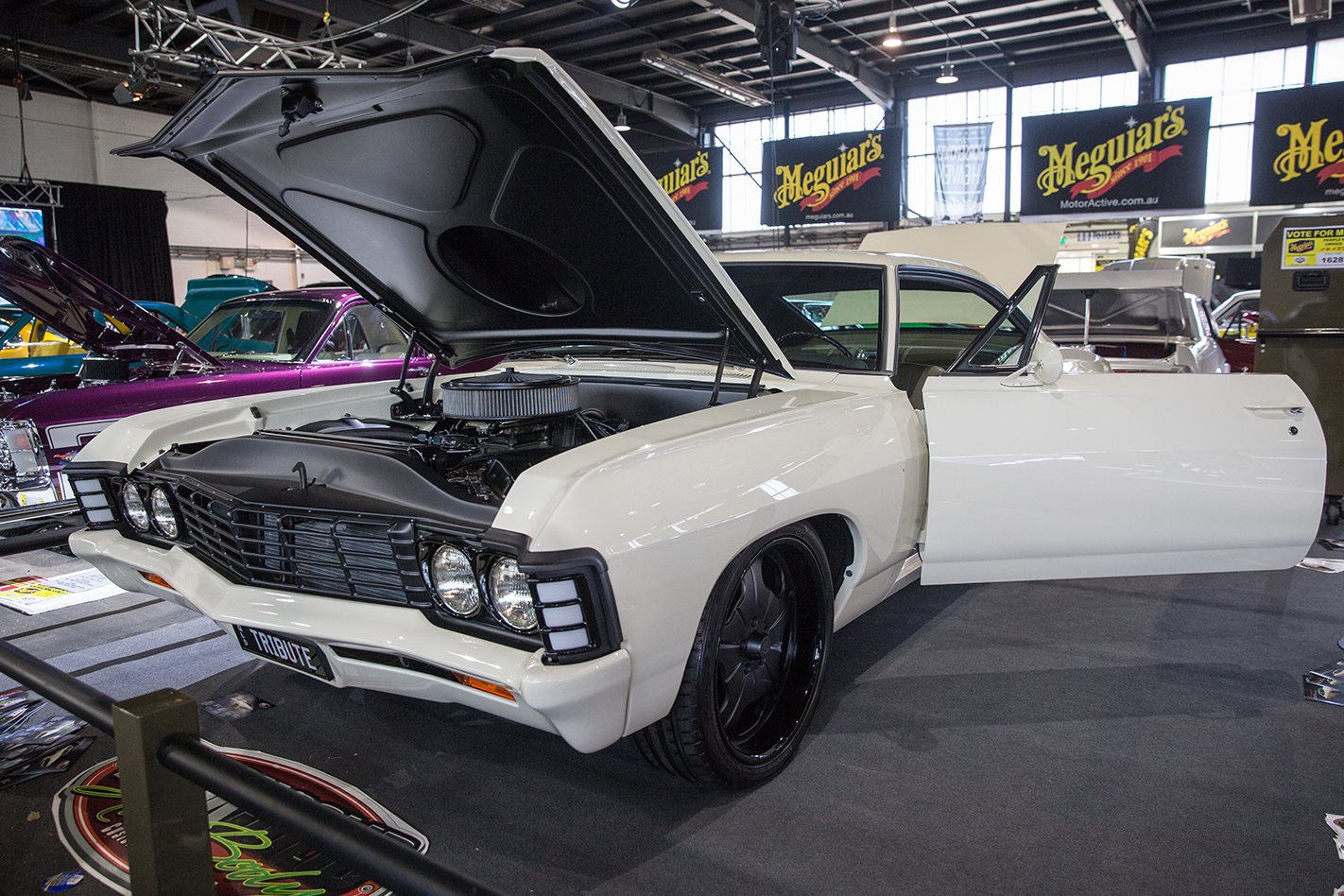 WHEN it comes to a cool-cruising street car, few have the presence of a full-sized American land barge, and Todd Sorensen’s ’67 Impala is an absolute beauty. While most of the chrome has been coated in satin black, the curvaceous body is covered in era-sympathetic Chrysler Vanilla cream, contrasting with the satin-black 20x8 and 20x10 Intro Billets. Under the bonnet is a 582ci Merlin II big-block Chev wearing an 1150cfm Dominator carb – perfect for lazy cruising torque. 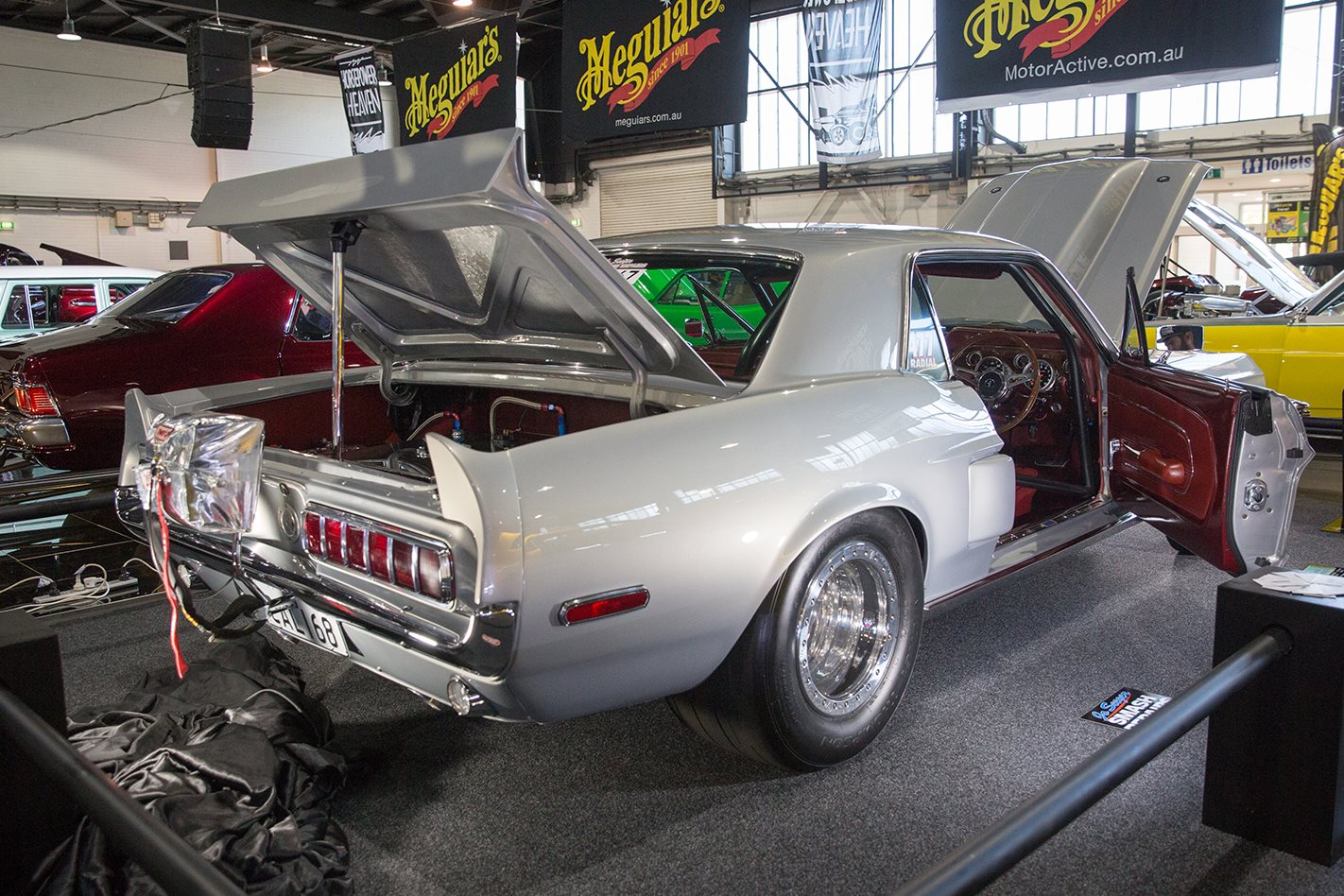 JAI Schluter is no stranger to fast Fords, having campaigned the ‘Killer Tomata’ XC coupe for many years, popping massive wheelies on the way to eight-second quarters through a manual gearbox! But it was time for a change, as Jai wanted something that was a little more street-friendly but could still run eights. With 393 cubes of tough Clevo up front punching out 750hp through a transbraked C4, those timeslips should be achievable, and when it’s time to cruise with the family, it’s an easy job to take out the side intrusion and taxi bars and hit the street.