Everything you need to know about the first-ever Summernats Slam, which kicks off on 8 January 2021 at Sydney Dragway

WHILE Australia is slowly but surely climbing out of the coronavirus pandemic, things haven’t quite returned to normal. Sadly, uncertainty around travel restrictions and crowd limits has led to the postponement of Street Machine Summernats 34. But fear not – the ’Nats gang have dreamed up an all-new event on the traditional weekend of Summernats, and it’s shaping up to be so much more than just a consolation show.

The first-ever Summernats Slam kicks off on 8 January at Sydney Dragway, promising three days chock-full of burnouts, drag racing, epic show ’n’ shine beasts and plenty more. A who’s who of drag racing and burnout big hitters having thrown their hats in the ring to duke it out for $30,000 in cash and prizes, and we can’t wait to see it go down. 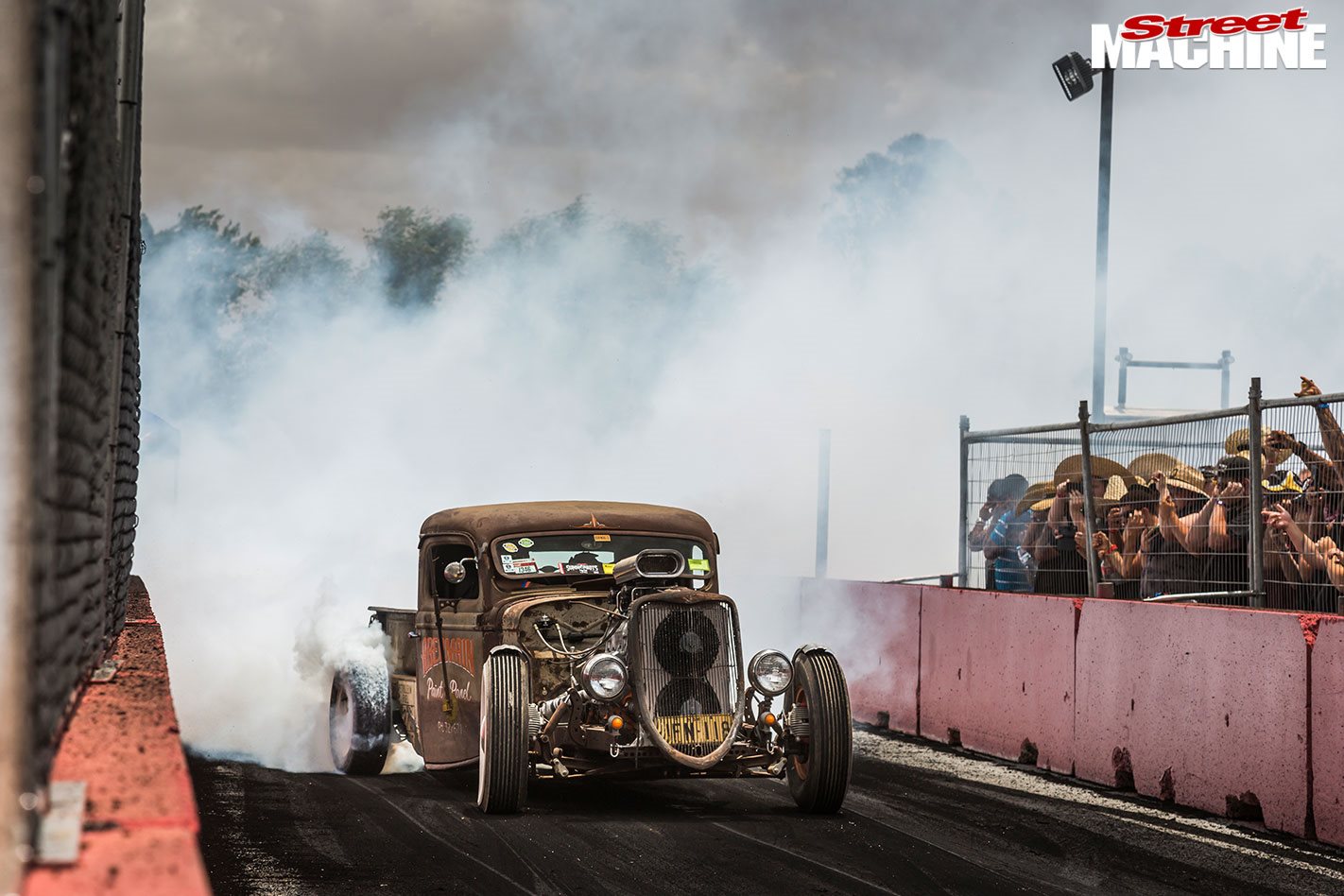 Plenty of planning and preparation has gone into making sure the Slam is COVID-safe and fully compliant with NSW Public Health Orders. Pleasingly, as the pandemic situation has improved in NSW, restrictions around attendance and grandstand seating capacity have eased to allow larger crowds than were first expected. All aspects of the event will take place outdoors, with hand hygiene stations aplenty to help ensure the safety of all visitors. Unlike your usual Summernats, the Slam will be an alcohol-free event.

At time of print, spectator tickets are still available from summernats.com.au, but they’re selling fast! 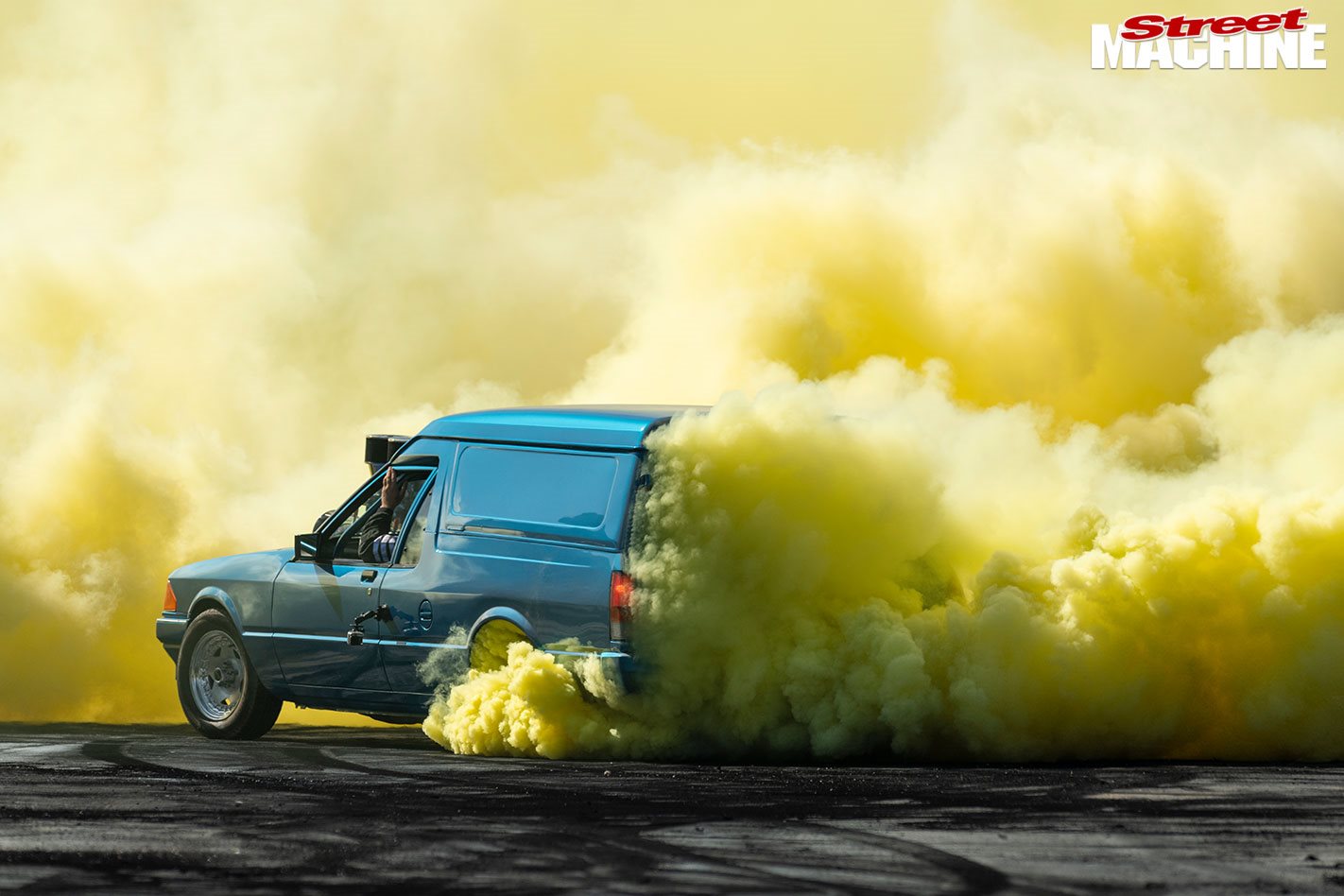 SPECTATOR gates for Day One of Summernats Slam open at 8:30am on Friday 8 January. Drag racing is the day’s main agenda, kicking off with Garrett Advancing Motion Drag Day and there’s $10,000 in prize money on offer. The NSW Government has just thrown $11 million into a comprehensive upgrade of Sydney Dragway, including a concrete track resurfacing and upgraded asphalt braking zone, and Summernats Slam will be one of the first opportunities to see properly fast door cars take on the new track. Spectator facilities have been improved too, with concrete seating in the cauldron, new lighting and improved timing boards to make for a fantastic trackside viewing experience. 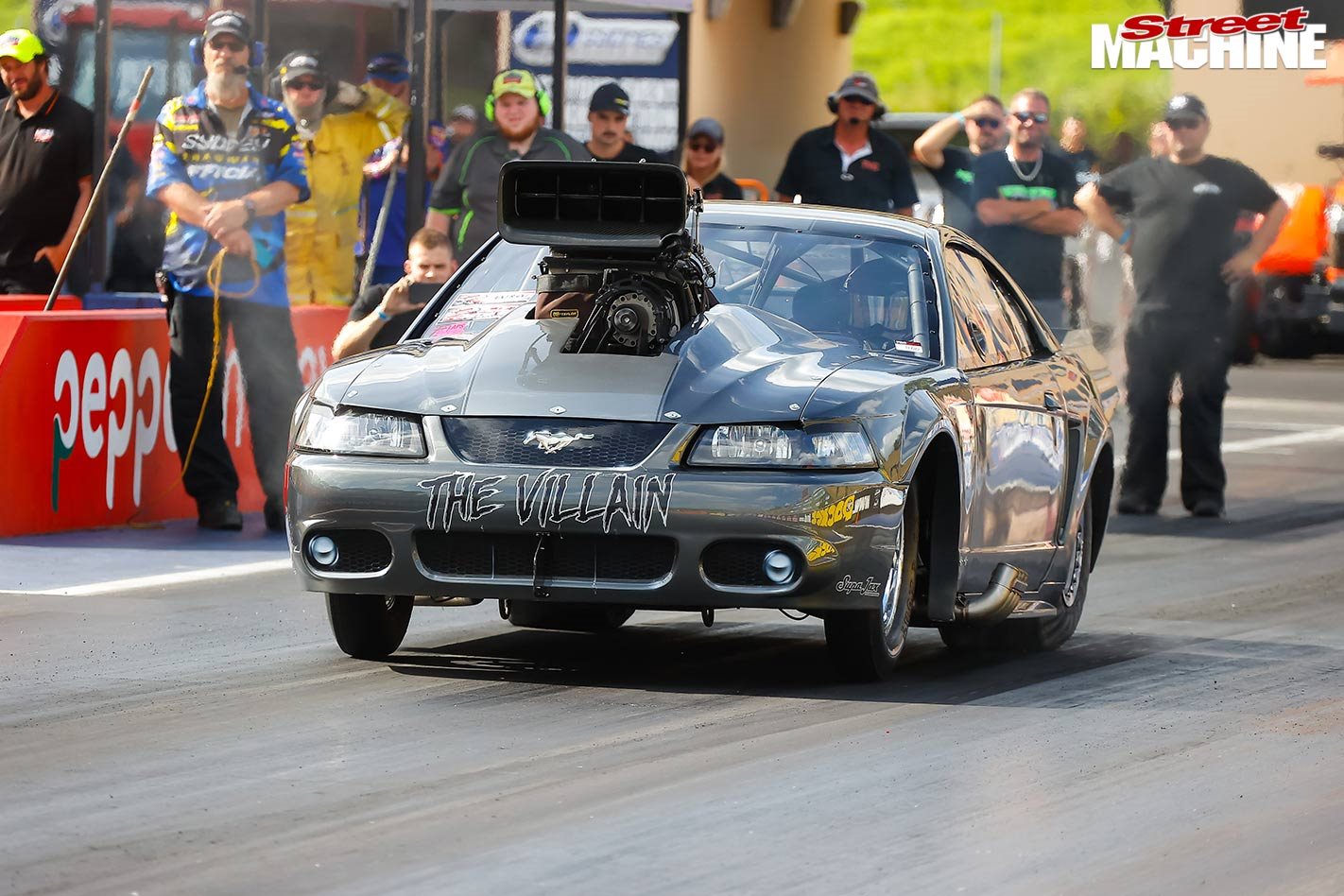 There’s a nice mix of blower and turbo cars on that list, which is fitting, given that Summernats Slam will see black belts match-racing against turbo teddies to determine which form of forced induction reigns supreme in a colossal blower versus turbo shootout. You’ve seen a Pro Slammer shape up against a turbo radial car on the dyno at Summernats, and now that battle will extend to the track. 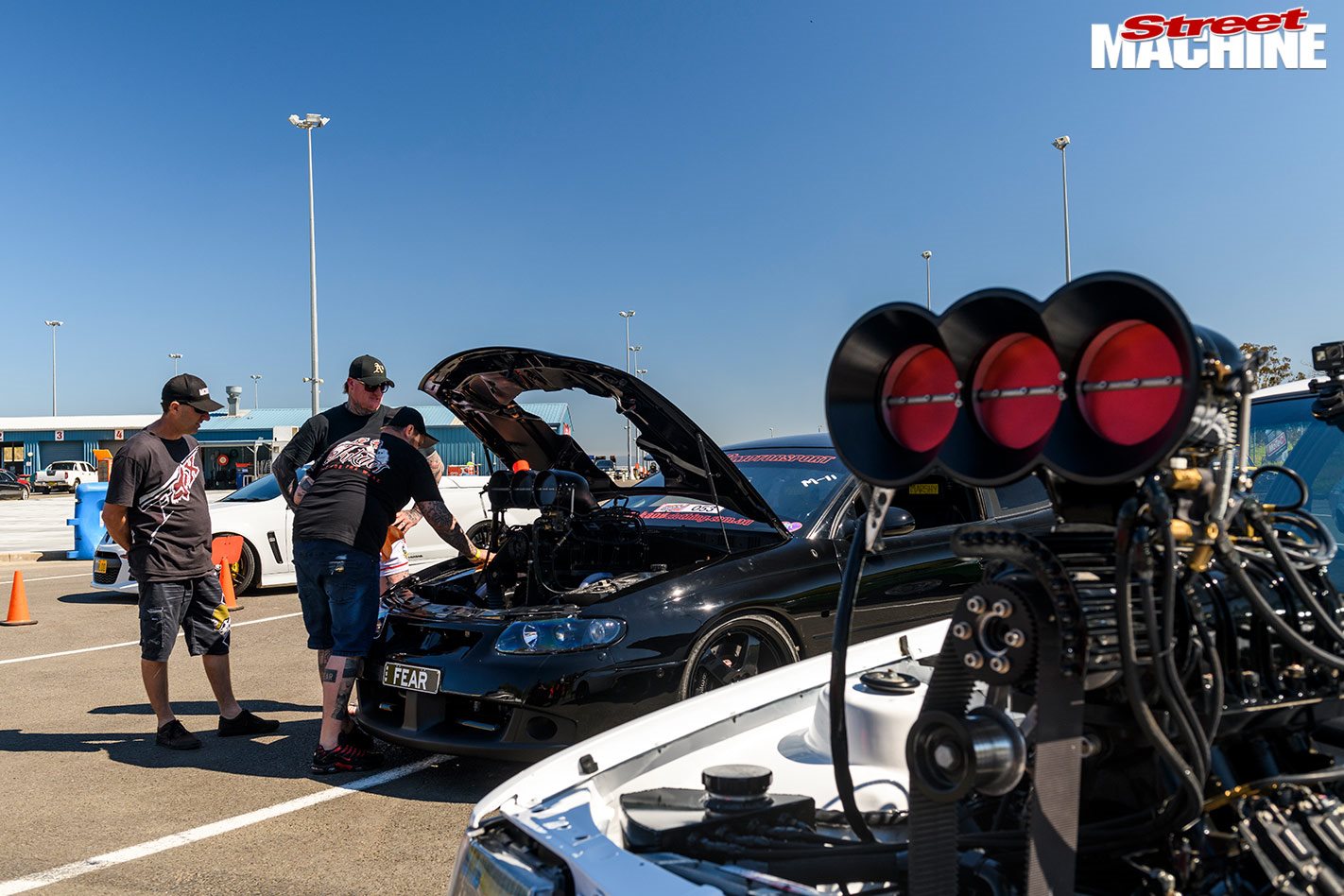 Competition tees off at 5pm for five solid hours of drag strip action as drivers duke it out for top honours in five separate classes. The Street Fighter category will be dial-your-own (DYO) racing for cars with ETs above 13 seconds. Extreme Street and Sportsman classes will also be DYO, featuring cars running between 11.00-12.99 and 8.00-10.99 respectively. Cars with ETs between 6.50 and 7.99 will compete in the Modified Sportsman class in heads-up racing, with anything quicker falling under the Extreme category. 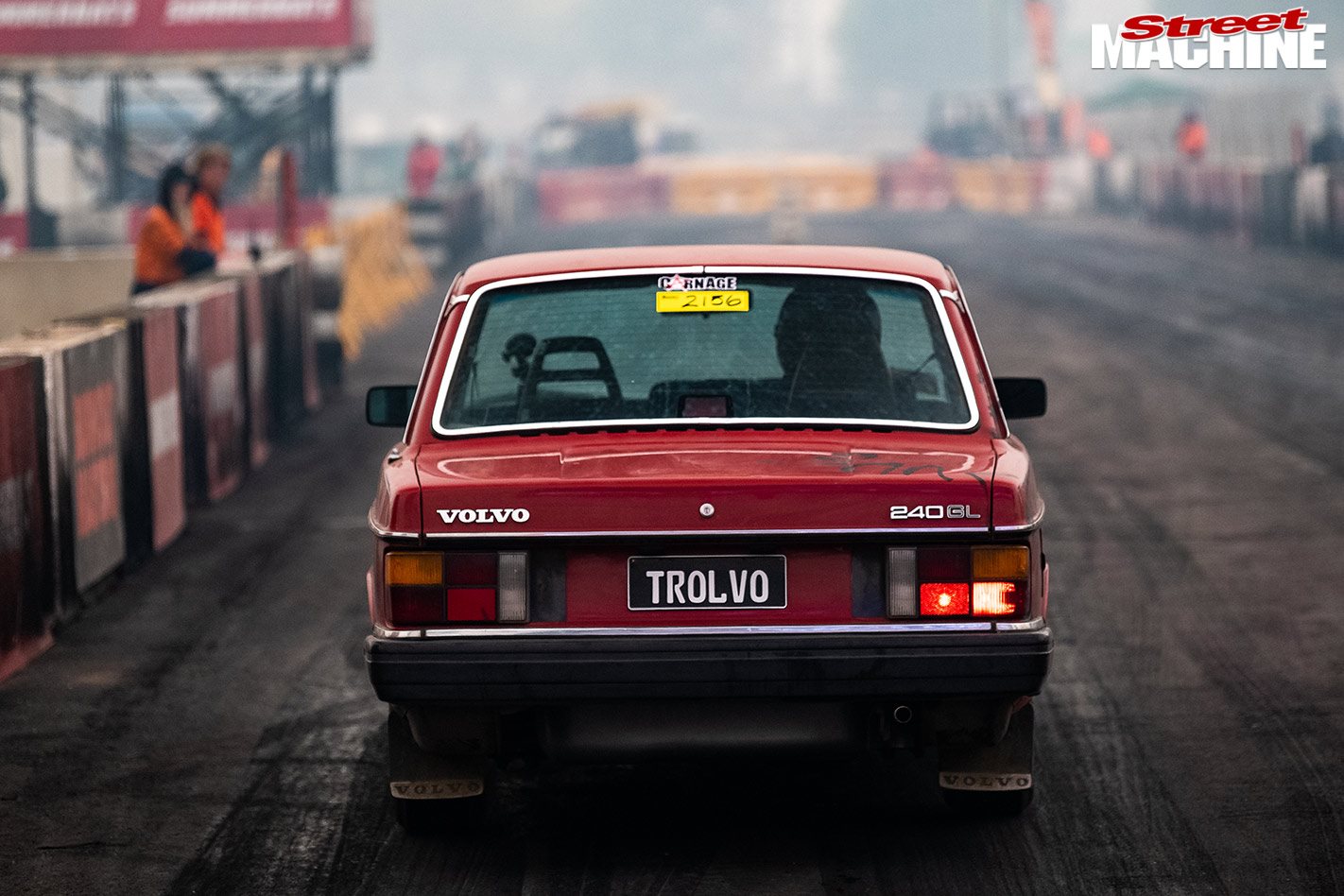 SATURDAY’S proceedings kick off with four hours of grudge racing, with entrants going head-to-head on the quarter-mile for bragging rights.

The rest of Saturday is devoted to many of the tried-and-true classics you’re familiar with from Street Machine Summernats. Open from 9am, fan-favourite Skid Row will be the perfect place to check out a variety of big-horsepower machines converting rubber into smoke. For entrants, if you’d like to rip a skid in front of a grandstand full of punters without the pressure of competing in the burnout competition, this is your chance. 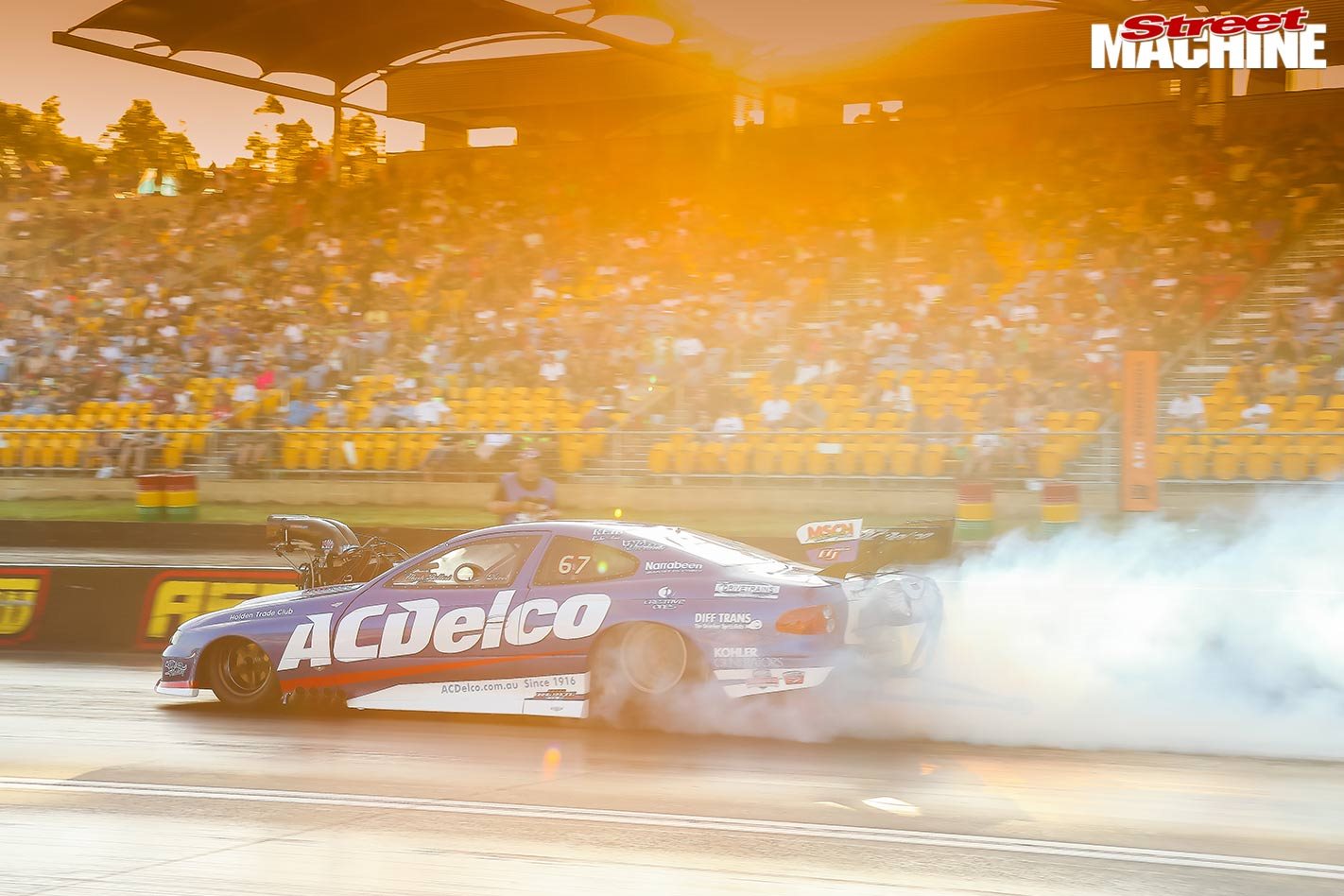 If skids or straight-line action aren’t your style, mosey on over to the motorkhana, also starting at 9am. Here, the steering and stopping mettle of both car and driver will be tested through a series of corners and braking zones in an exciting tarmac course.

For fans of high-end show cars, the Slam’s show ’n’ shine will run parallel to these events, offering a chance to get up close and personal with some beautifully finished cars. 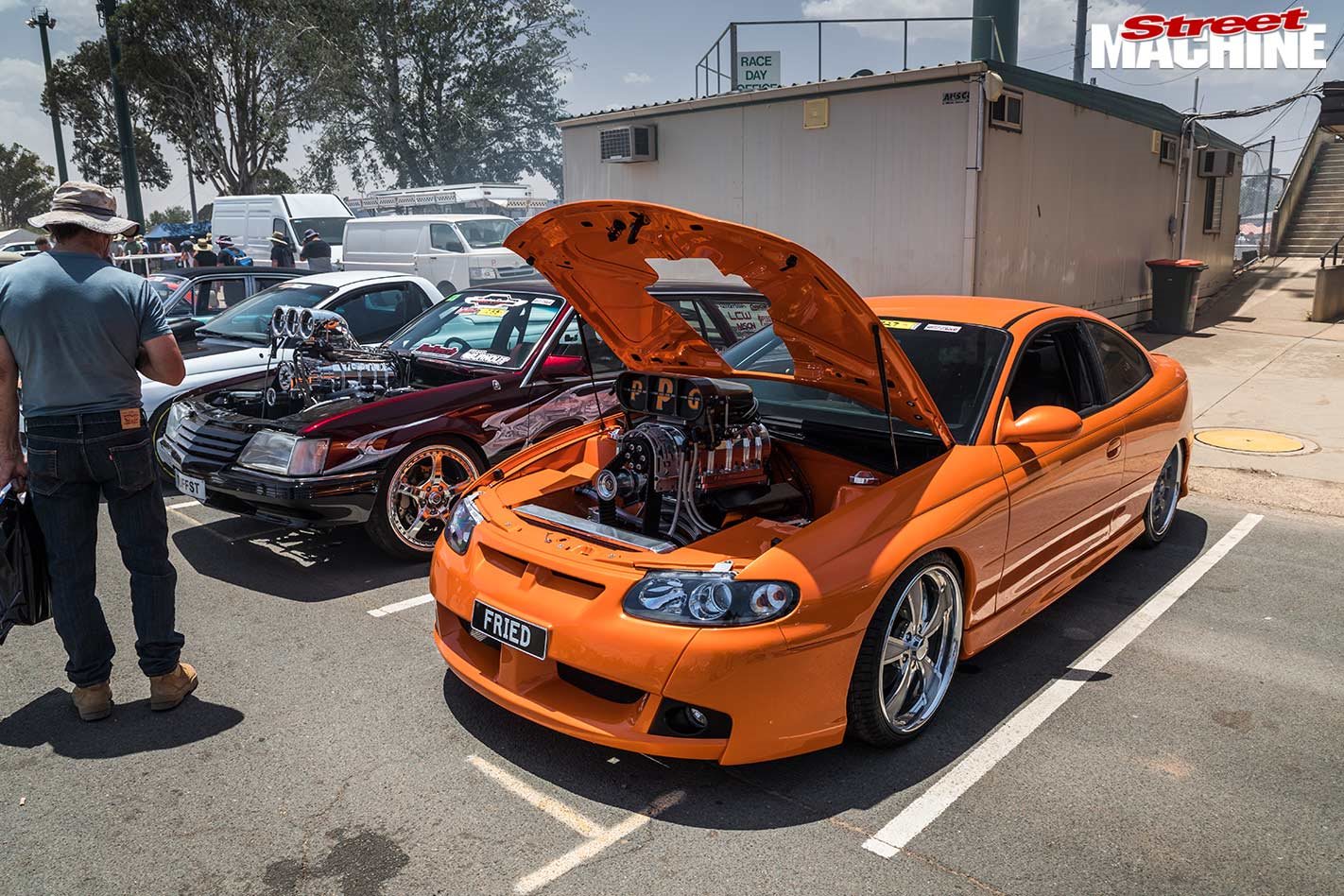 Of course, it wouldn’t be a Summernats gig without wild burnouts. From 2pm, the pad will be lit up for practice sessions, before the main event begins at 6:30pm. It promises to be a huge show, as some of Australia’s biggest burnout names compete for their share of $15,000 in prize money. 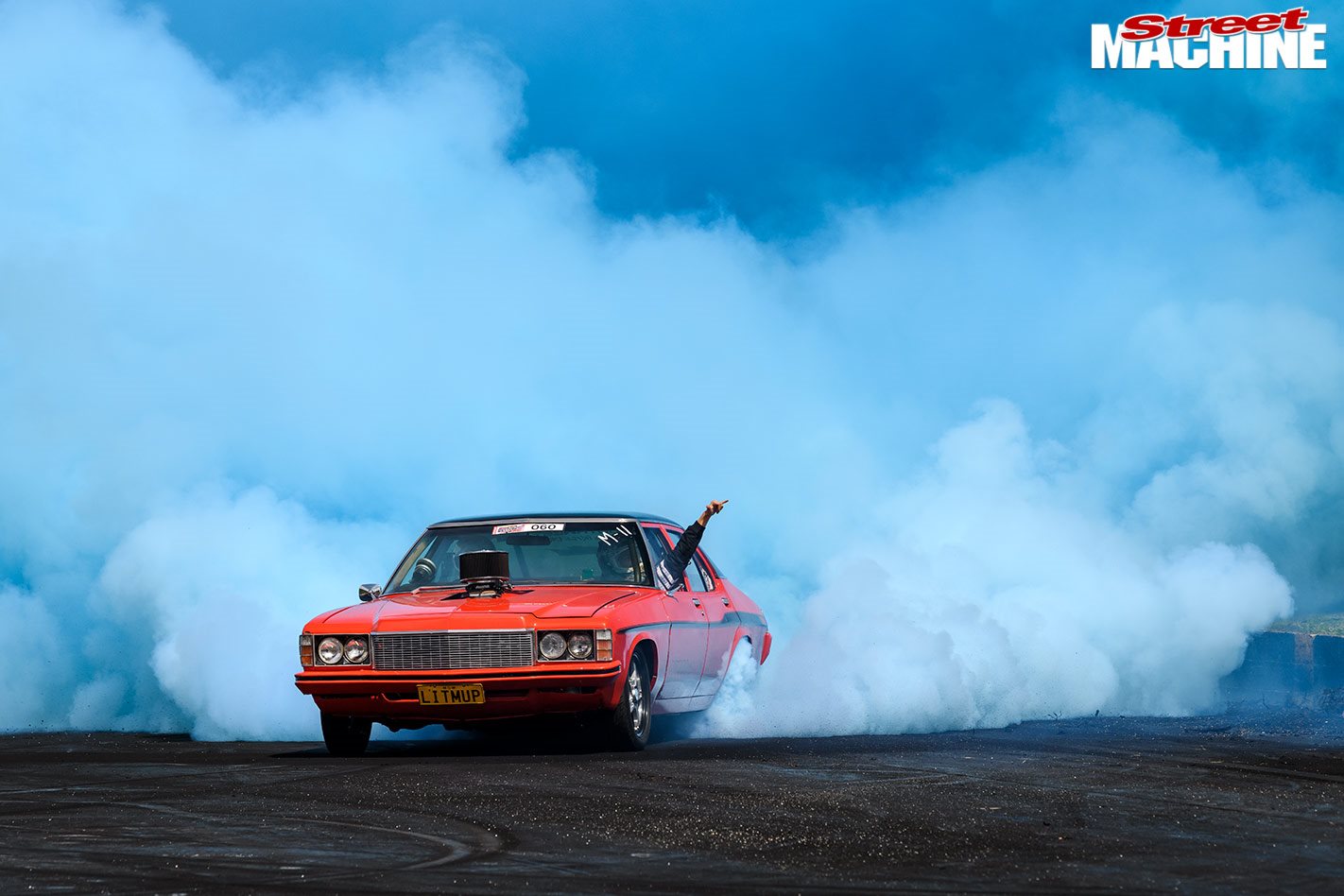 THE final day of Summernats Slam will follow a similar schedule to Day Two, commencing with grudge runs on the strip from 9am. There will be more action on offer at Skid Row, too, which also kicks off at 9.

The show ’n’ shine will continue, and judges will hand down their verdicts on the best cars on display. Motorkhana sessions will once again start at 9am, finishing up at 3pm. 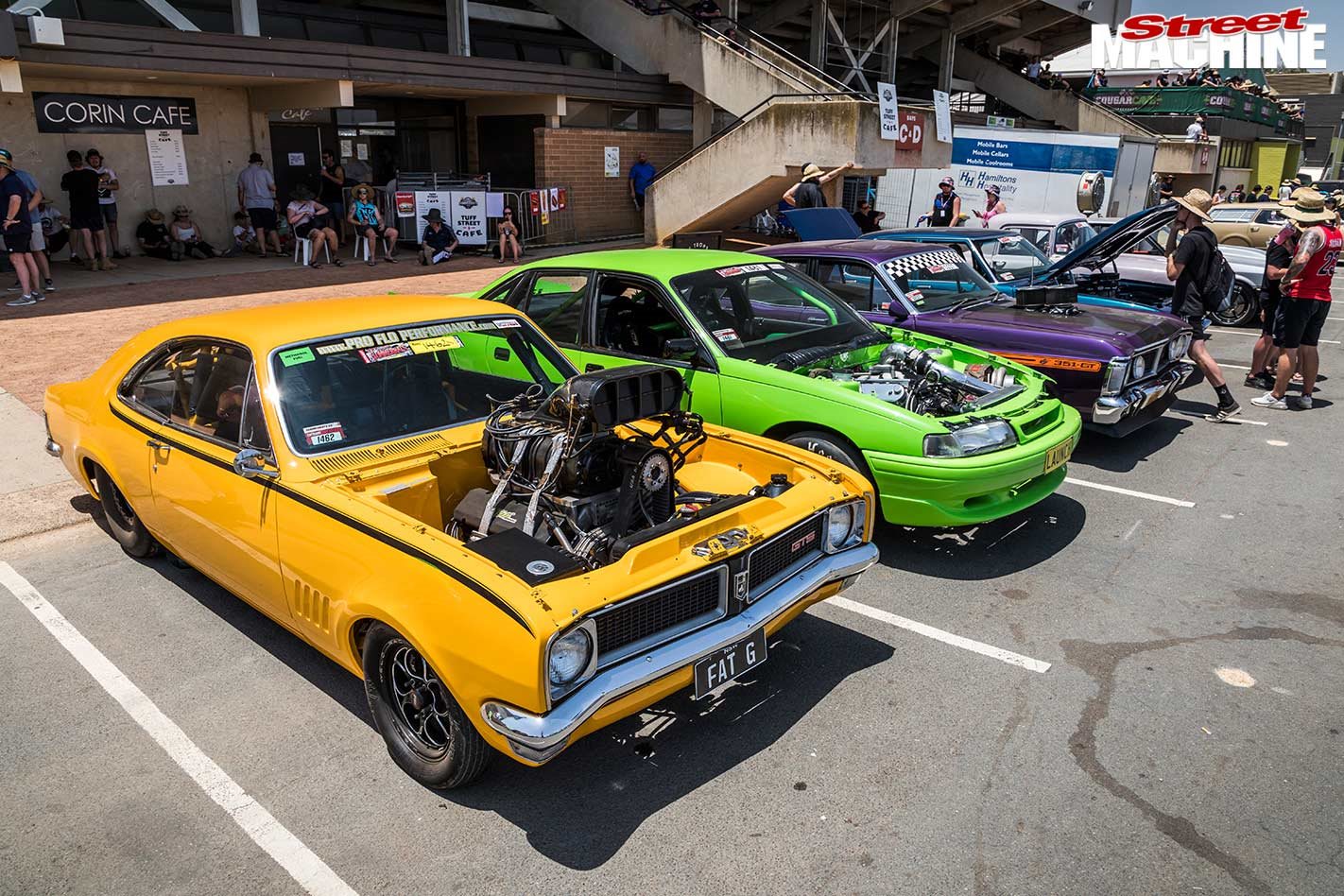 From 2pm, competitors will hit the burnout pad one last time, in a final battle for their share in $15,000 cash, as well as bragging rights of taking out the inaugural Summernats Slam skid comp.

With at least three Burnout Masters golden tickets up for grabs, it’s little wonder that big names like Lynchy, Jake Myers, Rick Fuller, Mick Brasher, Phil Kerjean and Fred Watson will be lining up to kill a set. Who will be crowned Summernats Slam Burnout Champion? Who will earn the chance to square up to the rest of the Burnout Masters at Rare Spares Rev Rock ’n’ Roll in 2021? We’ll find out when the winners get the spoils at the presentation, at 6pm on Sunday afternoon! 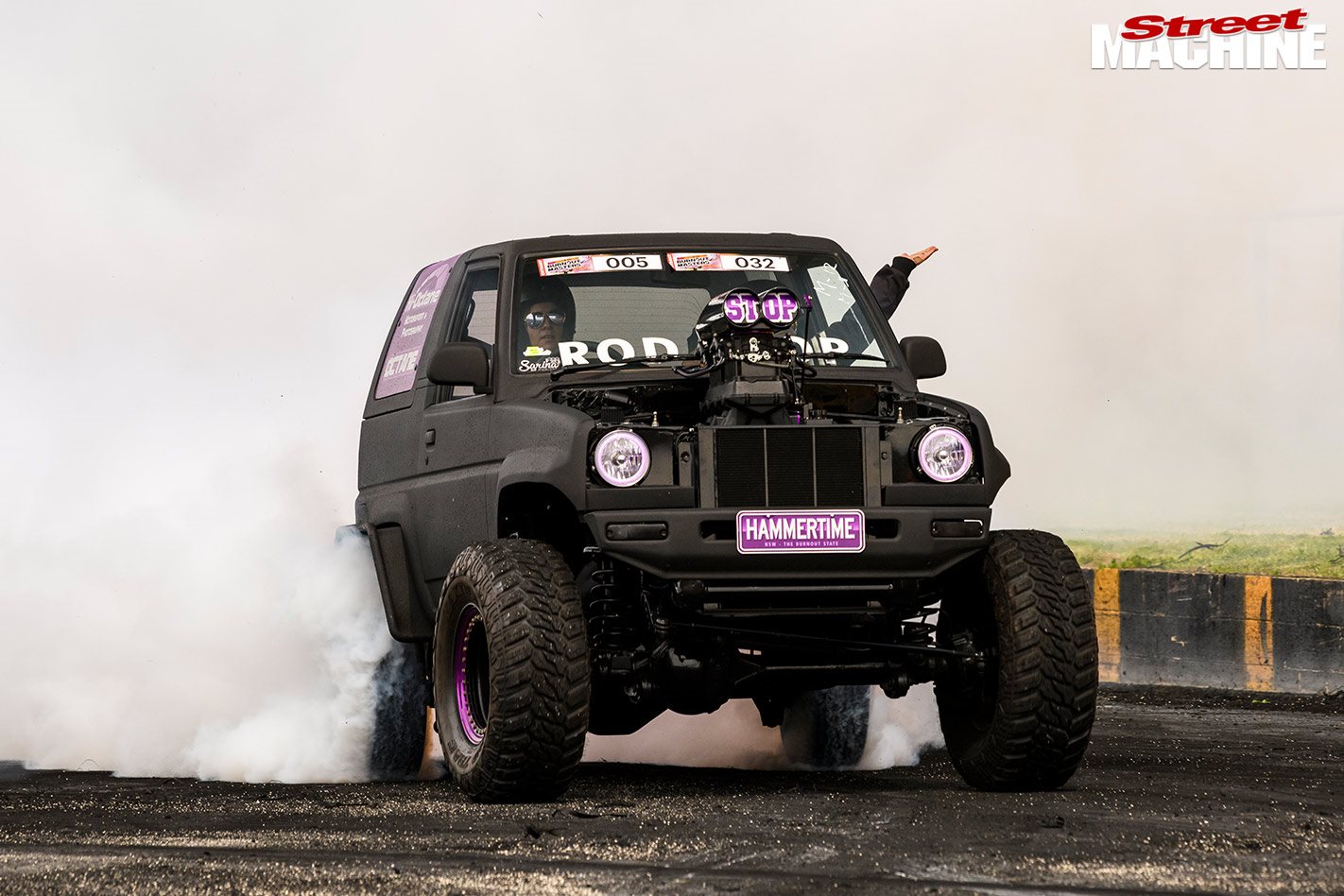