MUSTANGS always feature prominently at SEMA, and why wouldn’t they? The early fastback models are one of the most beautiful designs to ever come out of the Ford styling studios. There’s a million ways you can build them, but it would be tough to make one that’s more in-yer-face than this creation from Timeless Kustoms out of Camarillo, California.

Jason Pecikonis is the man behind the build, and while a lot of SEMA builds look purposeful, this one was most definitely built with a single purpose in mind – to tackle the Optima Ultimate Street Car Invitational. “I want to win Optima next year,” Jason declares. “I’ve had a couple of clients we’ve built cars for and we’ve run them in Optima and there have always been compromises because they’re more street car than race car. So I found a client who was interested in building a car that was more race car than street car this time.

“This is the farthest that I think I can push the envelope; this car has more technology in it [than might first appear]. It has 100 per cent MoTeC wiring in it; traction control, ABS, the engine and the transmission are all controlled by it. The data acquisition is all MoTeC. It really is a state-of-the-art race car with a 1965 Mustang body on it.”

For all those restorers wringing their mesh-backed gloved hands, don’t worry, this car started off as a lowly coupe, which then promptly had the roof and quarter cut off and a Dynacorn repro set of fastback quarters and roof attached. There’s not much Mustang left underneath, either: It has a complete Art Morrison chassis, independent rear suspension and C7 Corvette front suspension, carbon-ceramic Brembo disc brakes and triple-adjustable Ridetech shocks.

There’s no punched out Windsor hiding under the bonnet either, instead it’s one of those fancy all-aluminium Eliminator engines – dubbed Aluminator – from Ford Racing that are normally fitted to the GT350. While they make well over 500hp out of the box, that box normally has naturally aspirated stamped on the side. This one’s got boost, and not just one kind!

“The motor has a set of 68mm Precision turbochargers and a Magnuson 2.3-litre supercharger on it,” Jason says. “It has a complete Aeromotive fuel system and the car runs on E85, so it makes 26-28psi of boost all the time. It can run 1000rwhp pretty much all day long.”

Since this car was built to go around corners, there’s no beefed up ’Glide or Turbo 400 to handle all that grunt; this baby’s got three pedals and uses them all – well, sometimes. The EMCO sequential six-speed is paddle-shifted and you don’t need to lift or hit the clutch to shift gears. It’s the kind of stuff you normally see in a race car. Nuts!

The car also has Forgeline centre-lock wheels that were specially made for it –  19x14 out back and 19x12 on the front – with the back wheels clad in the new Kumho 355/35/19 tyre that was developed for the new Viper ACR.

While there’s a fair bit of show in this ’Stang, with its gorgeous fit and finish, attention to detail and fully trimmed interior – there’s even a/c – it has been built to run hard, and will be awesome to watch on track.

And Jason is itching to get it out there: “It needs to go on the dyno for a week and get the motor and the trans dynoed together and synced,” he says. “We’ll give the car a suspension set-up and an alignment and it’s ready to go. I’m so excited about next year I can’t even tell you.” While the flares may not be the most aesthetically integrated items on the car, they worked just fine on German touring cars and they do their intended job – keeping those massive 19x12 and 19x14 hoops out of the weather. 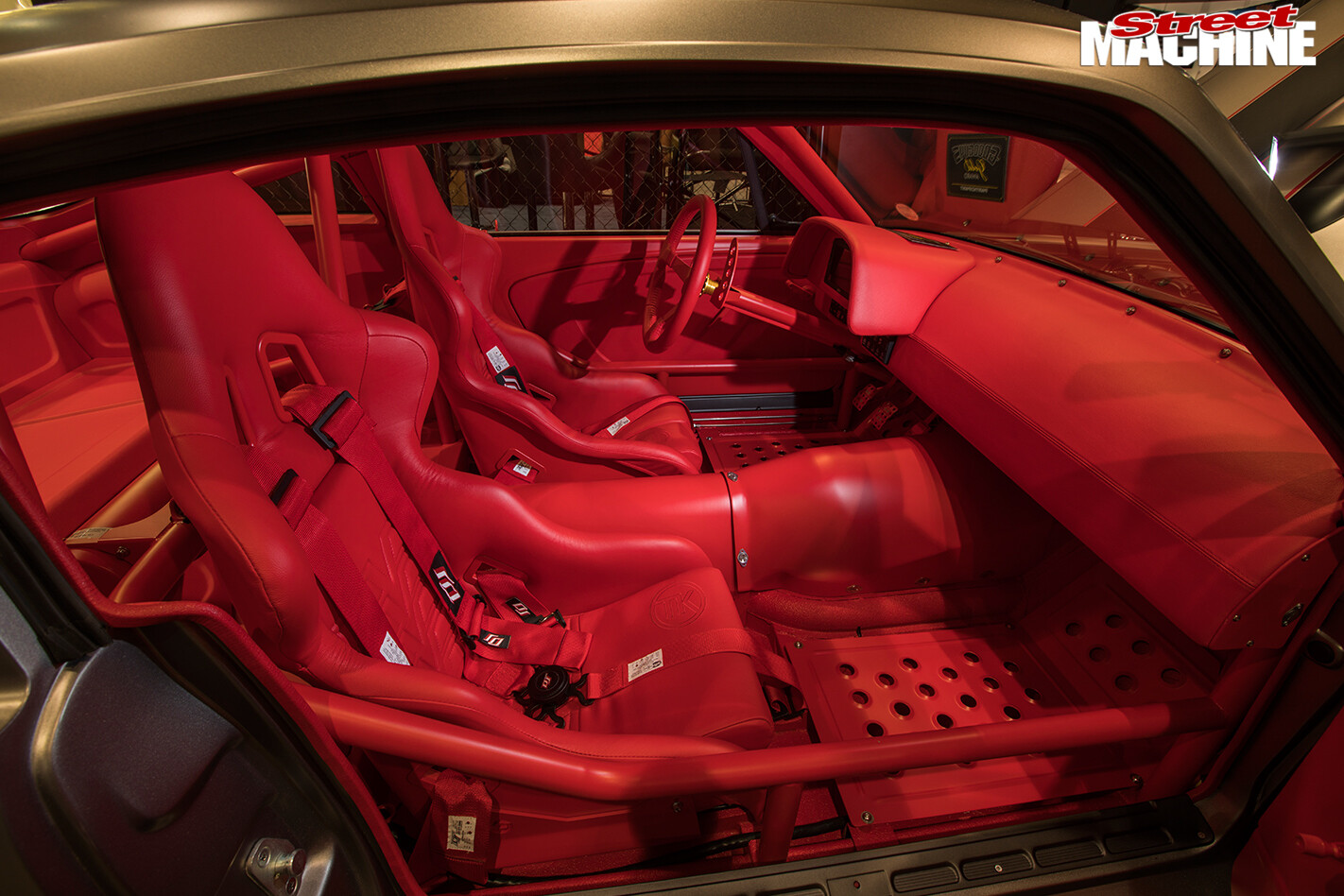 Inside it’s all business and all red; considering it’s mostly a race car, the fully trimmed seats, door panels and dashboard make for a pretty comfy office. There’s even a/c in there and a whole heap of MoTeC wiring, engine control and data acquisition. 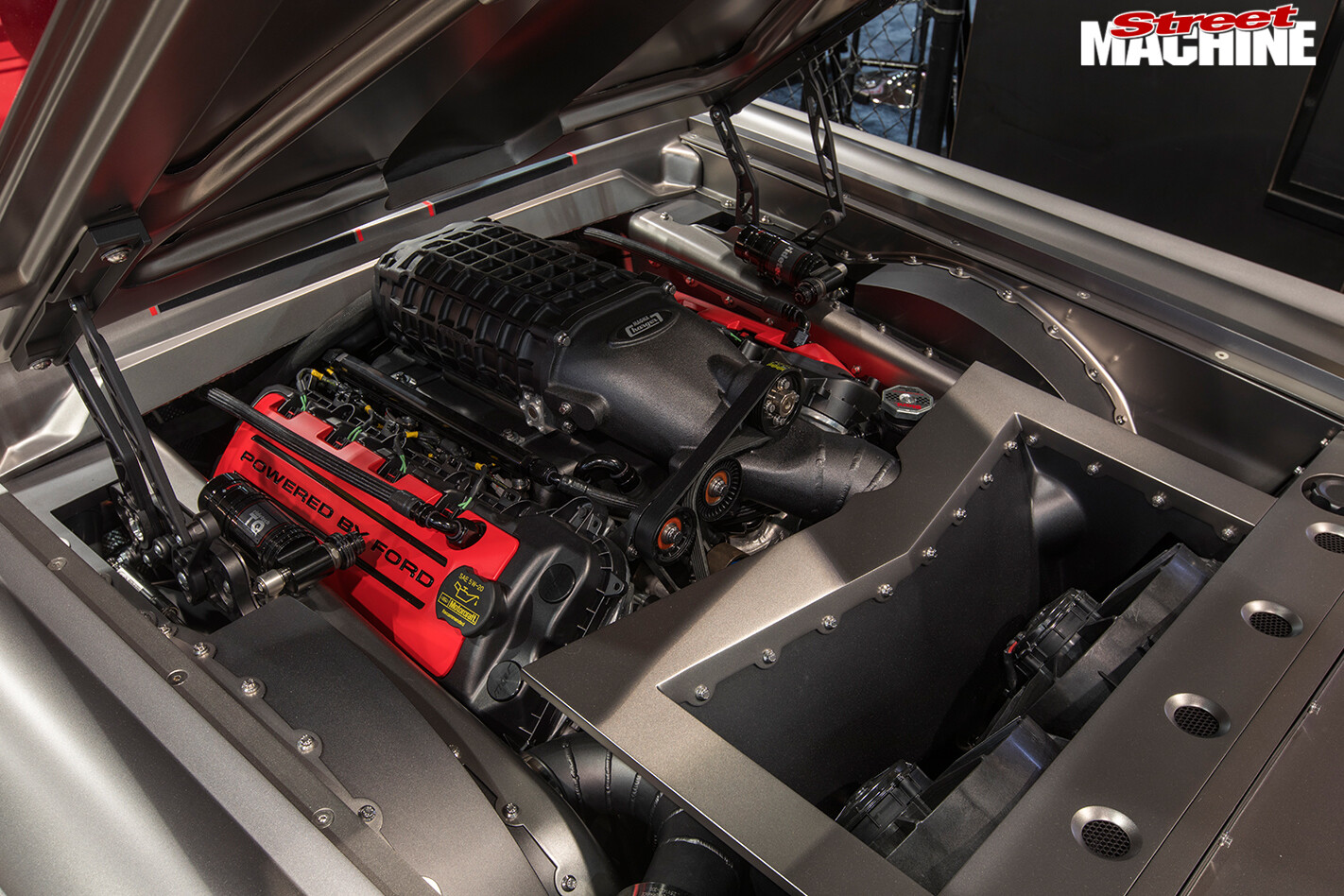 The 5.1-litre Coyote motor makes over 500hp naturally aspirated when fitted to the GT350. This one has been tickled up a fair bit with a pair of 68mm Precision turbos and a 2.3-litre Magnuson supercharger. On E85, this thing will make 1000hp at the tyres all day long. I’m digging the GT40-style radiator shrouding to extract the hot air out of the bonnet as well. It’s a sexy beast from this angle, which also shows off the Ferrari-inspired rear diffuser, a great way to get added downforce without adding drag. While that might seem like overkill, that’s what this car is all about.