Nick Crocitti has a ripper first go at a hot rod with his blown, slammed and naked 34' closed cab pickup

This article was first published in the March 2012 issue of Street Machine.

Building a hot rod is a dark art. Any rodder will tell you it takes good contacts, years of searching through swap-meets, even blood sacrifices to the tiki-headed hot rod gods. Not to mention most of your spare time and all of your spare cash. 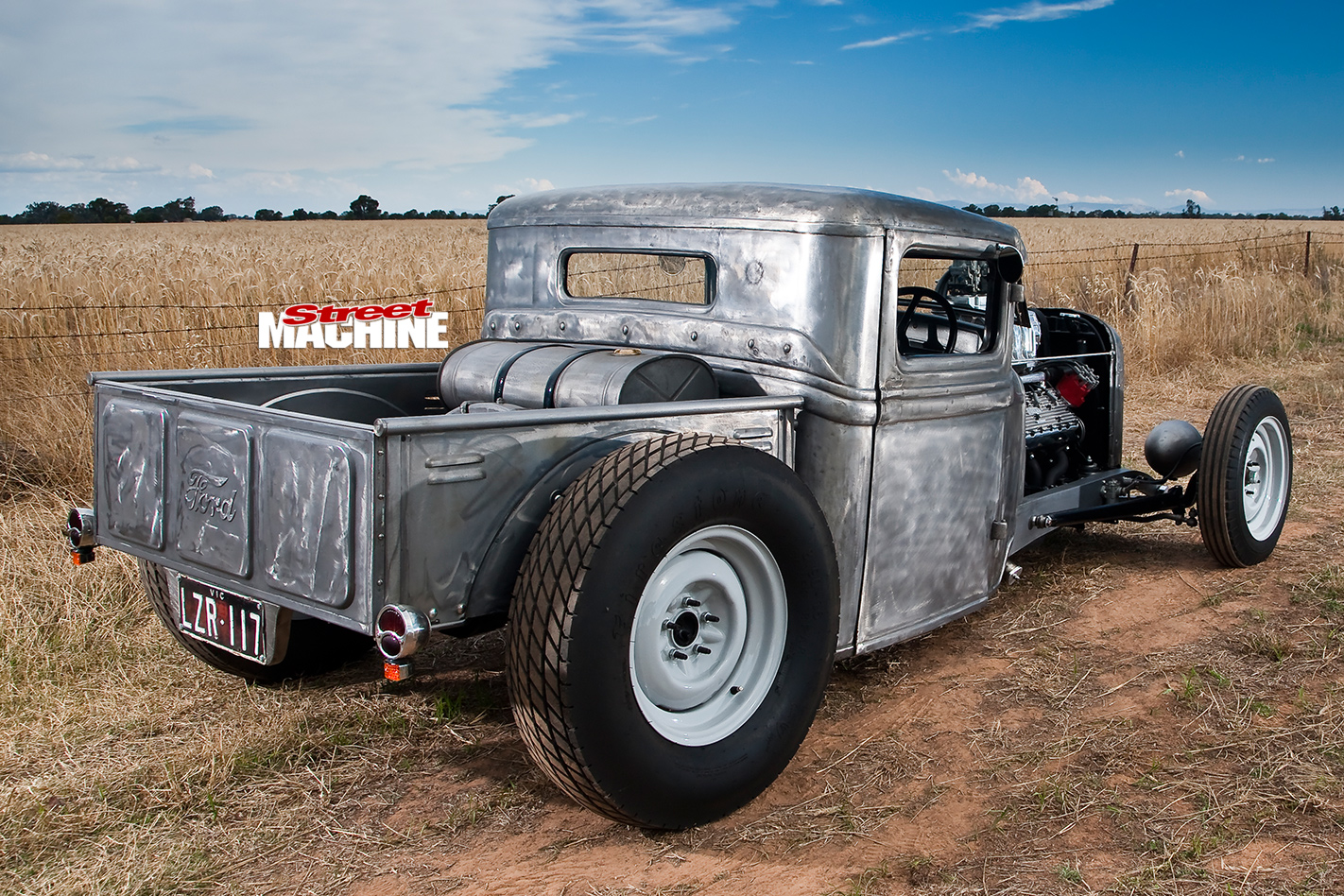 And then there’s Nick Crocitti, or Spud as he’s known to everyone, including his wife. He still a noob when it comes to classic iron.

“I’ve only been hot rodding — if you could call it hot rodding — for the past three and a half years,” he says. A retired panel beater, he fell into it when a mate took him to John’s Picnic.

“I had no idea this culture existed. I thought: ‘I need to be part of this,’ so I went about building that ’34.” 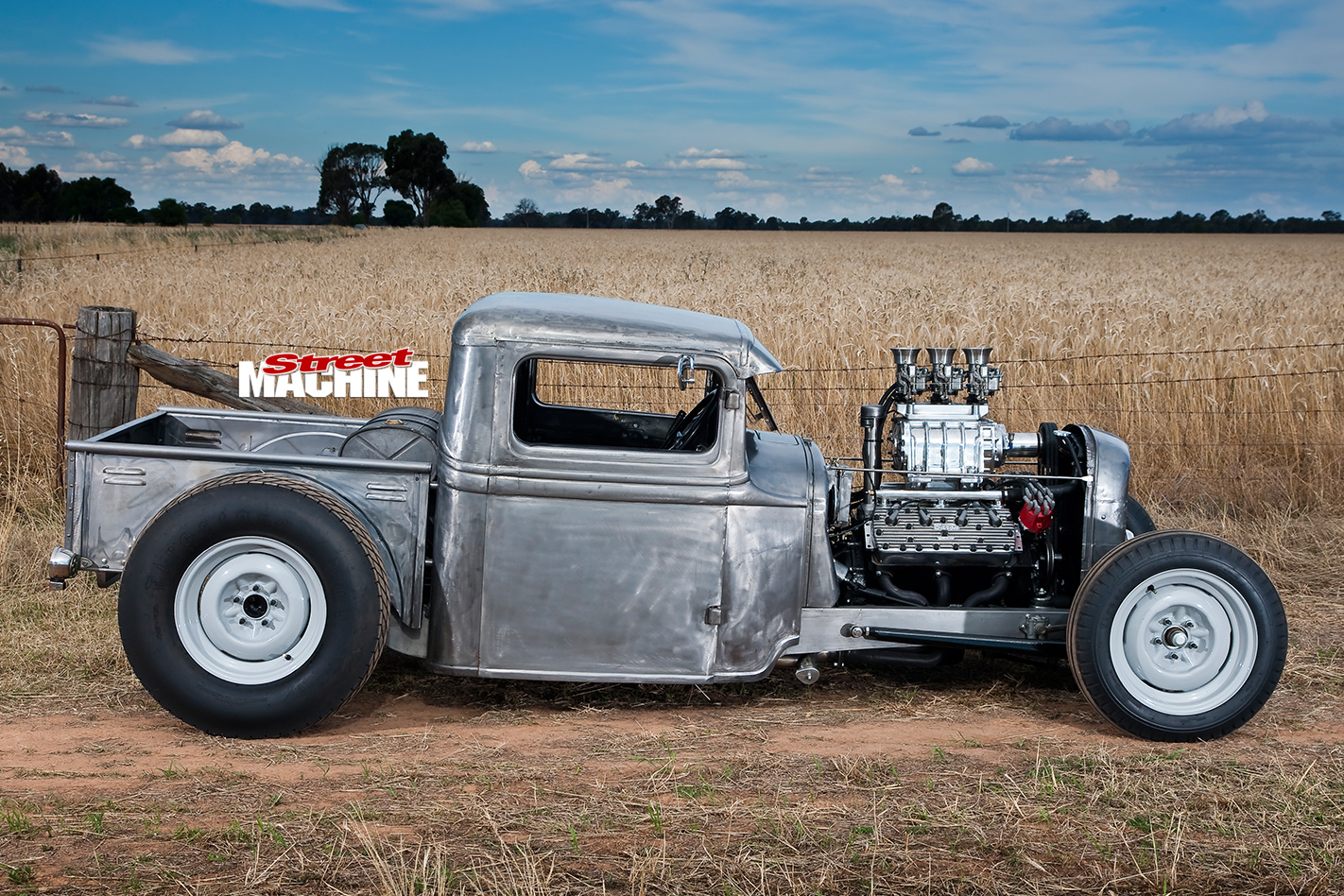 ‘That ’34’ is this slammed bare-metal pickup. “I tried to tick every box I could — chopping, suiciding the front end, channelling, kicking the back up and split bones,” Spud says. About the only thing he didn’t do was suicide doors. “I thought about it but I wasn’t going to gain much and it meant a bunch of extra work.”

It started with a cab brought in from the Canadian border by a mate. “He had another project on the go so we did a deal and he gave me the cab,” Spud says. “It was a wreck — no floor and the bottoms of the doors were gone.”

The first thing you need is a chassis but instead of buying a new one prebuilt or even grabbing a pair of rails, Spud built his own from scratch. 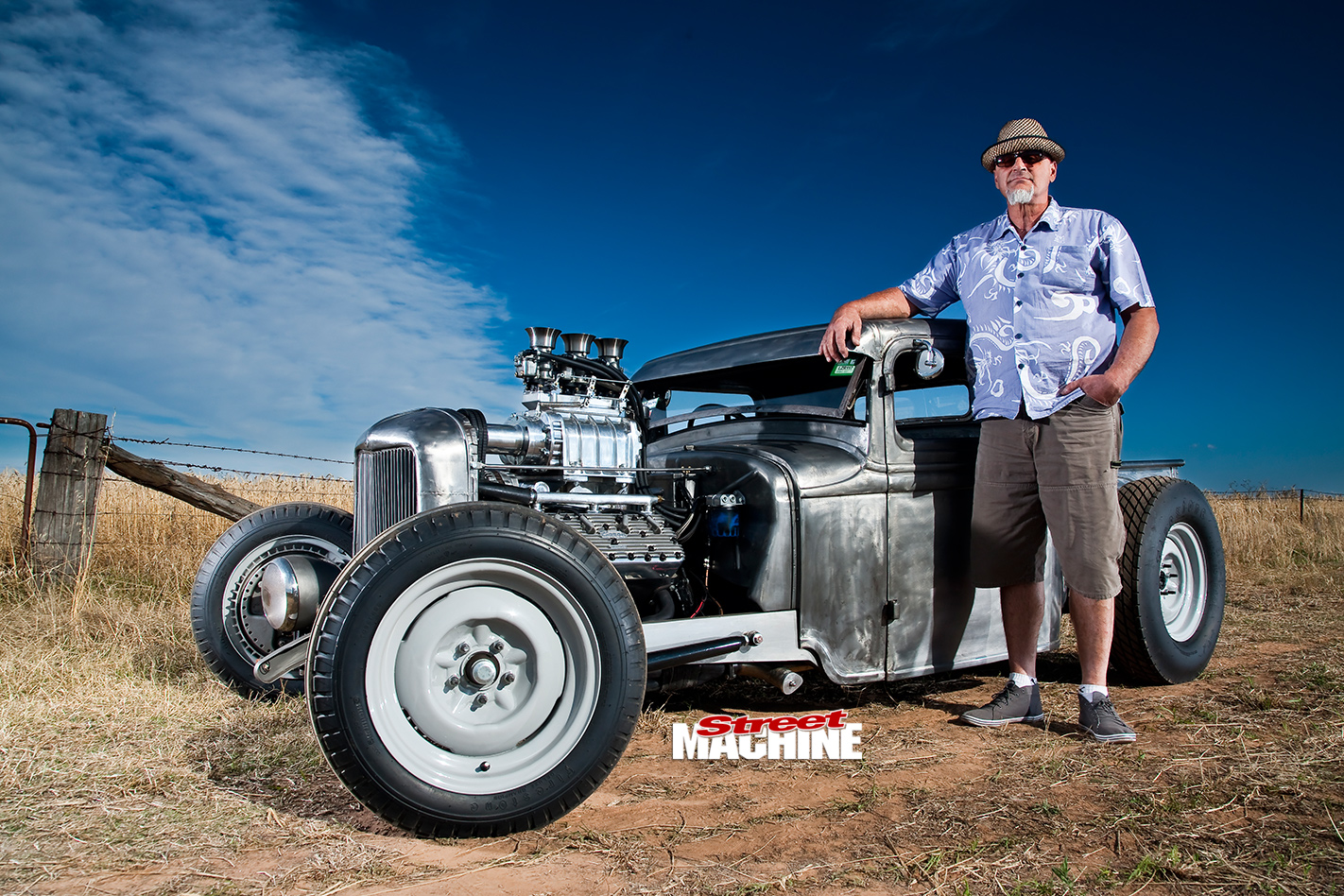 “Eight lots of three-mil plate,” he says. “I made up a jig and built an original-style chassis, then looked at it and thought: ‘No, this is not the way to go.’ So kicked the back up 22 inches, Z’ed it four inches in the front and put ’48 crossmembers in it.”

After blasting the cab to remove the rust, Spud chopped it six inches at the back and a tad more in the front to get the rake he wanted. He also had to re-skin the doors and weld in some fresh metal beside the rear window, to repair the cab and conceal the chop lines.

“It was a three-ton truck and whatever they carried on the back of it constantly belted the roof; it was caved in about six inches. I tried not to use any new metal — I sourced a lot of secondhand rusty steel, blasted it and used it to build the car.” 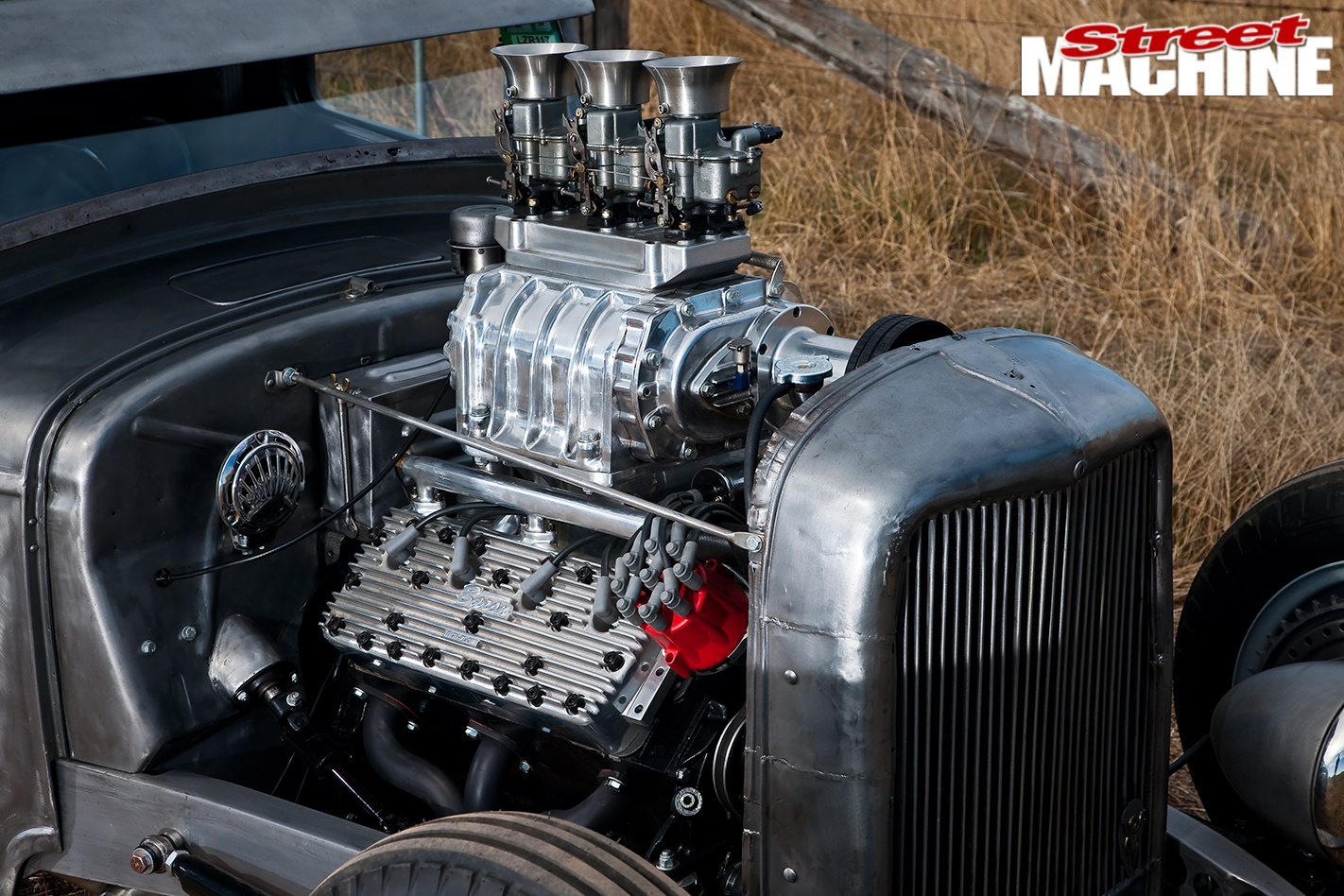 Channelled over the custom chassis, the body sits just right and the ’48 crossmembers dip below the chassis line, which allows the floor to sit below the top of the chassis. That creates a little extra room but it’s still tight and Spud had to do a lot of work to get the pedals, handbrake and shifter in the right spots.

The seats were custom-made in 1mm sheet steel, with 10mm rod welded around the edges so they hold their shape. Light padding softens the ride. It’s basic inside, with just the standard gauge panel and a few extra white-faced dials to keep an eye on the blown flathead. 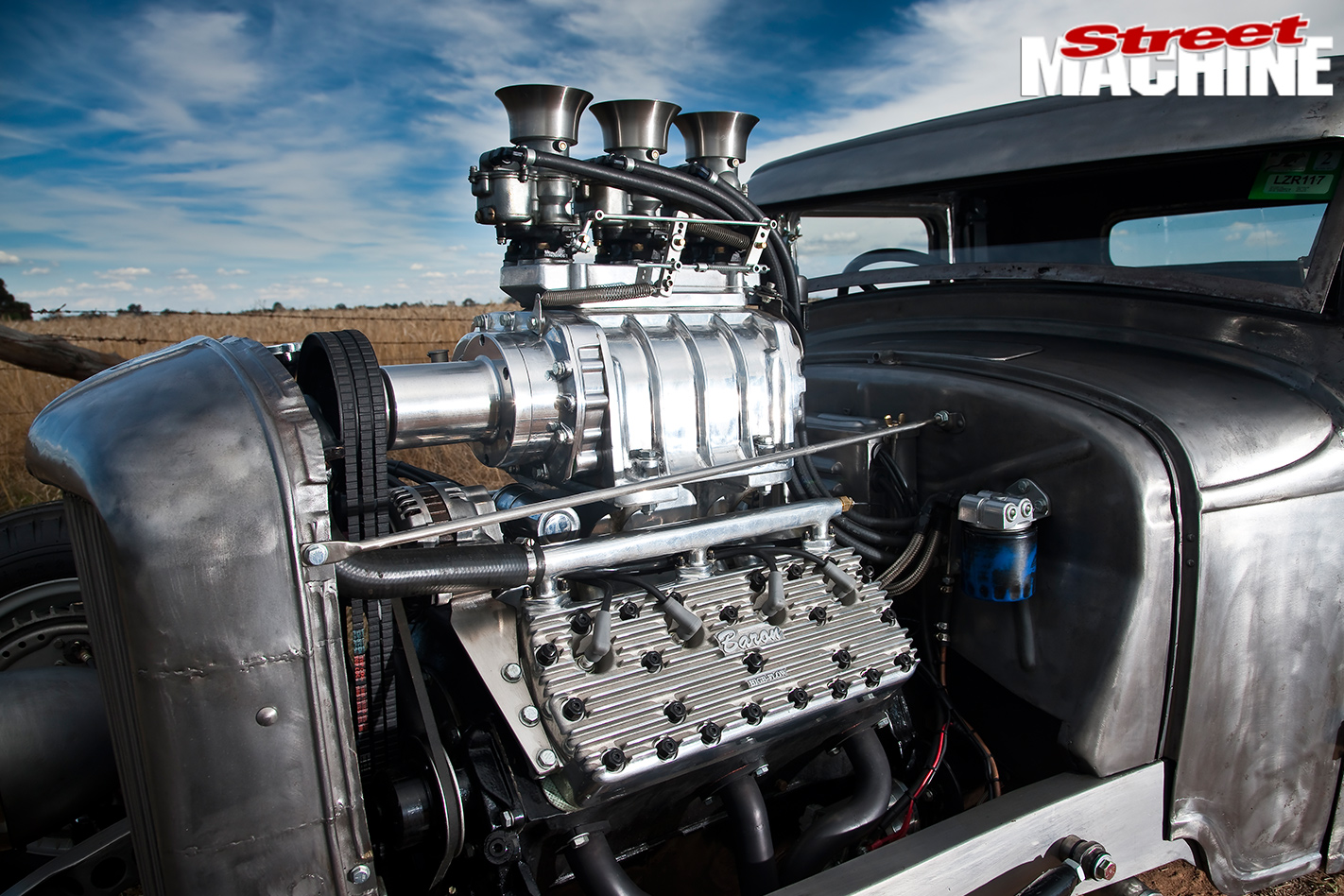 Spud says the engine is where things got really interesting. “I wanted a flathead. I did a lot of reading and spoke to a lot of people, even a few guys in the States, but they were no help. Then I started buying bits and pieces.”

At least he didn’t have to look far for an engine builder: “I’ve known Chris Noonan for years. He builds ski-boat endurance high-rpm engines. I showed him all this stuff I’d bought and he said: ‘What a bunch of old rubbish!’ I told him that from what I’d read, this was how you did it. He took all that information and threw it in the bin. He said: ‘I’m building this the way I want to build it.’ I said: ‘Okay’ and stood back.” 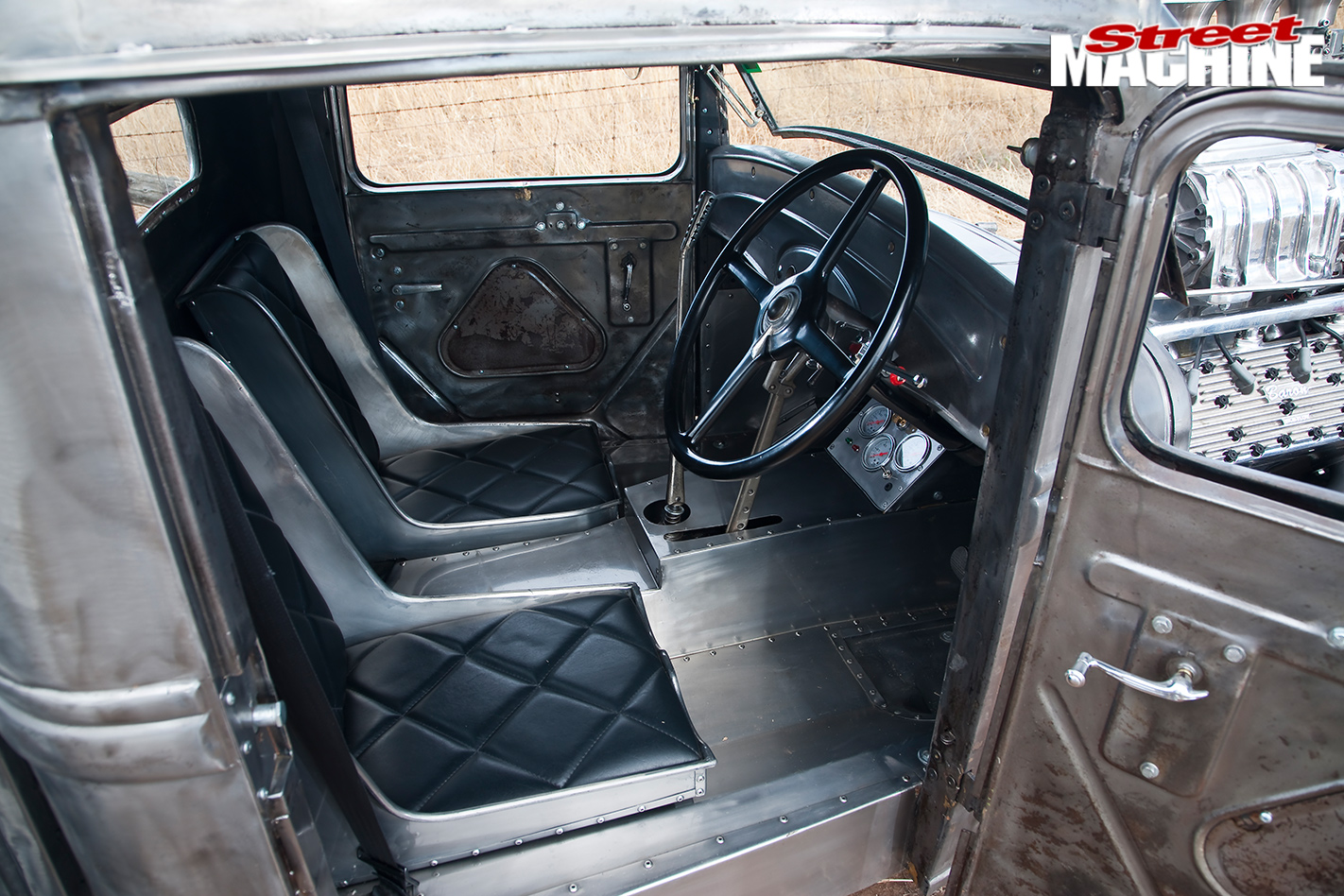 Chis fitted the standard 239ci 8BA block with billet caps and a girdle before deburring and porting the block and reworking the oil system. The crank and rods are Scat items that lift capacity to 286ci with a set of Ross forged pistons filling the cylinders. Up top, the aluminium heads are Baron items that Spud cajoled out of a guy north of Albury.

“He’d bought them years ago but never used them,” Spud says. “I ended up paying a lot of money for these heads but they’re what I wanted.”

Then there’s the 4/71 GM blower he got from a mate. Rebuilt and mounted to an adaptor plate on a boat intake, it breathes through three Ford 94 carbs and shifts almost the same capacity as the engine itself. 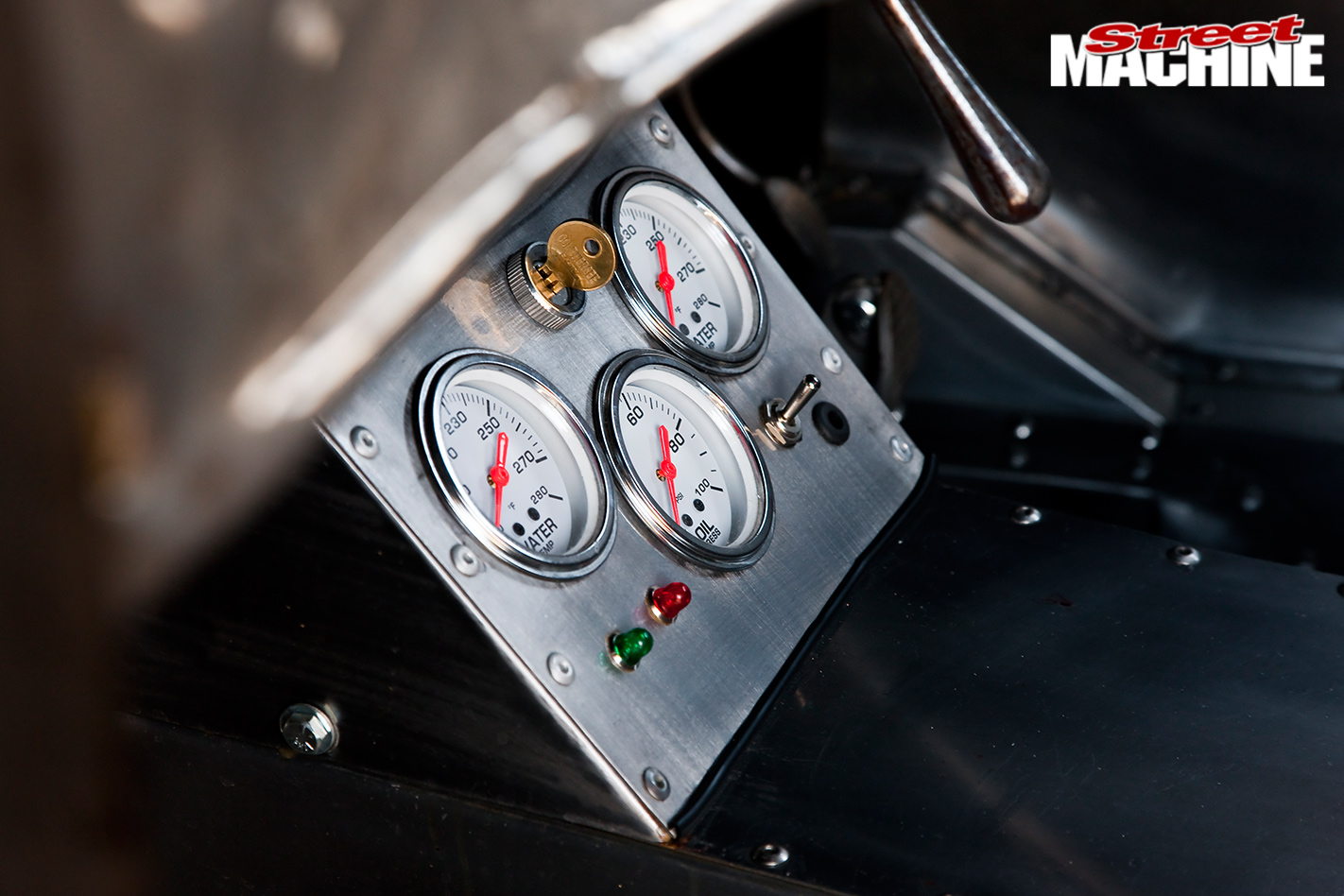 Running 10psi, the blown flatty produced 280 horses on Danny Selva’s dyno but Chris wasn’t happy so he tinkered and released another 20 ponies.

In this day and age 300hp might not sound much but the standard 239ci flathead made just 95hp, and Spud’s little pickup only weighs around 850kg so with 300 horses it’s lively. “It’ll smoke them tyres like you wouldn’t believe,” Spud says.

More importantly, it erupts in a cacophony of beautiful noise. With a choppy Isky 400 cam, decent static compression and the blower doing its thing, it’s an automotive choir played through a twin two-inch stainless system. 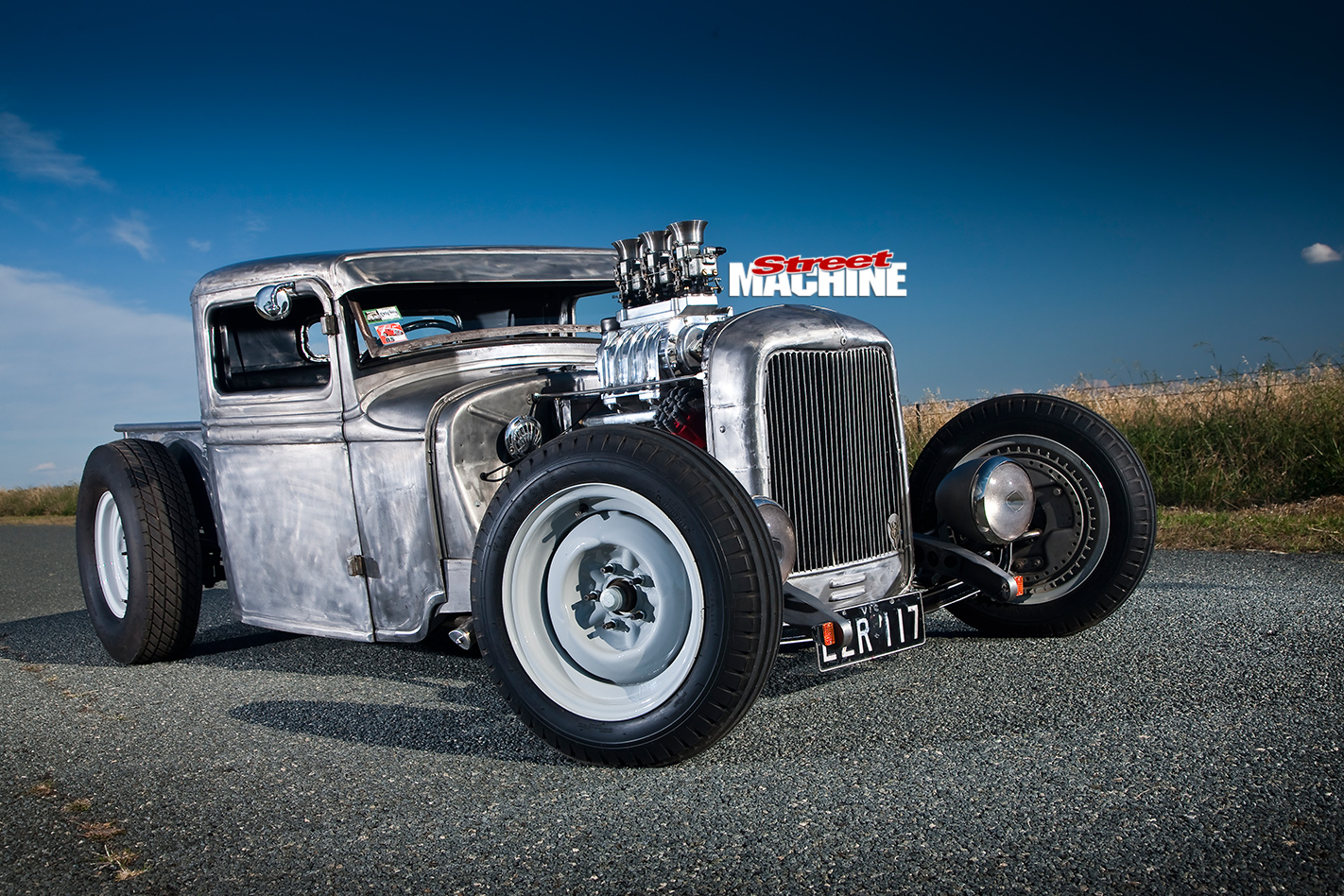 Naturally there’s a stick shift — you don’t put an auto in a car like this. Spud kept the driveline simple with a Borg Warner single-rail ’box and a nine-inch diff.

“She’s a handful,” Spud admits, “but I’m happy with the way it turned out. It’s not registered so I’ll take it to a hot rod show and just cruise around.”

It gets plenty of attention — something he wasn’t prepared for the first time he bought it out.

“I spoke to some hot rodders at Newstead, guys who’ve been rodding all their lives, and they said to me: ‘This is a work of art!’” 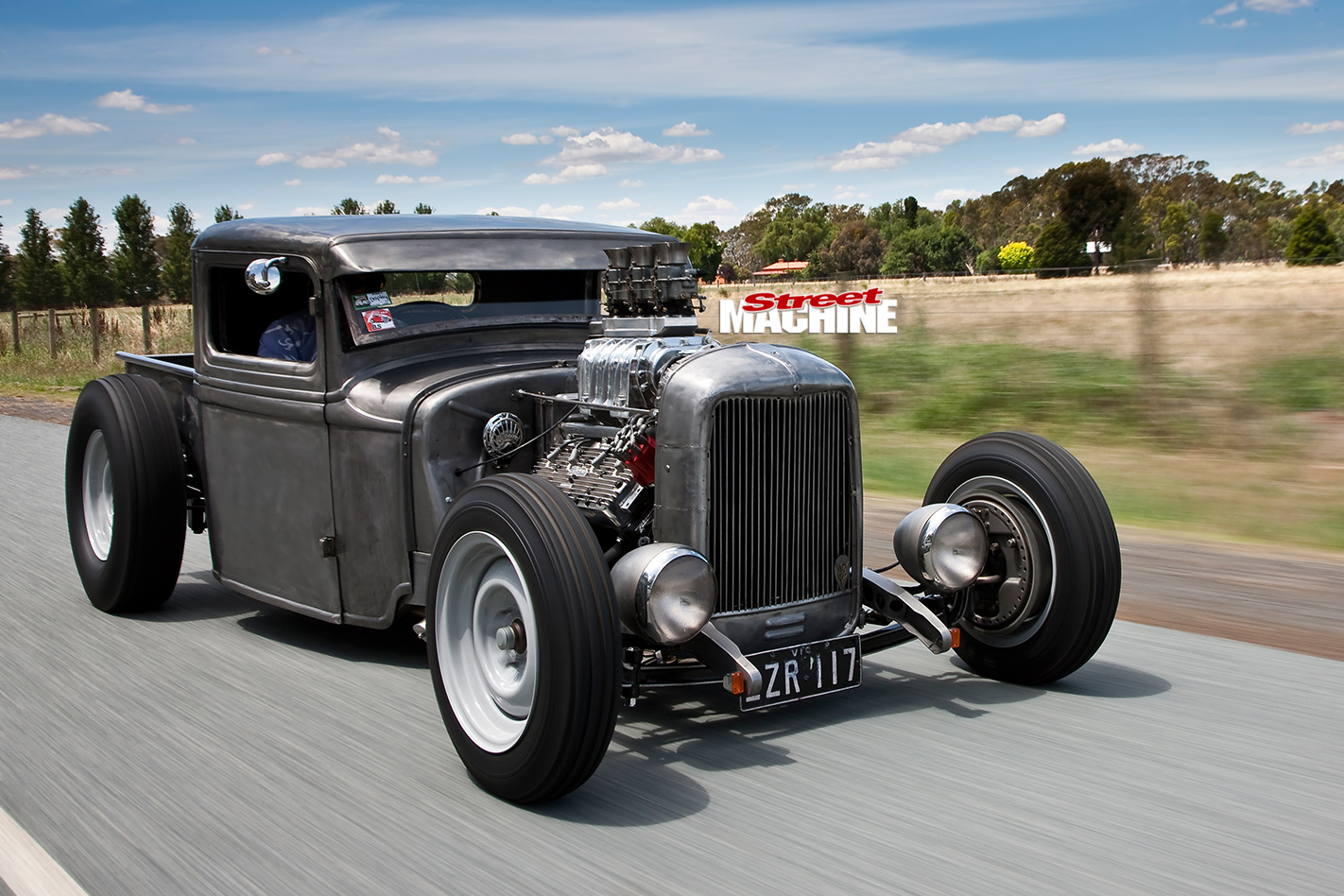