John Hutchings loves Fords, Windsors and tunnel-rams. That explains this XK ute, then!

It might look like a bit of an 80s throwback, but this Ford XK Falcon ute is brand new and done right

THERE are three things that John Hutchings loves: Fords, Windsors and tunnel-rams. And he combined them when creating this beautiful and bad-arse XK Falcon ute.

It’s not the first time John’s built something along these lines. For over 30 years he owned an original XW GT Falcon – you know, back when you could own a GT and modify it and people wouldn’t string you up from the nearest tree. Admittedly it was mostly engine mods, but it ended up being a little bit too angry for the street. 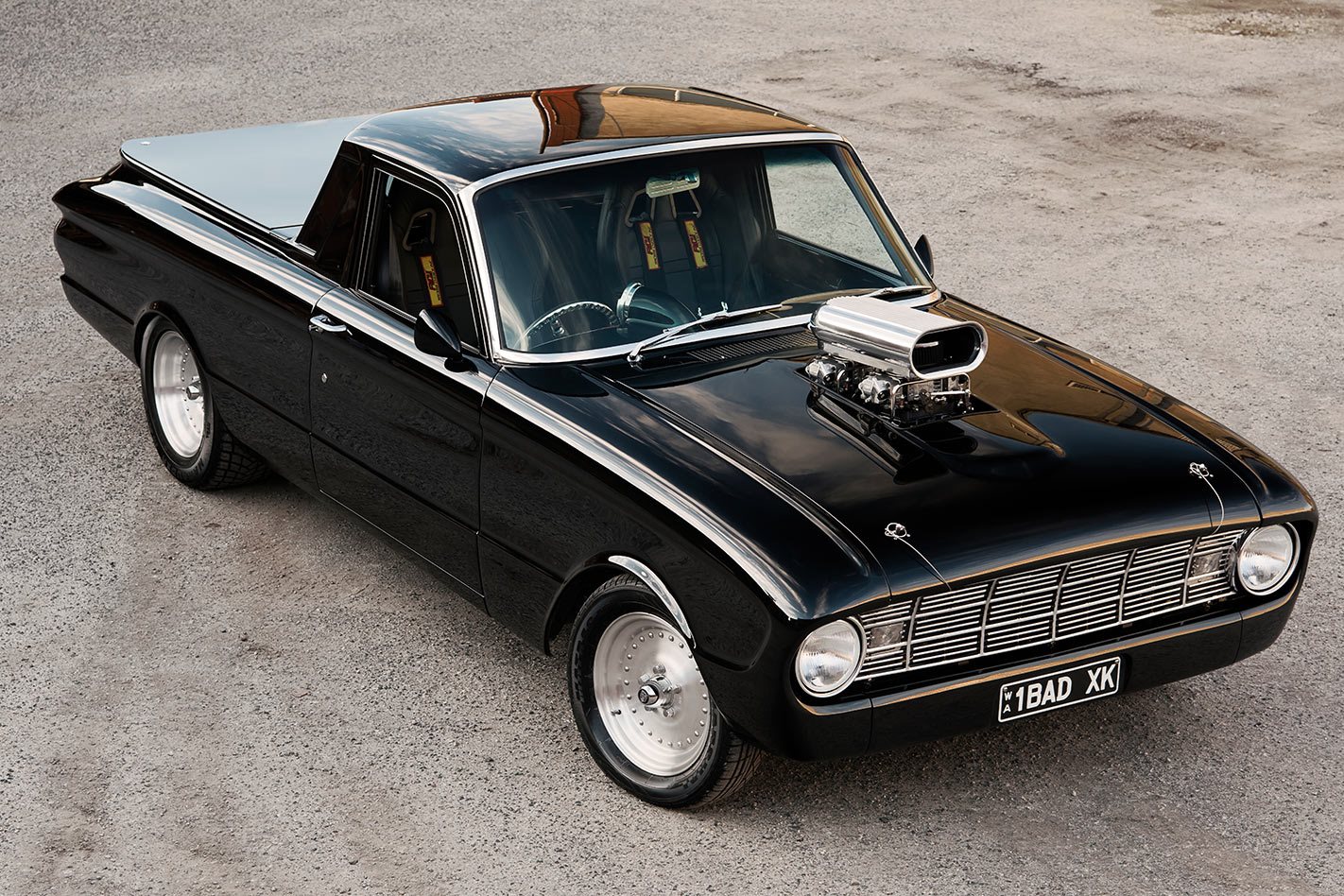 Terry Roney from Full Circle Restoration was confident that the bodywork would be good enough for black. He was spot-on, as indicated by that razor-sharp horizon line. A set of front guards were sacrificed to radius the rear wheelarches – a great old trick that is quite often met with disgust from the wrecked-a-classic crowd

All you GT lovers out there can put your keyboards down – John ended up doing a full resto on the car, back to original. But then he had a different problem.

“It was immaculate; in fact, it was too nice,” he says, “and I was always worried about damaging it.” 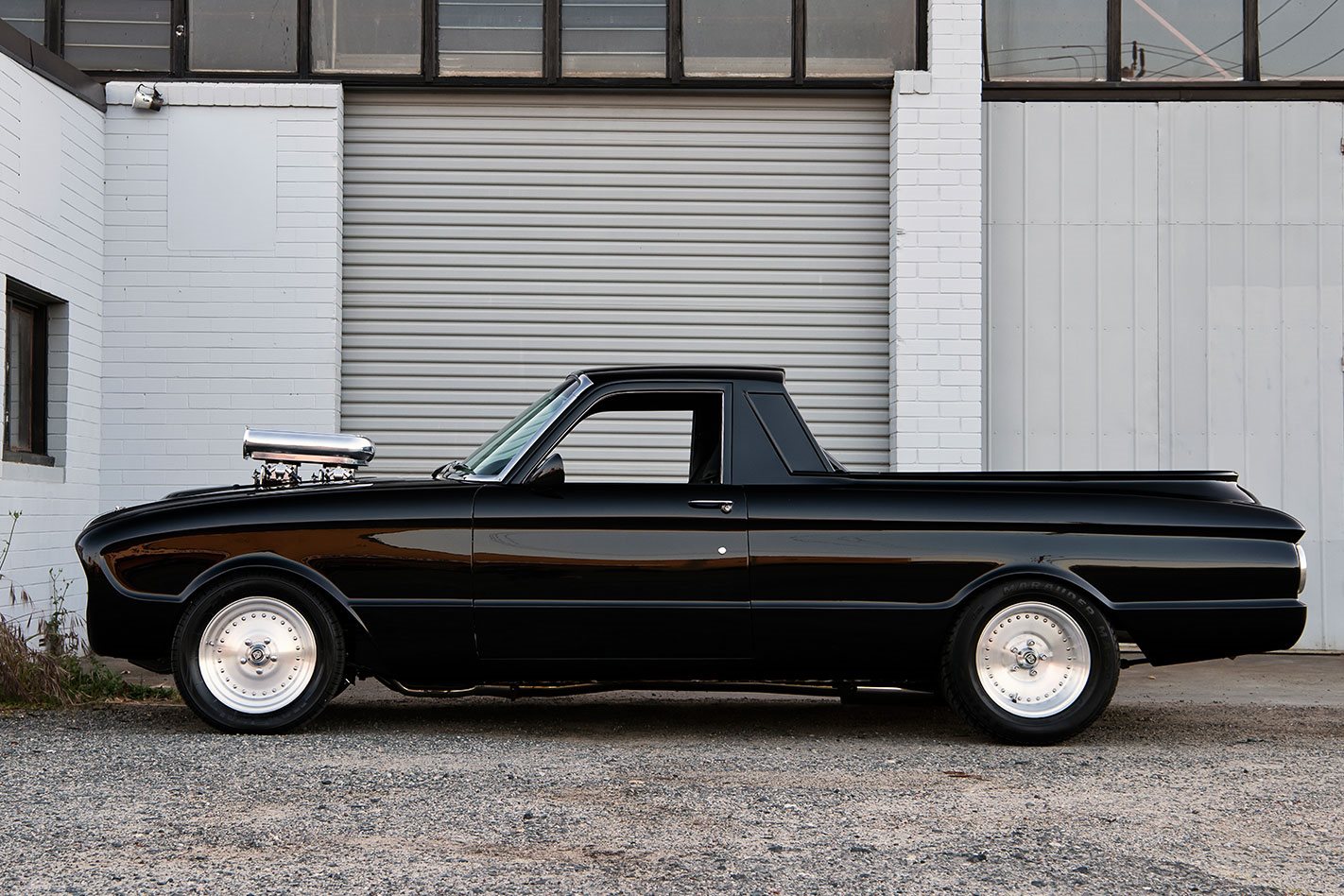 Stance is everything, and John's ute nails it. There's a narrowed nine-inch and mini-tubs out back that help tuck in those 265 tyres, and teh smoothed tailgate, flat tonneau and rolled pan make for a super-clean look

John took a break from cars for a while, but then the bug started to bite again and he went on the hunt for something neat he could cruise around in.

“I wanted something I could just jump in and drive, something that was already built,” he says. “I spotted the XK for sale over east and it had a lot going for it: the V8, nine-inch and some nice custom touches.” 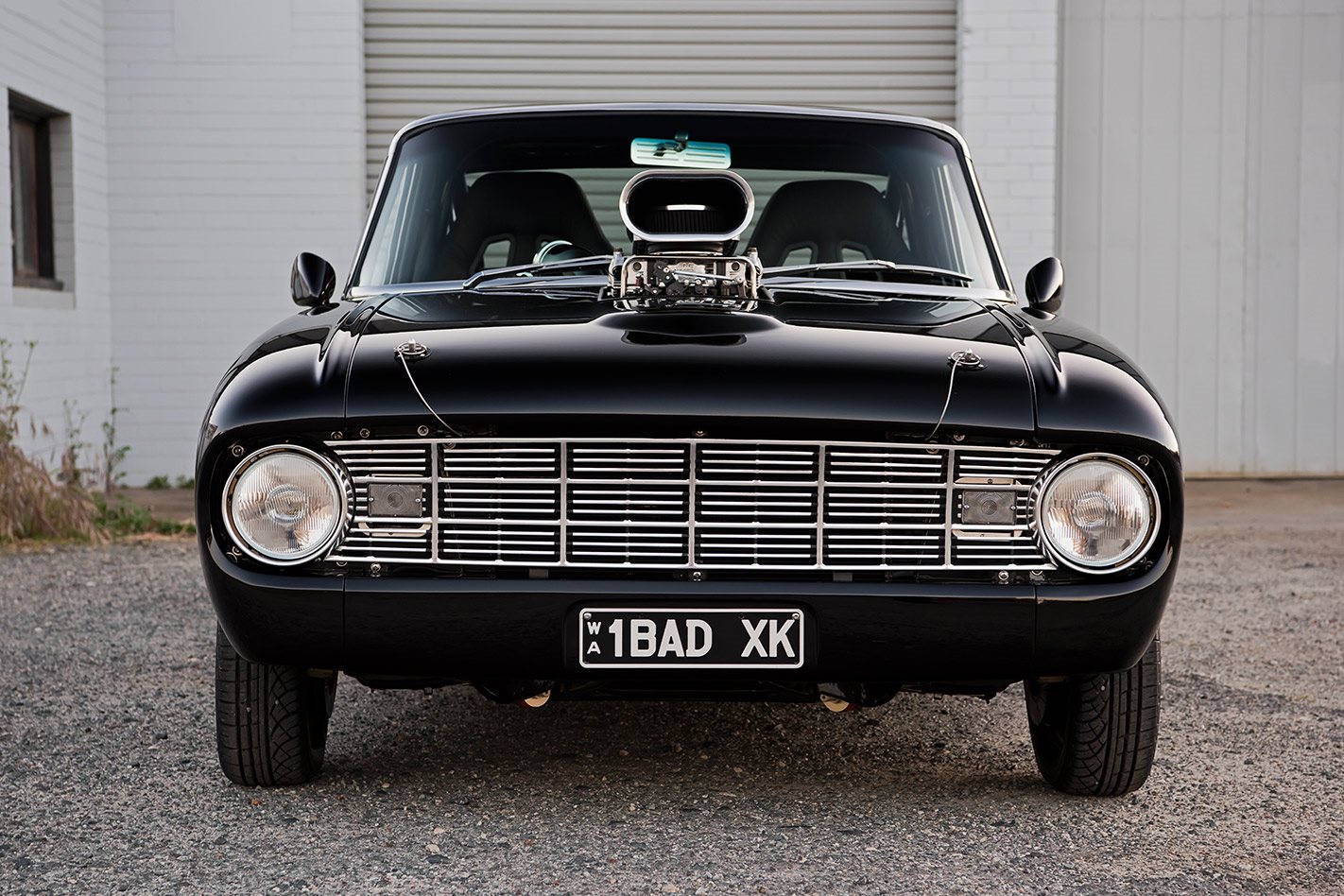 “There were lots of issues that needed attending to, and you could have just bodgied it up, but that’s just not how we roll.”

It was a pretty good buy, but John reckons it was a bit of a slug. “It was either weak as piss or on its way out,” he says, which was all the excuse he needed to start adding his own touches to the car. “I wanted a bit of a tough streeter, but it did get out of control – as they do. As we needed to pull the engine out to put the Windsor in, we wanted to repaint the engine bay. As we started looking around we figured we might as well strip it back and paint the whole car. 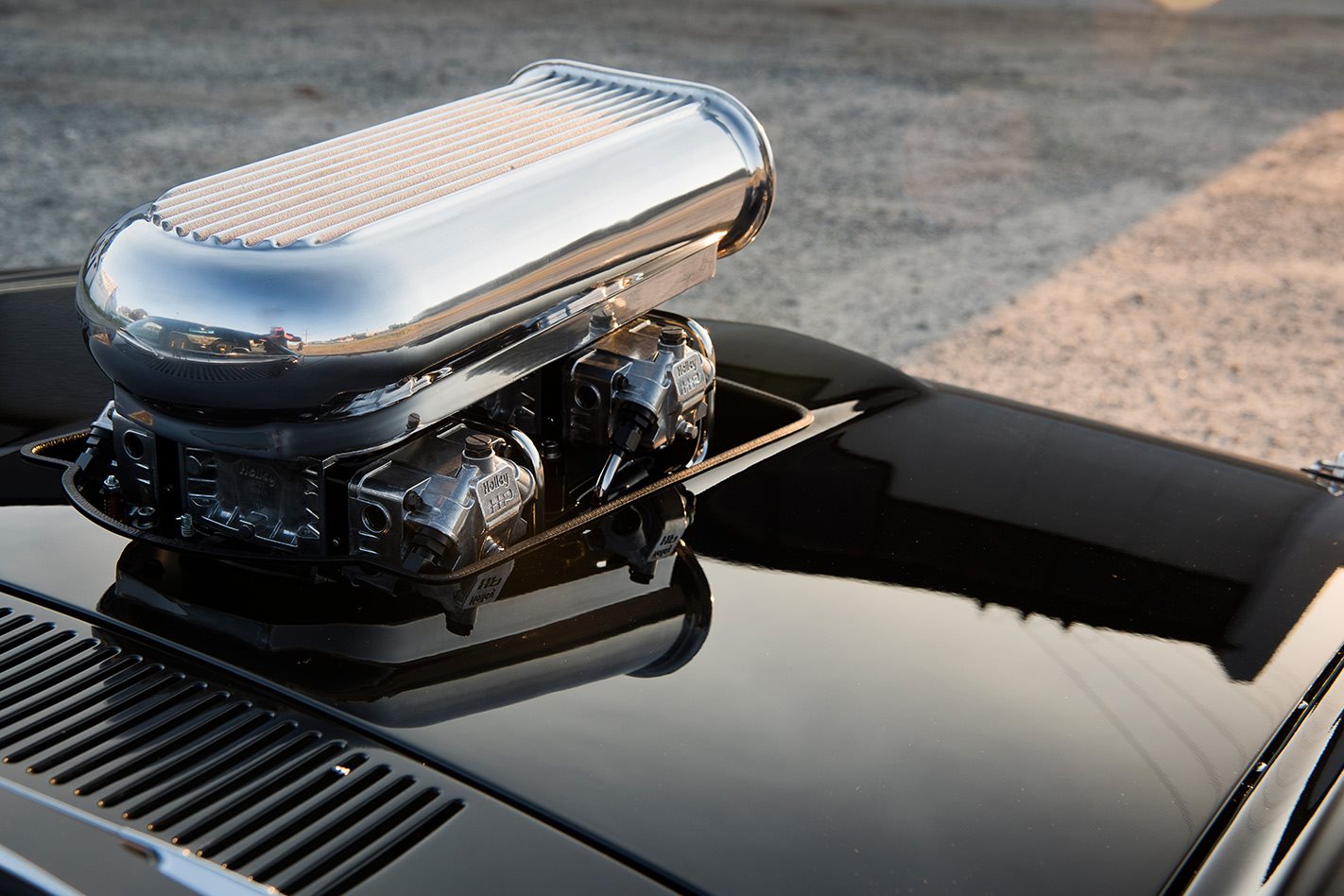 When John bought the car it already had the rolled front and rear pans, radiused rear wheelarches, a nine-inch and an RRS front end, along with same-brand notched shock towers and rack ’n’ pinion steering. Apparently the car was a development mule for RRS back in the day. While most of the hardware has stayed in place, the front and rear pans were replaced, and frenched number plates added. The pans were rolled up by Craig Douglas Auto Bodies and then the body was massaged to perfection at the skilled hands of Terry Roney from Full Circle Restoration.

“We scored some really nice doors and guards from Tony Devlin out at Superoo Falcon Spares and a couple of nice bonnets. We’ve got one set up with a reverse-cowl for when I run the Edelbrock Air-Gap and 750 Ultra HP, and one with the hole in it for the tunnel-ram. That’s probably just in case I get arrested one day,” John laughs. 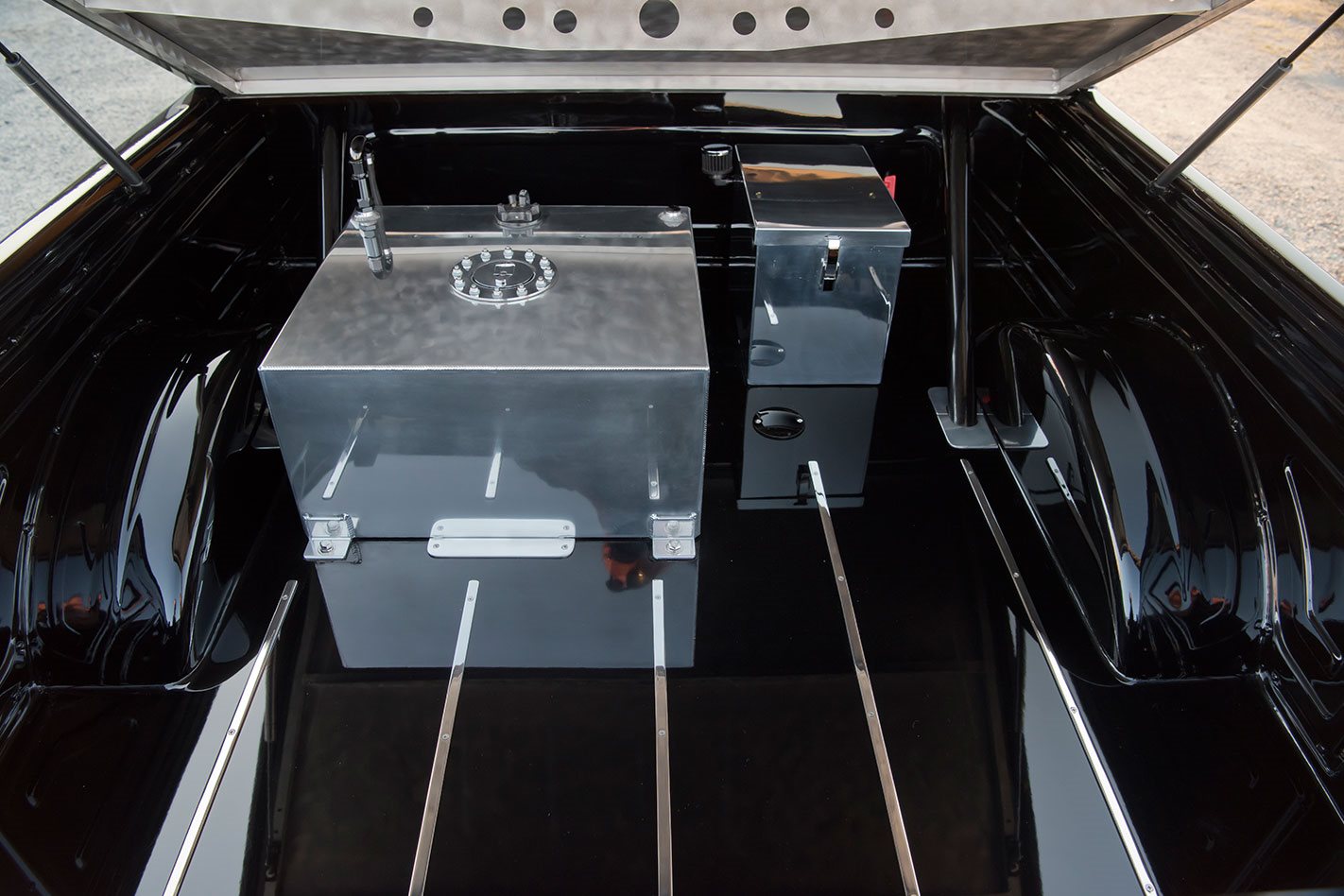 The car was originally painted sky blue, but it’s tough to go past a jet black paintjob if you want a tough-looking car, and Terry assured John that the car would be smooth enough to paint black. Looking at the photos, you can see he wasn’t joking – it’s as if the car was dipped in a giant vat of black ink.

When it came to the drivetrain, John knew exactly who to talk to. 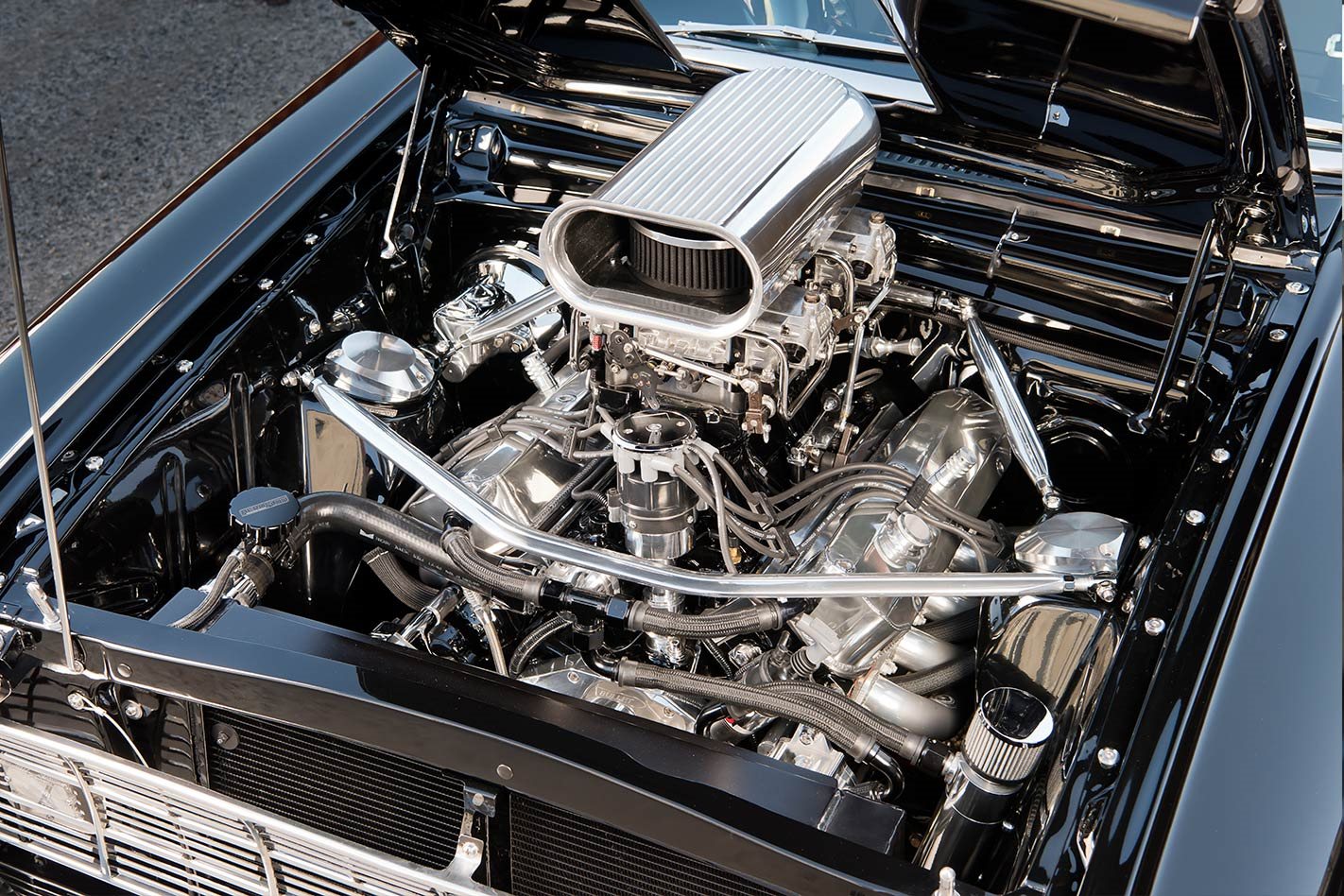 While the car was originally fitted with a 351 Clevo, John has always been a Windsor man, so it’s a still a 351, but a better-looking one. The Weiand tunnel-ram and twin 600 Holley Ultra HPs don’t hurt the look, either

“John Hollings did the whole lot; he knows everything about Fords,” he says. “He can pull everything apart, from transmissions, diffs, motors, he does all his own head work – everything. He’ll buy a brand new car and pull it apart and check it!”

That attention to detail and fussiness came in handy when putting together an engine combo for the ute. 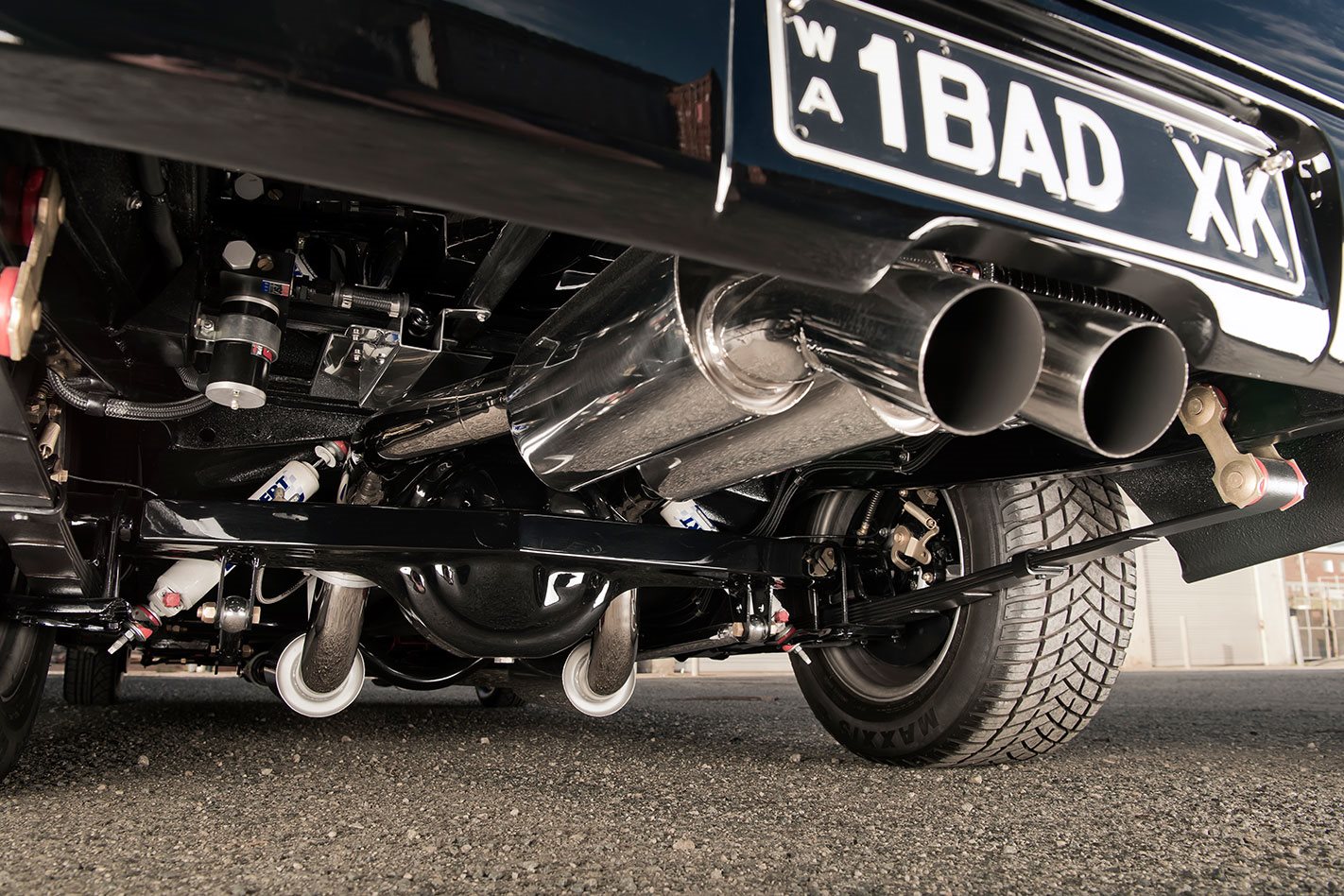 The car is neat as a pin underneath as well. The braced nine-inch has a McDonald Bros two-link and Calvert adjustable shocks to help plant the rear. That beautiful 3in stainless exhaust system by Butler Built Performance Products includes a set of 17/8in headers and the mufflers

“John told me what happens when they build crate engines: ‘They’ve got a 44-gallon drum full of rods and you don’t know what you’ll get.’” As it turned out, the engine did have odd rods in it, so that’s when John decided to put in H-beam rods and go over the whole thing.

“All we kept from the original motor was the block and crank! We put in new rods, pistons, cylinder heads; the whole lot.” 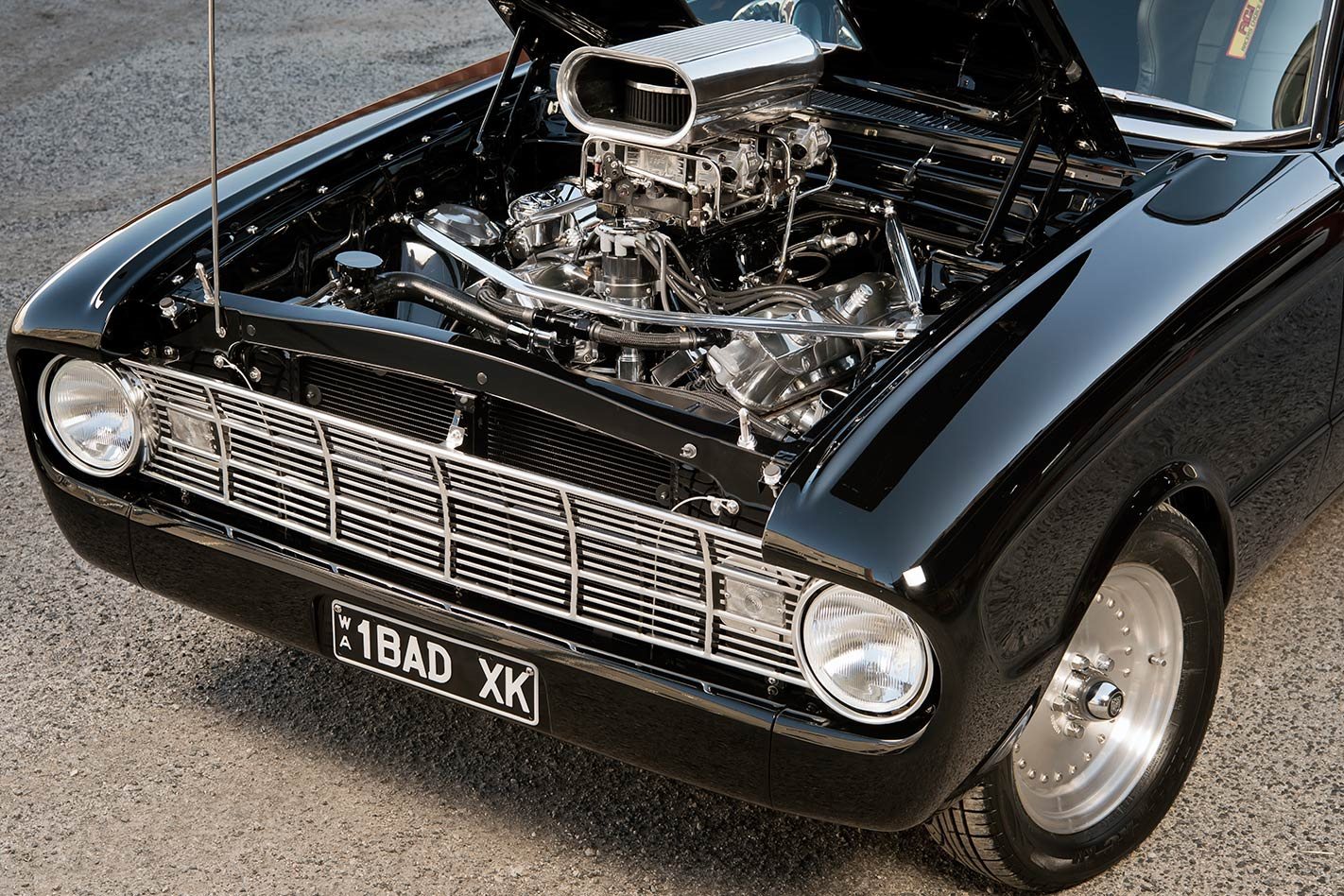 Here’s something you don’t see too often these days – a rolled pan. Craig Douglas Auto Bodies made the front and rear rolled pans from scratch to add a neat 60s custom touch, including frenched number plates front and rear

John Hollings went to town on the Weiand tunnel-ram, port-matching it to the World Windsor Sr heads and giving them a bit of a tickle-up as well to make sure everything was as good as it could be. With the notched-out shock towers, there was plenty of room for a decent set of pipes, so the car was sent down to the best in the business, Butler Built Performance Products, for a 17/8-inch set of headers and twin three-inch stainless exhaust.

Hollings also sorted out the rest of the drivetrain: a fully manualised C4 with a 3000rpm stall and a braced nine-inch that features a McDonald Bros two-link set-up with Calvert adjustable shocks. John admits he still has a few traction issues, but once it hooks up, it plants those tyres and goes arrow-straight. 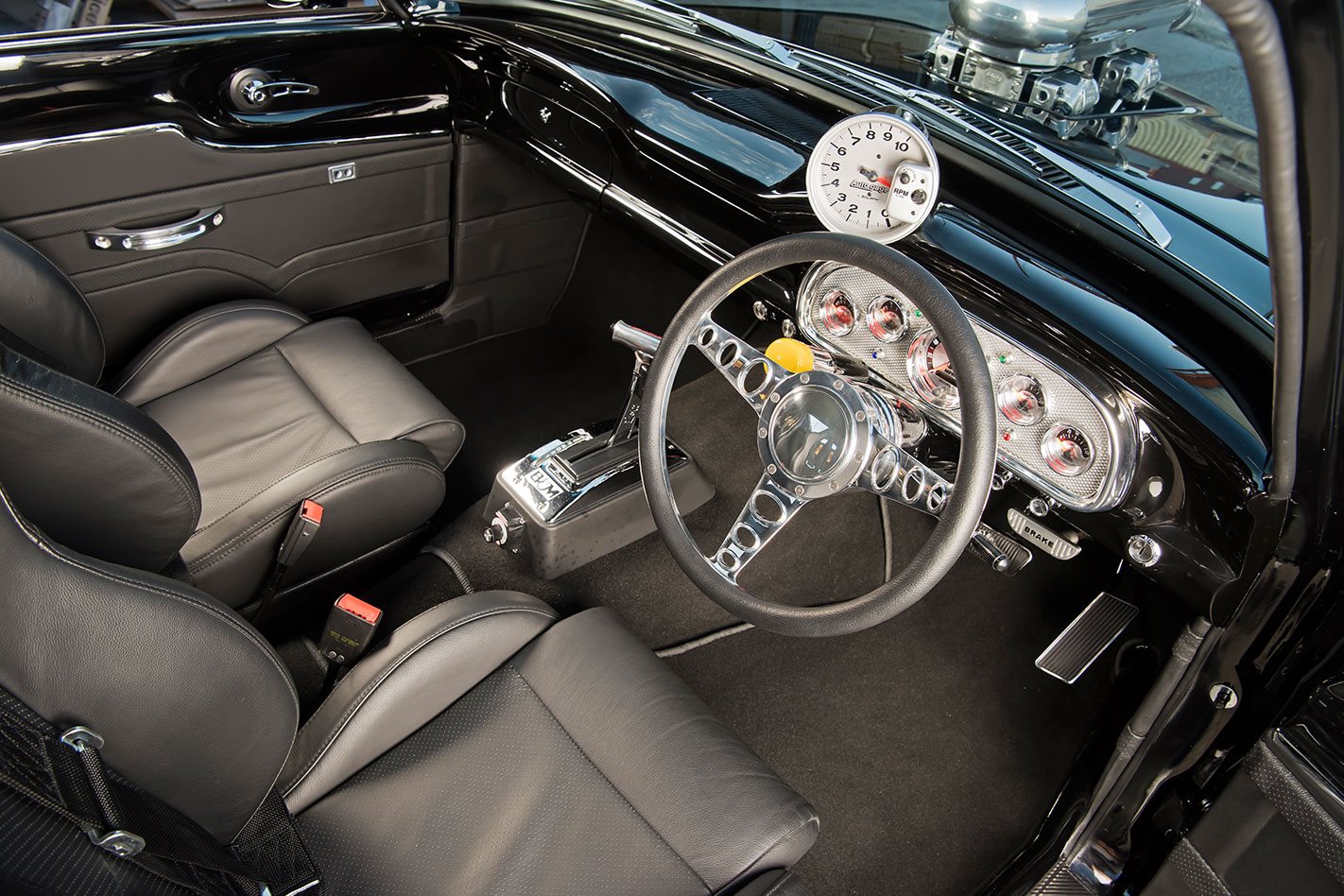 The interior is modernised but still keeps the 60s vibe by utilising the stock instrument binnacle filled with Auto Meter American Muscle gauges. While he hasn’t been down the track yet, John has put everything in place, including a rollcage, four-point harnesses and a two-step

The interior of the car keeps with the overall theme: race-ready, but with a bit of style. There’s a rollcage and a set of harnesses as well as a monster tacho that’s been moulded into the dash using a piece of four-inch tube. Contrasting with the race theme, though still remaining in tune with it, is the stock dash filled with Auto Meter American Muscle gauges, a classy Billet Specialties wheel, electric windows and Mercedes leather and carpet. There’s no a/c, but there is a fire extinguisher under the dash in case things get really, really hot.

Although he’s getting close to retirement age, it’s pretty clear that John is still young at heart, with an enduring sense of what’s cool. The burning question is: Is this XK now too nice to drive? 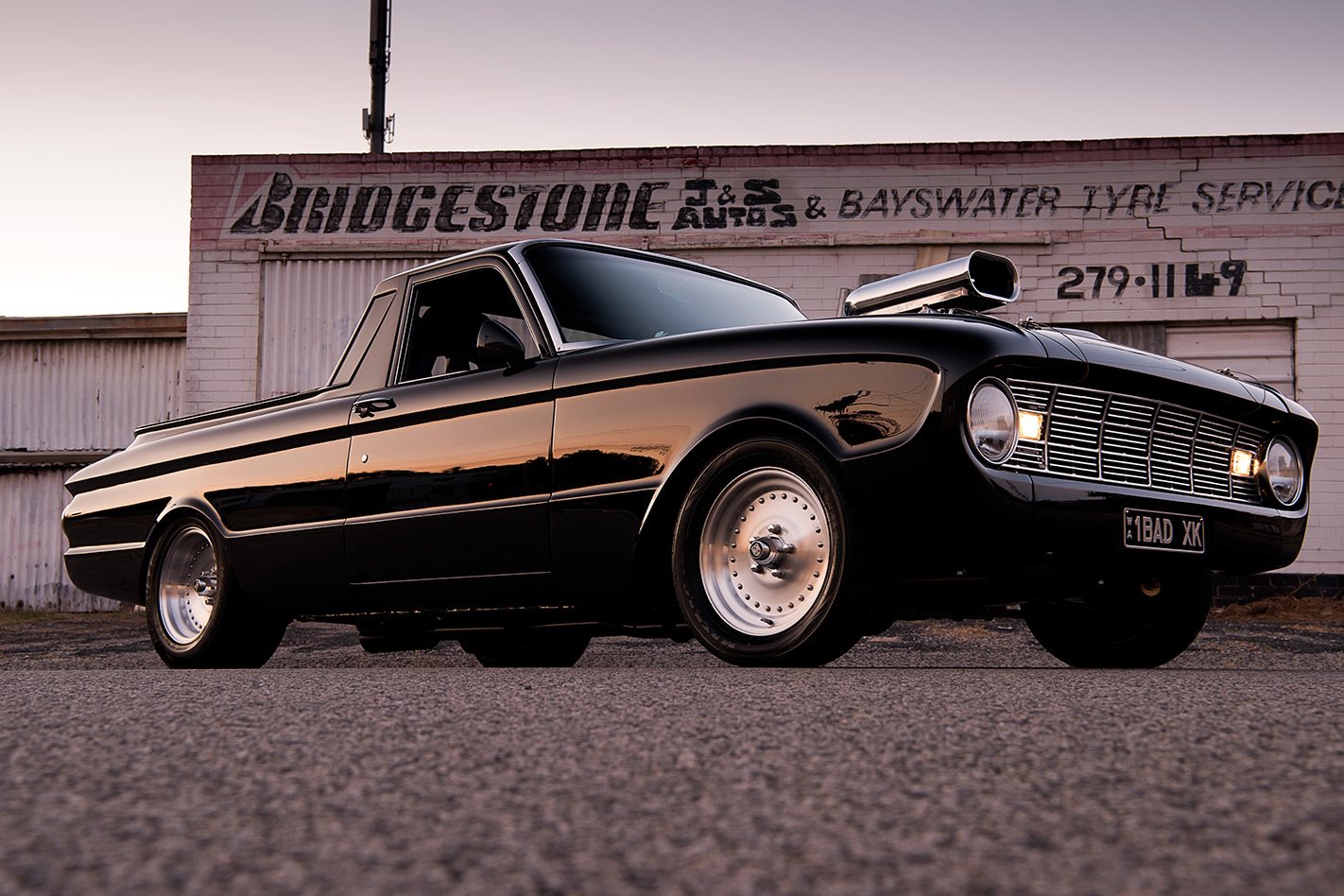