Mike Blackmore’s Boss-powered Ford XM Futura coupe hit 5.4 on the Richter scale before the engine was even installed

Most builds come with some tale of adversity. Whether it’s finding ridiculous deposits of previously undiscovered bog, expensive aftermarket components not fitting, or a pen-pusher at the rego office making life hard, there’s generally something. But few can claim an earthquake as their prime malady. Mike Blackmore can; his Ford XM Futura coupe build fell foul of one of the Shaky Isles’ frequent bouts of seismic activity.

“I had the Boss 290 engine sitting on some wooden blocks about 1.5m away from the car,” he says. “It was 23 December, the last day of work before Christmas, and I’d just picked the car up from the paint shop.” Suddenly, the festive wind-down was interrupted by a violent rumble. 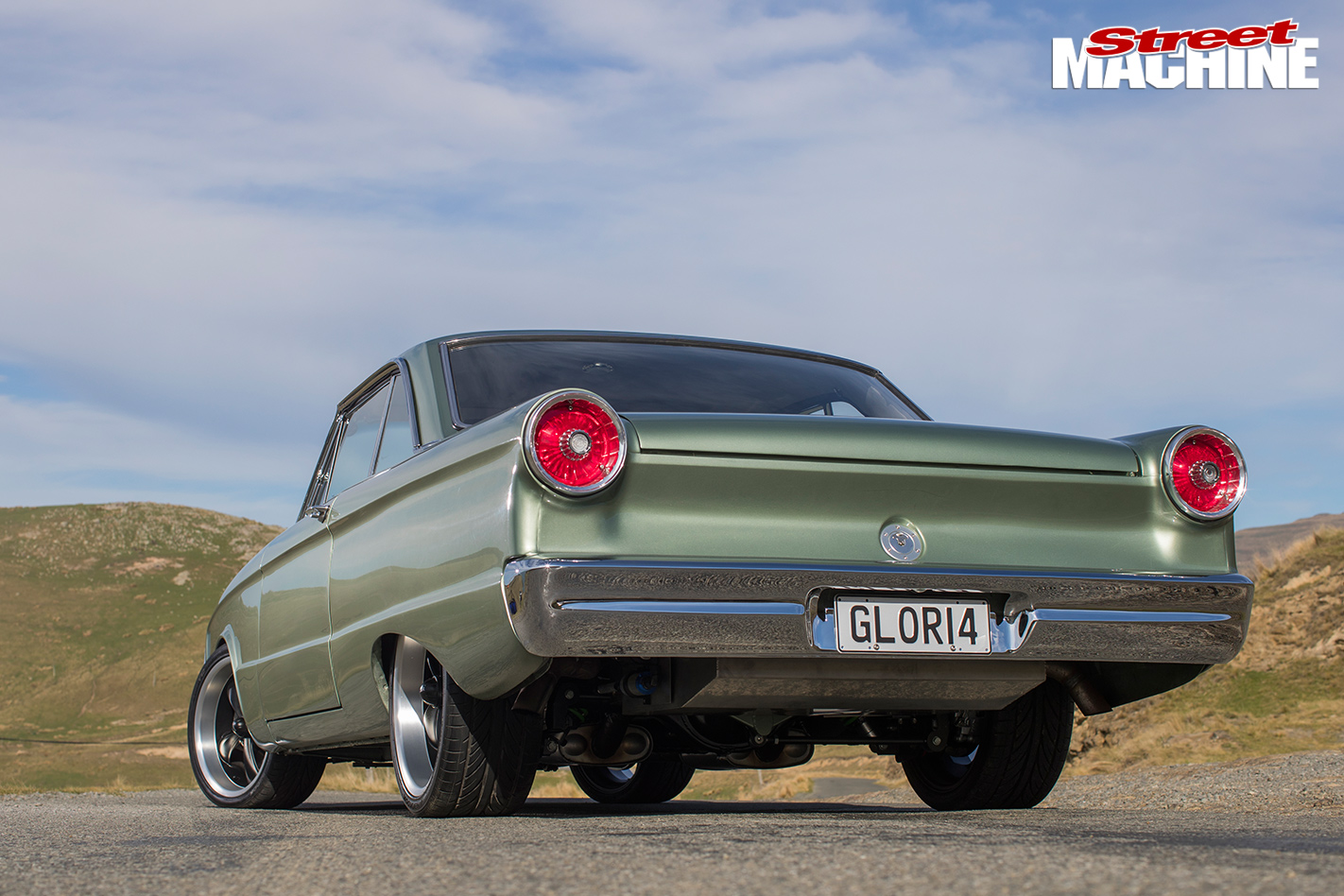 Mike explains the GLORI4 number plates thusly: “I met my wife on St Patrick’s Day, Van Morrison is Irish, his song Gloria is from 1964, the car is from 1964, and it’s painted green – it all adds up!”

Being a Christchurchian, Mike’s experienced his share of earthquakes, and he even had the foresight to position the car and the engine far enough apart that it wouldn’t be an issue – or so he thought. But when they both started shuffling around the garage like errant washing machines, “the coupe ended up with a dirty great engine dent in the rear quarter.”

Although the car wasn’t insured, the workshop that had painted it, Avon City Ford, chipped in to sort Mike out. His home insurance company wasn’t so helpful. “Our house had a fair bit of damage,” he says. “They wrote it off, but it took four years to sort out. In the meantime, we re-mortgaged and bought a place that had already been repaired.”

Such bullshit is always going to waylay an awesome build, but Mike’s a Ford guy and the XM Futura coupe was just too cool to give up on. “My pop was always into Chevs, so when I brought home my first car, a Ford Escort Sport, it must have been subliminal rebellion,” he laughs. 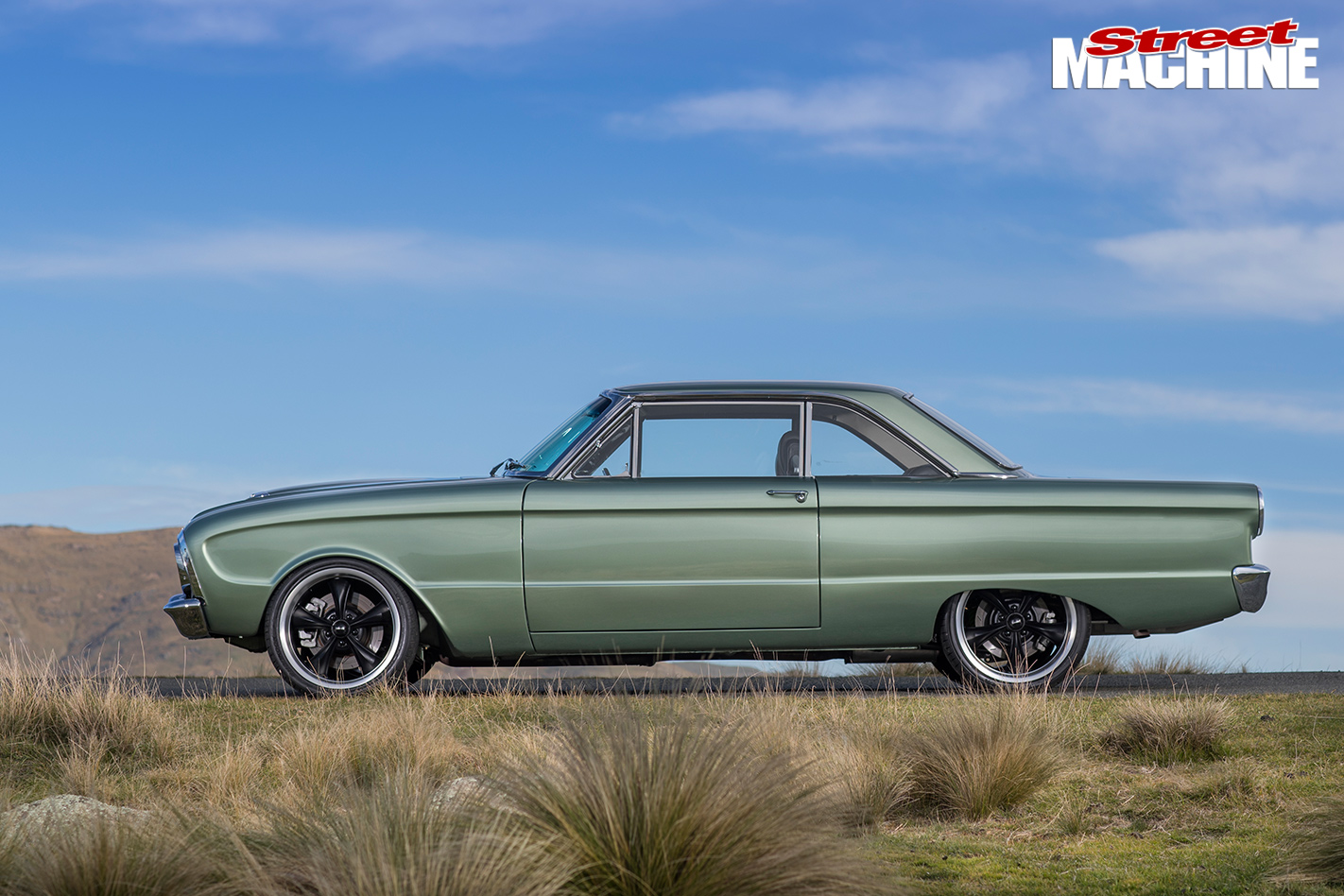 “I knew I wanted green, but couldn’t put a finger on the shade,” Mike says of the car’s striking paint. “The guys showed me tons of samples, and finally, I landed on it.” A few months later, Mike discovered why he’d been partial to that particular hue. “I’ve got this 1950s fridge – a Kelvinator ‘Leonard’ – and it’s got this gold-framed badge with [the same] green in the centre. It took my wife to point it out”

Not that the Futura was a good thing to begin with. “It was a parts car for some guy’s ’63 convertible resto – a rolling body with glass and doors, that’s about it. Other than that, it was a rusty shitbox,” Mike laughs. “But the price was right.”

Sourcing the car from Queensland created its own problems; it took nine months after purchase for Mike to receive it, thanks to freight issues. But his careful planning and self-admitted OCD meant he’d already lined up a body guy before he’d even sourced a project.

“I met Mark Stead from Big Shed Customs at the McLeans Island Swap Meet years ago,” Mike explains. “He’d just finished a miniature-scale ’32; we got chatting and I liked the way he rolled. Steadie’s a bit of a master fabricator and he’s got a lot of good ideas.” 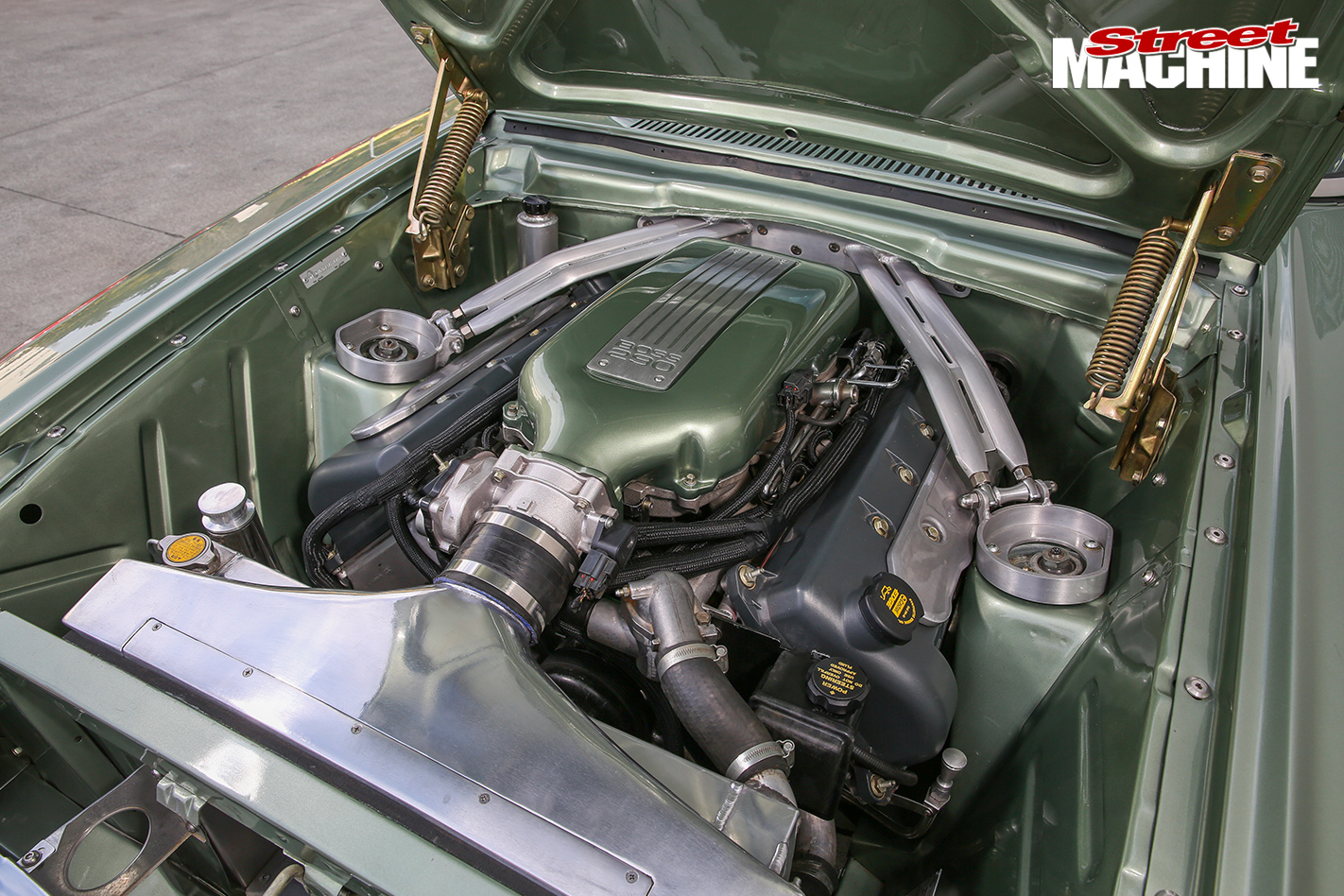 The Boss 290 fits in there nice and snug, with very little clearance between the rocker covers and shock towers. Mike didn’t listen to the doubters, though: “People were saying that I’d never get this stuff to fit, let alone work in this car.” Well, the engine fits and Mike sourced a piggyback ECU module from a crowd in Australia to ensure it plays nice in its new surroundings

Aside from fixing the rust and fitting mini-tubs, Mark suggested re-profiling the rear wheelarches to draw away some of the XM’s slabbiness down those long flanks, especially running minimal trim.

Meanwhile, Mike spent the next three years gathering the bits needed to make it a full car again. A 13-month stint in Perth helped rather than hindered; not knowing many people there and not going out spending a lot of dough meant Mike hit eBay like a madman. “Badges, tail-lights – anything I saw, I got sent to Perth,” he says. “I cleaned it up, packed it up and it all came back to NZ with me.”

Initial plans were for a good, solid tidy-up and a stroker Windsor with a blower, but like all good builds – all together now – Things Got Out Of Hand. “I was bored, sitting in a hotel room and I came across the measurements for a Ford Boss motor.” Enticed by the reliability of a late-model donk, no carbs and a sweet injection system, Mike promptly canned the Windsor and the Boss was on the cards instead. 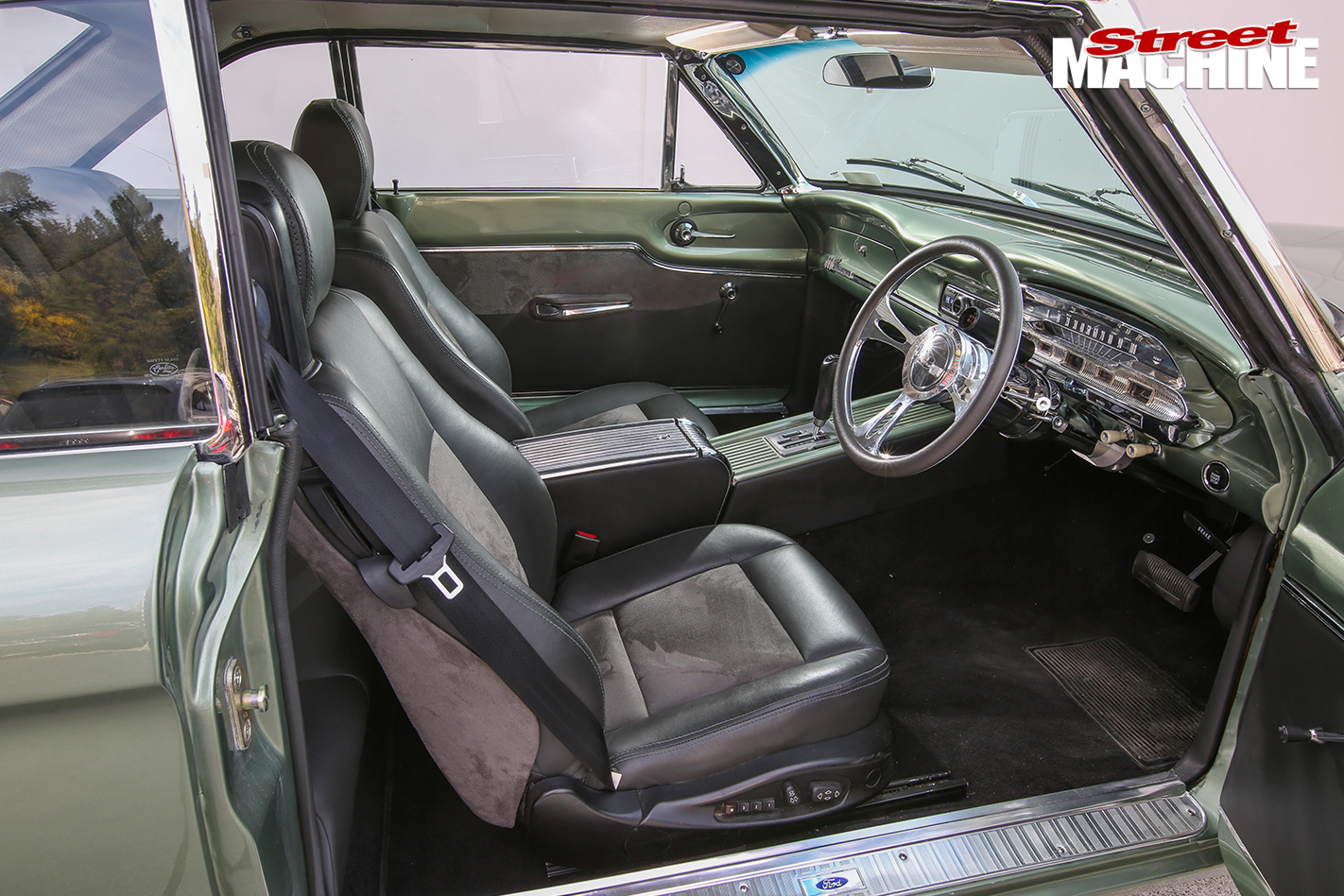 Wrecked E36 BMW convertibles with useable seats aren’t thick on the ground in NZ, so Mike had to buy a pair from the UK and have them shipped over. Trimming was done by Glenn Burke, who used dark grey leather with contrasting light grey suede

“I always knew I wanted something different and wanted it to handle like my Escort race car,” he says. “So I went crazy with the RRS catalogue and pretty much bought everything in it: MacPherson strut upgrade, tubular three-link, disc brakes, under-dash booster kit and one of their first Boss-to-early Falcon conversion kits.” Even with the kit though, fitting the Boss was a massive frig-around.

“I had that engine in and out around five or six times,” Mike says. It’s such a tight fit, you can barely get a pinkie between the shock tower and the Boss’s big fat DOHC heads. Extractors were an issue too, and although they’re basically invisible now, we can assure you they’re a work of art – HPC-coated and tighter than a duck’s arse thanks to Spec Performance. 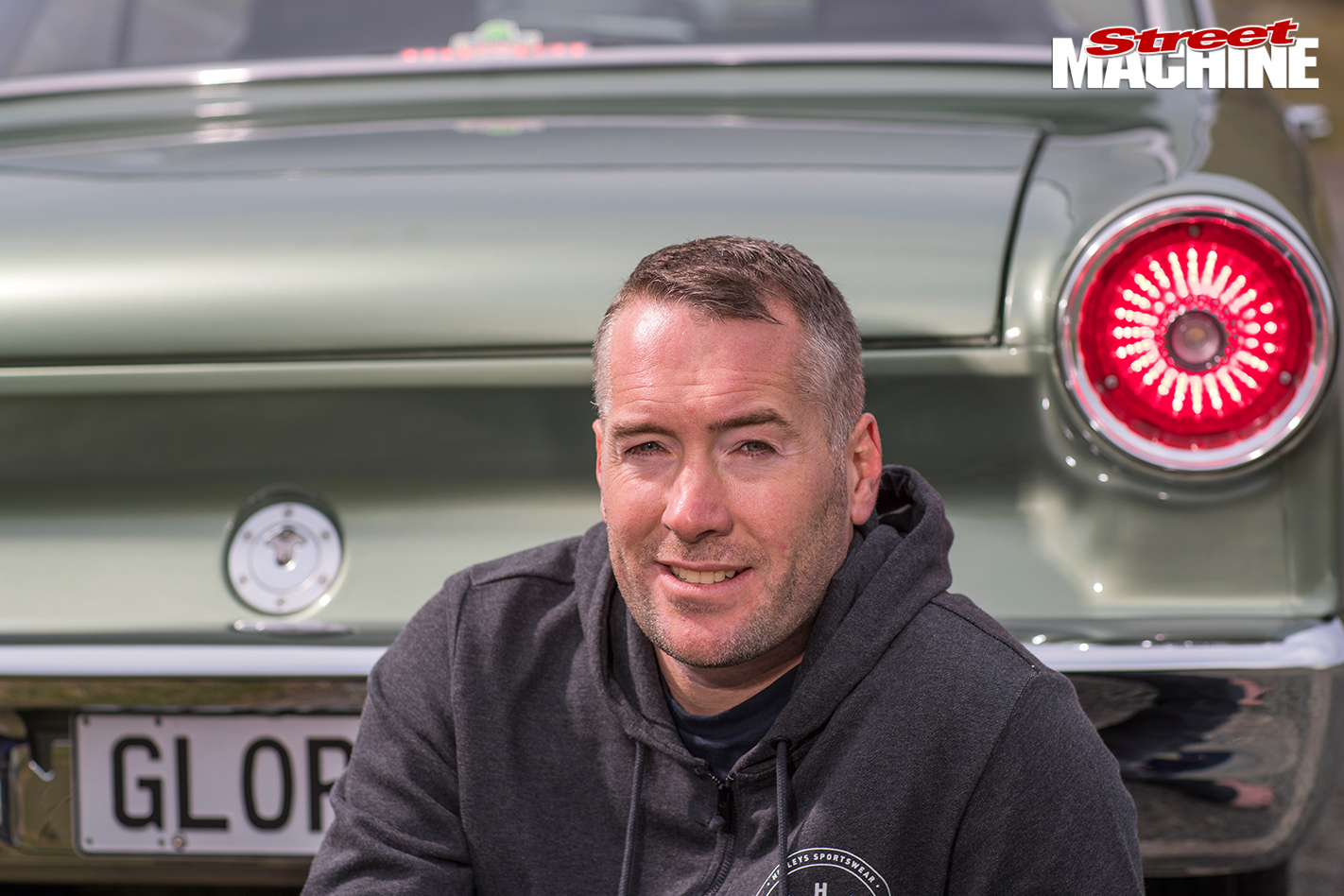 But the NZ Transport Agency’s big beef wasn’t with clearance, it was with the RRS brake kit. “I had to modify this, modify that, even provide RRS’s load drawings for the pedal,” Mike says. Of course, this all took months to play out. “It was a pain. But RRS were absolutely fantastic in supplying information and helping out.”

Going from a bare, rusty shell to a running car packing late-model EFI punch is a big task in anyone’s book, but Mike’s OCD paid off, as did his ability to surround himself with like-minded mates.

Richi Cleland helped out with much of the mechanical side, while brother-in-law and handy auto sparky Malcolm Langley wired up the whole car from afar. “He doesn’t even live in the same city,” Mike smiles. “He’d come down, I’d have everything ready and anything that didn’t work he’d take back to Whakatane with him and sort out.” 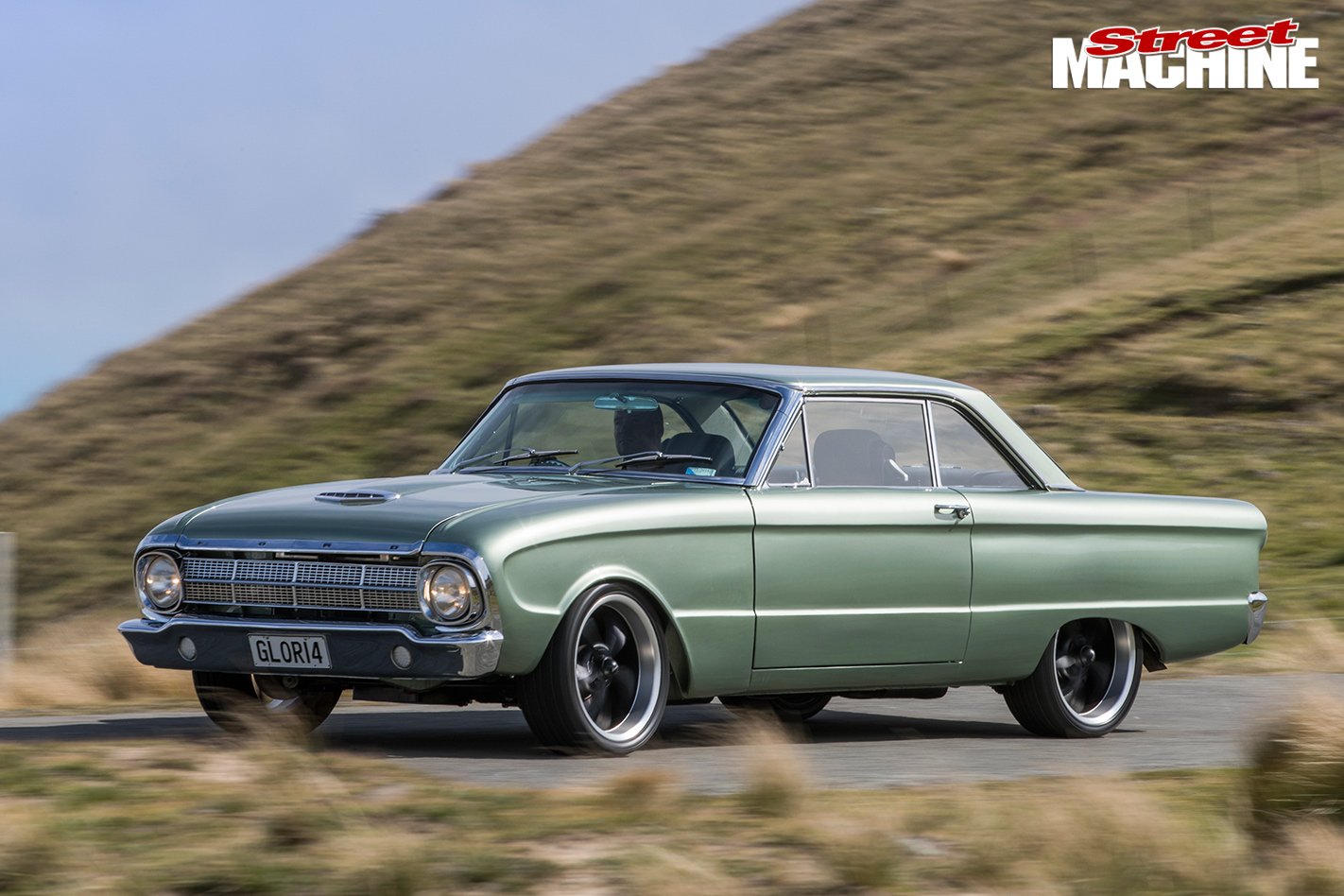 Against all odds, across two nations and in spite of several earthquakes, Mike now has a tidy streeter with late-model reliability, old-school looks and pro touring undertones. She gets driven every couple of weekends, and she isn’t going anywhere.

“Everything I’ve built, I’ve kept,” Mike says. “Even my Escort racer was built from my first car – the one I brought home to annoy my pop!” It looks like this XM Futura, one of Ford’s rarer offerings, is in safe hands – despite Christchurch’s attempts to destroy it.  s 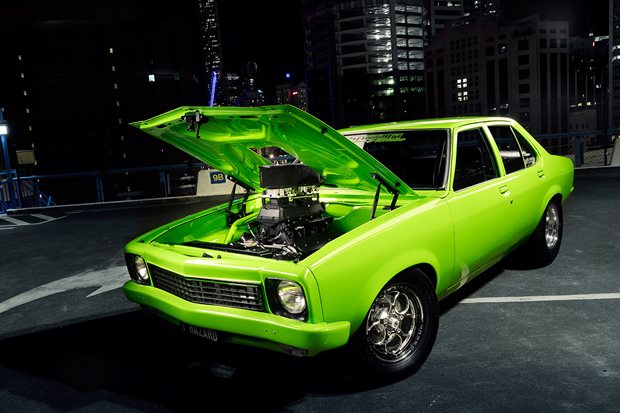 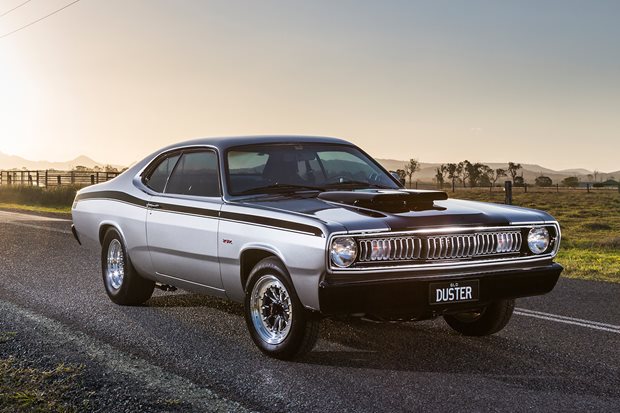 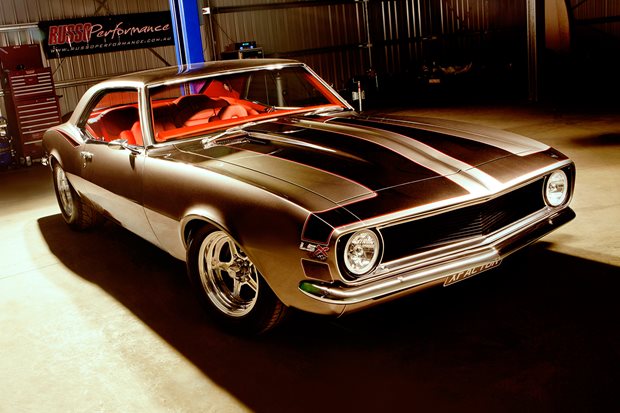