BUILDING a killer street machine can be just like building a new home — a frustrating experience that always takes longer and costs more than you think it should. Just ask Paul Taliana about the crap he had to go through building his aquamarine XT Falcon. What started out as a 12-month rebuild ended up taking more than three years and blew the budget to hell. 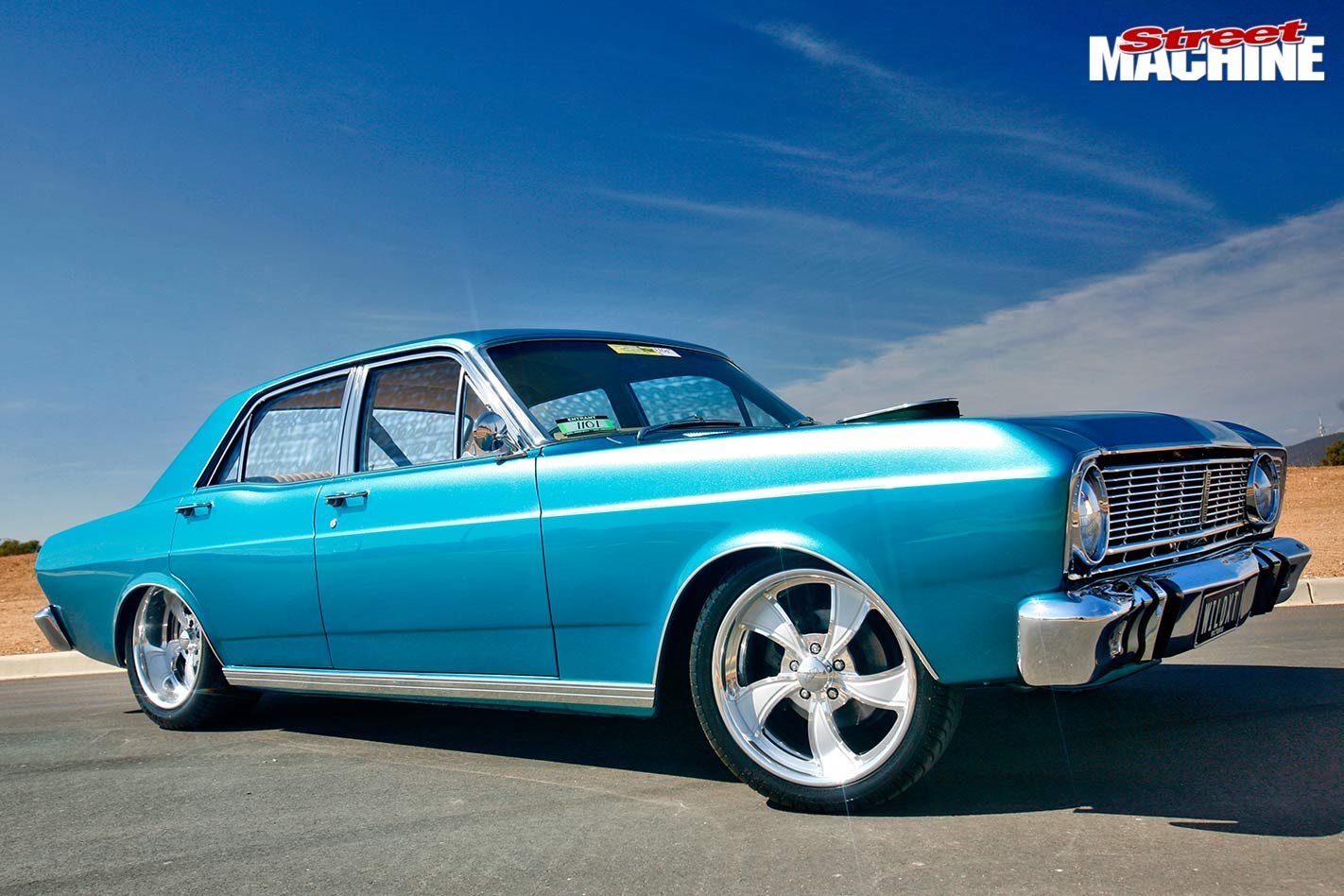 “I didn’t have too much luck with the paint,” he recalls. “I had the car in two panel shops before getting it right the third time.”

Paul bought the XT as a stocker back when he was just 17 years old. In those days it was a whopping 221 cubes of pure dynamite with a column shift auto. Paul got shot of the uncool straight six and sourced a 351 Windsor straight away, squeezing that between the front towers before even getting his licence. Without a whole lot of beer tokens to spend, Paul just gave the 351 a blow-over with a spray can before throwing it in. 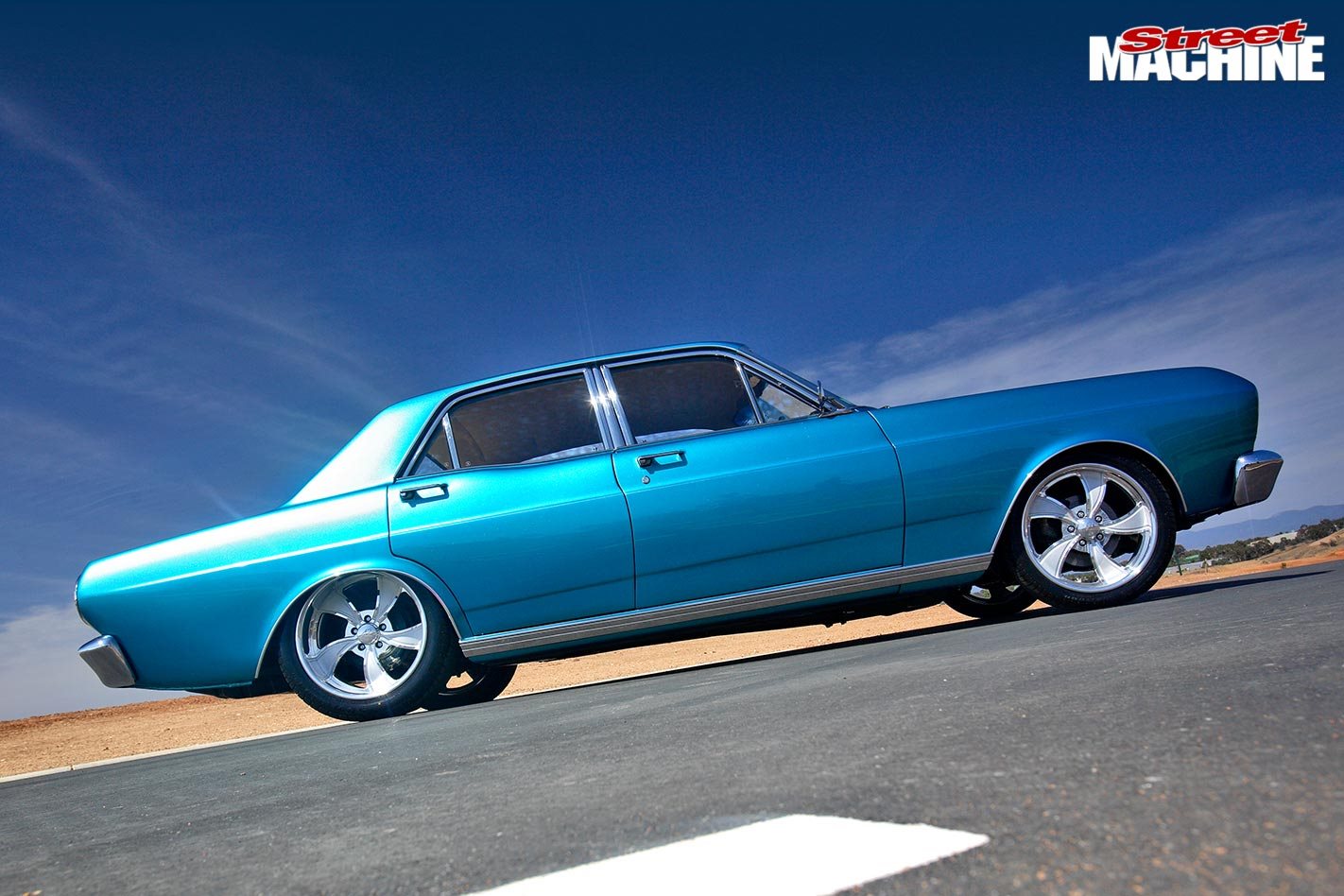 Dart Rousch heads, Victor Jr intake and Mighty Demon carb all add up to 340hp at the bags. An Aussie Desert Cooler radiator and AU Falcon thermo fans keep it all cool

“People used to ask me: ‘Who reconditioned your engine?’ and I’d just say: ‘Dulux, mate,’” Paul remembers with a laugh.

For the next 12 months that was the shape the XT stayed in as it shuttled Paul from A to B and sometimes to C. Then it came time for the major rebuild and the start of the trouble. 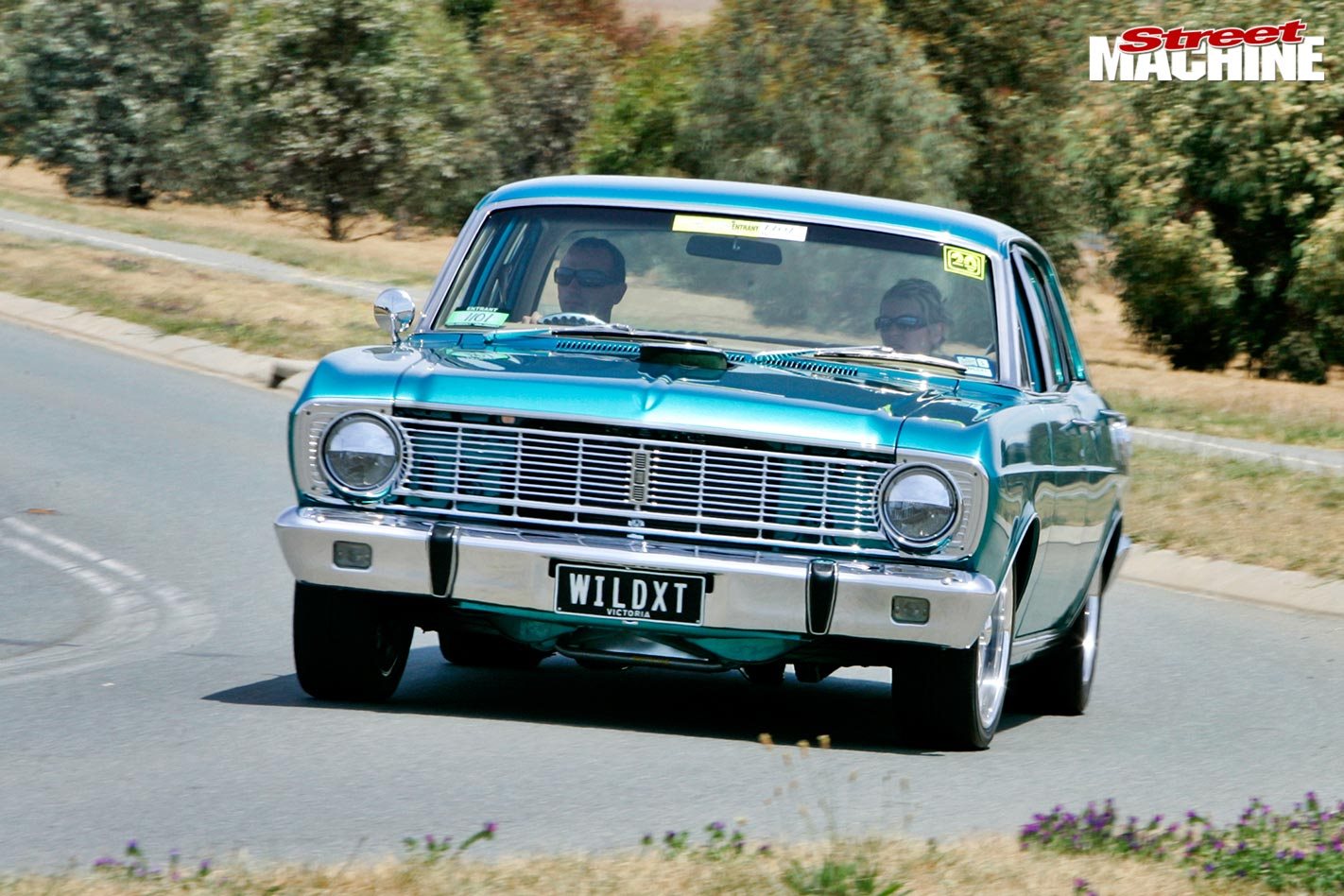 He stripped the XT to a bare shell in his dad’s garage and shipped it off to the first panel shop. The shell itself was pretty good, with just a touch of acne in the left-hand rear quarter. Paul had paid a little over the odds to get a good shell at the outset, which probably saved him from spending more moolah down the track. It’s better to buy a good shell at the start than to try and resurrect a rotting heap.

Trouble was that the XT then sat at the workshop for ages with very little being done. 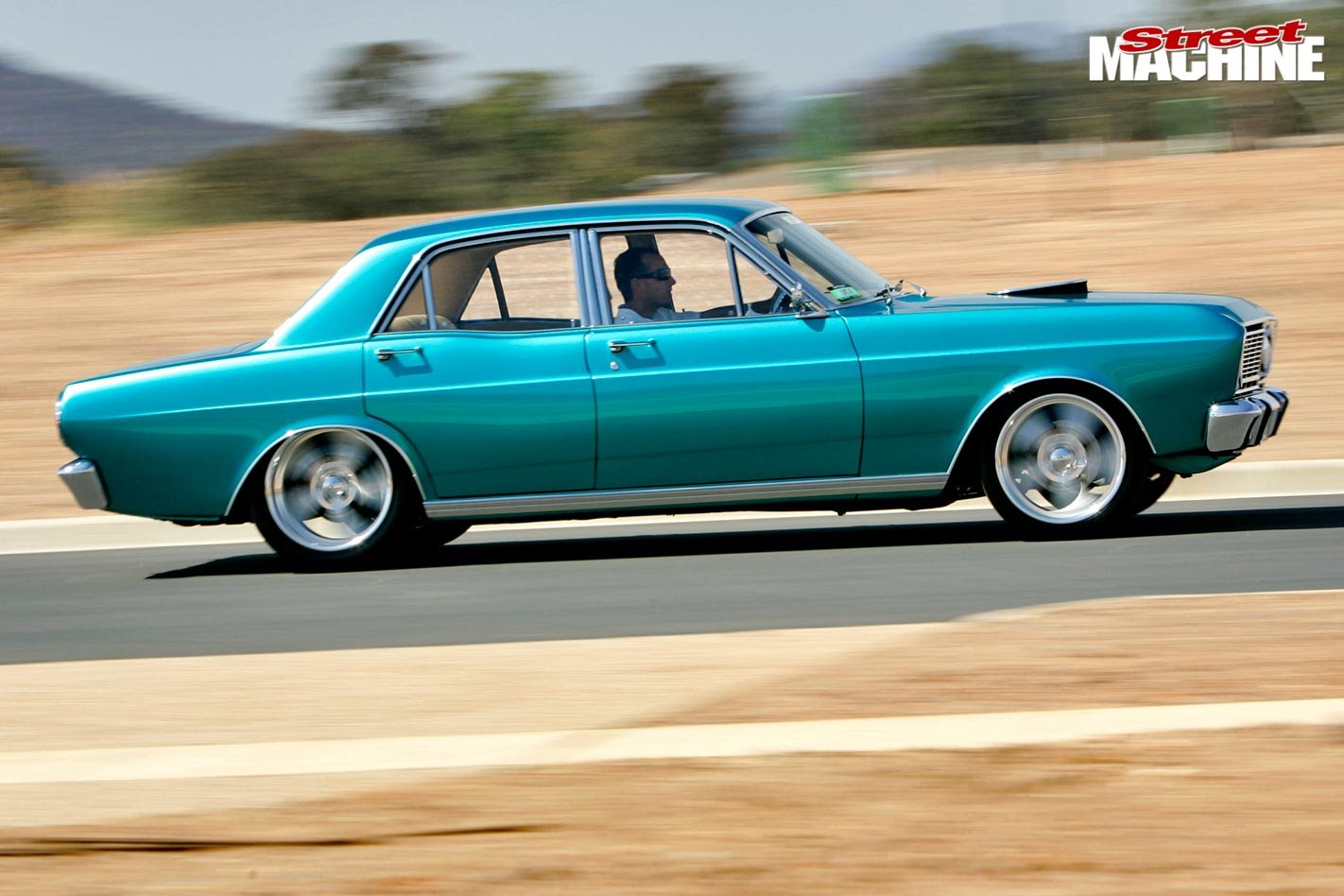 “The first shop had the car for a year and a half with only the engine bay being prepped,” Paul says. While he admits they did a pretty good job of filling the holes and smoothing out the bay, the last straw came when there was a small fire in the shop. When you have a fire that requires the attendance of the guys in the big red buses, they don’t muck around. The fire brigade hosed everything down, including the bare metal XT, so the shell soon needed blasting again.

Paul wanted to take the XT to another workshop where he knew he’d be treated right but they were flat stick at the time and so he found himself yet another shop. As it turns out, that was the wrong move. 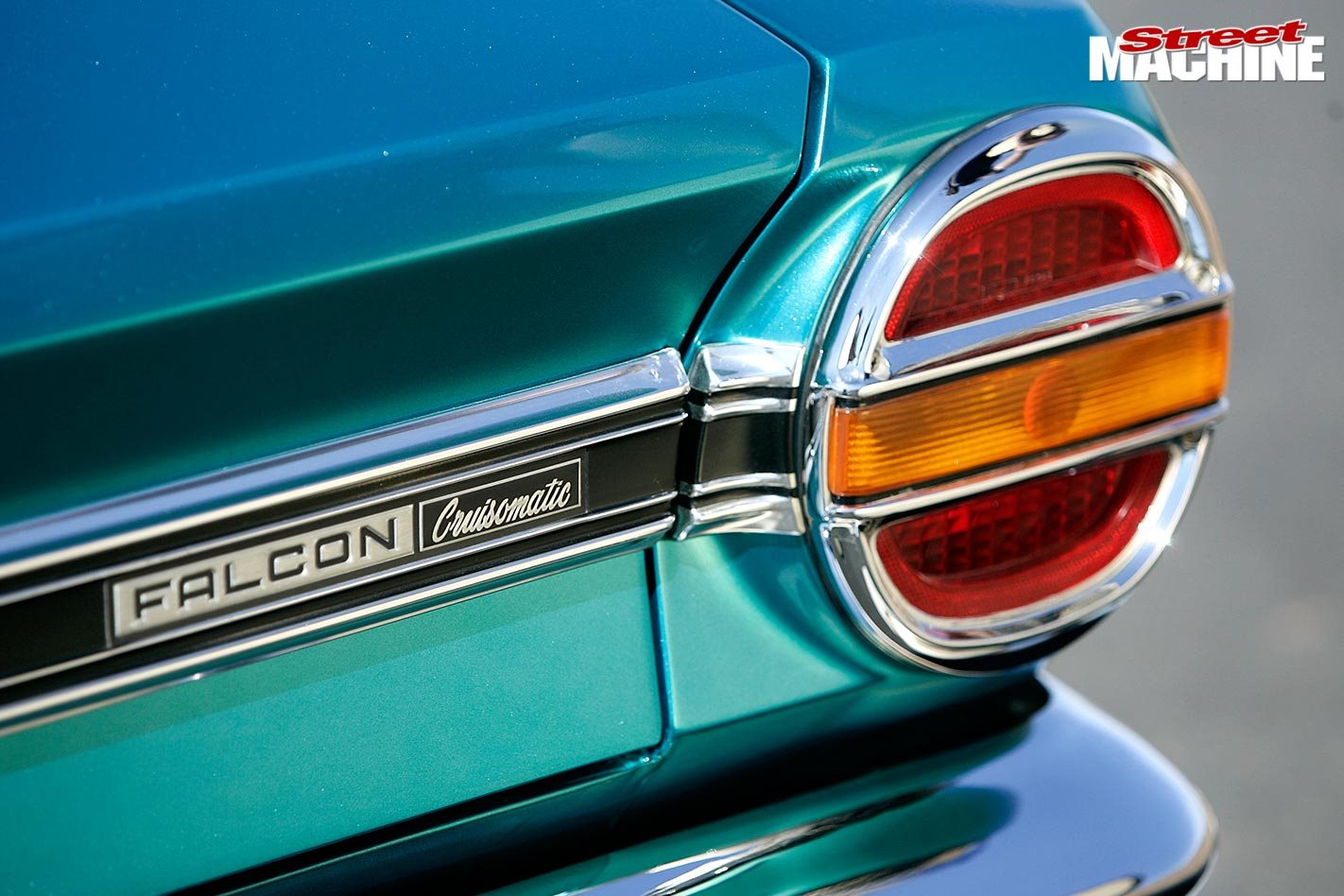 “The body worker there had no clue and I was given the car back in worse condition than it was sent to them originally,” he says.

Even now, it’s not a happy memory as he recalls checking the car just a couple of weeks before it was supposed to be finished.

“The door gaps and panel alignment were just shit. The front door didn’t match the front guards and I pointed that out to them but when I picked up the car they had used bog to level it out — it looked like a ski-jump.”

As you can imagine Paul was pretty dirty at the time but he decided to just finish the car and then get it fixed at a later date. 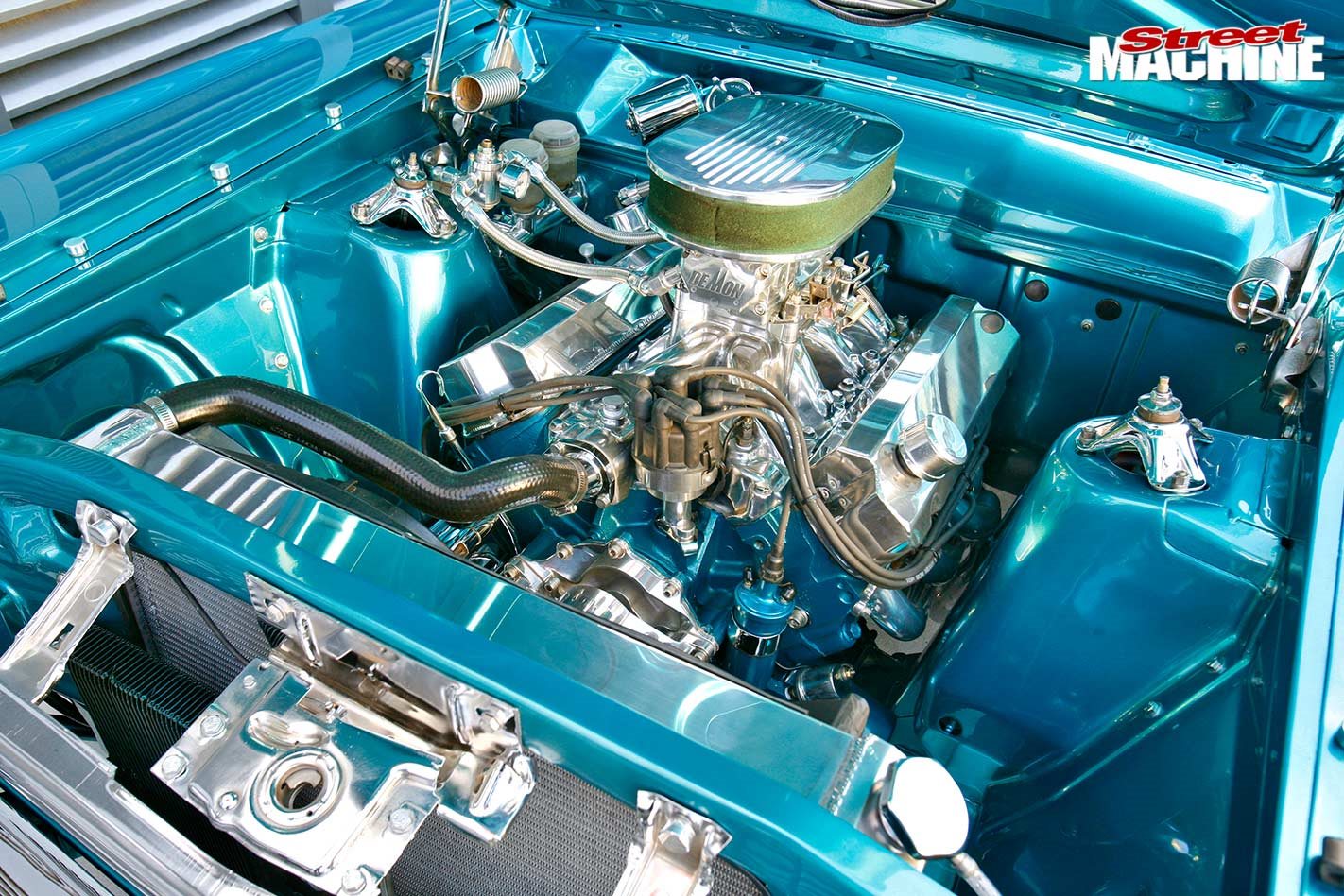 During the panel shop debacles, Paul had Motorcraft prepare the seats so they were all ready to go, and employed the Dashboard Doctor to make up new door trims and recondition the dash pad. Beige vinyl covers the lot and the Fairmont-style seats look much better than the original poverty-pack Falcon pews.

Milad at Milmotive took on the mechanical responsibilities, taking the stock 351-cube Windsor and moulding it into something a little more inspiring.

Although the engine is topped by a lot of jewellery, it’s not just for show. Mind you, the polished Mighty Demon and Victor Jr manifold have helped the XT win its fair share of mantlepiece furniture. Polished sheet-metal rocker covers conceal a pair of Dart Rousch heads, and further down there’s a Crower cam and a set of KB pistons hanging from the stock rods and crank. 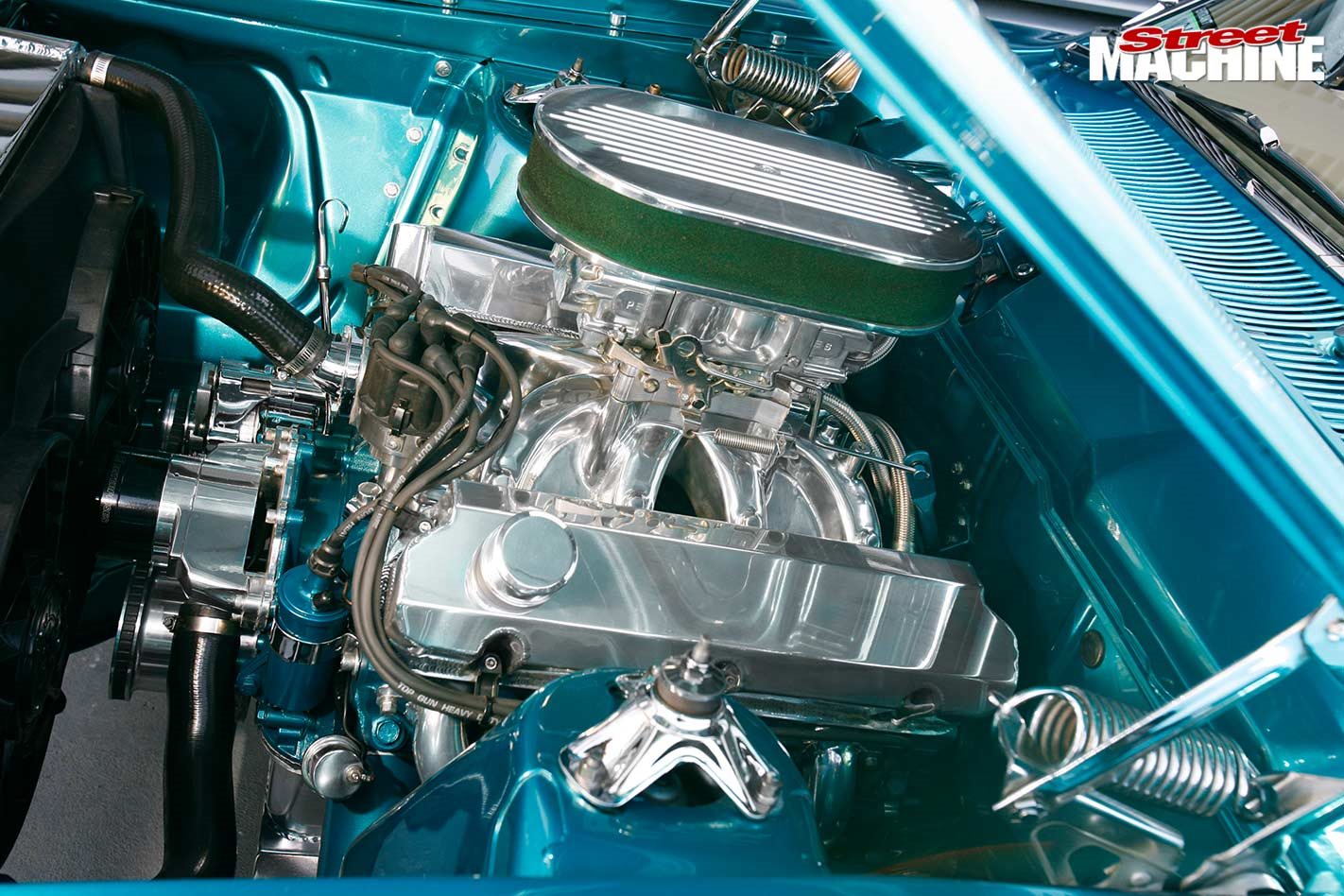 What’s it all good for? Try 340 ponies at the rear tyres. That’s good respectable grunt and more than enough to see the XT into the 12s — if Paul can hook it up.

Initially the XT had some overheating issues from the added grunt but it was simply a case of the cooling system not being up to the task. After working through a pile of other stuff first, Paul eventually bit the bullet and got himself a large Aussie Desert Cooler radiator and a pair of AU thermo fans to solve the problem. Now the XT is a cruising machine, although it doesn’t get as much road-time as it should.

“I’d like to drive it a lot more but it’s hard when you’re self-employed,” Paul reckons. 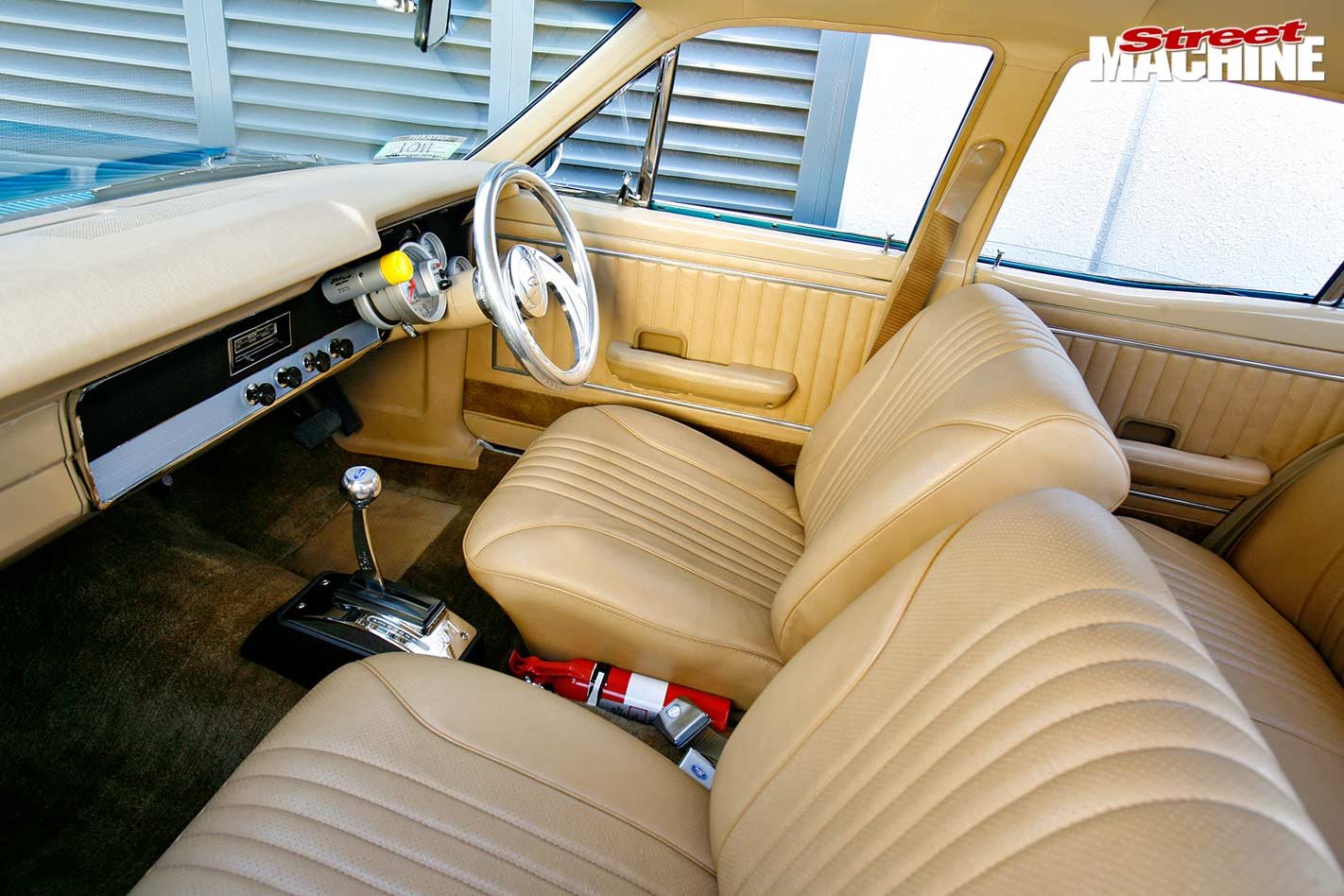 Paul says the Fairmont buckets were hidden under the bed for a couple of years after he had them retrimmed, while the bodywork was sorted out

After getting the XT on the road and mechanically sorted, he decided it was time to get something done about the body. Spiro at Mr Duco had been high on Paul’s original list of preferred panel and paint men but was backed up too far with work to take the XT in the first time around. Luckily not when it came around again.

He took to the car with a speed file and set about fixing the panel alignment before coating the XT in Paul’s choice of Aquamarine.

“Spiro was a great help and isn’t shy of putting in the after-hours time to do the car,” Paul reckons. 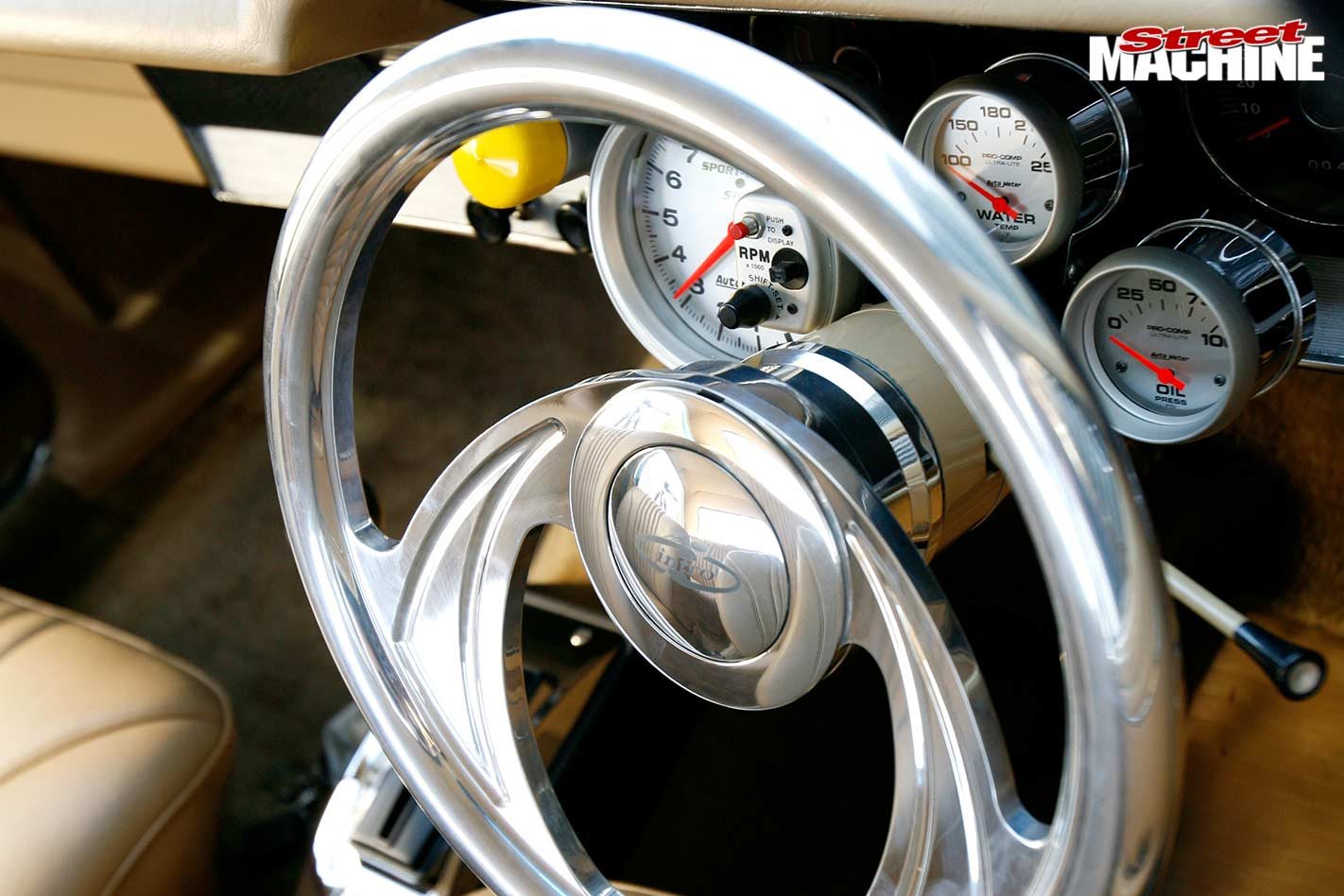 Paul hasn’t fitted a stereo to the Falcon. Next to ‘stereo’ on the tech sheet he wrote: “Exhaust notes”

He’s pretty happy with how it’s all turned out, now the paint is right and he’s got a new set of wheels. Back when the body was getting done the first time, he bought a set of Convo Pros. They’re popular rims these days and look good on just about anything but Paul wanted something different to the masses. Showwheels had just the thing: Intro’s Twisted Vista, and as soon as they tried the 18in models on the XT, Paul knew he had to have them.

The Intros help Paul’s XT get noticed — enough to make it into the Top 60 Hall at Summernats 20 and you can’t argue with that kind of recognition.

“I built it to look good and have a bit of everything,” says Paul. “If I only wanted to go quick I would have just slapped it together.” 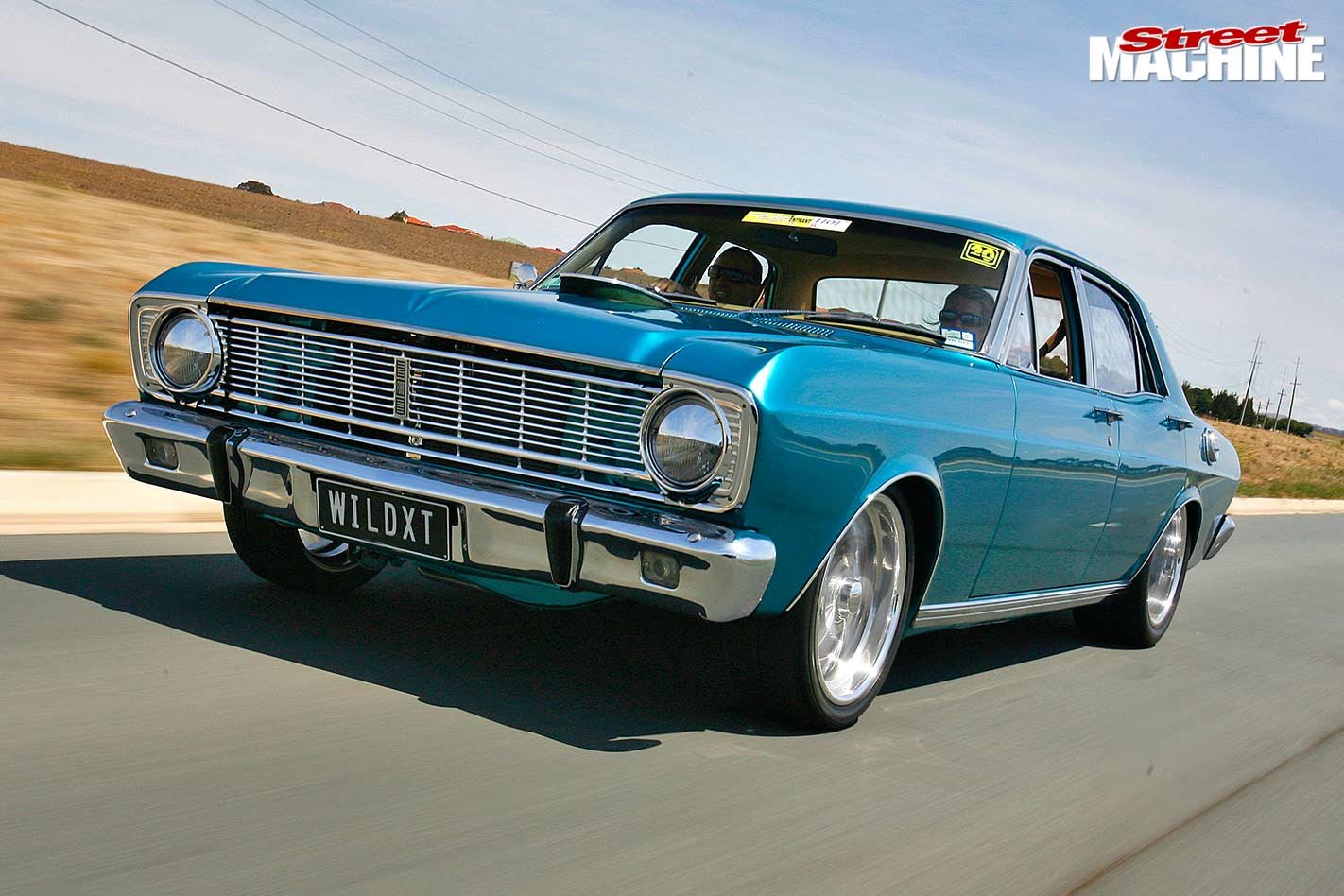 THANKS
Dad for letting me terrorise his garage for a lot longer than expected; my sister Lisa and my girlfriend Rad; Nick Dean; Steve; Mark; Scotty; Rap; Milad; Taverna Brothers; Mick; Chris at Showwheels; Johnny C