Steve Nogas turned a V6 Camaro rental hack into a tyre-shredding 632ci, 16/71 blown tyre trasher with a 175Ohp sting in its tail

ASK any red-blooded bloke if he’s seen the movie Transformers and he’ll probably embark on an in-depth discussion of the merits of Megan Fox and the new generation Camaro hero car, Bumblebee. 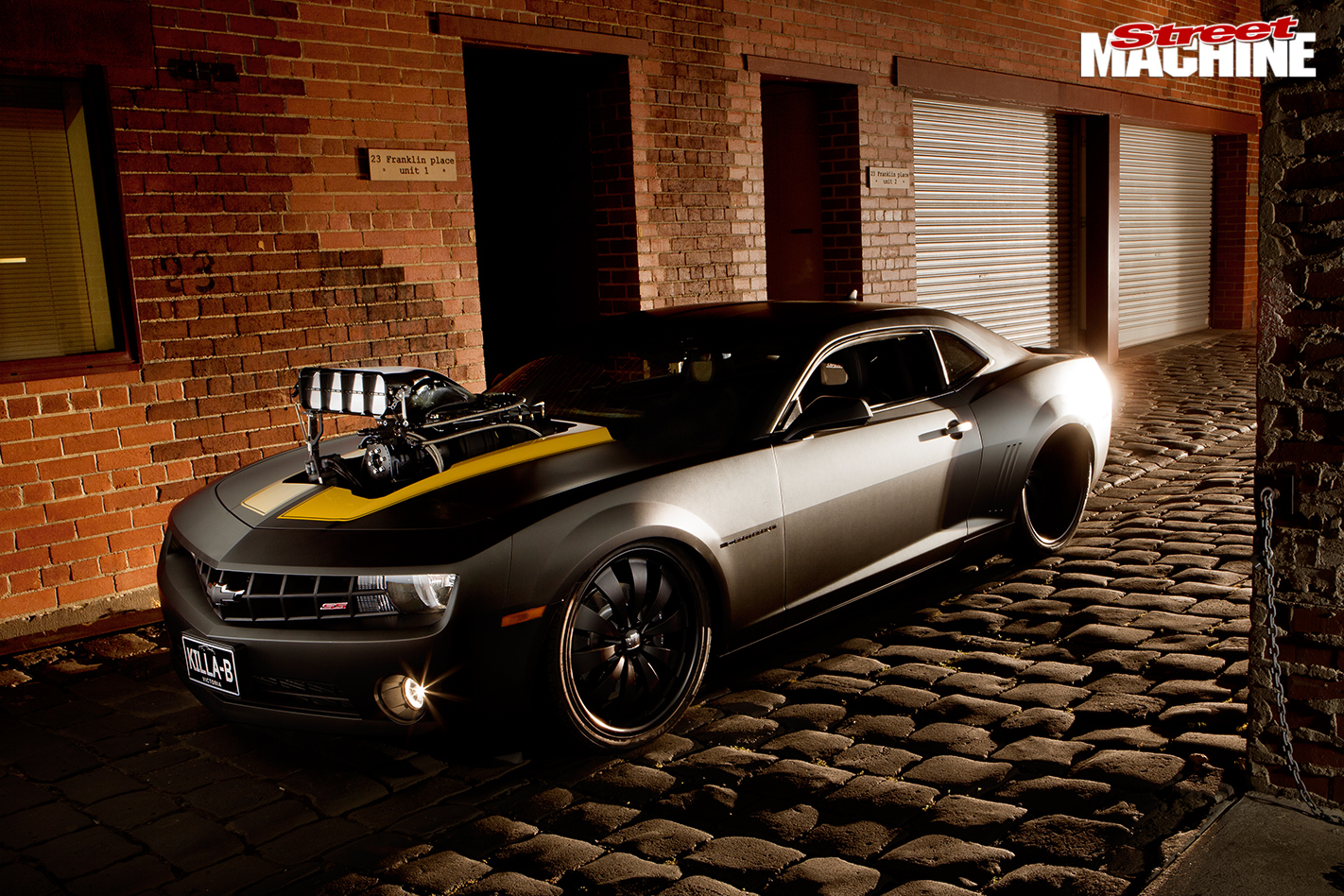 Of particular note is one sensual scene in which Megan’s character, Mikaela Banes, lifts the hood on Bumblebee (before its transformation from 70s rust-bucket to current model) and suggestively arches over its engine bay to investigate a mysterious mechanical gremlin.

While one might question the accuracy of Mikaela’s assessment that the vehicle is fitted with a “high-rise double-pump carburettor” (looks more like cross-ram Webers or maybe fuel injection to me), the whole situation is so overwhelmingly sexy that we honestly couldn’t care less what she calls it. 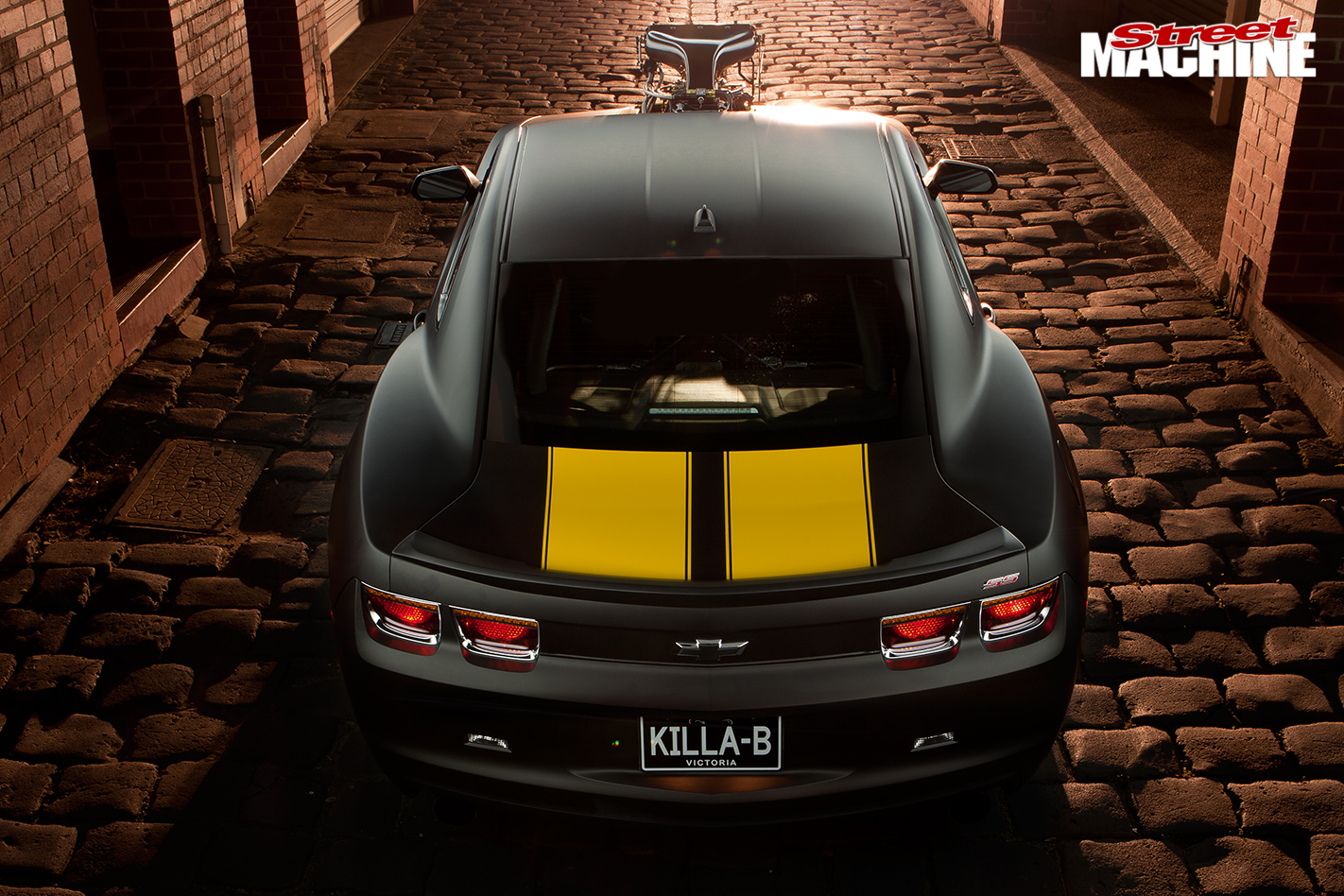 It’s a mission for which the car is well equipped, wielding a 16/71 Littlefield-blown 632ci big-block for a fierce 1750hp knockout punch.

To get there, it boasts a spec sheet that reads like a who’s who of top-shelf aftermarket products, but it’s the car’s imposing visual presence that won it a legion of fans when it was unveiled at MotorEx before it had so much as turned a tyre in anger. 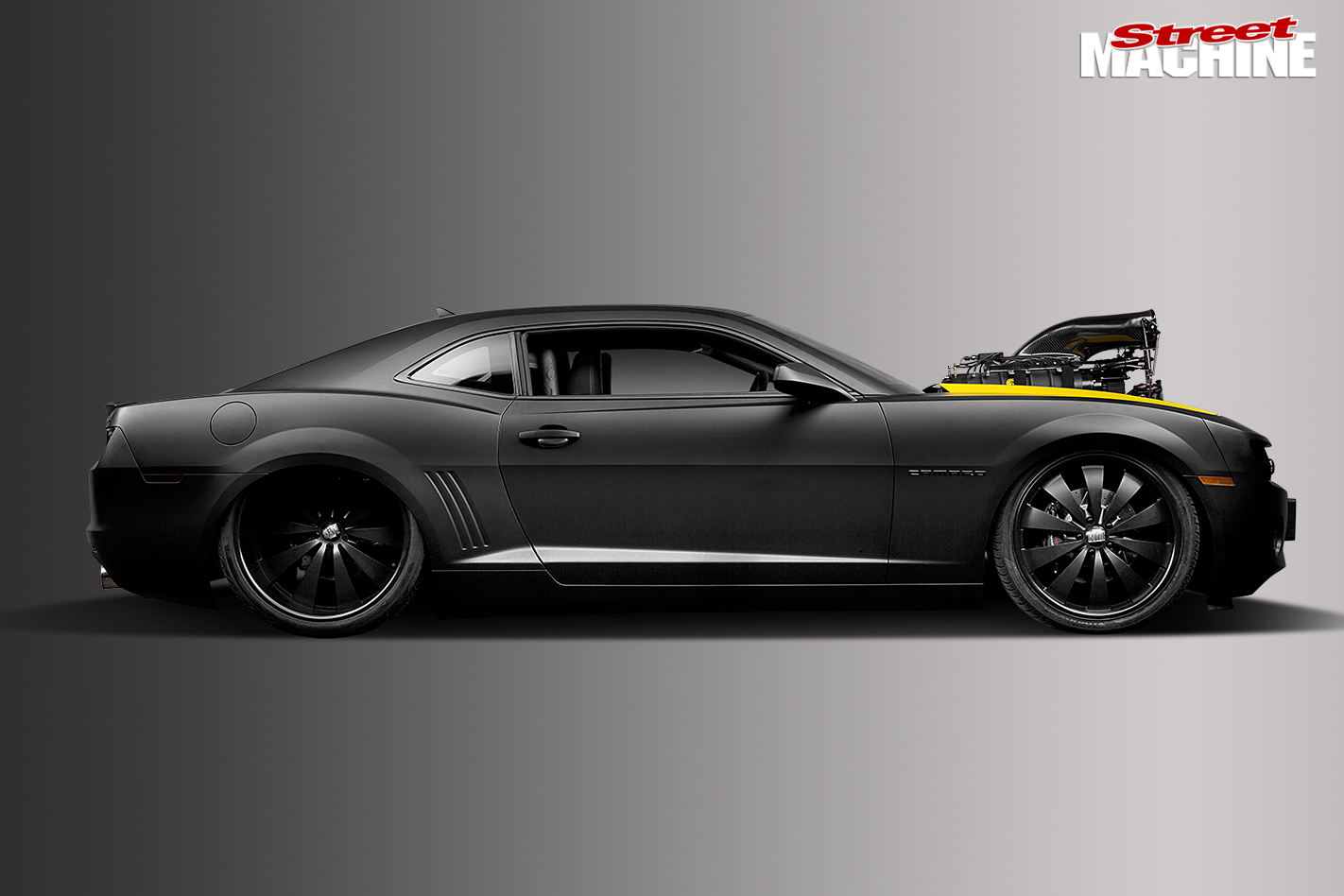 3M 1080 series matt black vinyl wrap is the perfect finish for KILLA-B's supremely tough look, while the gloss yellow stripes are a nod to Bumblebee

“I bought it as an ex-rental in pretty good order from Manheim Auctions in Milwaukee, USA, shipped it over and drove it around for a while on trade plates,” Steve says. “The plan was always to build it up as a burnout car, something different in the scene. I’m a relative newcomer to skids but I wanted to take the car to the next level. There are plenty of cars out there with 20 or 22in wheels, so I went with 24s. There are lots of big-blocks out there with 14/71 blowers, so I went to a 16/71.”

The car owes much of its sinister demeanour to its matt black finish. Rodders may have been doing it since the dawn of time but it’s great to see the look making a showing on a contemporary ride. As Steve tells it, that decision came at the last minute, and was made possible with the use of skilfully applied 3M vinyl wrap. 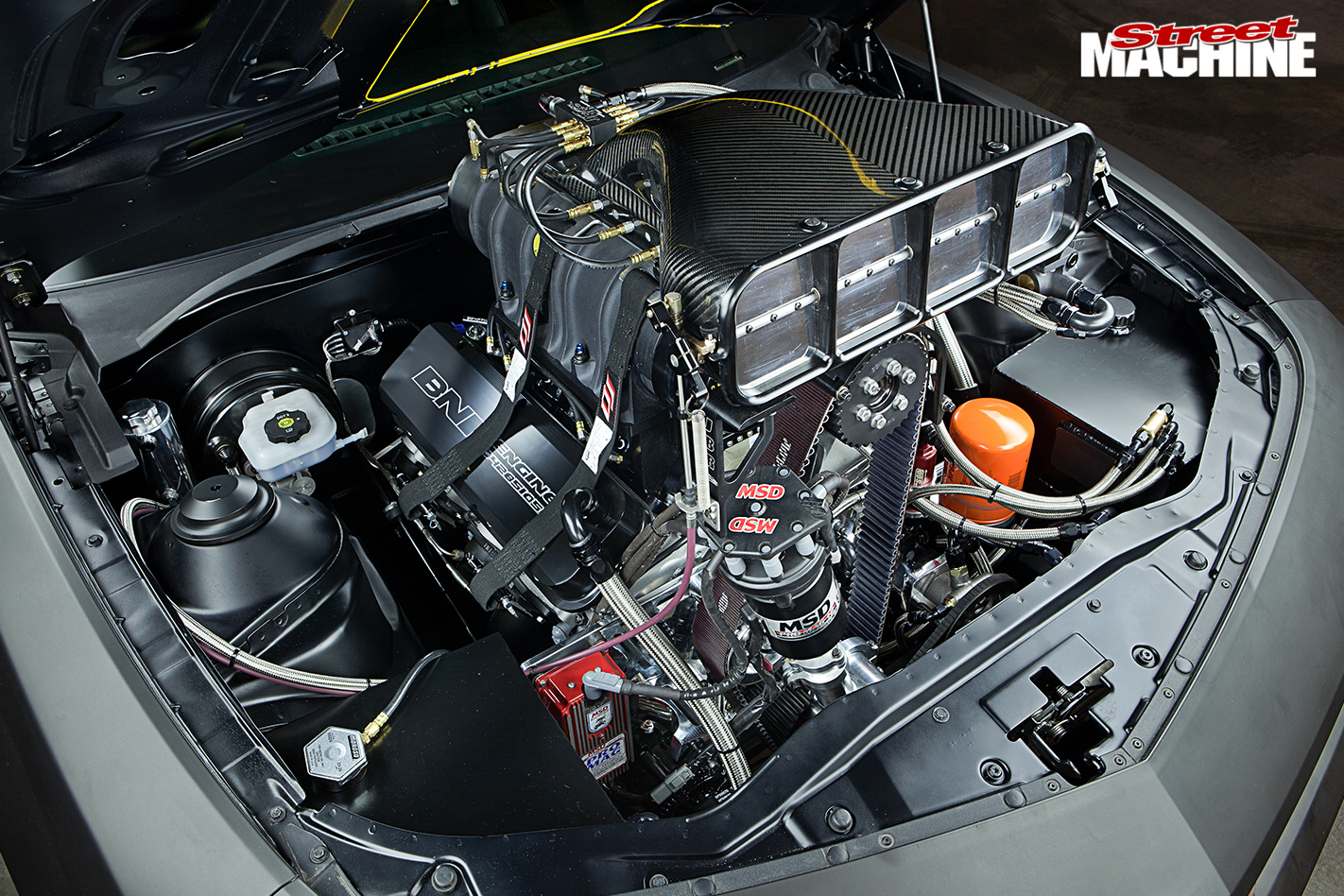 Nothing beats a methanol-swilling blown and injected big-block. The 632-cuber is estimated to be around 1750hp on a soft tune, with more to be had should Steve decide to push the envelope

“Five weeks before MotorEx we decided to change the car from yellow with matt black stripes to matt black with yellow gloss stripes, mostly thanks to Owen Webb from 3M and Matt from Vinyl Wraps and Graphics.

“A lot of people were expecting the car to be yellow, so when we decided to unveil it at MotorEx we had to make it different and keep it all under wraps. Besides, a killer wouldn’t go to murder someone in a bright yellow trench coat!” 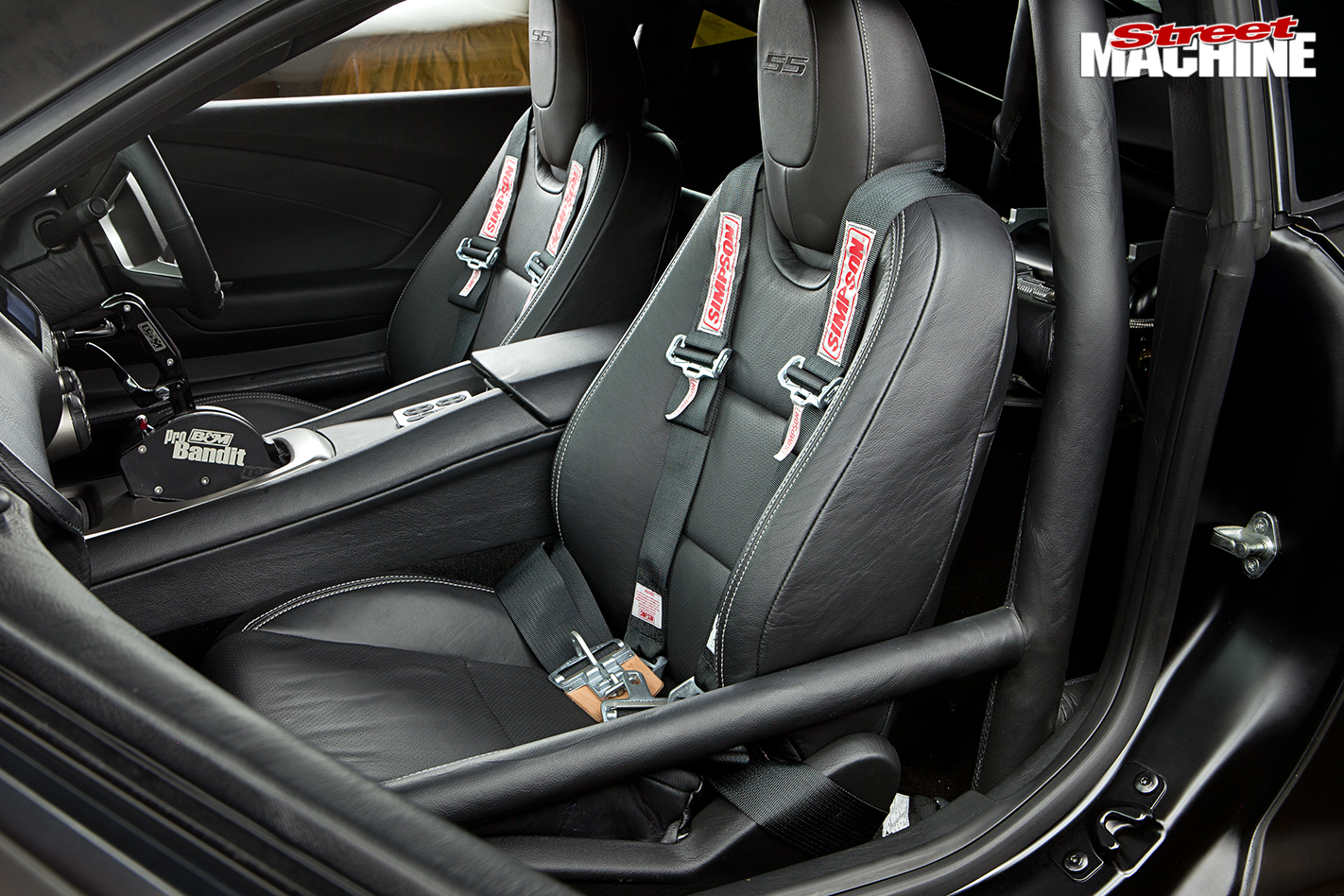 It takes something loud and proud to make an impact in the Aussie skid scene these days, and from its carbon-fibre JBR injection hat to those monster 24x14 Boyd Coddington Spectrum rear billets wearing 405/25/24 Pirelli P Zero hoops, KILLA-B is unashamedly excessive.

Even the front tyres are big, at 265/35/22 offering Steve plenty of front-end grip on the pad whilst being pointed by rack and pinion power steering.

The slammed stance comes courtesy of massive tubs and a four-bar rear end, with AccuAir airbags at all four corners determining ride height at the flick of a switch. 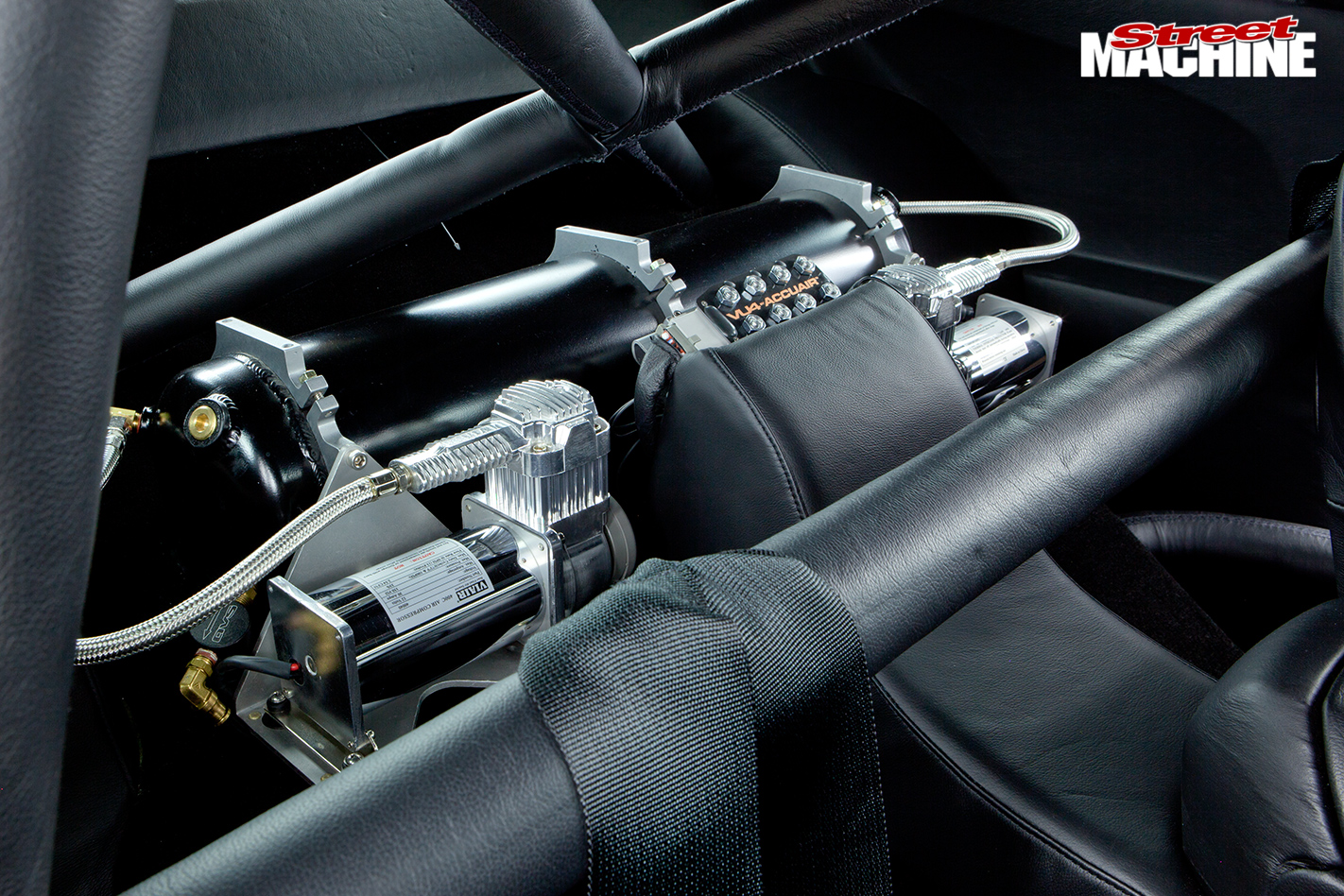 "We'll suck it and see with the airbags," Steve says. "Even though we've used braided line and put in some plates to protect it all, a tyre popping at a wheel speed of 300km/h might be too much for it to take"

The methanol-sucking, dry-sumped 632 wouldn’t look out of place at the pointy end of the Pro Street Blown field — such is the hardware required to be successful in the elite world of modern burnout comps. It’s a Merlin III block fitted with Pro-Filer heads, a custom alloy blower manifold and a 16/71 Littlefield pump. Quality internals include JE pistons, Oliver rods and a Callies crank, with an MSD Pro Mag igniting the spark.

The driveline is every bit as hardcore, with a Dedenbear ’Glide and fully fabricated 3.5-geared full-floater rear end by Street Car Fabrications.

Poke your head through the window and you’ll soon see that dark and sinister is the order of the day, but with no rego requirements to fulfil, the biggest surprise is that the car is right hook. 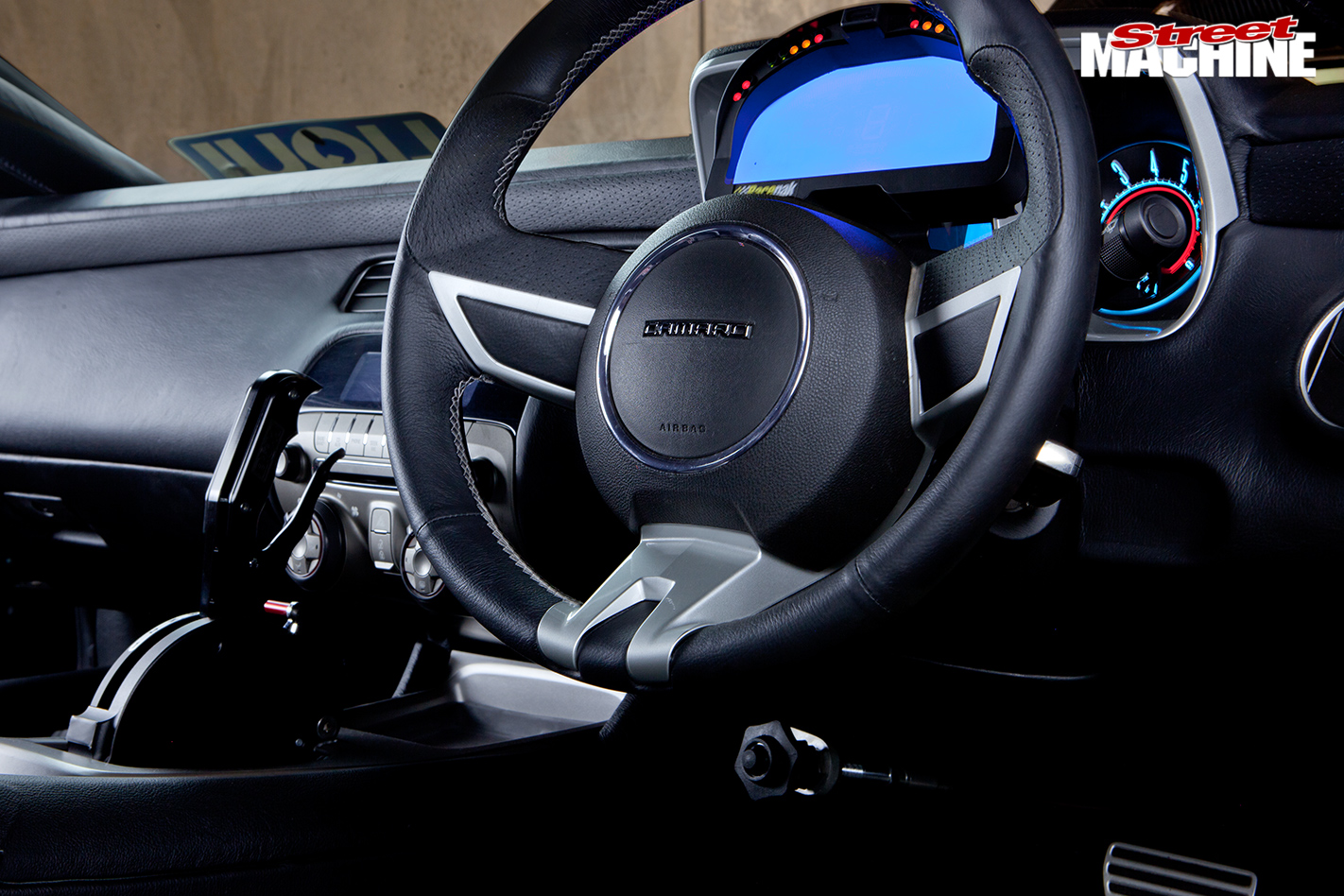 "We converted it to right-hand drive because I didn’t want people to think we just brought it over from the USA — I wanted it to have an Aussie feel. The guys at Motor Cars International were a big help with the conversion,” Steve says.

“I wanted to keep the dash looking standard and move away from having gauges hanging off it everywhere, so I went with a Racepak data logger which gives me all the info I need.”

Carmine Carofano got the nod for the interior fit-out, and everything about it screams quality, including the rollcage which, like the re-bolstered Camaro pews, has been trimmed in hand-stitched buffalo hide leather. 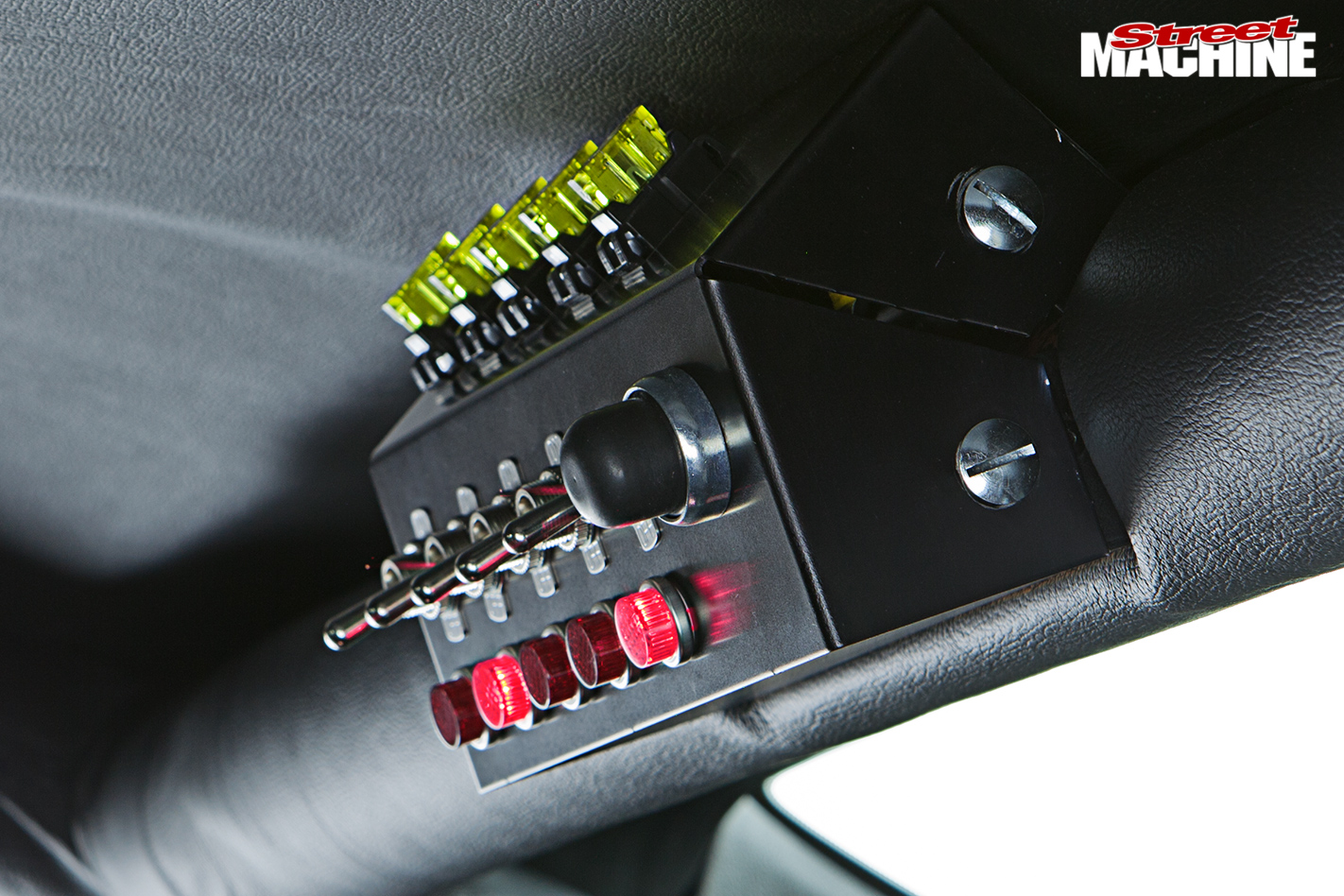 First time in the ring for KILLA-B will more than likely be a demo skid as part of Les Adams’s Team Extreme at the upcoming Springnats event, and Steve will continue trashing tyres at most of the other Autofest shows.

There’s little doubt the Camaro has the grunt and attitude to become one of Australia’s foremost skid cars, and we can’t wait to watch it transforming tyres into trash. 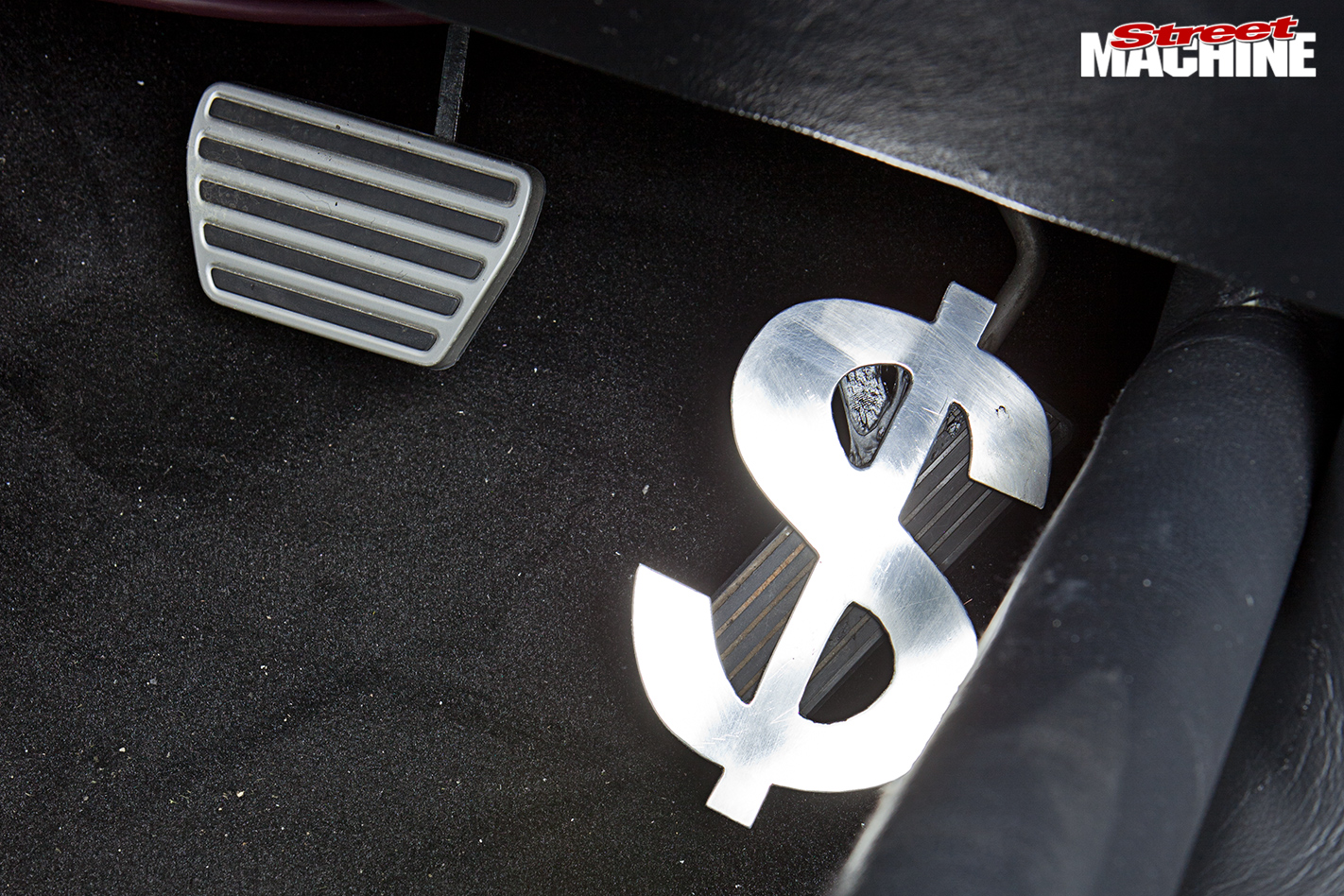 Obviously those massive 405 Pirellis will be too expensive to destroy on a regular basis, so Steve has a contingency plan: “We’ll run on tall profile 17in tyres on Territory wheels, probably around a 245/60/17 which is a standard SUV tyre. We’ll try to load the engine up a bit if we can — I reckon it’ll use about 80 to 100 litres of methanol per skid. The plan is just to take it to burnout events all around the country and cane the hell out of it!”