MANY builds start with a clean slate – no history, just an old car and a new owner with an eagerness to make it their own. Not this build; when Matthew Christodoulou started stripping his uncle’s EJ, he found a lot of history, including confetti dating from his parents wedding! It was then he decided that the mild-to-wild refresh he had in mind needed to be respectful of the car’s life from before Matt was even a twinkle in his old man’s eye.

Loving this EJ has been a lifelong affair for Matt, but not so his dad Chris, who paid $50 for it as a parts car

The old man in question, Chris, paid 50 bucks for the car back in the 1980s, with the intention of using it for parts to repair a biffed EH. But as often happens in build stories, the EJ ended up being a better car, so the roles were reversed. 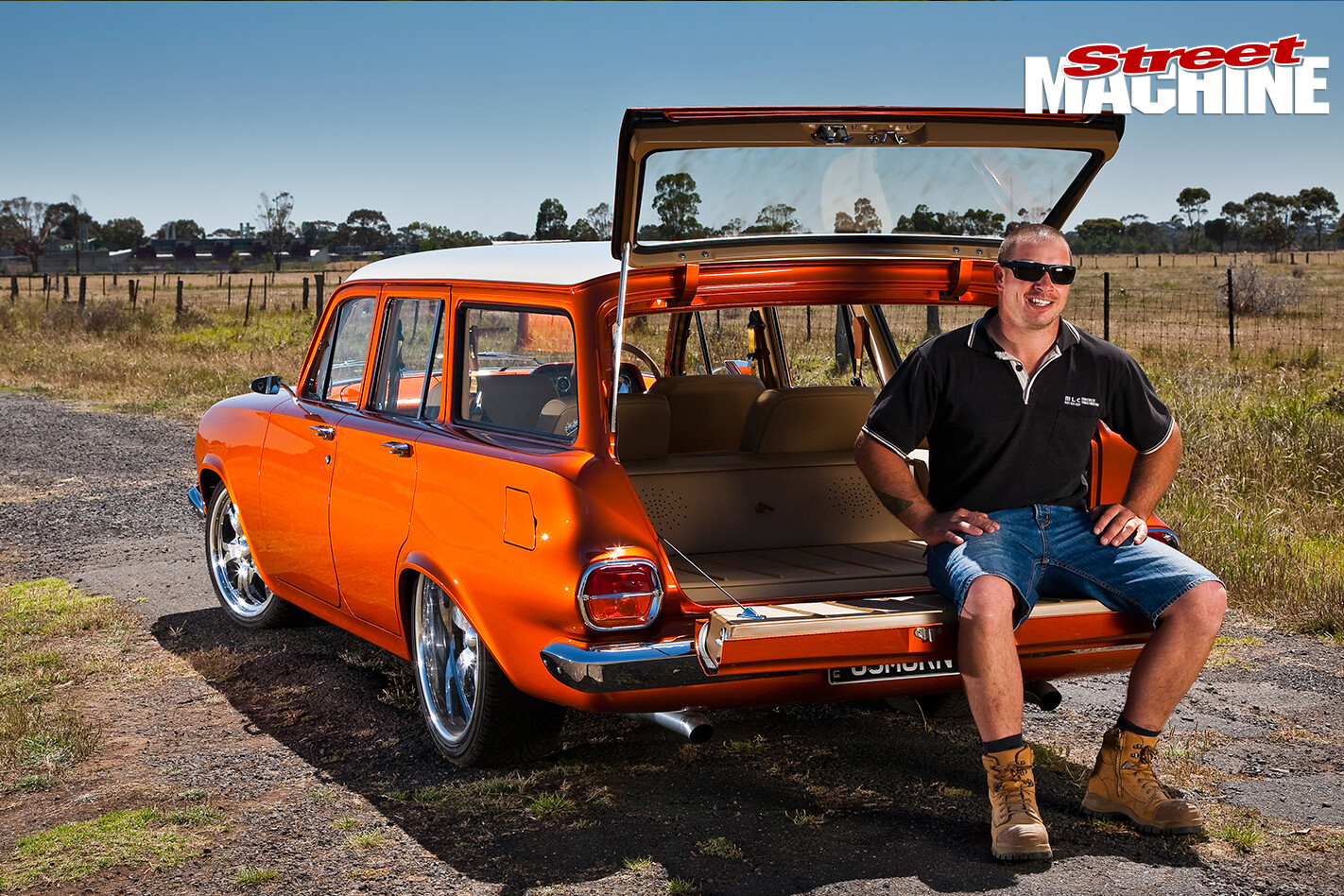 Chris gave the EJ a quick lick of paint and a set of mags, then set about cruising. When he got married and had kids, he shifted the car to his brother Nick. Uncle Nick pinged the old grey six, fitting the EJ with a small-block Chev by way of an early Hadfield front end, then backed it up with a Muncie Rock Crusher four-speed. As soon as Matt could talk he’d pester Uncle Nick for rides in the EJ, or even just start-ups in the shed, so addicted was he to that V8 rumble. So when Nick decided it was time to move the old EJ on, Matt was first in line.

After stripping the wagon in his shed, Matt had a vision. “I wanted to keep it like an old-school build,” he explains. “But things got out of hand!”

Matt says he wanted to keep the stock character of the engine bay. It only had a tidy up and a few holes filled

Matt sourced all the replacement, repro and NOS parts to be fitted and got a bloke to build a new engine, then threw the whole lot at Fast Lane Speed Shop in Ballarat, Victoria. 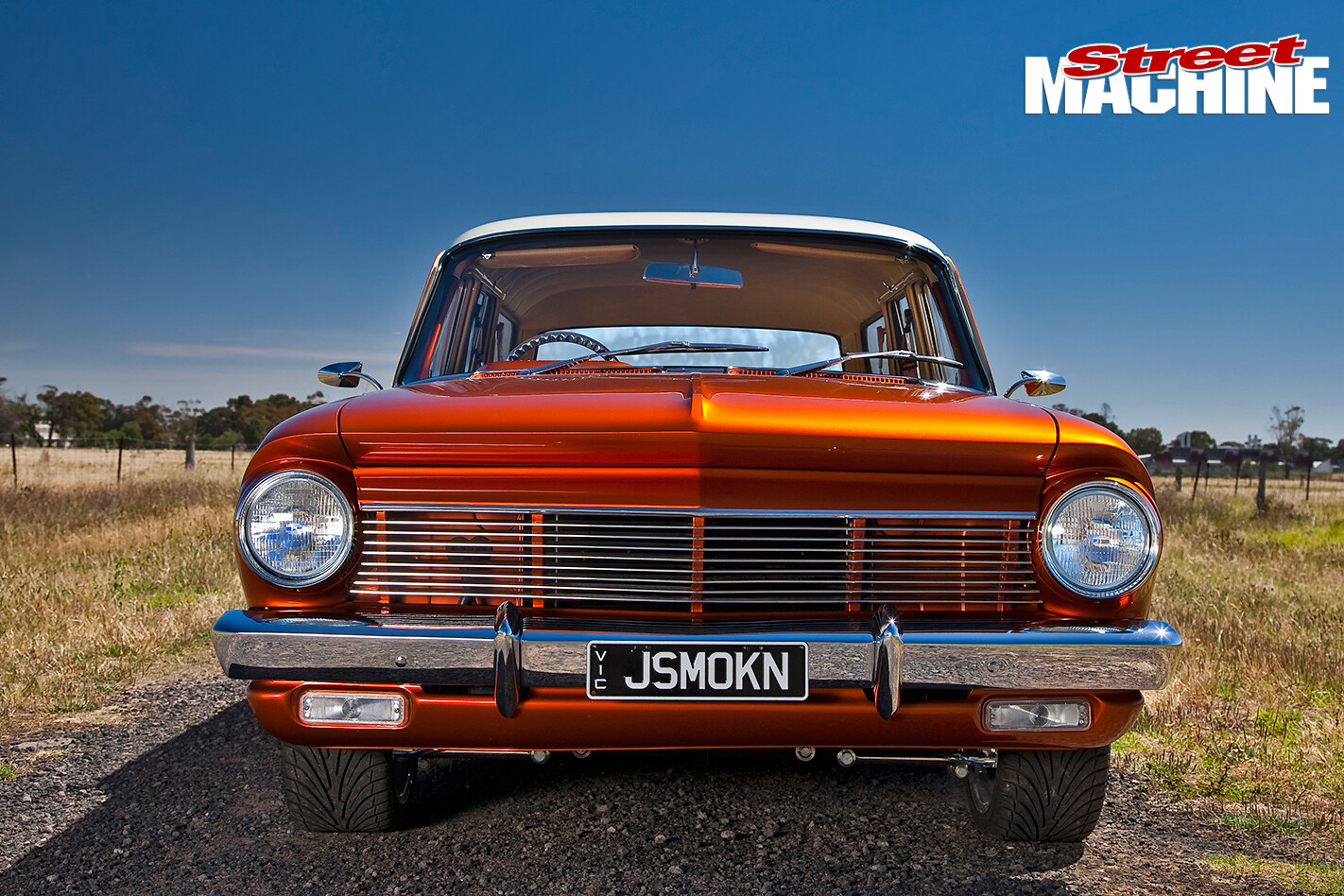 The boys at Fast Lane picked up the project and ran with it, suggesting some updates to bring the EJ into the 21st century, though Matt, true to his vision, insisted on some traditional street-machining throwbacks.

“It had to run the Muncie Rock Crusher,” he says. “It always had it in it as long as I can remember and it’s about the only thing we didn’t replace!” 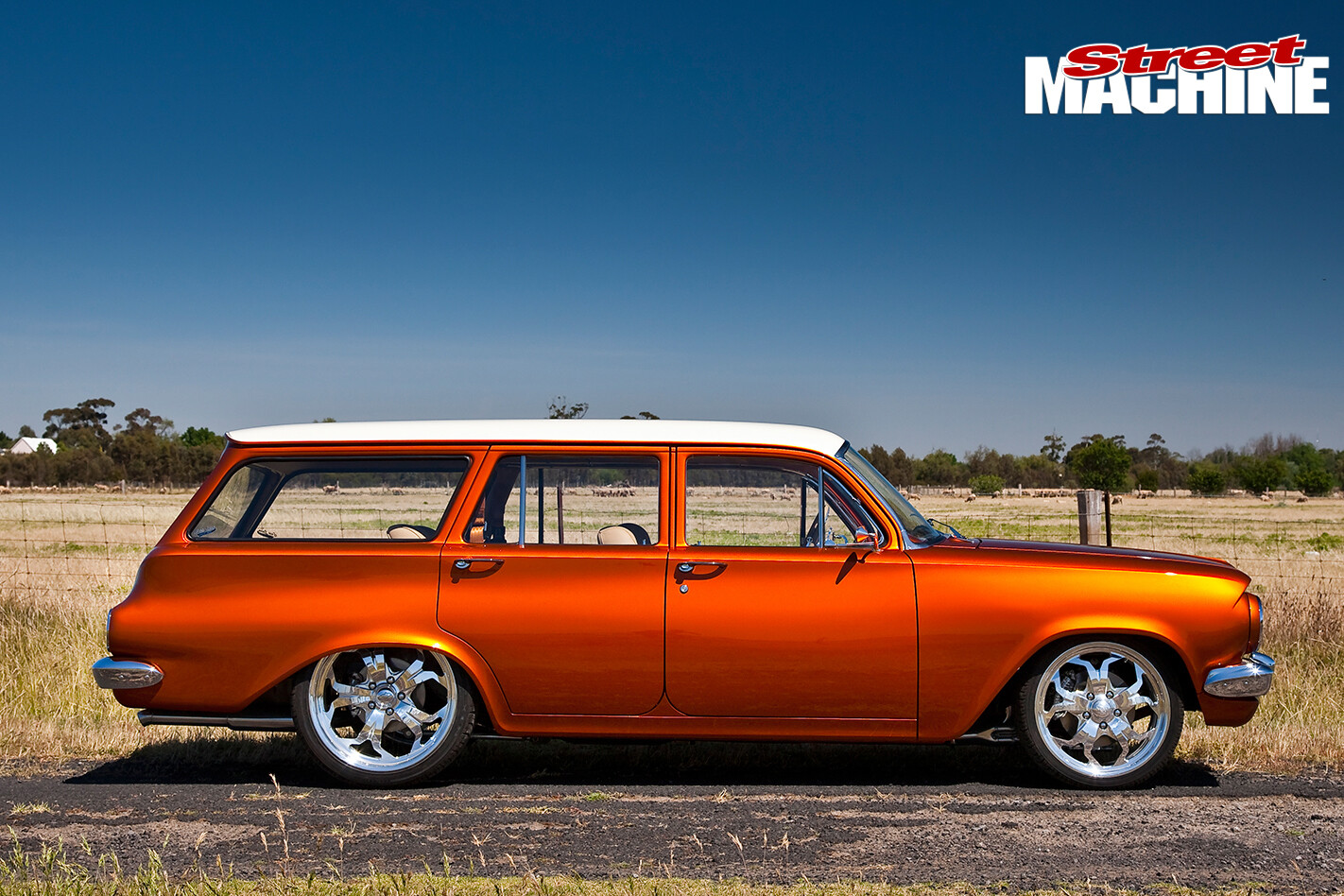 Matt was also keen on keeping the original colour, but Daniel Cassar at Fast Lane recommended Glasurit Custom Bronze; it’s a close match but has more pop. Combined with the white roof, the wagon retains a timeless feel, despite the eye-catching Intro Viking rims.

Ah yes, those rims: 18x7 on the front and a full 20x8.5 on the rear! “I pretty much bought the wheels first up, and got Fast Lane to build the car around them,” Matt explains.

Clean as a whistle underneath with custom everything from the Chassis Engineering diff housing, to the twin mandrel-bent exhausts and four-link rear end with horizontal Panhard rod

Fitting the Intros necessitated some tricky suspension work; a Rod-Tech Deluxe coil-over system holds up the business end, while a full custom parallel four-bar set-up accommodates a Ford nine-inch down the back. 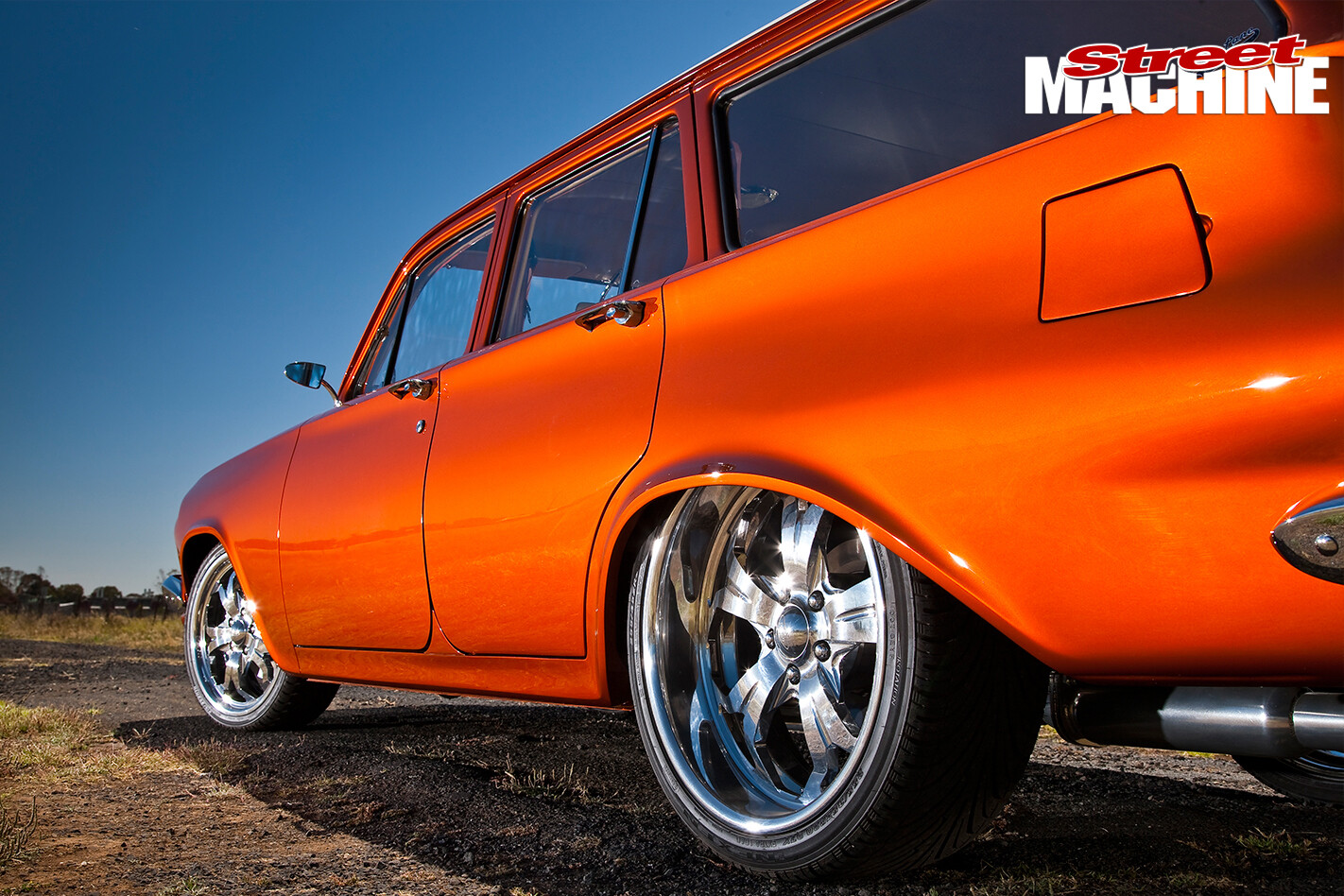 Although the EJ has been treated to a minor degree of tubbage, Matt denies the rear arches needed any massaging to suit the 20s; the EJ’s long aperture afforded enough clearance for the huge hoops.

“This project took some time,” Matt admits. “I got the motor built about four years before she was ready to fire up. I didn’t know a lot about the specs, so I called up the engine builder to get some more detail.” Unfortunately for Matt, the bloke’s now ex-wife answered the phone. “I kicked that bastard out!” she yelled, then hung up. End of conversation.

Without any data on the guts of the 383, Daniel at Fast Lane recommended the donk get looked at, so Paul from Paul Rogers Performance Transmissions was asked to strip it back down. Fortunately for Matt, it turned out old mate had done a better job on the engine than his marriage. Paul did some minor balancing, then prepped it for the first start-up. 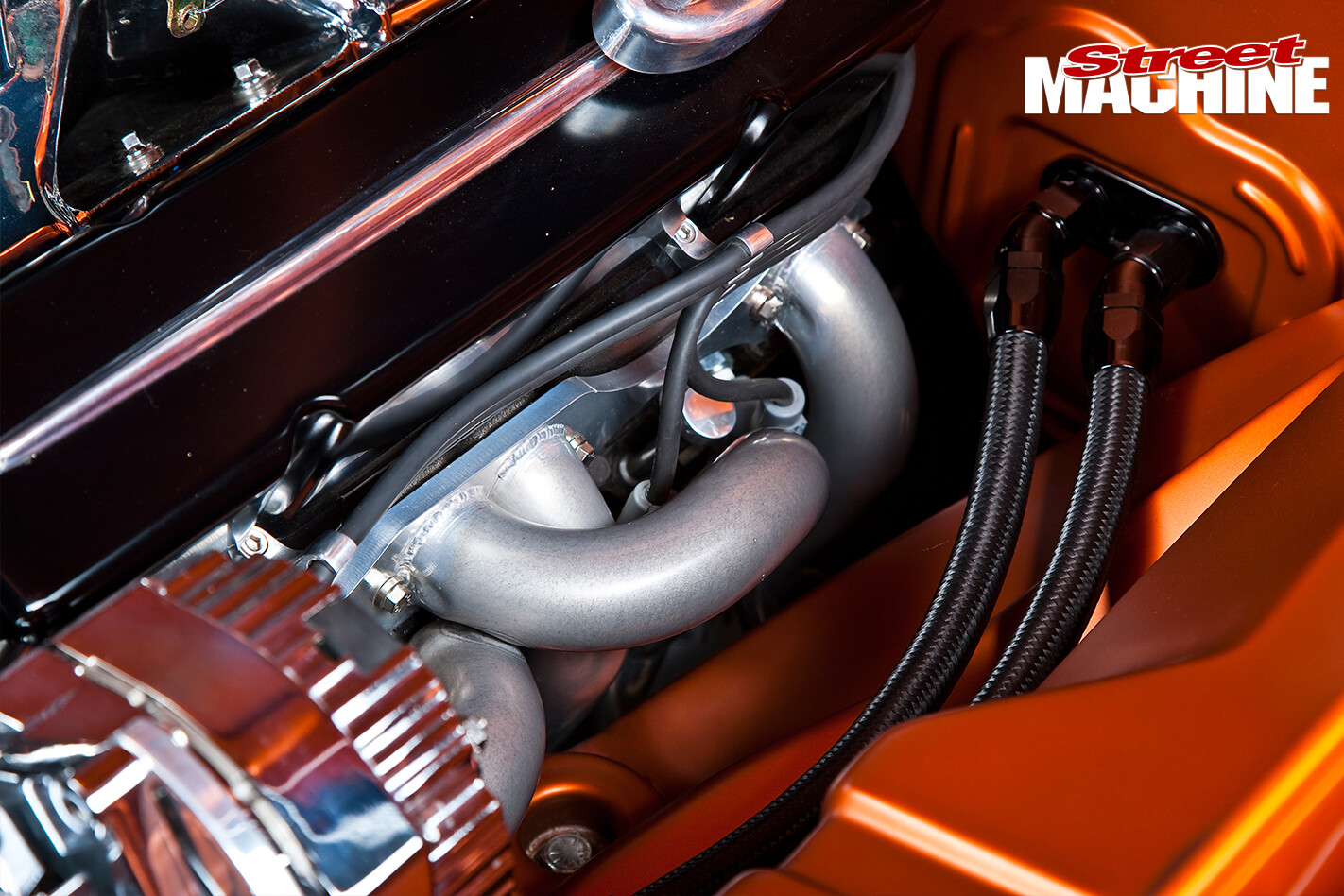 All the while, Daniel and the team at Fast Lane Speed Shop were working on the body, tidying it up for paint. Uncle Nick had installed some huge holes in the engine bay to fit the extractors, but the boys recommended they be filled and new headers manufactured to suit. Sure, Matt was keen to retain some authenticity, but dirty great big holes weren’t on the list.

The goal for the EJ was for it to be a very comfortable touring car. The interior is flawless, the stereo hidden and the air conditioning is cold!

Fast Lane pride themselves on being a one-stop shop, should the customer choose to keep their hands off the build. They handled panel, prep, paint, exhaust, suspension and the engine installation, but subcontracted the interior to Adrian at Kool Trim, once they’d sourced the basics. New pews were ordered, sans foam and trim, from Glide Engineering of Rancho Cucamonga, California, while a rear bench was custom-fabricated between the tubs; both were sculpted and trimmed to match. 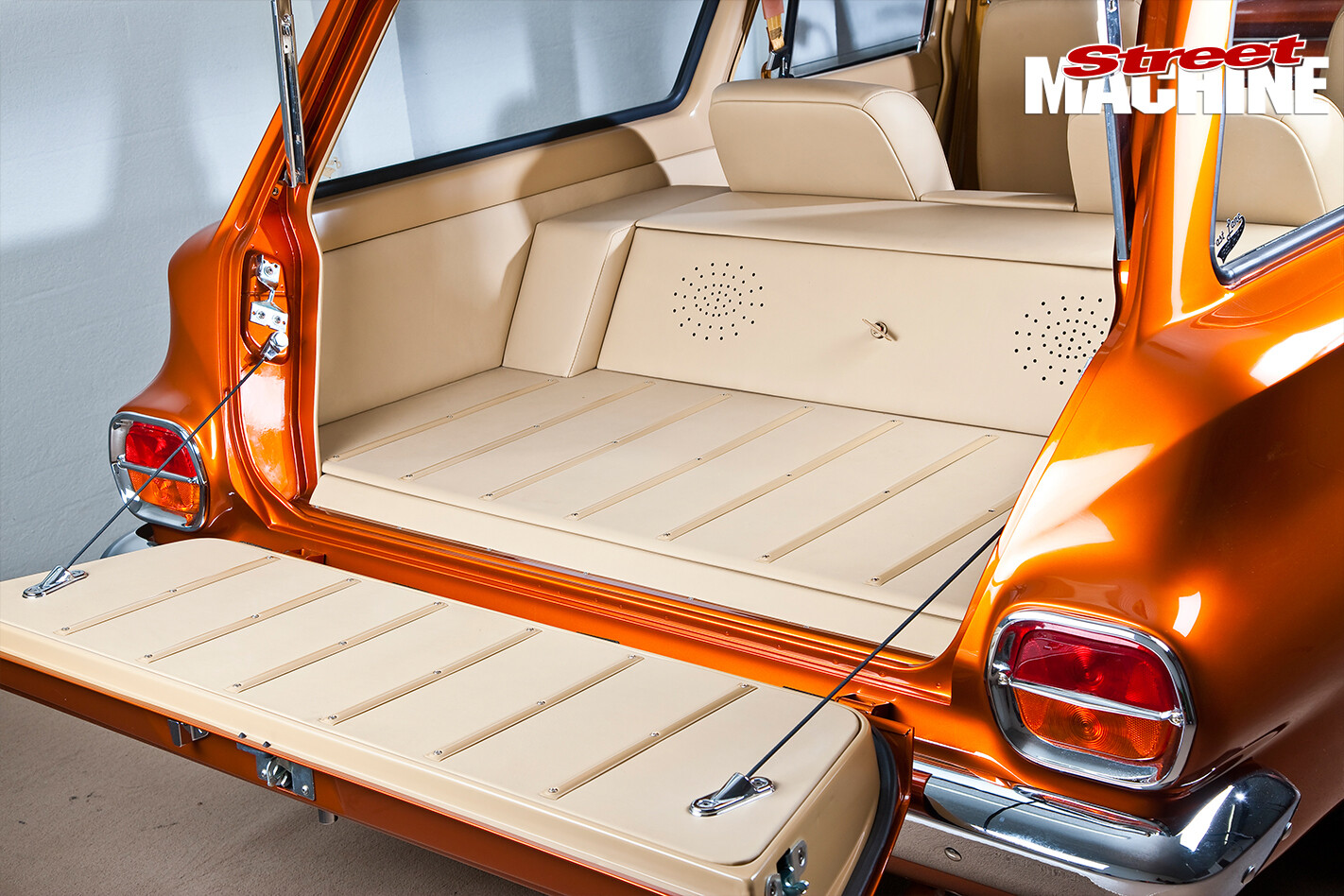 Although the build did get out of hand and the EJ has already garnered its fair share of tinware, Matt is happy to keep it a cruiser. “My aim is to get out there and have some fun,” he explains.

“The olds used to go camping in it before I came along. Who knows, maybe I was part of the fun back then after all!”