Building a tarmac-shredding brawler that looks like it belongs in the RSL car park is one of the hottest tickets around at the moment, because few things are better than dusting up show-ponies who fancy themselves a bit too much. 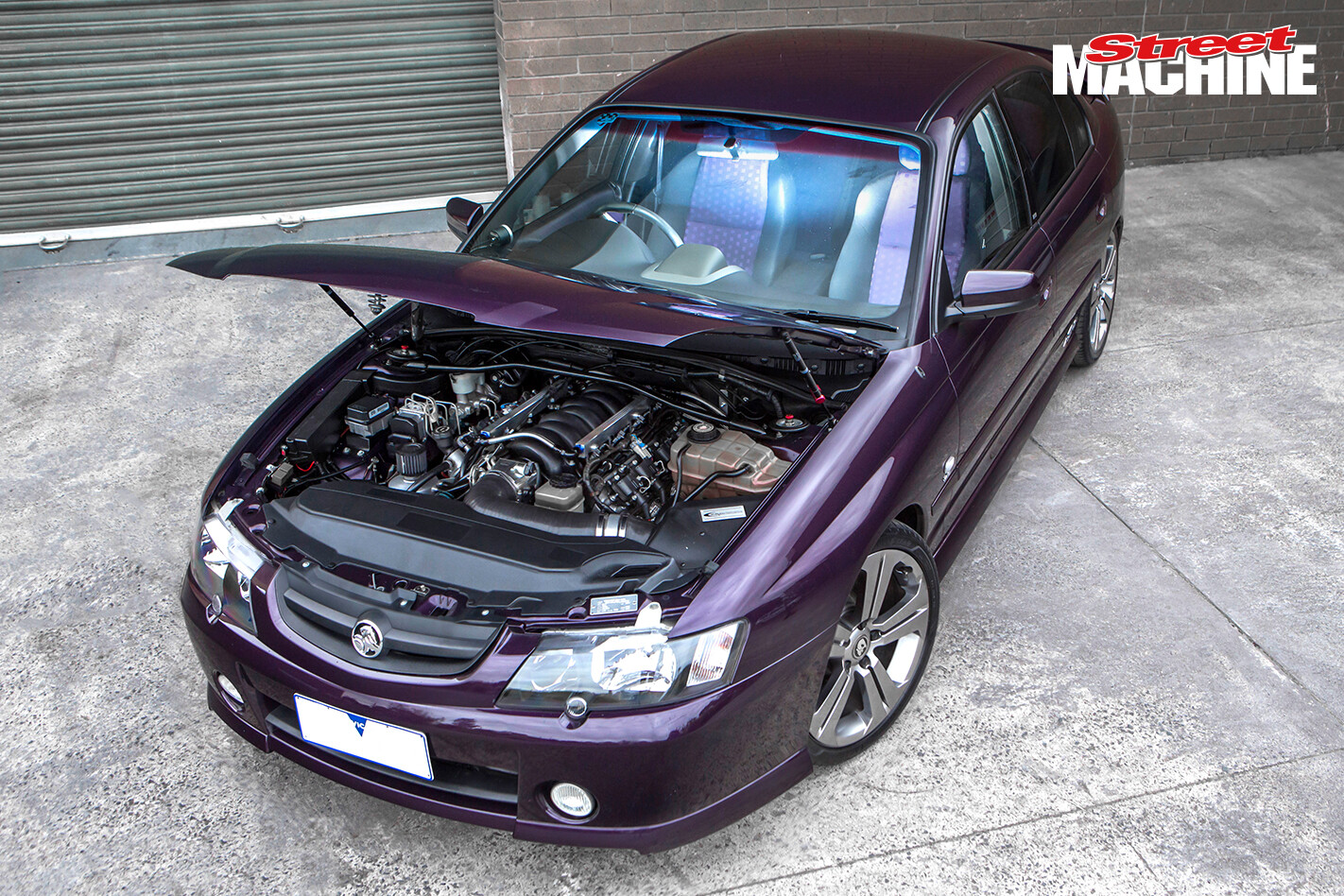 This Cosmo Purple VY SS is a perfect example. It’s prowled Melbourne streets unnoticed for almost six years with a full-tilt forged 427-cube LSX motor inflated by a pair of turbochargers concealed beside the transmission. We spotted it while it was at VCM having the gearbox replaced. At first we ignored it on the hoist, but then we spied all the oil scavenge lines and pump under the front end, and the turbos hanging out the back of the trans. 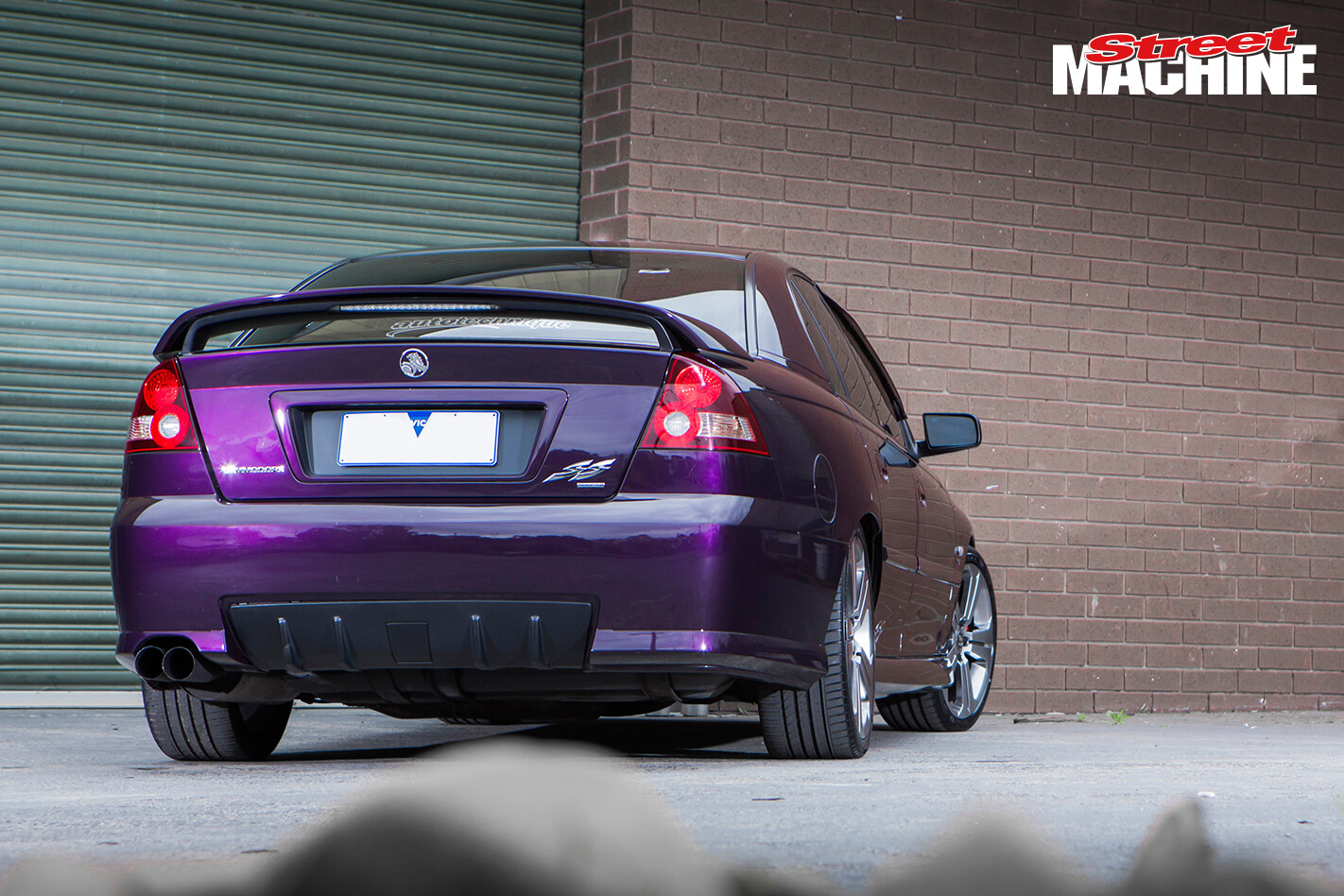 Owner Darren Paul bought it off original owner Frank Gyofri with a dead 4L60E, so Phil Genio and the boys at VCM/Autotechnique worked their magic on the sedan, having originally laid spanners on it over a decade ago. 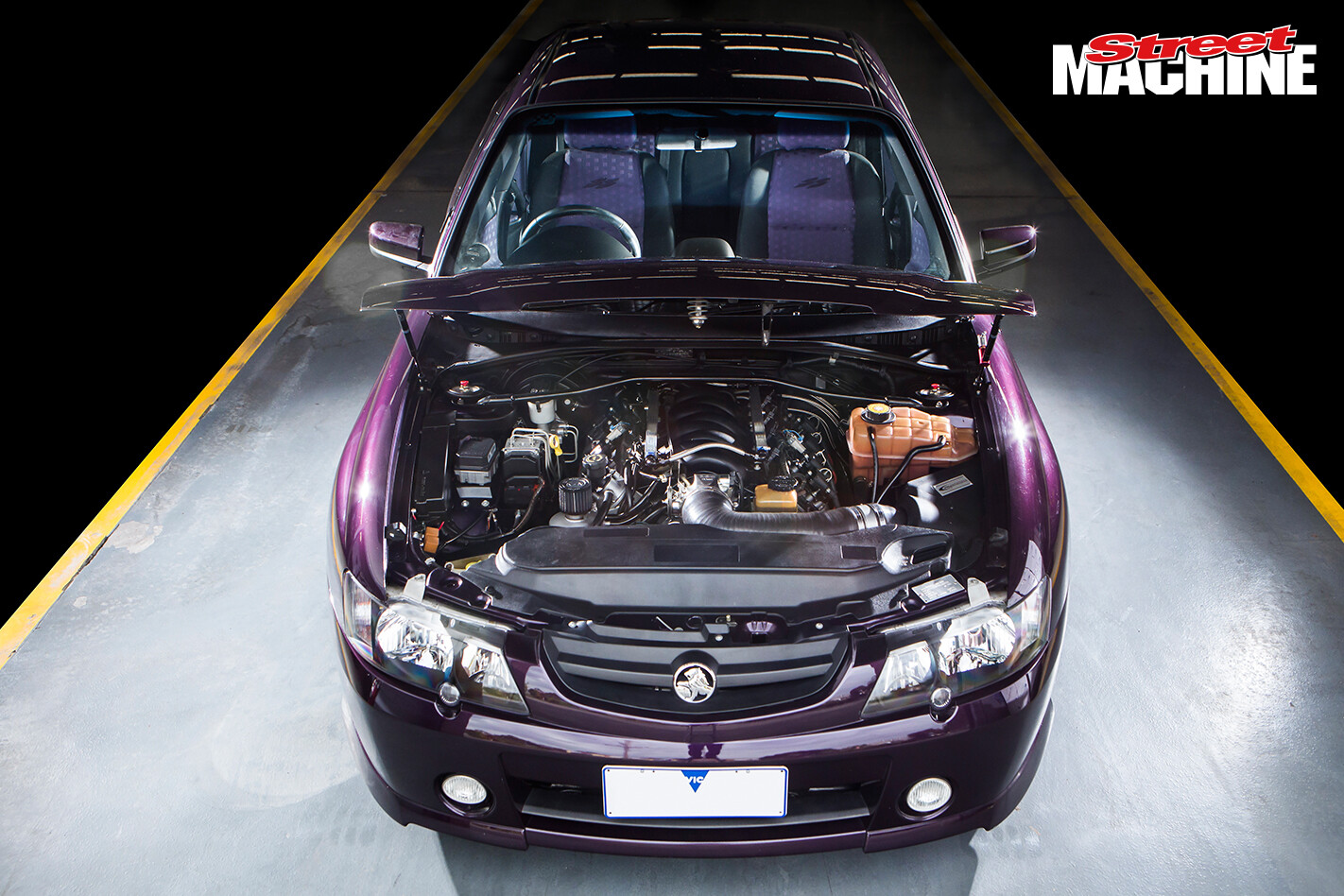 “Frank brought the car in to Autotechnique for a head and cam package as a stock 5.7-litre, around 10 to 12 years ago,” Phil says. “Around nine years ago, he brought it back to us to fit the twin-turbocharger kit as he’d gotten bored of the power and wanted more. Then, around six years ago, Frank decided he wanted to go further again, and at that time the LSX aftermarket blocks were very new. You couldn’t get boost-ready crate motors easily in Australia so we built the current motor off a bare 427ci block.” The block was stuffed with a Callies crank and rod combo with Diamond pistons and Teflon race bearings, while VCM’s own 7.300-inch pushrods got the nod, along with a 233/238/114 cam and Lunati tie-bar lifters. As with any big-inch forced-induction build, oiling is critical, so the sump on the purple monster is a custom unit, based around the factory item but enlarged to hold nine litres of oil and also carry turbo oil drains. Aussie turbo-tuning company APS was red hot on the LS scene back in the early days. It specialised in making turbo kits for all manner of naturally aspirated and forced-induction cars, including LS Holdens. The kit on this VY is one of its Stealth units that hides the turbochargers at the back and bottom of the engine bay near the bottom of the transmission bellhousing, with oil and coolant lines running forward to under the front of the motor. An air-to-air intercooler hides behind the stock grille and front bumper. It chills intake charge and works with the E85 fuel to stave off detonation from melting pistons and turning the iron LSX block into an expensive pretzel. Phil says the combo is limited by the turbos. “One issue we had is space for all the oil and coolant lines, plus the physical size of the units because they’re tucked down behind the motor.” Still, he’s managed to soft-tune the combo to 512rwkW at 12psi, an impressive feat given it has to turn a transbraked Powerglide with a 3200rpm TCE converter. Along with a modified tailshaft, the rear end has copped 3.7 diff gears and a Kaaz LSD centre. 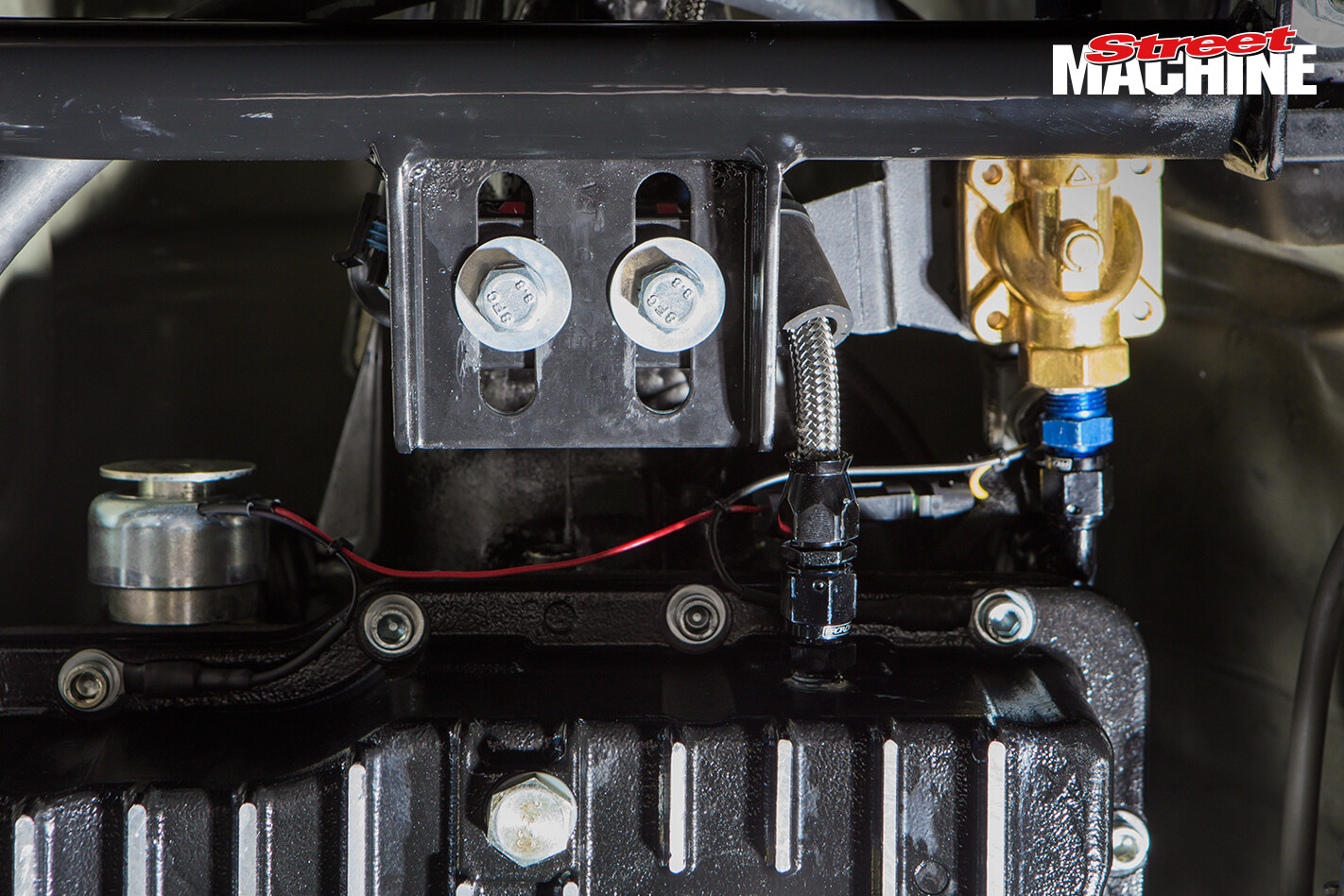 “The car had a built 4L60E four-speed auto but they’re not very strong and couldn’t handle the power,” Phil says. “[So Darren has] gone straight to the built two-speed Powerglide.” Even though it never came with one from the factory, fitting the two-speed auto proved to be a simple task thanks to the huge aftermarket the VT-VZ Commodores enjoy. And, as turbo builds become increasingly popular, more punters are realising the two- and three-speed ’boxes work exceptionally well with them. “It’s got a transbrake, as Darren wants to eventually race it, but it also has a new invention called a Converter Dump,” Phil says. “This is new technology that dumps pressure in the torque converter as you bring the car on stall and up on boost. This makes the car leave the line much harder and should make it a fair bit faster, too.”

While the ’box is cutting edge, Phil admits that if it was his car he’d be tempted to go back through the VY and redo some of it, purely because the parts and technology have moved on a huge amount in the past several years. 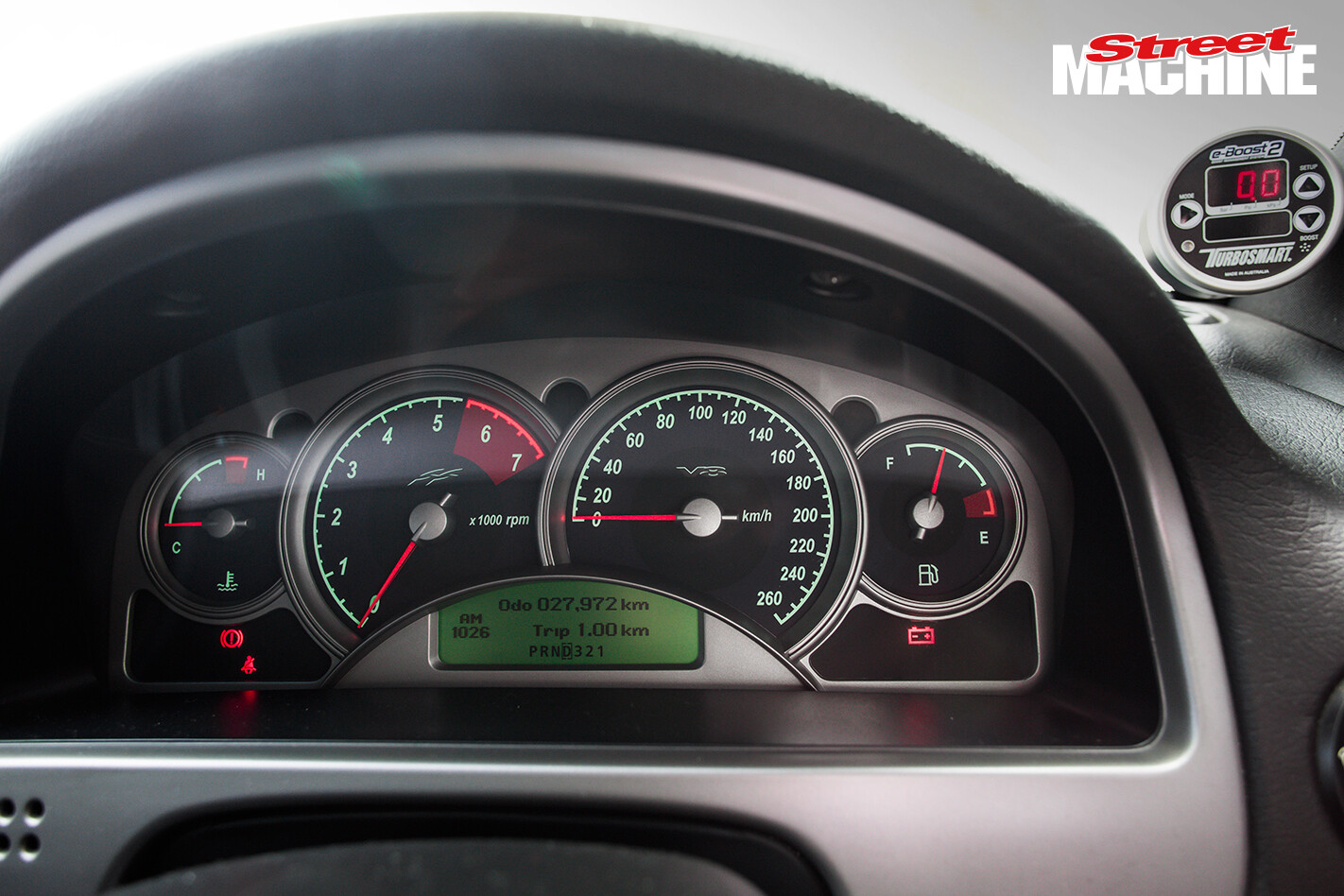 “I’d love to change those old-tech turbos for a big single, simplify all the plumbing as it is quite complex and redo the motor with some modern parts, just to see what the combo could really do. But it isn’t my car so it will cop some more rear-end work and a bit of racing!” We’re sure the punters in the next lane won’t know what hit them.