Heath Doherty's head-kicking Holden LH Torana is cooking with gas, and plenty of it

HEATH Doherty can pinpoint the exact moment in time when he became compelled to build a balls-out, big-block nitrous car. “It all started at Calder Park in 2012 when Simon Kryger first brought his Camaro out,” he says. “I saw it run at night time, and it just blew me away. That was the turning point; from then on I wanted to build a big nitrous car.” 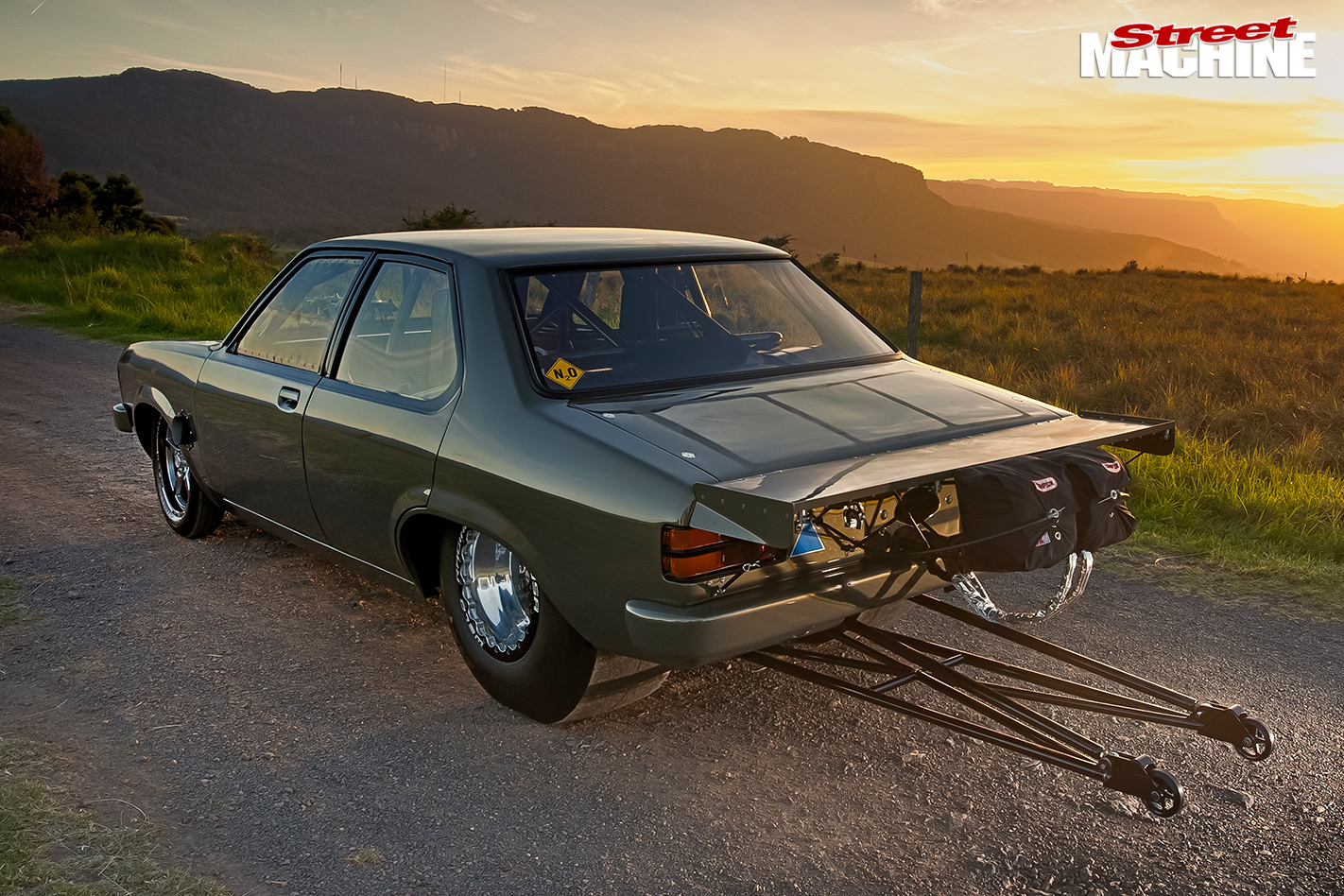 ARMED is pretty damned neat for a race car, the stunning custom-mixed paint was laid on by Dave Conford. Dave says it's turned out almost like a show car

Watching Kryger’s Camaro charge down the Calder Park quarter-mile with the candles lit was all the motivation Heath needed. He promptly bought a Torana hatch and an engine to power it, but when he got wind that the 632 out of Johnny Wilson’s STAUNCH Torana was up for sale, it was too good an opportunity to pass up. The only problem was, the big 632-cuber would almost certainly have torn his hatch clean in half. 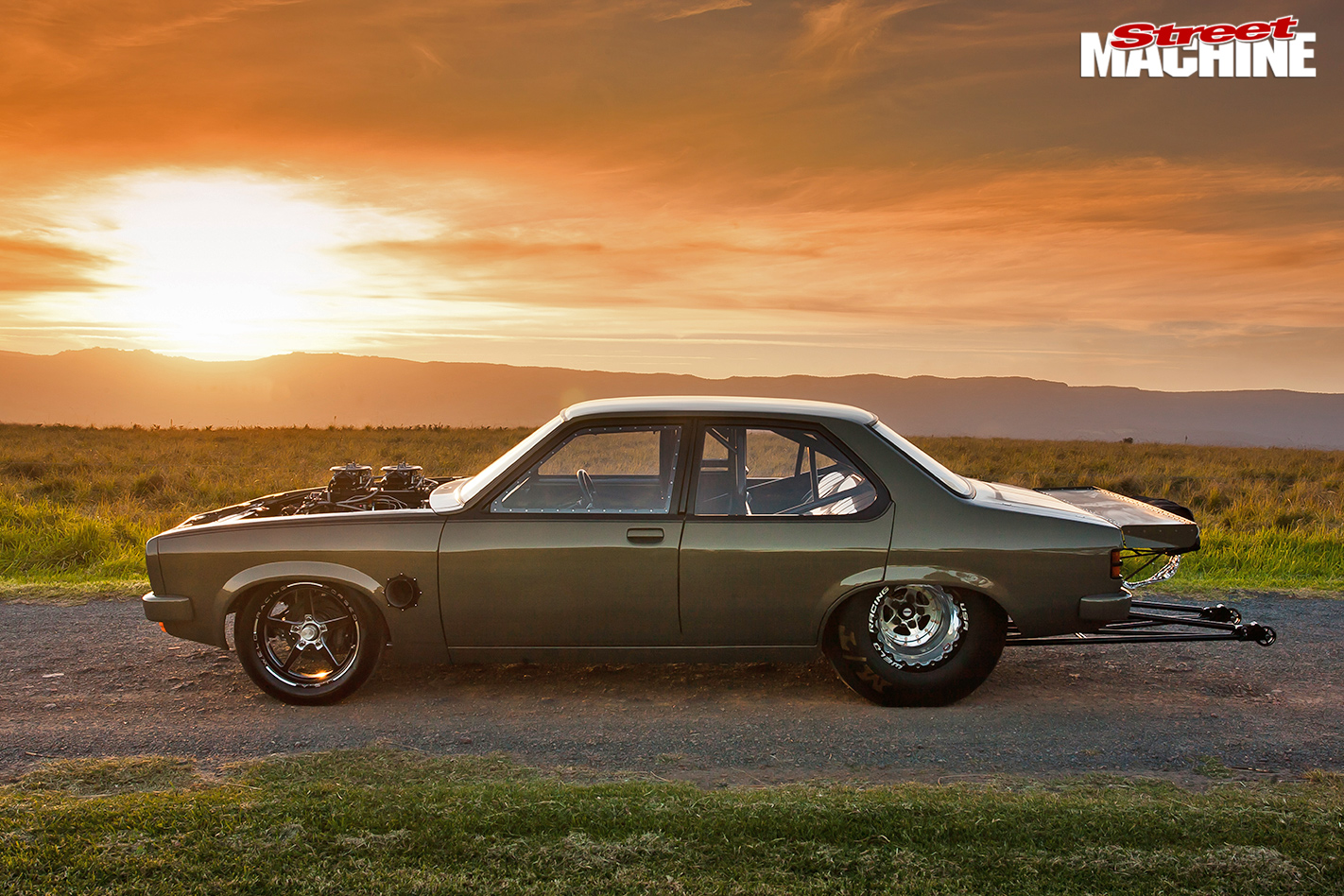 The wheel arches were stretched to accommodate 32-inch tyres, while the many fibreglass body panels were supplied by Alfa Motorsport Fibreglass

“Around that time, Krygs had the SUBTLE Torana for sale as a bare roller, so I jumped on it,” Heath says. “It was a killer car that had already gone 6.5s with a turbo combo.”
With a Profab three-quarter chassis and runs already on the board, the Torana was a great starting point for the nitrous-snorting fire-breather Heath knew he needed in his life, but he had to make it his own. Enlisting Kryger to project-manage the build, Heath proceeded to work his arse off to keep funds up to the money-hungry Torry. 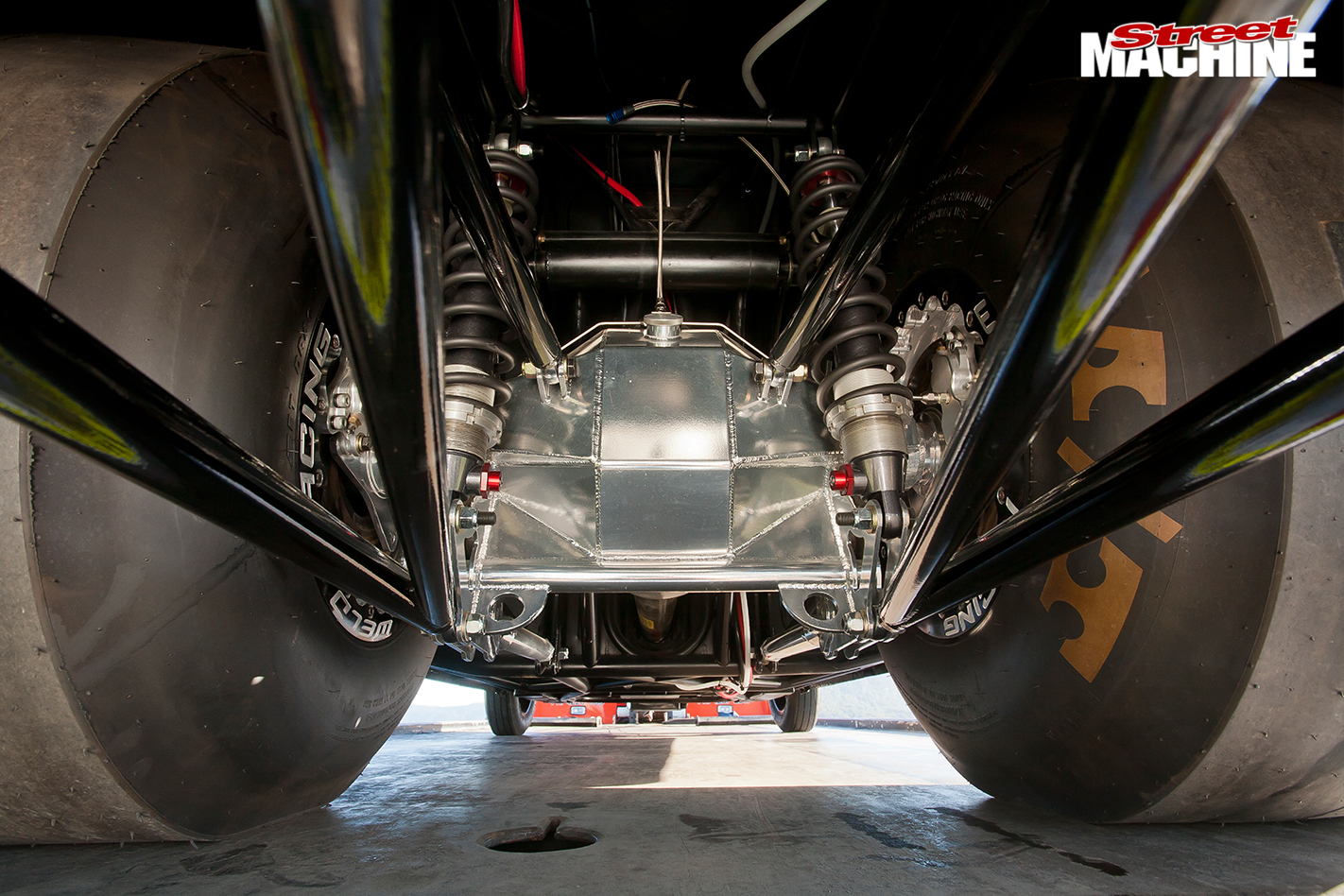 The front rails are still intact to meet Pro Street regulations, but from there back the chassis is all hand-built by Profab

DRC Group’s Dave Cornford took care of the body, which, aside from the roof and rear quarters, is all fibreglass. He also applied the killer duco, a custom hue mixed to Heath’s taste. “Dave killed it with the body and paint,” he says. “He’s a whiz with fibreglass and all the gaps are perfect. I don’t even know what to call the colour; it changes completely from grey to green depending on the light.” 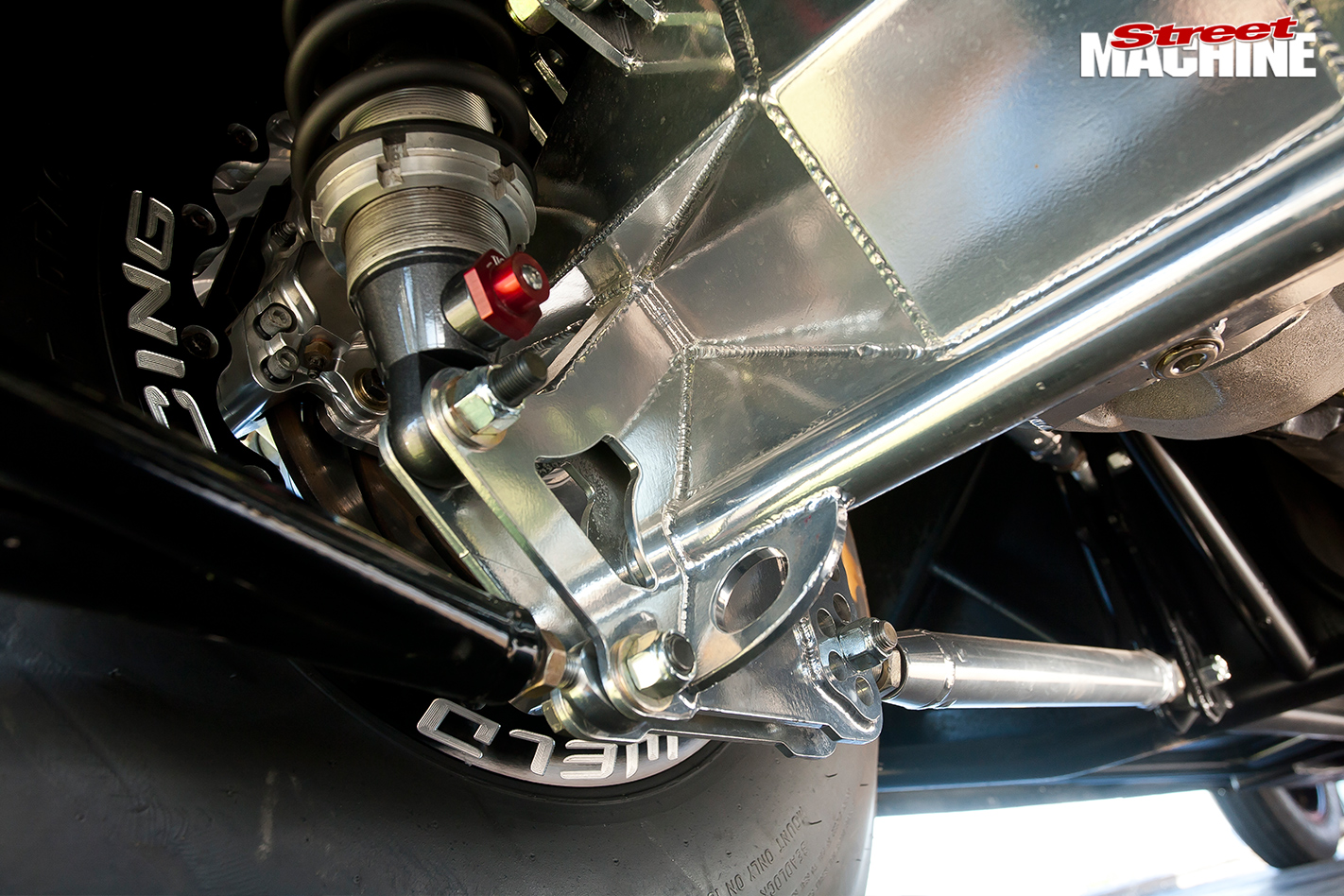 The engine was freshened by Sam at Westend Performance, and it sports all the good gear, from the twin 1250cfm APD nitrous carbs up top to the Stef’s aluminium sump down below. The intake manifold is a CFE sheet-metal item with billet runners, mated to a set of Big Chief 16-degree heads with titanium valves. GRP alloy rods swing off a Callies Magnum crank, with forged pistons specced for a lofty 15.5:1 compression ratio. It’s handy for 1270hp on Roo16 (a neat 2hp per cubic inch naturally aspirated), plus a whole lot more once all three kits of nitrous are doing their collective thing. “Sam is unbelievable,” Heath enthuses. “He always makes time for me even though he’s flat-out.” 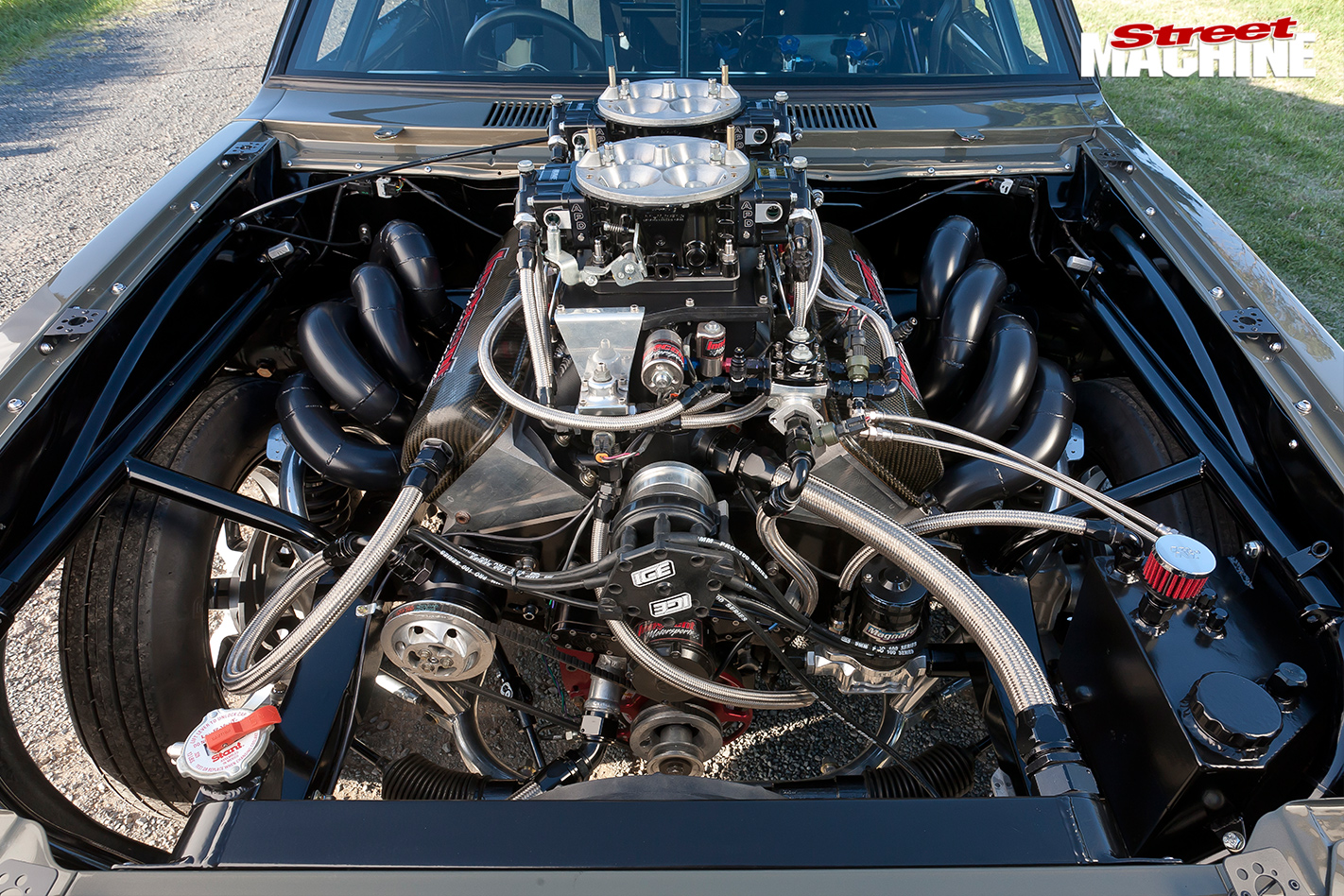 The motor is 632 cubes of awesome - it makes around 2000hp with beast mode fully engaged, and breathes out through a set of 2.25in headers

Around 2000hp in total heads south via a full-house Turbo 400 and a three-inch chrome-moly tailshaft to a full-floating, 40-spline sheet-metal nine-inch. All four coil-overs are Strange units, while Wilwood brakes and a matching pair of Simpson ’chutes haul the Torana back down to saner speeds after Heath has emptied the nitrous bottles. 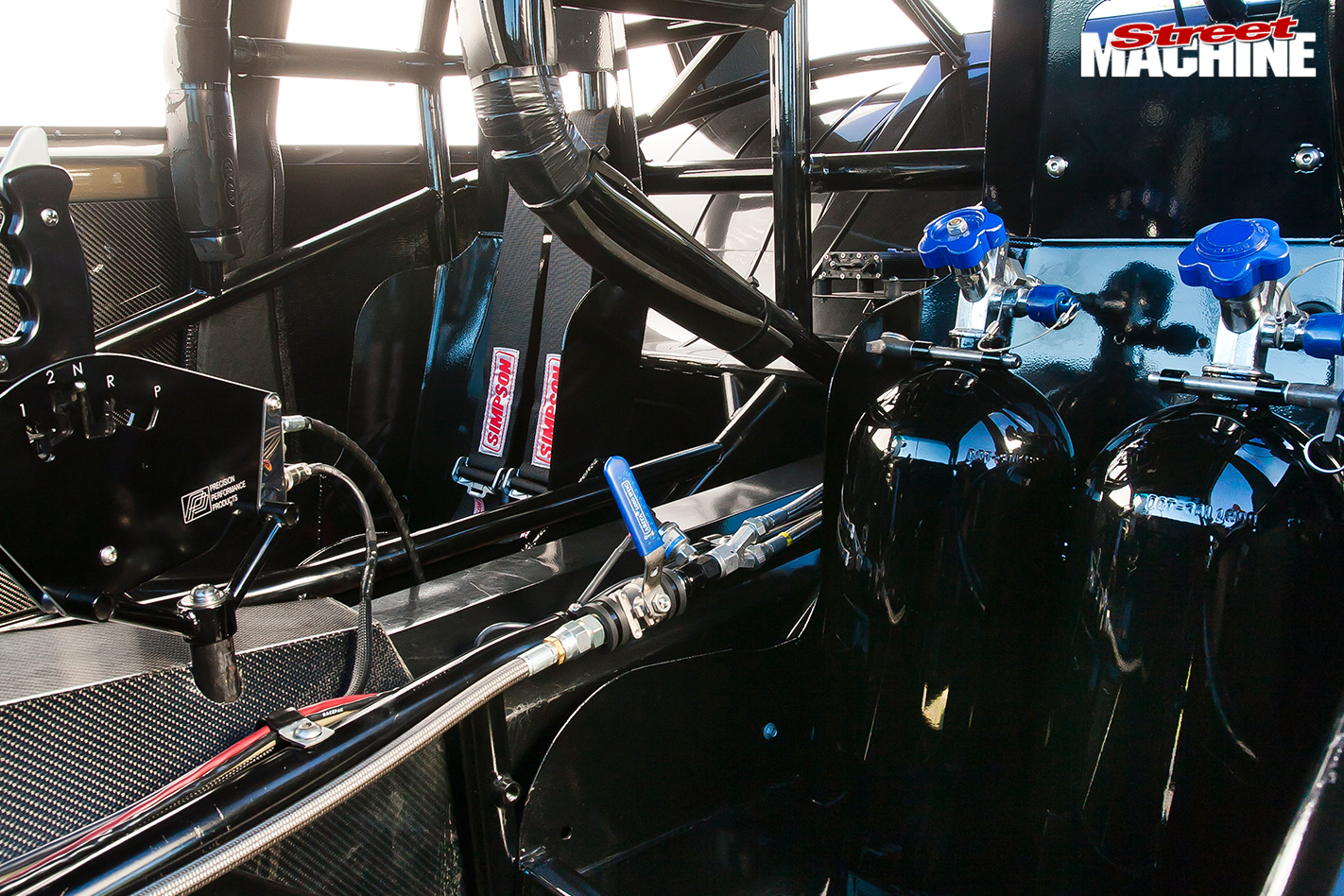 The car made some test hits in the lead-up to the inaugural Grudge Kings Sydney event, with some really encouraging results. “I’m still learning the car at this stage, so Simon drove it first time out,” Heath says. “It ended up going 7.7@181mph on one kit, but the converter wasn’t right. We’re chasing a six, and Krygs is all over it; he’ll get it going.” 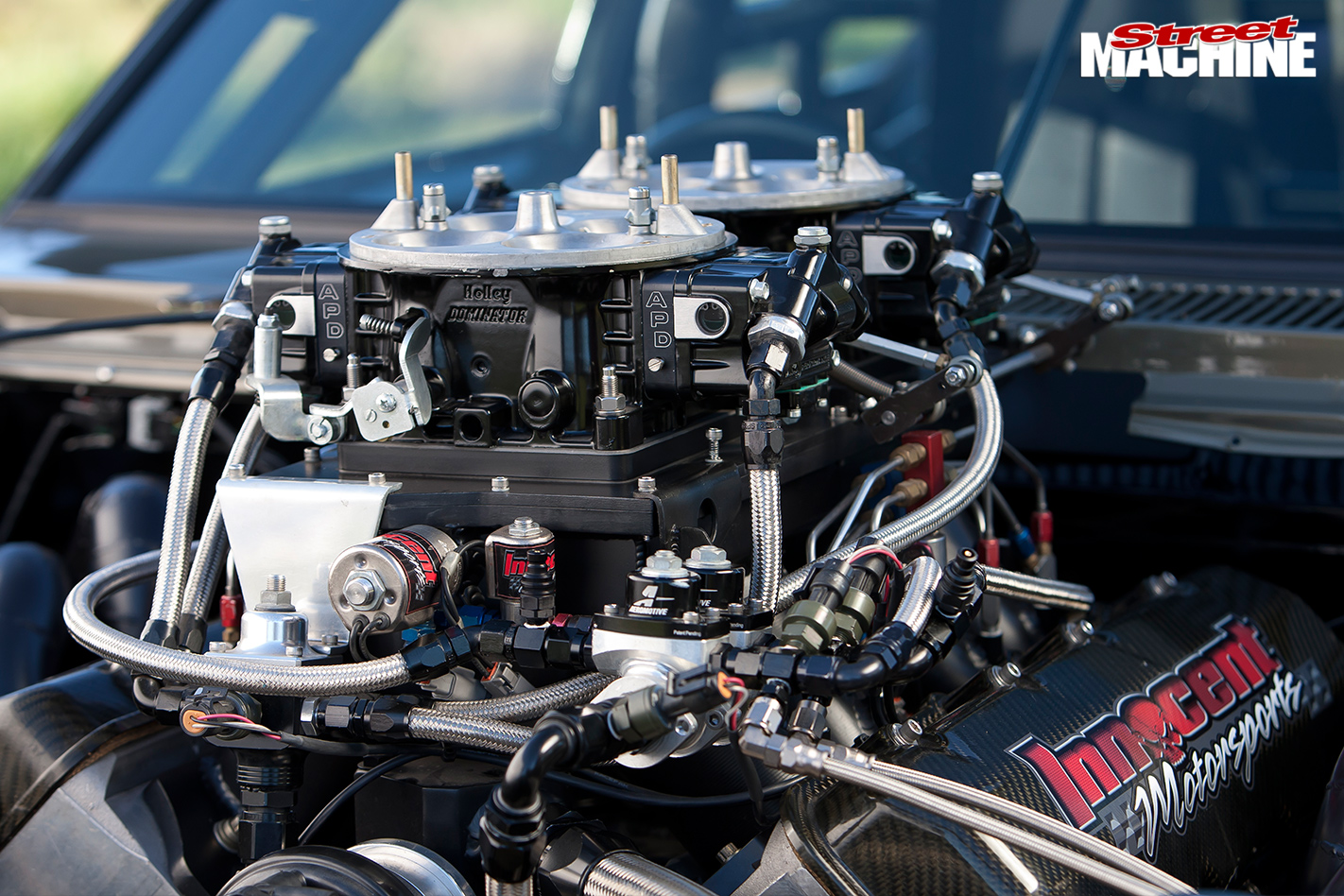 With Simon and fellow nitrous aficionado Mark Hayes in his corner, Heath is sure to get the results he’s after. “Hayesy is an absolute guru,” he says. “He and Simon are probably the two best nitrous guys in Australia, and having them both in the pits reading plugs and helping out with the car is unreal. They’re old-school, but they’re the best.” 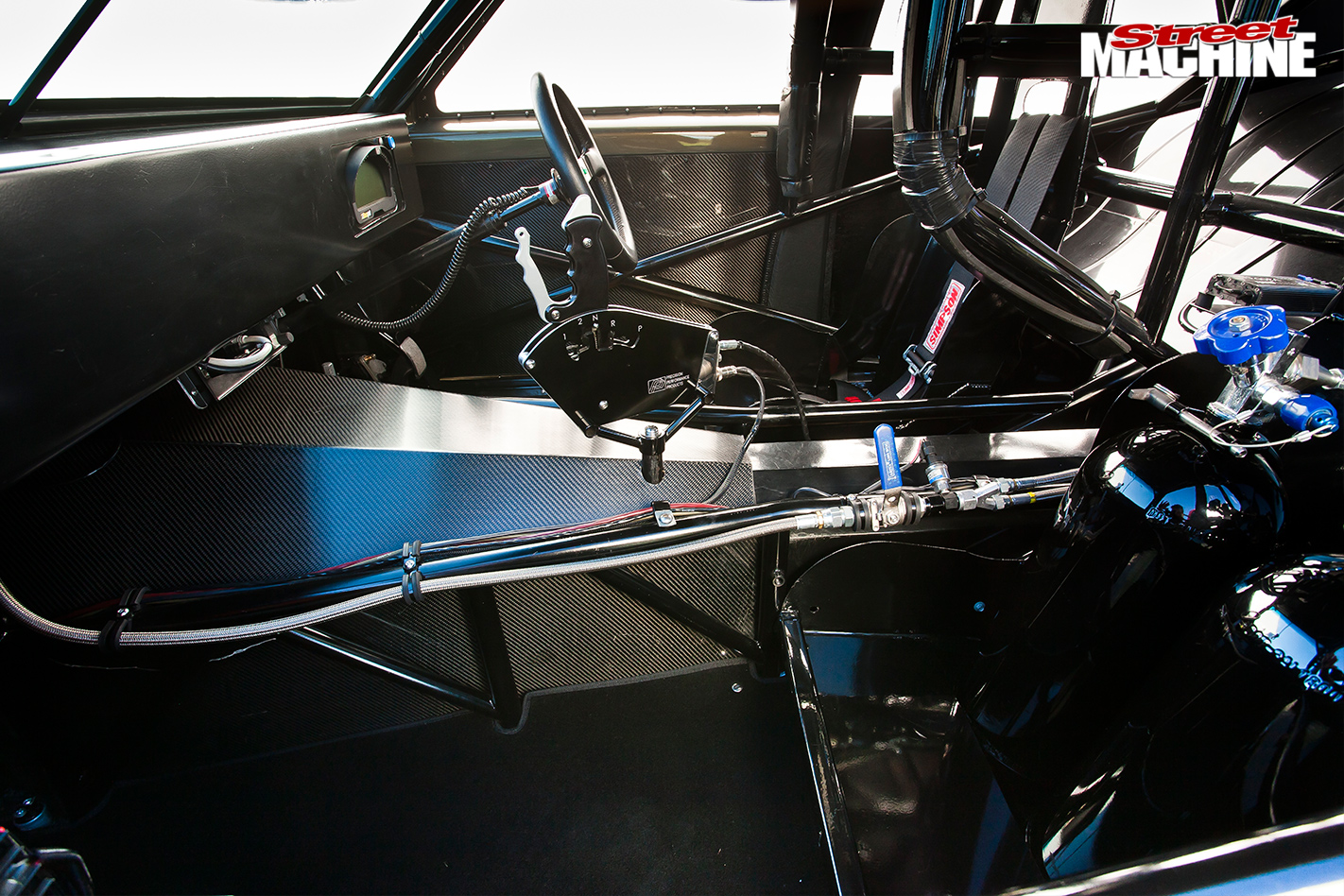 Framed by a chrome-moly 'cage, the cockpit is all business. Kirkey race seats with Simpson harnesses, a Strange steering wheel, Racepak dash, Precision shifter and acres of carbonfibre are all about staying light, informed and in control

The car can run in either Pro Street Blown or Outlaw 10.5, but Heath tells us that the focus will be on Pro Street until he converts to EFI and gets a bigger engine. Yep, bigger than a 632ci! “The goal is to get an 800ci-or-bigger motor for it,” he says. “Simon has had his 800-cuber mocked up in it – it fits, so that’s the plan. 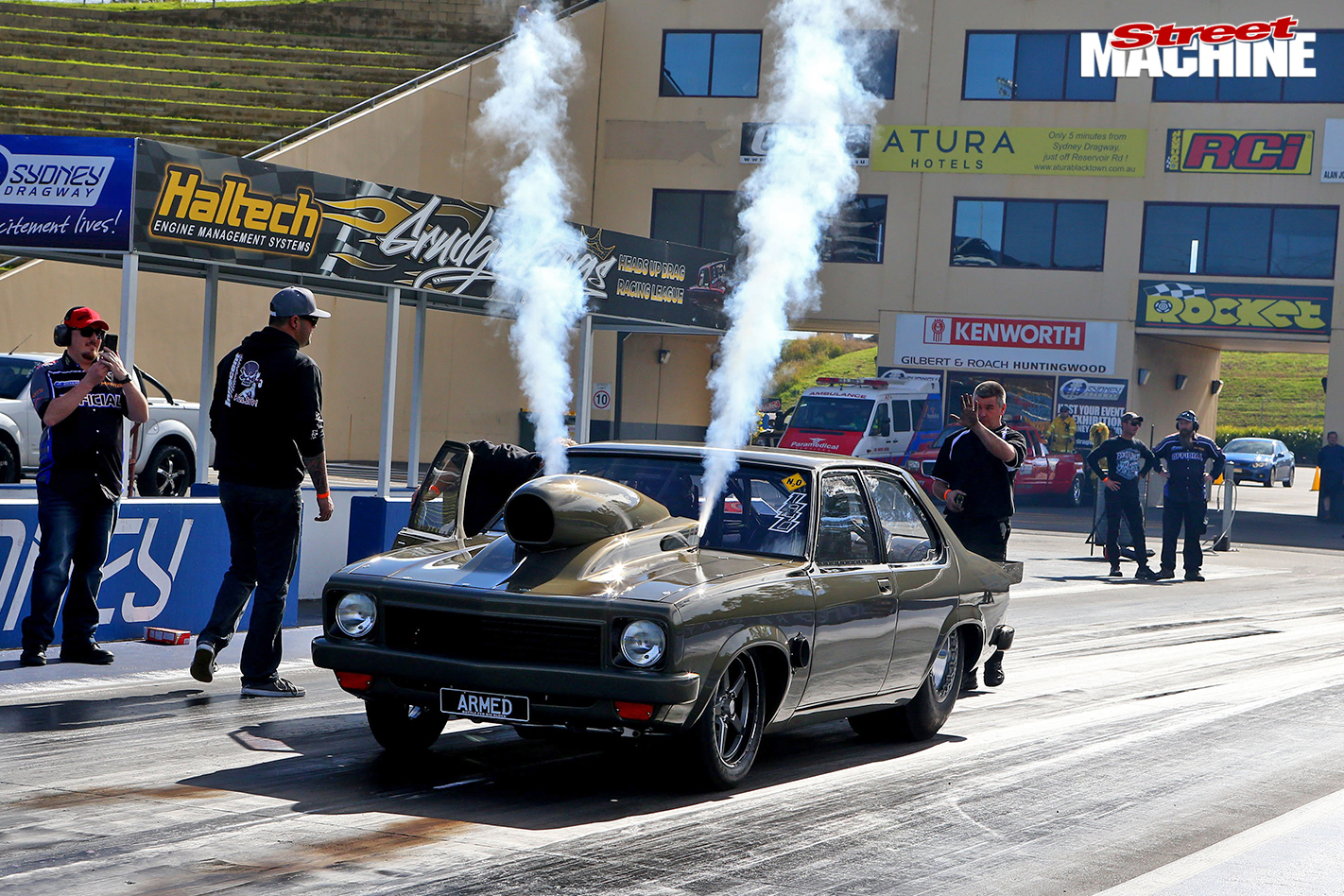 “The build went so well because I’ve had the best people around me. Between Krygs, Mark and Sam, I was laughing,” Heath concludes. “I want to run it in a lot of the Lights Out and Grudge Kings-style events, and I just can’t wait to run it at night – I want to see those flames!” 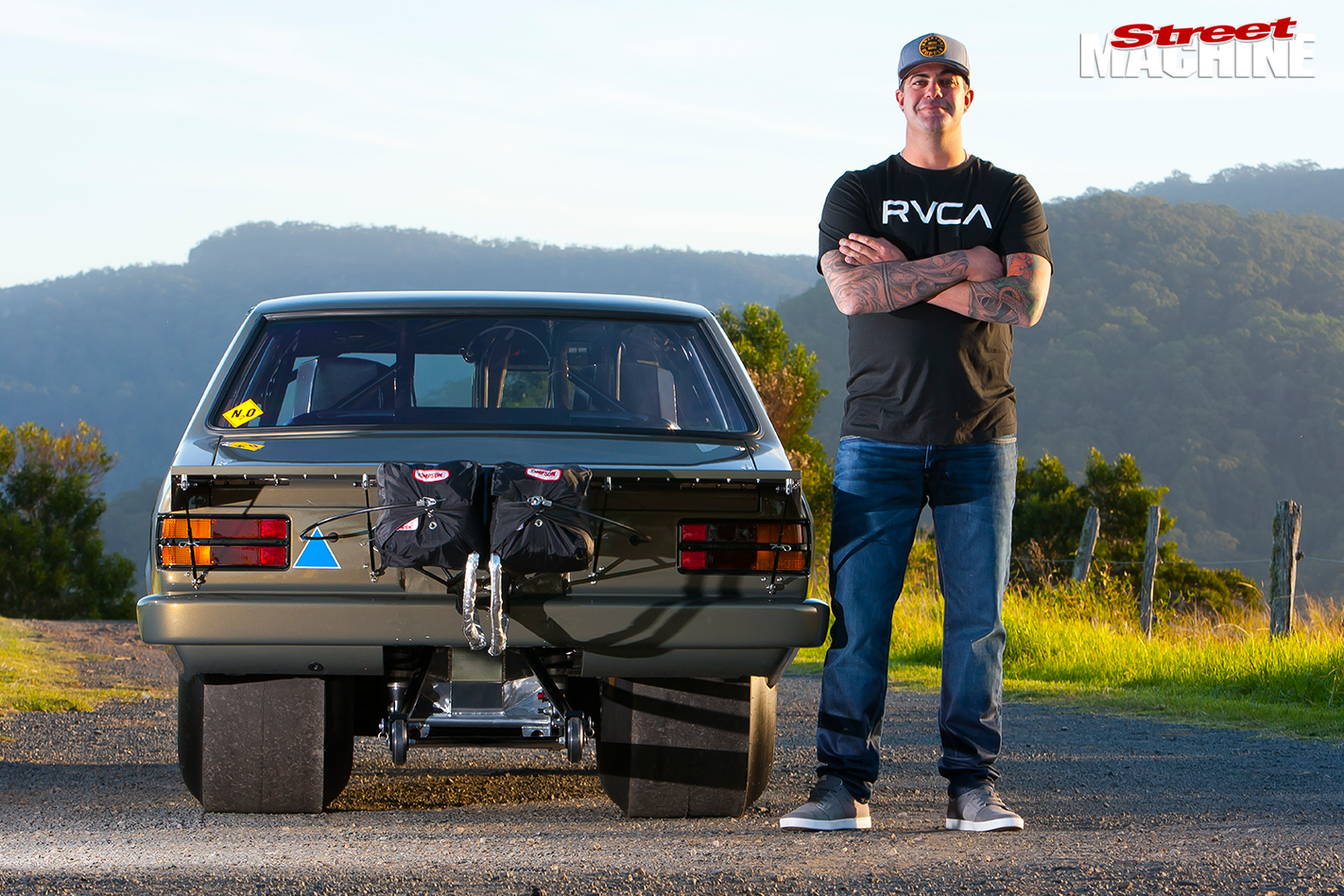