WHEN your ‘other car’ is a trophy-hauling blown XD Falcon that’s widely acknowledged as a mainstay of the Aussie burnout scene, you’ve really got to swing for the fences when the time comes to unveil your new project.

At MotorEx 2014, however, the punters and judges issued their unanimous verdict: John Taverna Jr and the boys from Taverna Brothers Engineering had delivered the goods. John’s insane blown and injected big-blocked FG G6E Falcon scored second Top Judged in the Pro Comp class on debut, with showgoers heaping praise on the car for its killer stance and tough looks.

FIRST up, let’s address the elephant in the room – the fact that the car runs a Chev engine. John’s blood runs blue, and while he would’ve ideally preferred to stick with a Blue Oval powerplant, practical considerations pushed him to a GM mill.

“You just about trip over big-block Chev parts on most street corners in Australia, but if I had’ve put a big-block Ford in her and needed parts while travelling the country, they would’ve been almost impossible to find,” he explains.

But that alone couldn’t convince him to build a Holden. As a dyed-in-the-wool Ford man, John took exception to the huge number of late-model Holden skid cars that had become so prominent in the scene. “A lot of people had done VE and VX Commodores, but no one had done a late-model Ford, and that’s why I set out to do one,” he says.

ASIDE from being Aussie burnout royalty, John also owns one of the most renowned chassis shops in the country, which makes him a busy bloke. That’s why the FG had to be built in record time – six weeks from go to whoa! According to John it was a fairly intensive process that was planned with military precision, and relied on plenty of people pitching in and doing their bit.

“Sometimes there were three or four of us on it until two in the morning,” he confirms. “My brother would be mounting the motor and ’box and doing the extractors while I was doing chassis work at the rear end, and someone else was prepping the bodywork for paint. Meanwhile the auto electrician was away making looms and preparing his bit. If I didn’t have a good team we never would have got it done in six weeks; it went right down to the wire.”

PERHAPS one of the most interesting aspects of the car is how much of it is still OEM spec. The trans tunnel and tailshaft tunnel are both completely stock, except for the very rear section. Everything fitted in there perfectly, despite the 3.5-inch tailshaft and twin four-inch ceramic-coated exhaust system. The floors are flat on either side of the tunnel and the fuel lines are hidden, run through cavities from the custom fuel cell to the engine. Not only does that keeps things neat but it also protects them from damage – both of which are requirements for a top-level burnout car.

Speaking of which, John noticed that most late-model burnout cars were junking their side skirts and rear bars on a regular basis, so he protected both with subtle fabricated steel guards. Three skids down and the rear bar and the skirts are yet to part company with the car.

“I didn’t want to be constantly painting it or replacing rear bars all the time,” John says. “Hopefully it’ll still look good after five years of skidding.”

TAVERNA Brothers Engineeing builds plenty of cars, but John’s a chassis guy above all else, and as such the engineering side of the project needed to speak volumes for the skills of his team. To say that the custom swing-arm rear end is a talking point is something of an understatement.

“We set out to do something fancy and to get the shocks into the boot, because with a burnout car the shocks always get trashed and covered in rubber,” John explains. “Corey Scholes drew up the diagram of how far it would swing and what the ride height would be; there was a fair bit of maths involved in figuring it all out. People always poke their head under the car for a look and end up scratching their heads when they can’t see the shocks. It really is a credit to Corey – he had a vision and I trusted his workmanship and allowed him to do whatever he wanted, and she handles like a dream.”

JOHN didn’t see any sense in removing the beautifully integrated factory shifter to fit a generic aftermarket item, as much as it would have been the easy solution. Instead, he worked to make the standard six-speed auto shifter work with the two-speed Powerglide ’box – no mean feat. After much grinding and fettling, the shifter works a treat.

Auto Meter gauges keep an eye on engine vitals, and are fitted to the standard dash in a custom fascia that has been vinyl-wrapped to tie in with the G6E’s factory carbonfibre appointments. The steering wheel is from Auto-Tek, and it too has been wrapped. The factory handbrake activates a fuel shut-off valve, so if things start to get a little too hot and heavy out on the pad, John just yanks on the handbrake to remove fuel from the fire.

THE final piece of the puzzle is the Chev that we alluded to earlier, a 547ci big-block topped with a 12/71 Littlefield blower and fuelled by a Big & Ugly hat. It runs Bowtie heads and a rotating assembly comprising a Callies crank, Oliver rods and JE slugs. Handy for 1350hp at 6200rpm, the Powerglide-backed monster mill has already proven capable of a stonking skid on numerous occasions.

“It drives absolutely beautifully, and it pulls up on a dime,” John says. “I’d never driven an FG before I built this one, but these late-model cars really are great. The suspension is perfect; it does exactly what I want it to do, with zero body roll.

“The number-one goal was to show people that we can build a decent car. To get a trophy at MotorEx was unbelievable.

“But without my family backing me, these things wouldn’t happen. My wife’s name and my two boys’ names are on the hat, because without their support – with these big hours spent on the car – we wouldn’t have got there. Family is very important.” 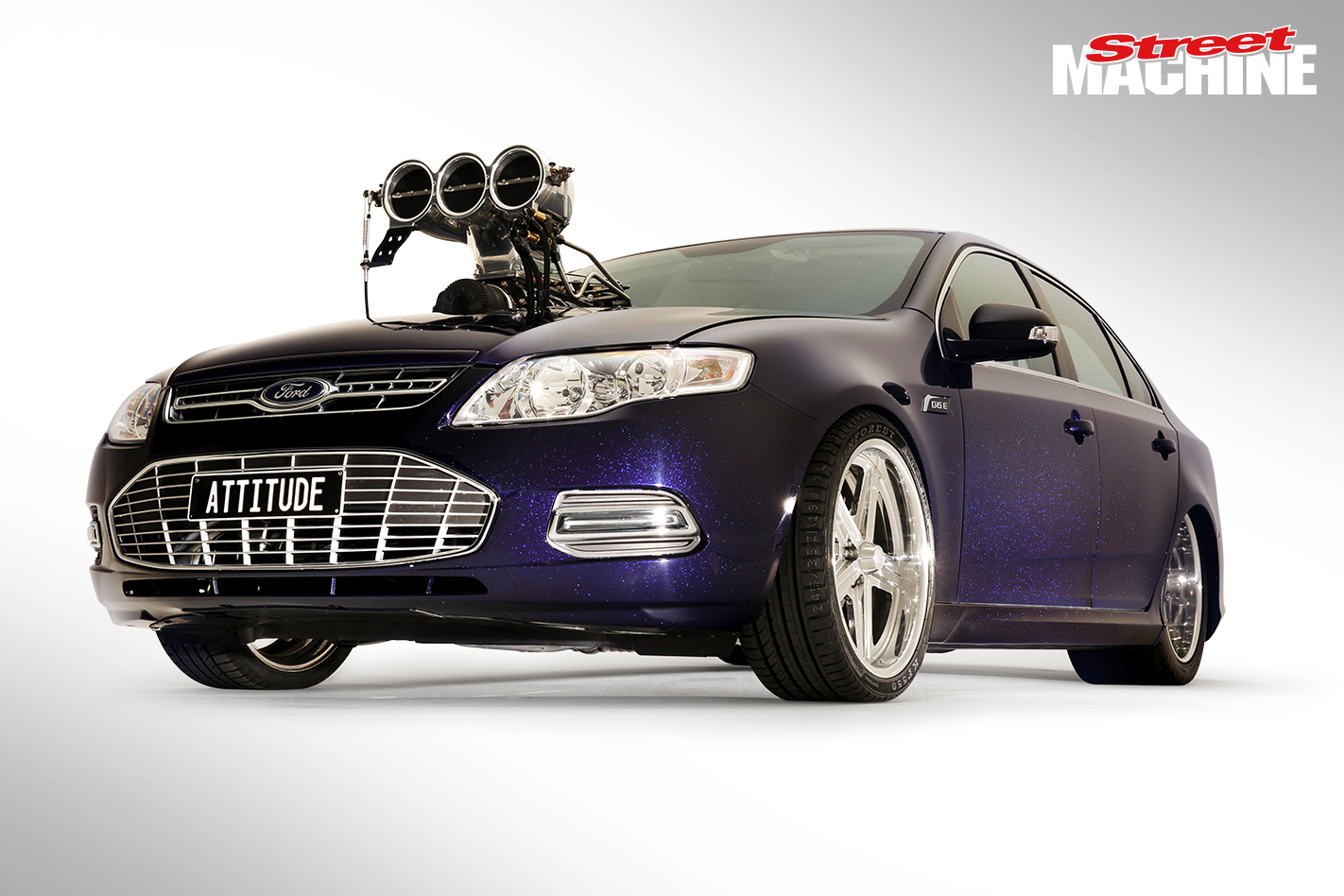 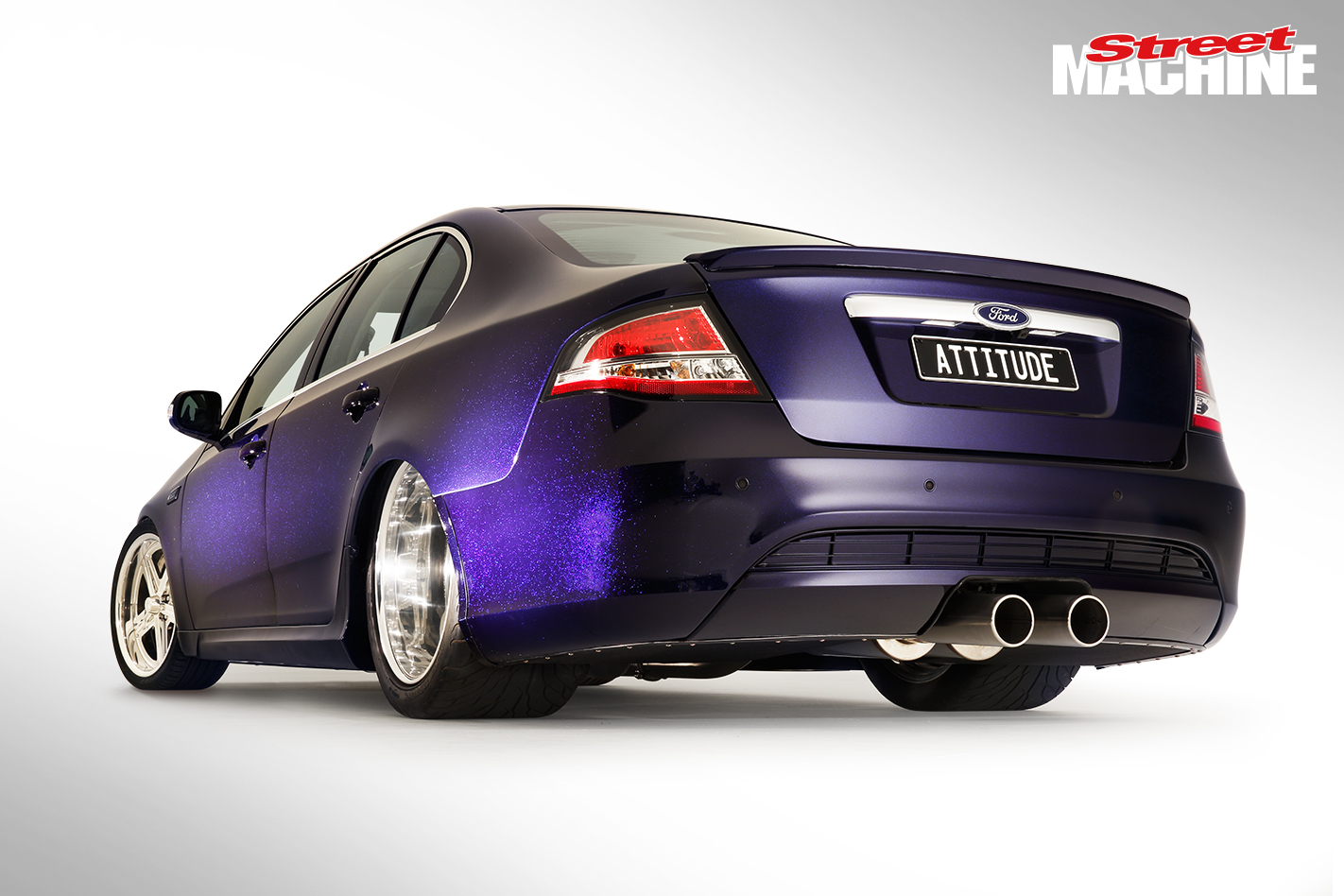 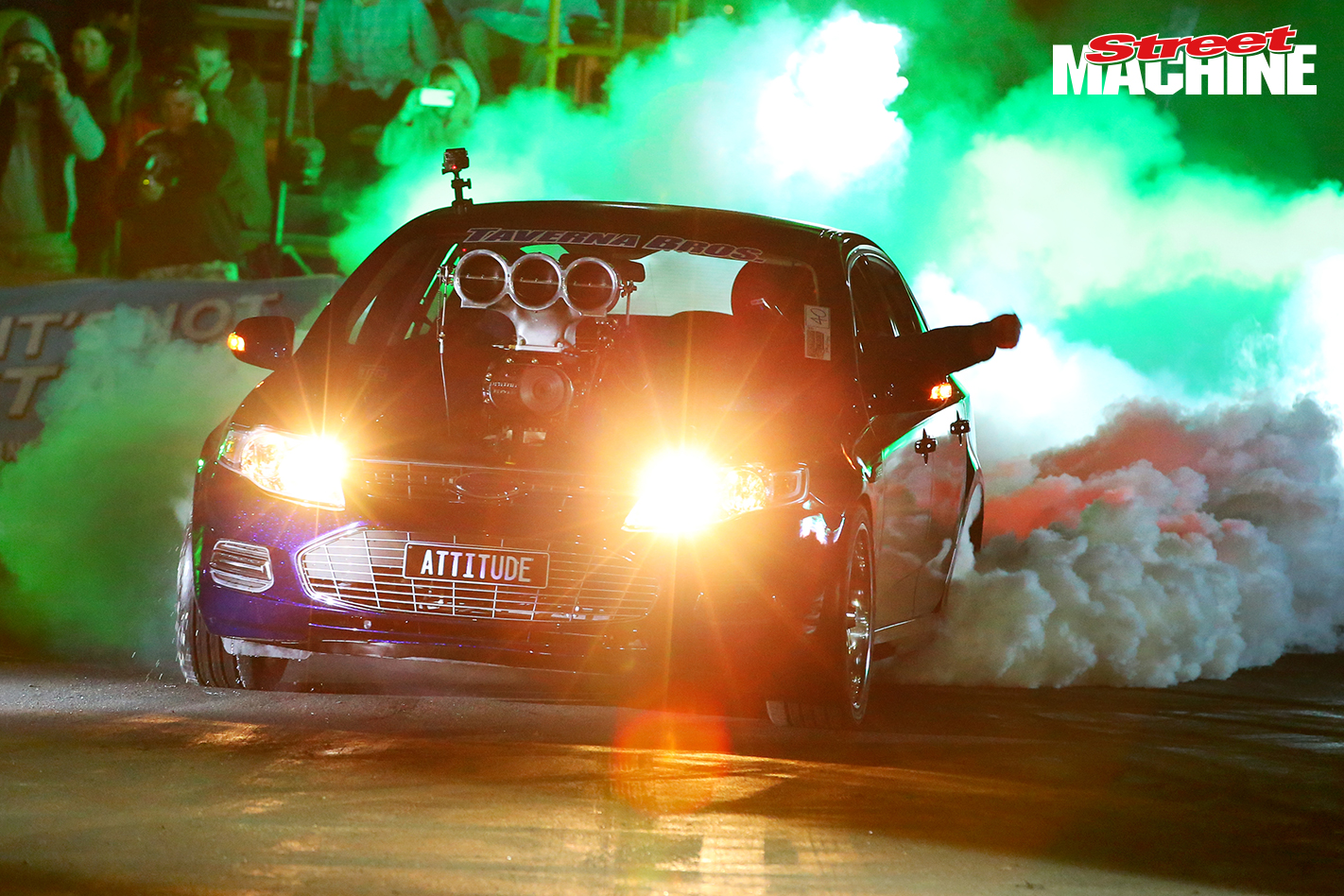 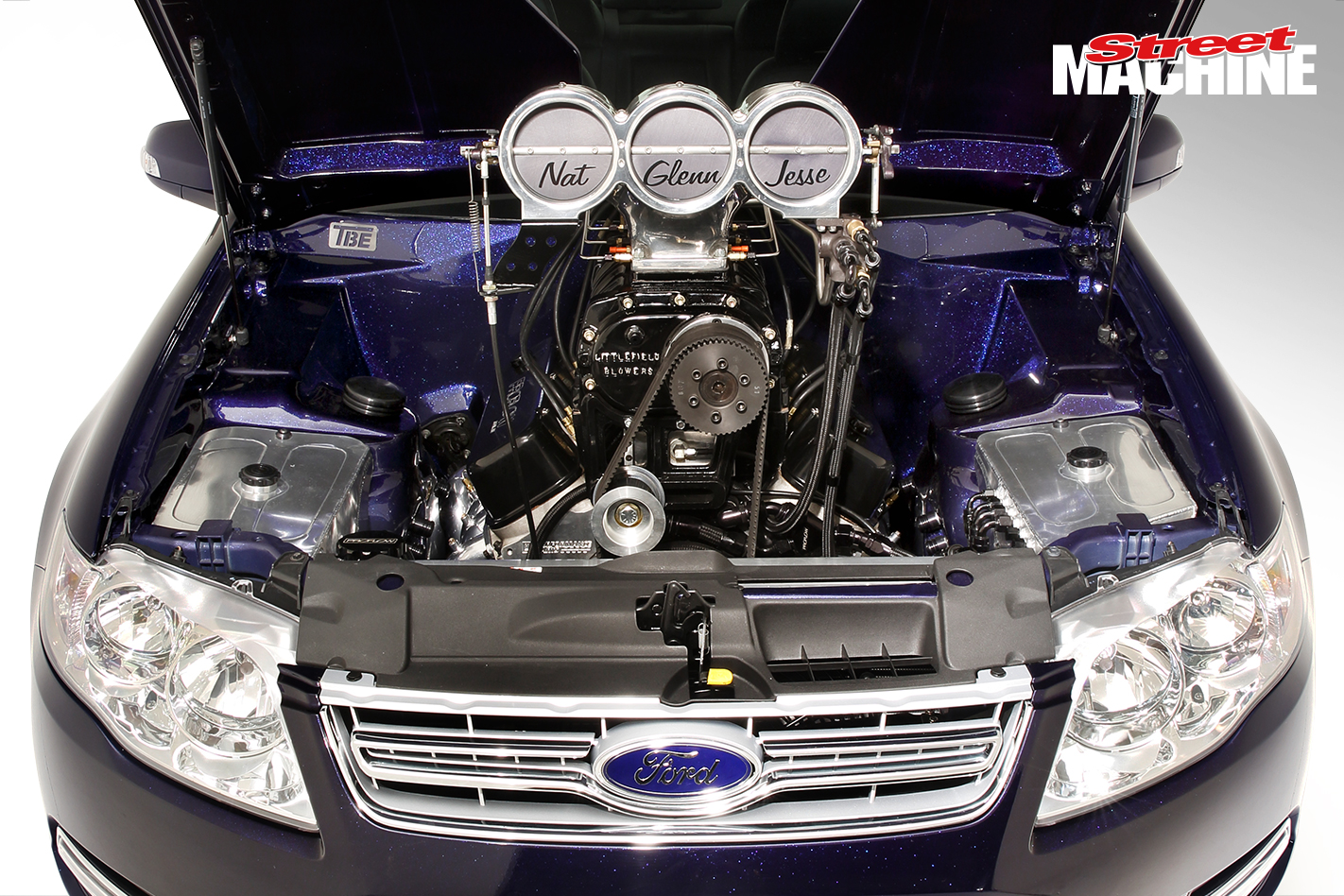 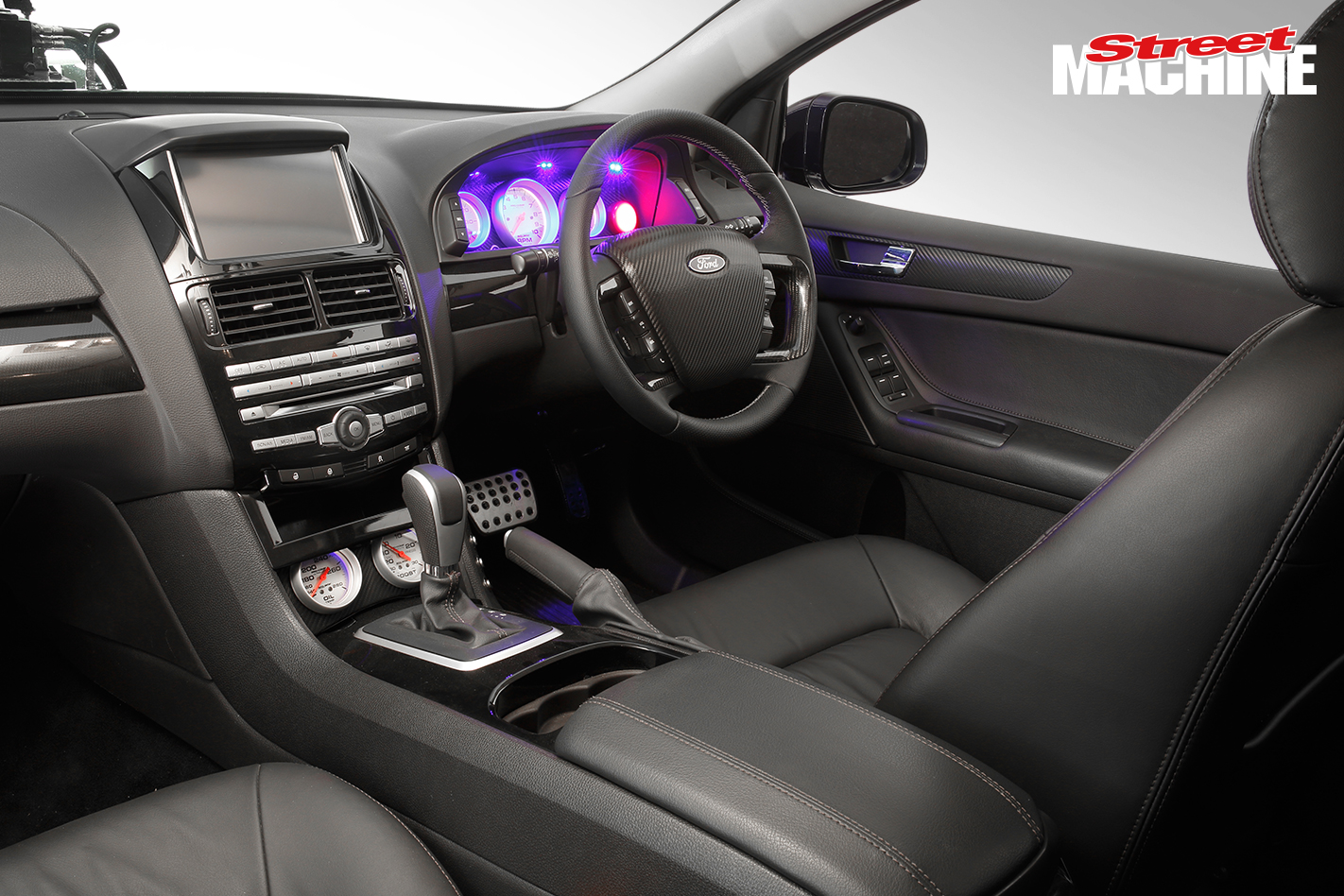