Looking back on the radical rebirth of Billy Shelton's wild Sicko HQ Monaro halfway through the build...

THERE’S a good story here!” chuckles a bright and breezy Billy Shelton, owner of this in-the-build HQ Monaro. “It’s about how quickly you can go from the penthouse to the shithouse!”  Billy might be happy enough now, but the tale he tells is one of punch-someone-in-the-face anguish and disappointment. 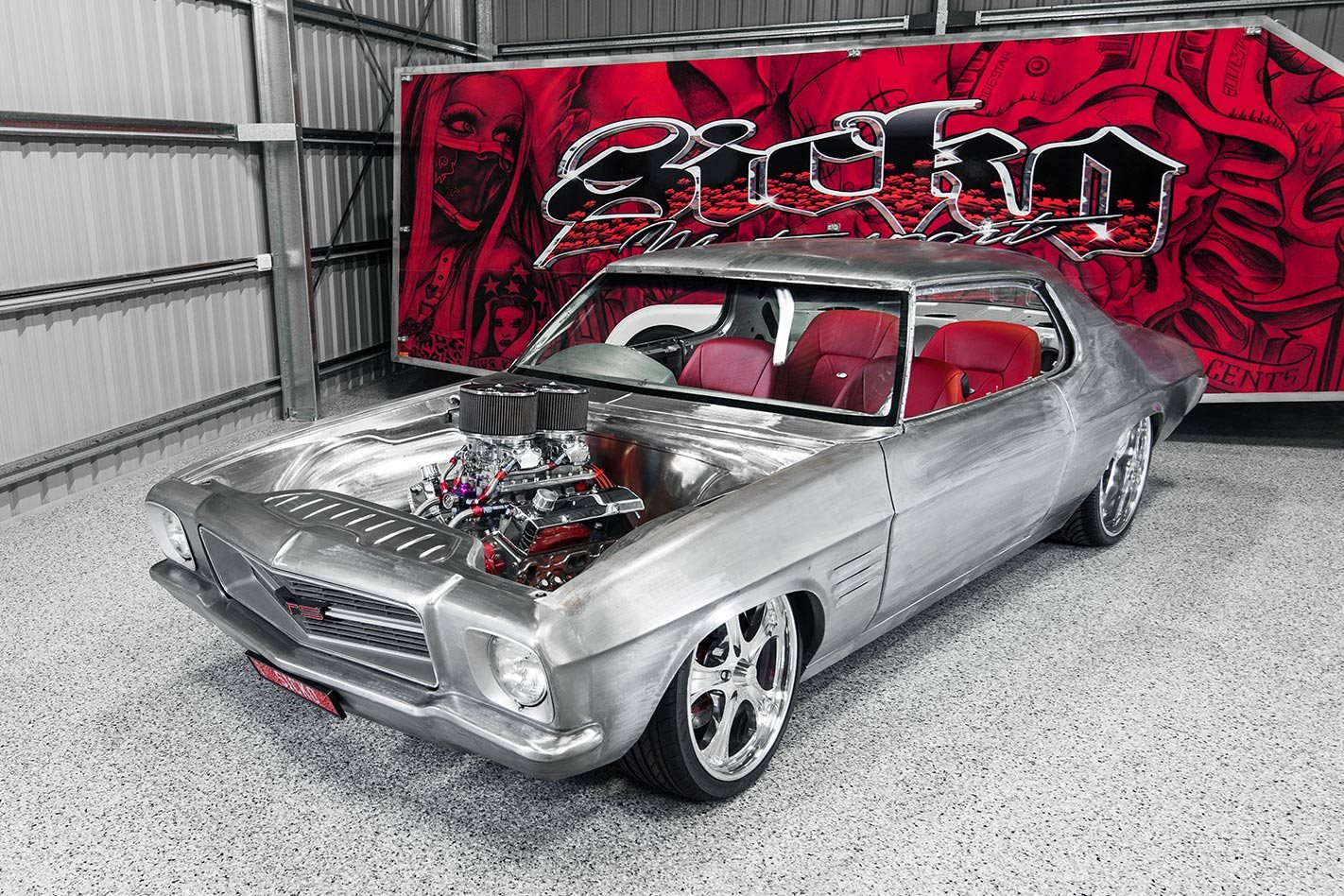 Almost a decade ago, Billy’s SICKO Monaro scored the November 2007 cover of SM, and raked in literally hundreds of trophies, including a couple of MotorEx Superstar invites and a spot in the Street Machine Summernats Top 20. It’s a car he’s owned since he wasn’t far out of high school. “I’ve owned it for 22 years,” he says. “I bought this when I was a young fella because I loved the shape of them; it was my dream car and you can’t beat that.” 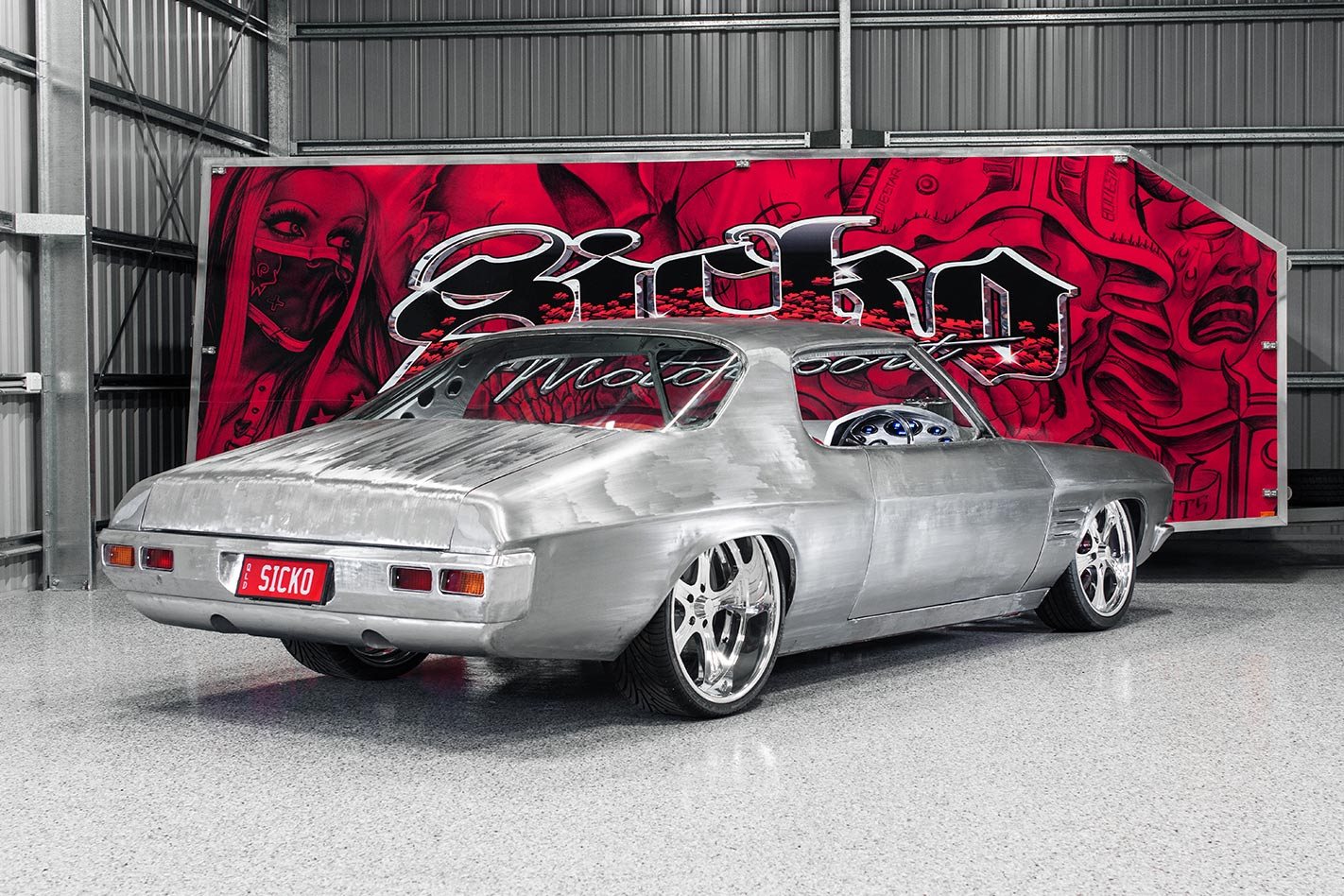 But Billy decided he wanted his Monaro made more show-worthy with tubs and a flat firewall. But as he tells it, the workshop he commissioned to do the work didn’t – let’s say this tactfully – quite meet his expectations. “The rear quarters – the whole arse-end – had dropped because they hadn’t provided any bracing,” he explains. 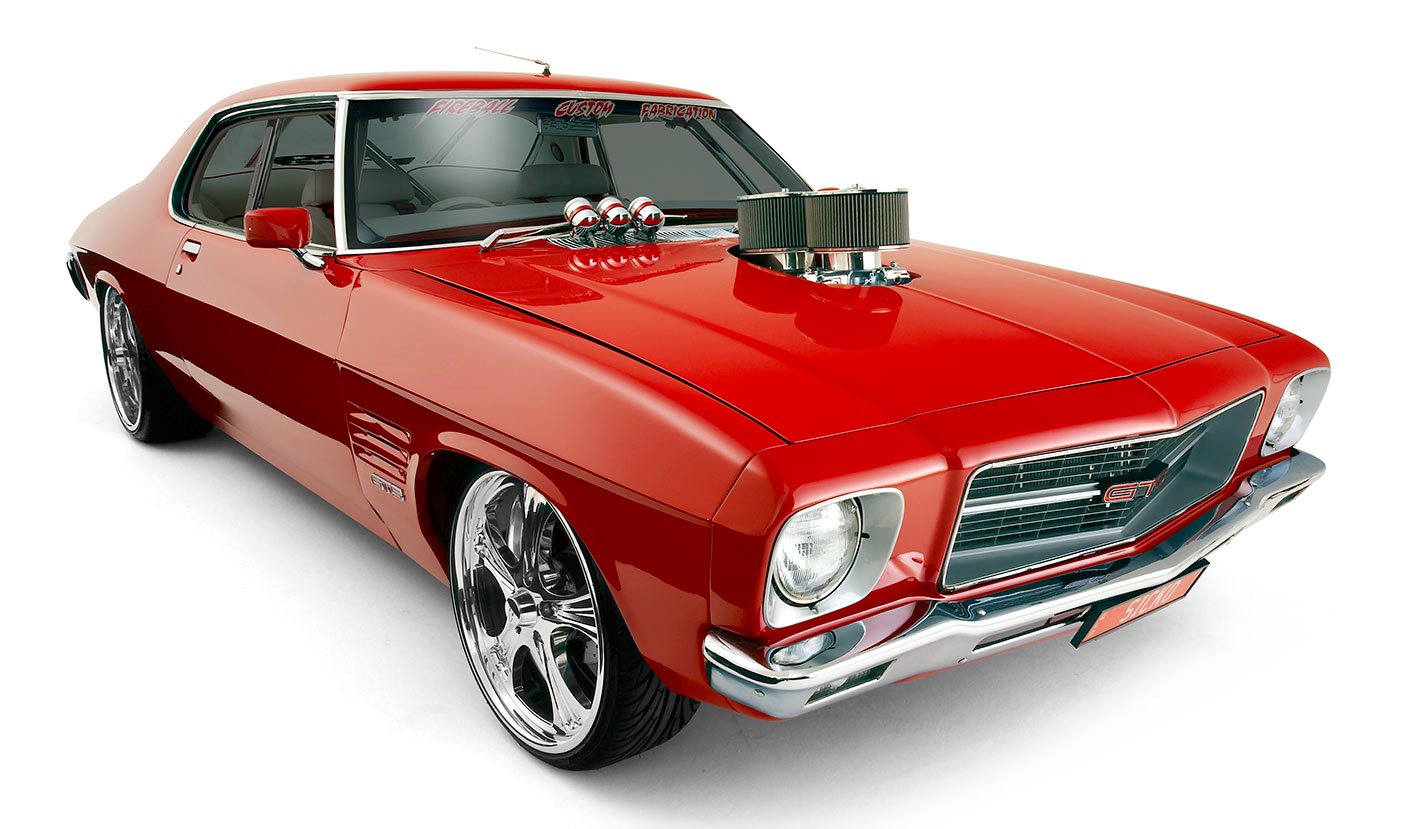 SICKO was no shrinking violet in its first incarnation, and made the cover of SM back in November 2007. Back then it was bright, blinking red, with contrasting white trim

“It got murdered,” reckons Rod Collis, the bloke who took on the job of fixing the show-car-turned-wreck after a mention from Summernats chief judge Owen Webb. “Billy took it home and I think it sat there in the corner while he decided what to do. “Anyhow, he brought it down and we did the firewall. Then he was like: ‘Yep, yep, that’s great!’ and wanted to know how long would it take to do this and that.” With the car’s problems behind him, Billy discussed a thorough revamp of the Monaro with Rod, who trades as Rodz Kustomz in Queensland. 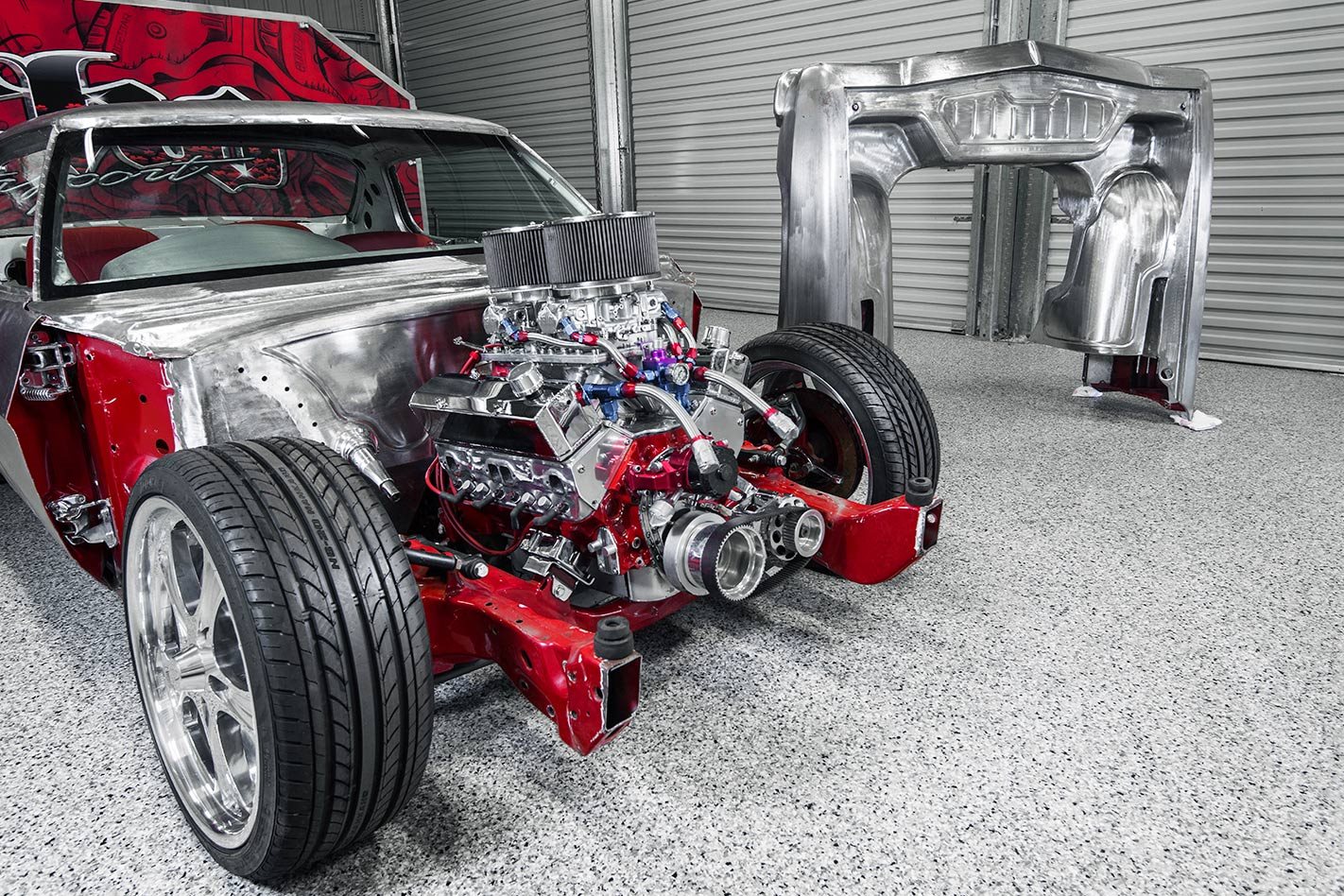 “We specialise in custom fabrication – sheet metal, chassis, suspension, all that kind of stuff,” Rod says. “We don’t do final finishing or paint; we get it to a stage where the cars go off and get finished and painted somewhere else. Then, if the customer wants it, we can finish-assemble.

“Anyhow, Billy asked us about getting rid of the cowl vents in front of the windscreen,” Rod continues. “We began sanding and we started finding bits of rust under the paint. So section by section, we ended up stripping the whole thing back to metal. In hindsight, we should have media-blasted everything – that’s what we normally do – but this one began as just a firewall. It was never going to be this big!” 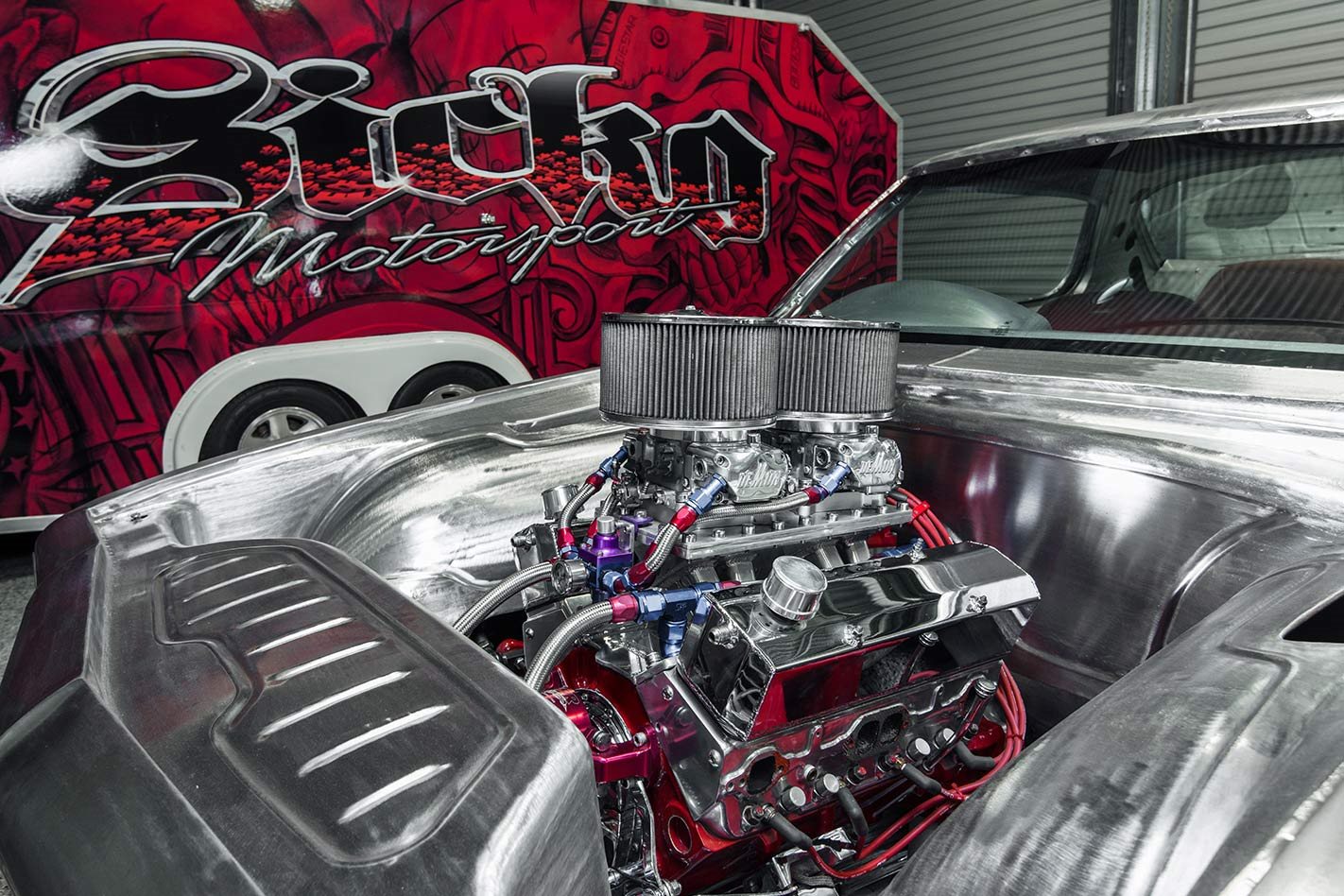 ‘Big’ means almost every aspect of this car has been tweaked, but it still maintains the identity and character of the Monaro. The extensive mods include: removable front clip – including the inner guards, radiator and thermo fans; door sills extended under the front guards; shaved door handles; front bumpers filled and both bumpers welded to the body; smoothed cowl vents; and an extensively reworked dash and instrument binnacle.

All up, Rod had the car for two years. “We tried to keep the shapes and the same theme all through the car,” he says of the sheet-metal work, fore, aft and through the classic Monaro. “Sometimes, you’ll see a car and in the 12 months it’s taken to do the work they’ve put a different bloke on [the job] who has a different style. 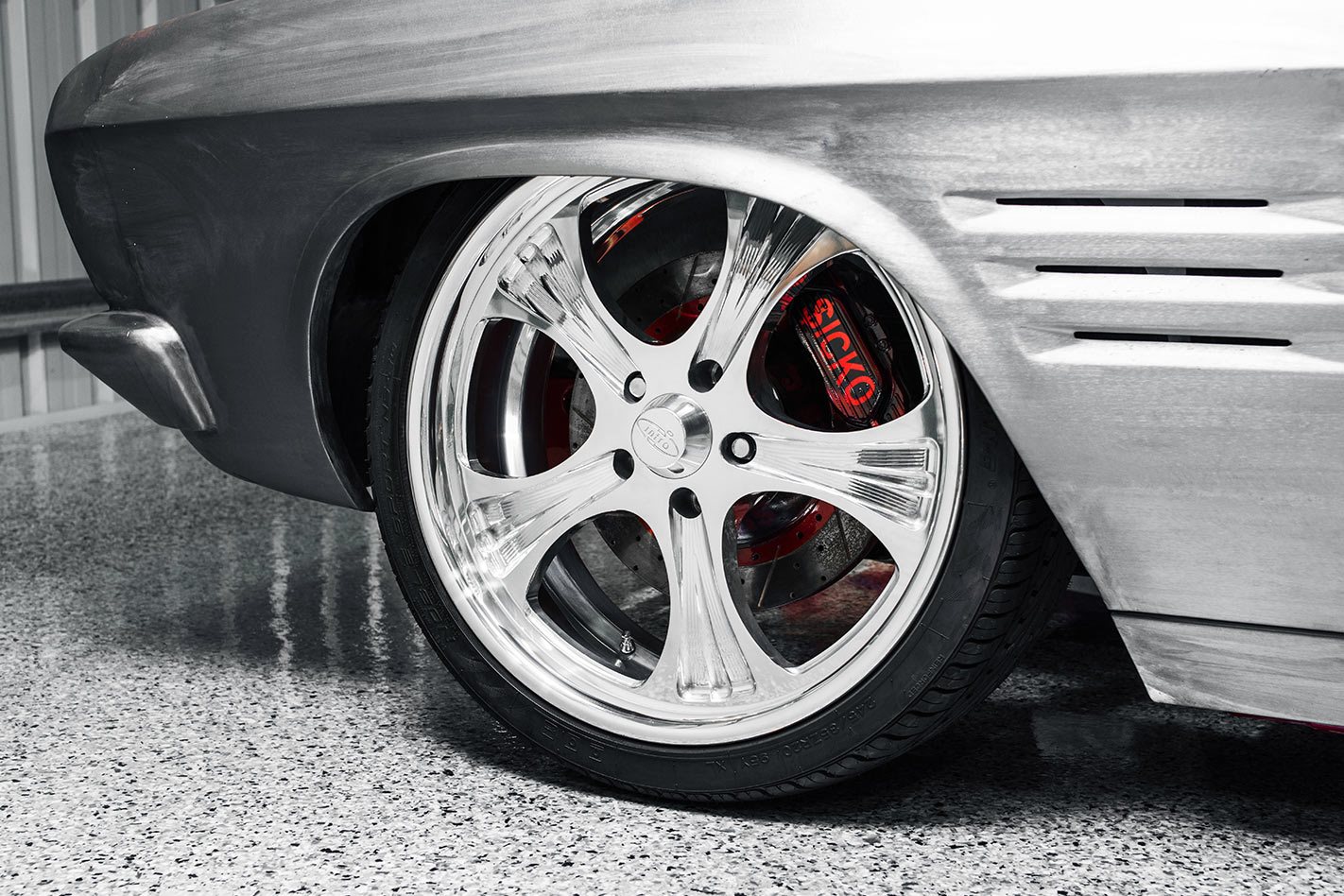 “You gotta keep the pattern going through a car – that’s for sure!”

Helping the continuity was the fact that Rod had a free reign with the sculpture.

“I had a picture in my head of how I wanted it done,” Billy says. “But what I wanted done and what can be done are sometimes two different things. But it was clear to me early on that we were on the same wavelength, you know? Rod would ring me up and say: ‘Come and have a look at this,’ and I’d go down there nervous, thinking: ‘What’s he done?’ “To be honest, it took a while for me to trust him after being burned, but his work is outstanding. He’s a perfectionist; the god of steel. Not only have we created this car, but I reckon we’ve created a good friendship, too.” 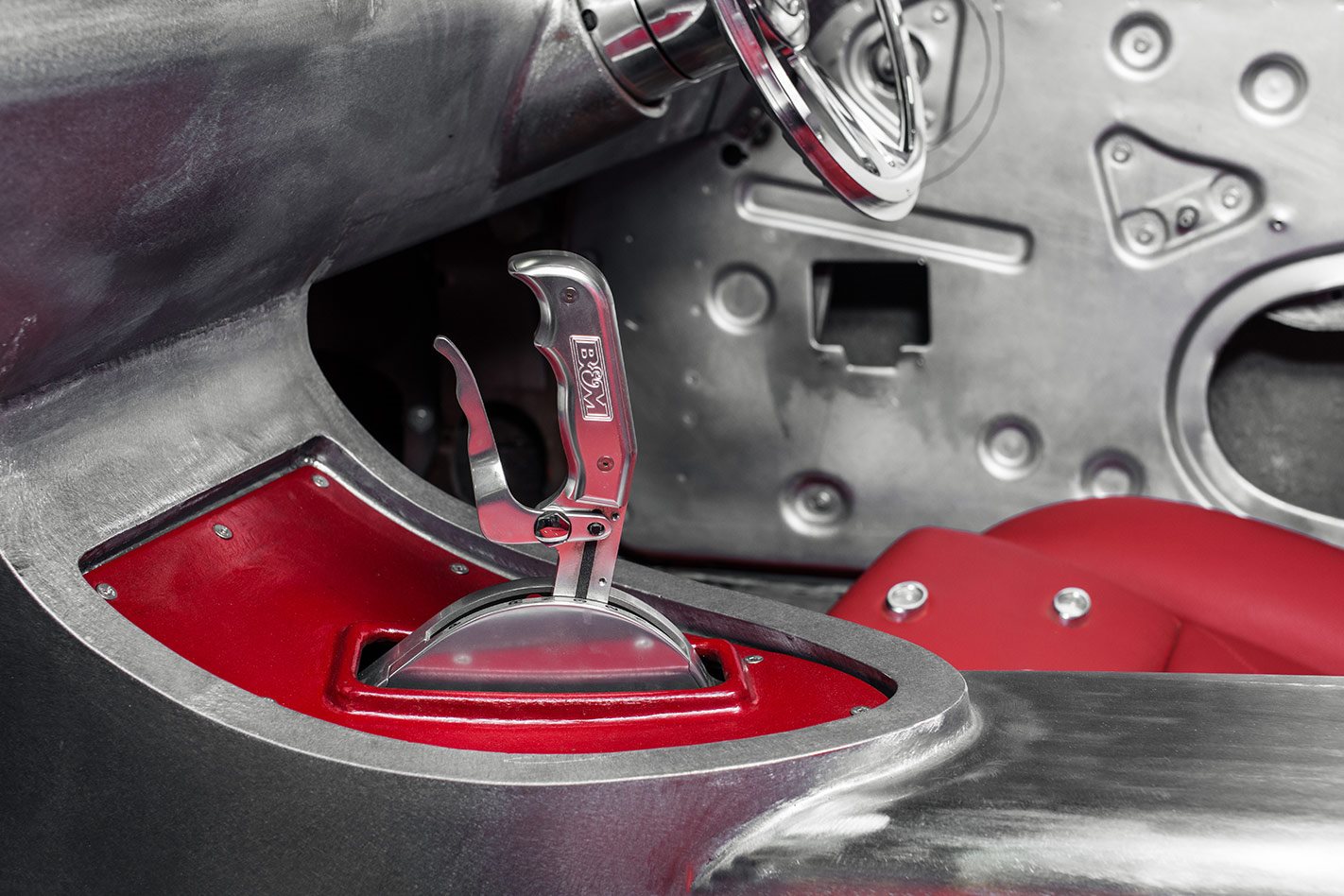 Rod confirms the happy bromance. “He let me go and said: ‘Make it look good,’” he says. “Some clients know every detail, to the millimetre, of how they want things to look. I’m working with a client from China right now who’s like that.

“Others have a general idea, a general theme and are willing to let you run with that. We would catch up every once in a while and discuss things.” 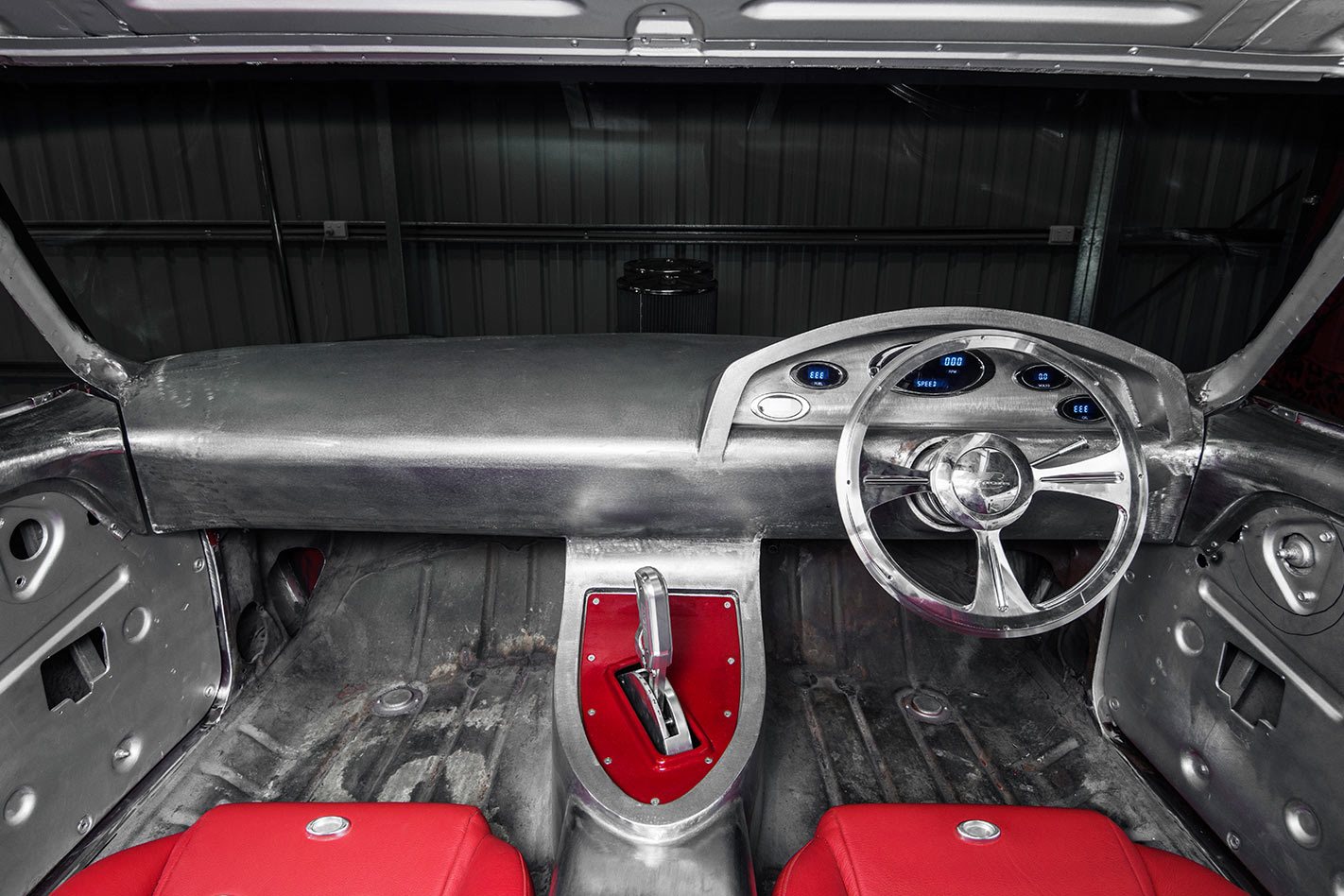 Mechanically, the car is a work in progress. It currently runs the same driveline that it did back when we featured it in 2007 – a 350 Chev with plenty of gear, a Turbo 400 with manual valvebody, while out back there’s a nine-inch diff with a spool and 31-splines axles. But, as Billy says, “that motor’s not staying in there”.

So what will we see when the car is complete? 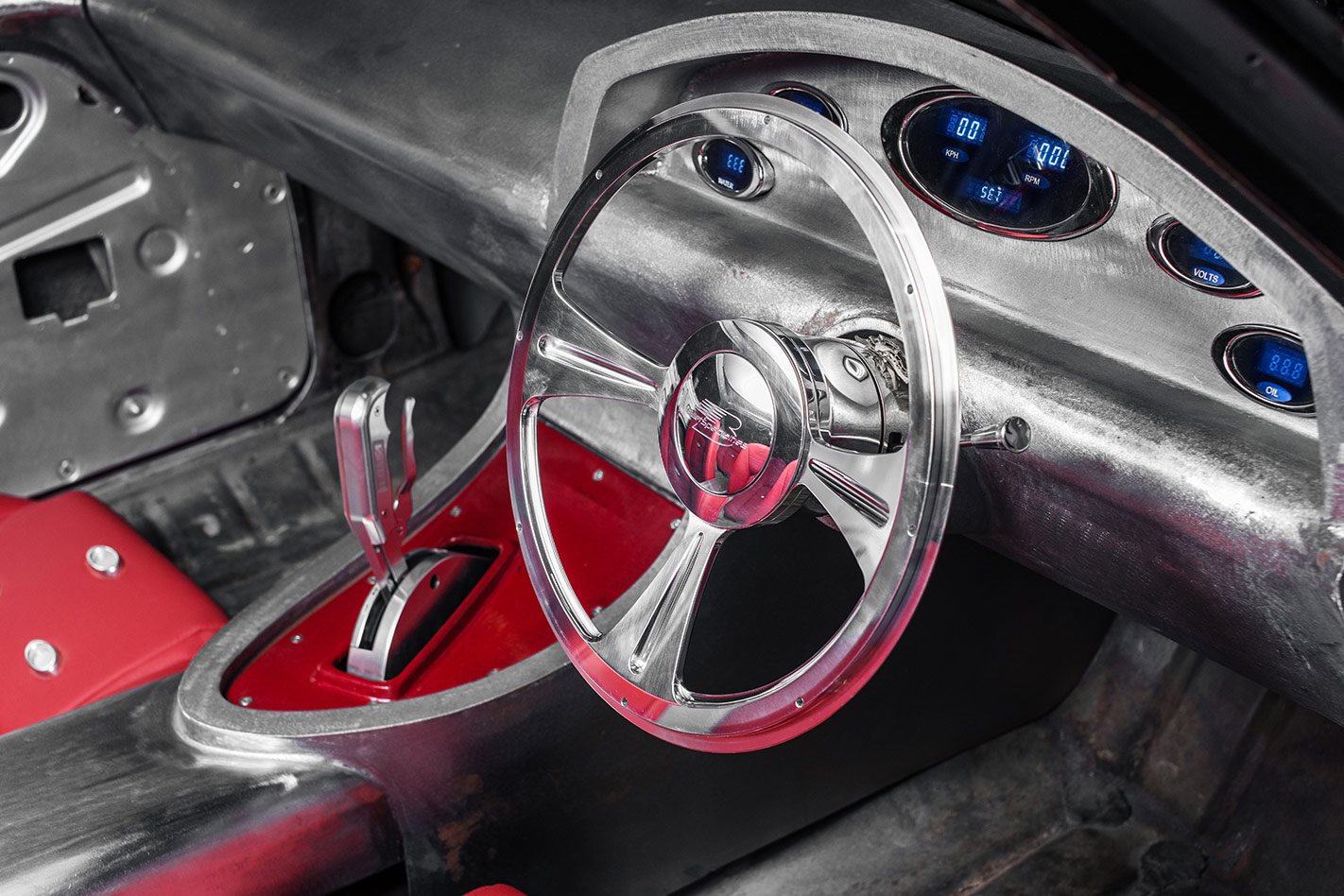 “It’s going to have a motor in it that will slap you in the face when you walk past!” he says with a chuckle. “We’re keeping it under wraps for the moment, but it’ll be roof-height!” The intention is to show the car for a year, then turn it into a streeter. “At the end of the day, I want to be able to drive it,” Billy says. “The plan is to unveil it at MotorEx next year and then take it to Summernats, have a go at Grand Champion. Once I’ve finished showing it I’ll take the top half of the motor off so it’s not as high as the roof!

“I’m building the car for myself,” he continues. “Not for the judges, not for Meguiar’s, not for magazines and not for anyone else. Yes, I know what the judges look for, but this is for me.” 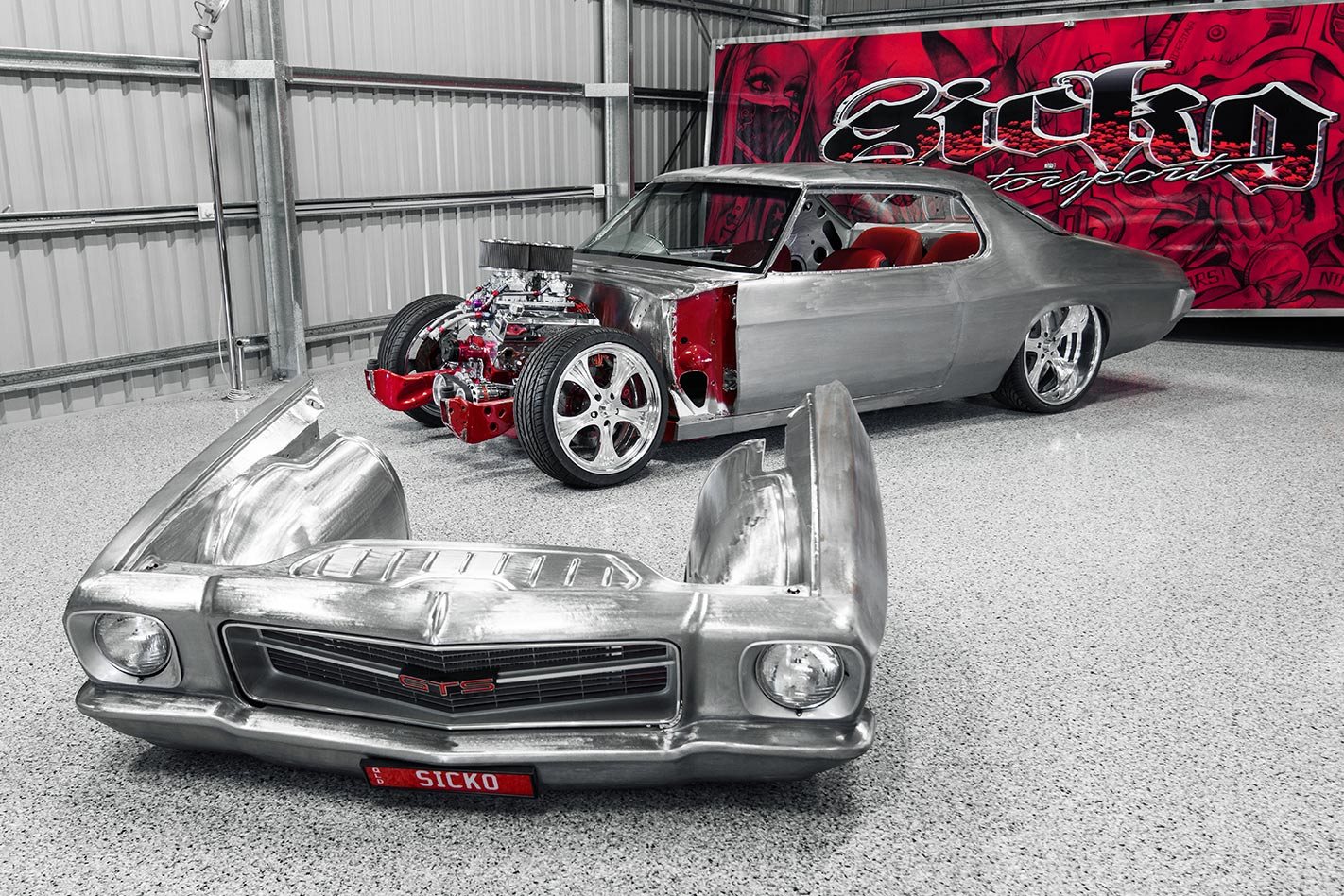 1. The complete front clip lifts off, taking with it the radiator and thermo fans. Achieving this was a mammoth task, with the old tradies’ mantra of ‘measure twice, cut once’ being critical. As Rod explains: “You need to line up the guards and the grille panel and the bumper; once it’s welded together – and the bumper is welded on, too – nothing is moving, ever again!” Extending the Monaro’s sills from under the doors to under the front guards achieves several things: It visually lowers and lengthens the car by reducing the slab-sided appearance of the HQ’s front guards, and it makes alignment (and removal/replacement) of the lift-off front a little easier, too. A quick-release wiring harness will help too. 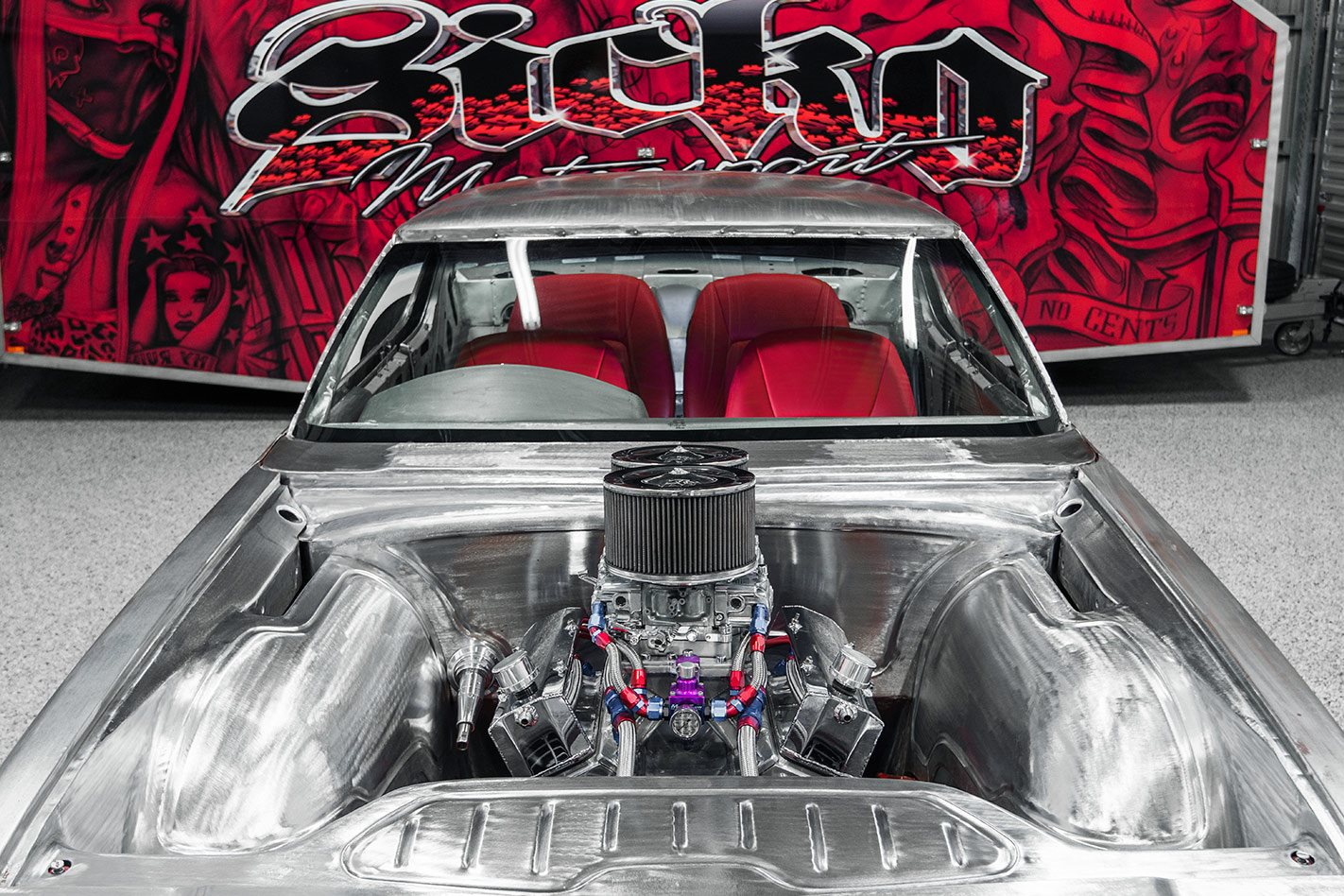 2. What started out as a flat firewall, developed into a total makeover. Every curve and surface of the reborn engine bay looks just right, with the strakes on the radiator infill panel complementing the curve of the nose panel and front guards. Few styling efforts outside of a car makers’ computer-equipped design studio get things right from every angle. Yep, the boys have nailed it! 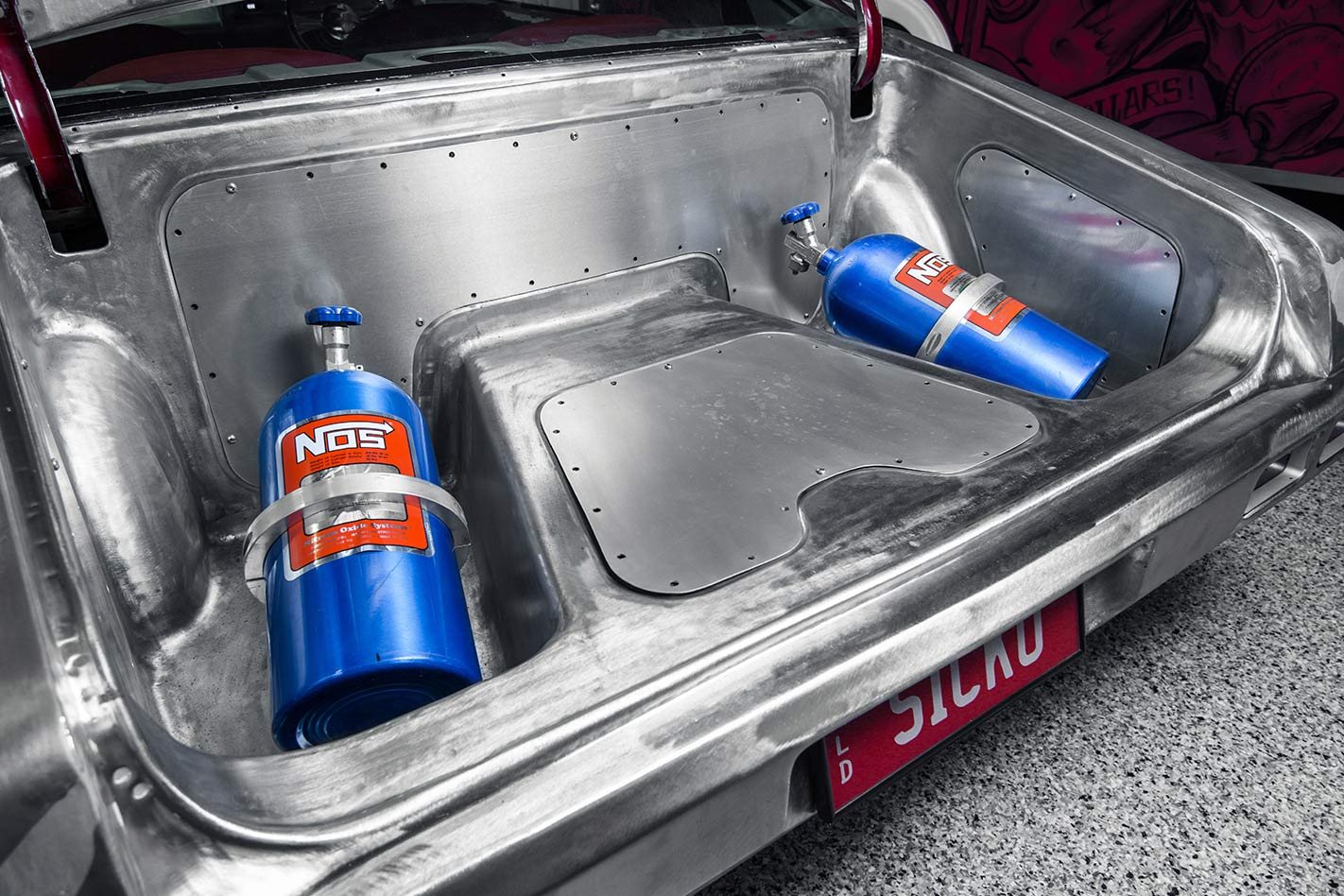 3. The nitrous bottles are in fact reservoirs for the airbag suspension system, which will allow Billy to lay the Monaro low at shows while retaining sensible street driveability. Like the engine bay, all the sculptures are reflective of the Monaro’s curves; there’s not a fussy line or awkward detail to be seen. It’s almost a shame to cover it in paint – and will definitely be a shame to shut the boot lid, but Billy wants a wow factor to be there when things get opened up. 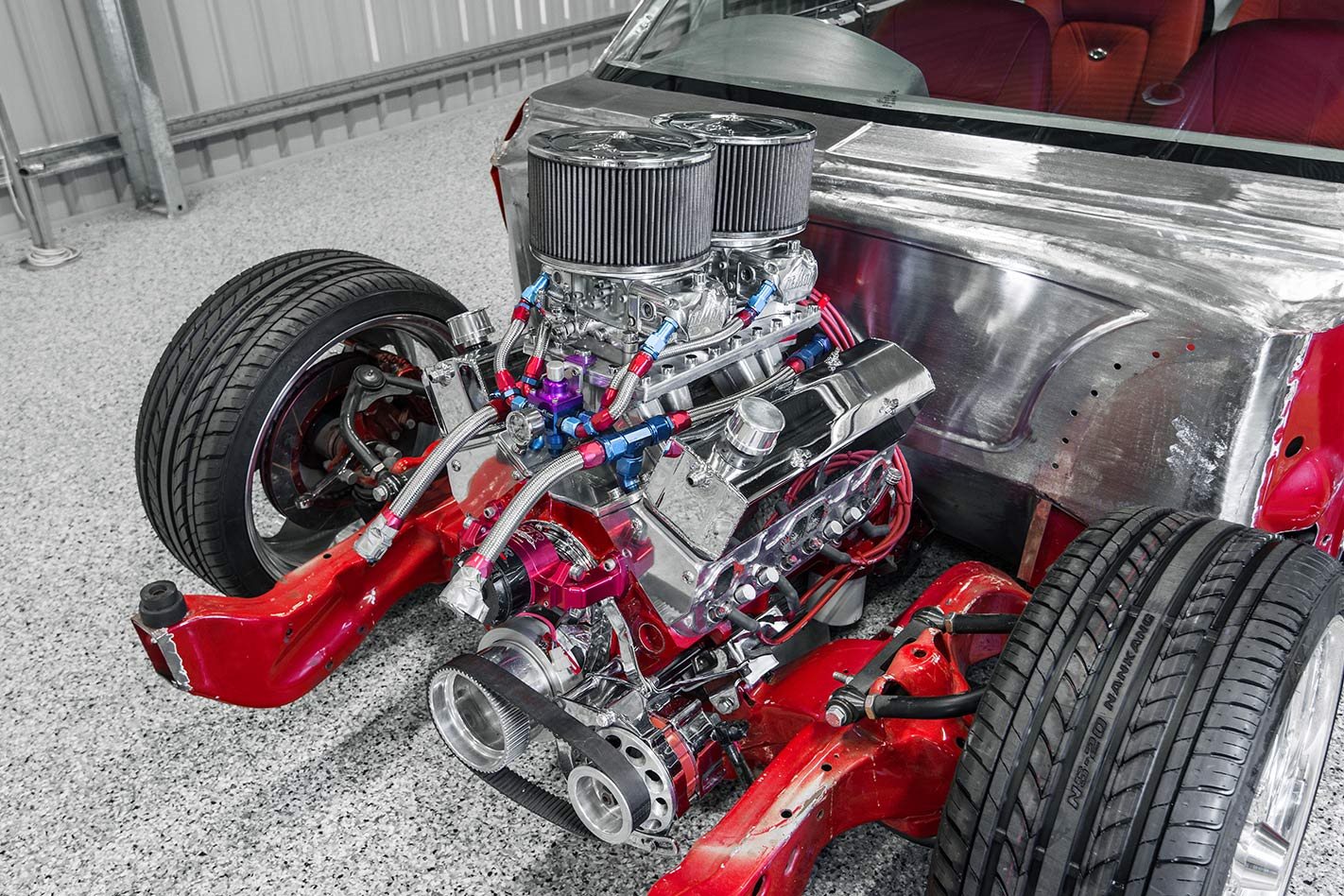 4. Billy doesn’t know what’s going to replace the Gerry Cooper-built, avgas-sucking 640hp small-block that is currently sitting in the HQ, but he reckons it’s going to be an eye-popper! The front end remains HQ, but modernised with McDonald Brothers tubular A-arms, a power rack-and-pinion set-up and some monster stoppers. 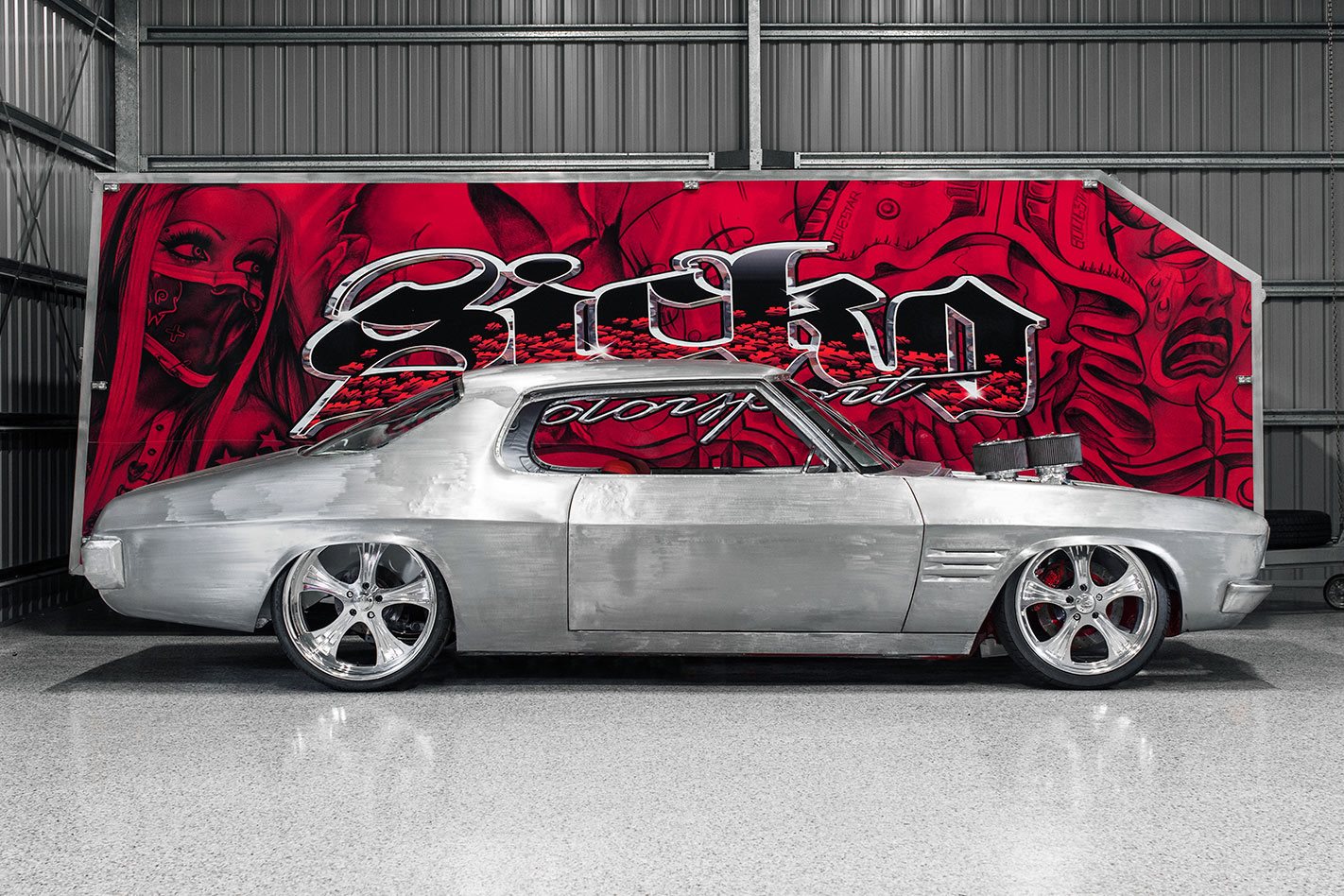 5. There’s a long list of metal mods here: Shaved door handles, filled front bumpers (both bumpers are tucked and fixed to the body) and smoothed cowl vents. Plus there’s the stuff you can’t see: Smoothed under-boot tank area with bespoke exhaust outlets, and the front apron extended under the engine bay. The car is now being final-finished by Paul Butler in Redcliffe, Queensland, ready for its intended debut at MotorEx in mid-2016. Watch this space! 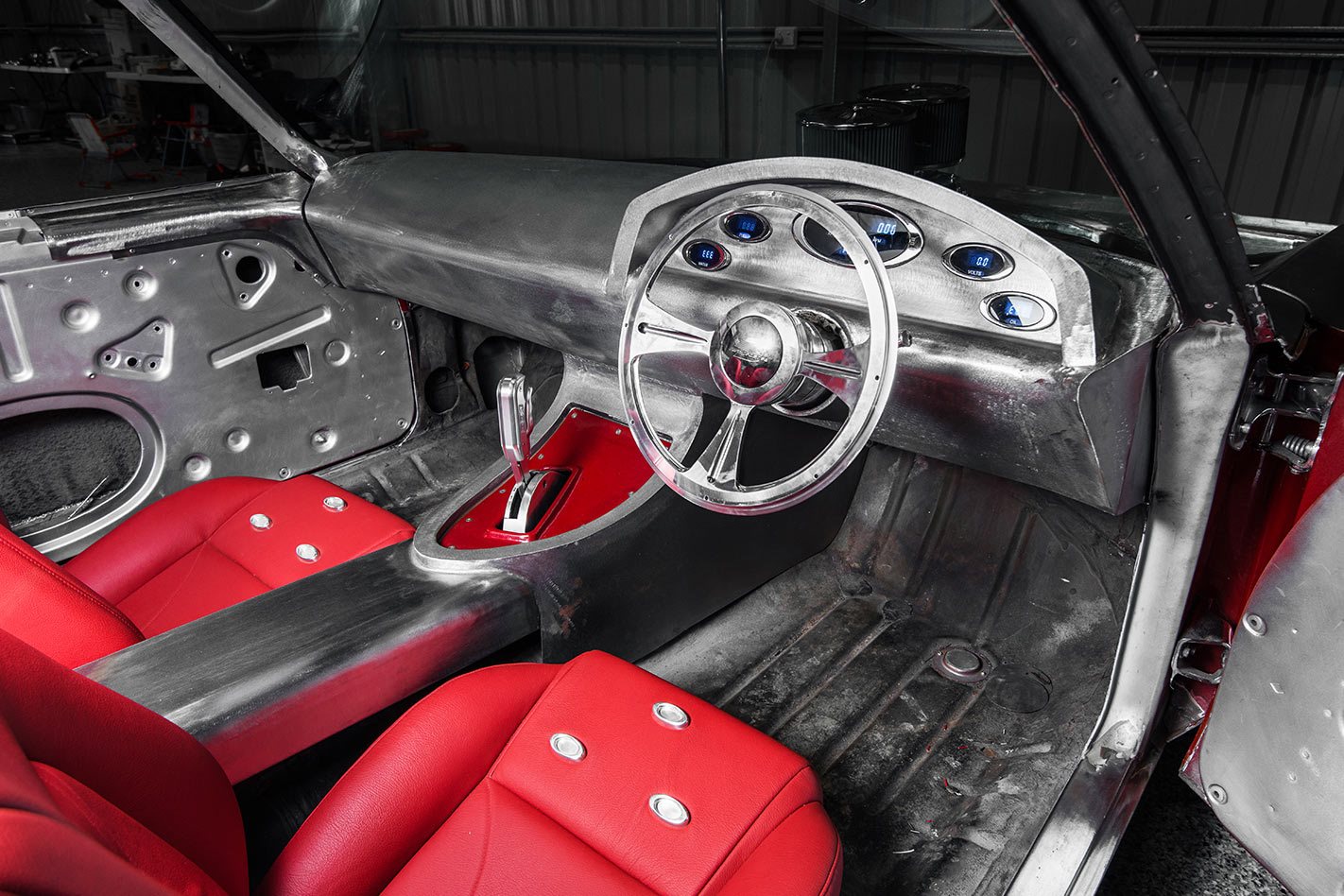 6. From the factory, the HQ’s high and bluff dashboard never quite complemented the car’s dainty and well-detailed exterior surfacing and style. Rod and Billy’s efforts, with a lower dash top and separate binnacle housing Dakota digital instruments, fix that. The dash profile continues around into the doors. The angled shifter is a neat touch. 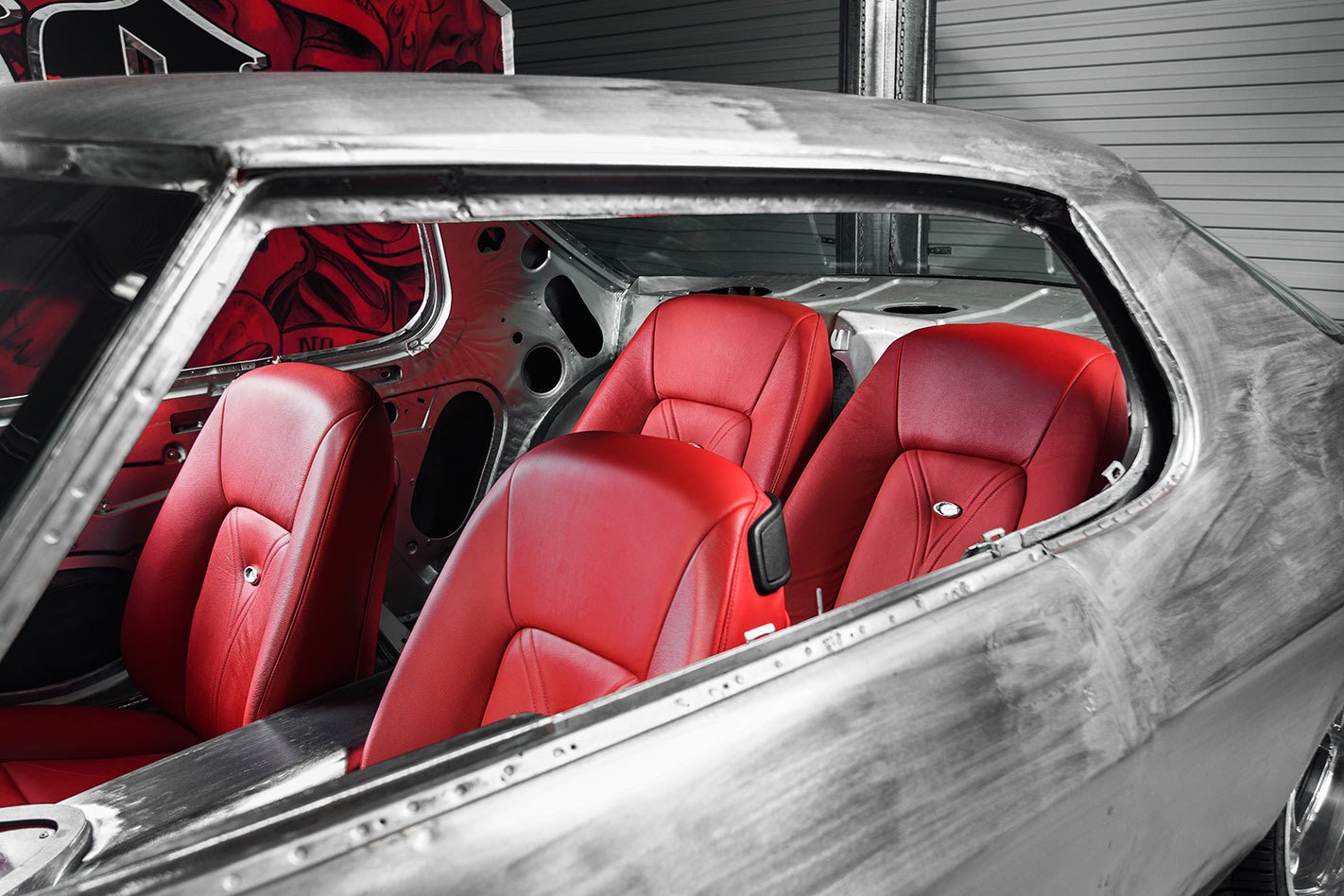 7. The seats are a hint of what’s to come. It will be a four-seater, so Billy can take his family – wife Michelle, four-year-old Chase and two-year-old Chloe – cruising after the car’s show days are over. The trim work will be done by Rides By Kam. 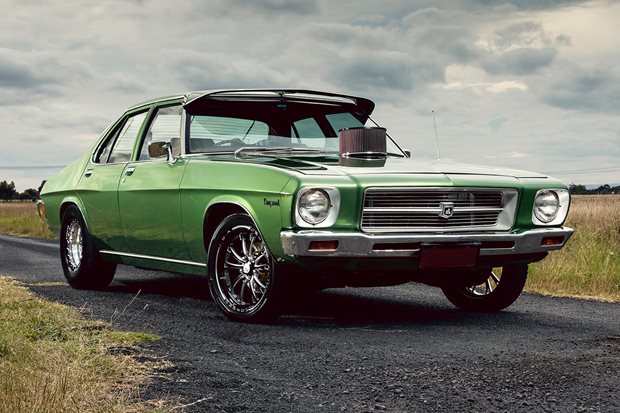