It might seem hard to believe, but this drop-dead stunning FJ Holden pano is Josh Nijam’s first ever rebuild. Even more difficult to comprehend is the catalyst for the build. Back in 2004, Josh was running a mechanical workshop in Nigeria when he was shot at, kidnapped and subsequently held at gunpoint for four days by local militants. Pretty scary stuff.

“When that all happened it really put things into perspective and made me realise that I had things I wanted to accomplish in life,” Josh explains. “It motivated me to return home to get married and start a family, and also to build a car, which was something I’d always wanted to do.”

So he returned to Australia, married Karen and bought the FJ a week after their honeymoon. When he stumbled across a VS Senator, he relieved it of its engine and gearbox and the rest, as they say, is history.

“In the beginning it was just going to be a stock van with a stock V8 in it but that’s not how it worked out. I guess it just snowballed.”

While this was his first major project, Josh is a mechanic. He who owns and operates his own machinery repair business — Central Machinery Services — and took care of the engine and driveline himself.

He treated the 185i Senator mill to a full rebuild to standard specifications then topped it with a Yella Terra positive displacement supercharger for a healthy 300rwhp, adding a T5 five-speed manual ’box in a custom tunnel, with a nine-inch diff rounding out the powertrain.

Fitting the injected donk required a custom sump and pick-up, a V6 Conversions front end and all the obligatory wiring. With that lot in hand, he completed the job with surgical precision.

The engine bay presentation is superb, with a recessed firewall and custom inner guards, and hours of polishing lavished on the blower and engine accessories to bring them up to scratch. The battery, washer bottle and wiring are all hidden from view, and BMW bonnet locks secure the hood. 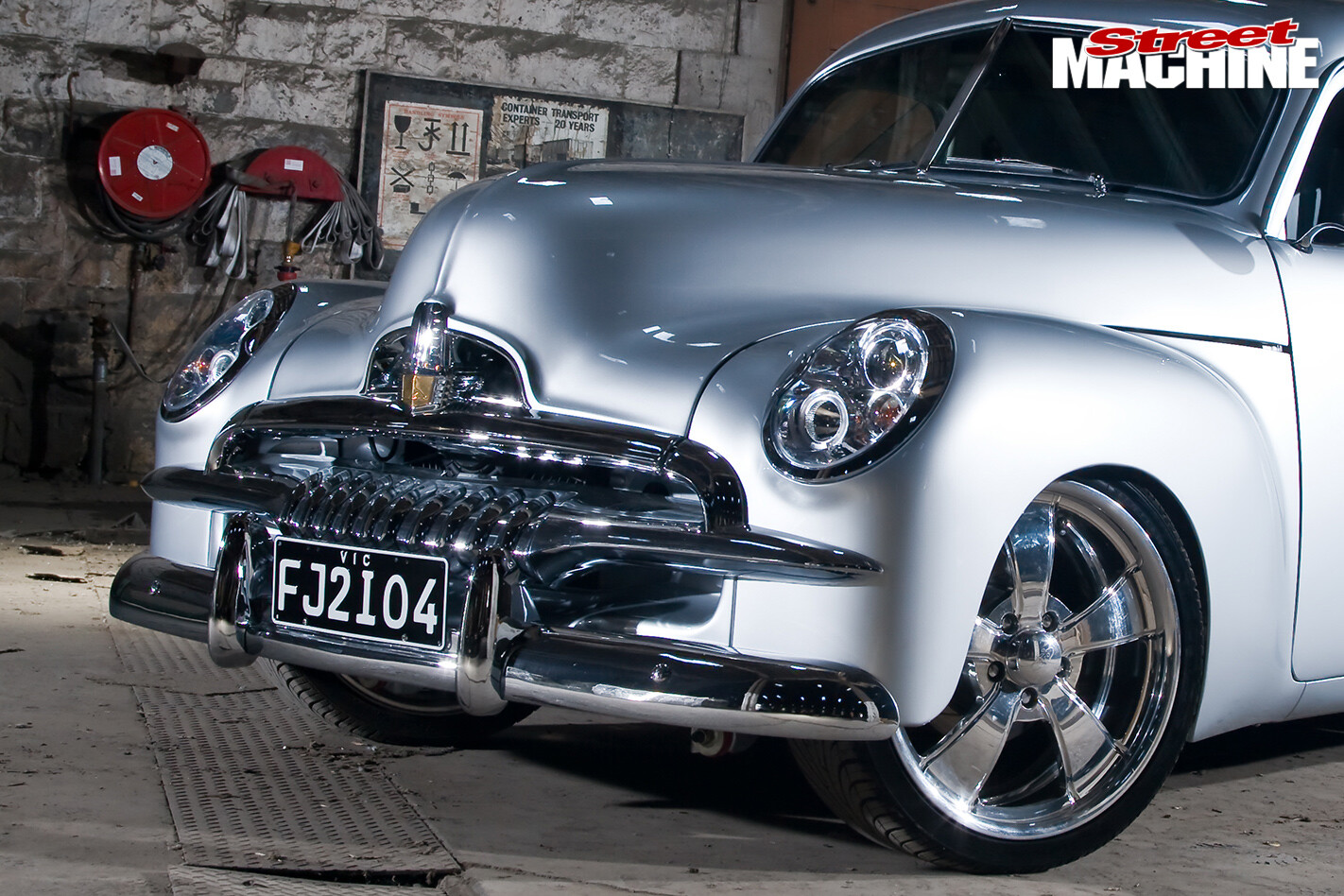 In case you’re wondering about the significance of the custom plates, FJ2104 was Holden’s internal code for the FJ van

You need to spend some time staring at this thing to grasp the full extent of the body modifications and the electronic gadgets that make it so practical yet such a breathtaking modern streeter.

Let’s start with the big stuff. Along with the shaved door handles and remote actuation, the suicide doors feature one-piece fast glass, Corolla window regulators and door locks and billet mirrors — possibly the most high-tech Humpy doors on the planet!

Tail-lights from a ’39 Ford form an unusual rear for the current model Mini Cooper headlights up front. The front and rear guards have been stretched and rolled to accommodate those beautiful Intro V-Rod rollers, and the bonnet flips forward to reveal the brilliant engine bay. The tailgate swings off an HZ Holden top hinge — the handle has been shaved and it’s also electrically operated — while a flip-down panel at the rear of the car reveals a heavy duty towbar. Brilliant! 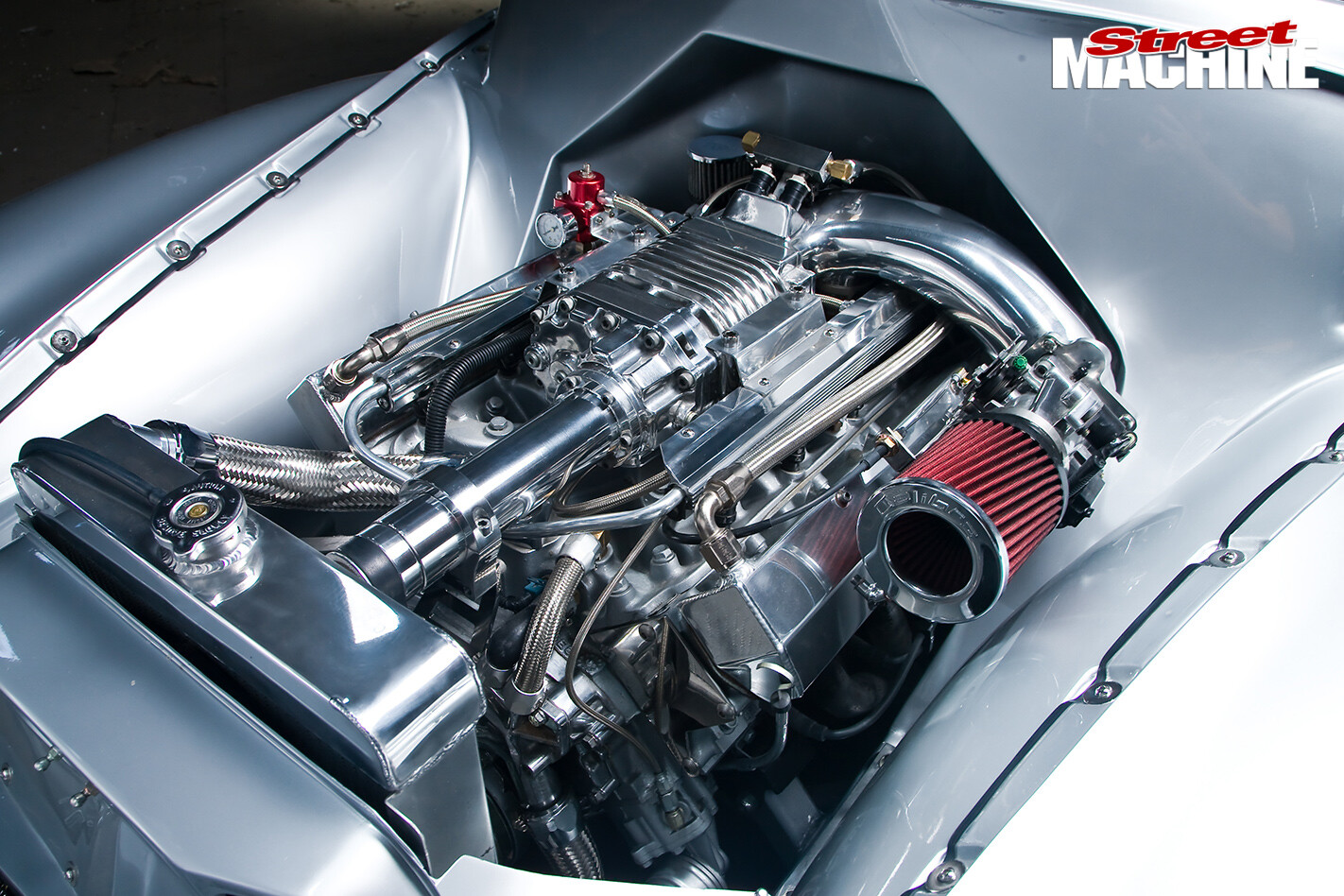 The array of modern gadgetry continues under the car, where Commodore rack and pinion steering is fuelled by a rear-mounted Holden Astra 12V power steering pump, alleviating the need for a belt-driven pump and further de-cluttering the engine bay. A custom pedal box and master cylinders live under the dash, while VH40 and VH44 remote boosters are mounted under the right rear quarter. VS Commodore brakes reside all around, though the handbrake was pinched from a Hyundai Excel of all things! A CRS chassis kit provides much-needed structural rigidity and tramp rods keep a handle on the Pedders rear leaf springs.

Griff’s Trim Shop in Ballarat was responsible for the interior and, according to Josh, the guys there are the go.

“It came in on budget, with time to spare and looking even better than they said it would. Things never go to plan with cars but those boys were going day and night to get it ready,” he says. Examining their handiwork, it’s easy to see why Josh is so stoked. 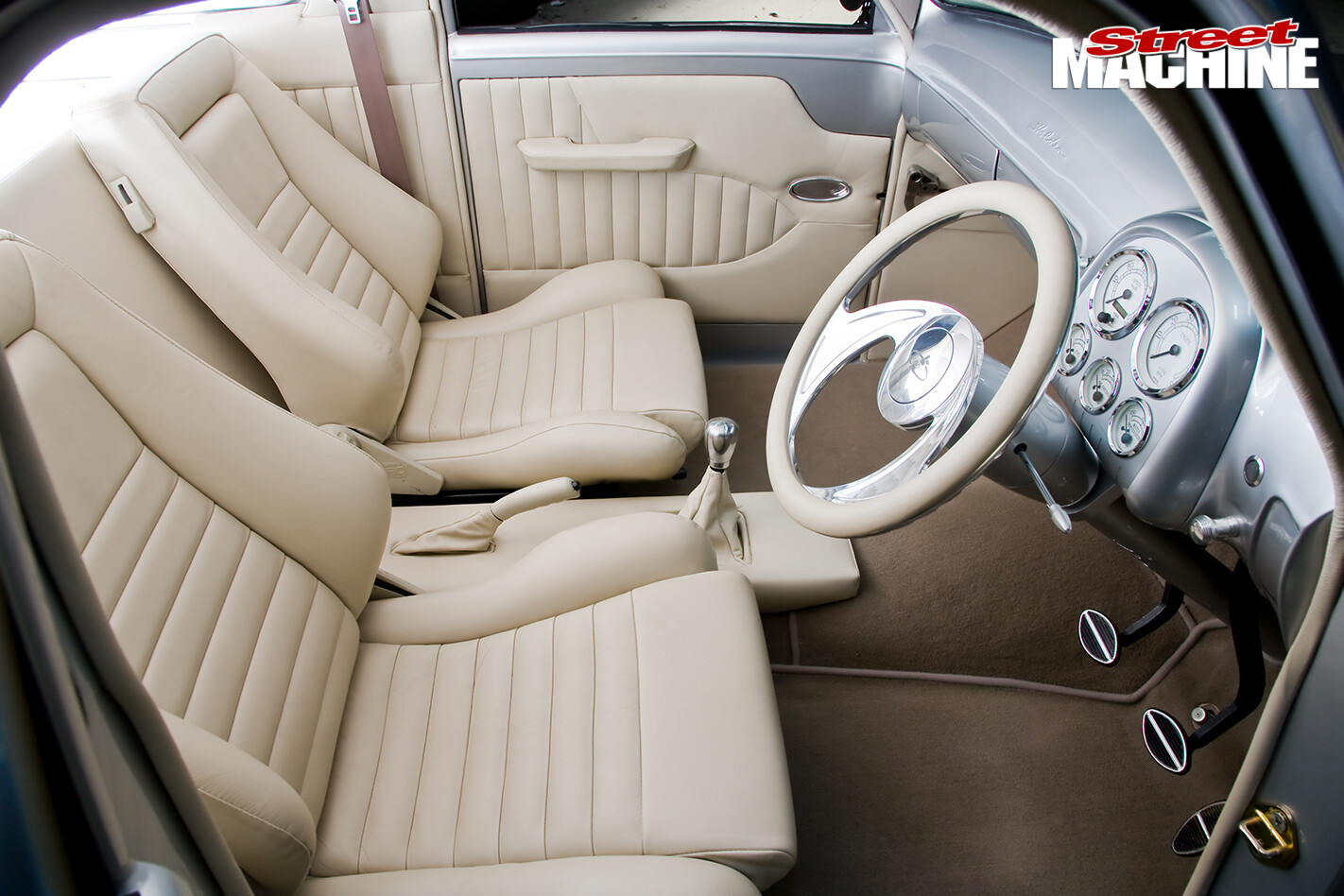 The payload area was shifted 250mm back for increased legroom and is comprised of highly polished Jarrah floorboards. Up front, Latini Driftwood leather covers everything, including the Recaro chairs, custom centre console and door trims, and the rim of the Intro V-Rod tiller. Old-school VDO gauges are housed in a custom fibreglass cluster mounted to the smoothed and painted dash.

Modern niceties include one-touch pushbutton keyless starter, electric windscreen demister and two-speed wipers. Fitting retractable seatbelts was no mean feat — the B pillar had to grow by some 50mm. Perhaps the most important interior features, though, are the child restraint anchors.

“There’s no point having a car I can’t put my kids in,” Josh says.

“Even though I’m a mechanic, I think I bit off more than I could chew for my first build!” he laughs. “When I bought the car, it sat in the shed for 12 months while I fitted the engine, and then I dropped it to LWM Panels at Echuca. They’re three hours away but they’re good so I don’t mind travelling.

“When I dropped it off Karen was pregnant and they told me the car would be ready in three months. Our son is now four and we’re just putting the finishing touches on the car now! Having said that, it wouldn’t be half the car it is now if it was done in that time.”

Considering the high standard of finish, you have to wonder how often it’ll be driven.

“I’ve been trailering it to and from Echuca getting it finished but now I plan on driving it more. I’m driving it to the Van Nats at Phillip Island, which I’m really looking forward to. It may not be an everyday driver but it’s definitely no trailer queen.”